Gregor Hildebrandt: Wo Du Mich Liebst Beginnt Der Wald (Where you love me begins the forest)

Gregor Hildebrandt: Wo Du Mich Liebst Beginnt Der Wald (Where you love me begins the forest)


Perrotin Shanghai presents the first solo gallery exhibition of German artist Gregor Hildebrandt in mainland China. Following the solo booth presented by Perrotin at West Bund Art & Design 2016 in Shanghai, the show indicates the return of the artist to mainland China. Hildebrandt’s newly created signature paintings, along with a large- scale, site-specific installation, transform the exhibition hall into an imaginary forest where sound becomes matter and matter grows into forms. 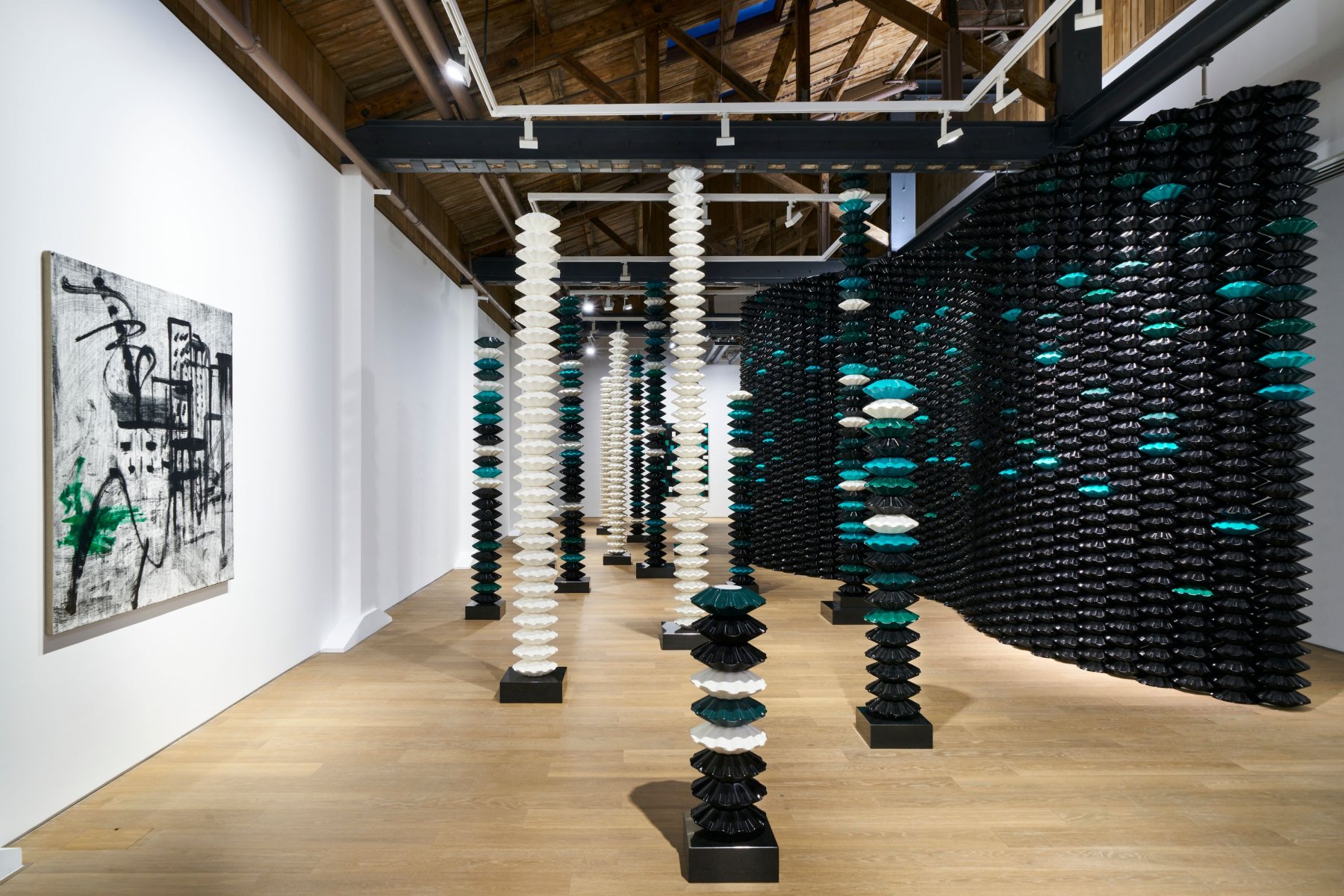 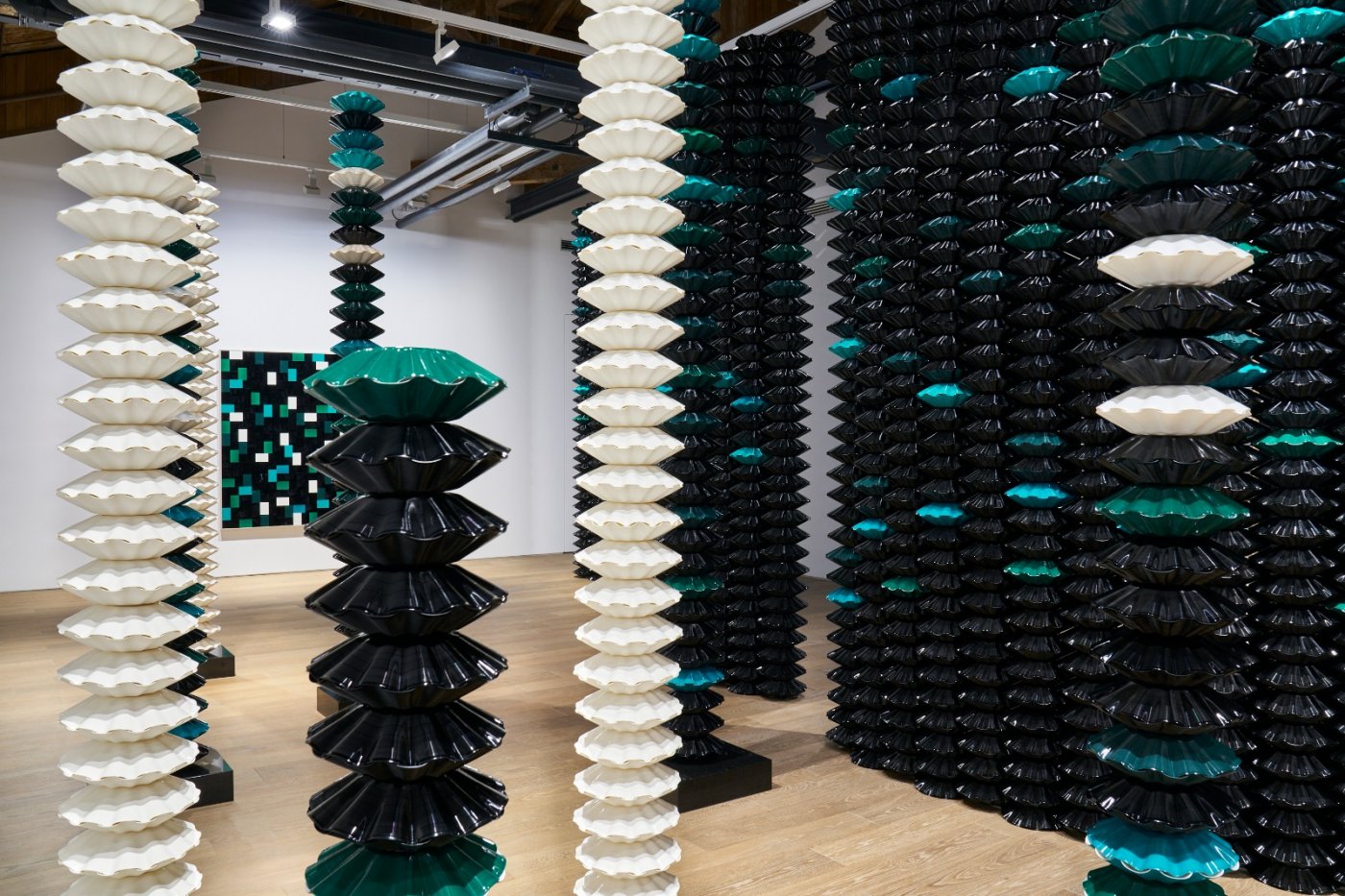 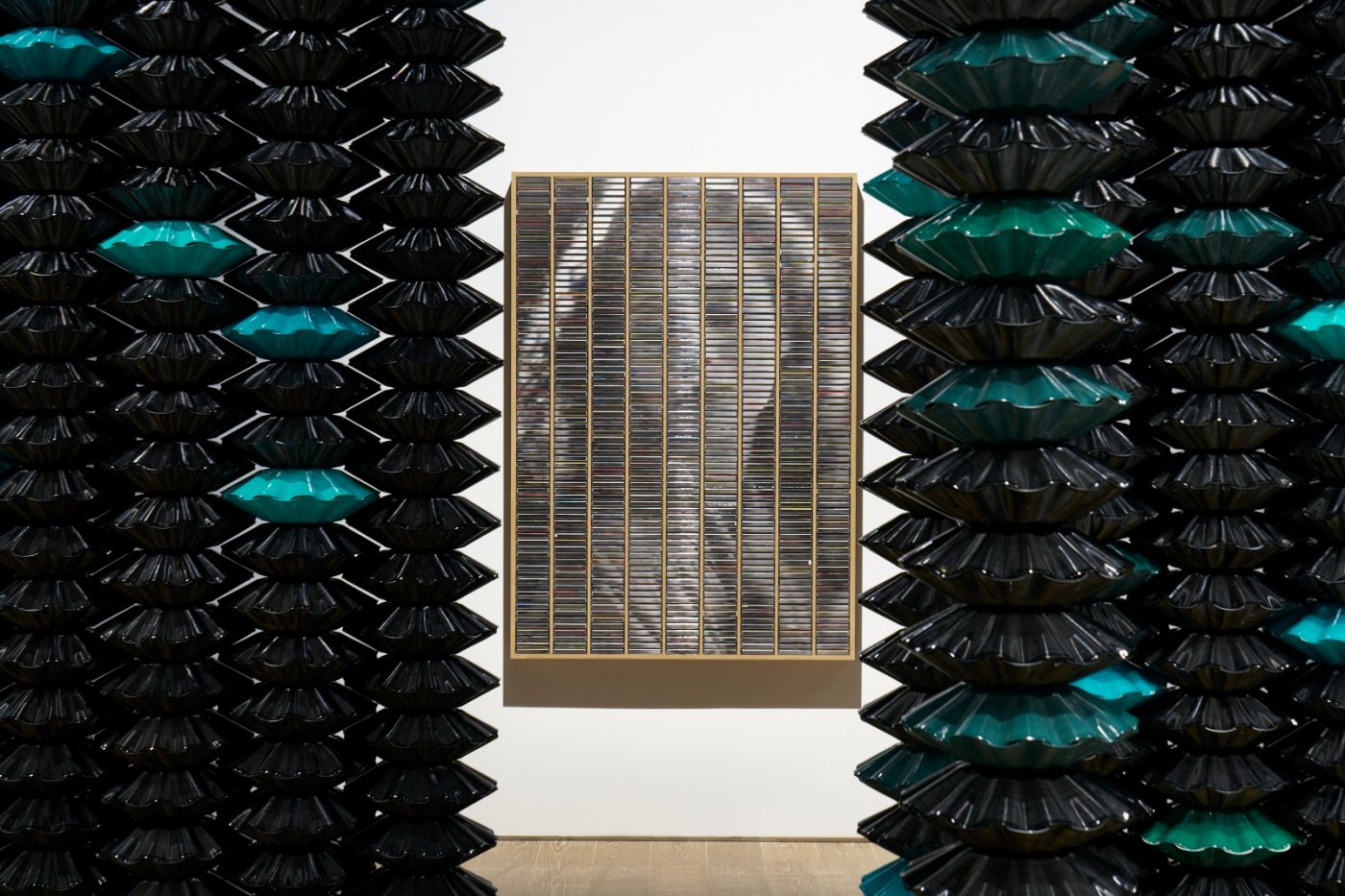 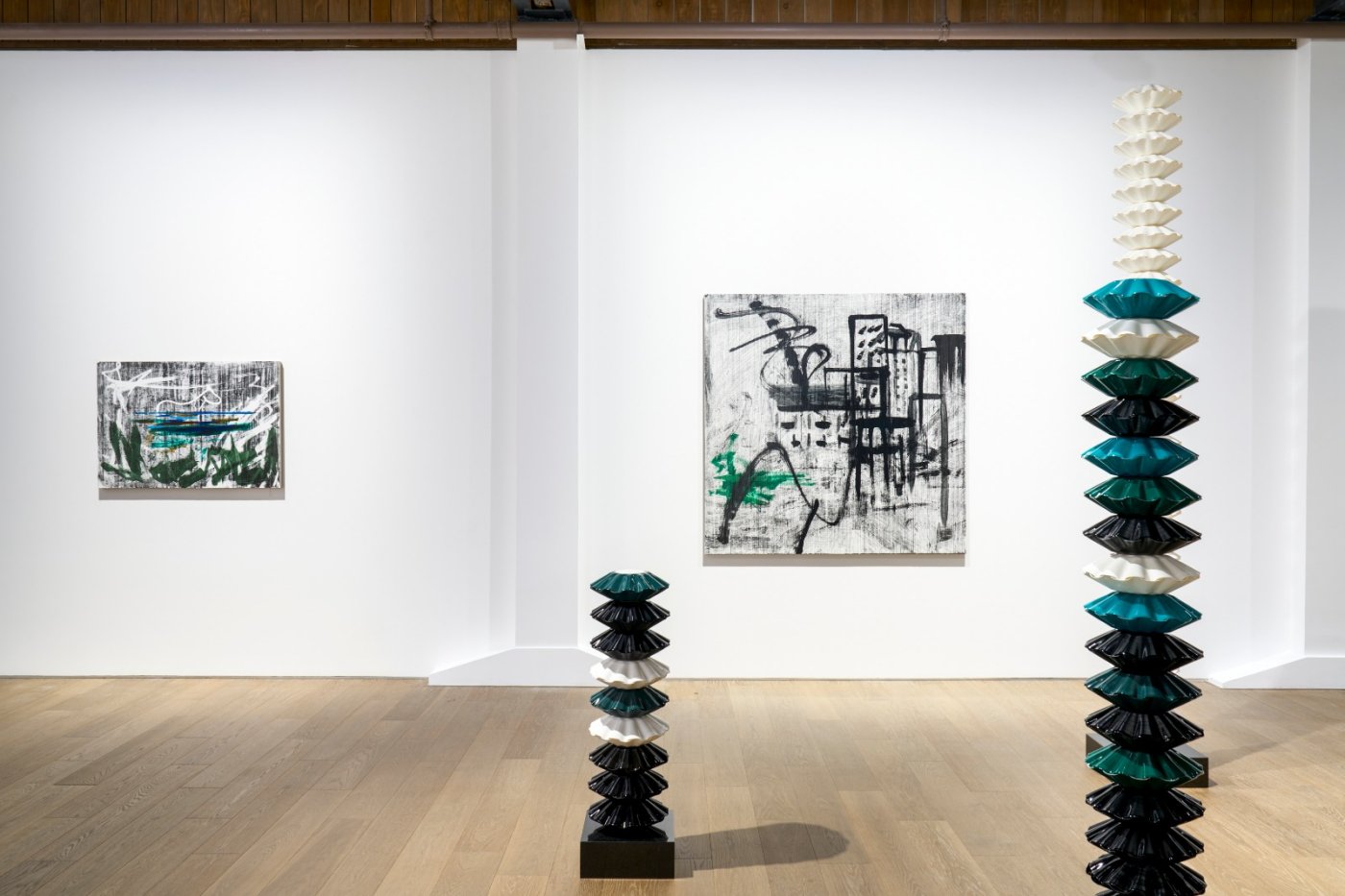 Exploring aesthetic and conceptual possibilities of obsolete recording media, Hildebrandt constructs his visual vocabulary through the usage of vinyl records, audio and videotapes. His creation is always very personal, imbued with a multitude of references drawn from music, cinema, art, and literature he enjoys. Hildebrandt’s monumental collages and architectonic landscapes build up a visceral experience, a song sung in silence. In his own words, they become “a memorial to different songs that are important to me.”

The exhibition’s title “Wo du mich liebst beginnt der Wald,” translated as “Where you love me begins the forest,” is a verse from the song “Dolores” by German band Anne released through Grzegorzki Records.

Hildebrandt and Alicja Kwade founded the label in 2018, testifying their passion for music. In response to the title, poetic references to forest are present throughout the exhibition. From the recurring lyrics in paintings, the overall color theme, to the site-specific installation featuring an array of distinctive record columns and walls, the theme of forest unfolds itself, formulating a unified conceptual impression. The song “Dolores” reappears in the exhibition’s prelusory work Hauch eines Mädchen (Anne, Dolores), through the video clip of the song recorded to the magnetic VHS tape which compose the painterly surface. The video clip is also encoded on the tape in Ein Pferd steht auf im Teich (weiß) (A horse stands up in the pond [white]). The artwork is inspired by Little Blue Horse (1912), painted by Franz Marc, one of the central figures of German Expressionism. The latter painting belongs to the collection of the Saarland Museum in Saarbrücken, where Hildebrandt’s first encounters with art took place. Barely visible upon the first glance, a portrait of Dolores Costello, once known as “the Goddess of the Silent Screen,” is hidden behind the forests. The fragments of the actress’s image are cut and glued on numerous cassette cases, then assembled into a shelf. Exhibited furthermore in the space, the painting Meine Schritte enden resembles a stone floor, which pattern constitutes a picturesque cosmos of cut diverse records. A spectacular installation of columns and walls composed of compression-molded vinyl records turns the exhibition space into a dark wood. For one of the first time in Hildebrandt’s practice, the record walls become slightly curved. The immersive, flexuose structure invites viewers to enter another world from where the forest begins.

If it wasn’t for a friend in the art world, my memory as a former record producer would have slowly evaded me under the passage of time. The era of the record, as I call it, is the era when music was carried on a physical medium. Then comes digital technology, a sharp blade that has divided the music industry into two disjointed worlds, the physical and the virtual. As someone who entered the industry during the vinyl era, I experienced music’s transformation from vinyl records to cassette tapes, tape cartridges, and then CDs and DATs. During the same period, I was also involved in video production in the form of VHS, VCDs, and LDs. The 1990s witnessed the emergence of digital music and the rise of the internet. Music websites thrived after 2000, and gradually gained the upper hand over the recording industry. Veering from physical, discretionary releases, music dived head first into a digital, ‘all-you-can- eat’ era. Physical vessel is no longer a prerequisite for music, since music is always readily available online.

It was an irreversible leap. In the time of physical music, vinyl records and cassettes have two sides. The A-side and B-side together structure a complete narrative. This format not only allows musicians to dwell upon an overarching theme with a specific arrangement of music tracks, but also invites listeners to experience music as originally intended, thus reading into the messages embedded within. And that was how the creator and the audience reached out to each other. In the digital age, however, exchanges as such have long since disintegrated. A song is more likely an output of commercial interest, sprinkled with a few creative sparkles. Data-driven and fragmented, music is rushed to the shelves to satiate our insatiable appetite. The change, I must say, is inevitable after all, and there is no need to lament upon it. Yet I could not help but revel in the discovery of an artist as such—he revives vinyl records, cassettes, and VHS as art mediums, and with a distinctively conceptual approach, he restores the sensory experience and spiritual elevation they once carried. In this day and age, the significance of producing a complete album is often brushed off as Tik-Tok snippets and hit singles become the definition of success. But here he is, recreating the volume, dynamism, richness and poetry of the physical music era with a remarkable amount of artistic sensitivity and imagination.

I have often felt that among literary and artistic creators, artists are the most honest narrators of our bodily experiences. For that matter, they surpass writers and musicians. Whilst words and notes are impossible without rules and standards, art remains open to greater possibilities. Gregor Hildebrandt testifies this belief perfectly. Even though physical music belongs to the days of yore, he still insists upon revealing the value of its material form and, through artistic metamorphosis, touches the heart.

The vinyl records and cassette tapes that once carried the music reappeared before my eyes in artistic form, conveying thoughts and emotions in a profound and tangible way. It is a feeling that words cannot describe. Each piece of work, visible to the naked eye and within the reach of hands, caught the viewers off-guard. It opens the gate to forgotten memories that we once hold dear to ourselves.

Old age has rendered me a runaway from memories, and especially my first 15 years in music industry. That was the time when I collected music albums and video works shelf after shelf at home out of passion simple and true, leaving behind an intellectual and emotional record. In retrospect, I was living in a work of art, an installation of time even. Whereas the contemporary reality we share is one where listening to music is no different from watching a short video, consumed and forgotten in a single swipe. The music continues, but the quality is no longer the same.

In his work, Hildebrandt weaves the black and brown cassette tapes into a sail. The cross-section serves as a ground to walk and dance on. Vinyl records are either shaped into chess pieces or pieced together into walls. When music is dematerialized, uploaded to the cloud, and dismembered for quick buys, Hildebrandt restores music to its material form in reticence. It is a powerful silence and an embodied presence that recalls, moves, and inspires, ready to set sail.

Kindred spirits are connected through great artworks. Hildebrandt’s creation is at once a sail and a painting, strumming the chord deep inside me.

About the artist
Gregor Hildebrandt was born in 1974 in Bad Homburg, Germany, now lives and works in Berlin, Germany. His signature media are cassette tape and vinyl, which he collages and assembles into apparently minimalist yet latently romantic paintings, sculptures, and installations. Resting in silence behind the glossy surface of his analog aesthetics, which verges on black and white monochrome, music and cinema haunt his practice. Whether pictorial or sculptural, all of his works contain prerecorded materials, which he references in the titles. These pop-cultural sources, usually a single song, are meant to trigger both collective and personal memories. Like analog storage media, his distinctive rip-off technique is a metaphor for the mnestic process itself: it consists in rubbing magnetic coating against double-sided adhesive tape stuck on canvas to trace intricate and elusive powdery patterns. Further relating to architectural Gesamtkunstwerk, Hildebrandt’s monumental sonic barriers made of stacked, bowl-shaped records and his sensual wall curtains made of unreeled tapes create paths for the visitors of his shows.

View of Gregor Hildebrandt's exhibition "Wo Du Mich Liebst Beginnt Der Wald (Where you love me begins the forest)" at Perrotin Shanghai, 2022. Courtesy of the artist and Perrotin