For his first solo exhibition at the gallery since 2012 – and first exhibition at Victoria Miro Mayfair – Grayson Perry presents new work including pots, sculpture, large-scale prints, a tapestry and a carpet. 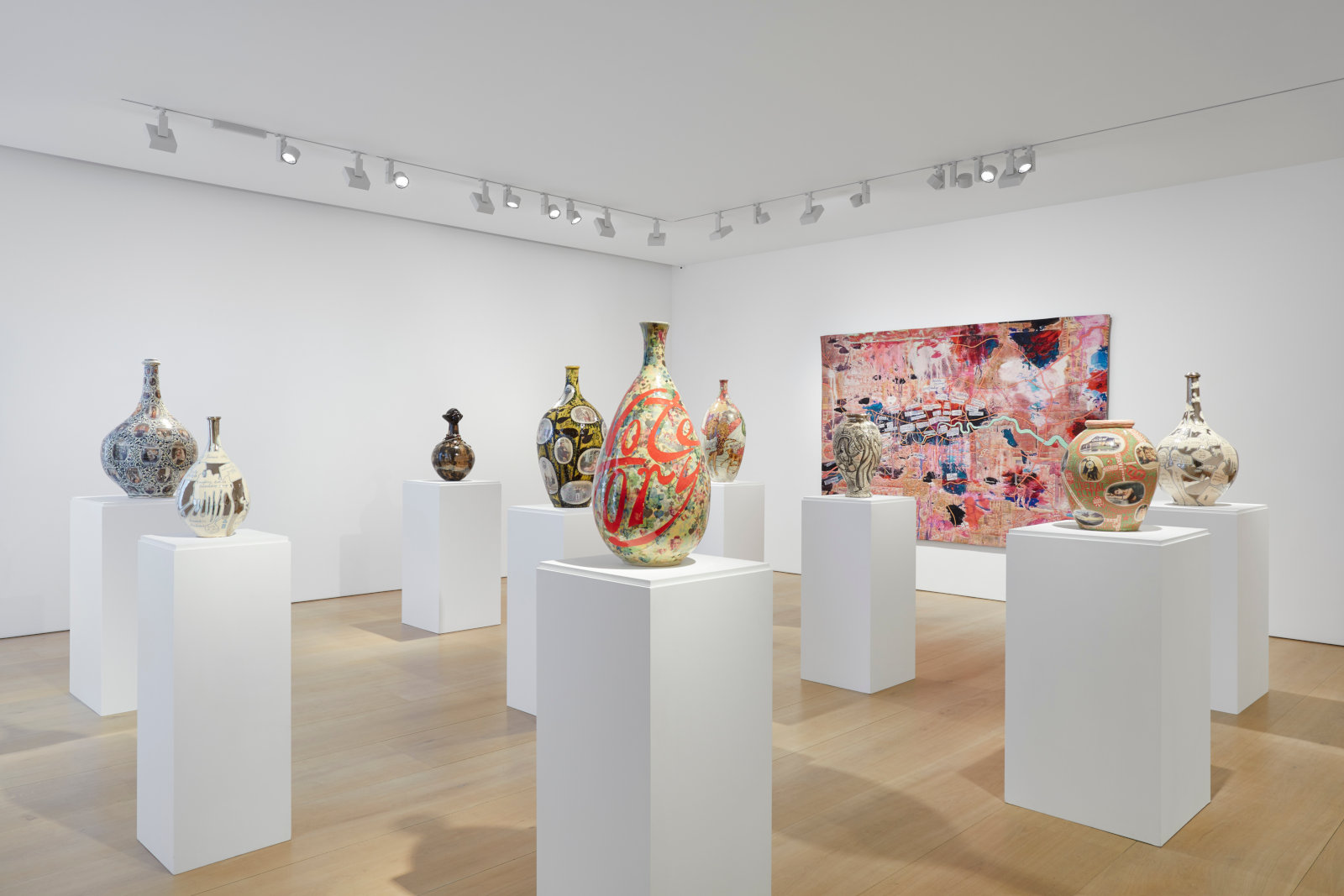 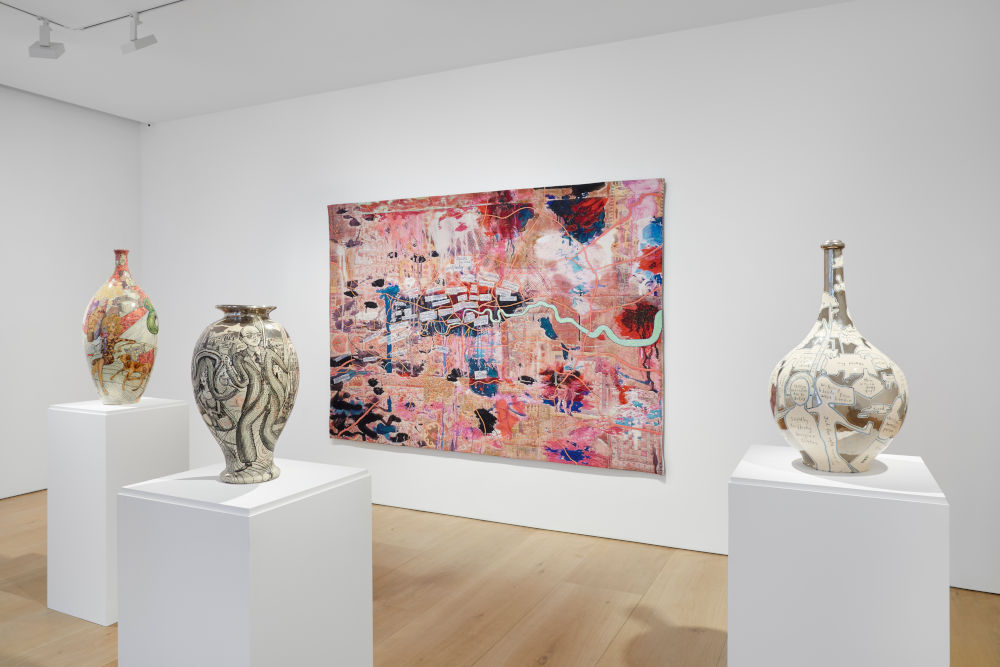 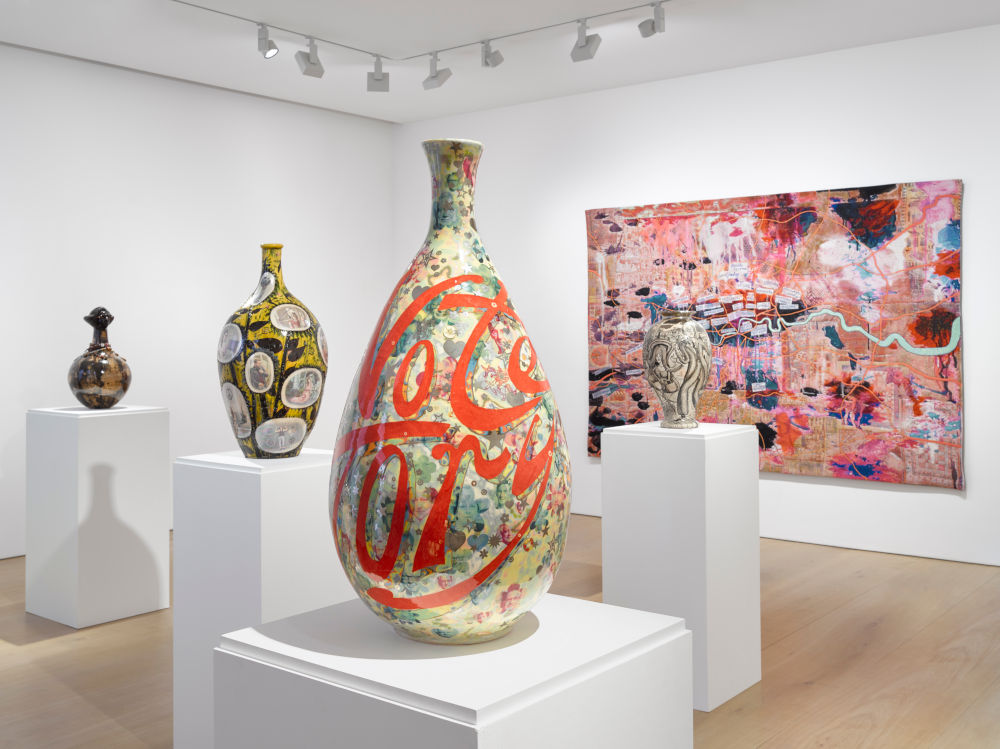 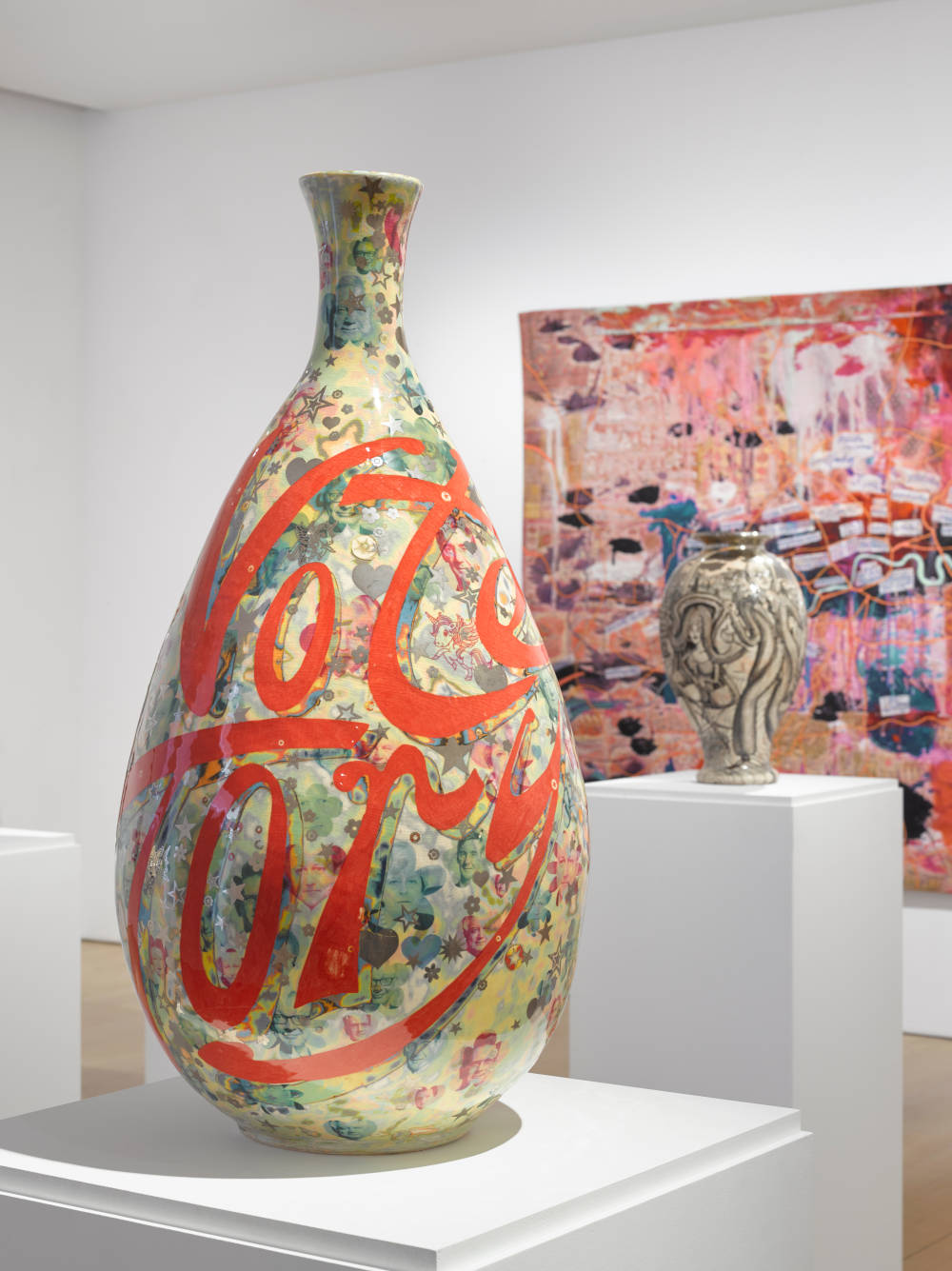 In these new works, the artist casts an anthropological eye on the heady collision of art, money, power and desire. The assertion of identity through cultural or consumer choices and what these reveal about us, perhaps unintentionally, is one theme of a show that broaches the slippery concepts of meaning and significance – what can be authentically experienced or simply acquired. New pots include Shopping for Meaning, adorned with images of the artist – in wig, headscarf and various outfits – standing in front of Mayfair’s designer stores, their logos visible behind him. Searching for Authenticity collects together symbols of rebellion and rites of passage – the leather jacket, the beard, the CND banner – as if they were a catalogue of lifestyle choices. Fittingly slender in form, Thin Woman with Painting depicts an immaculate contemporary art patron at home with her collection which, on close inspection, includes works remarkably similar to Perry’s own: a pot bearing the names of philosophers and theorists, and a tapestry of an urban landscape featuring words and phrases such as ‘appalling wifi’ and ‘cultural desert’.

Very Expensive Abstract Painting is a tapestry that, bearing some of the hallmarks of twentieth-century abstraction, is also a map of London – traversed by the familiar serpentine form of the Thames and containing words that appear to chime with their corresponding locations (the area to the south of the city simply reads: ‘organic’). Polarities of wealth are brought into focus in a carpet, titled Don’t Look Down, which, at its centre, depicts a homeless person in crucifix-like pose bordered by a frieze containing images of domestic architecture.

Opposing political affiliations are set on a collision course in two outsized woodblock prints: Selfie with Political Causes, 2018, which shows the artist riding a motorbike surrounded by fluttering right-on slogans; and a new companion piece, Sponsored by You, which depicts Perry and Alan Measles taking a spin in a sports car powered by an engine labelled ‘pure greed’ through a landscape festooned with the names of global tax havens. While in Selfie with Political Causes a fox labelled ‘Tax Evasion’ becomes roadkill, in the new work a rabbit – ‘Social Mobility’ – finds itself a victim of unfettered capitalism. The car’s brakes, meanwhile, are labelled ‘guilt’ – perhaps the only thing that might stop it.

For the first time, this exhibition sees Perry working with material from the photographers Richard Young and Martin Parr and Eleni Parousi. Celebrity photographer Young, whose work since the 1970s has chronicled the party-going glitterati, has provided the images for one pot. Given access to Parr’s archive, Perry has selected images of the well-heeled at leisure for Money on Holiday, a table lamp which also features the names of tax havens such as Panama, Cayman Islands and Isle of Man. Parousi’s photographs of Perry, in situ in Bond Street and Mount Street, feature on Shopping for Meaning.

During the making of the work Perry had in mind Nam June Paik’s famous quote that ‘the artist should always bite the hand that feeds him – but not too hard.’ While some of the works appear to goad the wealthiest in society, indeed the very people who might collect contemporary art, richness here might refer to a profusion of decoration and abundance of reference as much as affluence.

Perry has also produced a handbag in collaboration with Graeme Ellisdon, of Osprey London, which will be on view as part of the exhibition.