Alison Jacques presents a solo exhibition of new work by Graham Little (b. 1972, Dundee, UK), on view in the Upstairs Gallery. The exhibition follows the publication of Inside the water sleep (2019), a monograph featuring essays from Martin Herbert and Laura Smith, and coincides with Little’s inclusion in ‘Mixing it Up: Painting Today’ (9 September–12 December 2021), a major survey at Hayward Gallery, London, curated by Ralph Rugoff. 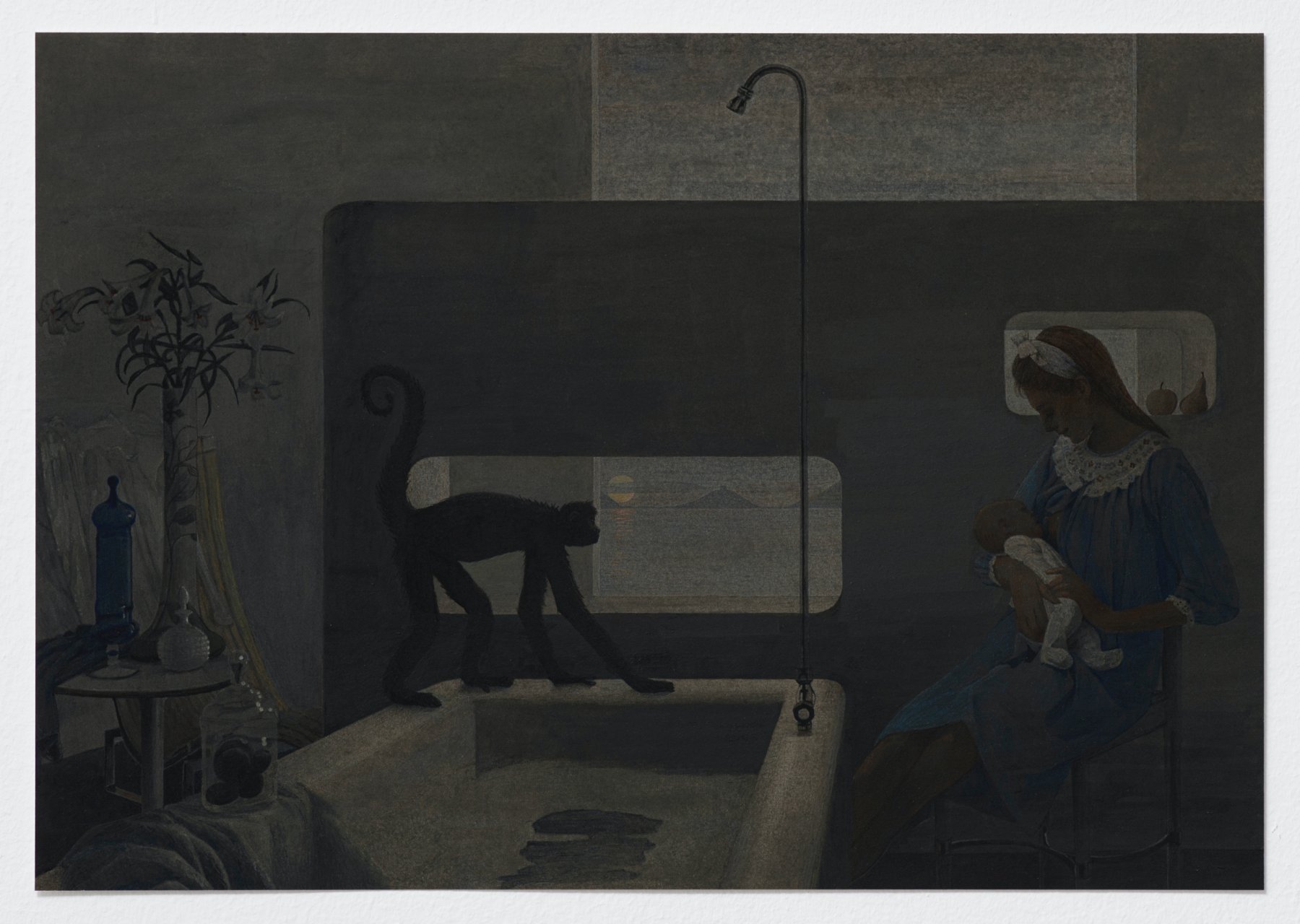 Graham Little’s compositions – often domestic, often dreamlike, always delicate – ask what it is to live in relation: to oneself, one’s companions, one’s era; to the felt qualities of the physical world. With this new series of vignettes on paper, many of which took years to build from conception to completion, Little adopts the aesthetics of fashion photography and Baroque grandeur to set in place a series of tense oppositions, each of which is combined in just balance: beauty and decay, emptiness and presence, animate bodies and the spaces they occupy. ‘There is the surface of things’, writes critic Martin Herbert of Little’s work, ‘and then, as uncovered with the passage of time, what lies behind.’

Throughout Little’s new works, solitary figures languish in their distraction: their eyes are distant, their minds elsewhere, their palms laid flat against surfaces. In Untitled (Ladder) (2020), a woman in stonewashed jeans runs her hand across a fresh roll of wallpaper; in the melancholic Untitled (Mother and Baby, dusk) (2020), a mother in Baroque clothing curls her fingers around her breastfeeding child. If to touch is to measure oneself in relation to the physical world, Little has assembled a solitudinous cast in apparent need of reconnection – a familiar yearning, following an extended period of social isolation and digital communication. ‘It’s that felt sensuality of the world’, Little says of the collective desire of his subjects, ‘a world that used to be primary but nowadays feels secondary.’

And beneath these hands, the diversity of patterns, fabrics and textures that have come to characterise Little’s studies of occupied space. Pastoral landscapes, whether frontward-facing or glimpsed through frames, are rich and deftly layered. Internal scenes, contrastingly, are monochrome and orderly in form, dulled by a sterile flatness. Through this treatment of surface, Little resurrects the storied dichotomy between nature and nurture and issues a heartening reinvestment in the tactile brilliance of the outside world – something that, in the case of Untitled (Mountain) (2021), flees from a cavernous window. (‘Through the poet’s window’, writes Gaston Bachelard, as if responding to Little’s treatment of the internal and external divide, ‘the house converses about immensity with the world’.)

That so much of Little’s work is founded upon below-surface tension is exemplified by the inclusion of Untitled (Squirrel) (2021), a tender depiction of a dead mammal framed by a series of delicate threads. While the artist’s chamber scenes might be read as measured attempts to process the difficulty of beauty, to indulge in and interrogate its seduction, his post-mortem studies represent more visceral responses to its fundamental insufficiency. We dress ourselves and our surroundings to obscure the sole truth of life: that it comes to pass. But when faced with this truth, we are predisposed to discern within it, impose upon it, a certain degree of beauty. It is both an act of aesthetic self- denial and a gesture of purest humanity – the dichotomy of beautiful things in a squirrel at rest.

Graham Little has had numerous solo exhibitions at Alison Jacques, London, since they first began collaborating over 20 years ago. His work has also been included in numerous museum shows at such institutions as V&A Dundee (2020); Somerset House, London (2020); The FLAG Art Foundation, New York (2019); Kunstmuseum Bochum (2017); Manifesta 11, Zurich, curated by Christian Jankowski (2016); and MoMA PS1, Long Island, New York, where he featured in ‘Drawing Now: Eight Propositions’ (2019), curated by Laura Hoptman. In 2022, he will have a solo show at Taka Ishii Gallery, Tokyo, his debut exhibition in Asia.