James Cohan presents STEPS, an exhibition of new work by Grace Weaver. The exhibition spans both of the gallery’s locations, with a body of new paintings in Tribeca and a selection of the artist’s drawings in the Lower East Side. This is Weaver’s second solo exhibition at James Cohan. 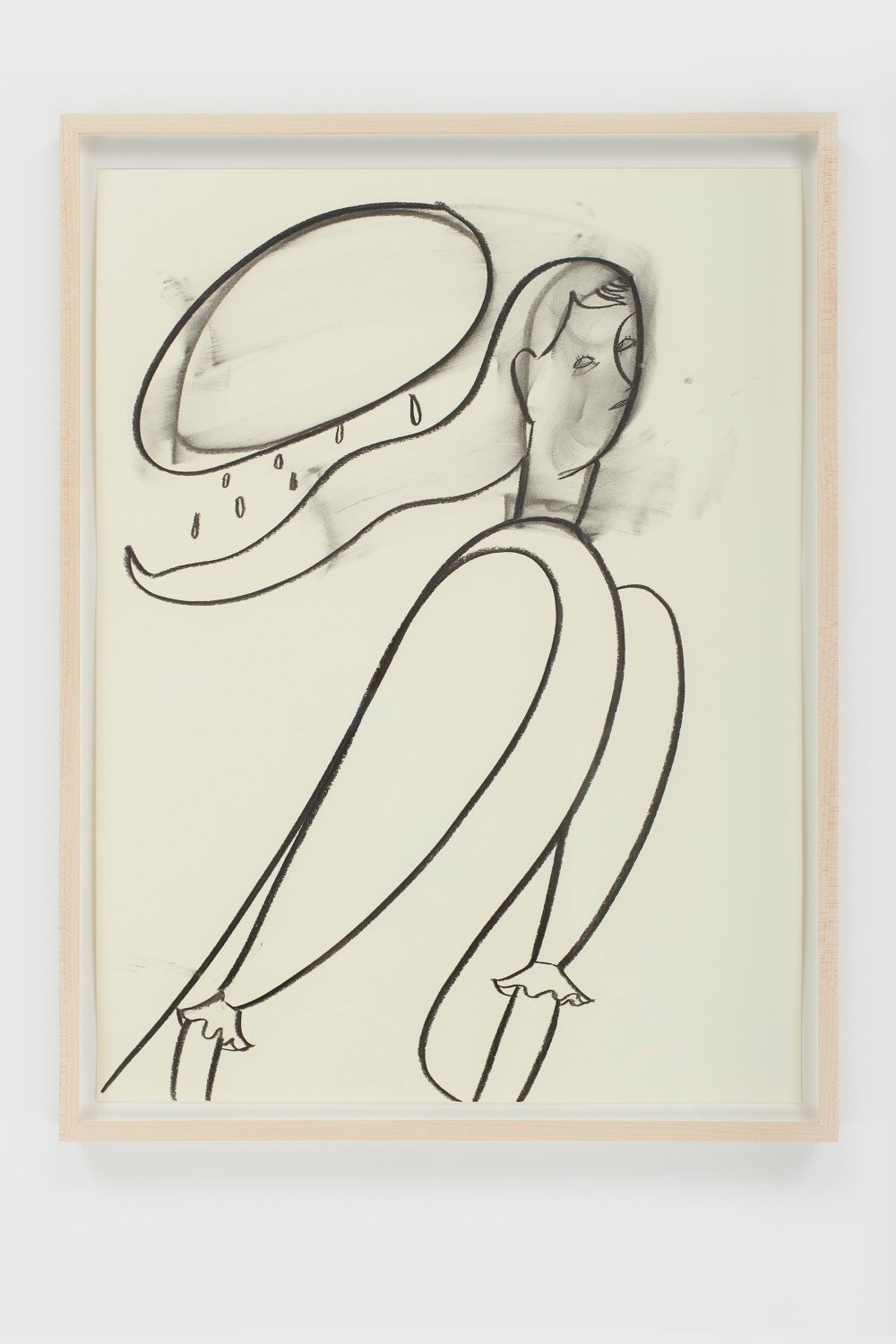 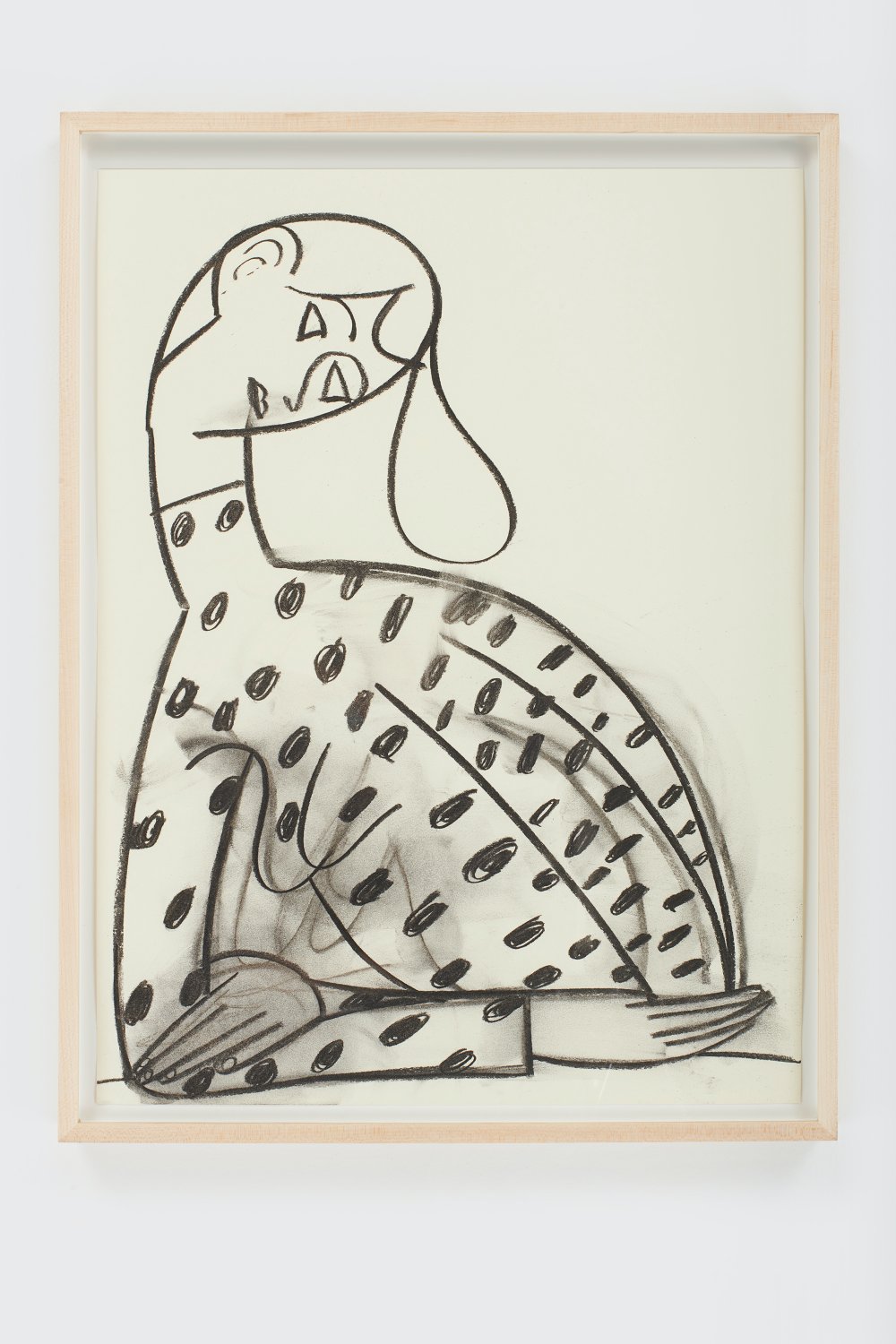 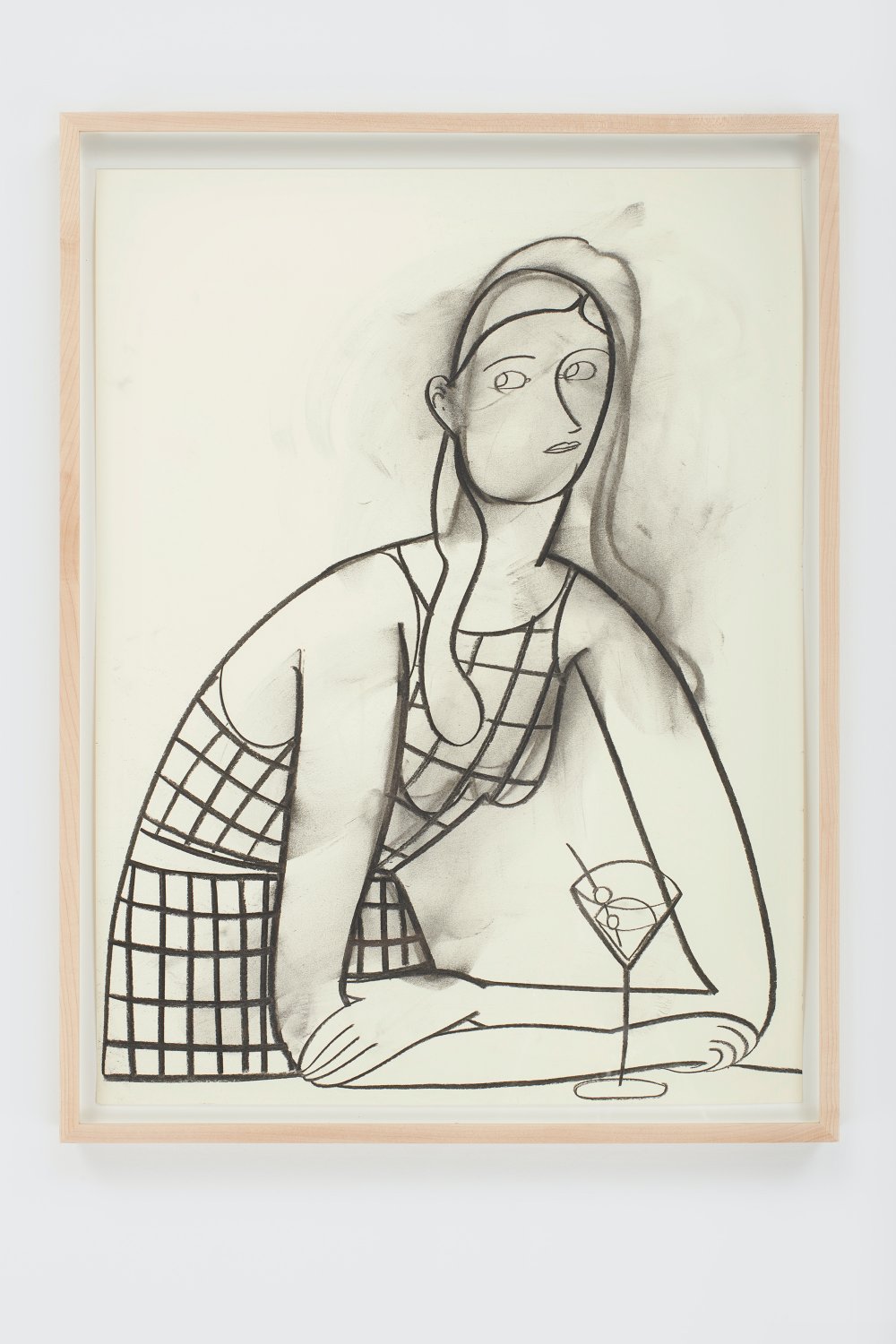 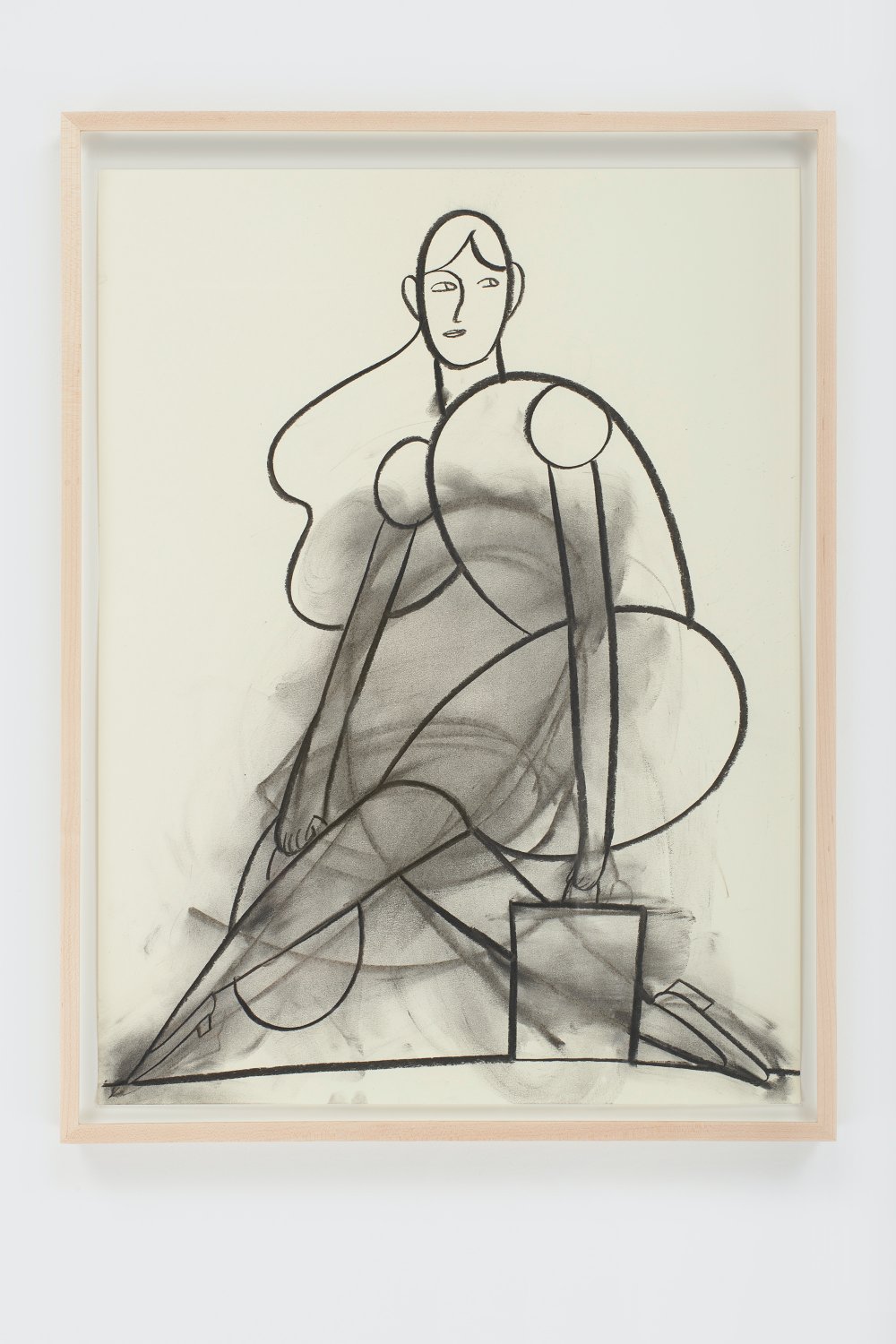 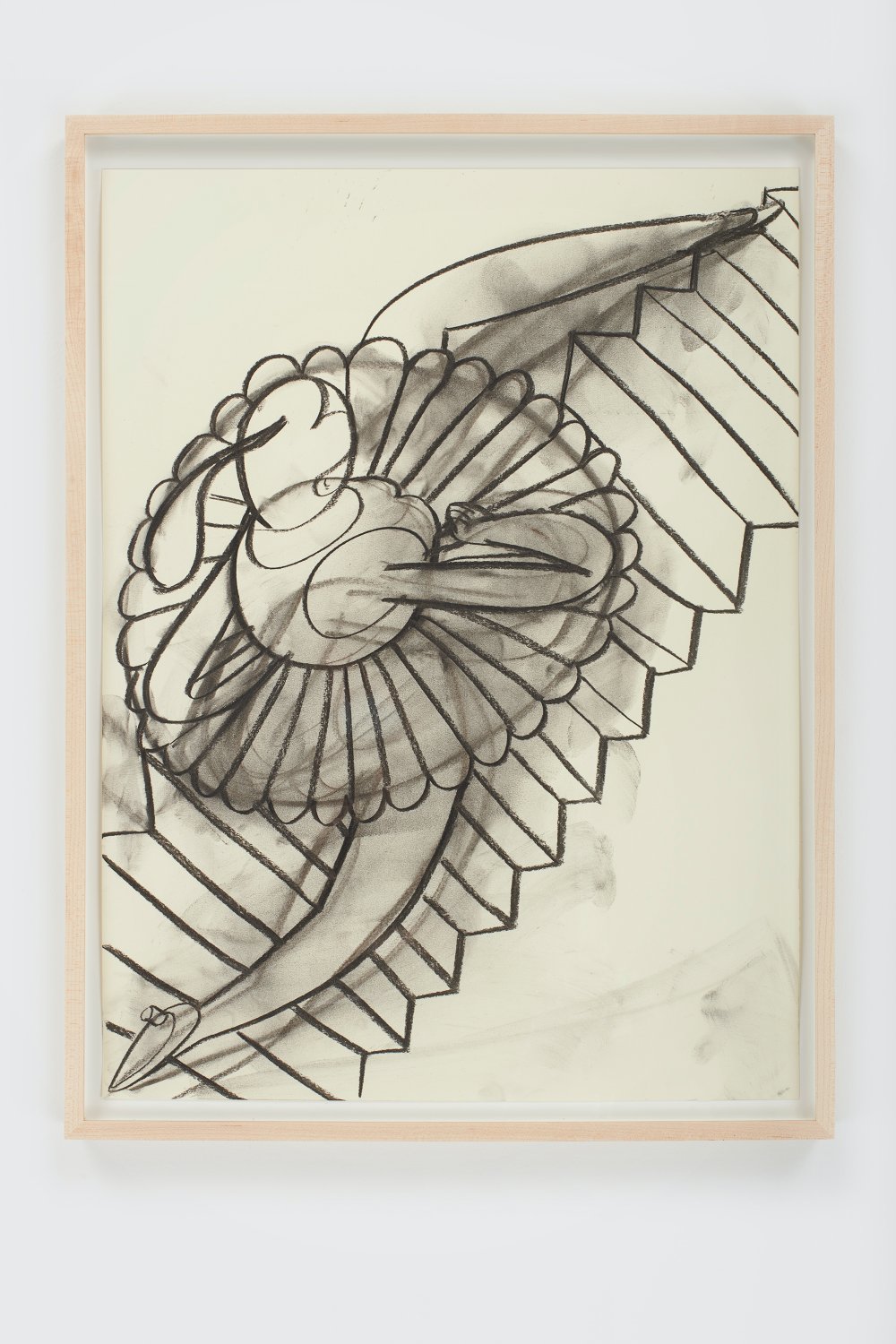 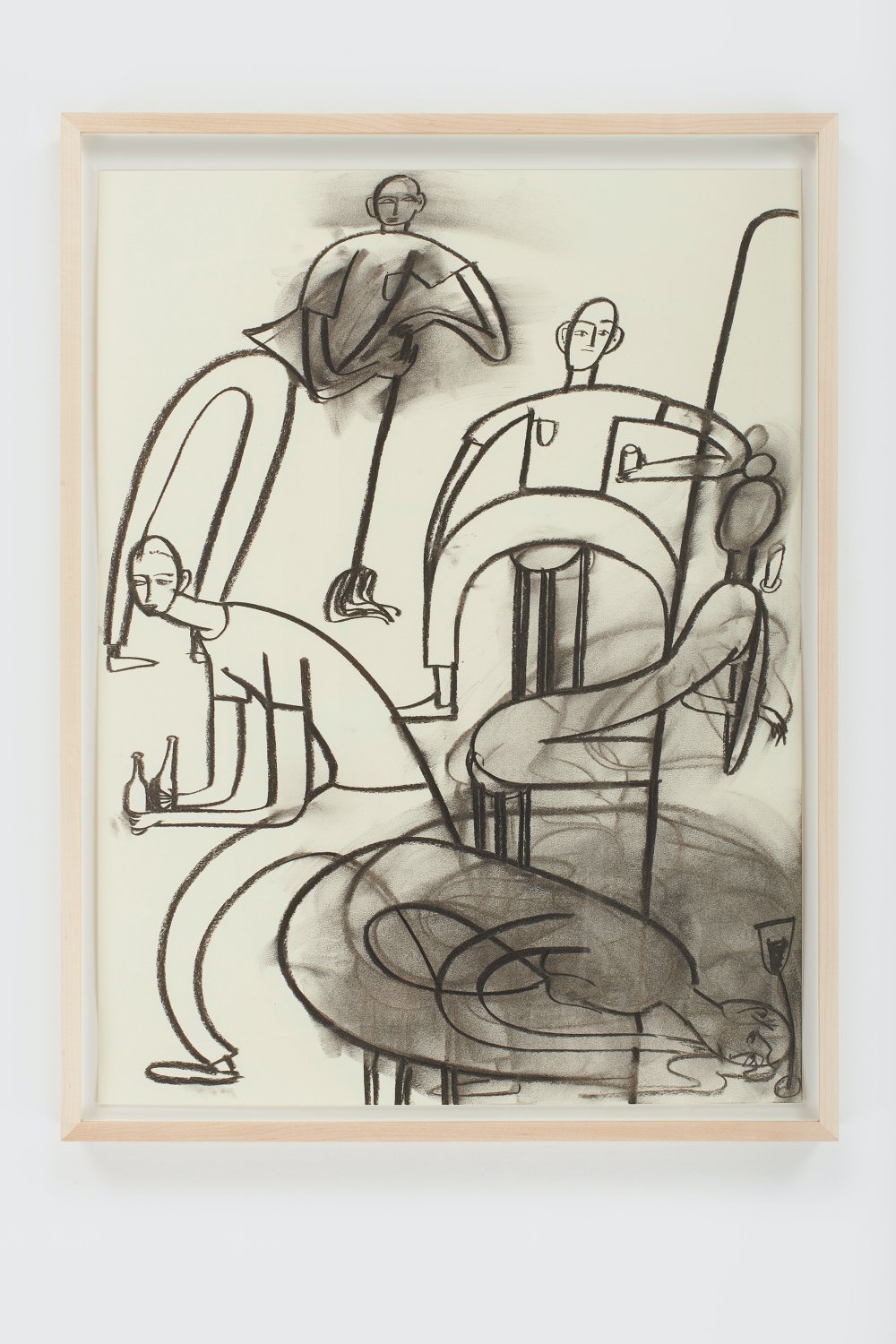 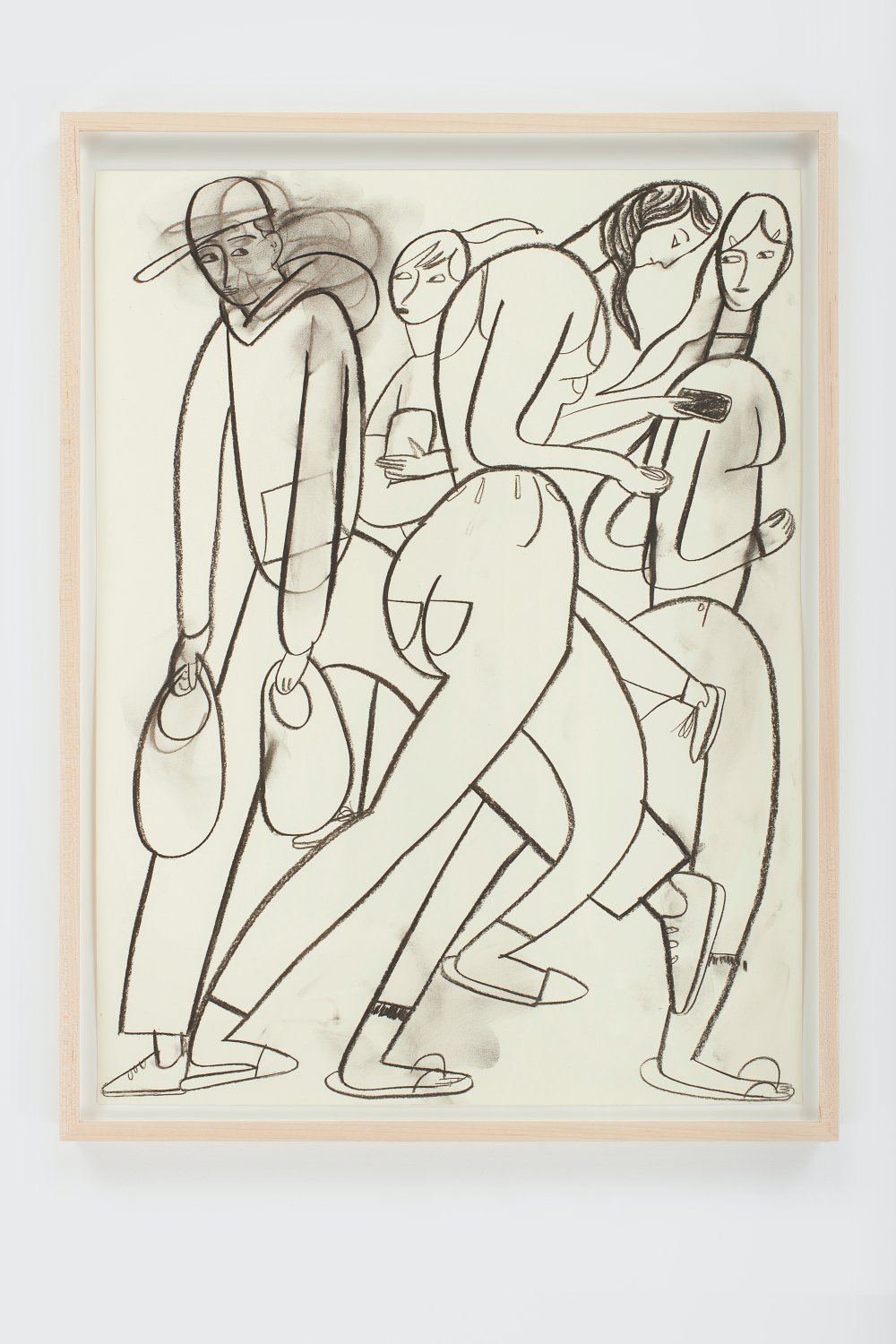 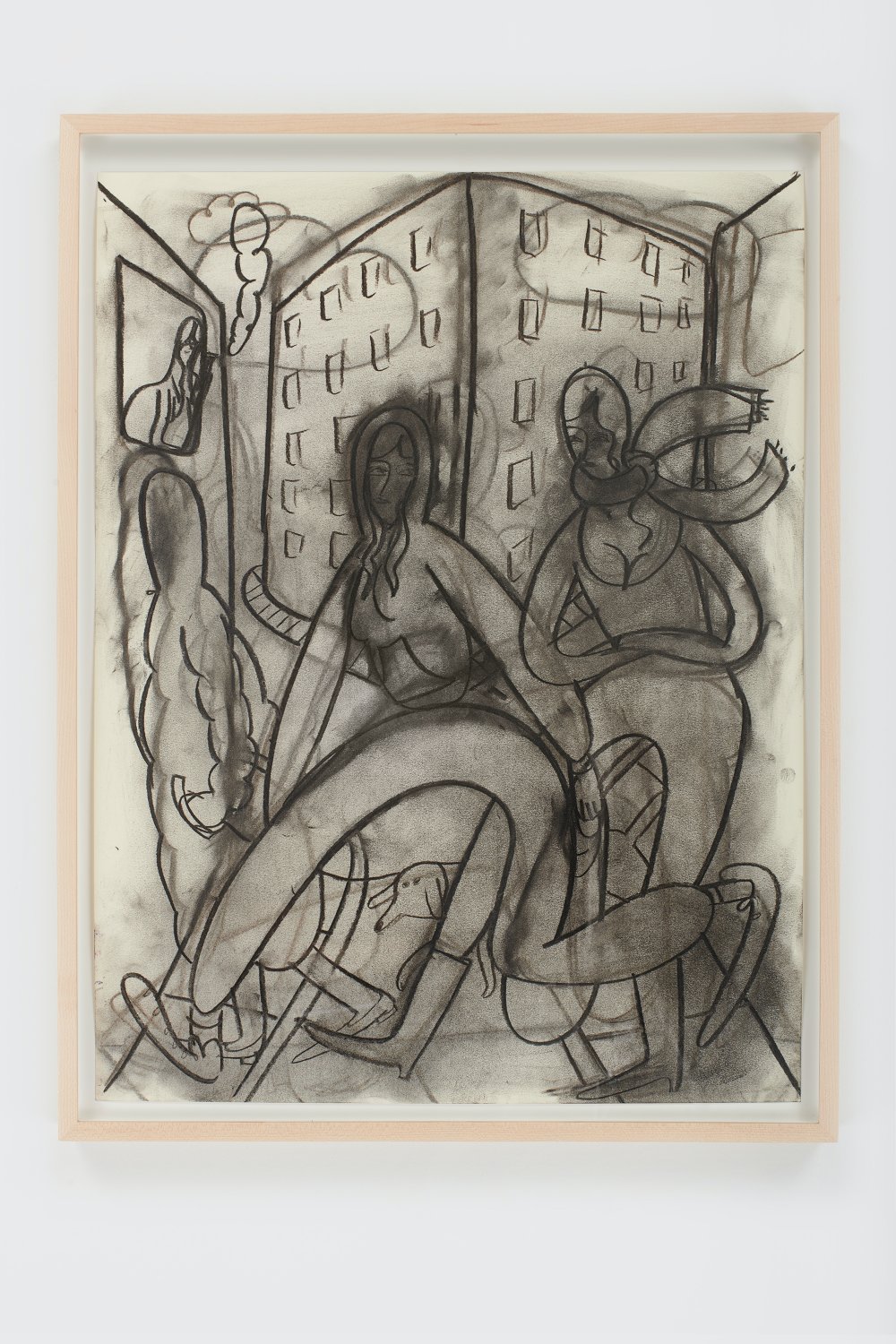 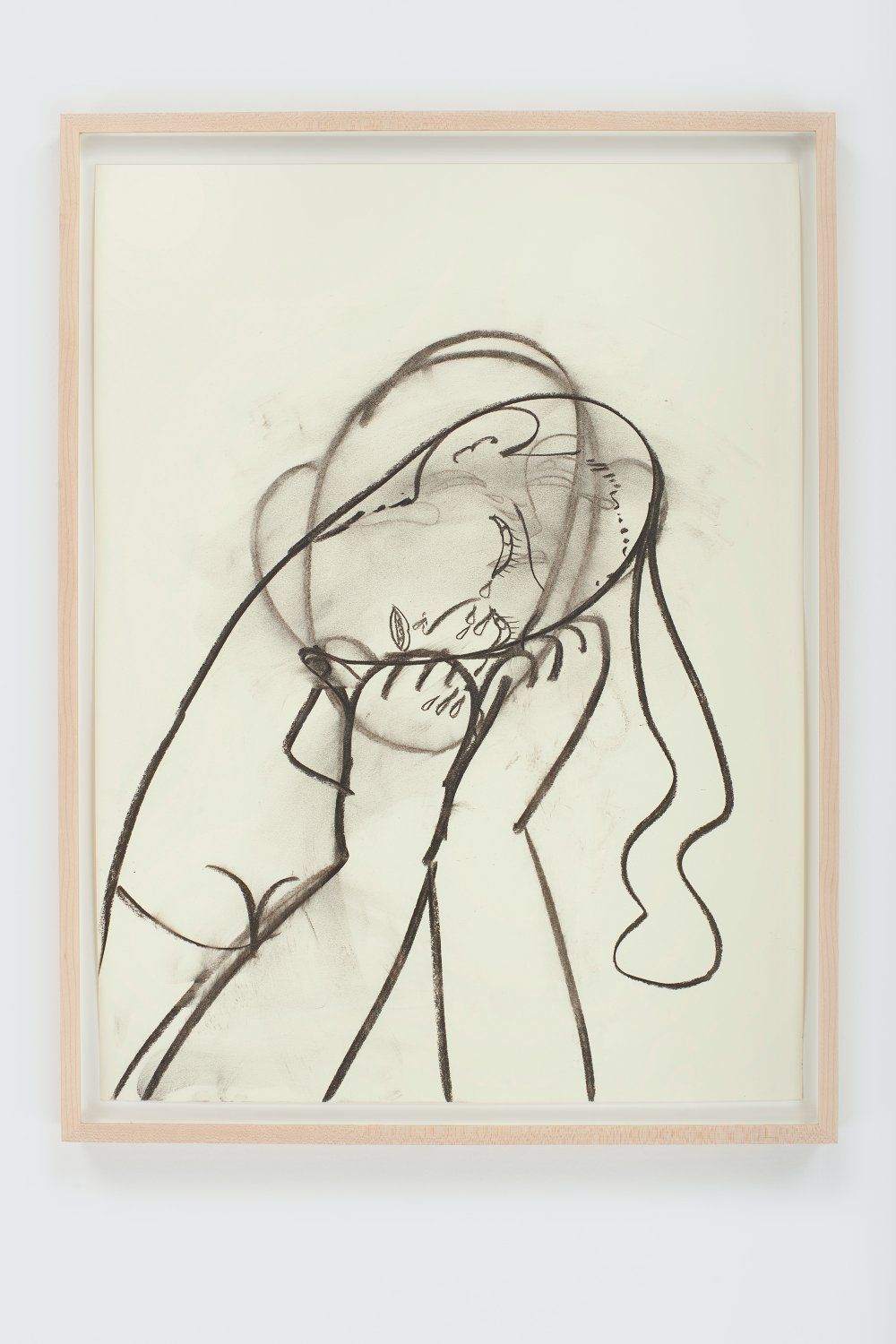 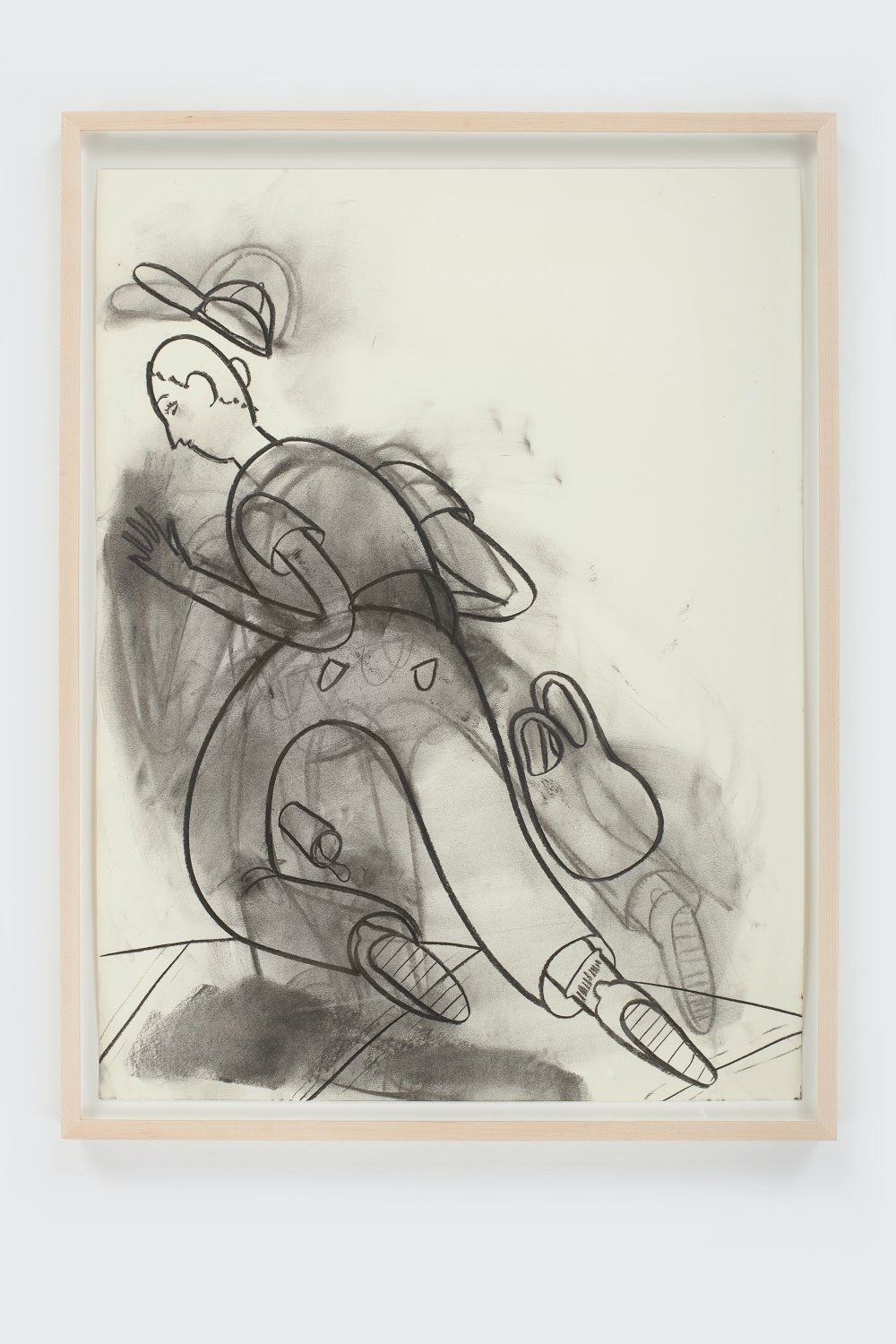 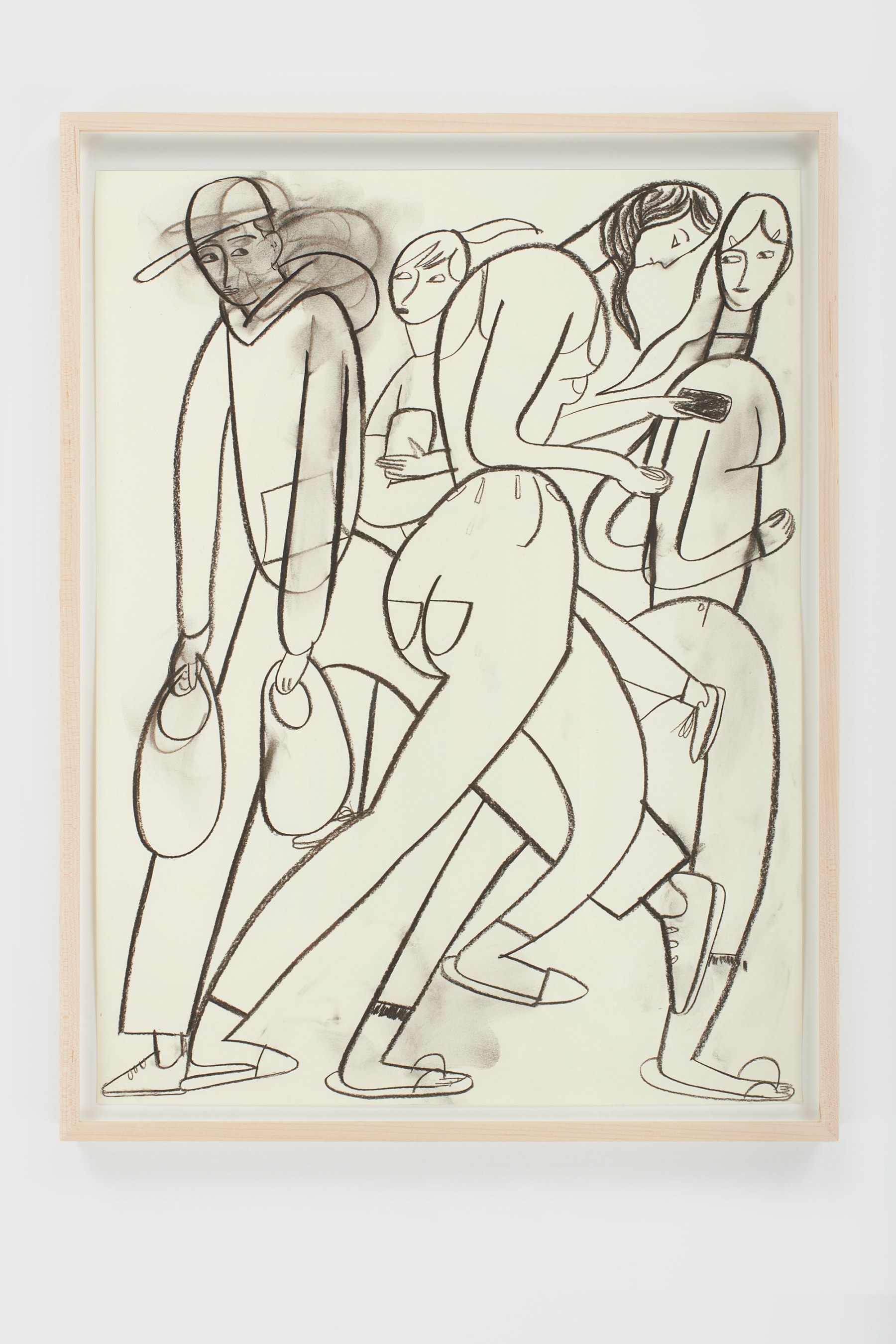 In her striking portrayals of the tragicomic everyday, Grace Weaver examines the charged social and cultural conditions that underlie self-concept, intimacy, and individual experience. Depicting elastic-limbed figures that collide on street-corners and tumble down steps, Weaver’s new paintings turn an incisive yet empathetic eye onto the self-conscious performativity and precarious footing of her contemporaries. In her work, the body itself becomes scenario: playful, sweeping lines and dense planes of luminous color act as linguistic elements, each directing its own physical weight and affect onto her female subjects.

Weaver’s paintings are an exploration of what she terms a “theater of public life.” In Confrontation, as with her other street scenes, the sidewalk serves as a stage upon which interpersonal dynamics and power struggles are played out. In this work, two pedestrians tangle in a head-on collision at a street corner that could be an enthusiastic reunion or a violent altercation. Alienation versus belonging, cruelty versus connection—the pains, pleasures, and anxieties of everyday existence are writ large in this collective space. Weaver playfully explores the contradictions embedded in this social fabric: who has power, who is powerless; who is revealed, and who is hidden from the gaze of the viewer. These scenes allow her to build an audience within the painting, creating a chorality within the picture plane. The cast of characters, like Weaver, are as much subject to performing a strata of social anxieties as they are to wryly observing them.

Drawing upon ideas of up and down, or forward and backward, Weaver manipulates spatial binaries in her work—either complying with their connotations, or distorting them with plays on perspective. The heavy, directional tears within two paintings entitled Crying (I, Upwards) and Crying (II, Downwards) convey divergent subtexts of sadness: one figure is ecstatically performative, while the other, according to Weaver, might be performing “what she thinks is sympathetic in a drippy lugubrious way.” The use of the art-historical devices of gravity and directionality are central to the emotional narratives suggested in her work: another painting depicts a crowd traversing a daunting, central staircase as the female protagonist topples downwards into the picture plane. The sharp pleats of her stylized skirt fan outwards, recalling the teeth of a sawtooth blade and conveying a sense of implicit violence as she is accidentally exposed.

In Weaver’s paintings, on view at James Cohan’s Tribeca location, surfaces are built up in numerous layers of matte oil paint. Line is used to confer mass onto form, toward a feeling she terms the “heaviness of things.” Otherwise-flat geometries are given depth through the use of a softened, weighted outline achieved by a technique involving repeatedly re-brushing over lines until two distinct colors form a smooth gradient. In contrast, her charcoal drawings—on view concurrently at the gallery’s Lower East Side location—are imbued with a buoyancy and lightness that belies the weight of her figures’ rounded limbs. As opposed to the defined solidity of her paintings, in Weaver’s drawings volumes are more tenuously contained by a delicate line that is alternately confident and wavering. Passages of smudged-out charcoal convey a sense of perpetual motion and reveal the process of her compositional thinking. Weaver’s drawing, which is part of her daily practice, is a study in the constant reworking of similar subjects and tableaus—pedestrians on the go, a solitary female figure contemplating her cocktail—that, while rooted in observation, represent not individualized portraiture but rather a contemporary approach to genre painting.

Grace Weaver (b. 1989, Vermont) received an MFA from Virginia Commonwealth University in 2015. Her work has been the subject of solo exhibitions in New York, NY; Burlington, VT; Berlin and Reutlingen in Germany, Glasgow, Scotland; and Chennai, India, and is featured in the collections of FRAC des Pays de la Loire, Carquefou, France; ARoS Museum, Aarhus, Denmark; and the Pizzuti Collection of the Columbus Museum of Art, Columbus, OH. In 2019, Weaver presented concurrent solo exhibitions at institutions in Germany: O.K., at Kunstpalais Erlangen and Little Sister at Oldenburger Kunstverein. The two museums have collaborated on the first monograph of the artist’s work, published by Kerber Verlag. Weaver lives and works in Brooklyn, New York.