Their reading doesn’t open up through metaphors. They aren’t ‘like’ anything; the paintings’ meaning comes from thinking about language and how it fails to express.
–Stephen Andrews in conversation with the artist. 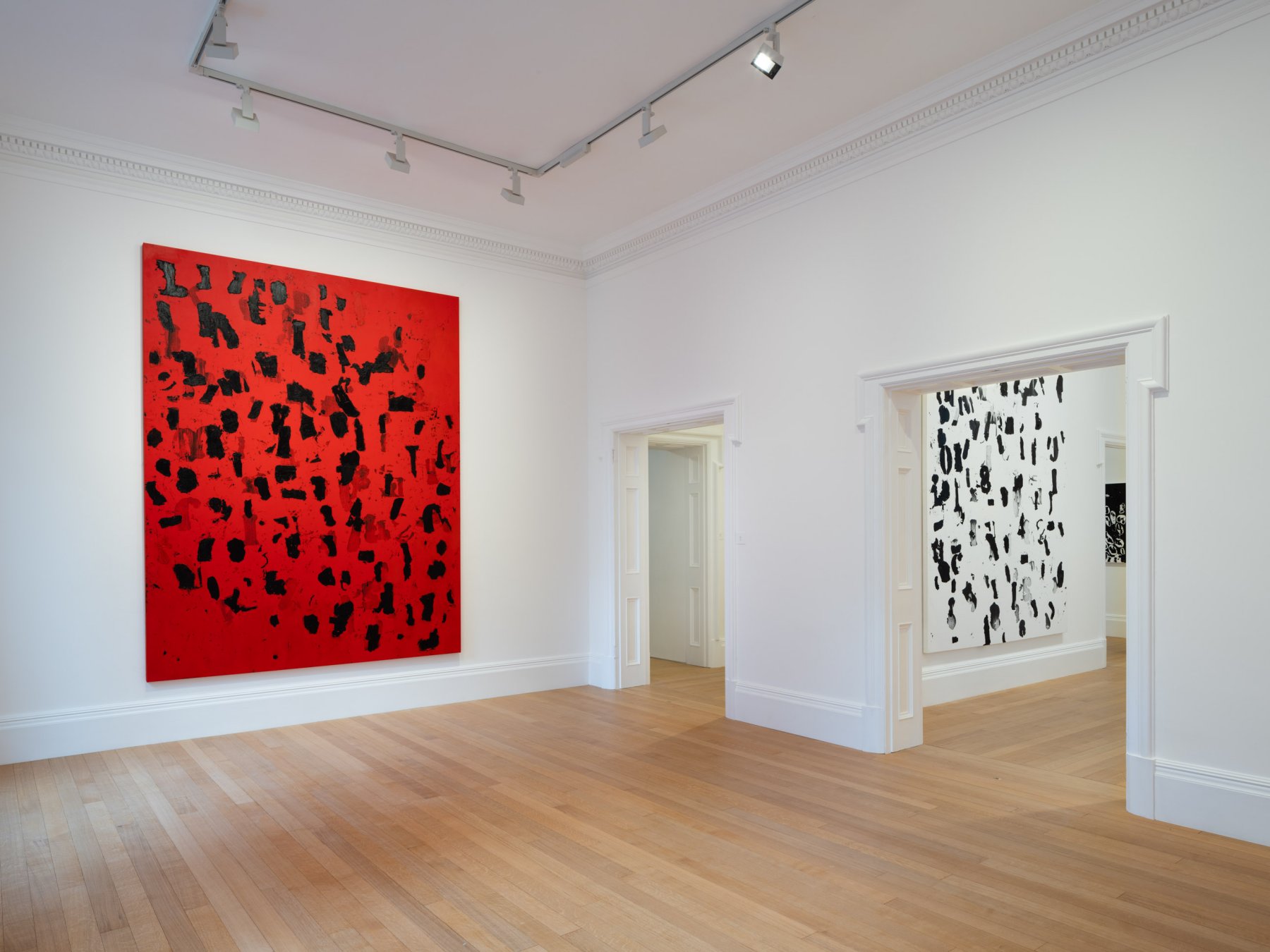 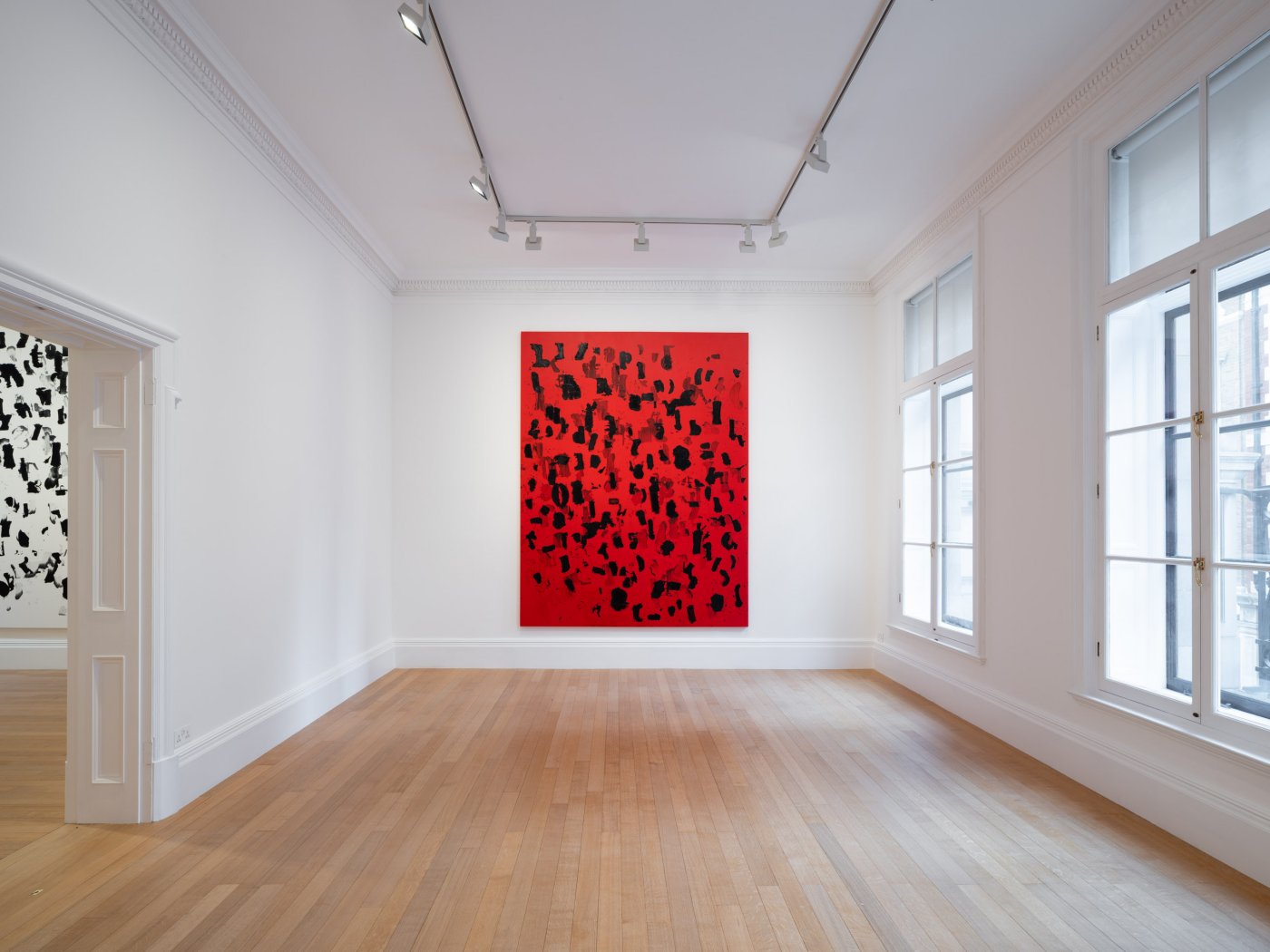 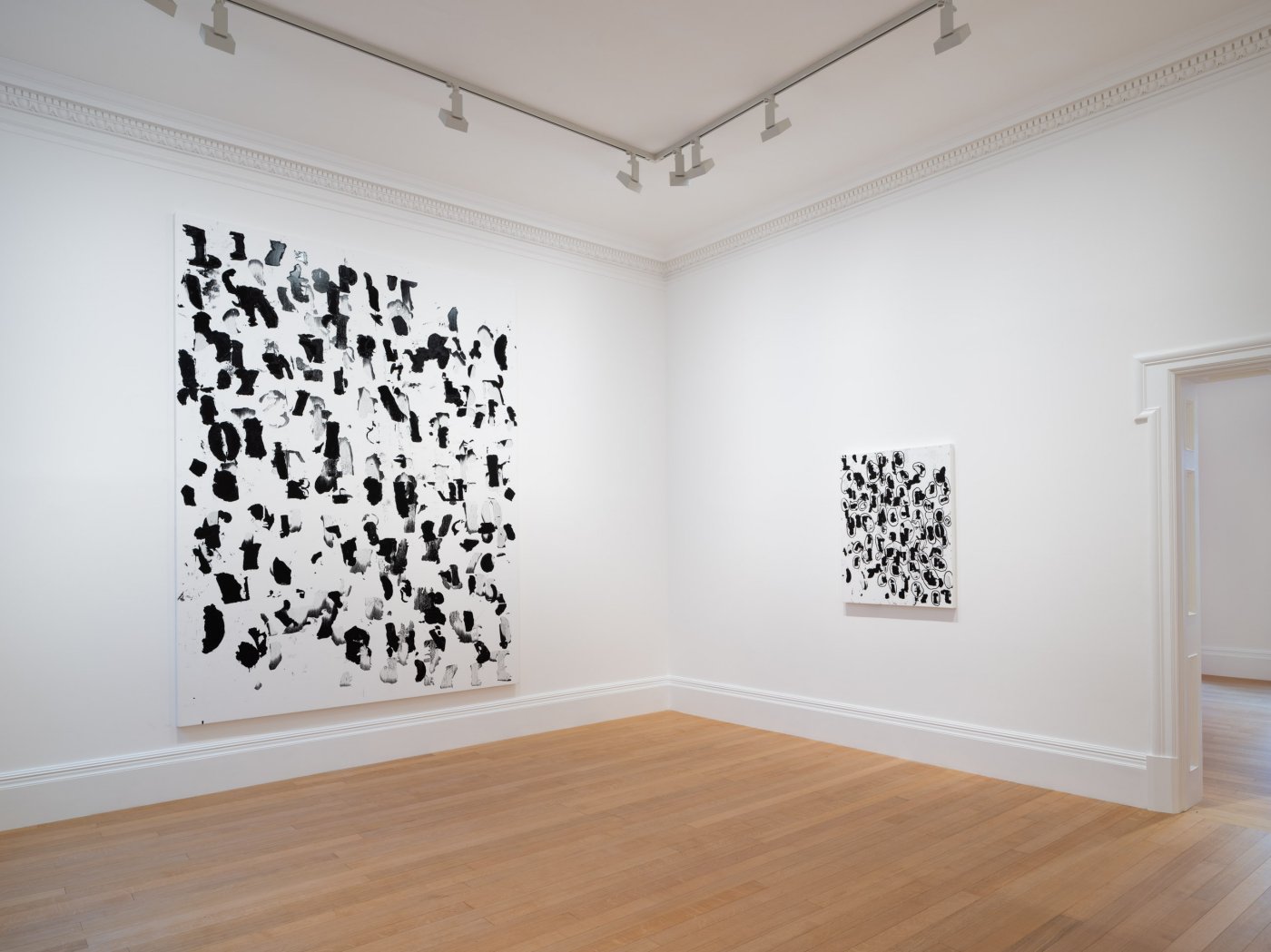 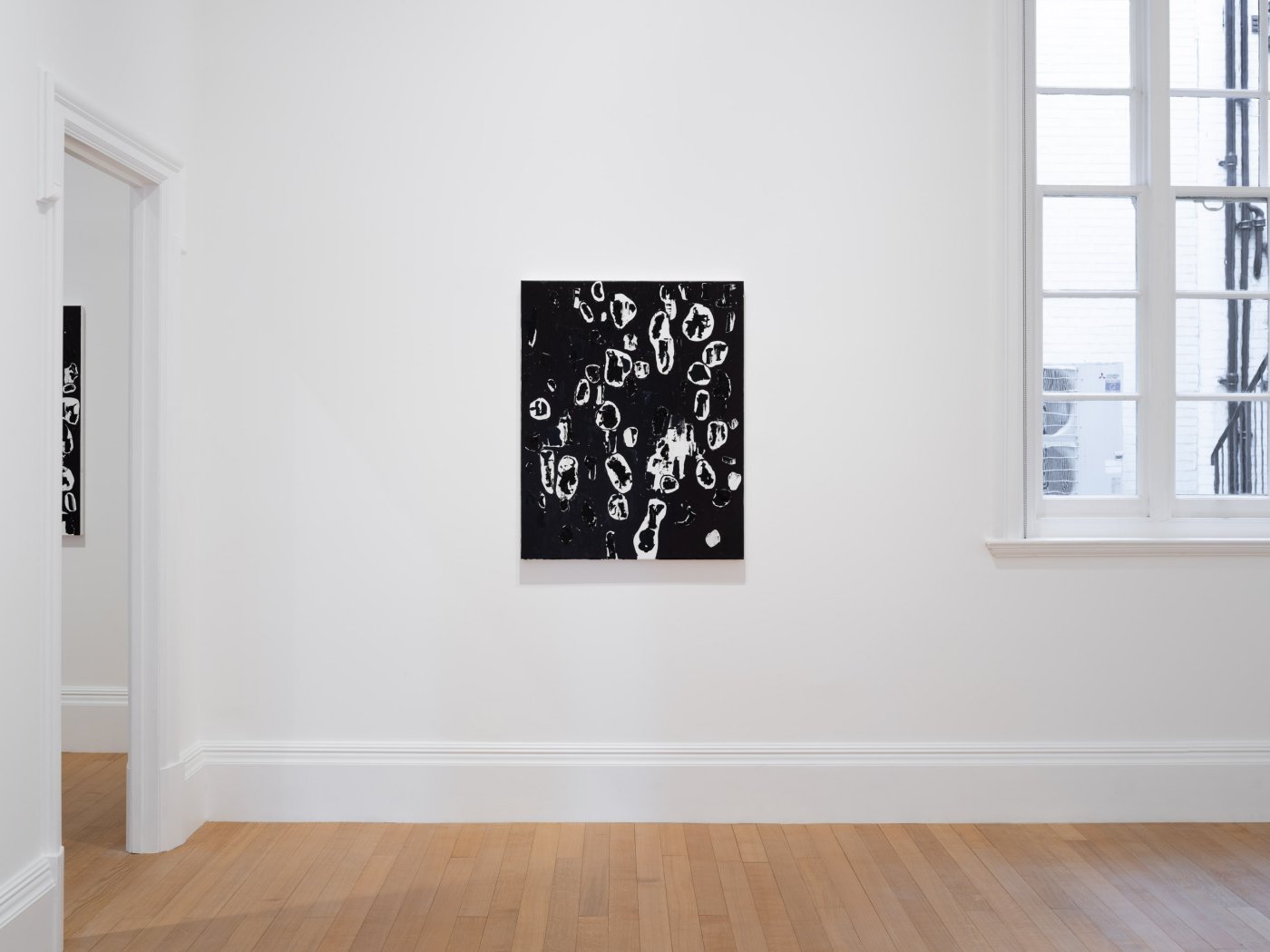 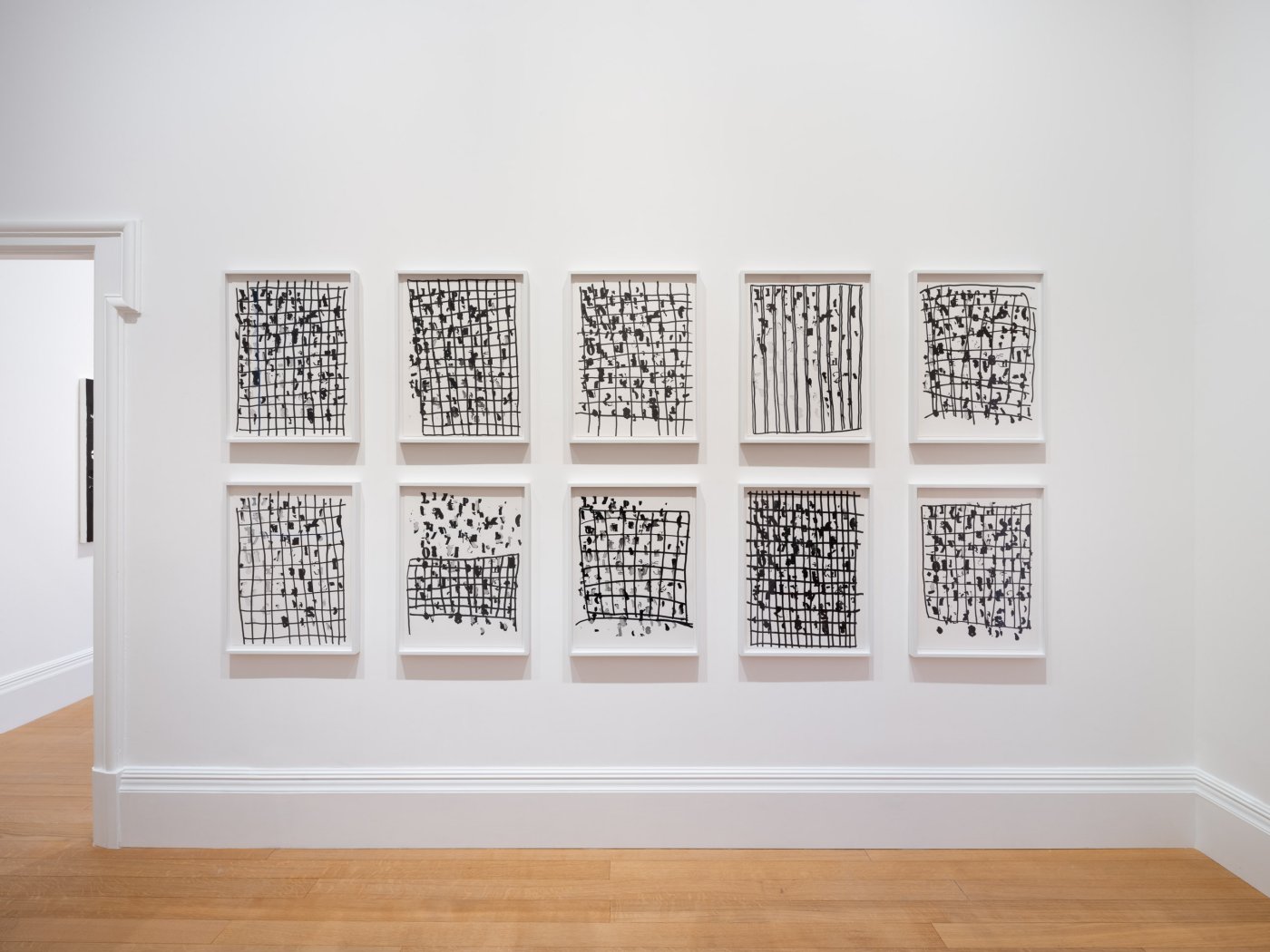 An artist versed in language and fluent in the art of quotation, Glenn Ligon’s inspiration and sources over the last three decades have ranged from high literature to stand-up comedy, from a single aphorism to an entire essay. He has abstracted the grandeur of James Baldwin’s essay Stranger in the Village in stencilled black and white paintings, rendered the words “negro sunshine” by Gertrude Stein in black-painted neon, and transcribed the off-colour routines of Richard Pryor into text paintings, highlighting the social and political value systems that give these texts meaning and how they are altered or underscored through the work.

However, the works in An Open Letter at Thomas Dane Gallery abandon any such reference and concentrate instead on the components of spoken and written language: sounds, symbols, and letterforms. For such an artist to narrow his linguistic focus to a simple field of letters is both radical and unexpected, yet natural for Ligon, who has always laboured to uncover the essence of language.

The works here continue his Debris Field series, which premiered at Thomas Dane Gallery in Naples in 2018, and were subsequently exhibited in Paris (2018), Los Angeles (2019), New York (2021), and now here in London. Ligon uses the same ground of silkscreened letters on white or dramatic red backgrounds, and alters each composition through a series of overlapping letter forms and non-linguistic mark making, ultimately creating an open-ended system which allows him to explore, in his own words, “the possibility of meaning, the elements of meaning.”

A recent iteration in the series, a group of smaller works on paper, feature imperfectly traced lines and grids around and onto the letters—Fences as the artist names them—which simultaneously highlight and draw attention to the composition while placing the works in conversation with real world border politics and the language of fences and walls that undergird it.

More than four years into his Debris Field opus, Ligon presents An Open Letter, his fourth exhibition with Thomas Dane Gallery, and the third in London.

Glenn Ligon (b. 1960) lives and works in New York. Important recent shows include Grief and Grievance: Art and Mourning in America (2021) at the New Museum, NY, where Ligon acted as a curatorial advisor; Des Parisiens Noirs at the Musée d’Orsay, Paris (2019); Blue Black (2017), an exhibition Ligon curated at the Pulitzer Arts Foundation in St. Louis, inspired by the site-specific Ellsworth Kelly wall; and Glenn Ligon: Encounters and Collisions (2015), a curatorial project organized with Nottingham Contemporary and Tate Liverpool. Ligon has also been the subject of solo museum exhibitions at the Camden Arts Centre in London, the Power Plant in Toronto, the Walker Art Center in Minneapolis, and the Studio Museum in Harlem, among others, and in 2011, the Whitney Museum of American Art held a mid- career retrospective of Ligon’s work, Glenn Ligon: America, organized by Scott Rothkopf, which traveled nationally. His work has been included in major international exhibitions, including the Venice Biennale (2015 and 1997), Berlin Biennial (2014), Istanbul Biennial (2011), Documenta XI (2002), and Gwangju Biennale (2000).