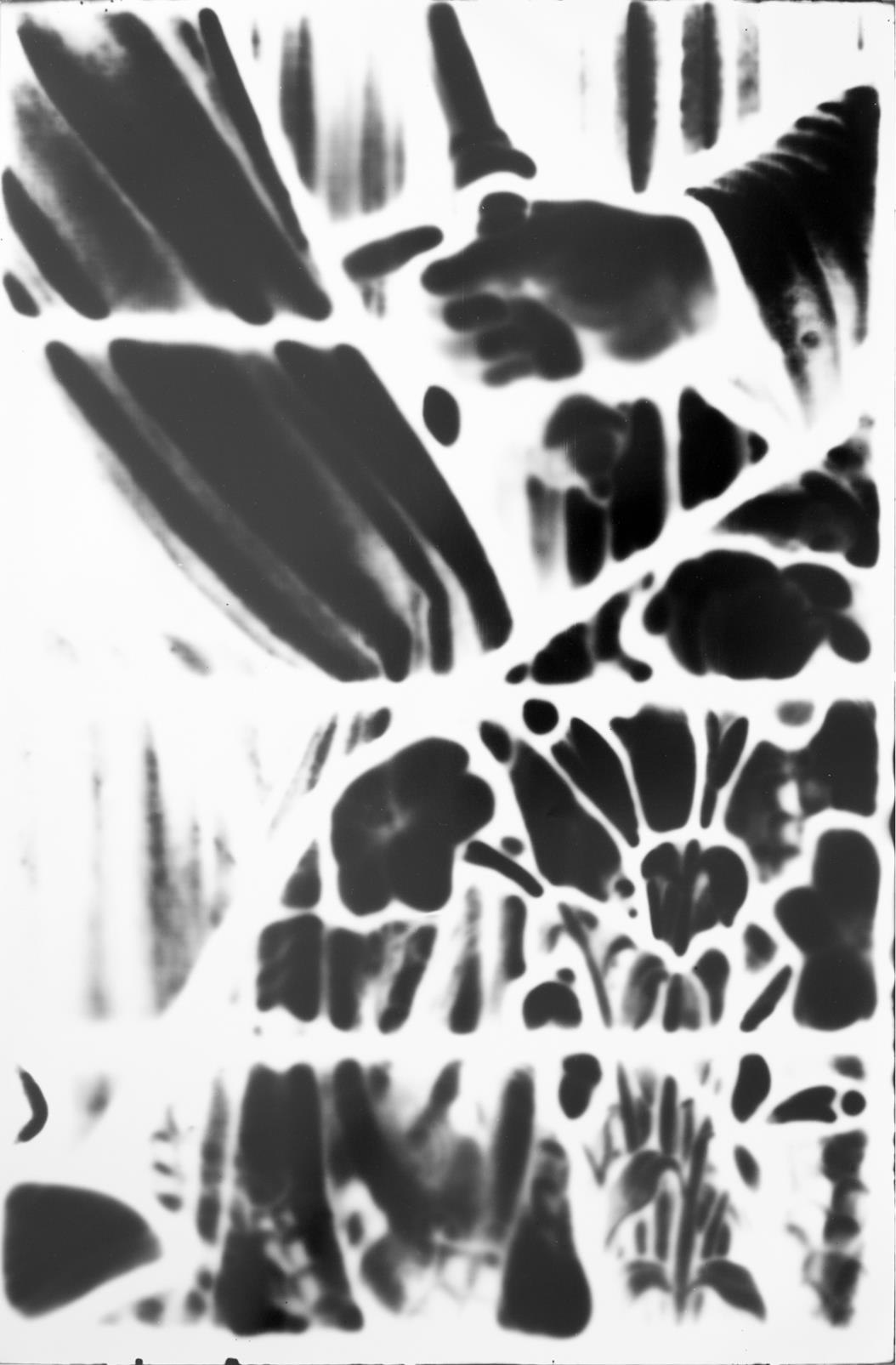 Giorgio Andreotta Calò often operates within the liminal space in which natural and anthropic forces interact. Photography, etymologically the union of the terms drawing and light, is understood as the interaction between man and his luminous surroundings, a mechanism of vision. This becomes a raw material, an element that is intercepted and manipulated in order to reconfigure a space and to reinterpret a cultural constellation.
From 21st June, the summer solstice and the opening of the show, to 23rd September, the closing day of the exhibition and the autumnal equinox, the exhibitive space of the gallery will be totally immersed in a red, dense, saturated atmosphere. The application of red filter film on the windows modifies the natural light coming in, the sole source of lighting for the entire duration of the exhibition. A luminous transfiguration that is repeated each day, between dawn and dusk, placing the space within a cyclic temporality and a symbolic dimension. The red atmosphere, flattening tones and blurring details, sets the spectator within a veiled space, generating an alienating perception. Light, thus transfigured, takes shape in its materiality and is examined in its variations and from its diverse viewpoints, exalting the perception of the atmospheric exterior inside the gallery.

Calò’s is above all a conceptual red, tied to his use of photography, to its inactinic properties. In the traditional process of development, inactinic light protects the photosensitive material and prevents impression: the red absorbs those frequencies of the light spectrum that produce the oxidisation of silver salts. The perceptive experience is above all photographic experience: the exhibitive space, converted into a darkroom, is symbolically reconfigured into the place of the physical/chemical conception of the image.
Within this symbolic frame, on the wall opposite the six large red windows the piece “Annunciazione “ (Annunciation) is placed, the representation of a parallel conception, that of Christ, announced to the Virgin Mary. The piece consists of 14 photographic prints in natural light, generated by the impact of the silver salts with the light of the sun. The prints were made over the previous summer by placing photosensitive paper in contact with a historic stained glass window in the monumental Oude Kerk church in Amsterdam.

Commonly, in analogical development of photography inside a darkroom, photographic contact is made by regulating light via an enlarger. A length of exposure is then defined that allows a positive to be obtained from a correct reading of the shot. In Annunciazione the same procedure is put into action using the light that is naturally filtered through the window. The regulation becomes natural: it is achieved by intercepting the atmospheric and solar variations over the course of the day and throughout the summer season. The light, passing through the window and being charged with the image represented, generates a reflected copy of the scene of the Annunciation.

In the resulting representation, an iconic image of the Angel looms before the Virgin Mary, announcing the immaculate conception. The ‘illustrated’ narrative harks back to an age of widespread illiteracy and attributes great importance to gesturality and to its symbolism. The right hand of the angel is held aloft, towards the divine, the left hand pointing towards Mary’s womb and at the same time a lily, a symbol of purity. But the lily is also a symbol of death and the scene already anticipates the death of Christ – the first narrative nucleus contains within it both the beginning and the end of the evangelical story.

By presenting the negative of the image, the photographic piece inverts the historical time of the event. The linear course, from life to anticipated death, is reversed and repositioned within a cyclic temporality, as evoked by the red light, by its acting within the confines of dawn and dusk, summer solstice and autumnal equinox.

In the current exhibition the 12 prints representing the central part of the scene are placed beneath skylights, lit from above, the divine light of the annunciation coinciding symbolically with the natural light that has oxidised the silver salts of the images and with that which, filtered through red, emerges within a protected space, photographically immaculate.

A contamination that loses its religious and sacred character, instead becoming chemical/physical – the preservation of the silver salts from oxidisation of a latent image within an inactinic atmosphere. A biblical religious narrative is reread through the light of the technical photographic process, brought back to a universal dimension. The sacred mystery of the immaculate conception becomes the secular mystery of the physical/chemical generation of the image, of the creation of imagination.

Upon a second wall hang the two remaining photographic prints, taken from a peripheral part of the scene. A dog, the symbol of fidelity, accompanies a human figure, traditionally identified as the mayor of Amsterdam, a representation of the contingent kneeling before the divine miracle. At the centre of the space there are five fresh lilies, of the lilium candidum species. Laid in a transparent vase, the flowers are placed between the large red windows and the photographs. It is the same lily of the annunciation, the symbol of death and of purity – candidum indeed, like the blank photographic sheet, protected and preserved from the inactinic red. But the lily, before being a symbolic representation, is a vegetal element, a living witness. It normally blooms in summer, nourished by a solar light that on this occasion is paradoxically transfigured into red. Immersion in red, photographic work and lily constitute three acts of an organically conceived spatial and symbolic dialogue, set in a sole installation. Their interaction reproposes and reinterprets the photographic experience and the mythical/religious narrative generating an unprecedented vision, the result of continuous manipulation of luminous matter by the artist.

On the occasion of the opening of the exhibition, the first two volumes of the publication that document the installation project Anastasis, the original piece preceding Annunciazione, will be available to view at the gallery. Anastasis was created in 2018 at the Oude Kerk in Amsterdam, at the invitation of the non-profit institution Oude Kerk and with the contribution of Italian Council and Mondriaan Fund, in collaboration with Rijksakademie van Beeldende Kunsten and the Triennale di Milano. The books are published by Oude Kerk and Roma publication. The film, documenting the installation process, will also be available to view for the entire duration of the exhibition on the artist’s Vimeo channel. The third volume will be presented on the occasion of the closing of the exhibition. In a similar way to this exhibition, Anastasis saw the screening of the entire stained-glass surface of the Oude Kerk church, invaded by a red saturated light. The processual installation of filters began with an original fragment of the nativity located in the north transept. The work continued clockwise, following the movement of the sun, in parallel along the upper and lower order of windows over an entire month. The film Anastasis covers this processual intensification of the red light day by day until the creation of a new totally immersive environment. The choice of media is due the peculiar capacity of analogical formats for picking up with fidelity the tonality of the red visible in the church. Moreover, celluloid is a reference to the filter film applied to the windows, its physical/ chemical impression is analogous to that of direct light photographic prints.

The same immersion of the church into an inactinic red atmosphere is at the centre of the first volume of the publication, Anastasis (ἀνάστασις). Leafing through the pages it is possible to view the space of the church in circular fashion, following the movement of the sun and its varying luminous intensity from dawn to dusk, the same movement that characterises the processual installation of the filters. A series of critical contributions, of theological and artistic nature, enrich the iconographic apparatus. A second book, Anastasis (annunciazione), specifically dedicated to the photographic piece Annunciazione, covers the work in images. A critical essay analyses it in technical/photographic terms, relating it to other works by the artist and to the history of the media itself, to its constitutive foundations.

About the Artist:
Born in Venice in 1979. He lives and works between Italy and the Netherlands. He studied sculpture at the Academy of Fine Arts in Venice and at the Kunsthochschule Berlin, graduating in 2005 with a thesis about Gordon Matta-Clark. Between 2001 and 2007 he was assistant to Ilya and Emilia Kabakov. In 2008 he moved to the Netherlands where he was artist in residence at the Rijksakademie van Beeldende Kunsten in Amsterdam (2009-2011).

His work has been presented in 2011 at the 54th International Art Exhibition of the Venice Biennale directed by Bice Curiger. In 2012 he won the Premio Italia for contemporary art promoted by MAXXI Museum in Rome with the work ‘Prima che sia notte’ (Before night falls).

Between 2012 and 2013 he has been artist in residence at the Centre National d’Art Contemporain in Villa Arson, Nice, France. In 2014 he won the Premio New York, sponsored by the Italian Ministry of Foreign Affairs.

In 2017 he is one of the three artists invited to represent Italy in the pavilion curated by Cecilia Alemani under the 57th International Art Exhibition, the Venice Biennale. With the project Anastasis, in 2017 he won the second edition of the Italian Council grant awarded by the MiBACT (Italian Ministry of Culture), which supported the monumental installation realised in 2018 at the Oude Kerk in Amsterdam. Currently on display at Pirelli HangarBicocca with CITTÀDIMILANO.