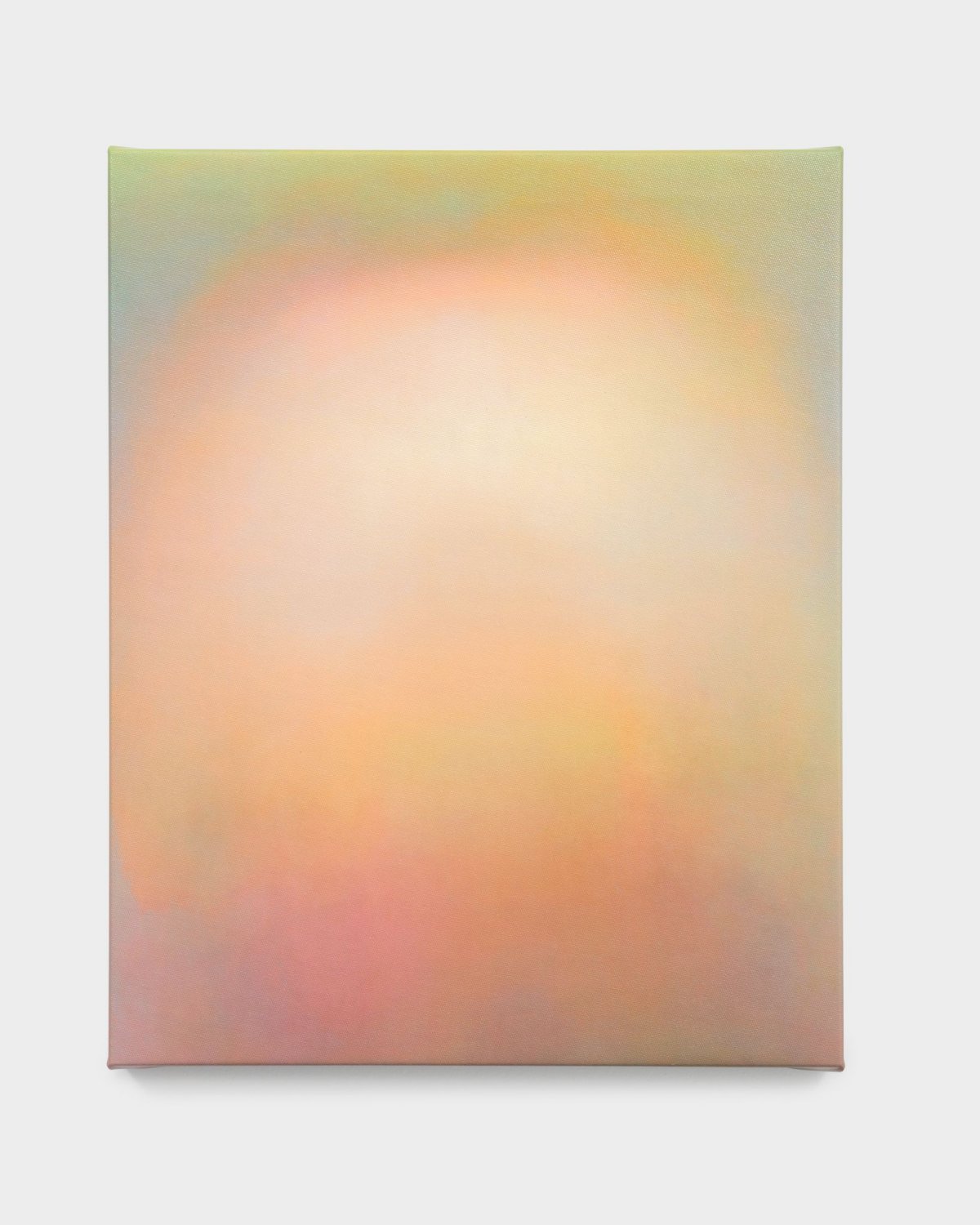 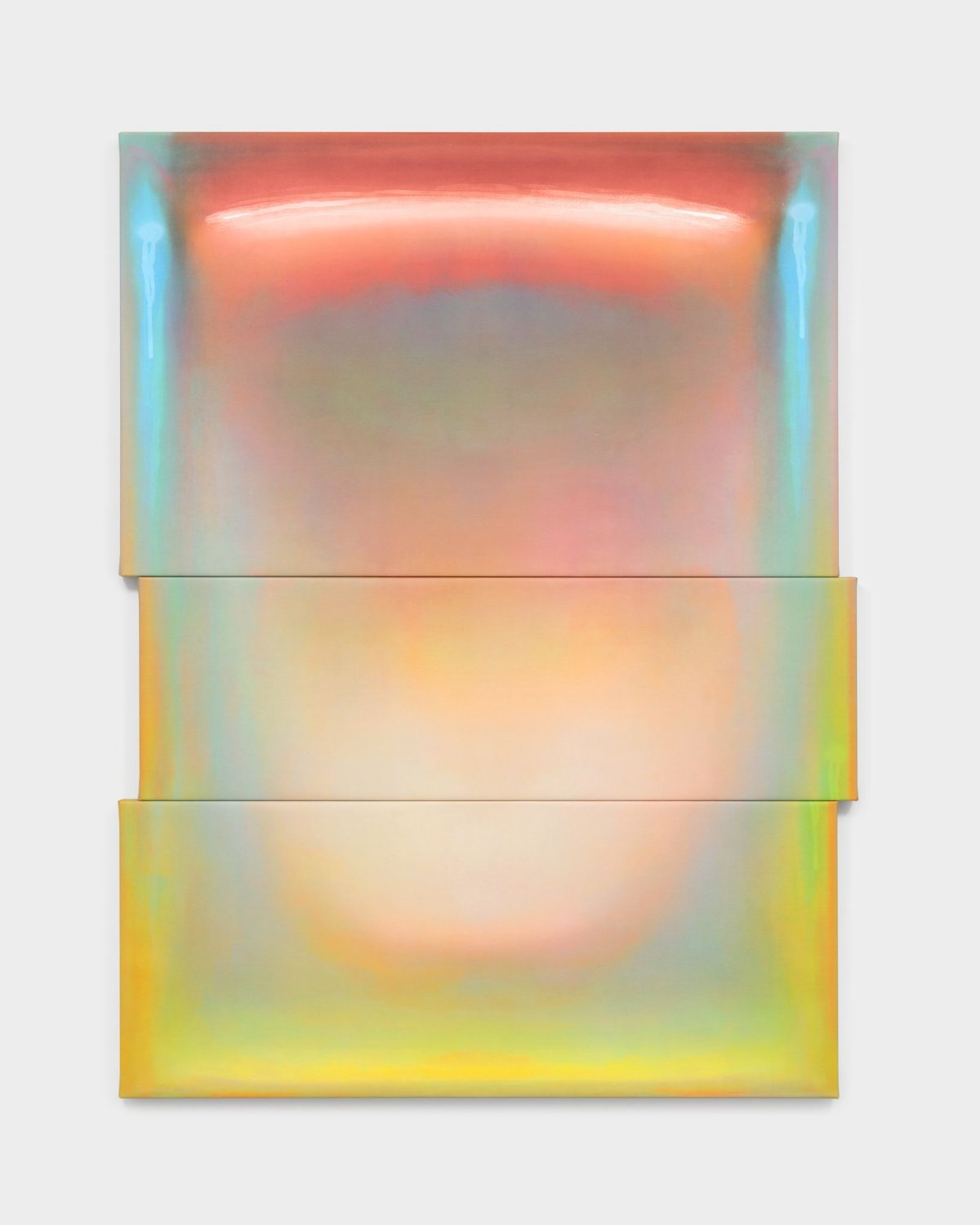 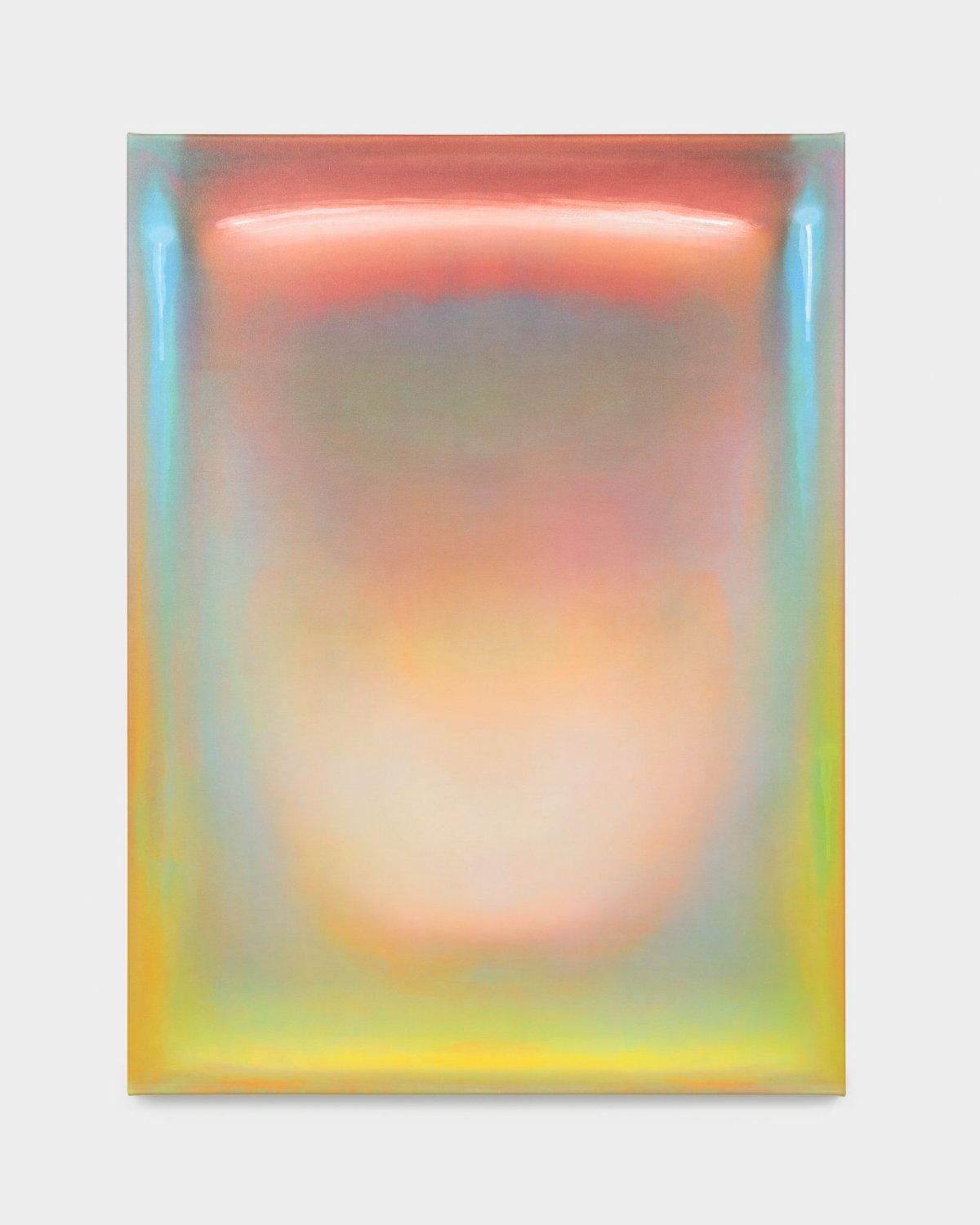 Ink and varnish on canvas
130 x 97 cm 51 x 38 in
Courtesy of the Artist and Almine Rech. Photo: Nicolas Brasseur 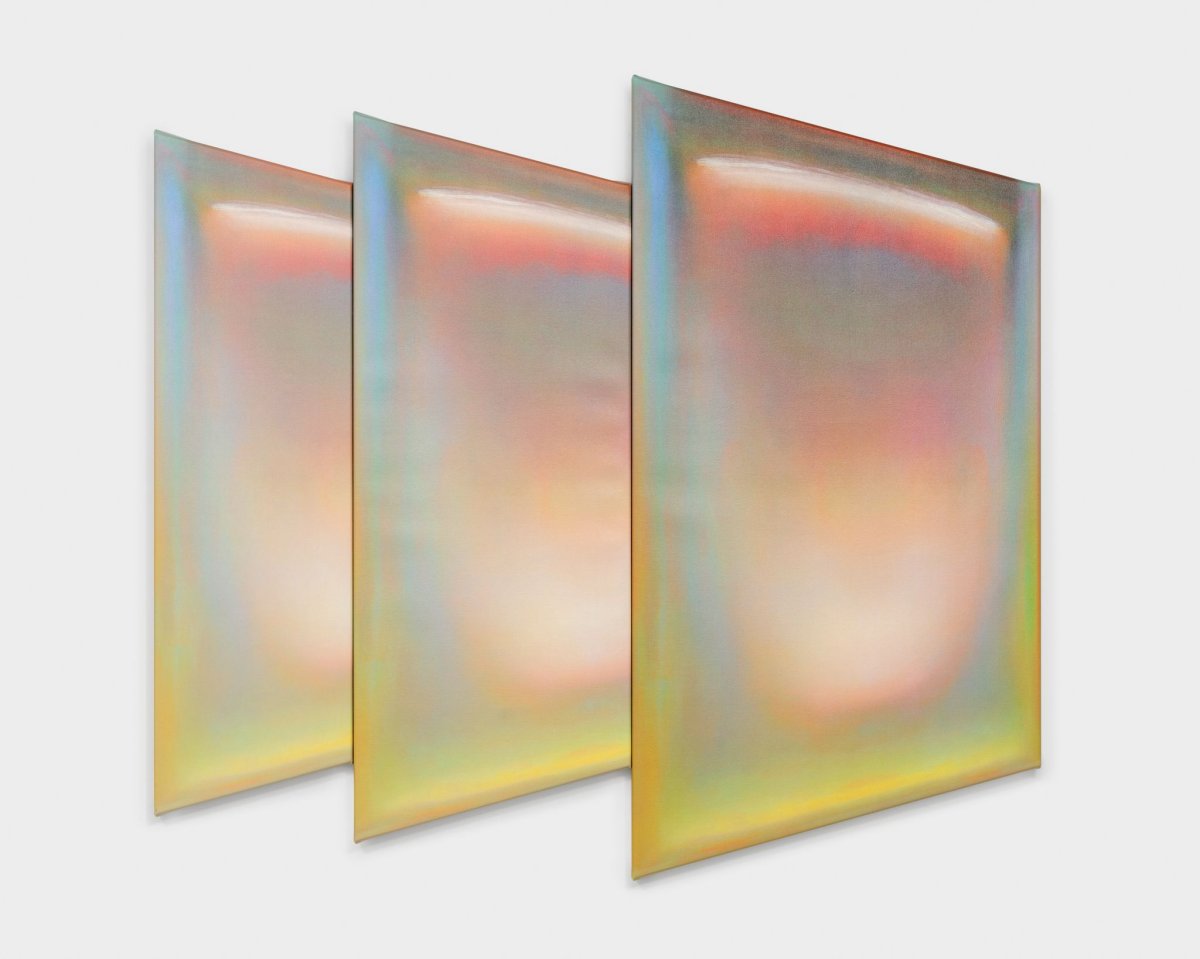 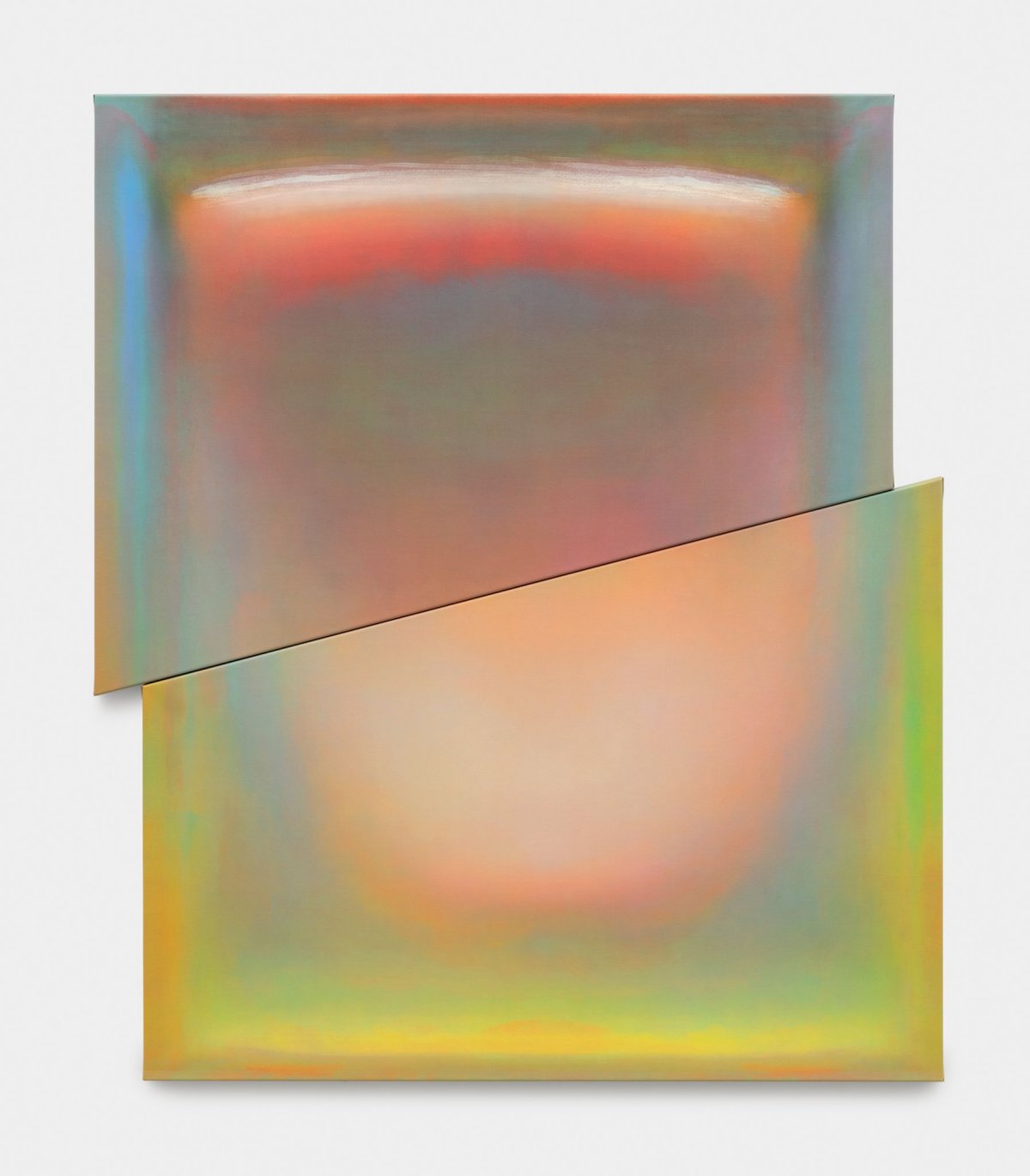 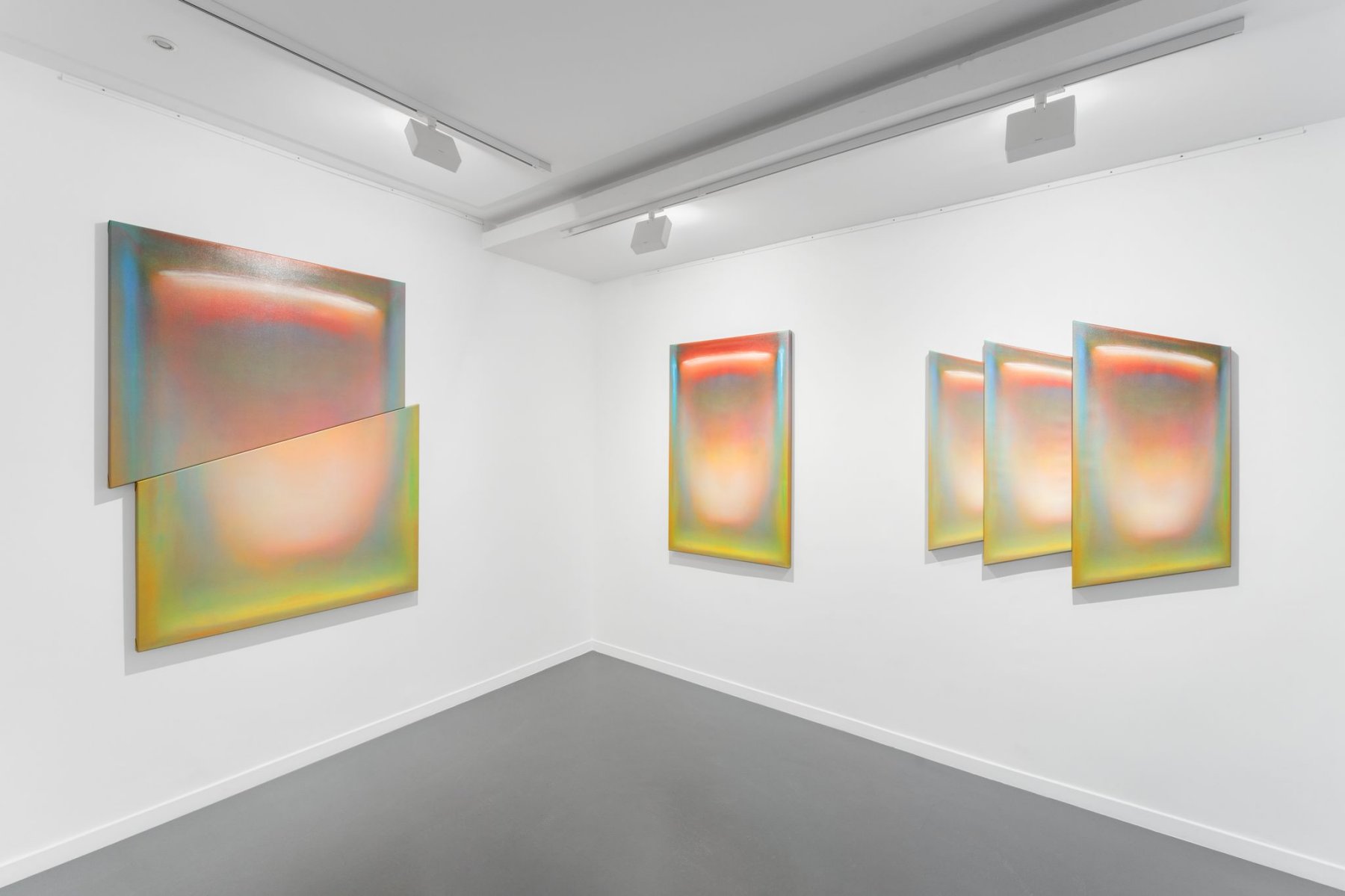 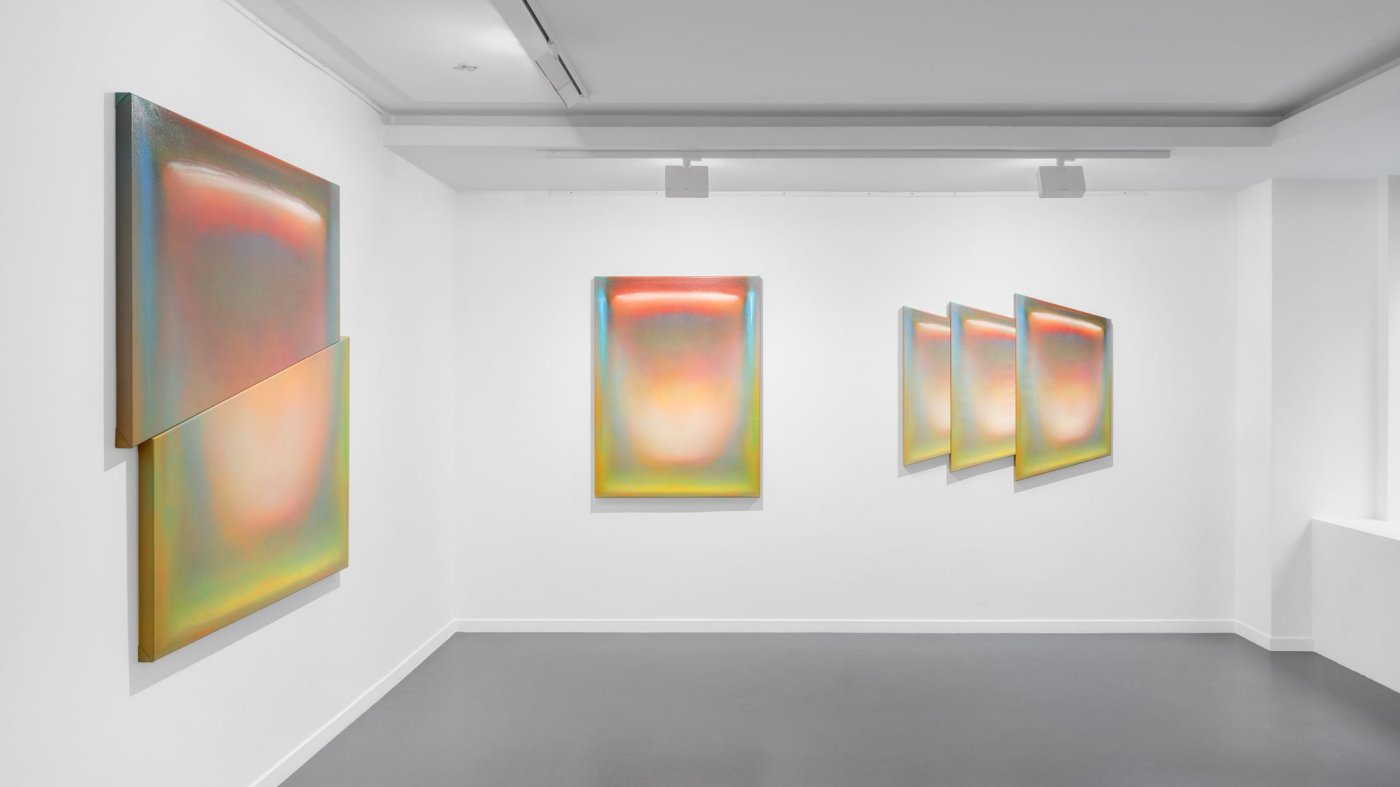 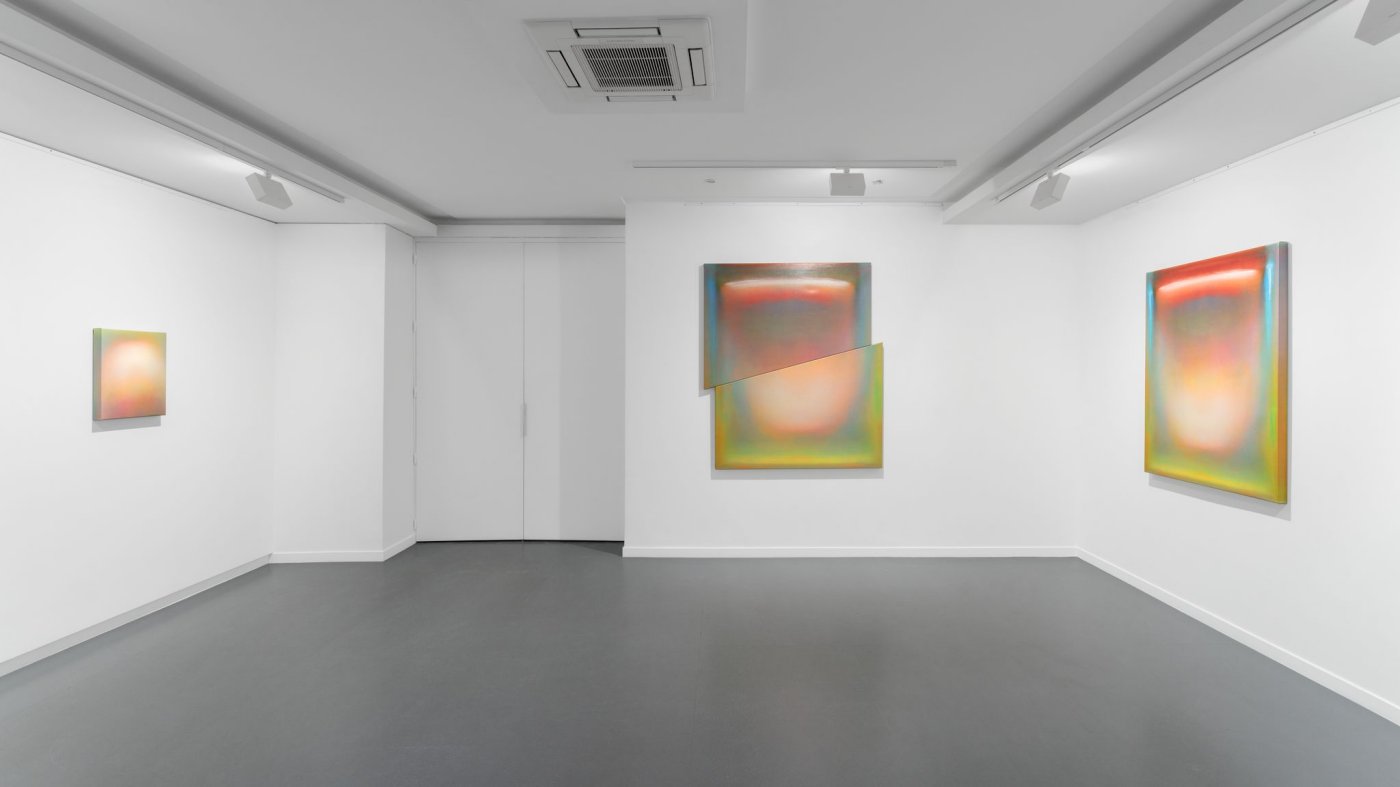 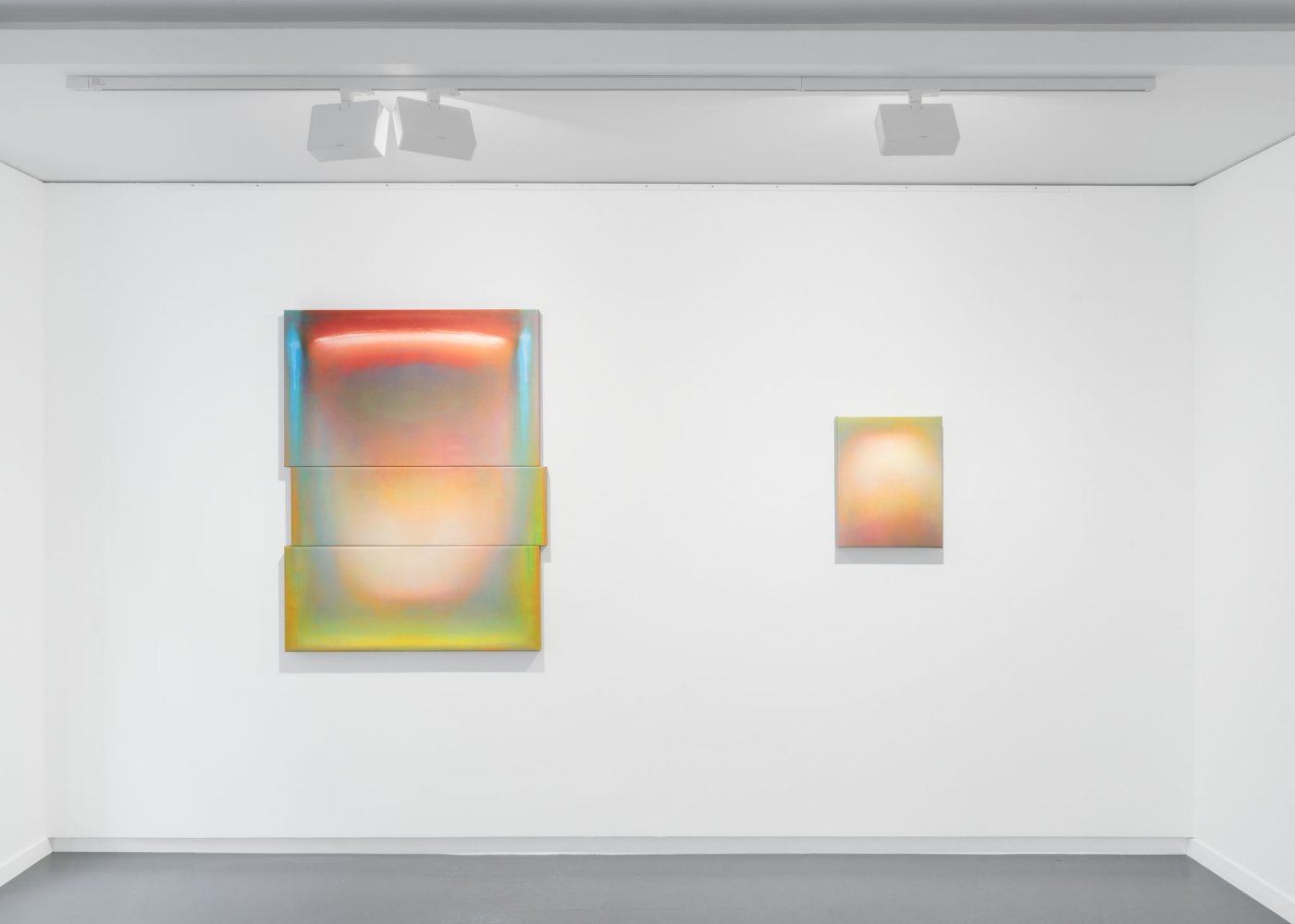 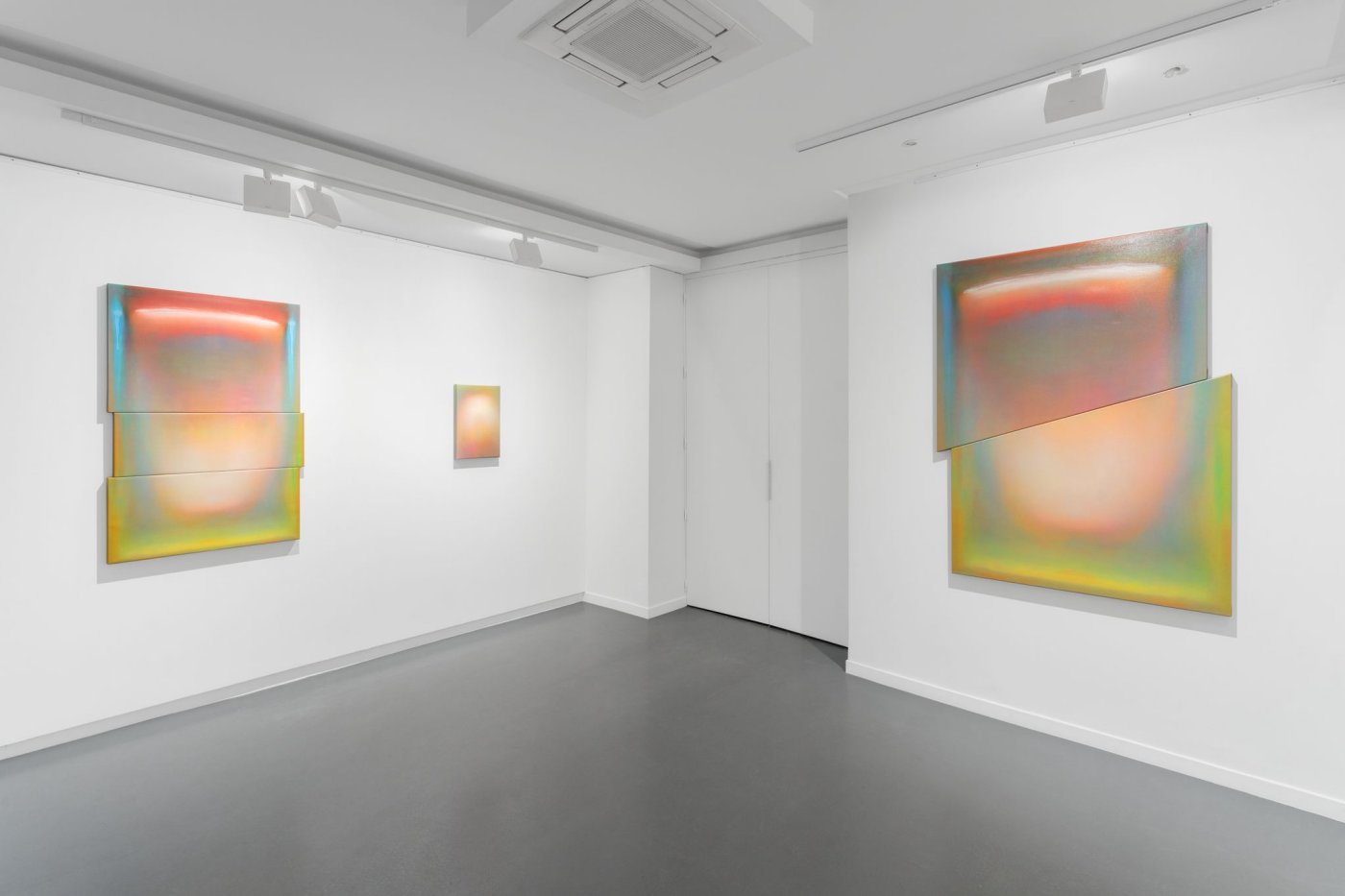 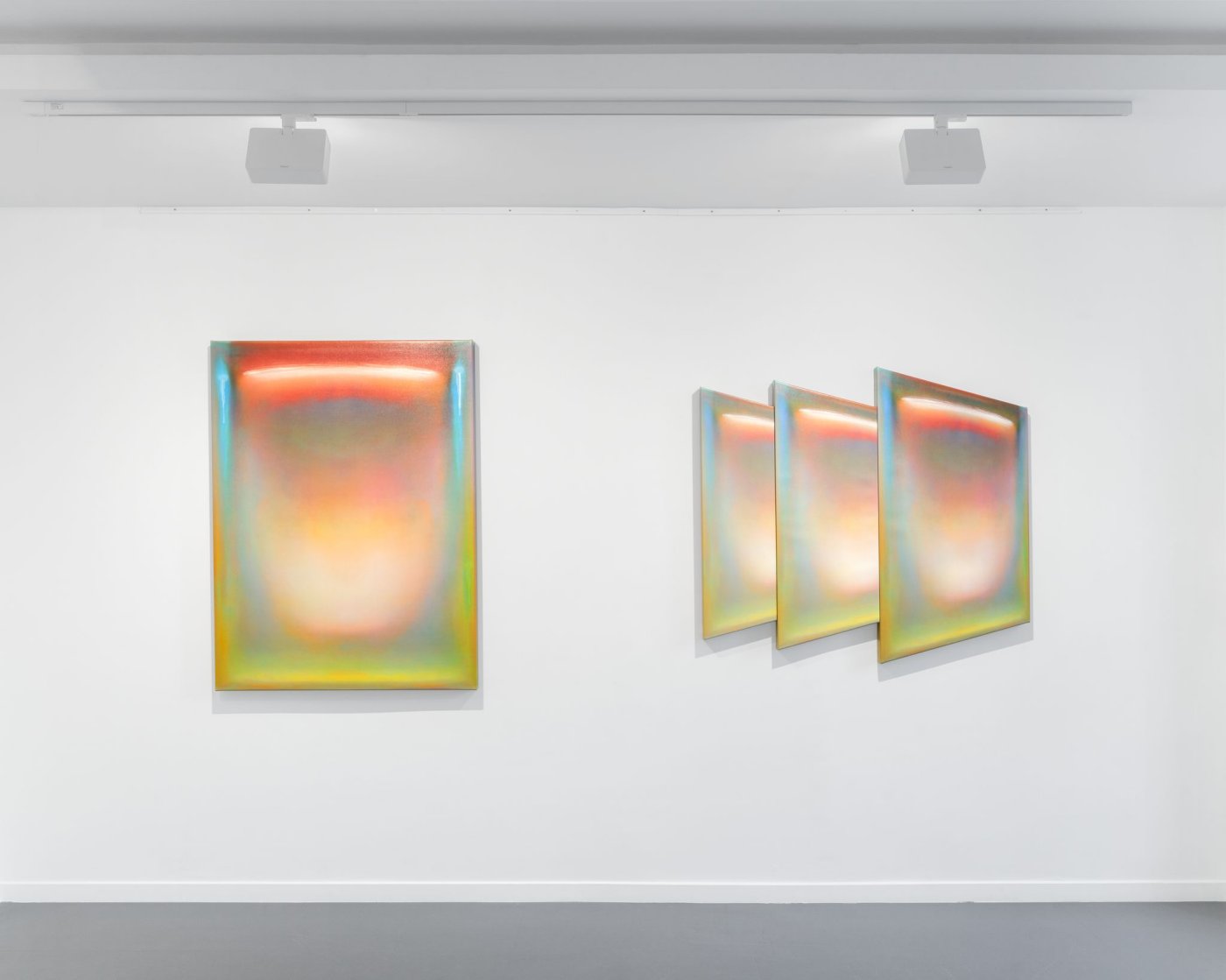 Gioele Amaro usually defines himself as a digital painter, and he handles pixels with a painter’s skill, although he does not actually paint. His digital artworks are intended to leave the virtual realm and become physical objects — paintings. This movement from a transcendent form with fluid properties to an immanent form is at the heart of the artist’s approach. Printed on canvas and varnished, his artworks question the history of painting, foregrounding a new history, that of a reproducible digital image. In this uninhibited back-and-forth between the real and the virtual, the artist steps into a meta-world where time and space are elements of a world in continuous construction. These blurred images, which can be dismantled and put back together again, are symptomatic of the contemporary world.

Gioele Amaro’s practice culminates in an essential question: are these still paintings? Leaving aside a material or elementary definition (a pigment and a binding agent on a surface), the artist addresses a series of key issues for contemporary art that were originally raised by Conceptualism and Minimalism: can machines, computers, and artificial intelligence be creative? And, conversely, isn’t the artist who uses these tools still an artist, in this case, a painter?

Abstract or figurative, real or virtual — this is no longer the question, or it no longer needs to be. However, an artist seems always to summon a history of forms and references. However contemporary this new painting may be, it has nevertheless inherited myths from what came before. A major myth present here is imitation or mimesis, the practice condemned by Plato of representing reality in order to deceive and entice. From the architecture of Villa Barbaro painted by Paolo Veronese to the spiritual surfaces of Mark Rothko, we can glimpse certain sources of this hybrid practice: one extends the world, and the other rejects it.

Deceit resides precisely in the in-between. Truth only exists in categories that allow it to be perceived. Too intentional to be minimalist abstractions, too precise to be paintings in the traditional sense, these artworks are the very object of the simulacrum. Amaro goes beyond trickery to grapple with the very principle of reality: the concept of the object of representation, the canvas, and even painting itself, thrusting this notion developed by Baudrillard into the digital era. In Simulacra and Simulation (1981), Baudrillard stated:
“The simulacrum is never that which conceals the truth — it is the truth that conceals that there is none. The simulacrum is true.” Neither reflections nor rejections of reality, the artist’s paintings are not windows or mirrors, but screens designing a new reality, which is both connected to real life and autonomous. They are paintings, but not only paintings. They embody the third nascent identity of a binary artistic history.

From anamorphosis to abstraction, Gioele Amaro recalls art history writ large and its treatment of the effects of diffraction or distortion of natural or artificial light: the bulbous, translucent screen of an old computer; an airplane window; or the reflection of a neon light on a metallic surface. These attempts to attach abstraction to reality are sometimes playfully referenced in titles such as DownDown (2021) or Moonset (2021). The aesthetic of distortion that the artist develops places perception at the heart of his approach. In every artwork, the viewer may see through or bump up against the canvas, making the act of viewing central. Gioele Amaro’s art has always been related to temporal and perceptive traps, from a previous series of humorous canvases in which the archetype of the tourist straight out of a comic book gets lost, literally, in abstraction (The Copyist, 2017) to surfaces in which human shapes with colorful clothing seem to be reflected (Selfie, 2022). Shifts, overlays, and copies are all signs of a chronic distortion of contemporary information. Displaying this commanding relativism of representation, Jean-Luc Godard said: “There is no true image. Truly, there are only images.”

By exploring holography, a process of recording the phase and amplitude of the wave diffracted by an object, the artist already began exploring the question of a third dimension on the flat surface of his canvases without bringing effects of perspective into play. Here, Amaro expresses a way of thinking about the limits of painting, with the two-dimensionality of his art receding as he emphasizes the sculptural properties of the canvas. With this new series, Gioele Amaro subverts the primacy of the image through that of the object, breaking with the history of painting on a rectangular frame and preferring the ambiguity of paintings that have become wall sculptures. Damaged, fractured, or cut into pieces and reassembled like the shaped canvases of Frank Stella or Charles Hinman, the works of Gioele Amaro shatter the notion of a homogeneous world with fixed meaning. Starting with a single source of deconstructed visual information, the artist establishes the framework of the uniqueness of the artwork in the digital era. Distorted, these images draw attention to their disruptive environment, which is that of our society.

The obvious, self-referential, and poetic title of this exhibition, Just a Painting, is both a question and a statement. Obliterating the production of a long tradition of aesthetic classifications, this series of paintings does not address the previously determining categories of abstraction or figuration, of technique or reference, of rejection or imitation of the world. Instead it is about absorbing the world, about the world’s ability to approach this increasingly porous boundary in which simulation is confused with reality. In the eyes of the contemporary world, it is not true painting (art history has shown us that this debate, while not completely vain, will never end) but it is truly only a painting — a dense, opaque fragment of this history and its future evolutions.

Courtesy of the Artist and Almine Rech. Photos: Nicolas Brasseur