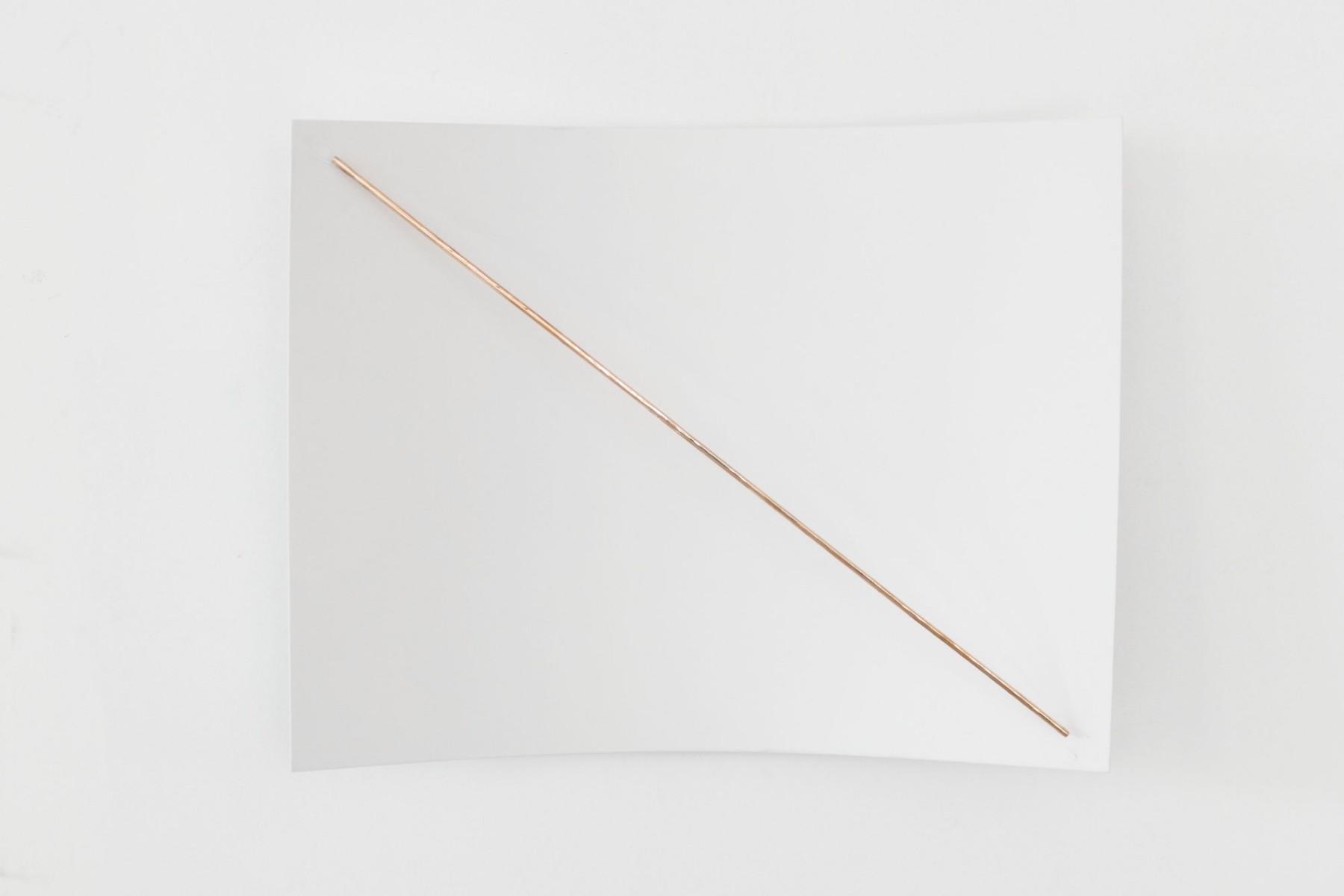 Kruip presents an immersive dialogue between light and sound, stemming from her years-long study of formal abstraction and the passage of time and pursuing her production of sculptural and immaterial pieces at the intersection of music, theatre, and visual arts.

Using traditional theatre lighting techniques and sculptural percussion instruments, constantly echoing with each other, Kruip creates a contemplative and sensorial choreography inviting the visitors to activate the works themselves while urging them to become fully aware of the spaces they occupy, and the time dedicated within them.

A duo of monumental rhombuses—one in brass and another in silver and nickel—float in the gallery’s first room, facing the mountain framed by the 21st-floor windows. Both pieces were manufactured according to the golden ratio (1.618) in collaboration with renowned German instrument-maker Thein Brass, with whom Kruip has been working for years. The pieces are made from a unique metal alloy and fully exist as sculptures and may also be played as professional instruments. When activated with their corresponding beaters, the rhombuses produce deep overtones and generate new fields of resonance that travel throughout the gallery. The instruments set off an intimate, physical experience, leaving each visitor to choose in which ways the sculptures and space reverberate.

On the wall leading to the adjacent room, a clock counts down the minutes from 7 minutes and 30 seconds to zero, emulating the digital clocks used in cinemas to display the time remaining before a film starts. The clock discreetly draws the viewers’ attention to the time they spend in the first room and will dedicate in the second.

Triggered by Kruip’s interest in monochrome painting and slow cinema, the light piece occupying the gallery’s second room, “Cinemascope”, proposes a representation through the absence of representation: visitors are invited to sit on a bench in the darkened space to experience monochrome landscapes, created not digitally by a projector but analogically using ten theatre spotlights. Left to their own devices, the viewers are given time to move their gaze along the shifting immaterial landscape. Furthermore, in the absence of a visible narration, visitors are invited to access a spiritual type of engagement with the artwork.

With a seven and a half-minute duration, the light composition emulates some of the most iconic screen ratios used in the history of cinema. The work’s formal simplicity and slowness pave the way for the spectator’s emancipation: handing over the power to the viewer has been a recurring wish within Kruip’s work, as it particularly resonates with her theatre light trilogy that began with “A Possibility of an Abstraction” in 2014. Facing the screen, one projects into it and creates their personal narration and image. A work such as “Cinemascope” resonates deeply with the contemporary moment, specifically in how we realise that our perspectives and ideas about reality seek to shape how we live or react to that reality.

The gallery’s third room represents the encounter of the artistic gestures of the two first rooms, in which Kruip couples the shapes of the cinema screens and their inherent contemplative attributes to the instruments’ resonance. Kruip makes the screen physical and bends its shape in such a way that it becomes an acoustic shield for smaller brass percussion lines. The sizes of the sculptural pieces are directly adapted from the light piece’s ratios in the adjacent room.

The exhibition is a continuation and further development from Germaine Kruip’s practice that merges time, space and perception over the span of two decades. In between the visual arts, the stage, and architecture, she investigates and presents her observations through architectural, sculptural and performative interventions. Kruip studies the scenography of ungraspable phenomena, such as the ever-changing daylight and the passage of time; the relationship between art and ritual in repetitive gestures, aiming to subtly alter perception; historical attempts to create abstraction by means of geometry – and finally the desires, theories and ideologies underlying these attempts. Kruip lives and works between Brussels and Amsterdam.