In celebration of the 100th birthday of Georges Mathieu (1921-2012), Perrotin and Nahmad Contemporary, in collaboration with the artist’s estate, are pleased to mount the first extensive survey of Georges Mathieu’s practice in the United States. 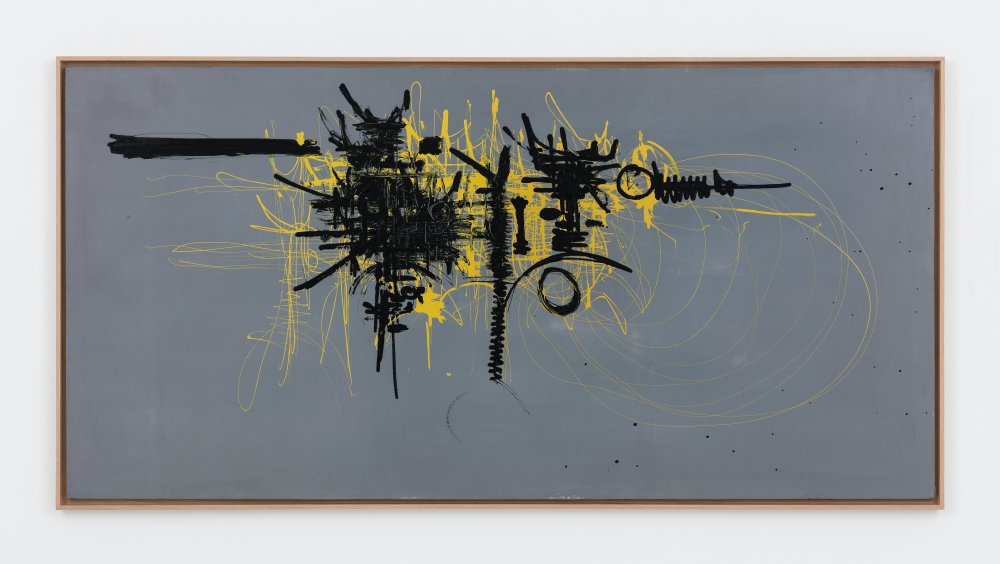 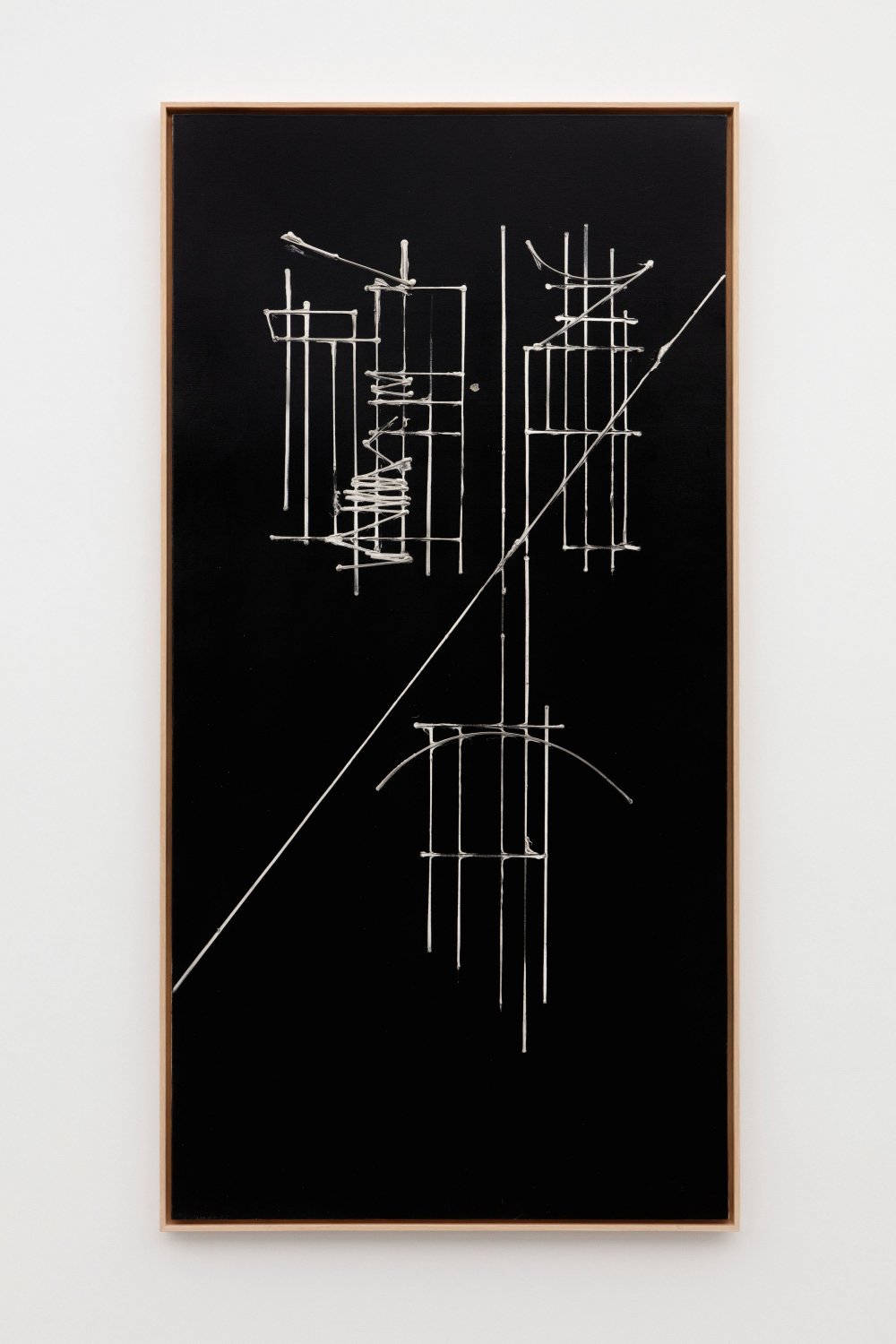 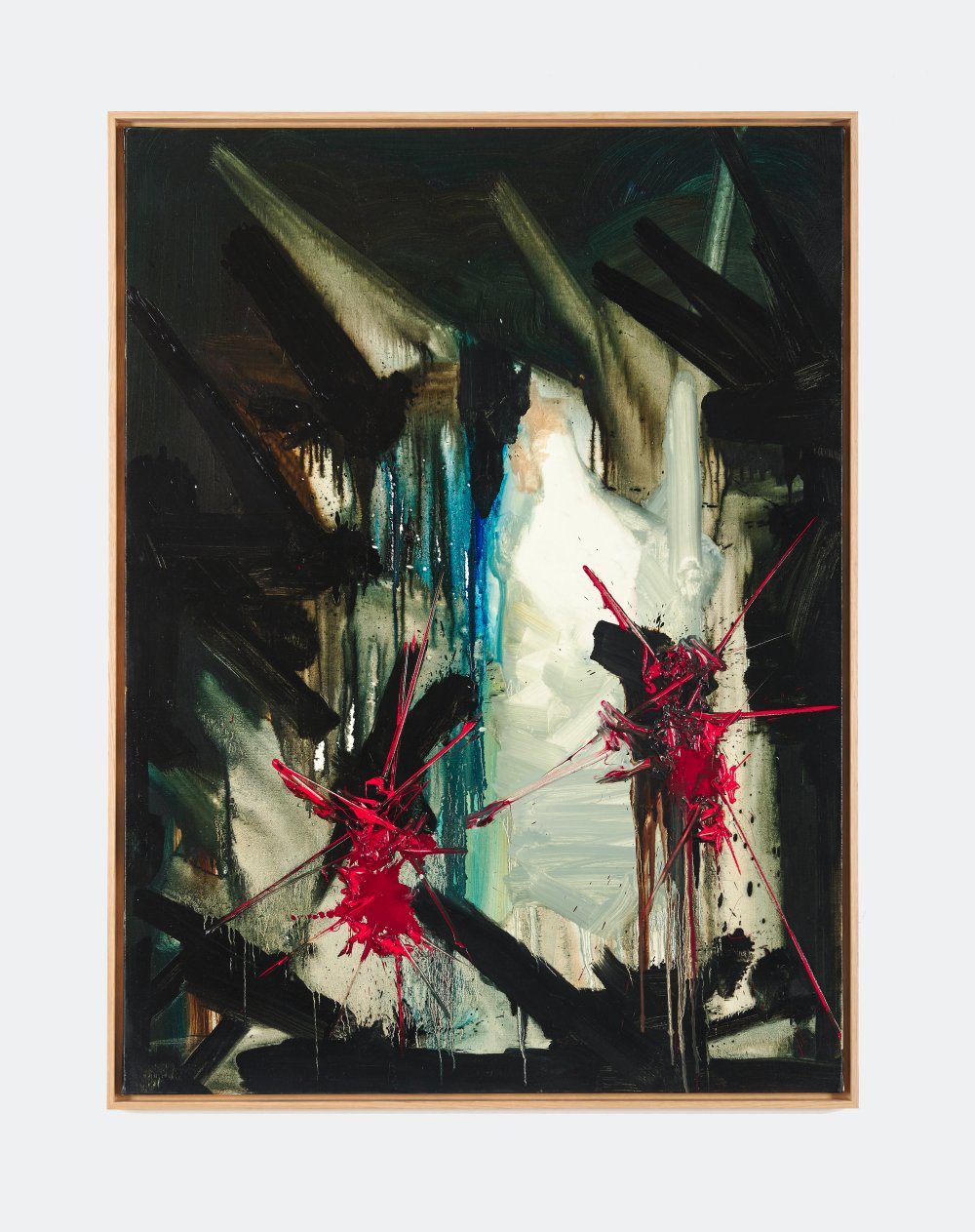 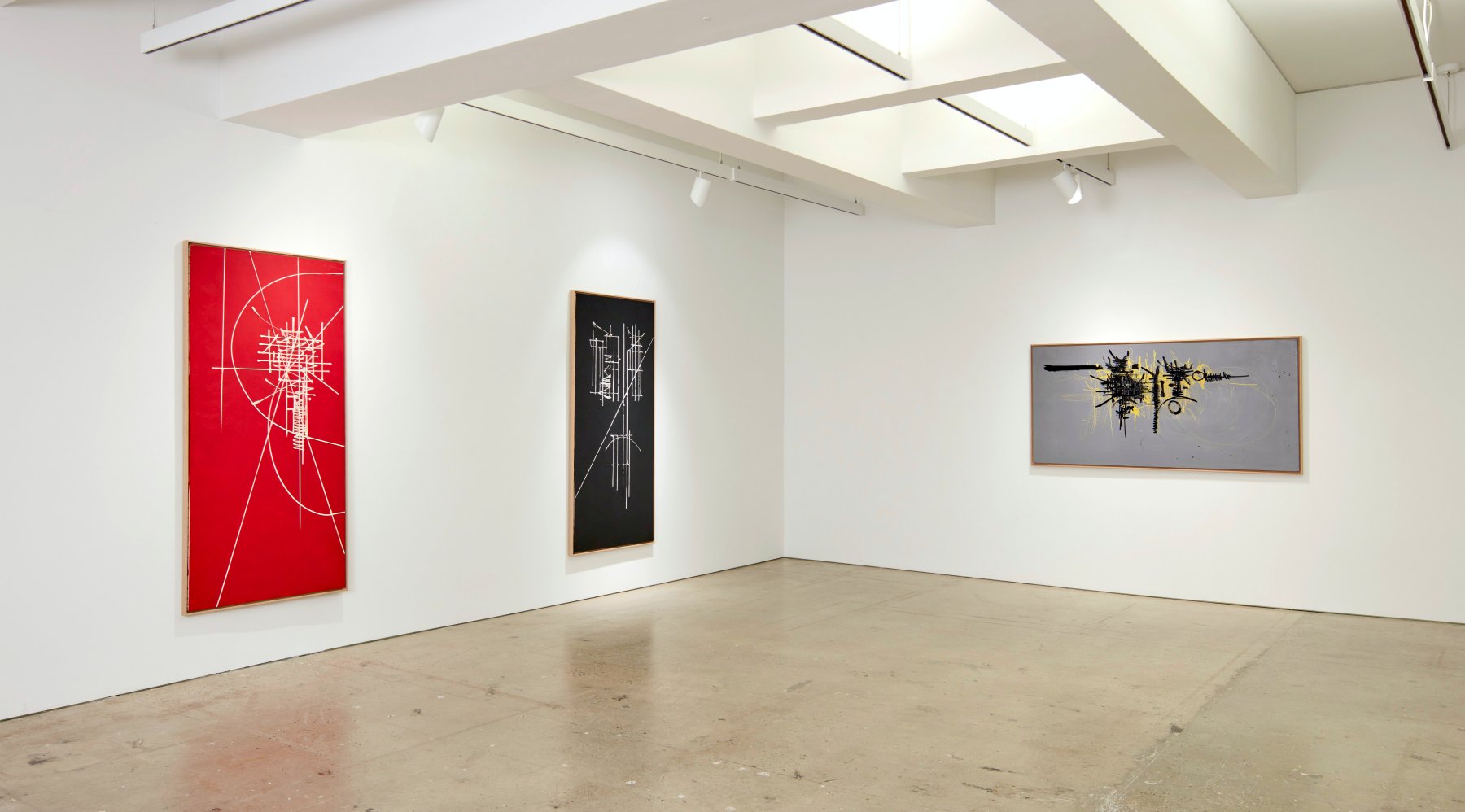 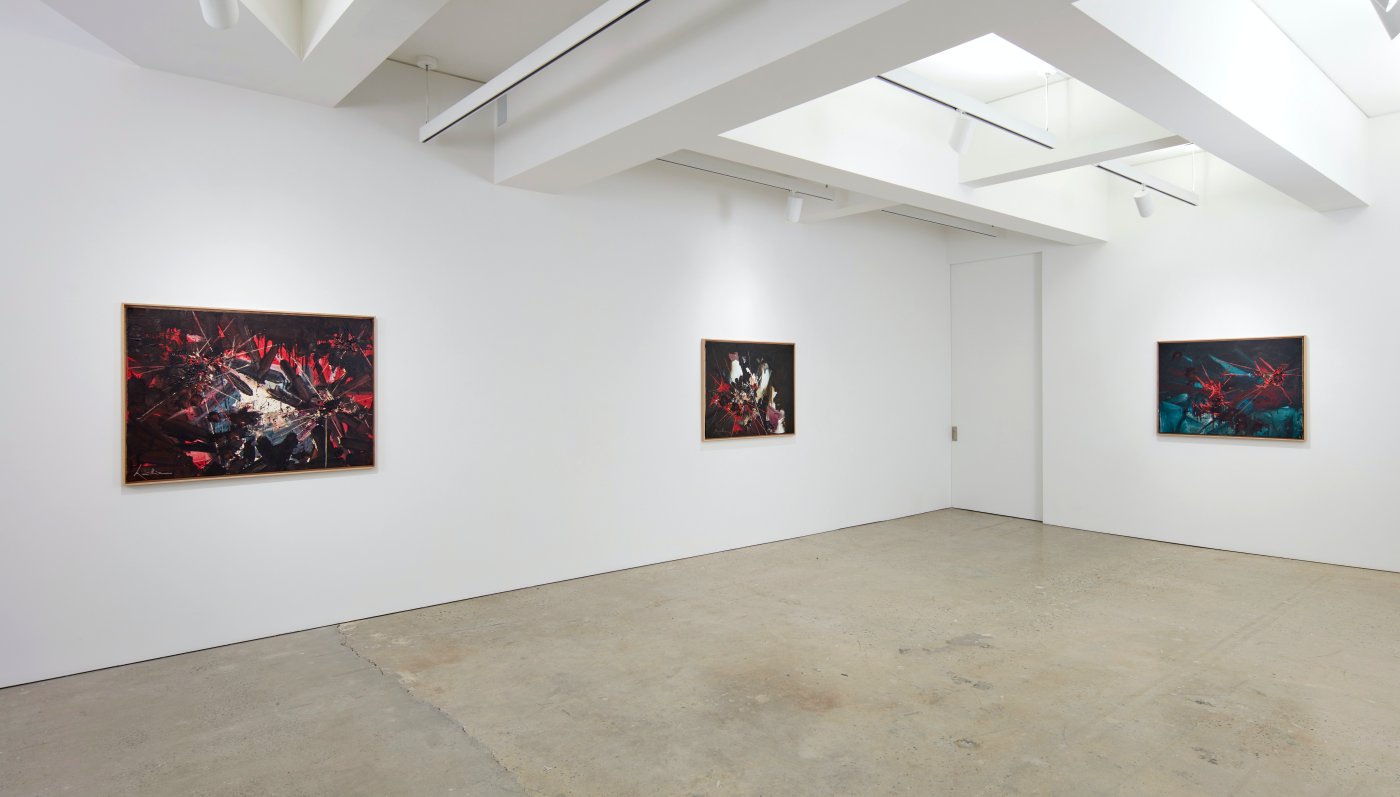 Spread across two New York venues, the presentation reevaluates Mathieu’s significant contributions to the development of post-war abstraction. As a key pioneer of Action Painting, the exhibition will pay particular attention to the artist’s monumental paintings, which exemplify his commitment to the encounter between body and canvas, and which will be presented for the first time in New York. Concurrently, we will publish an expansive monograph on George Mathieu’s life and work, with an essay by Germano Celant and an interview of Nancy Spector.

Georges Mathieu was one of the foremost French artists active during the 1950s and 60s. The centenary of his birth offers an ideal occasion to look back at the career of an artist and theorist who dedicated his life to an emotive, gestural, and highly nonrepresentational form of abstraction that had no correlative in the empirical world. The founder of Lyrical Abstraction, a movement that rejected the legacy of European geometric abstraction launched by Picasso’s Cubism and Mondrian’s De Stijl, Mathieu deeply influenced generations of artists working in the realm of performance and action-based painting. — Nancy Spector

Playing a decisive role in postwar painting, Mathieu diverted from the geometrical abstractions dominating the previous era by forging a visual language that favored form over content and gesture over intent, and harnessed uninhibited creative expression. During the 1950s, Mathieu executed large canvases before audiences, a performative aspect that rivaled Gutai, the Japanese avant-garde group, and anticipated the work of Yves Klein and the “Happenings” in the United States. In 1952, Alexander Iolas gave Mathieu his first solo U.S. exhibition at the Stable Gallery. On the occasion of the show, The New York Times called the artist, “one of the most fervid of contemporary French abstractionists,” and in 1954, the newspaper affirmed him an abstract expressionist as powerful in Paris as Willem de Kooning is for Manhattan. Clement Greenberg considered him, “the strongest of all new European painters. Georges Mathieu, the transatlantic painter I admire most.”

Despite Mathieu’s ardent popularity at the onset of his career and the extensive acquisition of his paintings by major American and European museums early on, the artist has largely been overlooked in recent decades—his last major exhibition in the United States took place forty-two years ago at Wildenstein gallery in New York. As such, this exhibition offers a unique opportunity to reintroduce Mathieu’s work and interpret the development of his art and his legacy with a fresh perspective. The show will take place at both Nahmad Contemporary and Perrotin galleries in New York and will feature an ensemble of over 50 major paintings of every period, ranging from the 1950s to the last paintings executed in the 1980s and early 1990s.

This celebratory exhibition will present works from the artist’s private collection, many of which will be exhibited for the first time. Additionally, the show will also include important works from museums and institutions such as the Albright- Knox Art Gallery, Buffalo; The Michigan State University; the Museum of Fine Arts, Houston; the Phillips Collection, Washington DC; and the Wadsworth Atheneum, Hartford. At the occasion of the centennial of the artist and to accompany the exhibition, an important monograph will be published in English and French with exclusive archival material and essay by chief art historian Germano Celant, and a transcribed interview by leading museum curator, Nancy Spector.

More information about the artist

Georges Mathieu (b. 1921, Boulogne-sur-Mer, France; d. 2012, Boulogne-Billancourt, France) began to paint in 1942 at the age of 21 after studying languages, literature, law and philosophy at a variety of institutions in France. His professional life extended beyond painting to include roles as a professor, interpreter, public relations director, writer and theorist. The artist participated in many other cultural endeavors that allowed for artistic engagement with the public. He advocated for the presence of art in France’s national education system, contributed to urban architectural plans and designed travel posters, television logos, stamps, and over 100 million of the 10-franc coin. His work has been the subject of numerous retrospectives, including those at Musée d’art moderne de la Ville de Paris (1963); Grand Palais, Paris (1978); and Jeu de Paume, Paris (2002). Other notable solo exhibitions were presented at the Institute of Contemporary Arts, London (1956); the Kunstmuseum, Basel (1958) ; the São Paulo Museum of Modern Art (1960); the Musée des Beaux-Arts de Nantes, France (1966); and Maison de la Culture, Rennes, France (1969). His work is currently held by more than 80 museums and public collections, including the Art Institute of Chicago; the Centre Georges Pompidou, Paris; the Hirshhorn Museum and Sculpture Garden, Washington, DC; the Kunstmuseum Basel; the Kunsthaus Zurich; the Museum of Contemporary Art, Los Angeles; the Museum of Fine Arts, Houston; the Museum of Modern Art, New York; the Musée National d’Art Moderne, France; the Solomon R. Guggenheim Museum, New York; and the Tate, London.