‘I love to draw and in the usual context of privacy,

one doesn’t think of the term isolation or forced separation,

rather it’s a space to create without being watched.’

The online exhibition from Hauser & Wirth features a new group of drawings by George Condo which are related to his most recent painting series ‘Distanced Figures.’ Made during the last three weeks, in the artist’s home studio in New York state, these portrait drawings are evocative of the experience of isolation during this unsettling period of social distance. Depicted in crayon, pencil and ink, overlapping figures are layered, combining multiple viewpoints to reflect different emotions occurring simultaneously; fear, paranoia, claustrophobia, panic and distress are portrayed in this particular group of drawings but handled with such beauty, elegance and resolve as to provide an antidote. Condo describes the figures in this new series of works as ‘distanced from one another or in fact even distanced from themselves.’

Condo is a defining figure of contemporary American painting. Drawing constitutes a rich strand of his creative practice which has continually evolved over the past four decades. As in previous works, Condo’s ‘Distanced Figures’ synthesize pictorial languages and motifs to create what he describes as ‘composites of various psychological states’. The themes in the drawings not only respond to our current situation and the absence of human contact, they are a continuation of the recurrent themes in the artist’s work. In earlier paintings, such as ‘Separated by Life’ (1986), the physical detachment between figures indicates underlying psychological states of disconnection. The figures in this new series of works often appear in pairs, linked by intersecting lines, yet their viewpoints do not connect. 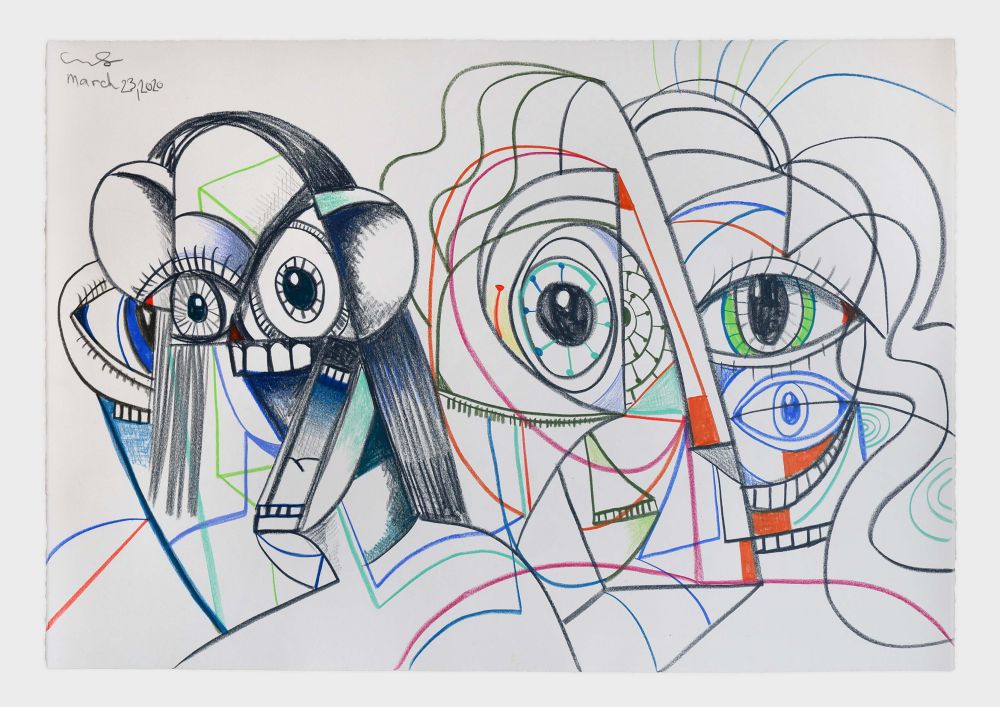 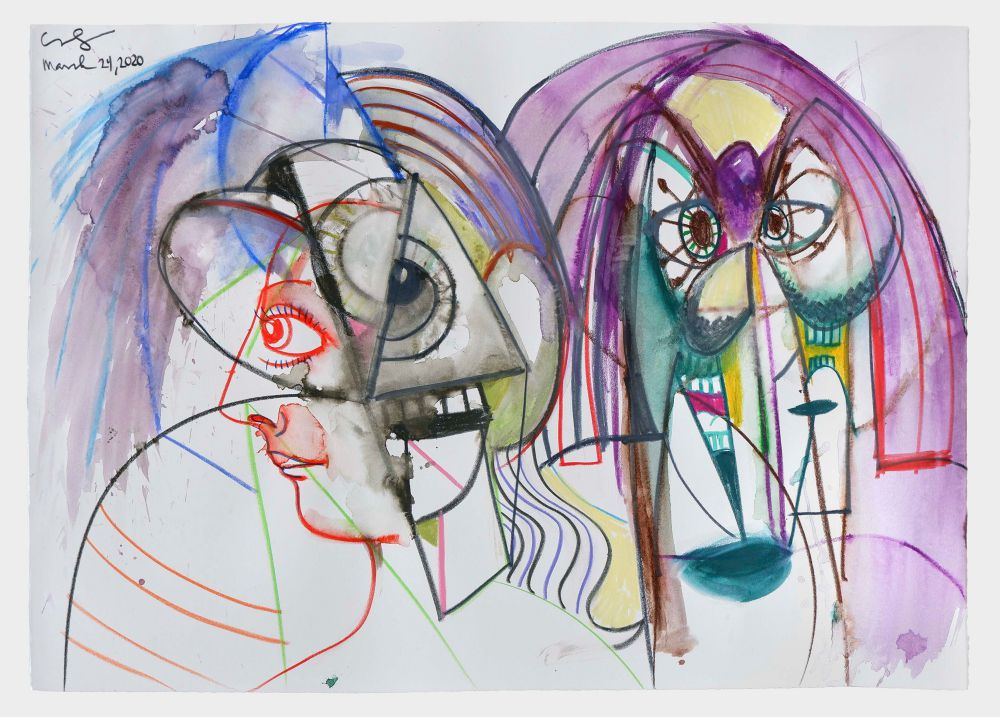 For Condo, the condition of isolation also carries positive connotations of seclusion in the studio space. He explains: ‘I love to draw and in the usual context of privacy, one doesn’t think of the term isolation or forced separation, rather it’s a space to create without being watched.’ The concept of improvisation and the immediacy of a drawing is central. Drawing quickly and freely, he likens the tempo of a piece of music to the tempo of a drawing. In this respect, Condo’s training in classical music is important to his process of artmaking, he believes that ‘artists should paint up-tempo without missing a stroke, in the same way that musicians like Jimi Hendrix or Glenn Gould play without missing any notes. There is also the same degree of attention necessary when drawing slowly, as one may find in a Sarabande of Bach.’

Condo also likens the freedom and intimacy of drawing to ‘walking through Birnam Woods trying to chase down the trees.’ The drawings in this exhibition provide unparalleled insight into the cathartic experience of artmaking in the time of lockdown. 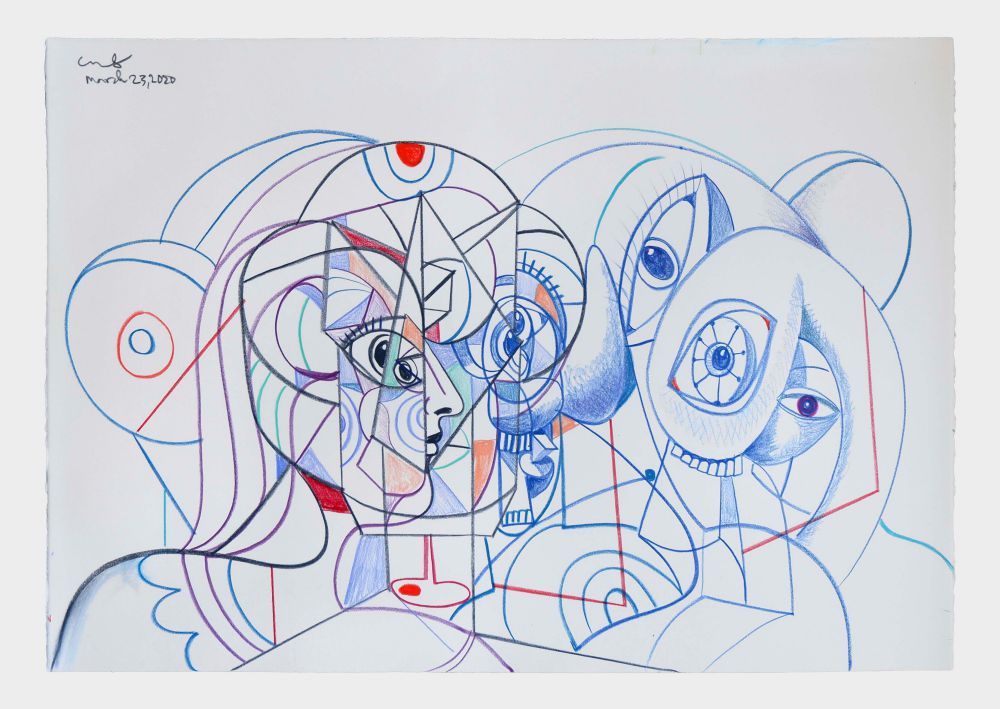 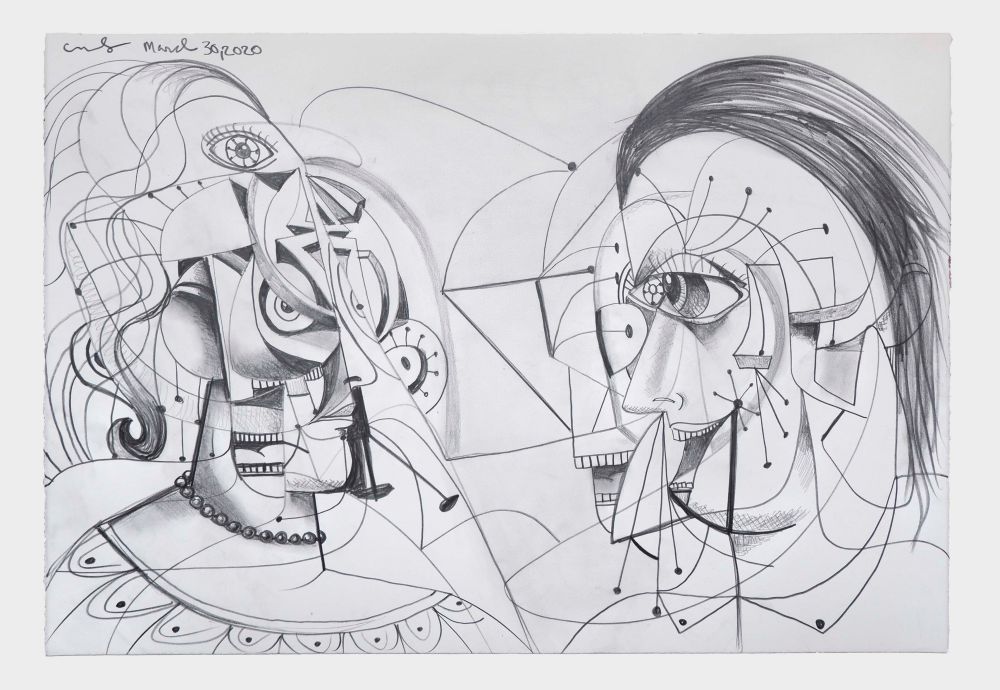 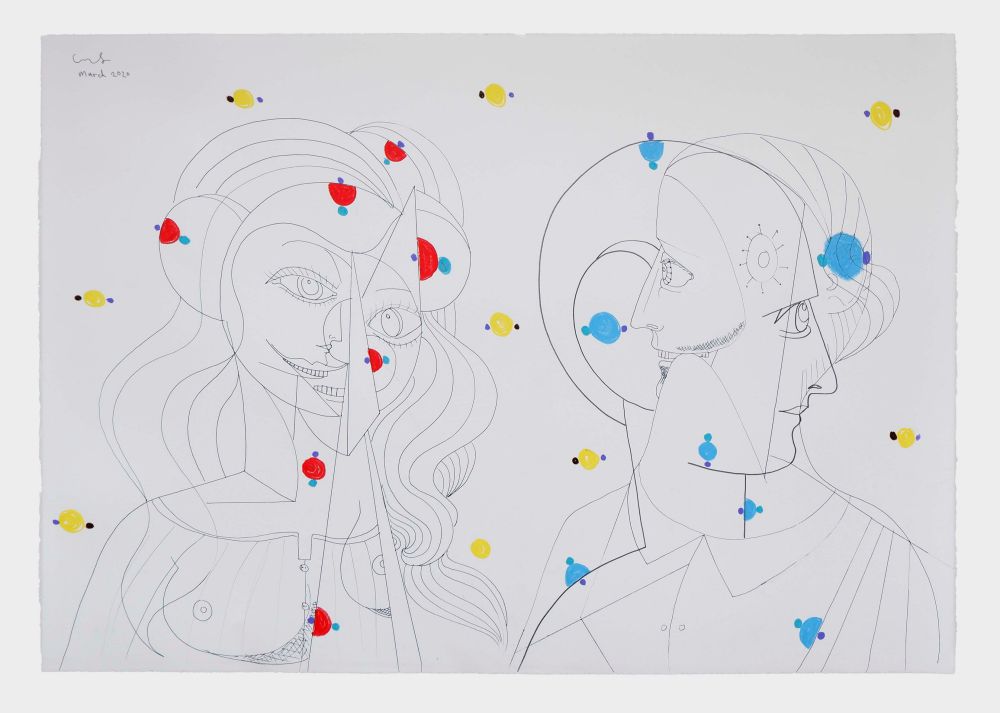 Born in Concord, New Hampshire in 1957, George Condo lives and works in New York City. He studied Art History and Music Theory at the University of Massachusetts in Lowell before relocating to New York, where he worked as a printer for Andy Warhol. In 1985, Condo moved to Paris, subsequently spending a decade in Europe. During this period, Condo invented his hallmark ‘artificial realism’ and made his first foray into sculpture.

Condo’s work has appeared in a number of solo exhibitions including ‘Confrontation’ in 2016 at the Staatliche Museen zu Berlin – Museum Berggruen in Berlin, Germany, work by Condo was presented alongside some of his major art historical reference points: masterpieces by Cézanne, Picasso, Matisse, Klee, and Giacometti. In 2011-2012 a mid-career survey of Condo’s portraiture entitled ‘Mental States’ travelled from the New Museum, New York to the Museum Boijmans Van Beuningen, Rotterdam, Netherlands, Hayward Gallery, London, United Kingdom, and Schirn Kunsthalle, Frankfurt, Germany.

In addition to this, Condo’s work has appeared in numerous biennials internationally. Including the Venice Biennale in 2019 and 2013, the 13th Biennale de Lyon in 2015, the 10th Gwangju Biennale in 2014 and the 2010 and 1987 iterations of the Whitney Biennial among others. Condo’s work can be found in numerous renowned public collections internationally including: Centre Georges Pompidou, Paris, France; Tate Modern, London, United Kingdom; The Broad Collection, Los Angeles CA; The Metropolitan Museum of Art, New York; The Museum of Modern Art, New York, The Solomon R. Guggenheim Museum, New York NY; and the Whitney Museum of American Art, New York among many others.

Hauser & Wirth will donate 10 percent of profits from online exhibitions, including 'George Condo. Drawings for Distanced Figures', to the COVID-19 Solidarity Response Fund for WHO. This is part of a new philanthropic initiative #artforbetter, through which Hauser & Wirth will provide charitable support to both global and local causes.