To visit the exhibition, book a timed reservation here.

Unfolding across the entirety of both the gallery’s London spaces, this exhibition is dedicated exclusively to the works of George Condo, a defining figure of contemporary American painting. The exhibition brings together new drawings and paintings depicting states of mind captured in an abstract web that reveal the humanity inherent within fragmented psyches. 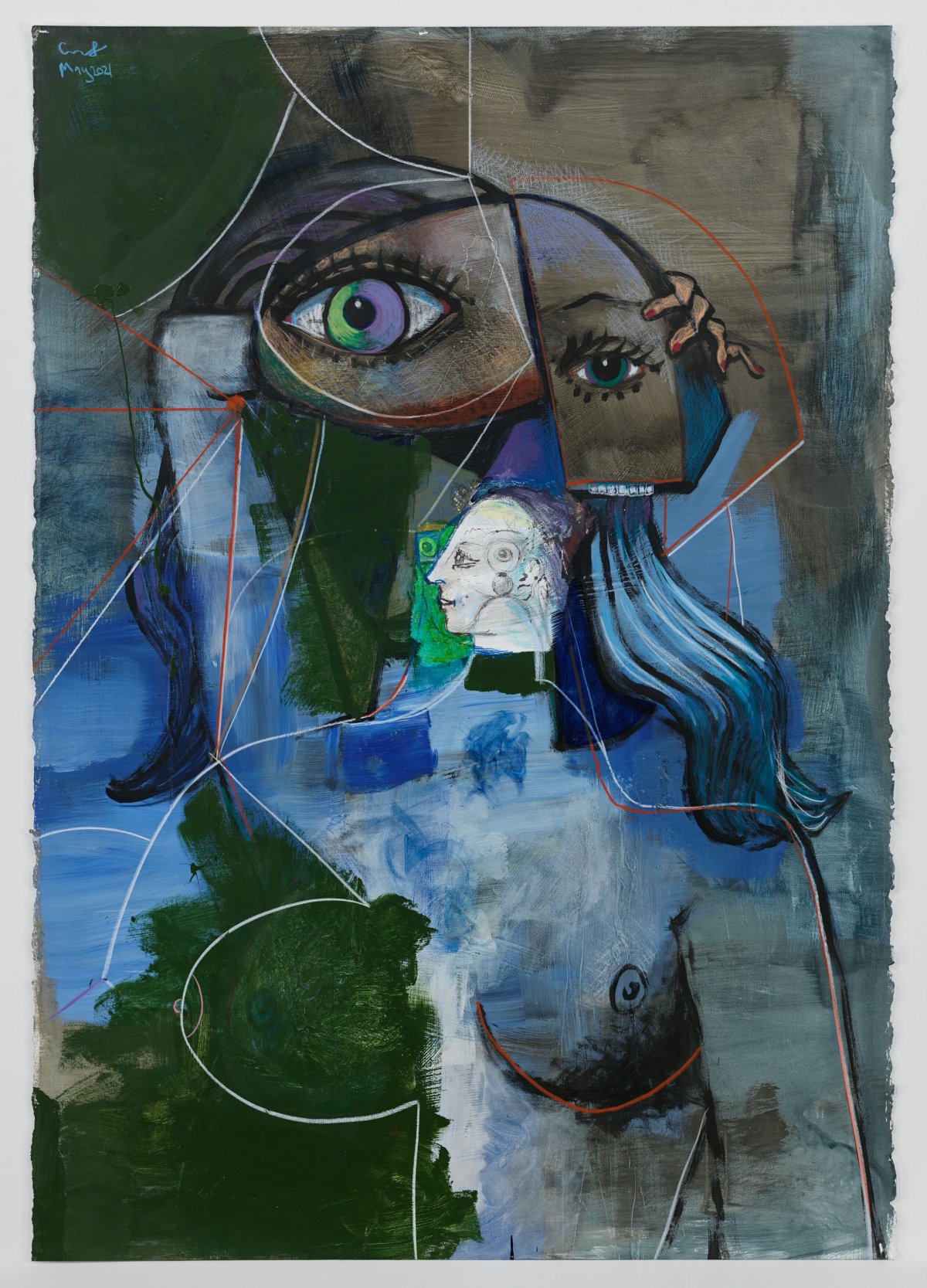 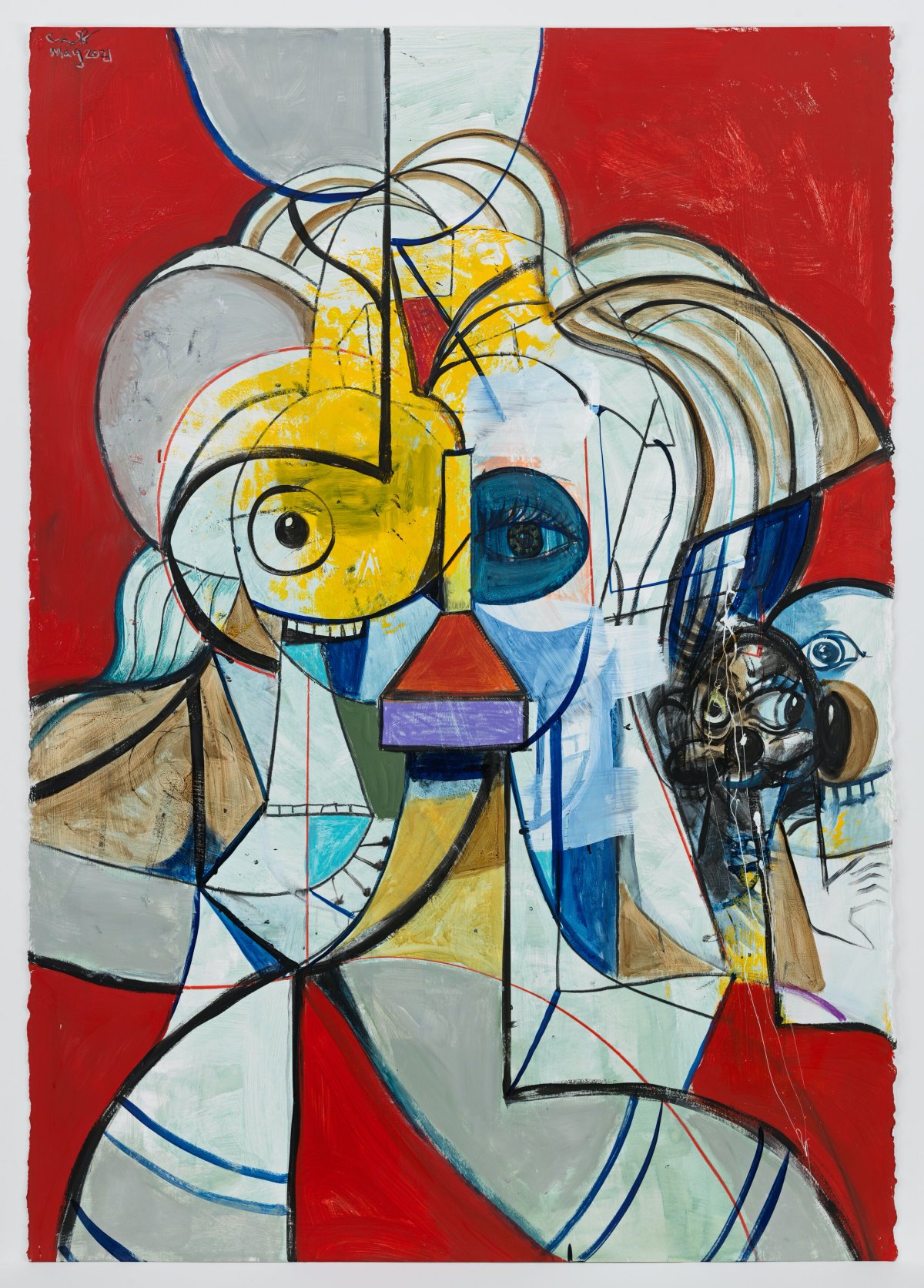 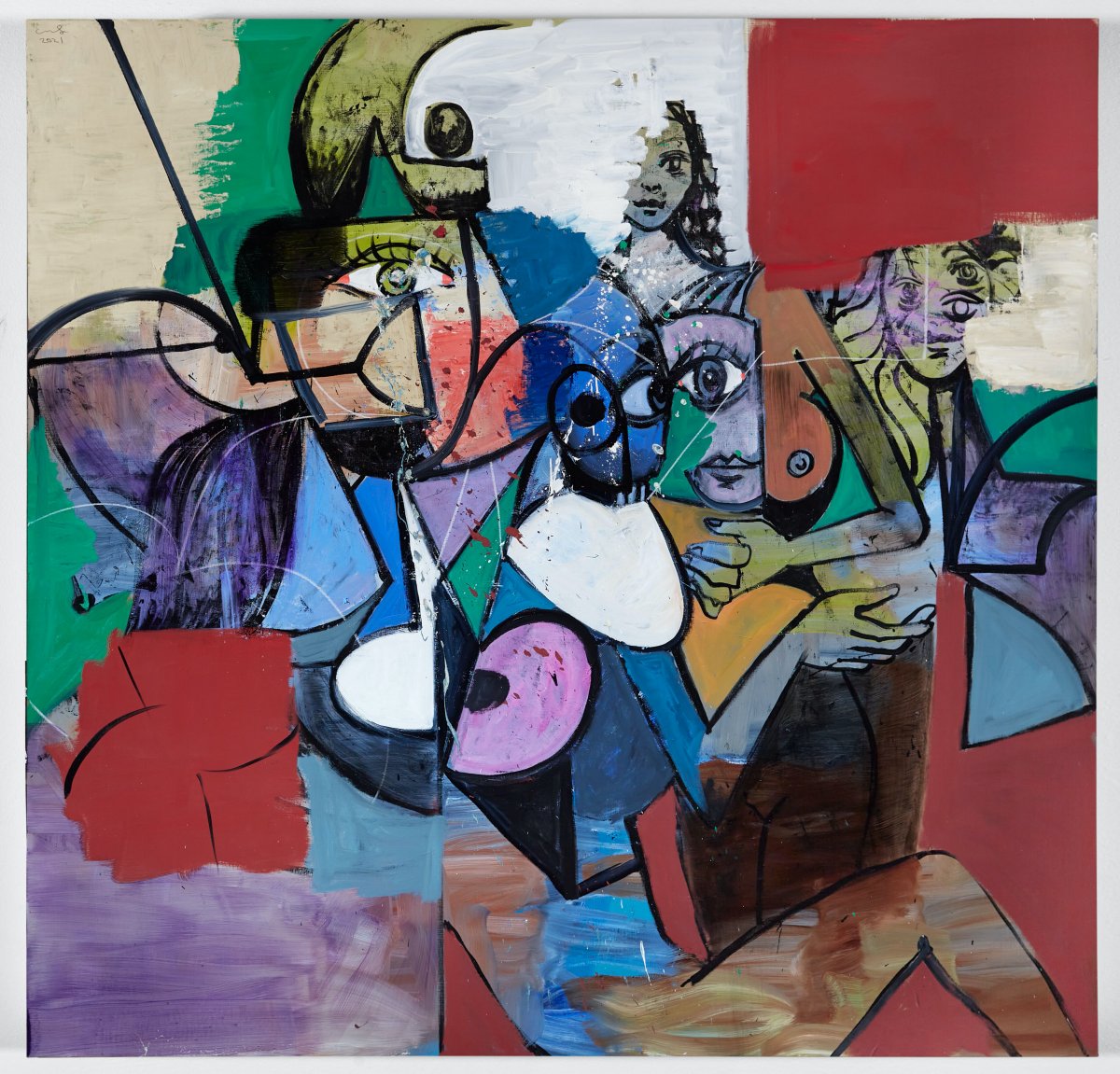 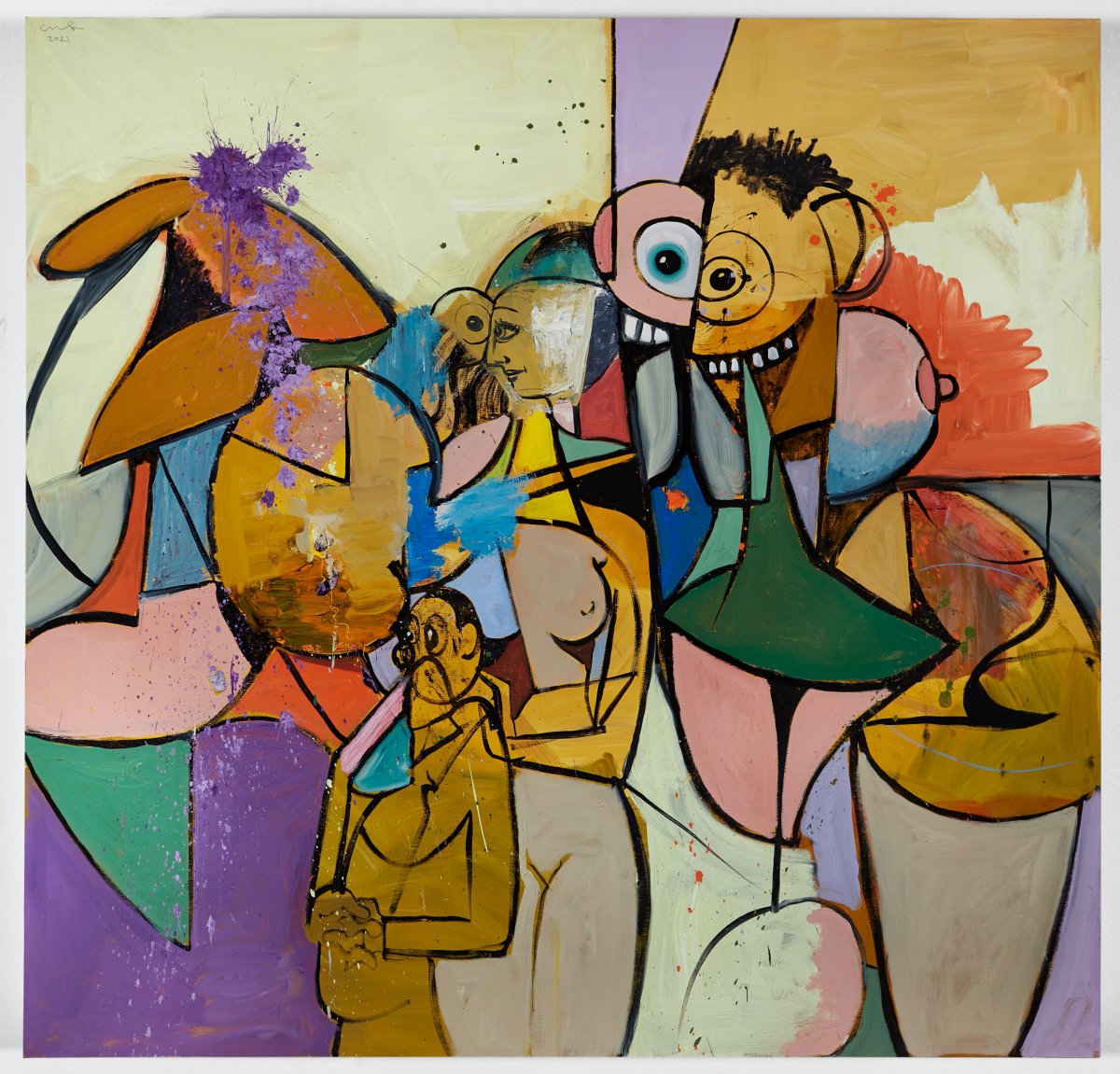 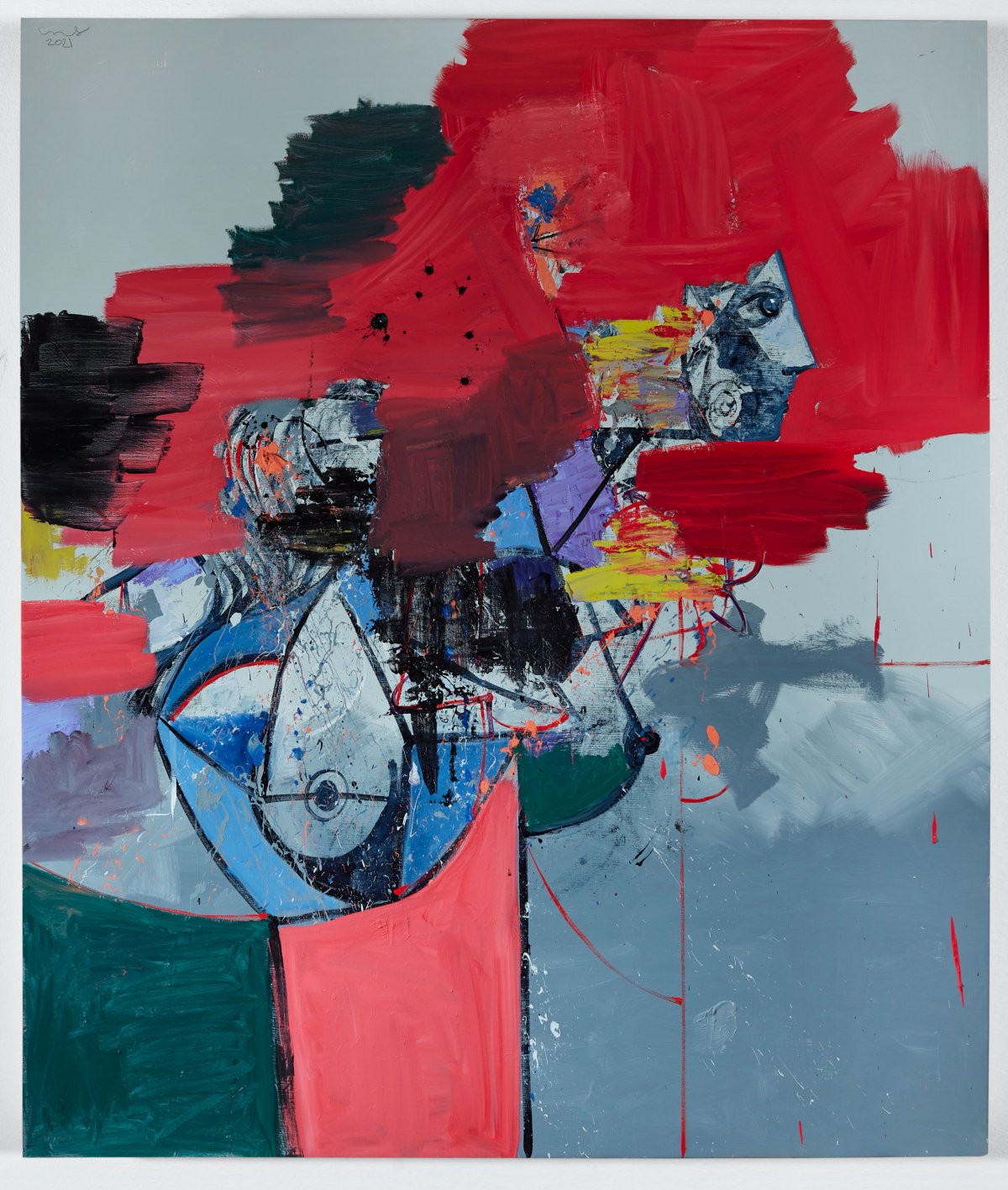 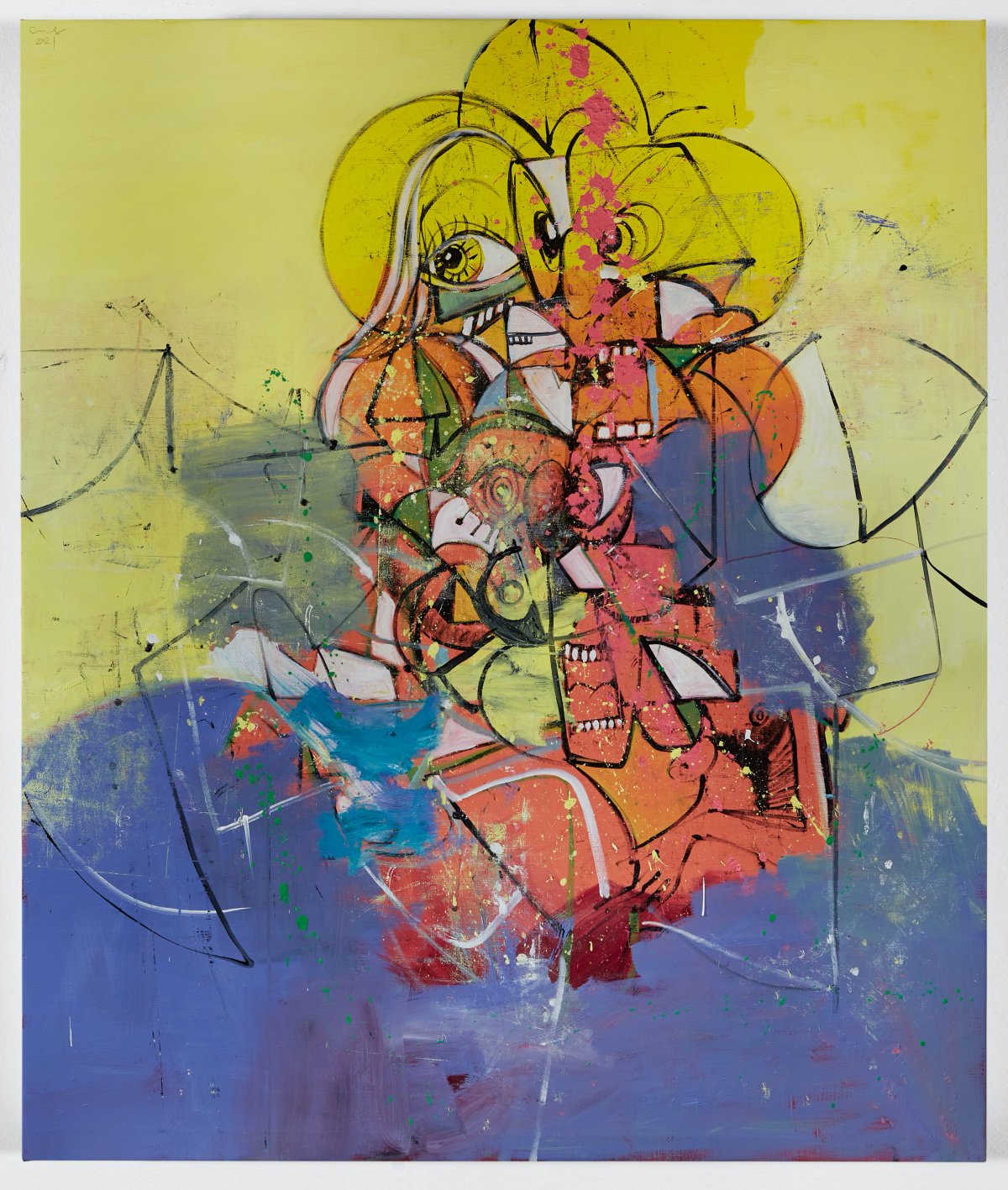 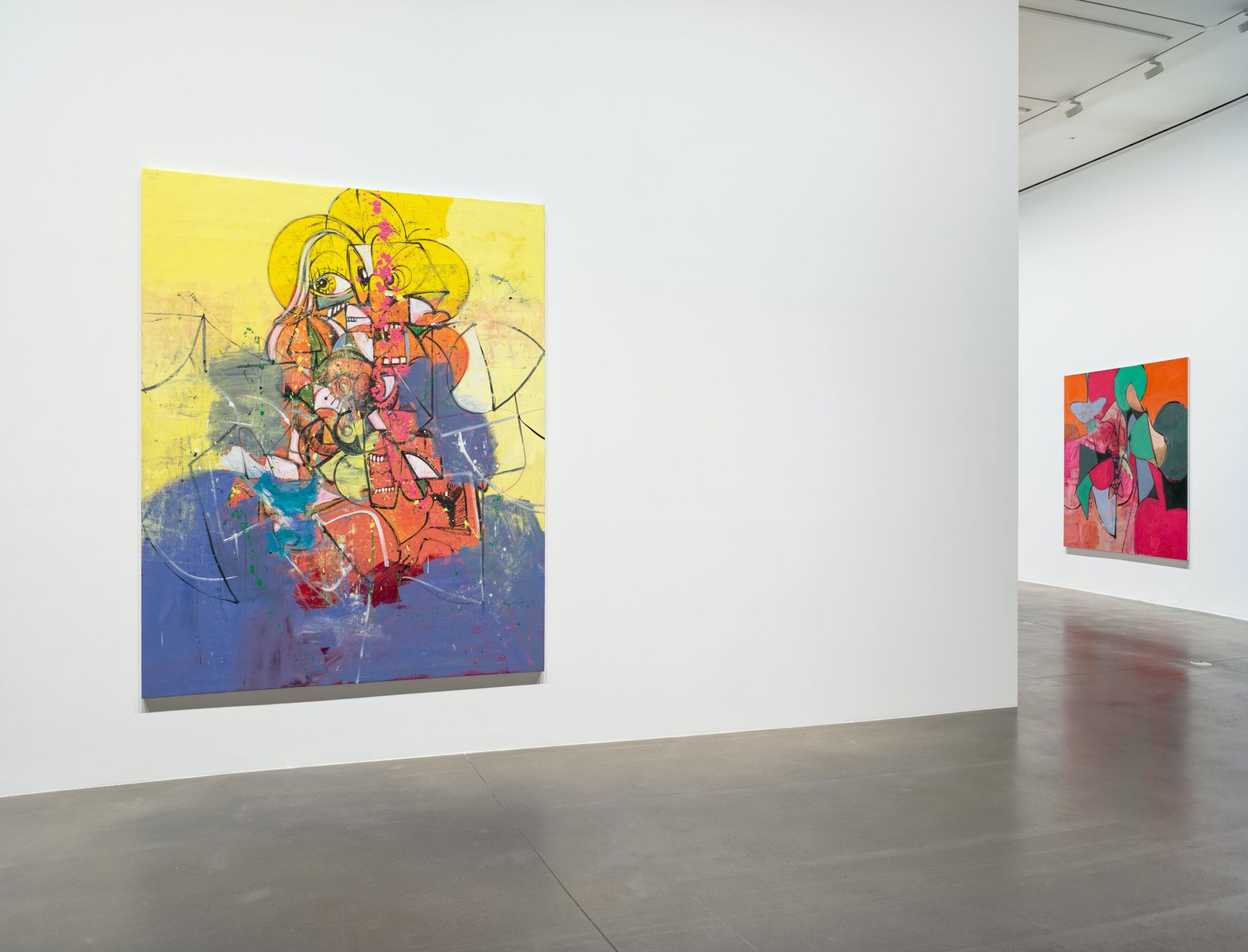 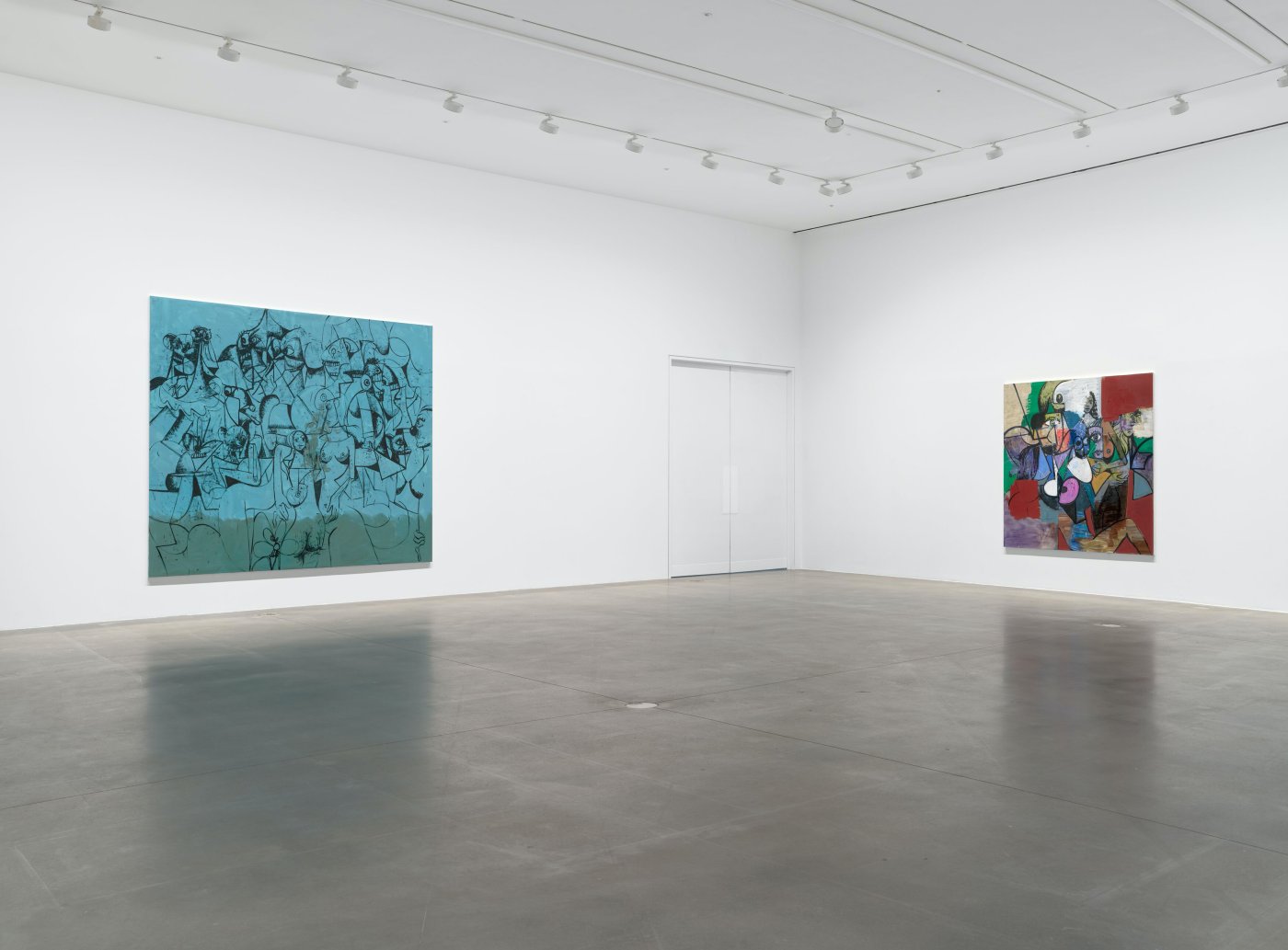 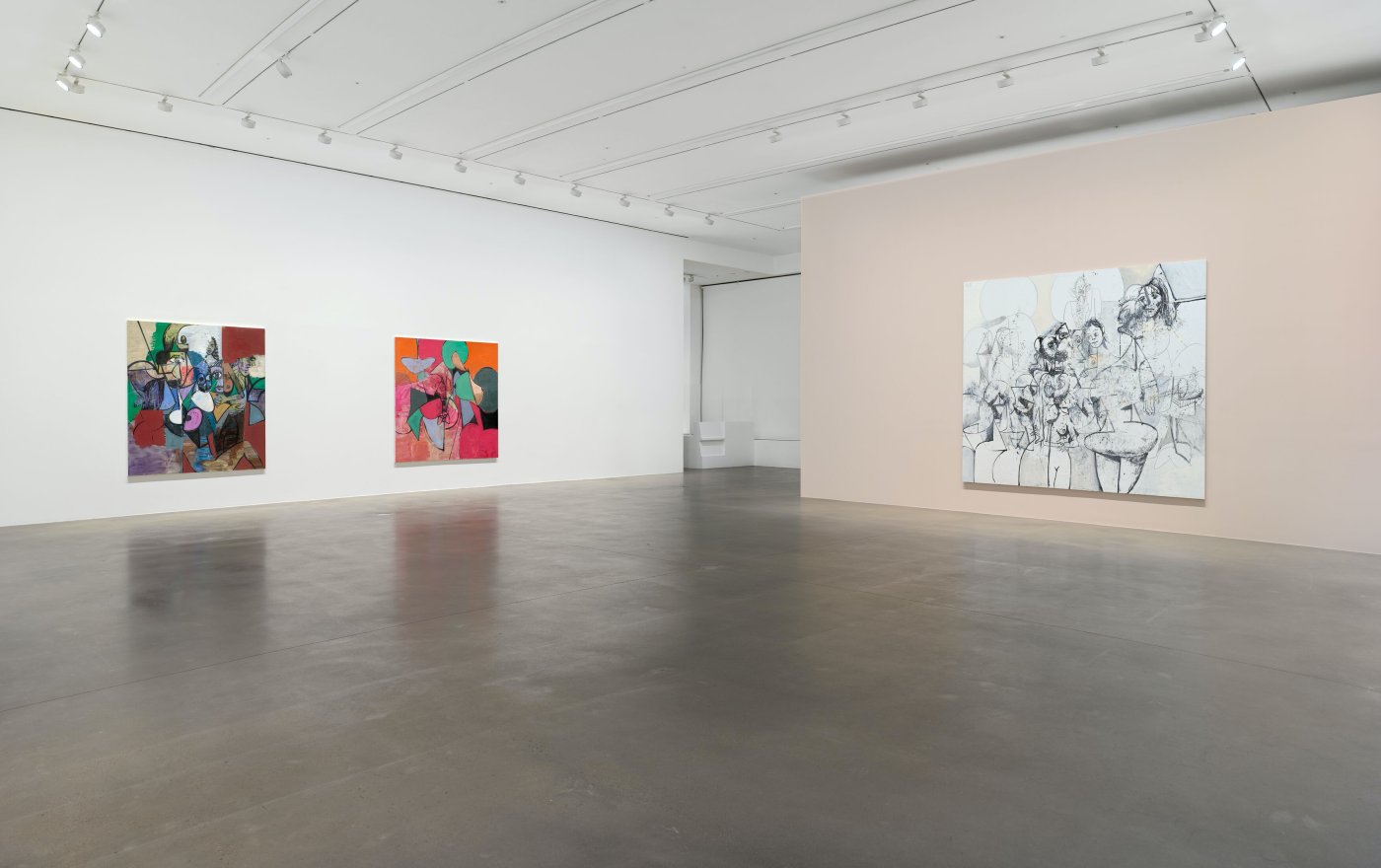 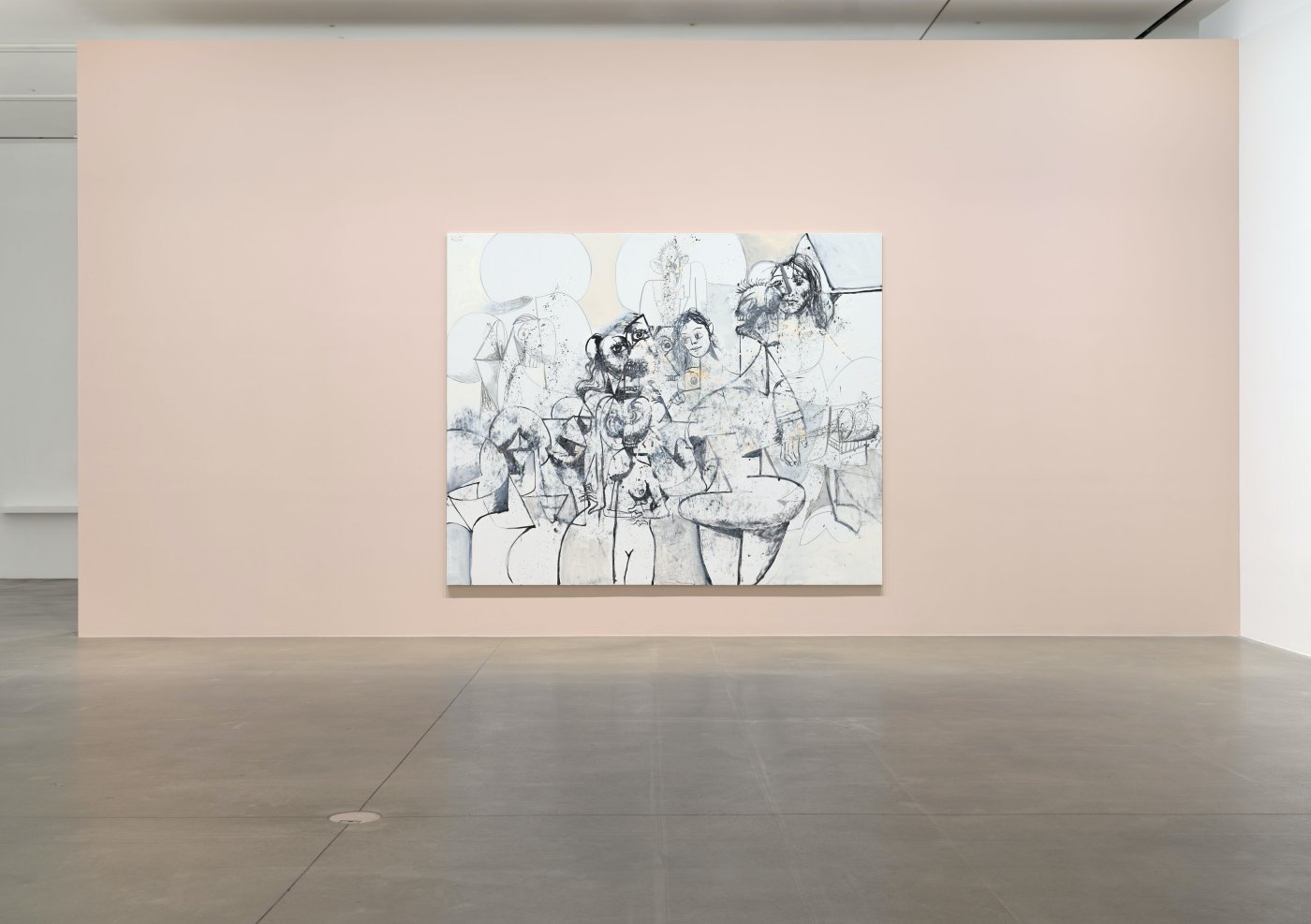 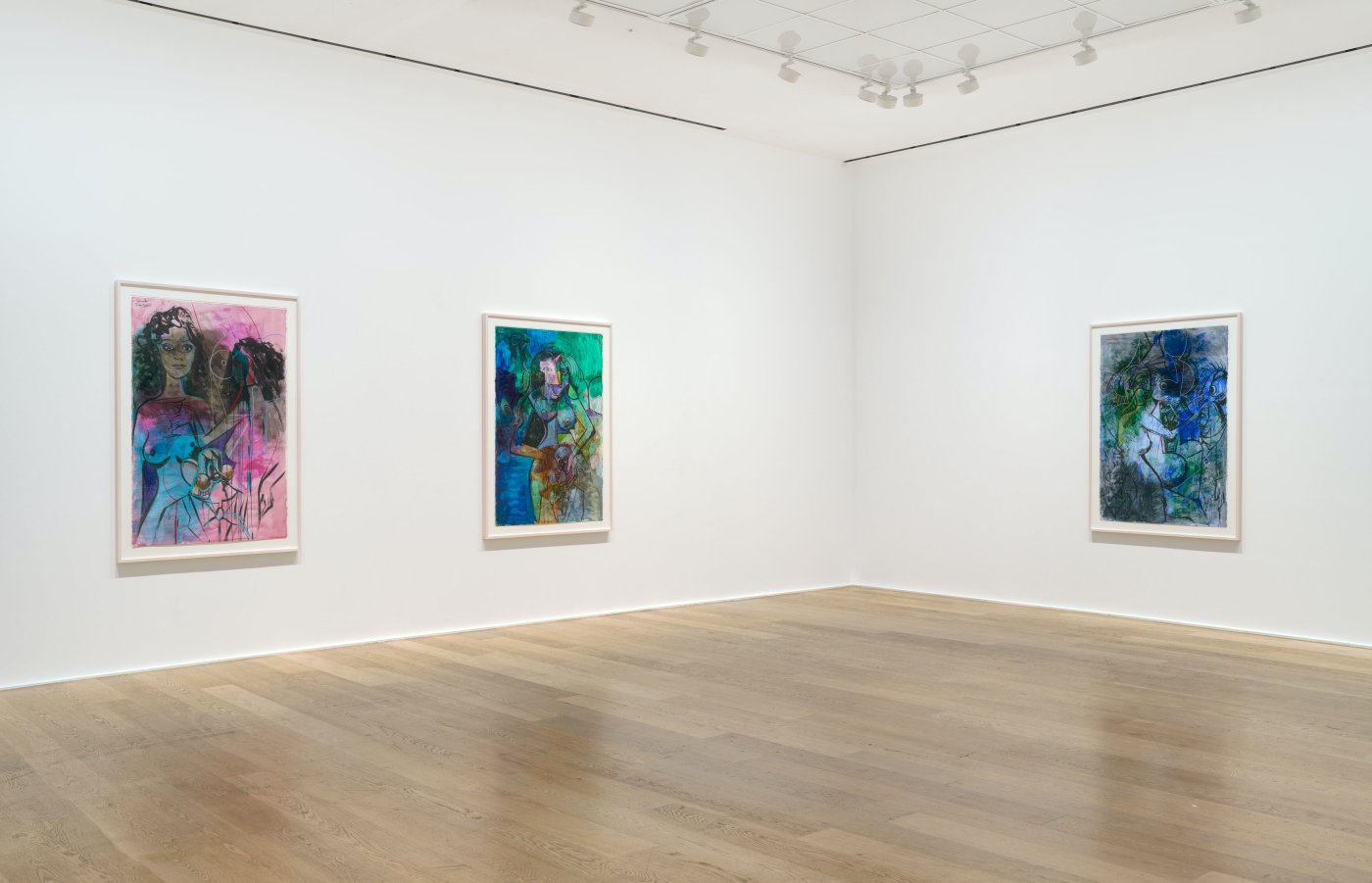 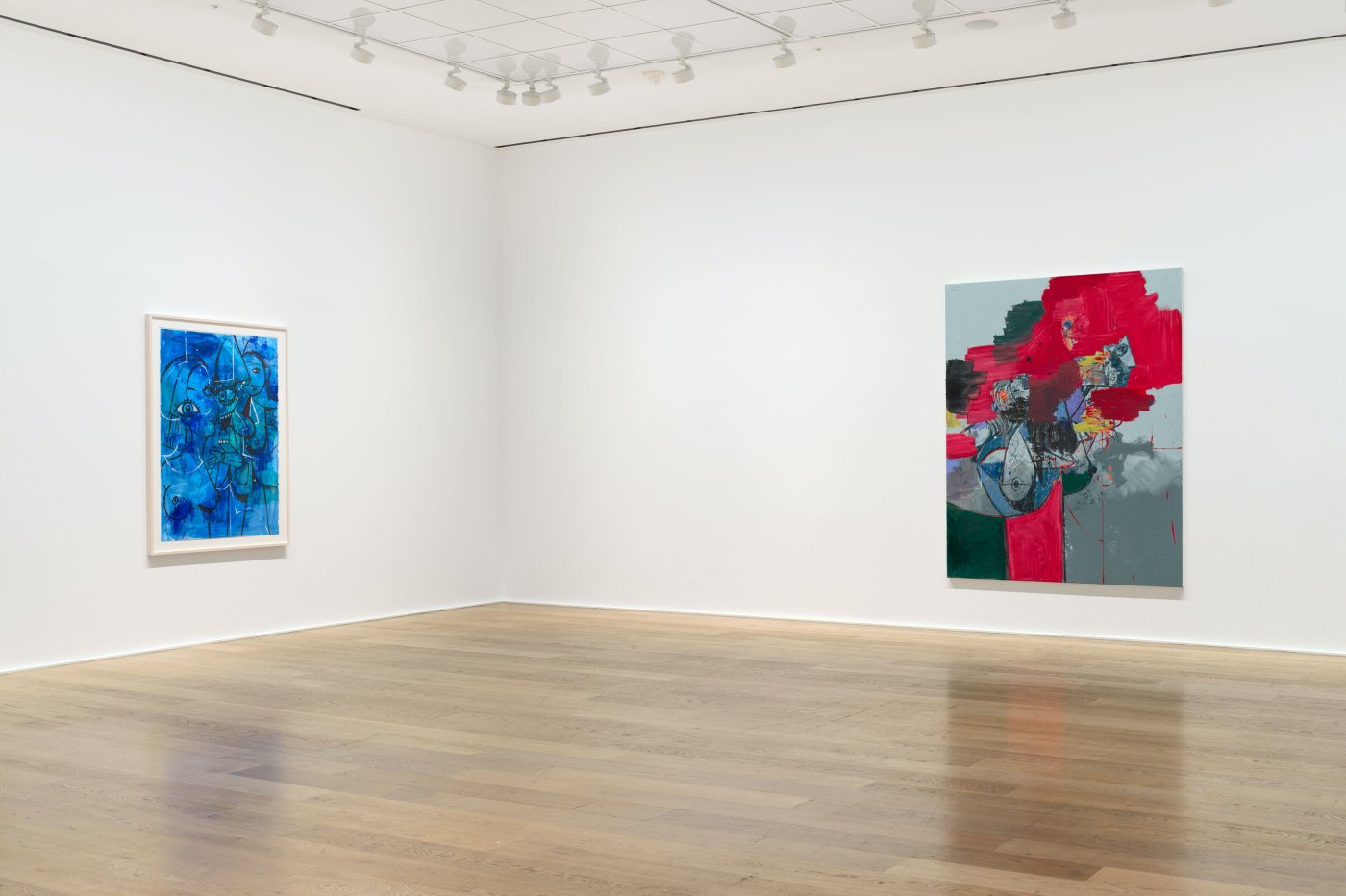 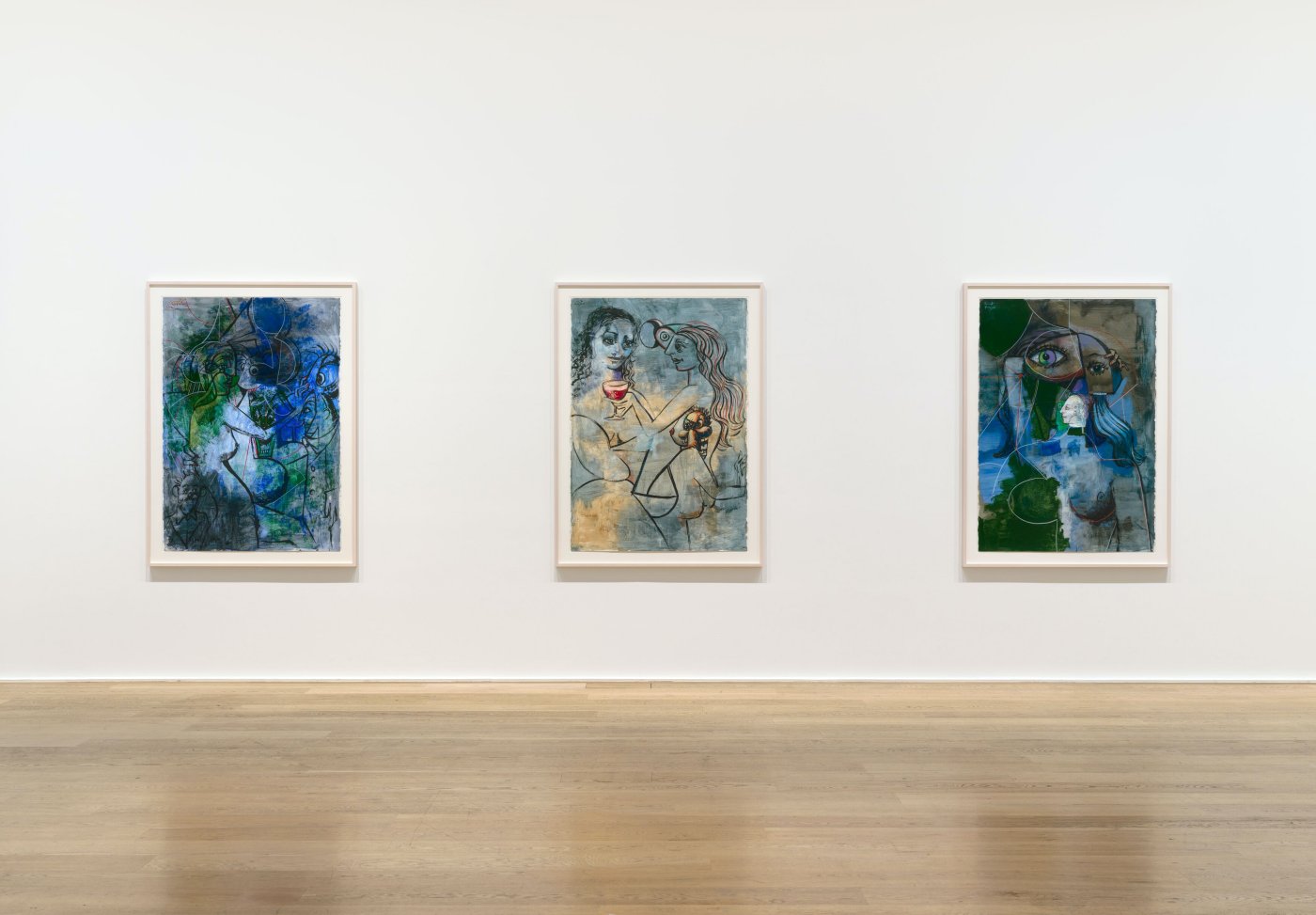 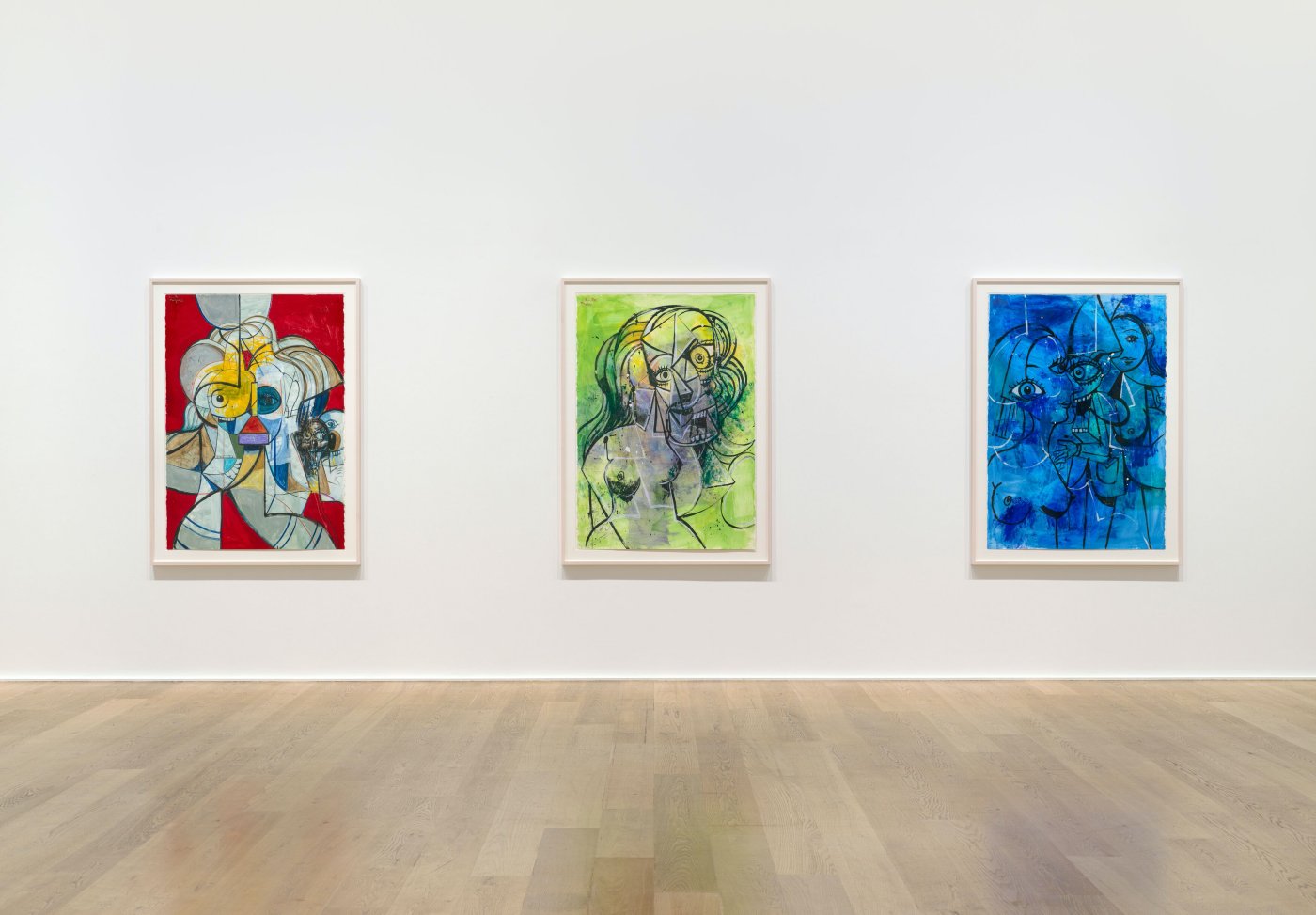 The portraits reflect a range of emotions simultaneously occurring within us, buried deep within our collective subconscious, revealing themselves through the figurative form. Condo has forged a relentlessly inventive path, deploying technical skill and canonical knowledge to channel the painterly modes of American and European art history into works of astonishing originality. Opening 25 September 2021, the Long Museum in Shanghai will also present the largest solo exhibition by George Condo in Asia to date, which will feature up to 150 works by Condo.

Condo synthesizes a vast number of past pictorial languages and motifs to create, as he has put it, ‘composites of various psychological states painted in different ways.’ Often the presence of multiple historical moments can be felt in a single work. The new drawings and paintings on show are portraits, not of living individuals but of invented characters, represented in ways that combine various viewpoints to reflect different emotions erupting simultaneously. Condo describes the figures, in works such as ‘Shadows and Light’ (2021), as ‘interacting in the shadows’, likening them to the way that light shines through gaps between trees in the forest; this is reflected throughout the exhibition in works such as ‘The Day I Stopped Drinking’ (2021) where an eye or a mouth can be seen peeping through the thicket of the composition. These characters are partially erased by the deconstructive process of painting. Condo achieves this effect by first choosing challenging colour combinations to draw initial figures and forms, followed by a process of erasure with new layers of paint, thus only allowing certain elements of the original forms to survive. As well as capturing the complex mind of a person, Condo’s portraits have taken on landscape painting qualities, where gestural paint strokes resemble things we might see in the natural world; works in the exhibition such as ‘Escape from Humanity’ (2021) embody this as mental landscapes in and of themselves.

While Condo’s practice has undergone a series of shifts and steady evolution over the years, his life-long love of drawing and music remains constant. Drawing constitutes an important aspect of the artist’s creative practice in its own right. He uses the terms ‘rhythm’ and ‘tempo’ to describe the process of drawing and the freedom it brings, and often likens this process to jazz music which retains a core order, following a musical progression, and allowing for increased spontaneity and improvisation – this process plays an important part in this new body of work more than ever before. Condo revels in the complexity of his works saying, ‘I like to make it complicated for myself in terms of colours and tonality … it makes it more interesting to find my way through it all, to give it a shape, a form, a balance.’ The chaos that is present in the world is a driving force for creation and he sees his works as ‘harmonic resolutions’ to radical divisive elements in society. The process of making art is a way for Condo to resolve these tensions, a form of personal conflict resolution via painting and drawing. Paintings including ‘A Day in the Park’ (2021) and ‘The Day They All Got Out’ (2021) display this dialectical paradigm – his harsh lines and colours provide a structure that allows the figurative forms to roam free, as if the lockdown had unleashed a mad rush to escape from shelter. Ultimately, these works are portraits of Condo’s mind, and his intention is that others will see their own minds reflected as well.

Condo’s major retrospective, ‘The Picture Gallery’, at the Long Museum in Shanghai is curated by Massimiliano Gioni, and will feature paintings made throughout the artist’s career and will debut a new series of large-scale canvases made specifically for this presentation.

About the artist
Born in Concord, New Hampshire in 1957, George Condo lives and works in New York City. He studied Art History and Music Theory at the University of Massachusetts in Lowell before relocating to New York, where he worked as a printer for Andy Warhol. In 1985, Condo moved to Paris, subsequently spending a decade moving between New York and Europe. During this period, Condo invented his hallmark ‘artificial realism’ and made his first foray into sculpture. His 11ft gold leaf scultpure ‘Constellation of Voices’ (2019) was recently aquired as a permant gift to The Metropolitan Opera House in Lincoln Center for the Performing Arts.

Condo’s work has appeared in a number of solo exhibitions including ‘Confrontation’ in 2016 at the Staatliche Museen zu Berlin – Museum Berggruen in Berlin, Germany. In this exhibition work by Condo was presented alongside some of his major art historical reference points: masterpieces by Cézanne, Picasso, Matisse, Klee, and Giacometti. From 2011-2012 a mid-career survey of Condo’s portraiture entitled ‘Mental States’ travelled from the New Museum, New York to the Museum Boijmans Van Beuningen, Rotterdam, Netherlands, Hayward Gallery, London, United Kingdom, and Schirn Kunsthalle, Frankfurt, Germany.

In addition to this, Condo’s work has appeared in numerous biennials internationally, including the Venice Biennale in 2019 and 2013, the 13th Biennale de Lyon in 2015, the 10th Gwangju Biennale in 2014 and the 2010 and 1987 iterations of the Whitney Biennial among others. Condo’s work can be found in numerous renowned public collections internationally: Centre Georges Pompidou, Paris, France; Tate Modern, London, United Kingdom; The Broad Collection, Los Angeles CA; The Metropolitan Museum of Art, New York; The Museum of Modern Art, New York; The Solomon R. Guggenheim Museum, New York NY; and the Whitney Museum of American Art, New York among many others.