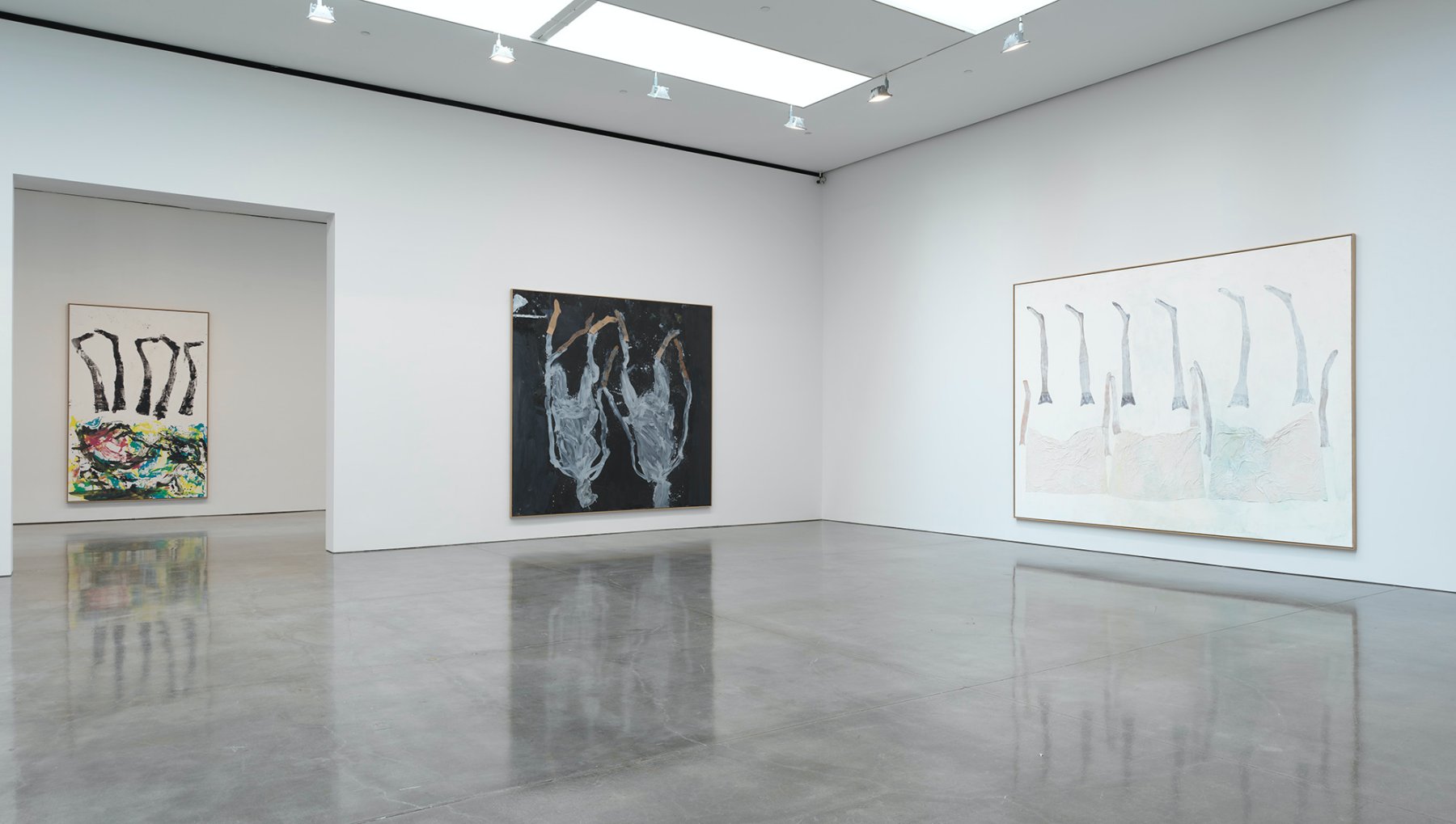 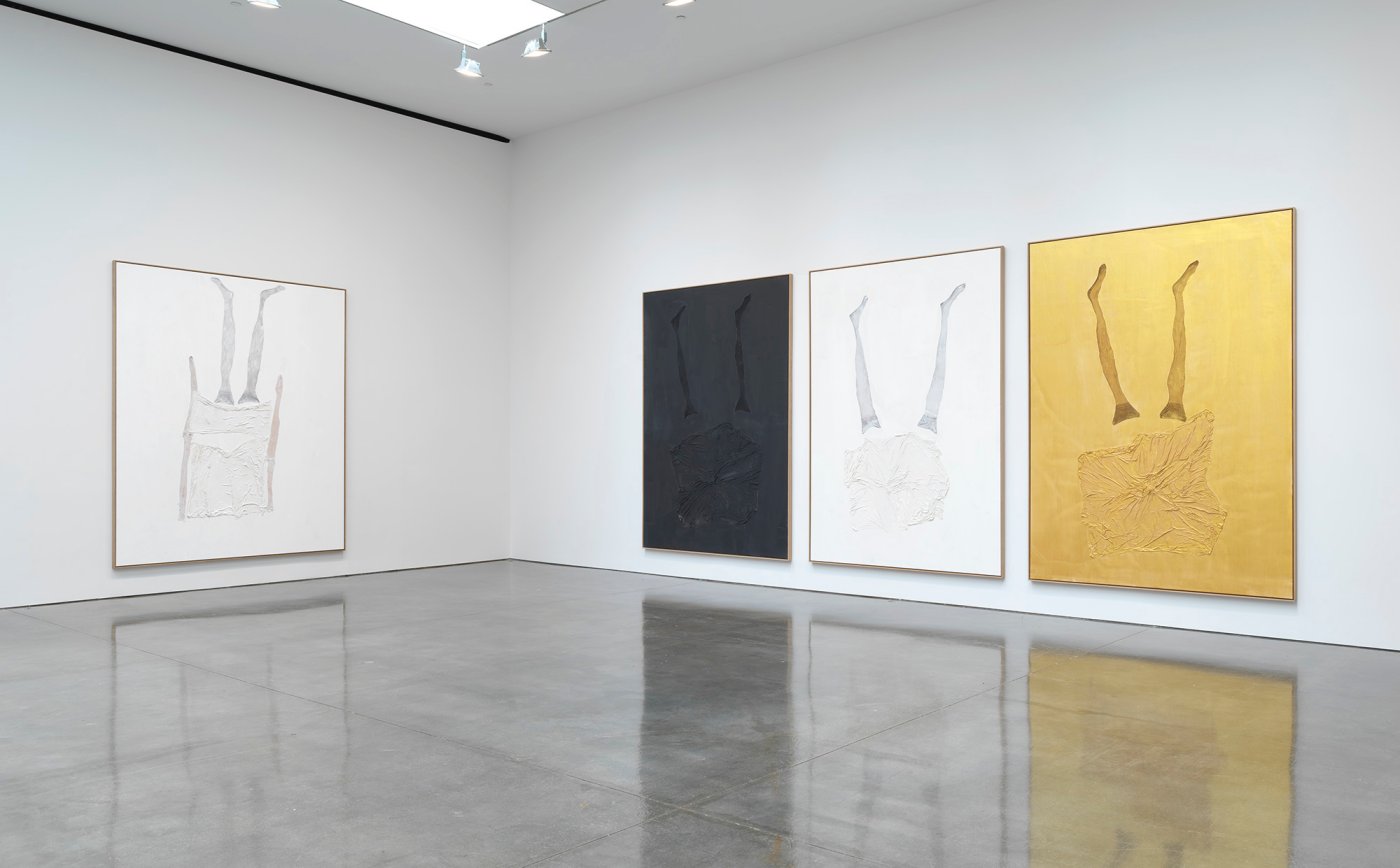 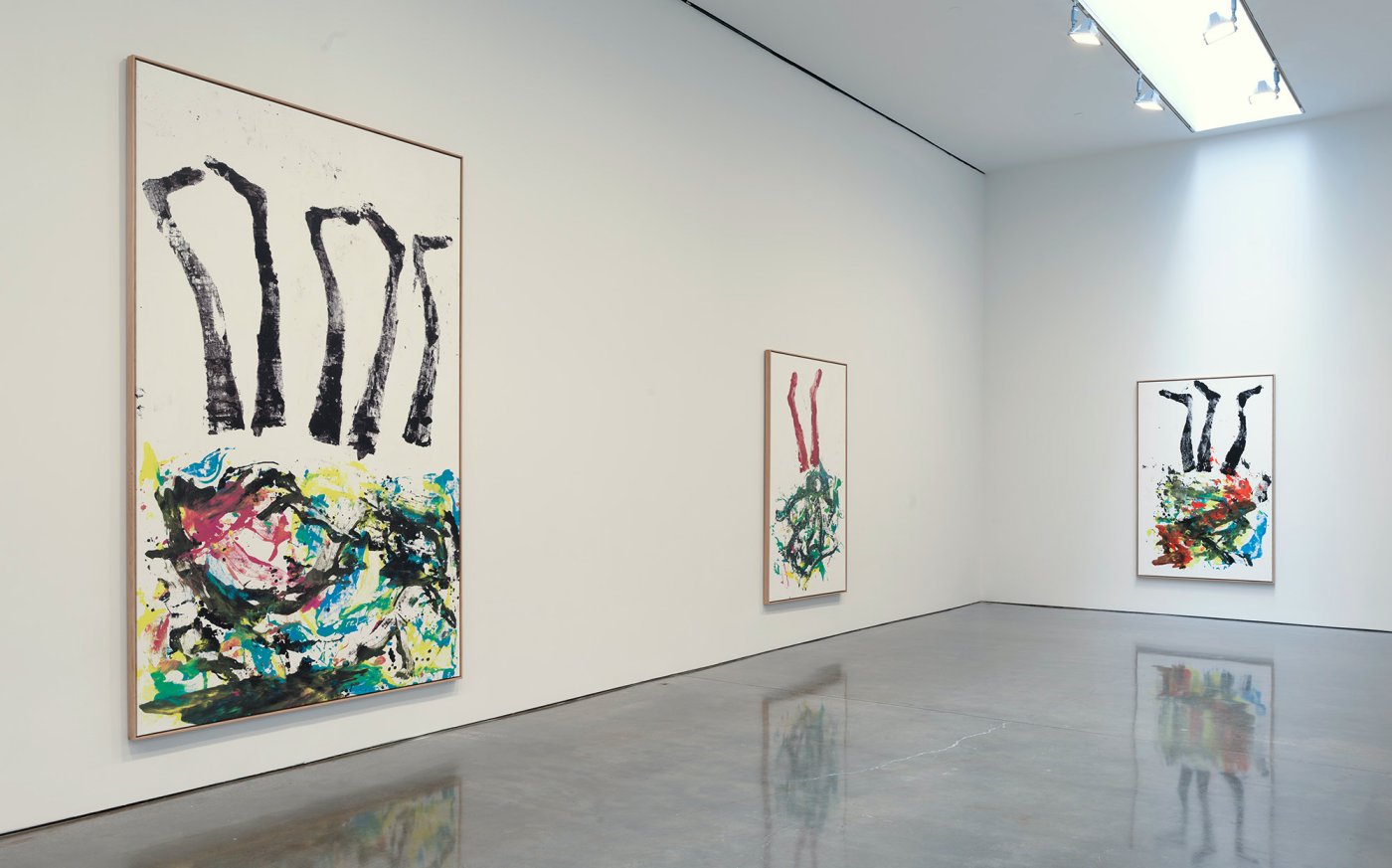 Throughout his long and distinguished career, Baselitz has combined a direct and provocative approach to making art with an openness to art historical lineages, counting among others Willem de Kooning and Philip Guston as his key influences. In 1969, he began composing the inverted images for which he has become best known to slow the processes of making, looking, and apprehending. During the past fifty years, he has augmented his visual language with a range of formal and historical allusions while consistently returning to the human figure. Often he reinterprets—cannibalizes—his own work.

Just as the exuberant provocations of Dada—as seen in the work of Hannah Höch, George Grosz, and others—emerged out of the catastrophes of the First World War, so does Baselitz’s title herald a spirited reawakening from the ravages and restrictions of the current pandemic. In this new series, he has, for the first time, introduced the idea of collage by gluing pairs of nylon stockings onto canvases and painting over and around their diaphanous forms in white, black, or gold. In some paintings, these stocking-figures remain distinct from their backgrounds, while in others the printed impressions of paint-soaked nylons replace the hosiery themselves, their stretched forms snaking from multihued “skirts” of expressive splatters, like plants from undergrowth. Here, the stockings retain their associations with the human body while also evoking both botanical and abstract forms.

Art historian Eric Darragon, in his commentary on the exhibition, cites numerous indicators of stockings’ extensive history in cinema as well as in art, tracing their appearances in such classic films as Francois Truffaut’s La Peau douce (The Soft Skin) (1964) and Mike Nichols’s coming-of-age narrative, The Graduate (1967); or Degas’s images of dancers and Egon Schiele’s confrontational nudes. As a kind of collegial memory, Baselitz has titled several of the paintings in reference to women artists, including Helen Frankenthaler, Sarah Lucas, and Kiki Smith.

Springtime attests to Baselitz’s seemingly infinite capacity for artistic renewal, innovation, and tongue-in-cheek irreverence while continuing to harness the resilience of his distinctive methods and motifs. The appearance of the stockings, literally preserved in paintings such as Start ins Unbekannte (Off into the Unknown) (2020) and Freier Flug (Free Flight) (2020) serves to underscore the fleeting and enduring qualities that coexist there, drawing together an unexpected network of connections among images from the twentieth and twenty-first centuries.

An illustrated catalogue with a text by Eric Darragon will accompany the exhibition.

Springtime overlaps with the exhibition Archinto at the Museo di Palazzo Grimani, Venice, and anticipates Baselitz’s retrospective at the Centre Pompidou, Paris, which will open on October 20.