In 2018, as Georg Baselitz celebrates his 80th birthday, Galerie Thaddaeus Ropac London presents the first exhibition to focus solely on his work from the 1980s – the decade that saw the artist propelled to international fame, garner widespread critical acclaim and, at times, scandalise the art world. 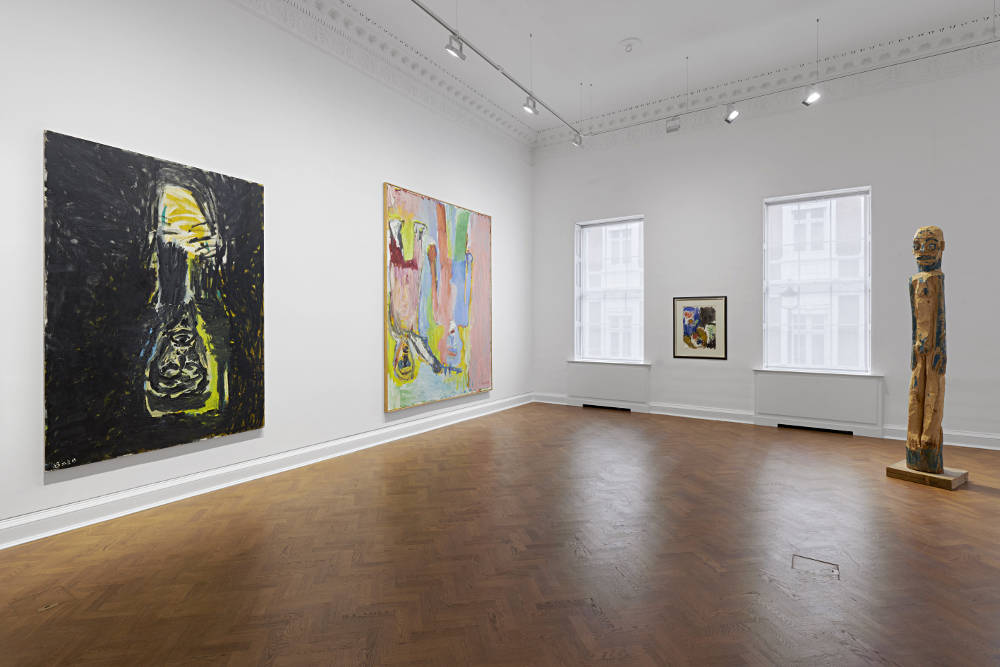 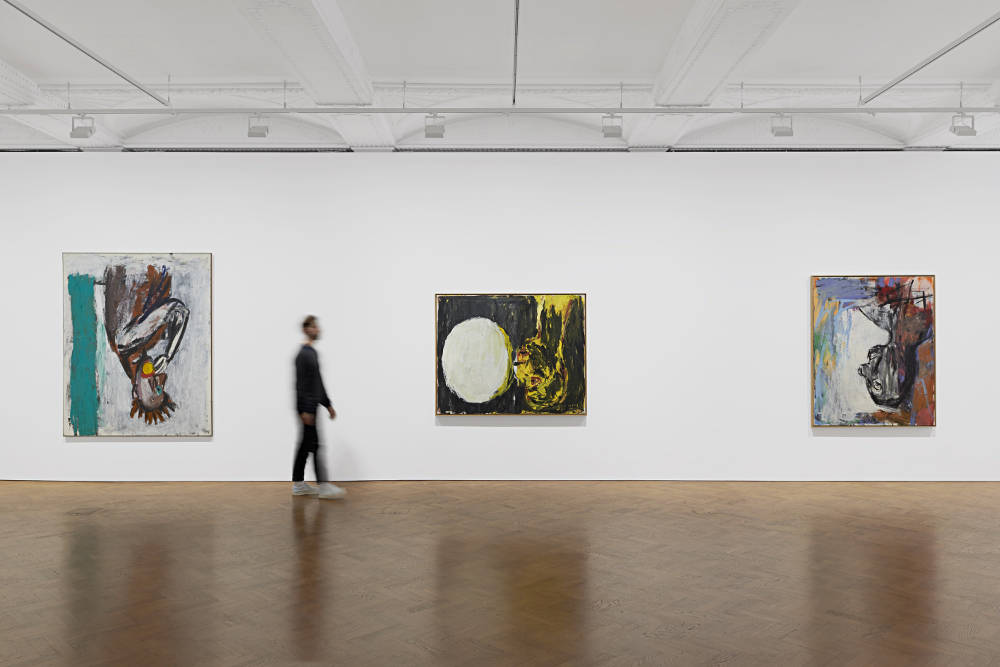 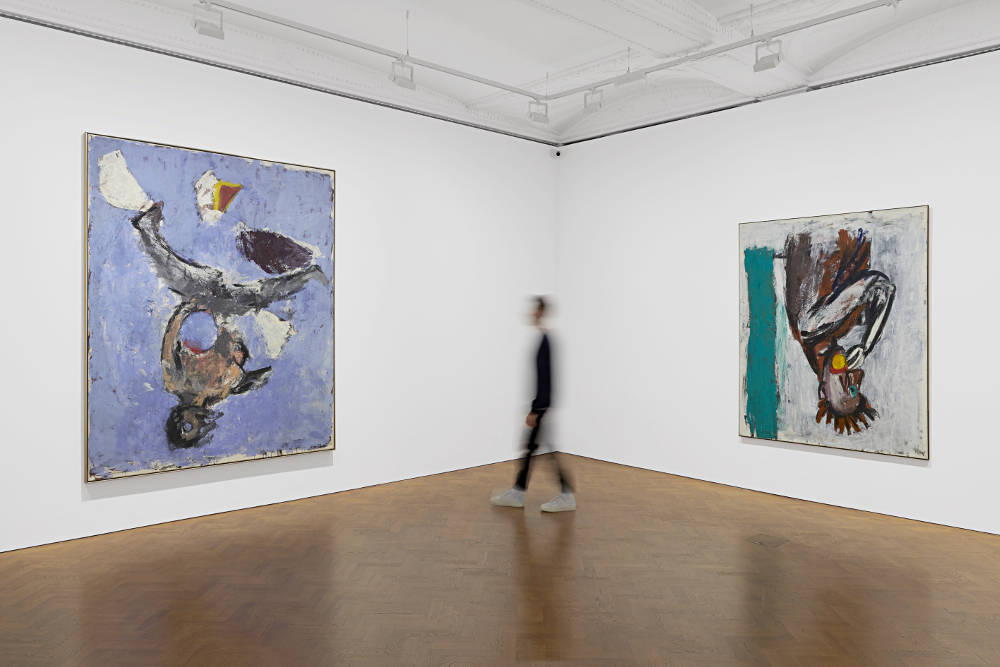 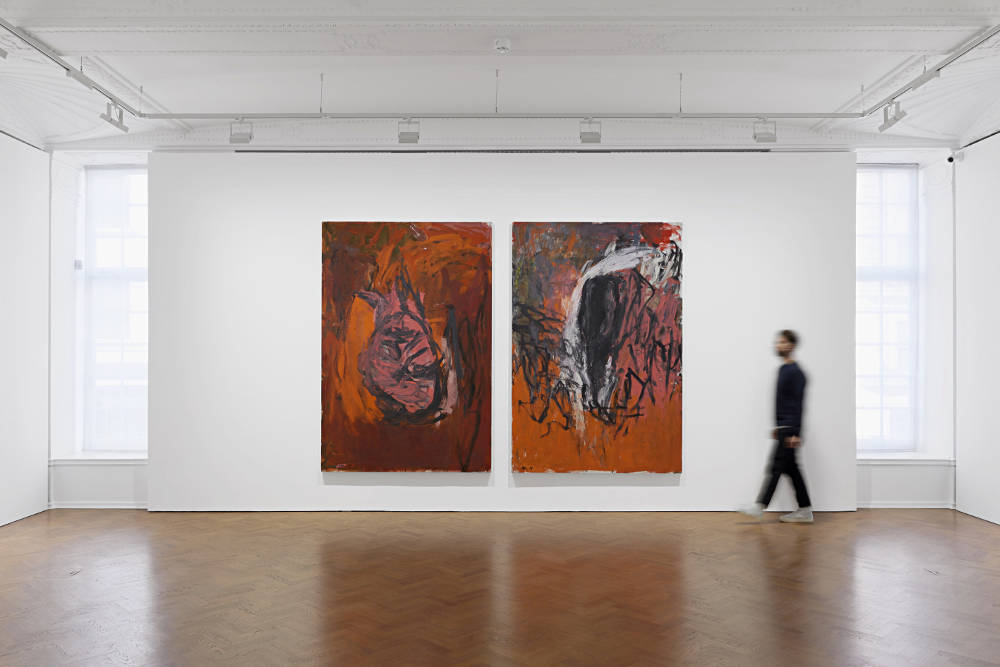 Through paintings, sculptures and works on paper, Georg Baselitz: A Focus on the 1980s traces the artist’s shift towards a freer, more expressionist application of paint and use of colour, resulting in works of astonishing vigour and formal power.

The exhibition presents seminal works from each of the series Baselitz developed during this decade – his Strandbilder [Beach Pictures], Orangenesser [Orange Eaters] and Trinker [Drinkers] – including works that have toured internationally but are yet to be exhibited in the UK, and those that will be shown for the first time since created in the 1980s. The survey of this pivotal decade provides a focus on both the breakthroughs of Baselitz’s painterly techniques and the sources from which his later series of works stem. His works on paper included in the exhibition – portrait heads that evoke religious icons, drawings for the Strandbilder [Beach Pictures] and untitled figure sketches – represent a parallel strand to his paintings, demonstrating the development of his personal iconography across media. In contrast to his painting technique of layering wet pigments on the canvas, the decisive graphic lines and strong contours of Baselitz’s drawings share a close affinity with his sculptures. Both show direct traces of the artist’s hand, whether as strokes of graphite and ink on paper or the marks of chisel, axe and chainsaw used to carve his sculptures from a single block of wood. The sculptural works in the exhibition include some of Baselitz’s earliest wood carvings, such as a totemic standing form that prefigures his more recent self-portraits.

Georg Baselitz, born in Saxony, 1938, has had a profound influence on international art since 1960 and is indisputably one of the most important artists of our time. “I was born into a destroyed order, a destroyed landscape, a destroyed people, a destroyed society”, says Baselitz, whose work, marked by a reaction to the human trauma and tragedy of the Second World War, shaped a new identity for German art in the second half of the 20th century. Over six decades, Baselitz has continually pushed the boundaries of painting and sculpture, particularly in the radical upside-down format that has come to define his practice.

Baselitz’s directly tactile method of painting with his fingers in the 1970s encouraged a freer use of colour and material that would come to the fore in his expressionist colour fields of the 1980s. The earliest work in Galerie Thaddaeus Ropac’s exhibition is from 1978; the diptych Rote Elke – Die Flasche (11 Gruppe) [Red Elke – The Bottle (11th Group)] introduces the dual strands of portraiture and still-life that would occupy Baselitz throughout that decade. His wife Elke has been a recurrent subject since his first painting of her in 1969. In these works, which are not portraits in the traditional sense, Elke’s features – and those of Baselitz’s father in Mein Vater blickt aus dem Fenster II [My Father Looks out of the Window II], 1981 – are schematically represented in expressive orange or pinkish hues, negating the usual function of portraiture as recording a likeness. The compositional strategy of depicting a bust in profile, looking out into an implied space beyond the canvas, was one Baselitz employed across a series of drawings and paintings, including Blick aus dem Fenster [View from the Window], 1982.

Baselitz has been painting his compositions upside down since the 1960s, a technique that continues to provoke today as much as when first introduced. For Baselitz, the novel upside-down format was a way to empty form of its content, navigating between the two poles of abstraction and figuration, and revolutionising a medium that was then regarded as irredeemably conventional. His painting Maria in Knogge – Strandbild 5 [Maria in Knogge – Beach Picture 5], 1980, exemplifies his works that depict a seated or reclining nude figure as a coarsely-defined silhouette against an ambiguous background of turbulent brushstrokes. The work is among the significant works in the exhibition relating to Baselitz’s Strandbilder [Beach Pictures] series, executed between 1980-81. A suite of 38 chalk-and-ink drawings on the same theme will also feature, the artist’s vigorous and dynamic lines bearing witness to his experimentation with different figural positions and compositional strategies.

The 1980s marked a departure for Baselitz, opening with his selection to represent Germany at the 1980 Venice Biennale alongside Anselm Kiefer, which marked the artist’s first foray into sculpture. Roughly hewn using chainsaw, axe and chisel, Baselitz’s sculptures in this exhibition, such as the standing figure in Ohne Titel [Untitled], 1983 and Kopf [Head], 1978/1984, have their origins in folk art and African carvings. Although the artist has described his sculptures as “more primitive, more brutal” than the paintings, they are nonetheless linked by the expressive brushstrokes with which he daubs both canvas and wooden object.

Venice was something of a watershed moment for Baselitz. Following the biennale, Baselitz participated in a series of influential exhibitions across the globe, including A New Spirit in Painting in 1981 and German Art in the Twentieth Century in 1985 at the Royal Academy of Arts, London, Zeitgeist at the Martin-Gropius-Bau in Berlin, 1982, and Expressions: New Art from Germany in 1983, organised by The Saint Louis Art Museum, which toured the United States.

That same year, a major retrospective of his work was presented at the Whitechapel Art Gallery, London, later travelling to the Stedelijk Museum, Amsterdam, and the Kunsthalle Basel. Two key series from this period, the Orangenesser [Orange Eaters] and Trinker [Drinkers], were featured in Baselitz’s first gallery exhibition in the United States, at the Xavier Fourcade Gallery, New York in 1981. The prosaic subject matter – eating an orange, or drinking from a bottle – became a vehicle for vibrant colour relationships and hatched gestural brushwork that deliberately flaunts its own lack of elegance or apparent sophistication. In Orangenesser VI [Orange Eater VI], 1981 and Orangenesser (VIII) [Orange Eater (VIII)], 1980-81 the intense blue background and shirt create startling contrasts with the complementary orange at the centre of each composition. In Trinker + Flasche [Drinker + Bottle], 1981, the taut equilibrium between yellow-faced figure and the blue hues of the bottle and background achieves a balanced asymmetry.

A further significant development in the 1980s was the appearance of religious iconography in Baselitz’s work, evident in paintings like Die Dornenkrönung [The Crowning with Thorns], 1983, and Der Bote [The Messenger], 1984, as well as his Nachtessen in Dresden [Supper in Dresden] and Ikone [Icon] drawings from the same period. These form part of a sequence of works created between 1983-84 that allude to Biblical narratives, such as the Last Supper and the Passion of Christ. The drawing Nachtessen in Dresden, 1983 corresponds to a large-scale painting on the same theme, now in the Kunsthaus Zürich, paying homage to his artistic predecessors in the form of the revolutionary German Expressionist collective The Brücke, whose members take the place of Christ’s disciples around the table.