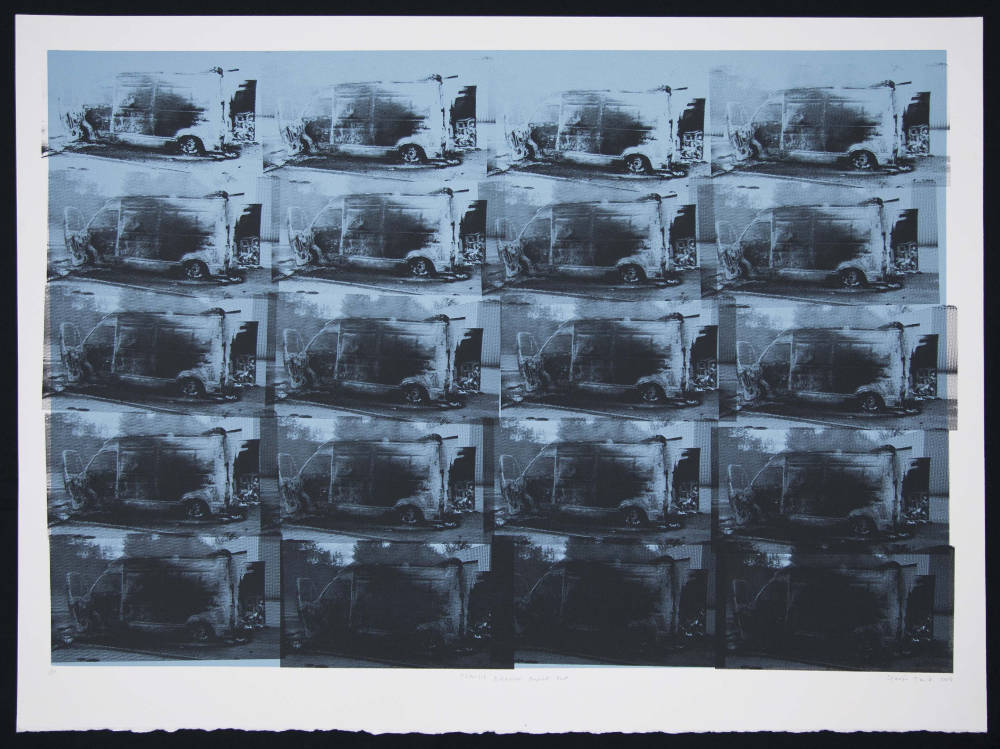 Turk’s work traditionally fuses elements of cultural identity with ways of seeing – or not seeing; surprising the viewer with what they think they know and what they presume they have seen. ‘White Van Man’ engages with these familiar tropes whilst playing with icons of modern art history and contemporary culture in a powerful series of images that presages current and future world events.

We live in dangerous times, from Brexit to the rise of the far-right; the unravelling of generations of political and cultural cooperation and the deliberate decimation of our natural world. Where political terminology includes the infamous threat of ‘crashing out’ of the EU and the tragedy of the greatest number of transitory ‘migrants’- victims of war and failing economies – in modern history. The nightmarish crashed white transit van is a fitting metaphor for them all.

Presenting initially as ‘abstracts’ rendered in a restrained palette of secondary colours, the works in the portfolio are revealed as a series of repeated photographic images of crashed white transit vans – a recurring theme for Turk since 2010. White Van Man has become part of contemporary folklore: a white male in a battered Ford Transit who delivers goods and services in a post high street Britain where global logistics have become intertwined with his paranoid fear of being taken advantage of by bureaucrats and by migrating foreigners.

Originally manufactured on the first factory production line by Ford in the USA, the Transit van, with its signature style logo badge, is a mass-produced branded product adopted by the UK as its own. Offering a host of cultural references for the viewer, a link can be made with Warhol’s ‘factory’, the studio scene that pumped out authentic reproductions of celebrity and consumer culture. Warhol’s art, created using yesterday’s news and popular culture, has now become the industry standard for ‘safe’ modern art investments.

This portfolio of images also reminds us of Grand Theft Auto; the violent but pioneering computer game of British design. GTA pays homage to an American Dream gone very wrong – cars once seen as a symbol of freedom and democracy digitally transformed into the destructive rebel’s weapon of choice.

The phenomenon of consumer culture gone mad is a theme playfully referenced in Turk’s oeuvre, from the signature painted bronze bin bag sculptures and cardboard boxes to these repeated images of a Transit van, deconstructed and crushed.

From crash to burn out, the demise of a once proud working class is encapsulated in the violent death of an anachronistic world played out in this ‘White Van Man’ series – a plaintive statement and memorial for a transforming Britain no longer confident of its own identity, delivered within the aesthetic of American Pop. It perhaps asks the question, “is the loss of our green and pleasant land an accidental act of self-harm?”

‘Transit Disasters’ is a collection of 10 silkscreen prints on Somerset paper, available as a limited edition of 30 (no.1 – 15 sold as portfolios and no.16 – 30 available as individual prints).