David Richard Gallery presents Slow Burn by artist Galen Cheney in her first solo exhibition with the gallery in New York. The presentation includes 14 paintings from 2014 through 2021 that fall basically into two categories based on the artist’s approach: painting on a stretched canvas versus painting in an unconfined way on unstretched supports that includes the addition of collaged canvas elements, fabrics and other materials that are then either stretched or hung unstretched as a tapestry. 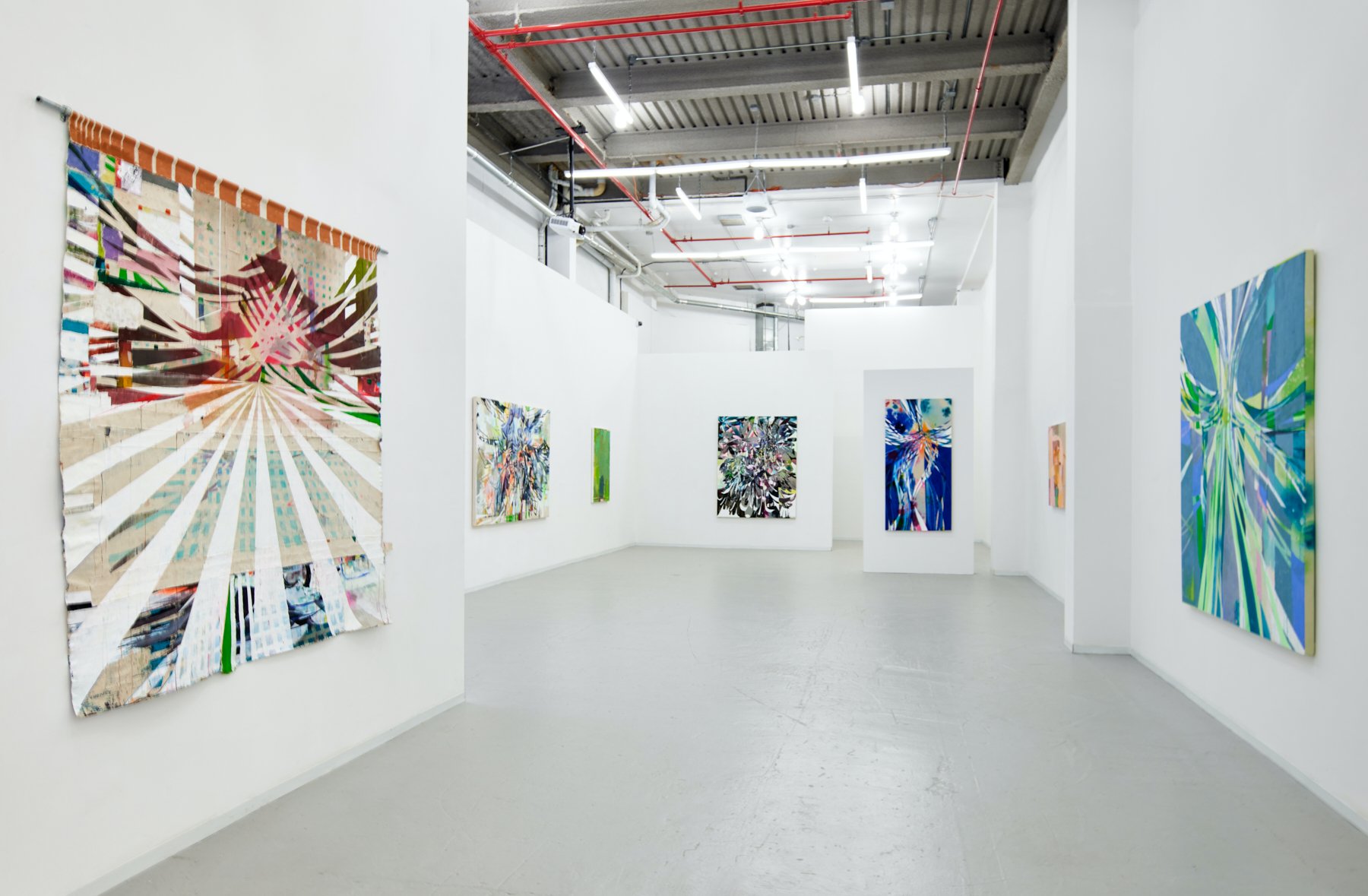 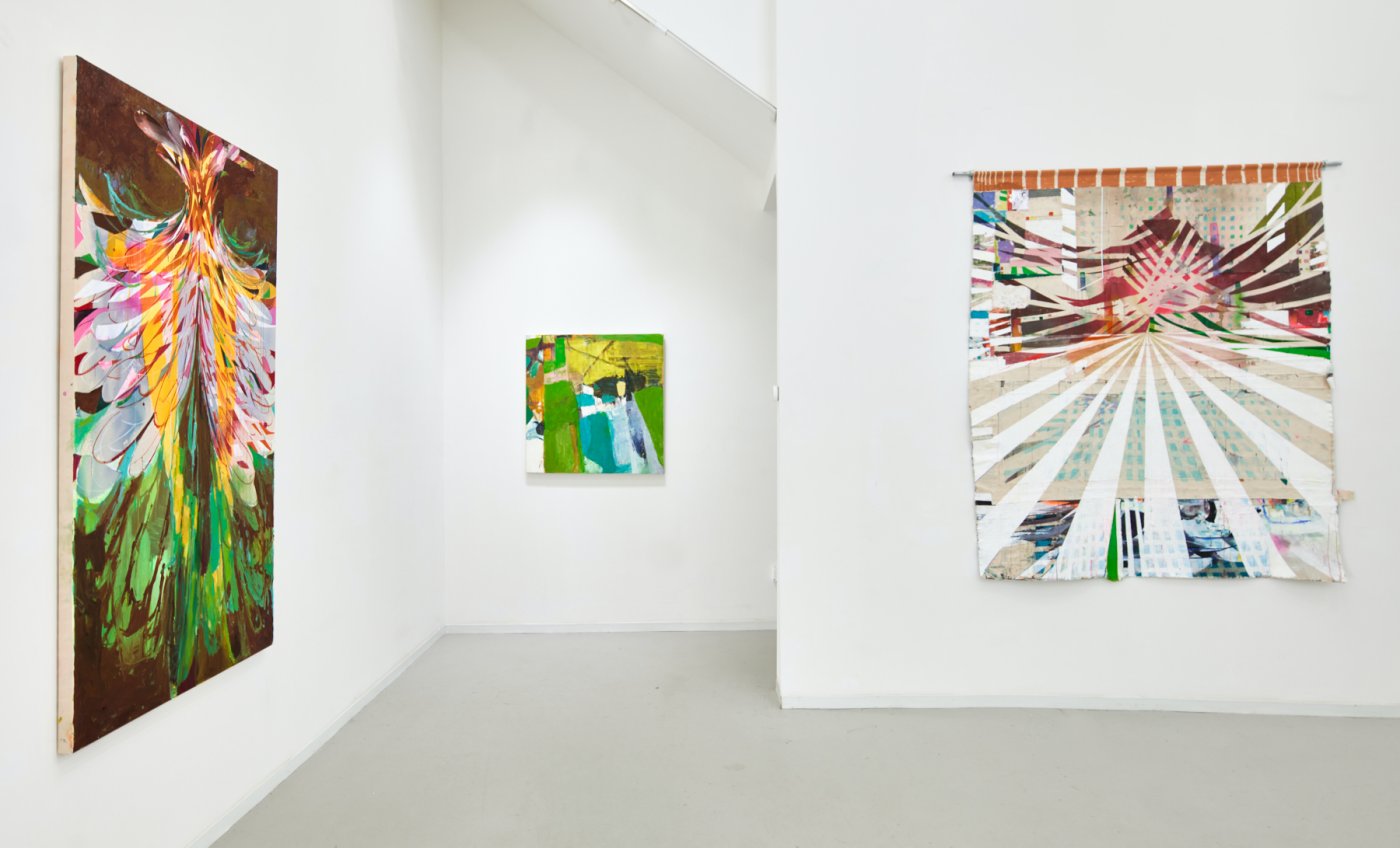 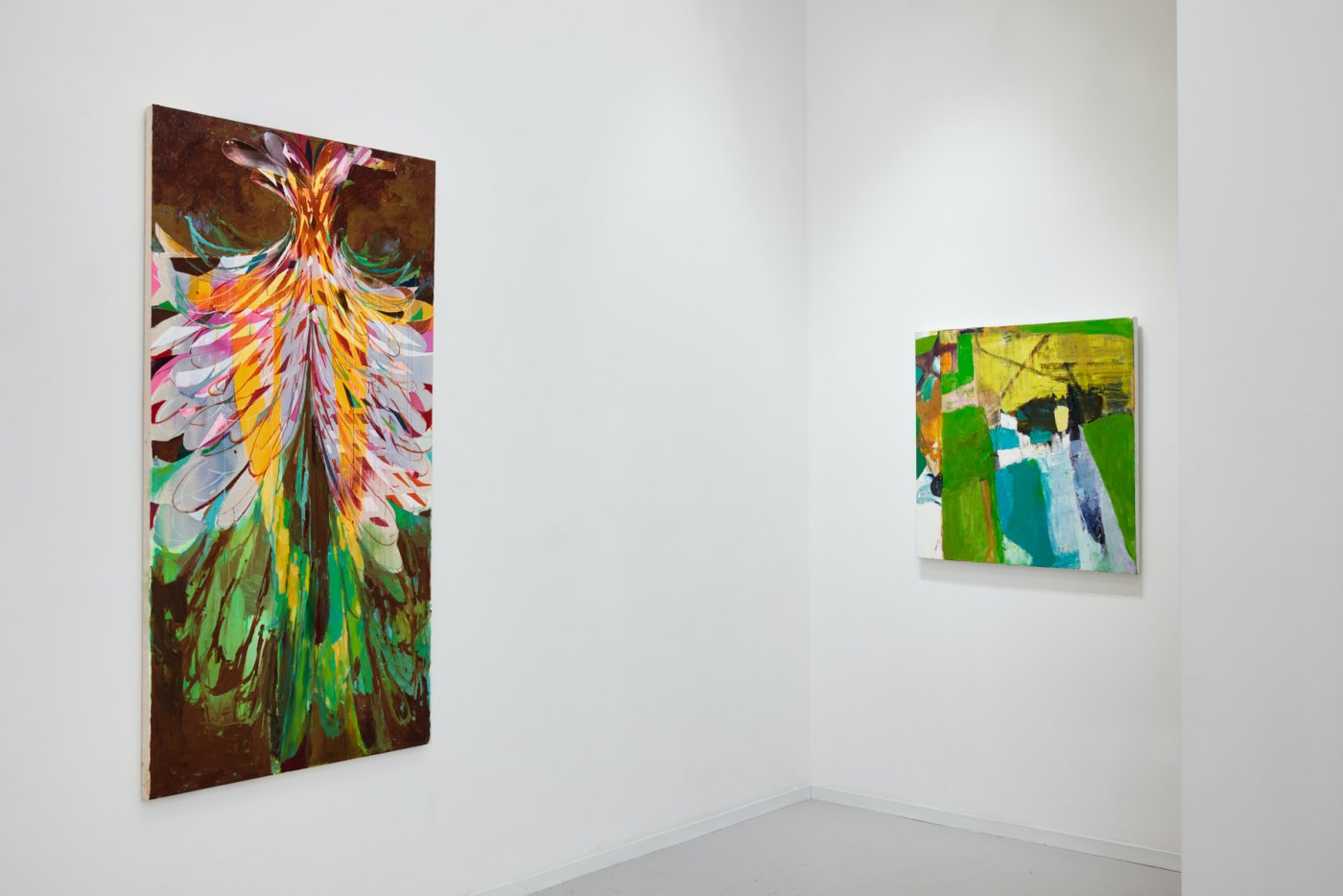 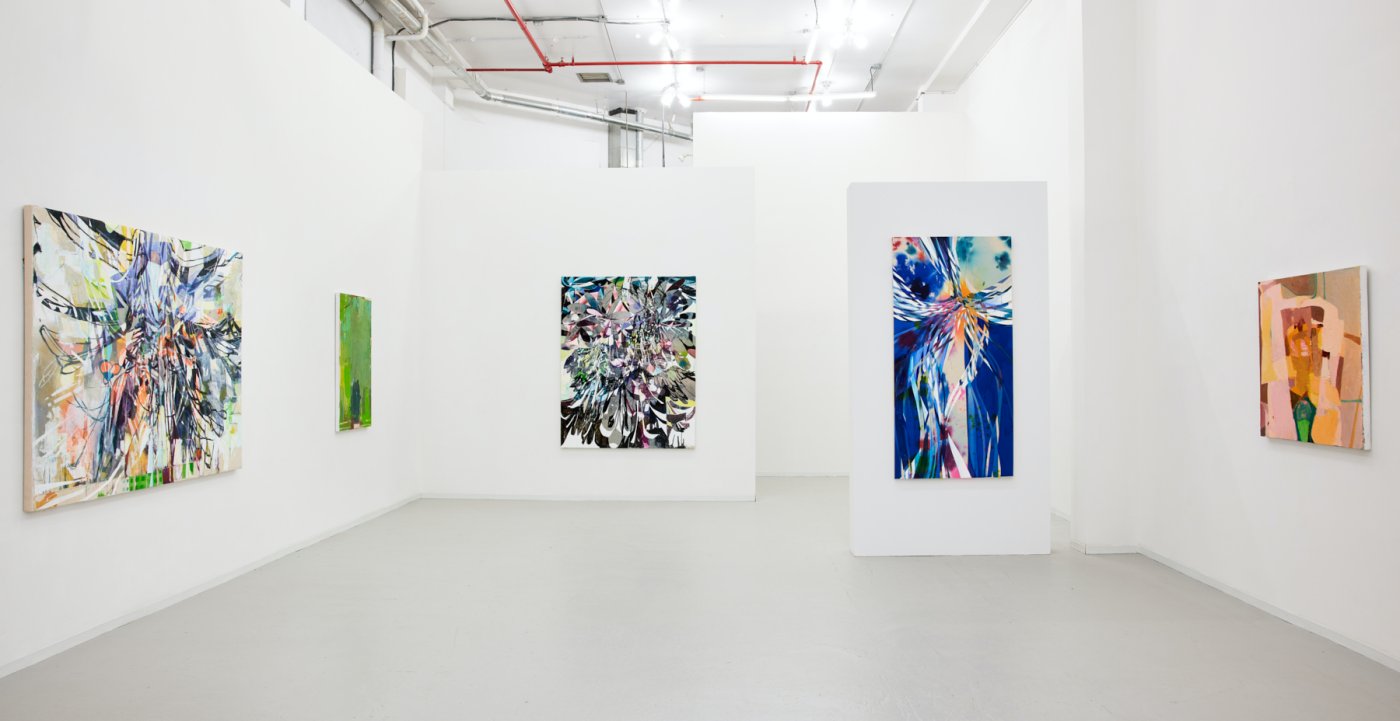 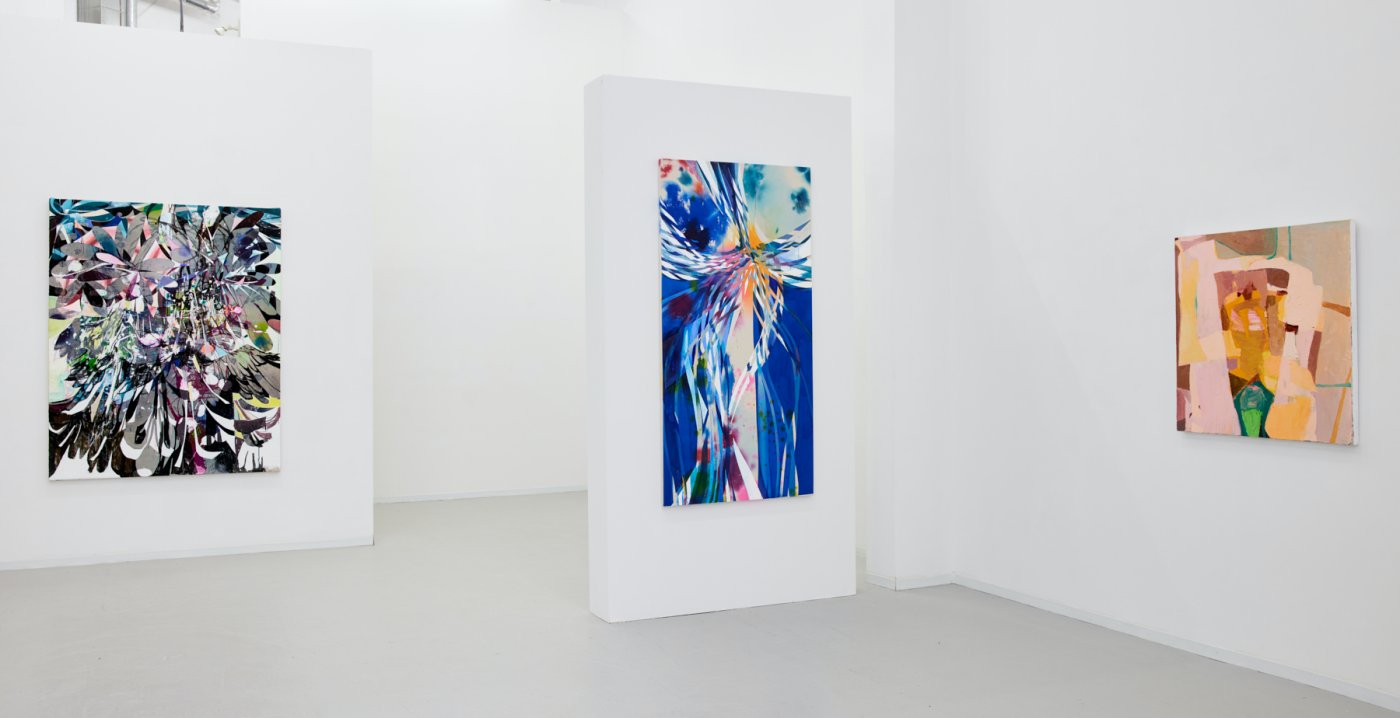 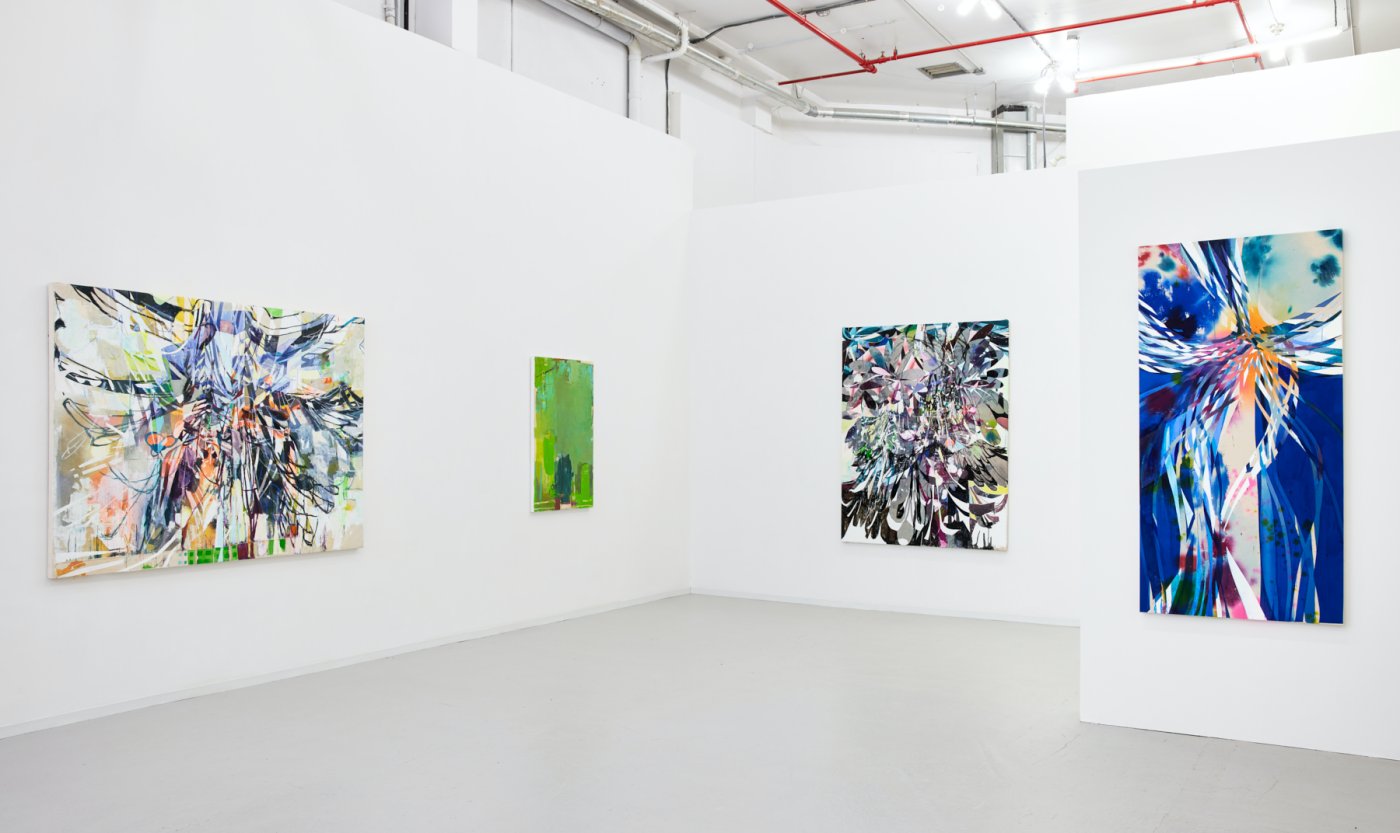 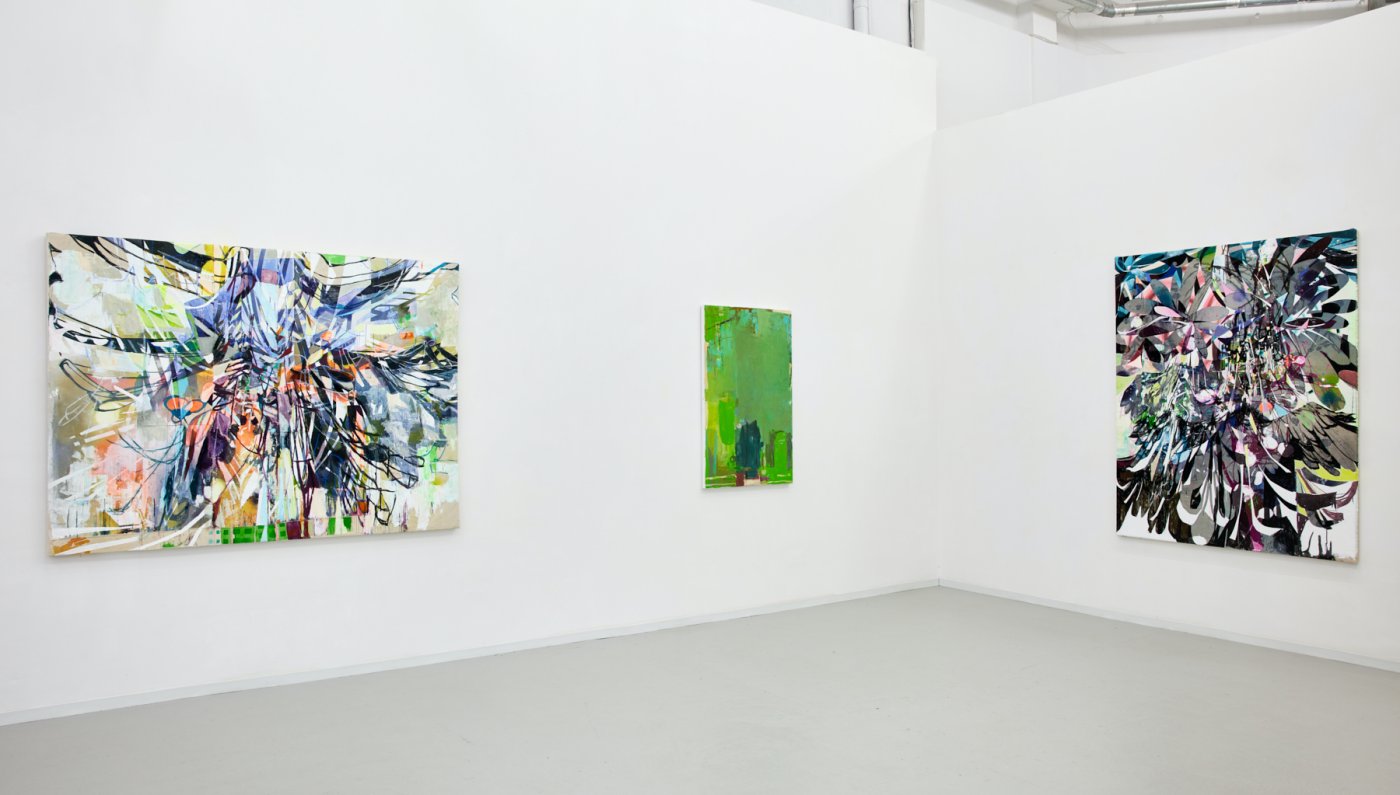 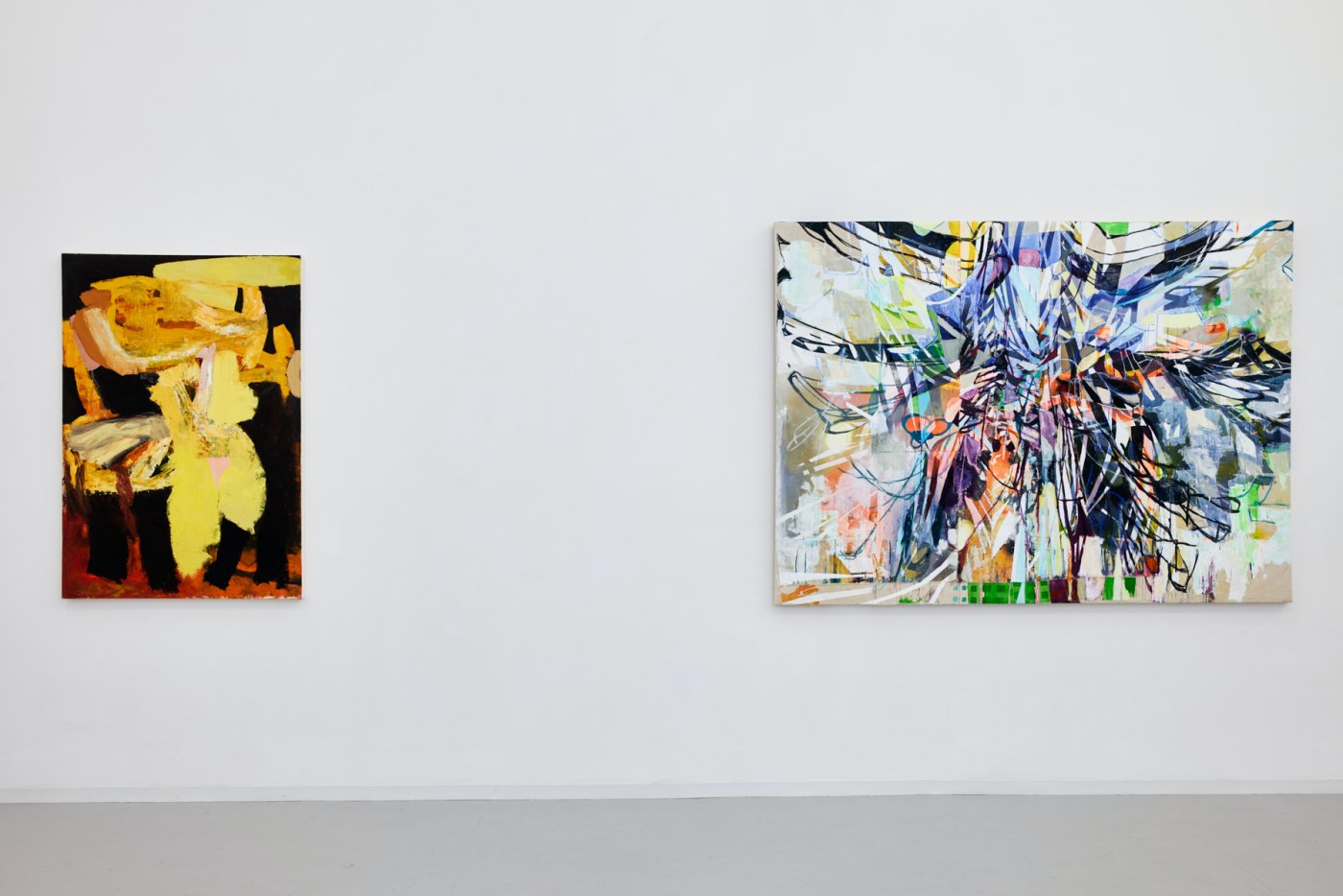 Not surprising, the imagery is also distinctly different between the two approaches. First, color, vivid color, is a key component with both approaches. Second, the compositions differ between the two methodologies in that the paintings emerging on the stretched supports are a mix of gestural strokes, textured and sometimes impasto passages with blocky and layered forms of color and a balanced composition across the canvases. However, in the recently developed unbounded method, the compositions seem to evolve, more spontaneous with notable use of lyrical and directional lines that radiate from within the compositions, running off the canvas or into other collaged elements and a greater use of defined shapes ranging from geometric to loops and long sweeping curves—all combined with her love of nonobjective gestural and color field approaches to painting.

The primary curatorial objective of the presentation is the contrast between not only Cheney’s two painting approaches, but the resulting differences in the compositions and imagery between the oil paintings initiated on stretched canvas and the larger collaged paintings initiated on unstretched canvas. However, the bigger question is why, what triggered the experimentation of both working larger and with collaged canvases not on supports?

Cheney’s oil paintings on stretched canvas were very much influenced by her studio training, knowledge of art history and passion for Abstract Expressionism. All of her paintings until recently were painted on a stretched support, more out of habit and convention. Her awareness of art history and the rules of the road pressured her internally to make “good” paintings and like most artists, she is her harshest critic and treated a stretched canvas as precious. Cheney’s compositions, color selections and process are all thoughtful and structured around the composition, line and palette on a fixed support—emphasis on “fixed”. As Cheney said, these stretched canvases are an “inside-out approach”. Meaning, the imagery and content come from within and move through her mind and body onto the canvas—lots of thinking and evaluating each action.

The genesis of the larger collage and “tapestry” canvases was a 2015 artist residency in China. Being detached form everything familiar, but surrounded by so many new materials, such as printed papers and inks and new influences, Cheney started cutting, gluing, collaging and inking her way to a new process and liberating experience. This was a profoundly different approach in that all of the materials were right in front of the artist, she did not have to produce anything. It was a matter of unshackling herself, throwing caution to the wind and having some fun just composing her paintings. Thus, according to the artist, it is more of an “outside-in approach” to painting—all of the materials were ready and waiting, it did not require generating the palettes and imagery, but rather, responding to and creating compositions from what was in front of her.

This new-found fun and process continued when Cheney returned to the US and applied the same process to all of the scraps, rejected canvases and newly painted canvases done purely for the benefit of becoming source material. She felt unconstrained and free to take risks and make mistakes, change her mind, edit and even flip the canvas over and start again. Her “inner critic is quieter.” Take a look at both sides of Emanator, 2020 as proof of a total artist conversion.

The exhibition title, Slow Burn, is a reflection of Cheney’s thoughts and feelings about painting—it is slow and all-consuming. First, engaging the mind, as ideas, issues and aesthetics float around and meld, forming the nuggets for new paintings. Then, as a true student of Abstract Expressionism, it becomes corpuscular, then bodily, the ideas and emotions pulse through the body and express themselves through the artist’s arms and fingertips, guided by her literal and metaphorical vision.

Cheney is a painter, through and through. She enjoys the solitude of both the thought and physical processes—it is not a group activity. Cheney also enjoys the intimacy and internal explorations of herself followed by the external expression of her ideas and frustrations. It is how she grounds herself. Thus, painting is personal and her method of expression.

However, drawing, which Cheney is deeply passionate about, is integral to her paintings. Interestingly, she describes her painting process as “scribbling around in the details and working my way out.” An indication that she gets details and initial concepts down on canvas first then expands, edits and scales up from there. The use of line is a common element in the artist’s paintings, both the oil paintings initiated on stretched canvases as well as the collaged paintings. In fact, the collage paintings contain a number of small sections of drawing of shapes with distinct detailed line work as well as large markings for structures—pentimenti and evidence of the artist’s thinking and planning process.

The artist is well trained in both studio practice and art history. While she is detail oriented, as noted with her love of drawing, she has a more intuitive studio practice, in her words, working from the “gut” and not overly dogmatic about theory. Yet, daily news, global issues, the environment and a sense of urgency with every aspect of life calls to her and informs her work—and to some extent, hales from her training and influences as noted below.

Cheney earned her MFA at the Maryland Institute, College of Art where she was mentored by Grace Hartigan. Hartigan tried to make sense of a confusing world through her artworks and doing so by imbuing them with meaning and feeling. Her artworks often included recognizable forms as she moved between and combined figuration and abstraction using her iconic brushwork and bold gestural approach. Clearly, Hartigan had an influence on Cheney as she developed an appreciation for and respect of Abstract Expression as well as passion for the brush stroke and power of strong gestures in painting.

However, Cheney had several other informal mentors who made strong and lasting impressions on her and artwork. Layering of color and forms, density of imagery and mixing hard edge shapes with painterly approaches as well as collaging geometric shapes in mosaics by Jack Whitten influenced Cheney to be as equally “fearless” in approaching her art. Cheney’s newest collage works with their concentrated shapes and imagery, use of diverse materials and constructed approach speak to the assemblages of Thornton Dial, another “fearless” artist who influenced Cheney to think big and consider the unexpected in painting. Not forgetting Joan Mitchell, the extraordinary Abstract Expressionist artist whose brush strokes evoke lines and drawing, lyrical movements, color harmonies and the natural world all in one motion has been one of the greatest inspirations for Cheney—as Cheney is a thoughtful student of art history and passionate about Abstract Expressionism and the great painters who came before her.

Cheney gets into and enjoys the process, details and nuance of every mark and action on the canvas. She has stated that she is “a wall climber rather than a hang glider, reaching for handholds, footholds, always on the brink of falling, not seeing the totality of the picture until the climb is done.” So, just as she has relished every moment of her new-found freedom and expression on the larger and unstretched canvases, she grounds herself in and will always creates her oil paintings on defined stretched canvases (or, at least for new…..stay tuned).

I’m a painter’s painter. My formal art education began at Mount Holyoke College and continued at the Maryland Institute, College of Art, where I received my MFA and was mentored by Grace Hartigan, Hermine Ford, and Salvatore Scarpitta, among other important artists.

Three decades later, I continue to push myself and my work with honesty, commitment, and fearlessness. Deep diving into my own creative process, I am a physical artist whose richly layered paintings embody my curiosity about and exploration of materials abstraction and my own psyche.

Born in Los Angeles and widely traveled, I have spent most of my life in New England where I feel a deep connection to my roots, the land, and centuries-old architecture. A childhood trip to Europe was the start of my enduring love of travel and fascination with ancient civilizations. Along with an affinity for the ancient world, I feel the gravitational pull of contemporary urban life–its grit, noise and neon graffiti and an unshakable connection to the mid-century Abstract Expressionists. In my own way I synthesize these influences to create work that is complex, and uniquely mine.

My work has been exhibited and collected widely in the U.S. and in Europe, China, Canada, and the UK. I was featured in New American Paintings (vol. 86) and was nominated for a Joan Mitchell Foundation Grant. Past residencies and fellowships include the Millay Colony, MASS MoCA, Vermont Studio Center, Saint-Gaudens National Historic Site, and Da Wang Culture Highland.