Parafin presents an exhibition by Fred Sorrell, his second at the gallery. Alongside new paintings and works on paper the exhibition includes Sorrell’s first large-scale wall painting. 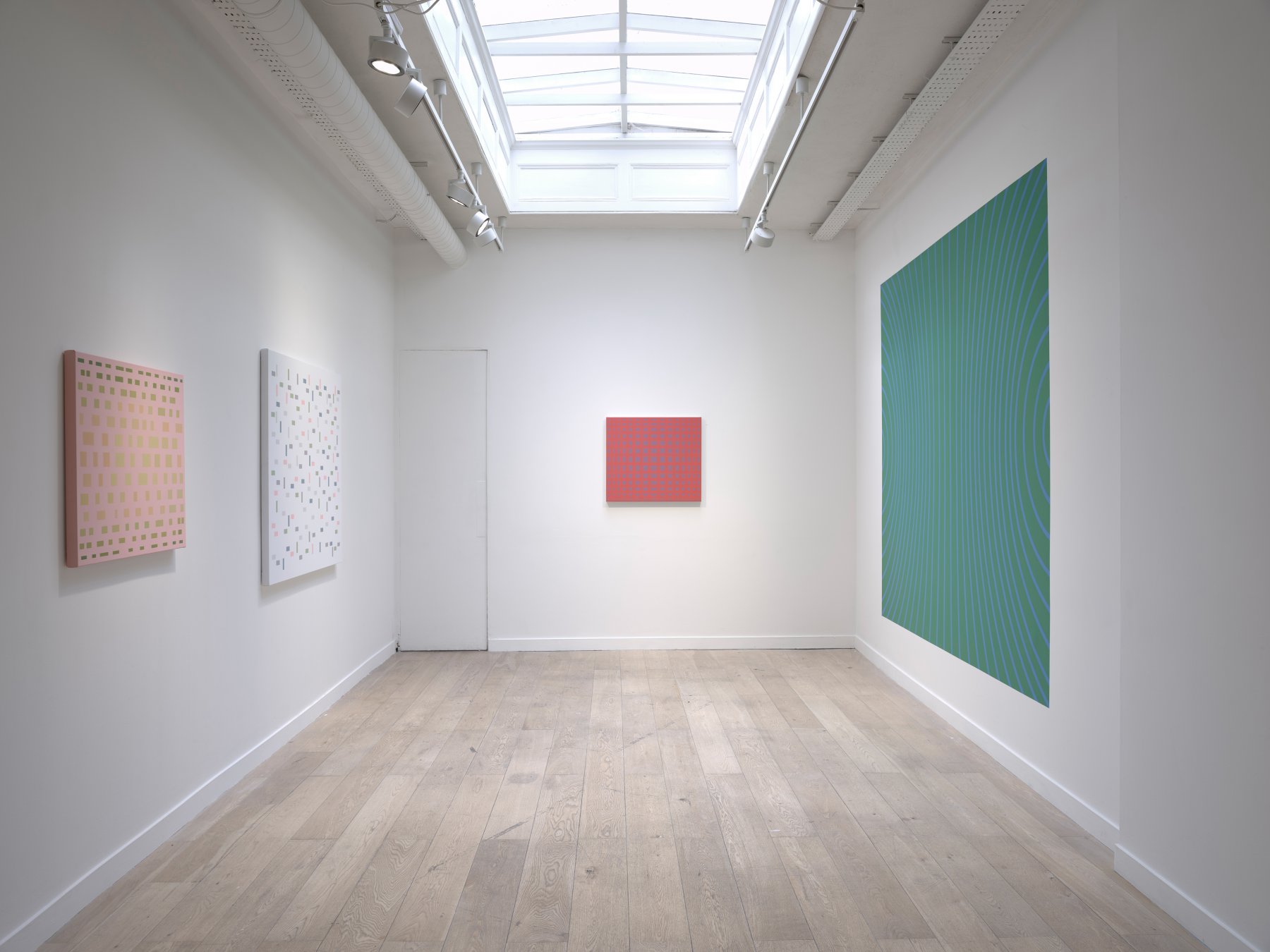 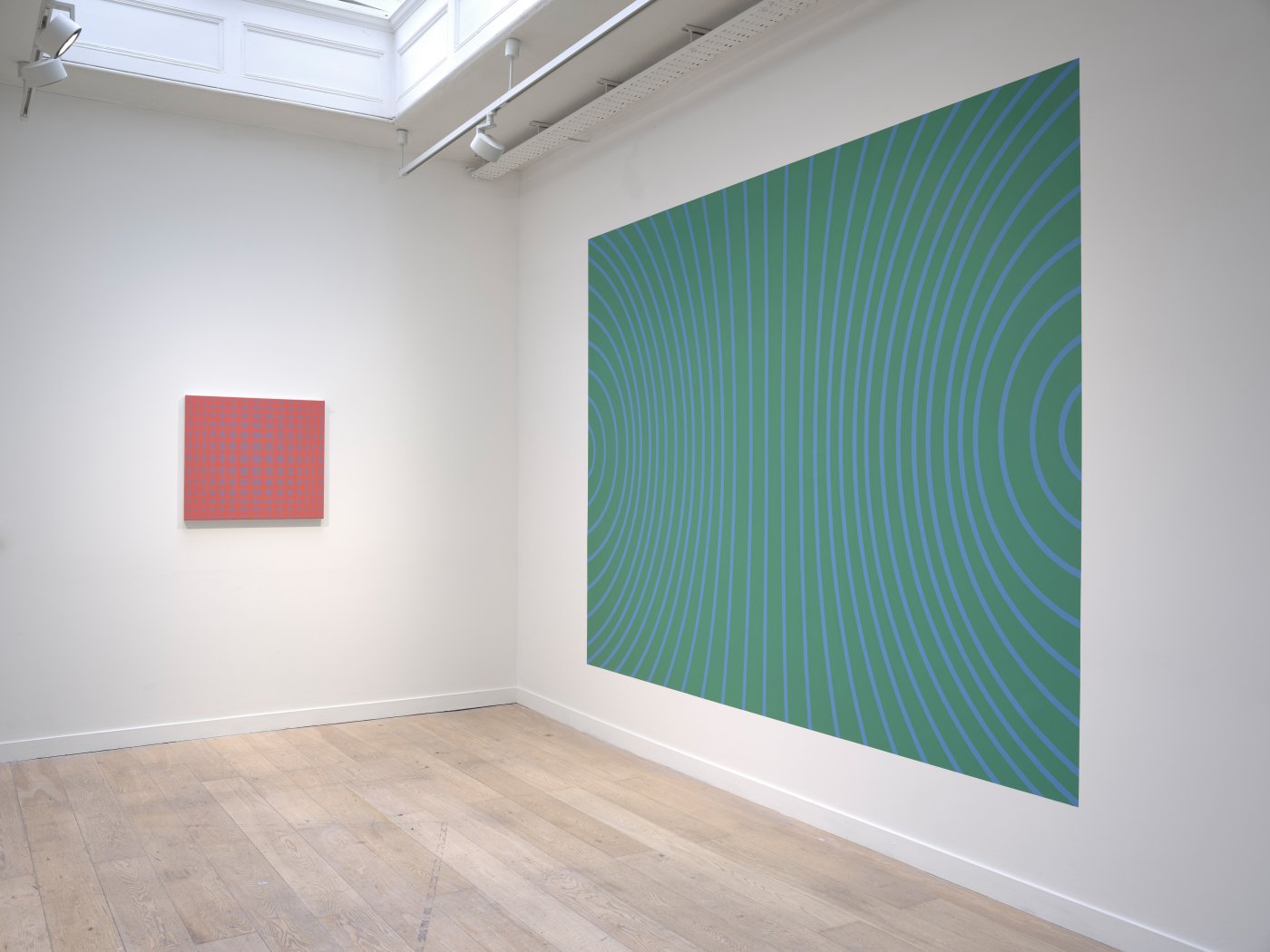 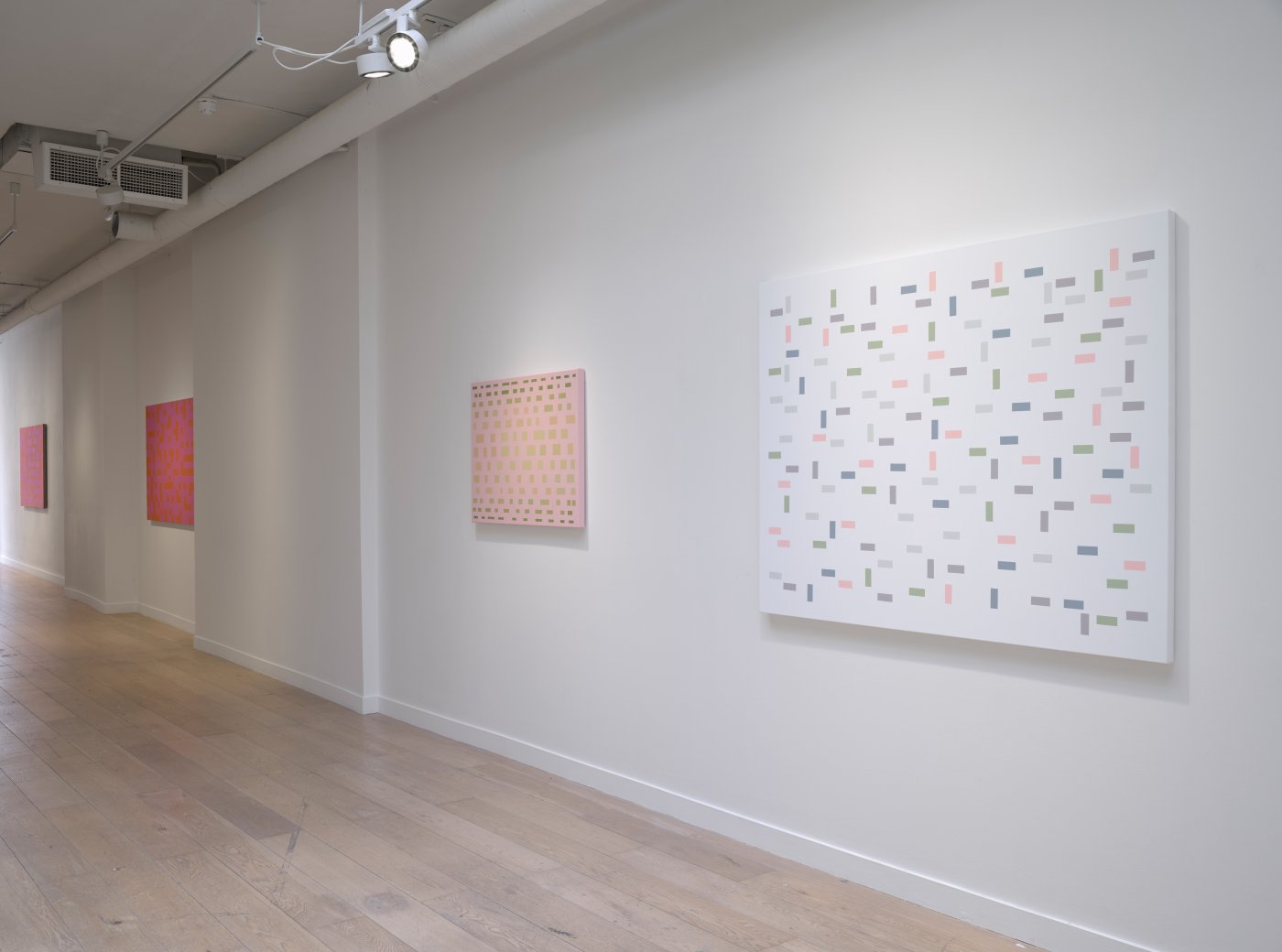 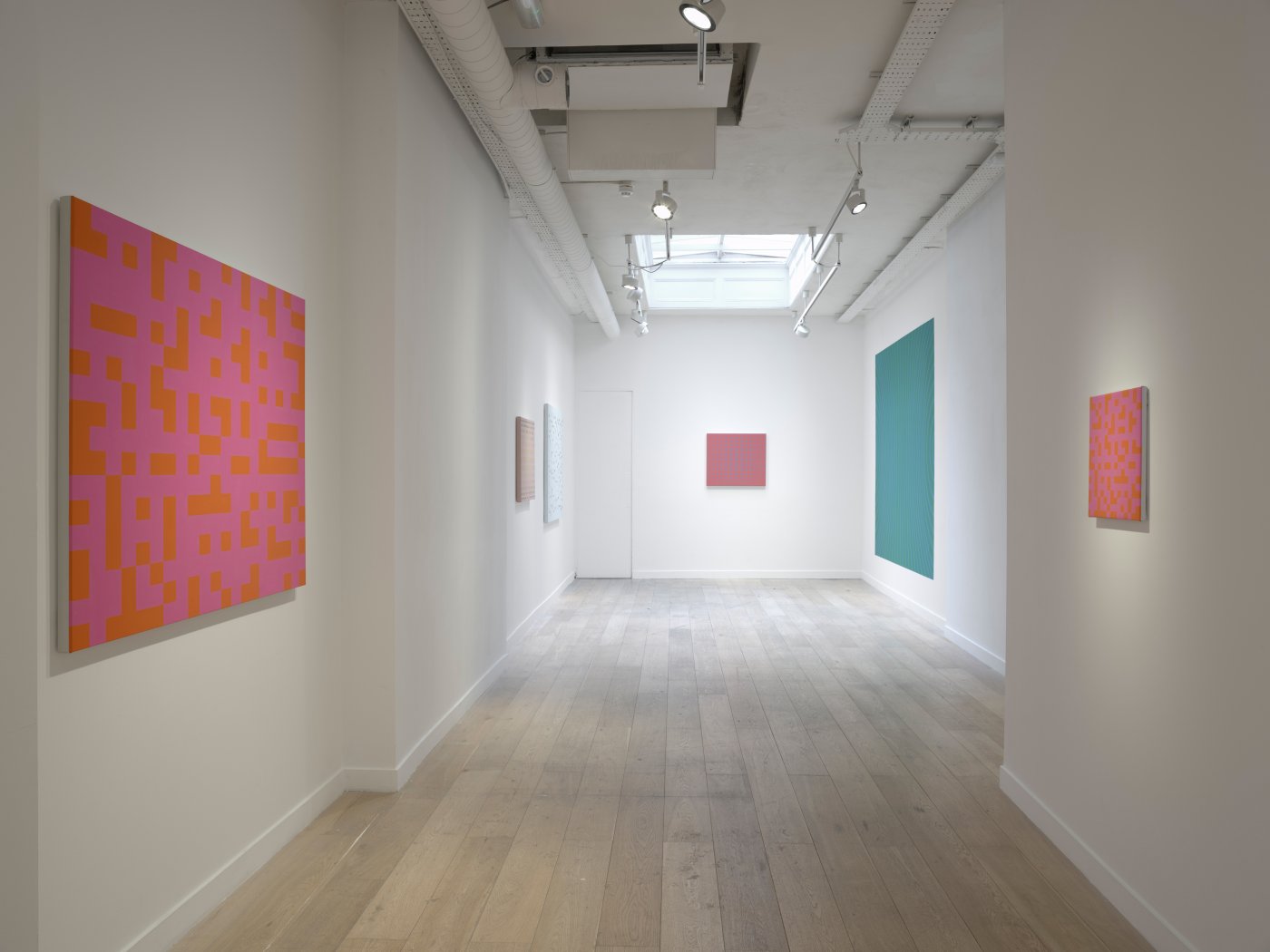 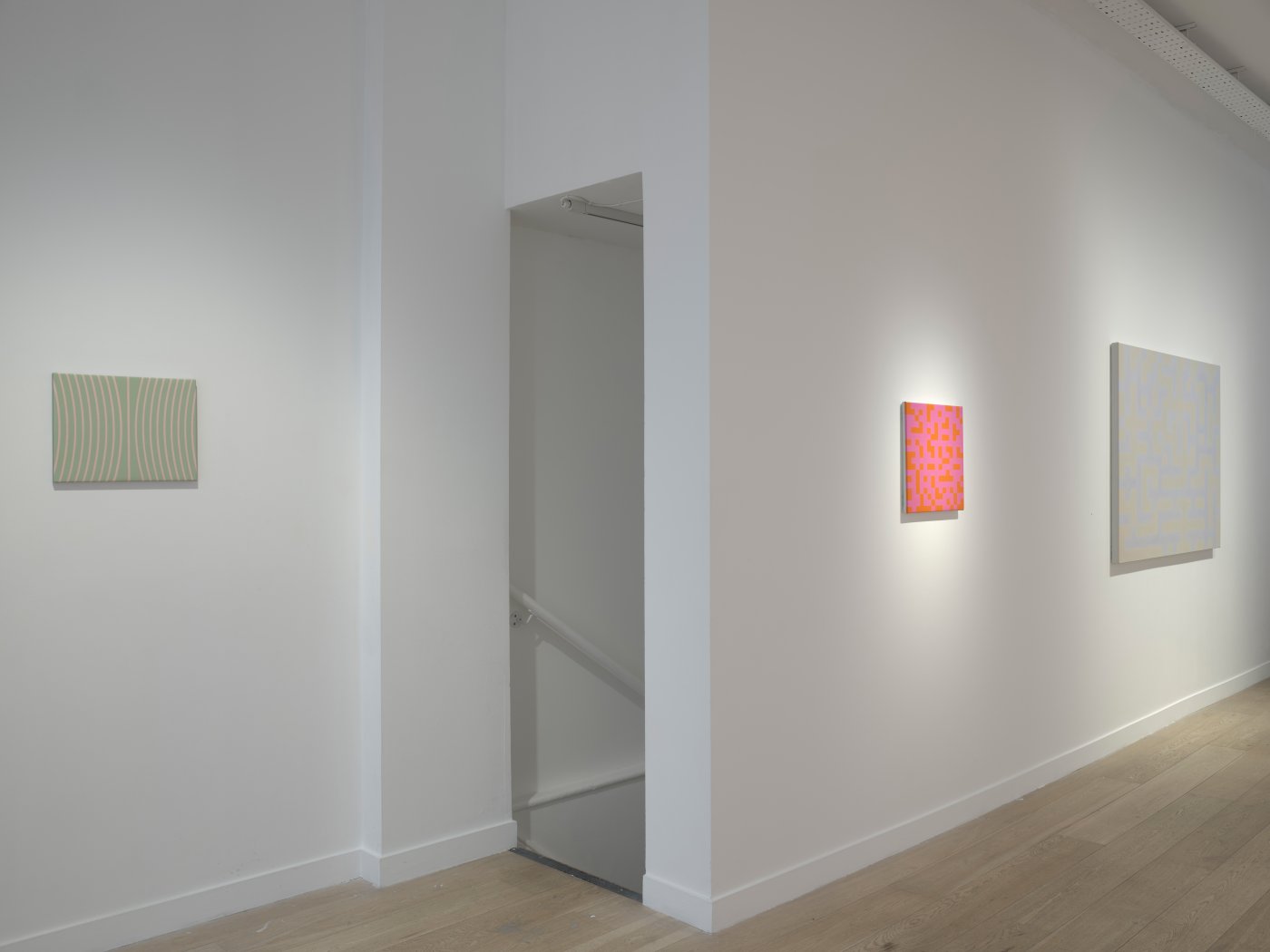 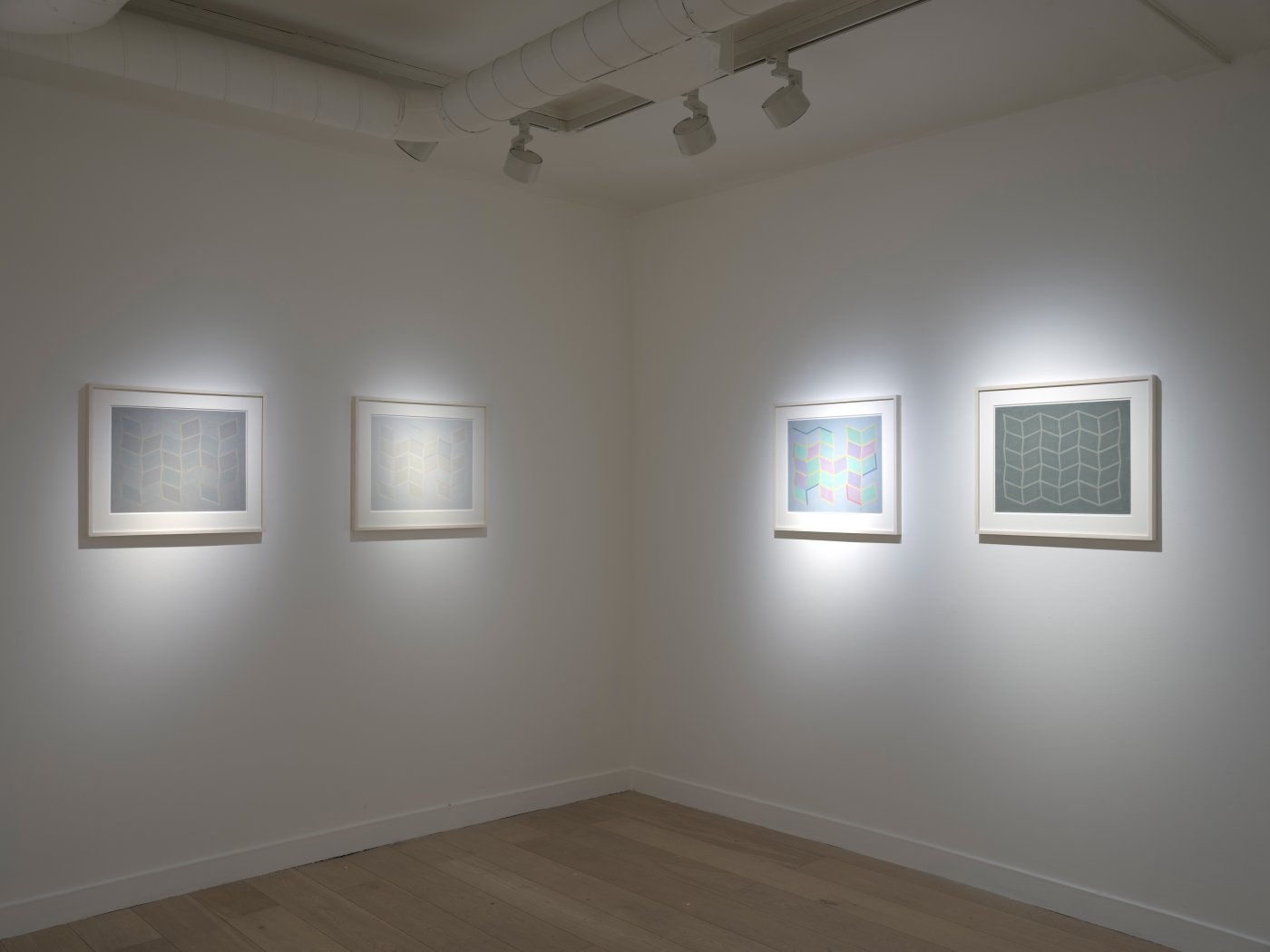 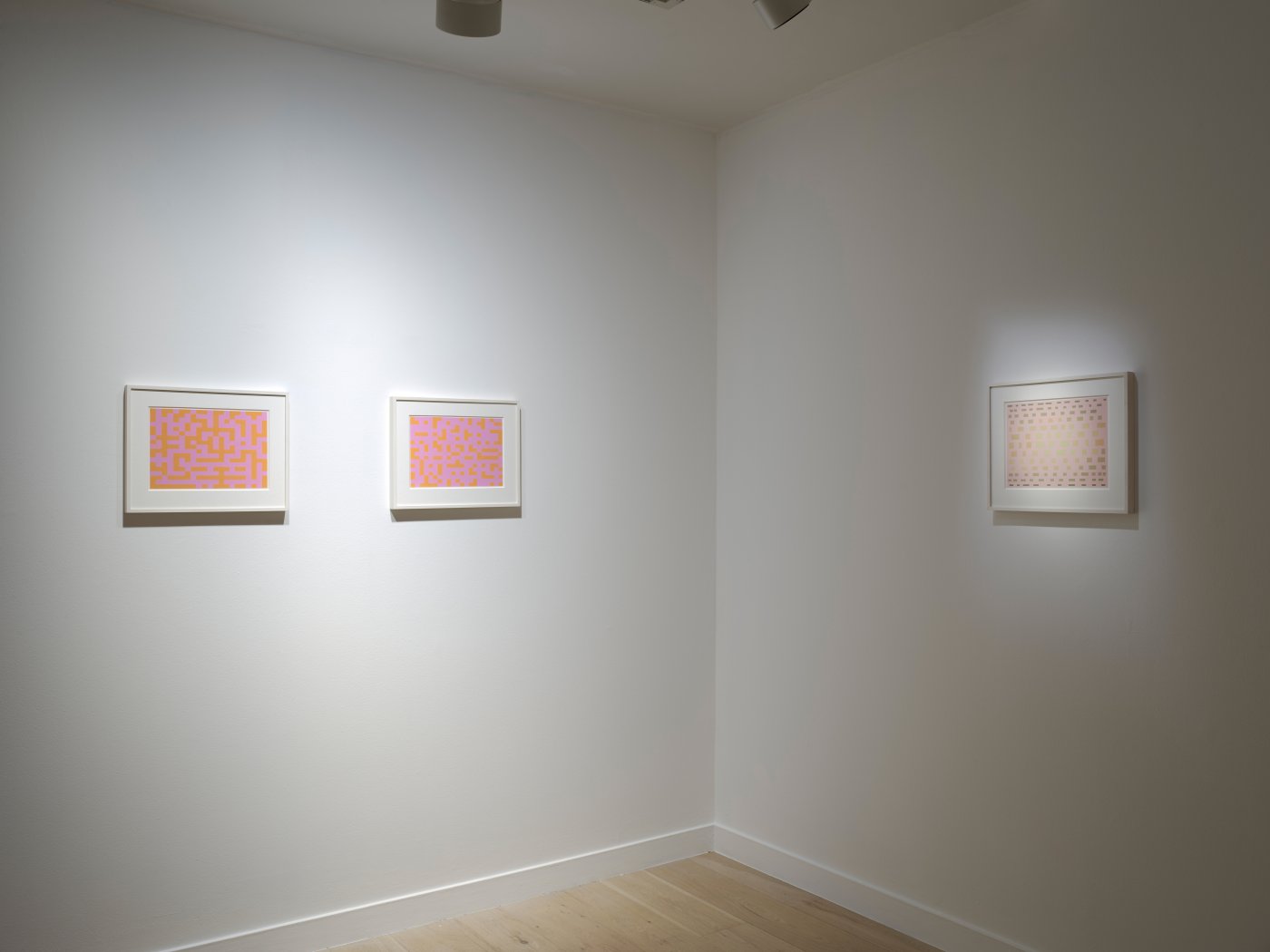 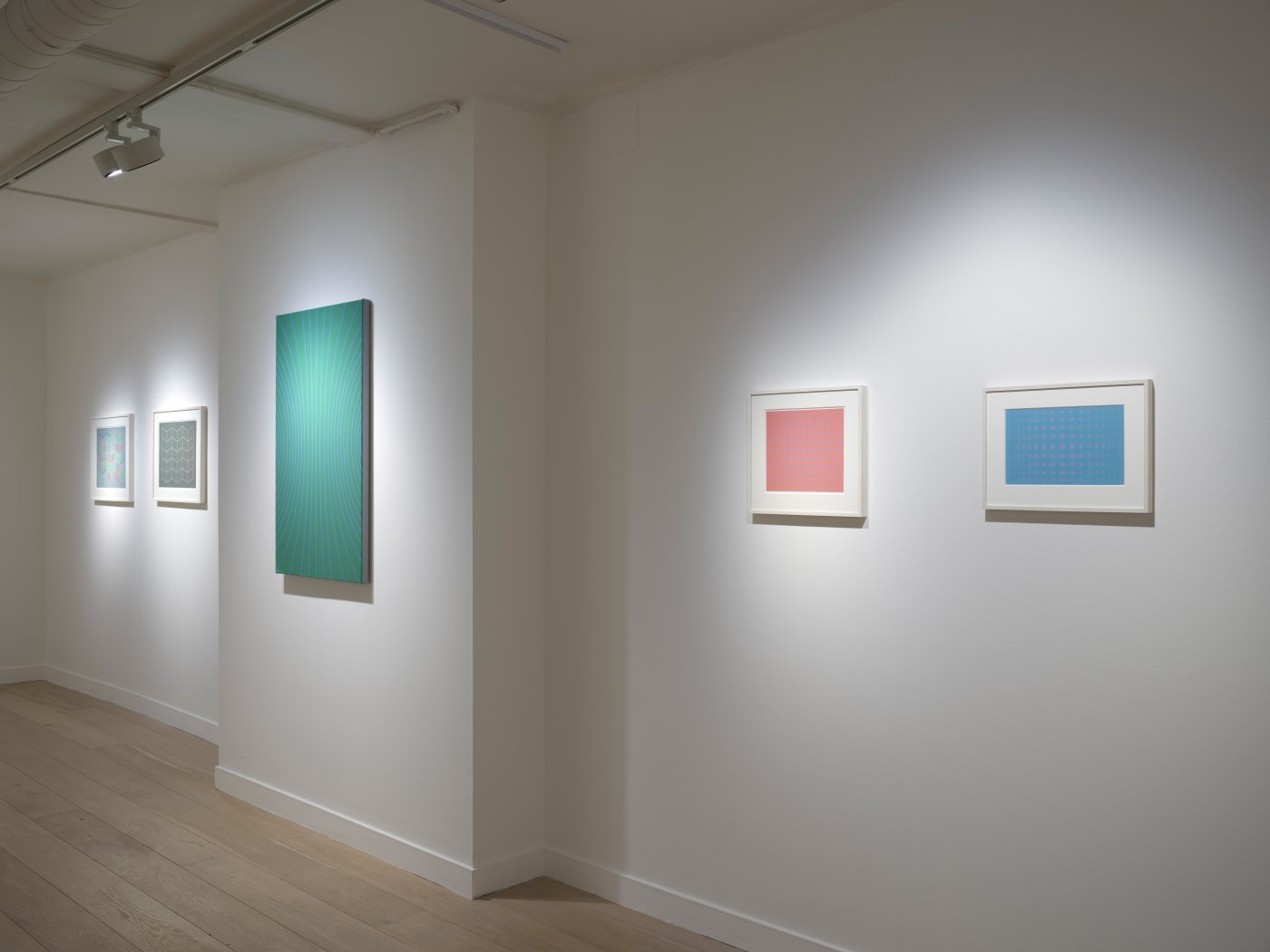 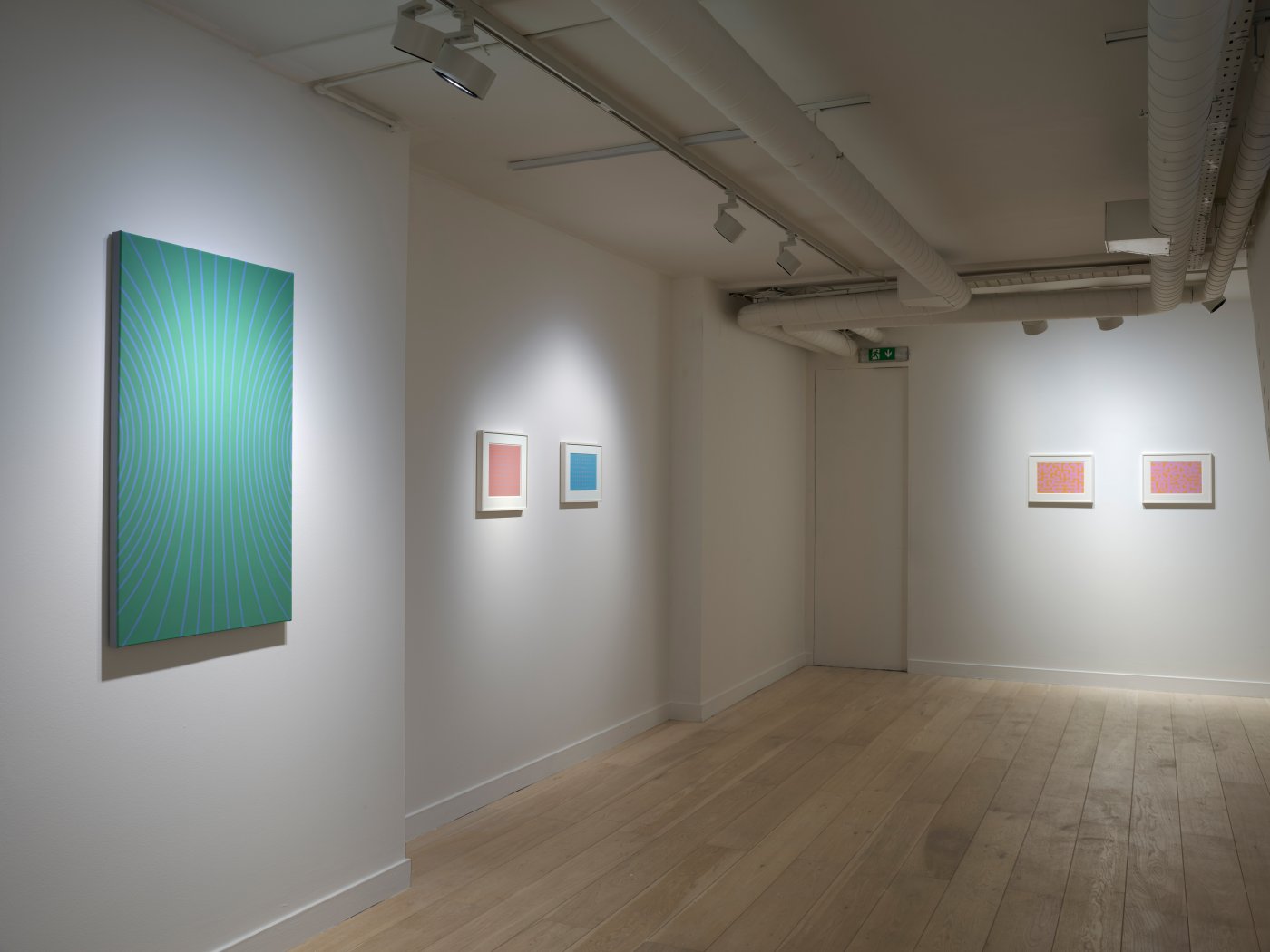 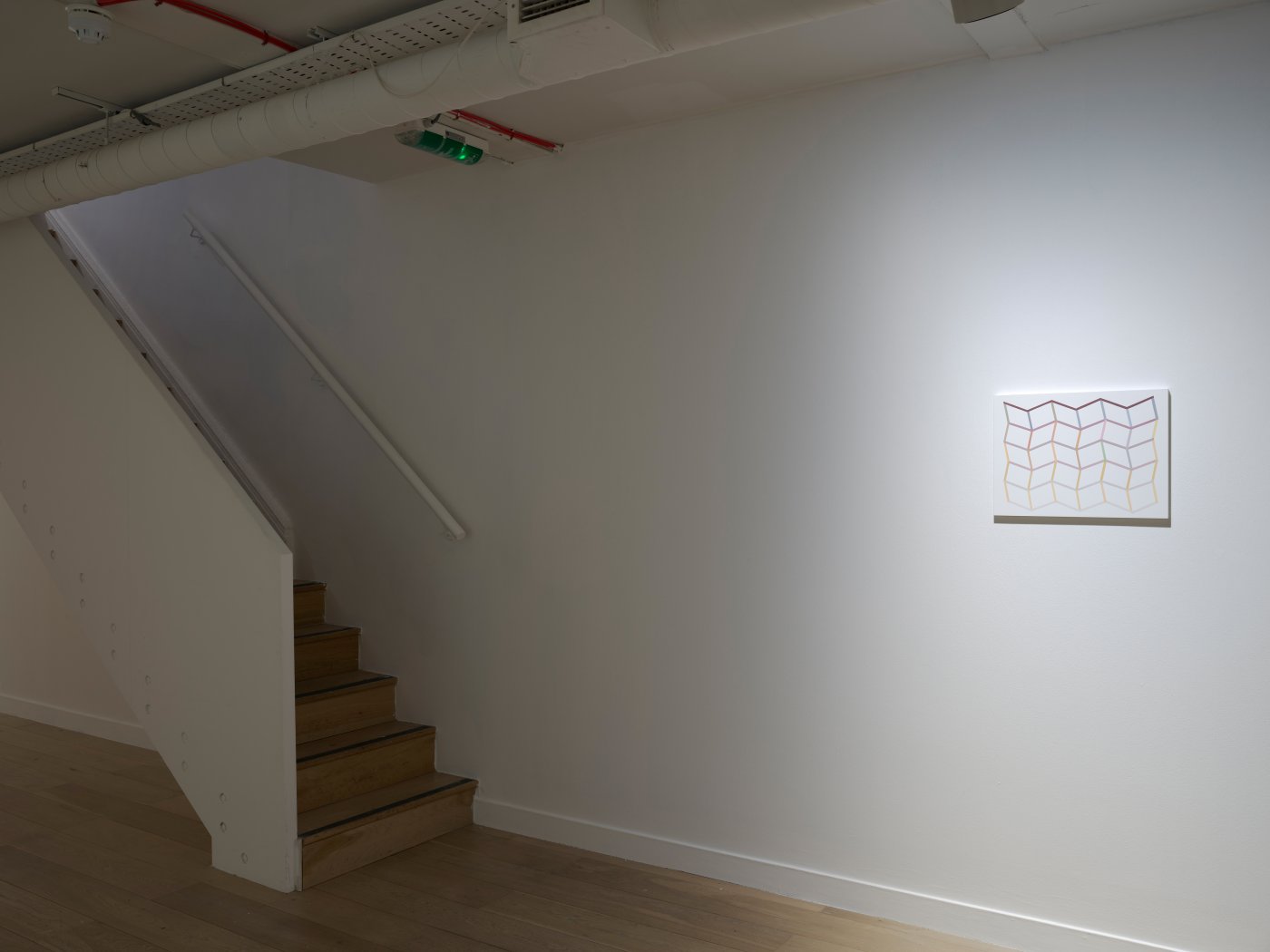 Sorrell’s work constitutes an open-ended enquiry into the nature of perception. His position is that an abstract painting can be autonomous – an image that exists in purely visual terms – but that it can also communicate something of its inspiration. He describes the dynamic space between visceral bodily sensation and fleeting visual impressions as the starting point for his work. Physical and sensory experiences are rendered into pictorial structures that then serve as a launch pad from which the ‘technical chess game’ of making a painting – the creation of a new image – can emerge. Importantly, the paintings also address the temporal or ephemeral nature of these visual/visceral experiences. Just as the observation of visual phenomena in nature unfolds over time, rather than being fixed in a single instant (as in a photograph) Sorrell’s paintings are carefully calibrated to reward extended viewing. These new works are finely tuned so that they have an ongoing complexity that belies their initially reductive appearances.

As in Sorrell’s first show at the gallery many of the new paintings are rooted in the experience of landscape, light and nature, as suggested by titles such as Coast (2022), Orchard (2022) and Moorland (2022). However, Sorrell’s recent work also inevitably reflects upon the experiences of the last two years, a time of enforced seclusion and resulting interiority.

He describes the origins of the painting entitled Ember:

‘Imagine you are lying in bed, looking up at the room. It’s dark. Gradually, the blackness is replaced by warm and cool blacks. Then, it’s not just black, or grey, but warm and cool tones of blues, browns, violets. Ephemeral ‘pops’ of magenta, orange, turquoise, electric blues and greens emerge and recede, like an ember’s soft glow. The colour seems to fizz, pulse, glow or move – it’s not static. . .’

However, Ember is not a representation of these visual phenomena, but rather takes them as the raw material from which a painting, an autonomous image rendered in oil paint on canvas, can be constructed. If successful, the resulting image will communicate something of the sensation that initiated it.

Also included in the exhibition is Overland (2022), an exciting, site-specific piece conceived especially for the exhibition. Painted directly onto the gallery wall, rather than onto a surface hanging upon it, the image interacts dynamically with the exhibition space. Overland continues the investigations initiated in the Settle series, included in Sorrell’s first show at the gallery, exploring the interaction of two colours across a plane. Scale determines a bodily as well as visual engagement with the image, which at a certain distance fills our field of vision.

Fred Sorrell (born London, 1984) studied at Falmouth College University (2004-8). Recent solo exhibitions include ‘Long Tide’, Parafin, London (2020) and ‘Between Sea and Sky’, Saturation Point, London (2019). He has participated in numerous group exhibitions including at Kristin Hjellegjerde Gallery, London, Royal Standard, Liverpool, and Cob Gallery, London. He has undertaken residencies at The Florence Trust, London (2012-13), Takt, Berlin (2009) and Kerel de Grote Hogeschool, Antwerp (2008). Later in 2022 he will participate in a group exhibition at Hestercombe House. He lives and works in London.