Art is a festival in which a narrative is told.
It makes its drama constantly; and speaks
In human flesh, the actor ever bold,
On canvas, wood or paper, an audience it seeks.

—Frank Walter, from the poem ‘What Art Is’

David Zwirner presents an exhibition of work by Antiguan artist, writer, and polymath Frank Walter (1926–2009) at the gallery’s London location. Organised in collaboration with the artist’s family, the exhibition marks the first solo presentation of Walter’s work in London. 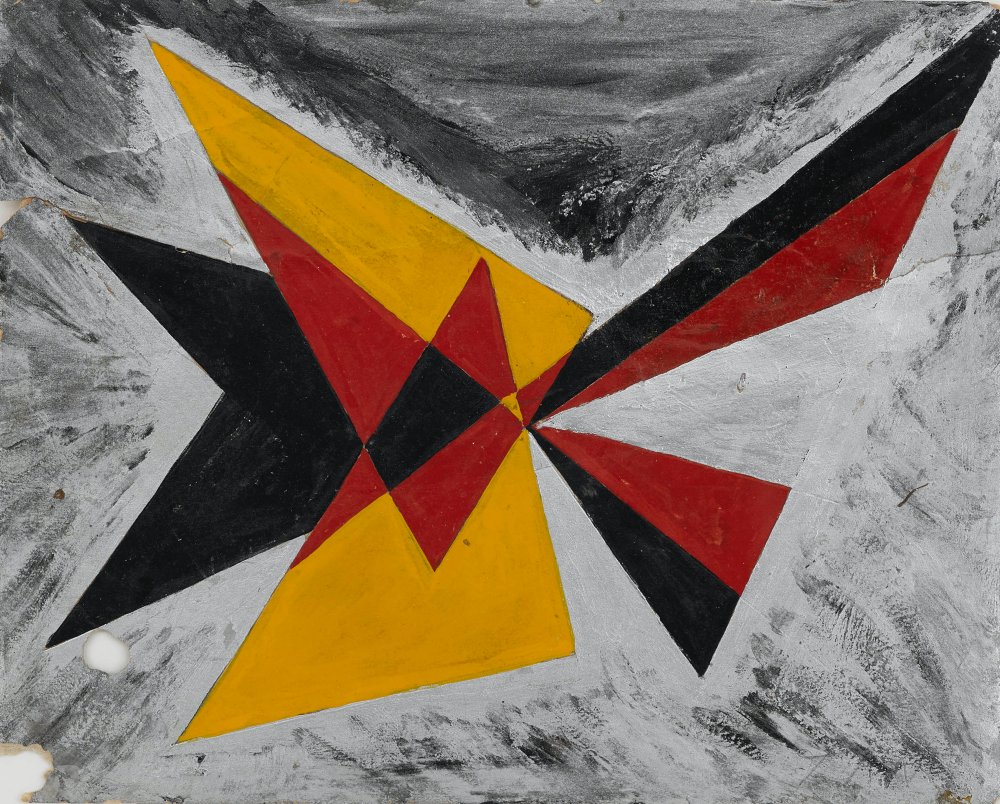 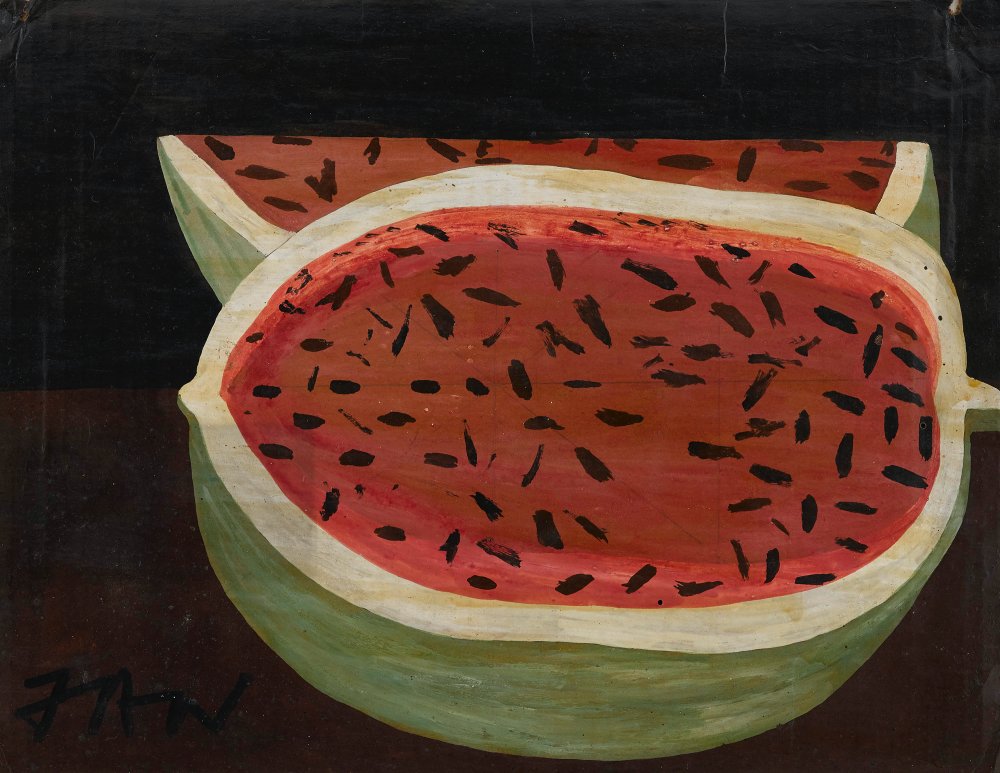 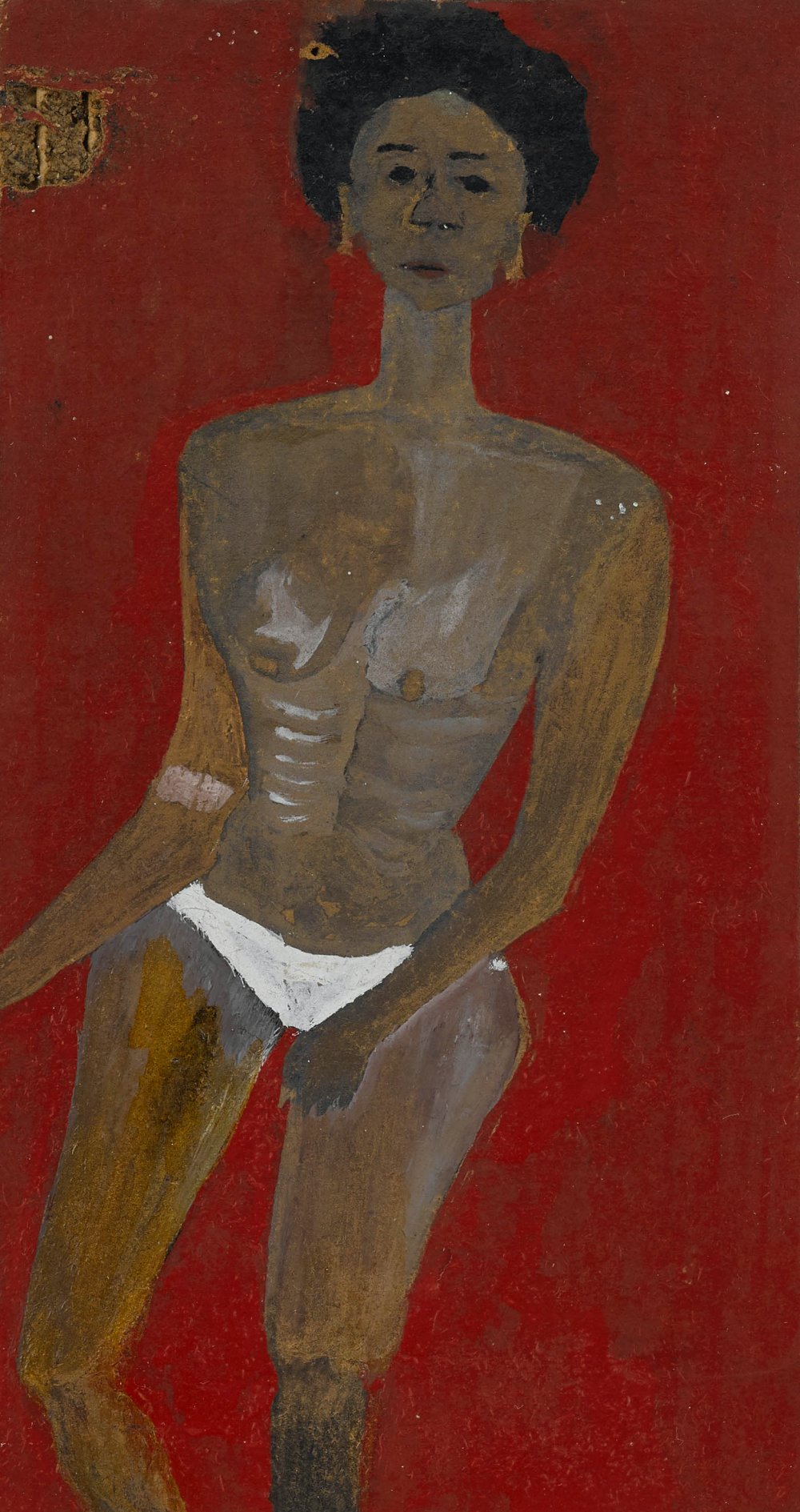 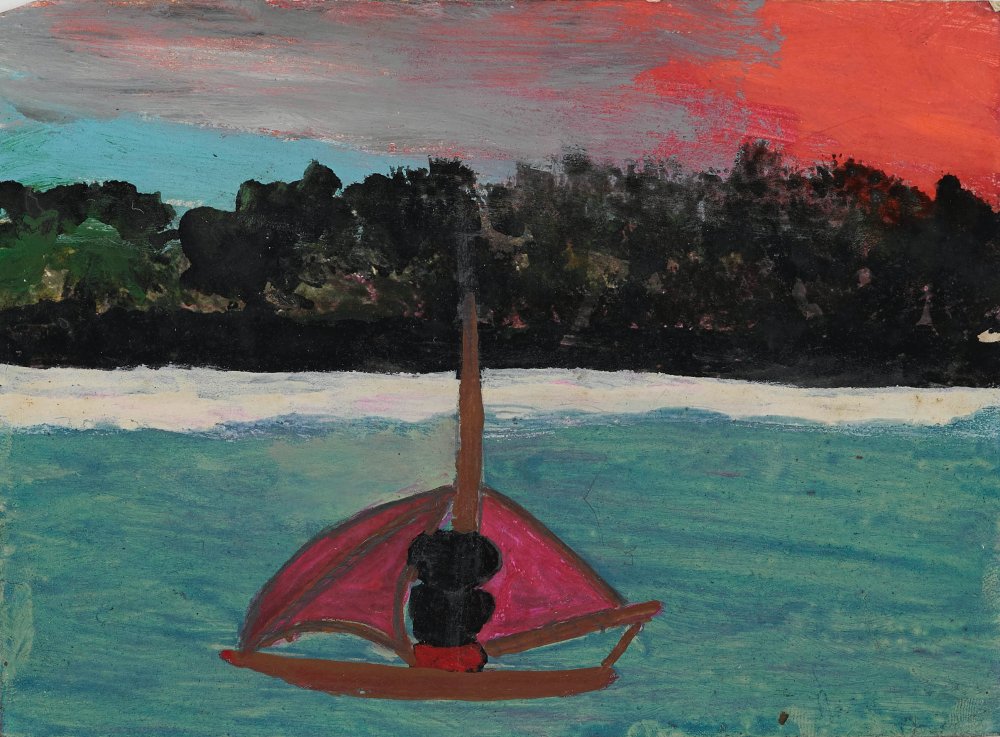 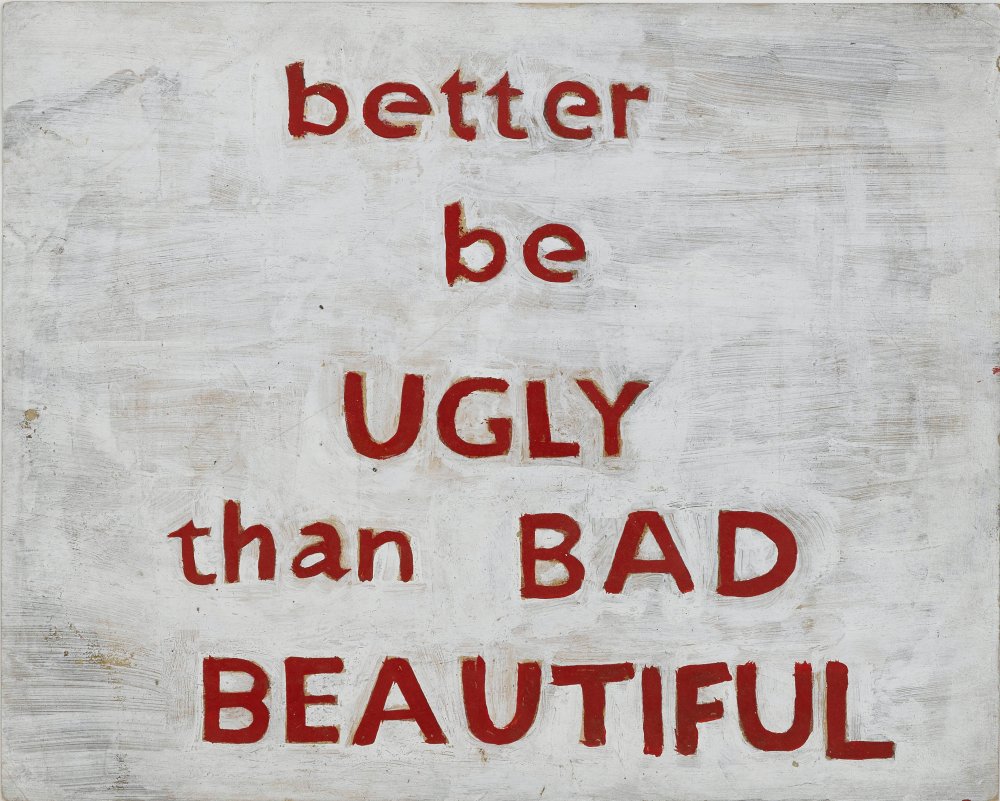 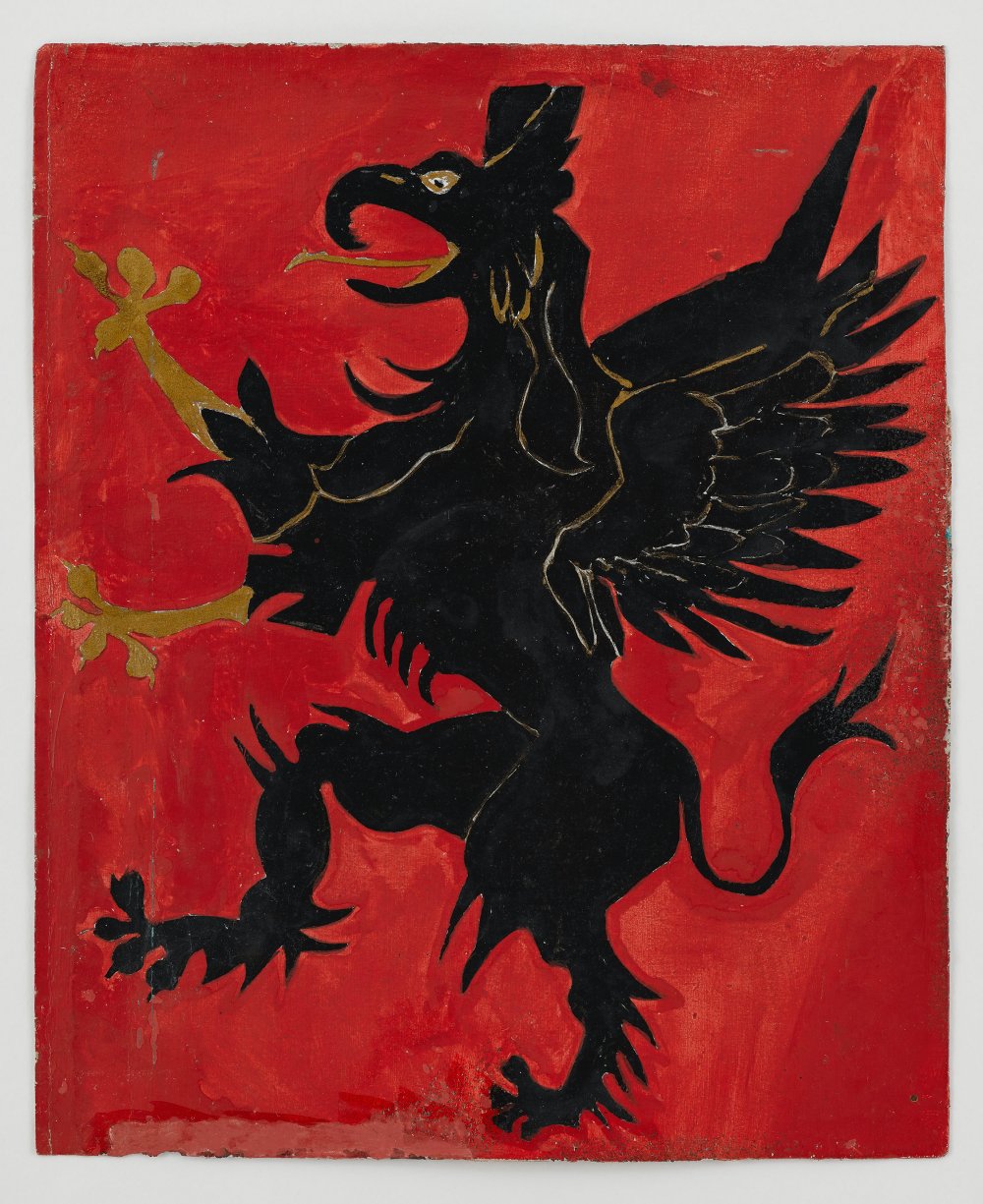 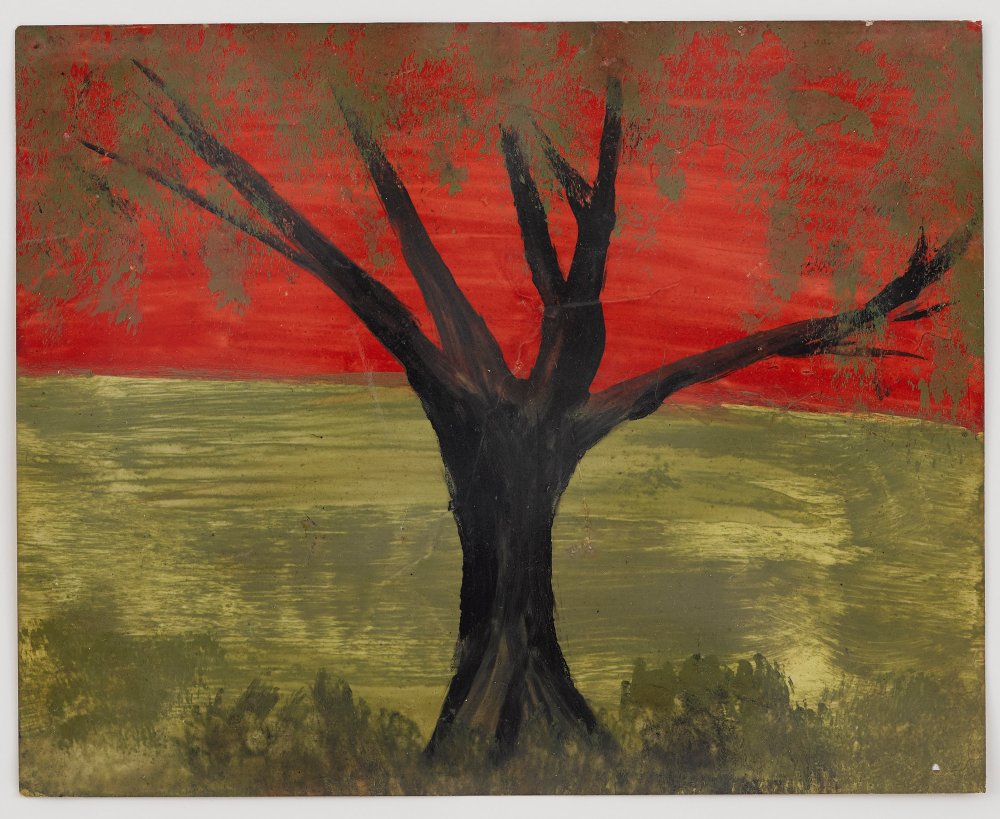 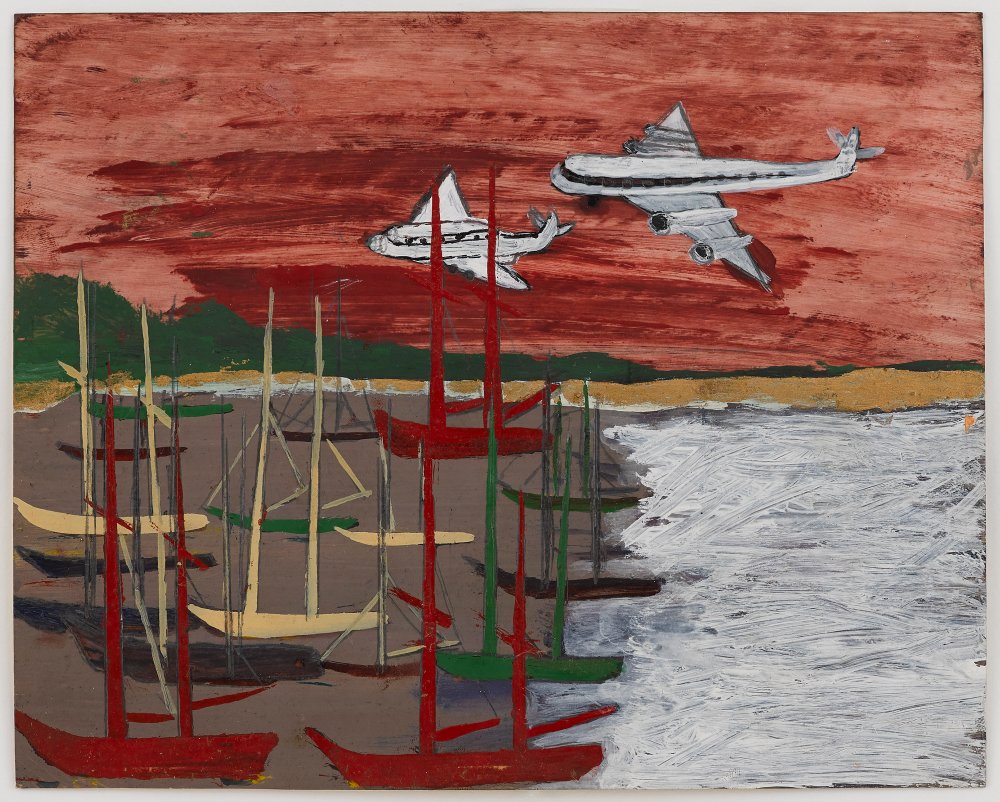 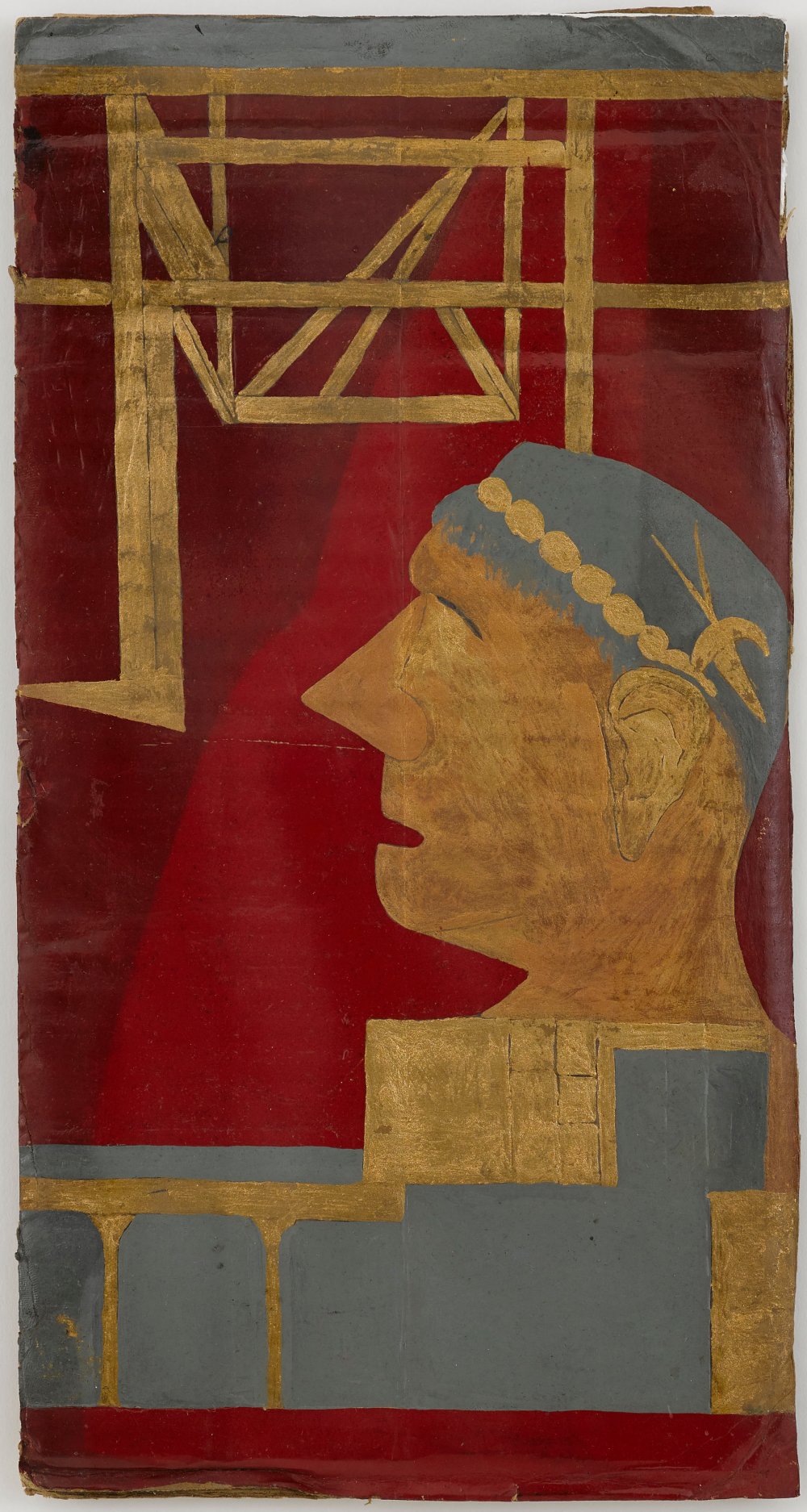 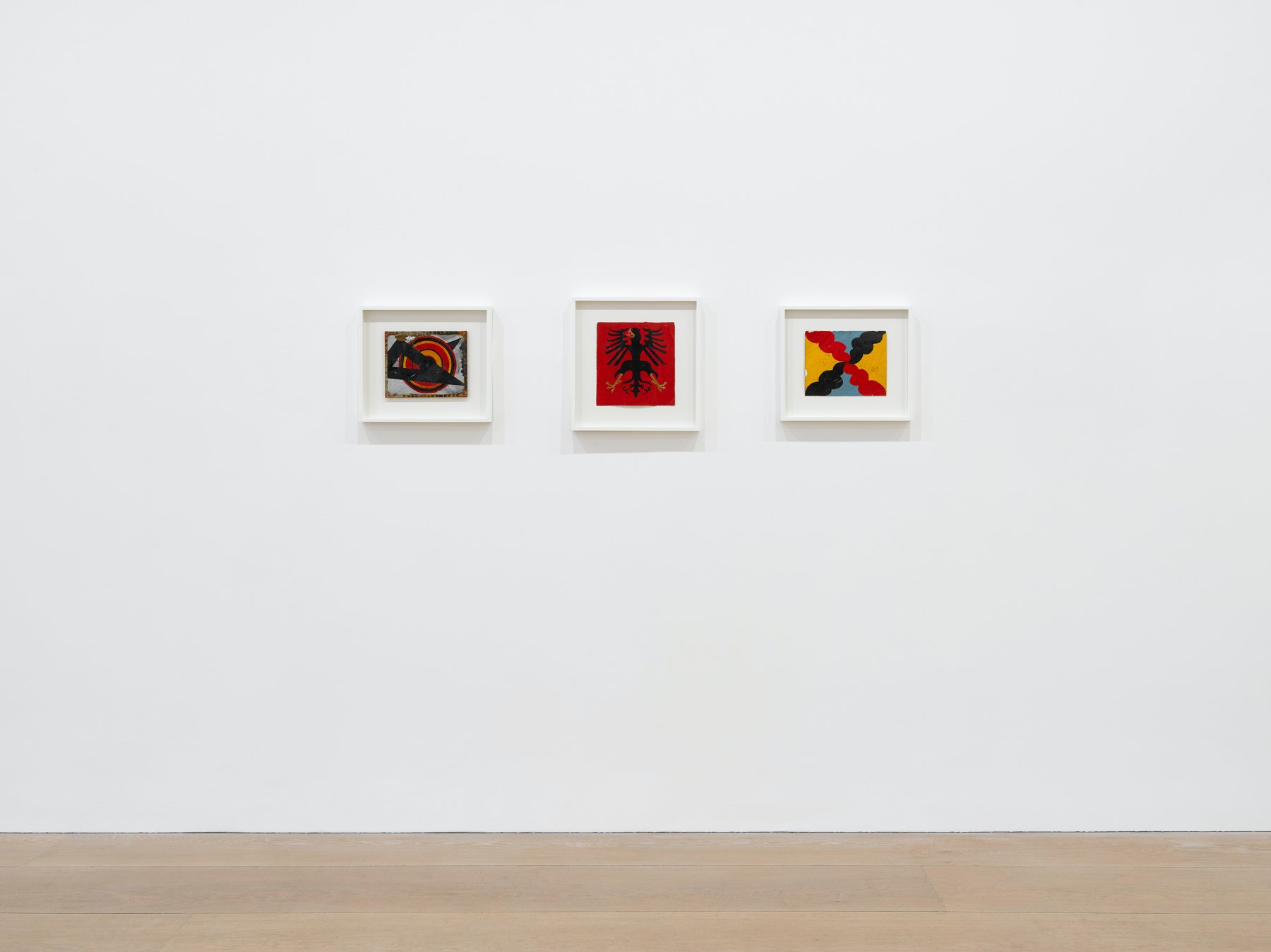 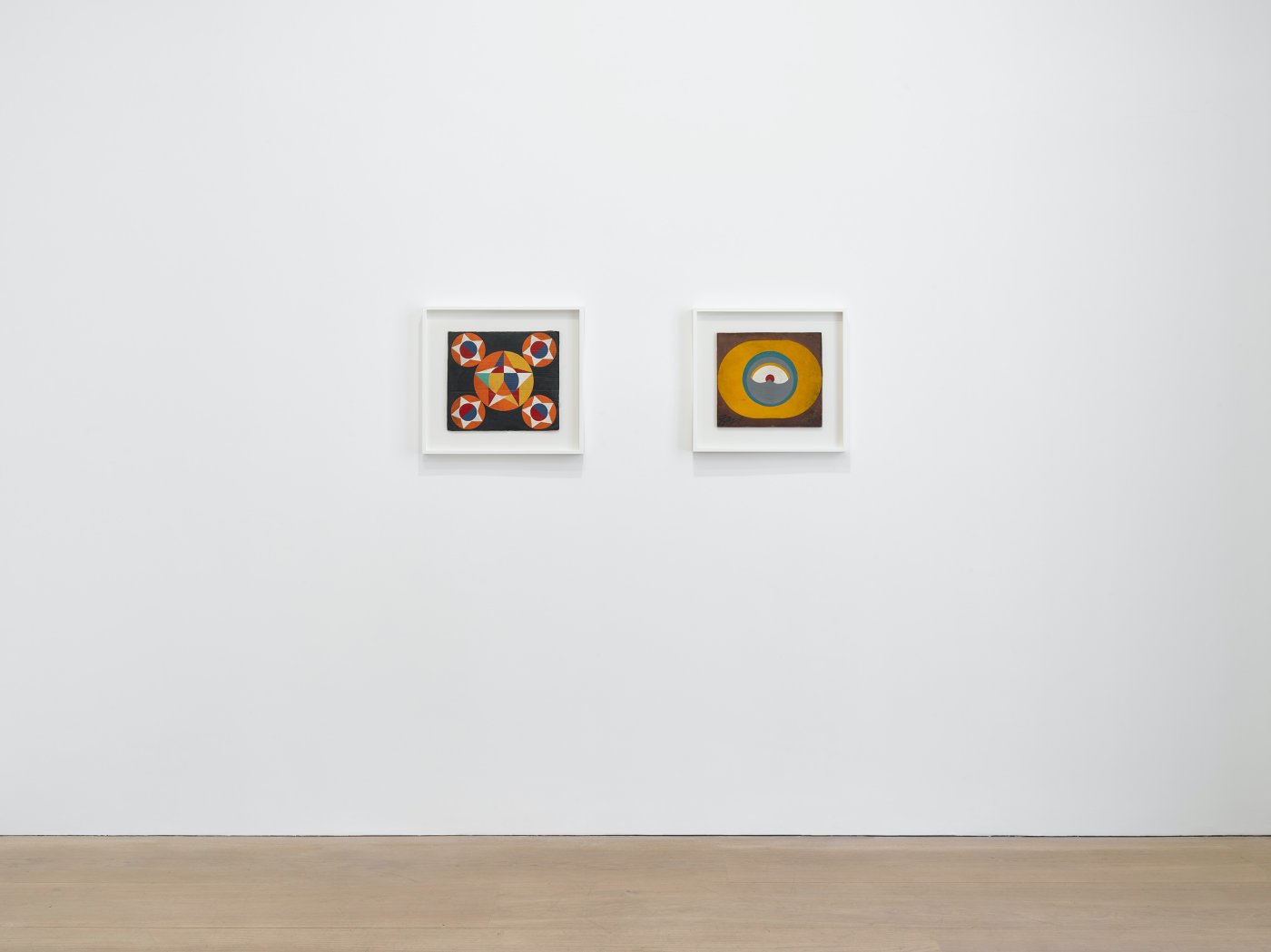 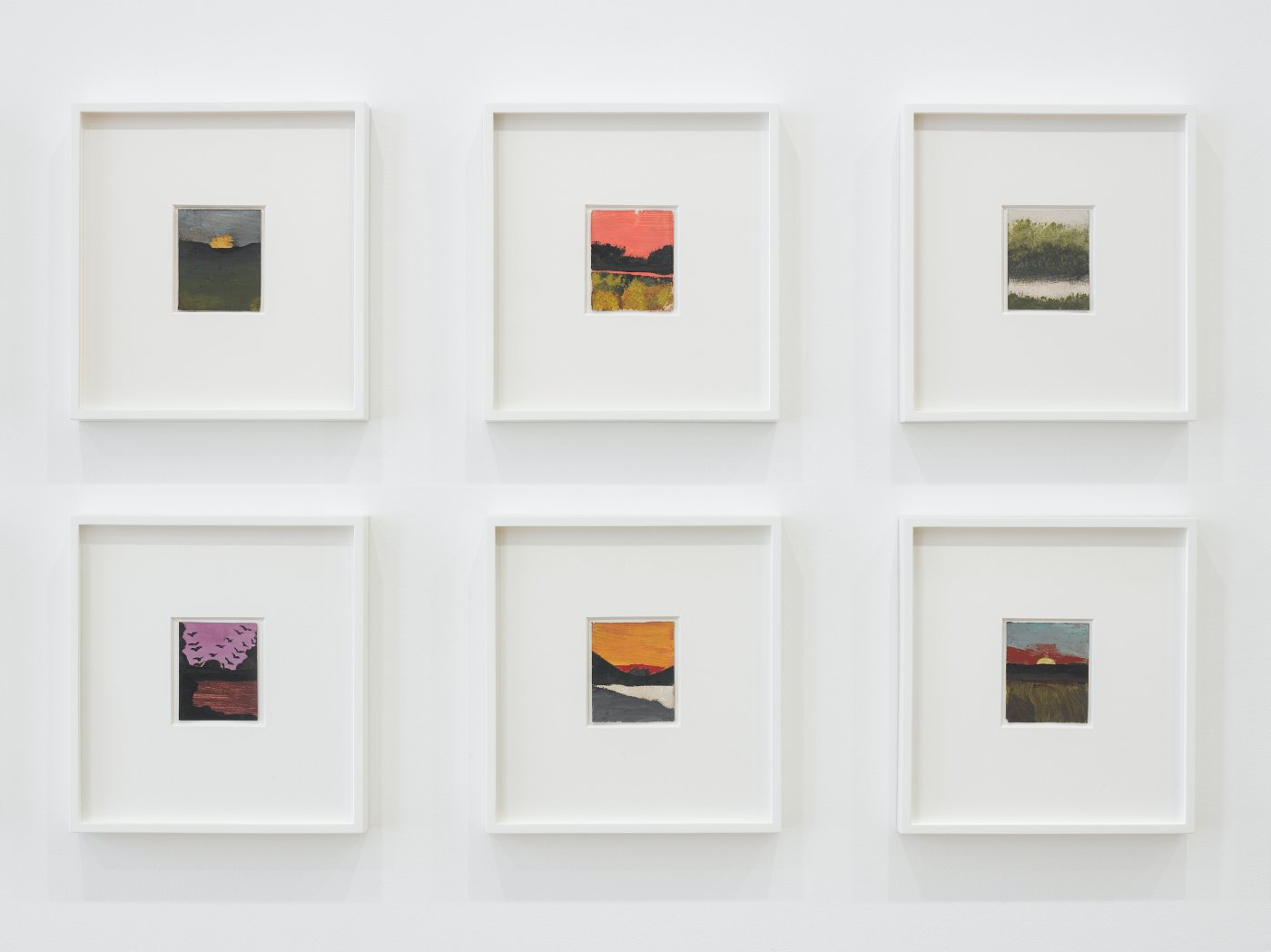 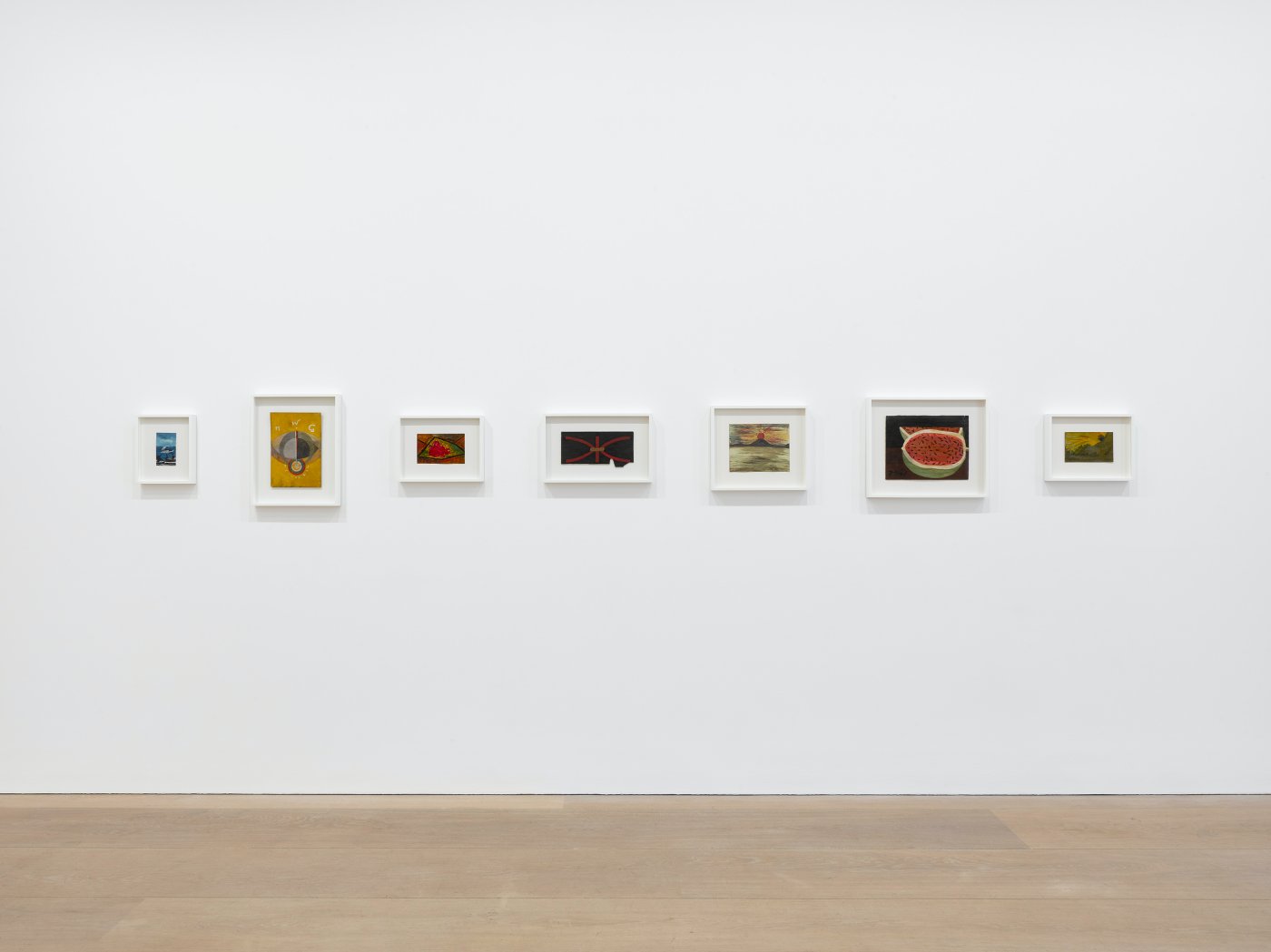 Building upon his recent, celebrated retrospective at the Museum für Moderne Kunst, Frankfurt, the presentation showcases the immense depth of Walter’s intellect and creativity and his prolific artistic output. It includes several works that have never been exhibited before.

Over the course of six decades, Walter, a descendant of enslaved persons and plantation owners, created a vast body of work that encompasses a variety of media, styles, and formats. His paintings range from highly individualistic, vividly coloured landscapes that evoke the Romantic spirit of William Blake and Caspar David Friedrich to formally inventive and probing portraits, many of which reflect the complexities of racial identity, to systematic, abstract compositions reminiscent of the paintings of Hilma af Klint, all rendered in the artist’s own absorbing palette and distinctive visual style. Describing the breadth of Walter’s art and his innately creative spirit, Susanne Pfeffer, director of the Museum für Moderne Kunst, writes, ‘The complexity of Walter’s subject matter is matched by the great variety of his materials. He created works on wood, Masonite, cardboard, paper, linoleum, and the backs of photographs, and he painted and drew with oil paint, tempera, watercolour, crayon, pencil, shellac, and glitter. When he was not painting, he wrote; when he was not writing, he made sound recordings. Walter’s creativity had an unbelievable intensity, which one can see, feel, and sense in his work.’(1)

Though his work was deeply personal and autobiographical, Walter believed in the universal accessibility of his art. As Nina Khrushcheva, who has studied his writing and work, notes, ‘The impressive culmination of Walter’s output demonstrates that an artist’s oeuvre often maps the contours of his life. Each piece Walter created contributed to his self-invention and aided in the construction of his identity and worldview. The immediacy of his images … forms layers of meaning and builds on significant memories, ideas, and fantasies. In total and in situ in his home, Frank Walter’s work formed a holistic and ingenious universe.’ At the same time, ‘Walter saw himself as a Renaissance man. He was versed in a variety of arts and sciences and ordered his art practice in a universal way, covering many aspects of knowledge and human interactions.’(2)

During the last years of his life, Walter developed a close friendship with the art historian Barbara Paca, and the two worked to bring his art to the global stage. On the importance of his work, Paca writes, ‘As a kind of creative compensation for the discrimination he faced in Europe and the hardships he experienced, Walter’s diverse interests and universalism take on added meaning. His vast knowledge and ability in art, politics, science, philosophy, history, and spirituality meant he was capable of assessing life’s many complexities, from ecosystems to treatises.’(3) She adds: ‘The artist’s ultimate desire was to affect his audience in a positive way, lifting even the most melancholic and societally bereft to a higher level of being.’(4) In 2017, eight years after he passed away, Walter finally received the international recognition he deserved when he was honoured at the 57th Venice Biennale as representative for Antigua and Barbuda—the first time the island nation had been featured at the biennial—with a major retrospective exhibition curated by Paca, Frank Walter: The Last Universal Man, 1926–2009.

The presentation in London features a range of Walter’s figurative and abstract paintings, varying from miniature landscapes of Antigua and Scotland, painted in rich tropical colours and subtle nocturnal hues, to compositions of geometric forms representing celestial forces and other phenomena. The exhibition also includes paintings of heraldic symbols and imagery—the first time a significant group of these works has been shown. These paintings depict mythic beasts and dragons on red grounds and stem in part from the artist’s belief that his ancestry linked him to European nobles and royalty, such as Franz Joseph of Austria and Charles II. More generally, the works reflect Walter’s strong affinity for and complex relationship to European history and culture. A selection from the artist’s ‘cartographic series’ is shown for the first time as well. In these works, Walter paints a map of Antigua in the centre of the composition while surrounding the landmass with views of the sea, tropical trees, and other features of the island’s physical landscape.

Frank Walter (1926–2009) was born Francis Archibald Wentworth Walter, on Horsford Hill, Antigua, in 1926. From a young age, Walter’s intellect was apparent to his family, and he quickly gained the admiration and respect of his local community. Feeling a deep connection to his native land, Walter studied agriculture and the sugar industry—the basis of Antigua’s economy—and at the age of twenty-two, he became the first person of colour to work as a manager within the Antiguan Sugar Syndicate, where he helped modernise harvesting and production methods and also sought to improve the status and labour conditions of the workers. He spent much of the 1950s travelling and learning advanced agricultural and industrial techniques in England, Scotland, and West Germany. During this time, he experienced the depths of racism and bias against people of colour, and he often resorted to working as a day labourer to get by. While in Europe, Walter pursued a variety of creative and artistic outlets, including drawing and painting as well as writing prose, philosophical texts, and poetry. The artist returned to the Caribbean in 1961, where, in addition to painting, drawing, and writing, he began making sculptures, photographs, and sound recordings.

Throughout his life, Walter struggled with mental health issues, and he often experienced hallucinations and other neurological phenomena. As the neurosurgeon Caitlin Hoffman, who has studied and written about Walter, notes, ‘While psychiatrists and neuroscientists ascribe the behaviour and thought processes demonstrated by Walter to an imbalance of neurotransmitters and receptors, the resultant capacity for exploration of other dimensions of the physical world, and one’s own mind, confers astounding potential for new creation, new thought, new perspective.’(5) In the early 1990s, Walter designed and built his home and studio on Bailey Hill in Antigua, where he spent the remainder of his time in relative isolation, reflecting, writing, and making art inspired by his thoughts, knowledge, journeys, and surroundings.

In addition to his retrospectives in Frankfurt and Venice, Walter has been the subject of solo exhibitions at The Douglas Hyde Gallery, Trinity College, Dublin, in 2013, and Harewood House, Leeds, UK, in 2017. In 2019, his art was featured at the 58th Venice Biennale as part of the group exhibition Find Yourself: Carnival and Resistance, exploring Carnival in the culture of Antigua and Barbuda, curated by Barbara Paca and Nina Khrushcheva.

The Frank Walter Catalogue Raisonné project is currently being undertaken by the Walter family and Barbara Paca.