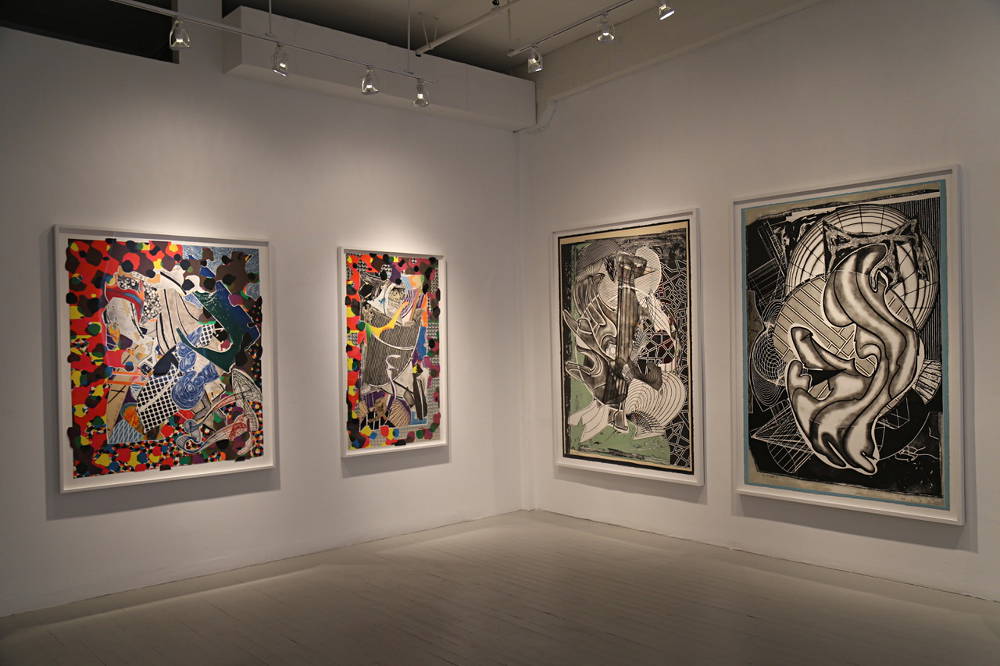 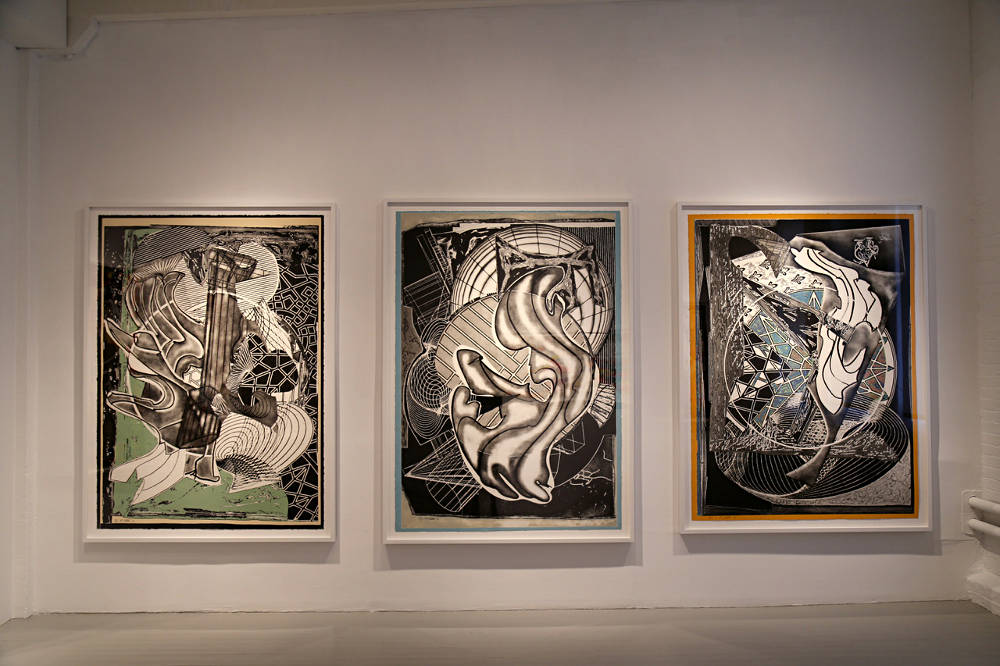 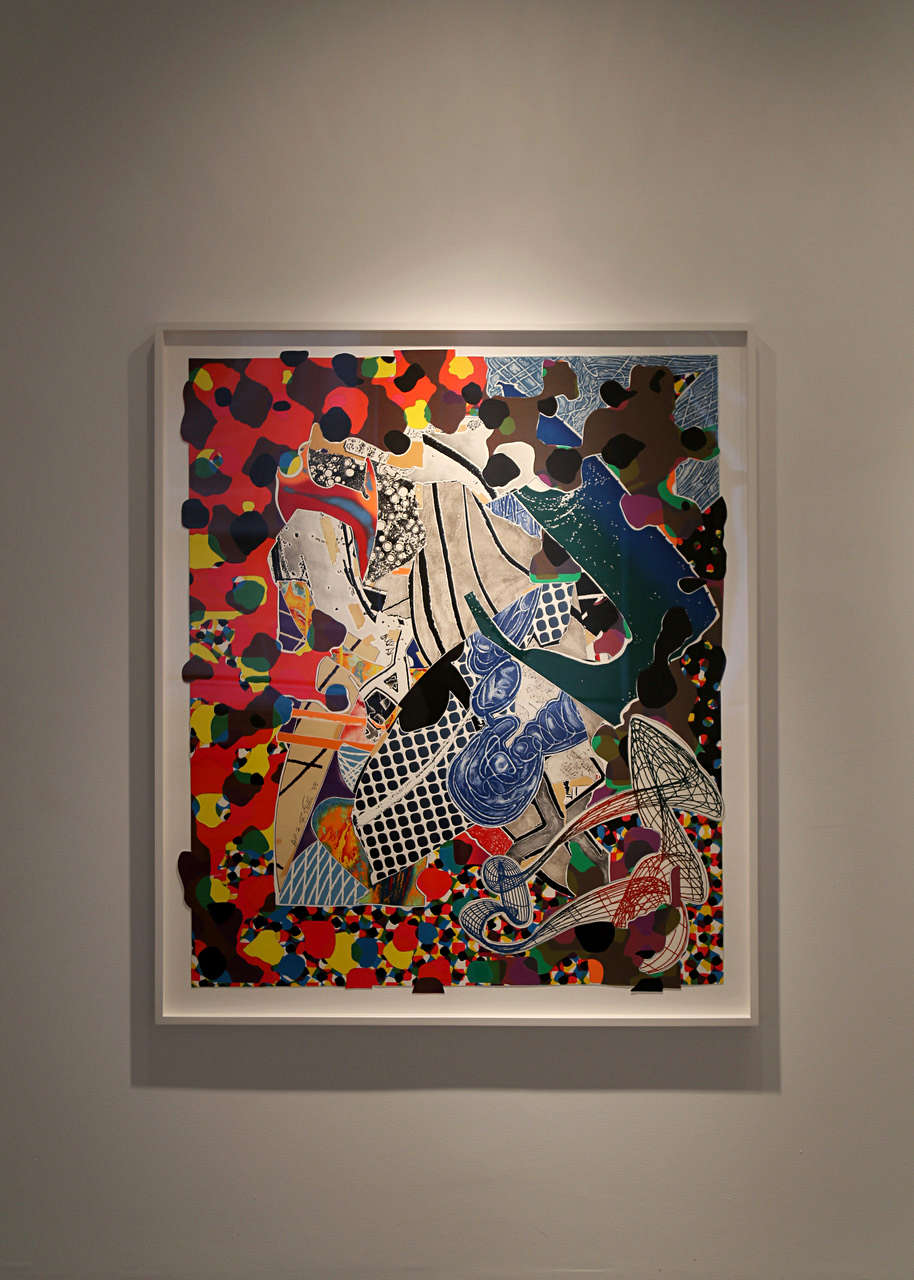 The seven prints being exhibited stem from the Moby Dick engravings, deckled edges as well as the stand alone “Candles”, which refers to chapter 119 of Herman Melville’s Moby-Dick.

The dominant motif of the Moby Dick engravings is the wave-and-whale shape. It pays and trashes about in a sea of motifs from earlier metal relief and print series.

The mixed-media intaglio prints of the Moby Dick engravings are solemn in their black and white tonalities enlivened with subtle washes of color. In abstract terms, Stella conveys a dramatic sense of roiling waters and breaching whales. The expressive gravity of this series is caught up in the title
“Jonah Historically regarded”, a reference to chapter 83 of the novel. The Old Testament story of Jonah, who deserts God and is thrown overboard during a storm at sea and swallowed by a whale, but who lives to submit to God’s will, is a central metaphor in Melville’s grand narrative.

The print “The Candles” refers to the fiery balls of lighting, also known as St. Elmo’s fire, that illuminate the mast tops of Captain Ahab’s whaling ship, the Pequod, during a thunderstorm. A sense of this dramatic phenomenon is caught in the radiant reds and oranges of Stella’s “The Candles”, a lithograph with screen printed and collaged elements.

The Moby Dick mixed-media deckle edges prints on view stand in dramatic contrast to the more open compositions and elegiac tone of the Moby Dick engravings. In these prints, Stella began with a series of working collages from which the prints would proceed. The collages were built up with a variety of cutout printed material including snippets of earlier proofs, such as lattice and wave-whale motifs. Also added into the mix were patterns of enlarged color halftone dots and plastic construction grids. Stella had plates produced from the collages, ran proofs and used the the proofs as further imagery to manipulate into final compositions. In the series, Stella gives importance to white unprinted paper and to the tradition of the deckled edge.

Frank Stella was born in Malden, Massachusetts, in 1936. He attended Phillips Academy, Andover, MA, and then Princeton University, where he studied art history and painting. He has been the subject of two retrospectives at the Museum of Modern Art, New York; in 1970 and 1987. Mr Stella had his first print retrospective in 1982, which traveled to fifteen American museums over a four-year span. He had a major retrospective of his work at the Whitney Museum of American Art in 2015. In 2016, the Madison Museum of Contemporary Art held a print retrospective for the artist. A revised catalogue raisonne was published in conjunction with that exhibition, which traveled to several other American museums. Currently on view at the Princeton University Art Museum is Frank Stella Unbound; Literature and Printmaking. The exhibition will then travel to Museum of Contemporary Art, Jacksonville, Florida. Stella’s work features prominently in the collections of major museums, cultural institutions and private collections worldwide.