Hollis Taggart presents an exhibition devoted to the work of Francis Mattson Hines (1920-2016), an artist known for his wrapped paintings, sculptures, and public art projects, especially the wrapping of the Washington Square Arch in 1980. 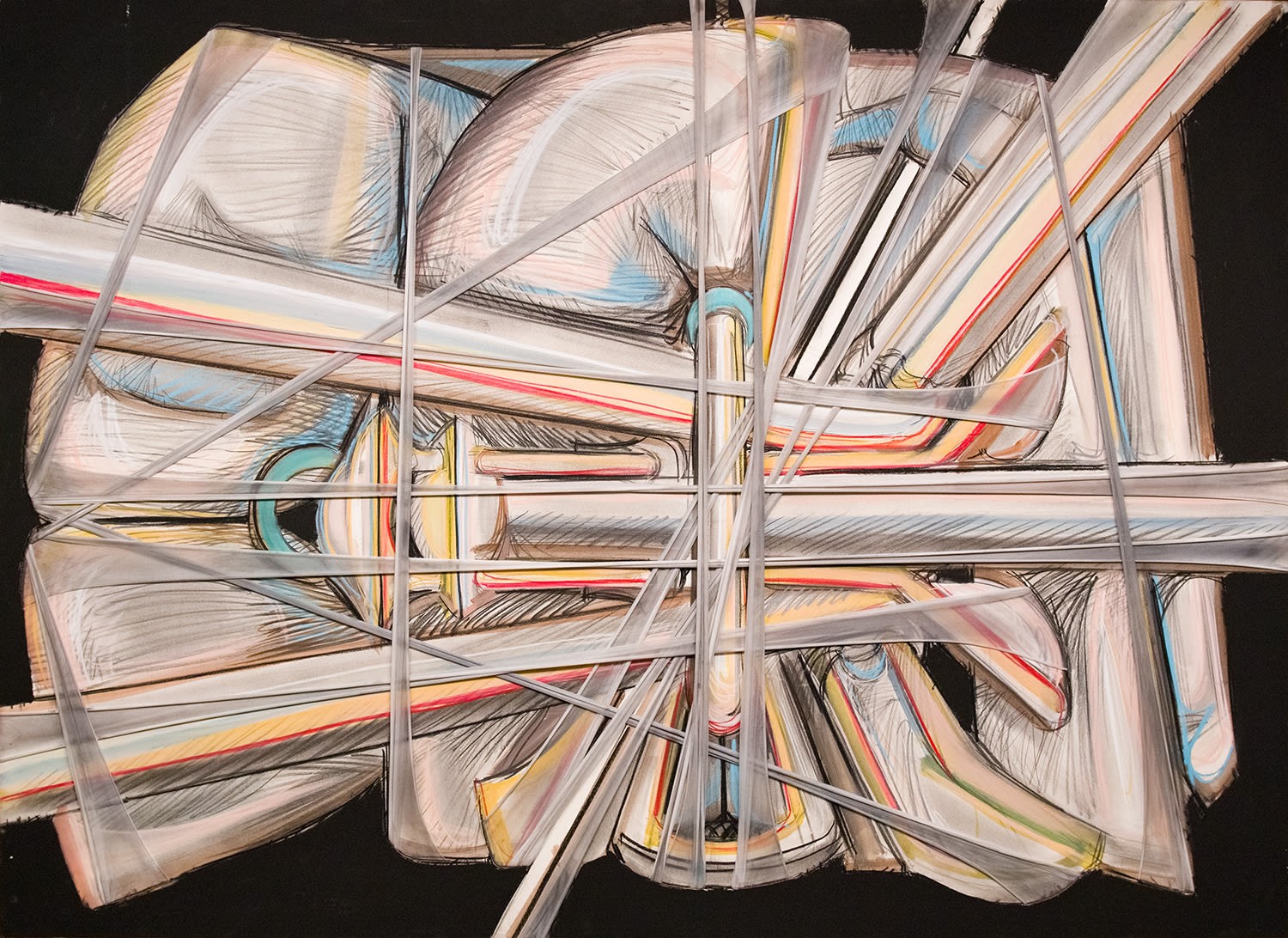 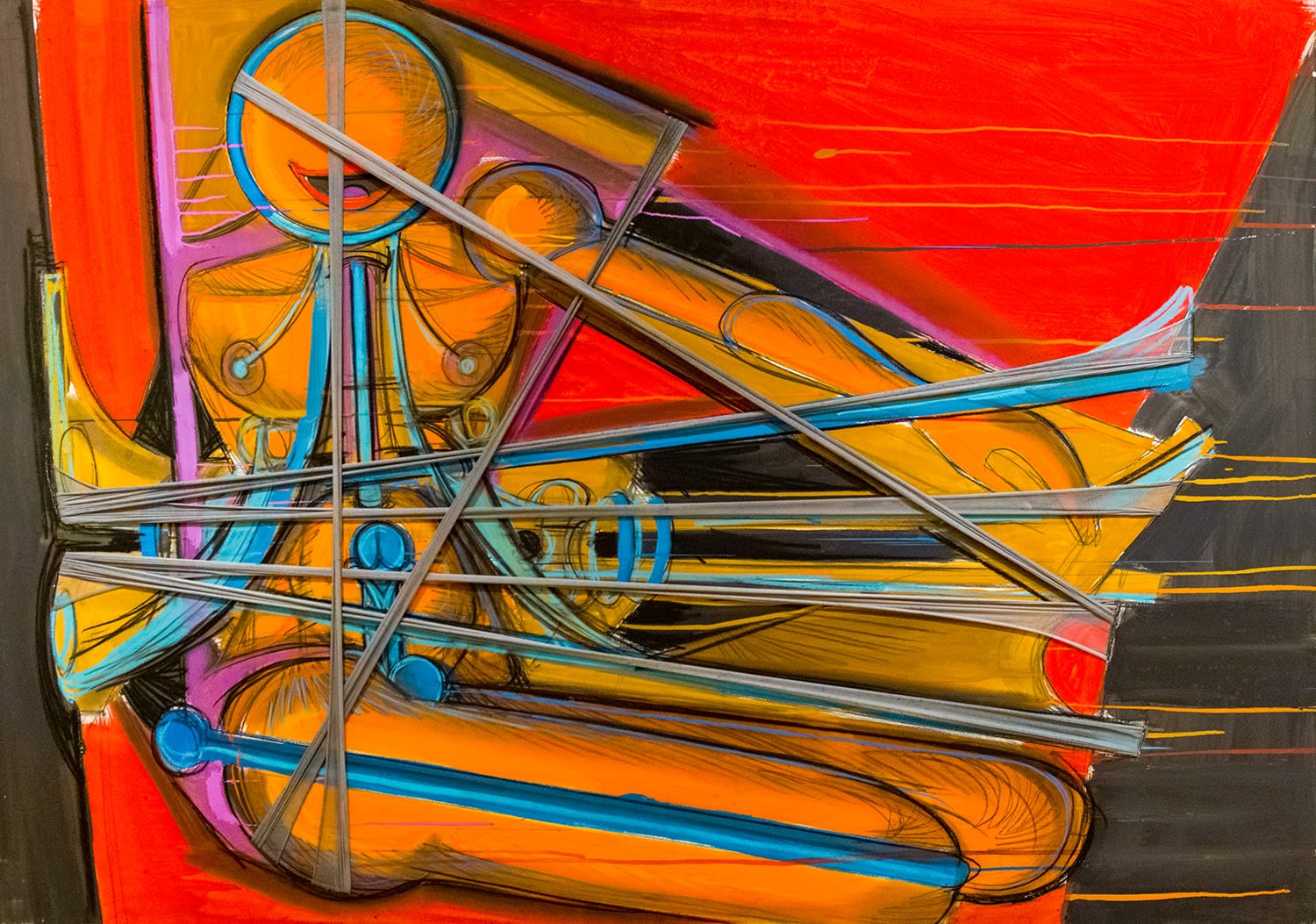 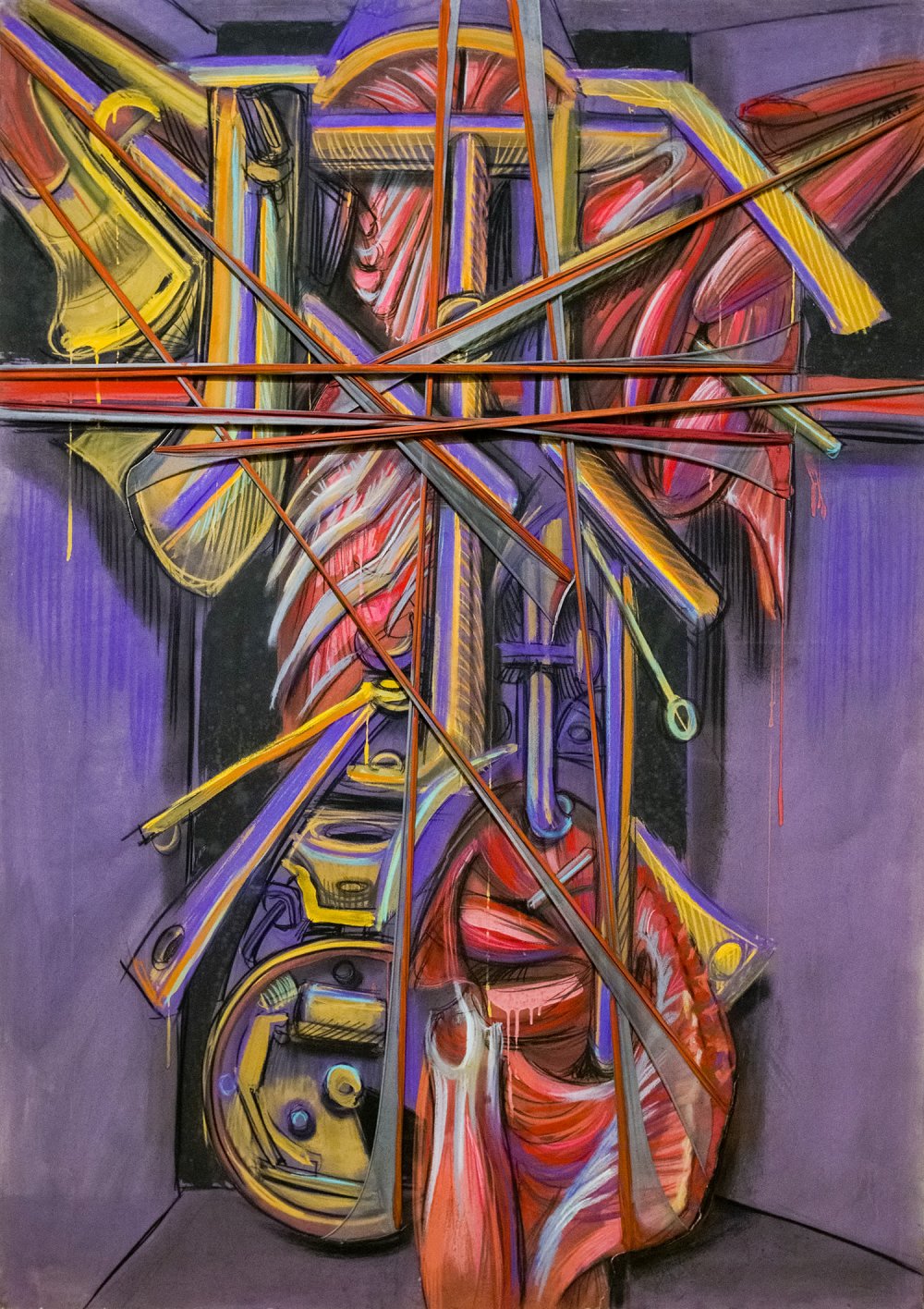 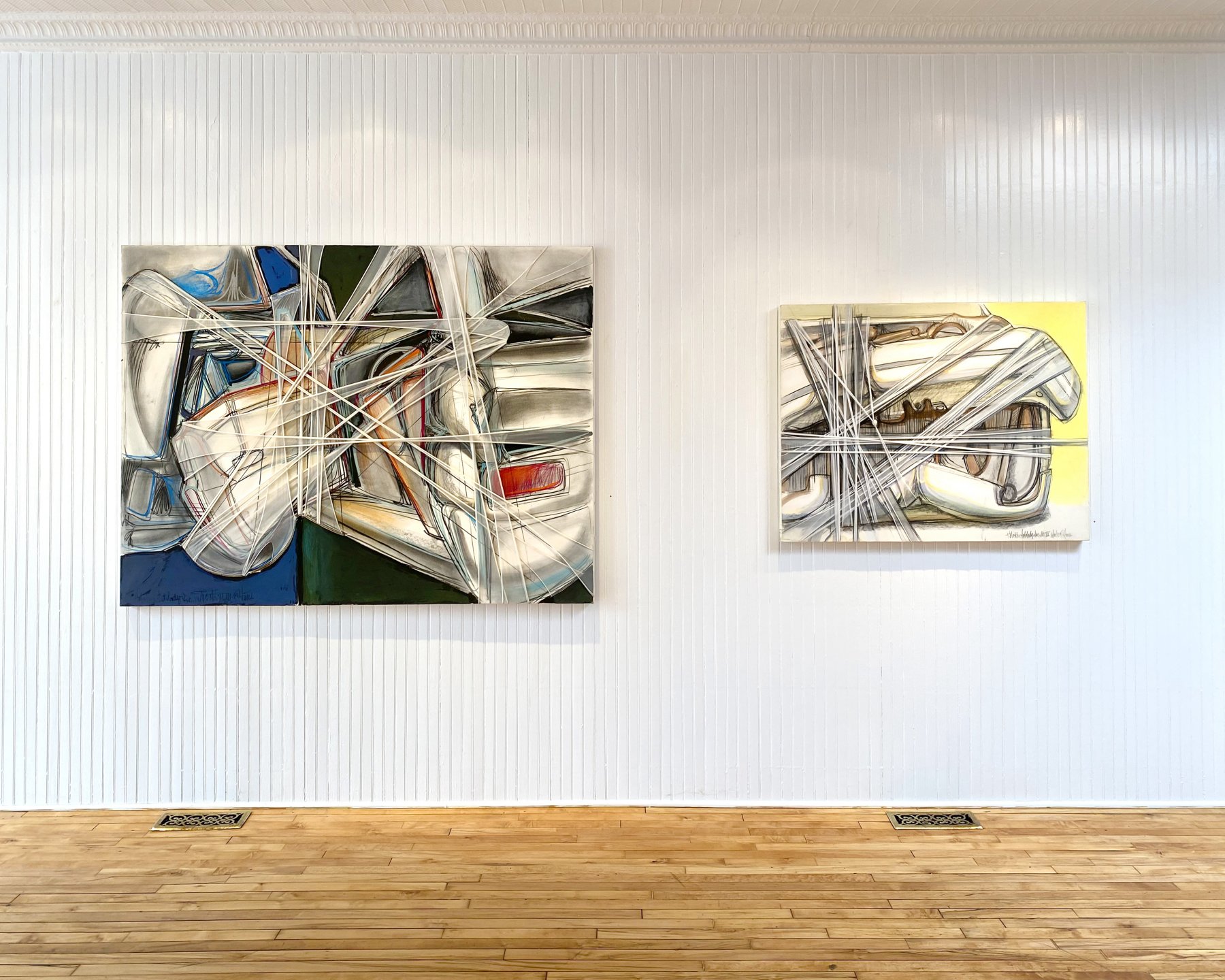 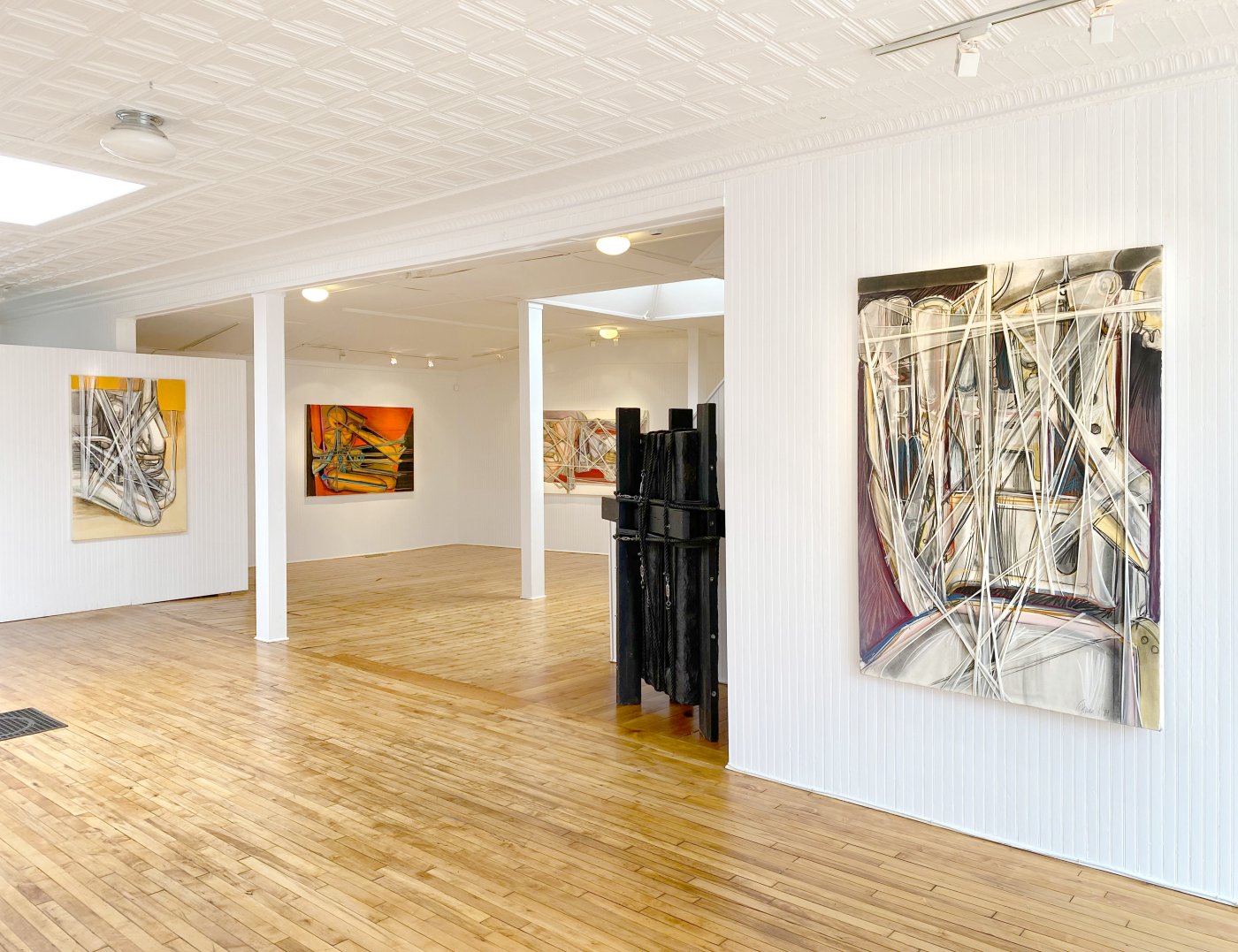 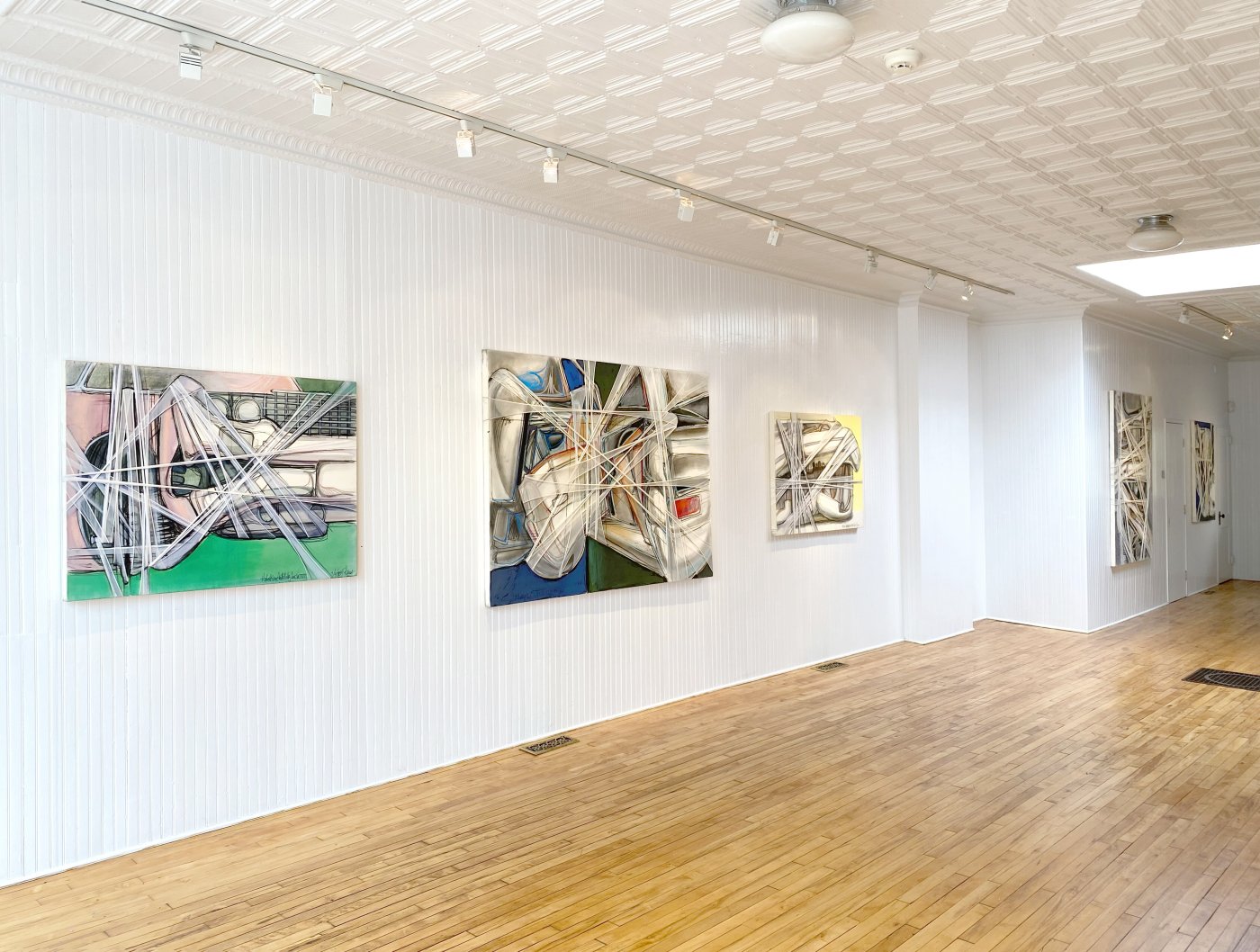 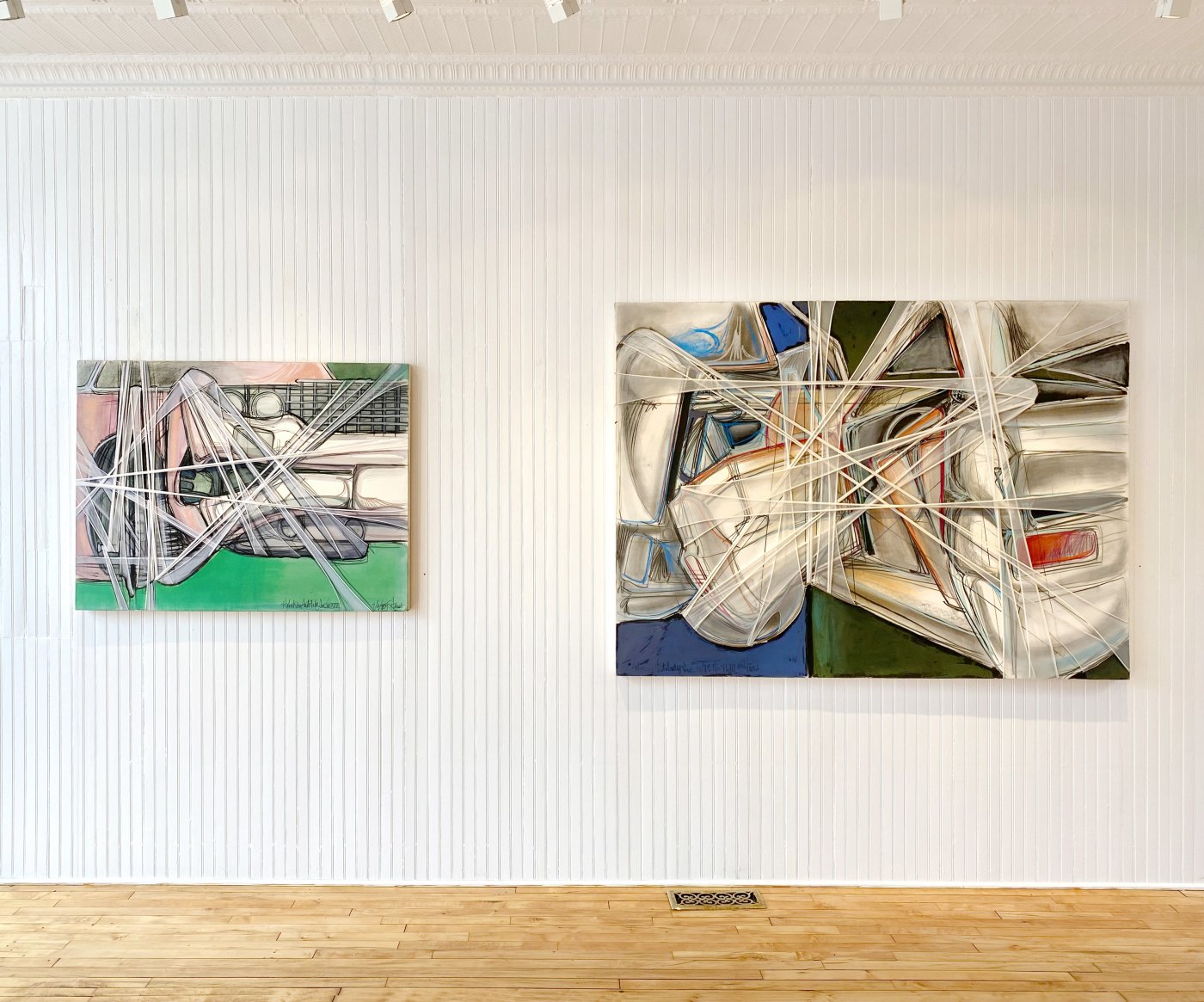 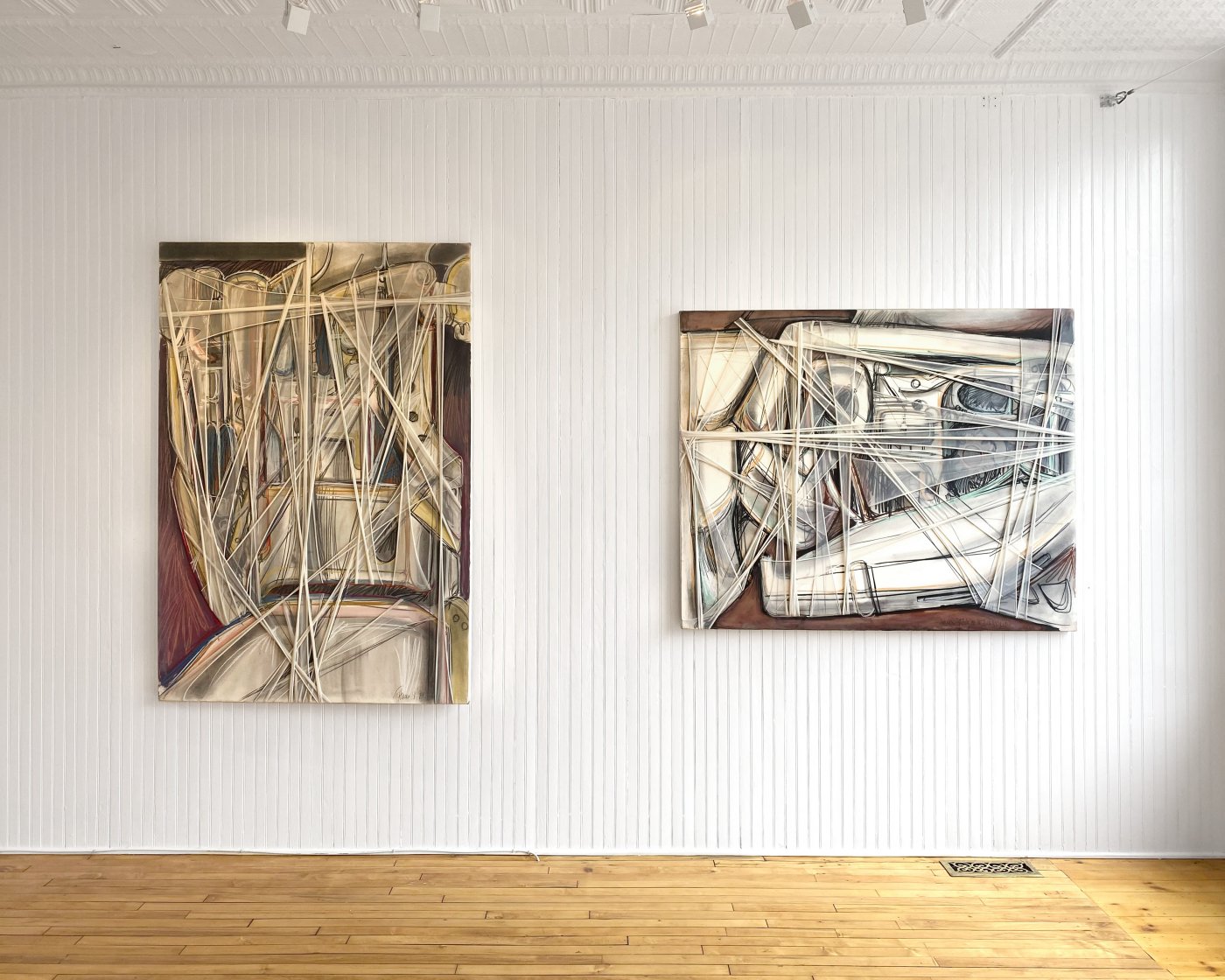 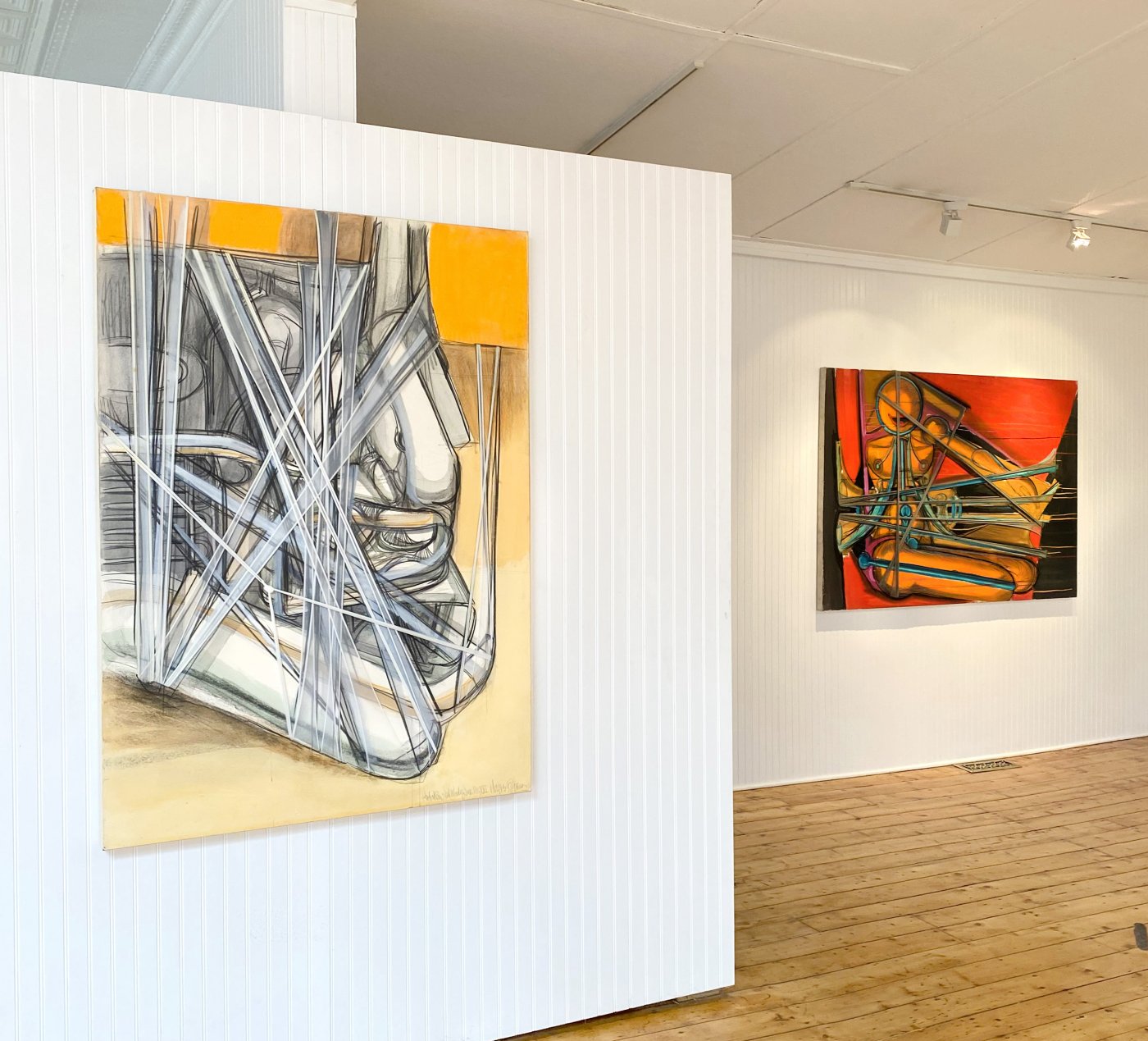 Though his work received critical acclaim during his lifetime, Hines slipped into obscurity toward the end of his life. Fortunately, most of his work was salvaged from a dumpster outside of his barn studio a year after his death. Unwrapping the Mystery of New York’s Wrapper revives Hines’ work and career, positioning him at the forefront of expressionists experimenting with wrapping, and demonstrating his unique vision to imbue his works with a tension and kineticism reflective of the changing world around him. Hines’ paintings will be presented alongside archival material, including photographs and project drawings. The exhibition contextualizes his work in the creative output as a groundbreaking style within the New York art scene of the 1960s through the 1980s. Unwrapping the Mystery of New York’s Wrapper is curated by Paul Efstathiou, Director of Contemporary Art at Hollis Taggart, and Peter Hastings Falk, art historian and publisher, and is on view at Hollis Taggart’s Southport, Connecticut location, with an accompanying focused presentation on view at the gallery’s Chelsea location.

Today, Francis Hines is best known for wrapping the Washington Square Arch in 8,000 yards of white polyester fabric in 1980. Hines was invited to wrap the Arch by New York University, as part of their campaign to raise funds to restore the monument after decades of graffiti blight. Described as “a giant bandage for a wounded monument,” the wrapping was an extraordinary undertaking that involved a team of 23 people stretching and crisscrossing each piece of fabric tightly into a geometric pattern. In 2017, on the 50th anniversary of the “Art in the Parks” program run by New York City’s Parks, Recreation, and Cultural Affairs Agency, Hines’ wrapping of the Arch was chosen as one of the top ten public art installations to have taken place in NYC. As the only artist to ever wrap buildings in Manhattan (he also wrapped two abandoned tenement buildings in the East Village in the late 1970s, among others), it is not surprising that he is most remembered for these large-scale endeavors. Hines’ deep engagement with wrapping is however most pronounced in his paintings, 15 of which, along with 5 large-scale drawings, will be on view at Hollis Taggart Southport. A smaller representative group of paintings and drawings will be on display at the Chelsea gallery. As Hines himself said, “My building wraps are larger forms of what I do in the studio.”

The majority of the works on view in Unwrapping the Mystery of New York’s Wrapper are paintings from three major series. The Hoboken Autobody Series [1983–86] is testament to Hines being the first artist to wrap his paintings. After painting large sheets of Arches paper with hardpoint pastel, he mounted them to a wooden board. That firm support allowed him to anchor his nylon fabric and stretch it tightly across the painting, just as he did in his sculptures. While the final works appear to be born from abstract expressionism, one can discern Hines’ fascination with cars. The artist was inspired by the many cars abandoned after crashes near his Manhattan studio on West Street. He salvaged parts and incorporated them into sculptural works – one of which will be on view in the exhibition – by wrapping them in his signature synthetic fabric. Two other important series of paintings on view are Urban Icons [1986–87] and Mutagenesis [1986–2016], in which Hines explored the convergence of humans and machines, binding abstract corporeal and mechanical images together with synthetic fabric.

Hines’ practice draws comparisons to other artists interested in the aesthetic of wrapping. One of the first artists to wrap an object was Man Ray—who wrapped a sewing machine in a blanket and twine in 1920, titling it L’Enigme d’Isidore Ducasse—followed by other Dadaists and surrealists who also wrapped objects, adding mystery and intrigue to everyday things by obscuring them. The trajectory of wrapping culminates with Christo and Jeanne-Claude, who wrapped many objects—from a motorcycle to a tree—before wrapping famous buildings around the world, from the Reichstag in Berlin in 1995, to L’Arc de Triomphe, which was wrapped posthumously last year based on the artists’ concept drawings. While these artists had a conceptual interest in wrapping forms, Hines’ pursuit was primarily aesthetic. Interviews with Hines demonstrate that he was focused on the tension produced by wrapping as well as the kineticism introduced to sculpture and painting when it was covered by carefully positioned, taut, diaphanous swathes of fabric. In his words, Hines was “interested in the enormous energy that takes place when these forms are under the tension of binding.”

Born in Washington, DC, in 1920, Hines attended the Cleveland School of Art (now the Cleveland Institute of Art) before serving in the U.S. Army Corps of Engineers during World War II. Following the war, Hines settled in New York City, working as a commercial illustrator in addition to pursuing painting as a hobby. In the 1950s, he held the position of chief commercial artist at G. Fox & Co, one of the largest private department stories in the country at the time. In the 1960s, his personal artistic practice started to receive attention, and in 1965, he had his first solo exhibition at the Smolin Gallery, an avant-garde art venue on 57th Street. Around this time, Hines moved to Watertown, Connecticut, where he converted a barn into a large studio where he worked on his personal artistic projects until his death. Despite the fact that his wrapped sculptures were shown at the Stewart Neill Gallery in SoHo multiple times in the 1970s and his subsequent representation by the Vorpal Gallery in SoHo from 1984 until the gallery’s closing in 1997, Hines’ work largely fell out of public view after the turn of the century, though he continued an active practice in his Connecticut studio.

Following his death in 2016, Hines’ house and barn studio were cleared and the contents were placed into dumpsters. A car mechanic named Jared Whipple was alerted by a friend to of these dumpsters and was intrigued by the work. When he entered the barn and saw what remained of Hines’ studio, Whipple decided to salvage the work that had not yet been destroyed and embarked on a mission to piece together the artist’s story. In 2018, having learned as much as he could about Hines, Whipple contacted Peter Falk, an art historian with an expertise in rediscovering significant American artists who have been forgotten over time. Falk then worked with Hollis Taggart and his team to organize Unwrapping the Mystery of New York’s Wrapper.

“As a gallerist, I am particularly interested in presenting the work of artists who have been left out of mainstream art history, whether it be by active omission or by chance,” said Hollis Taggart. “It is extremely rare to come across so many works by a largely forgotten artist. We’re excited by the opportunity to show and study so much of Hines’ oeuvre and to consider how his work might fit into the history of American art movements like Abstract Expressionism and alongside artists exploring similar techniques or themes like Christo or John Chamberlain.”