Francesca Mollett: The Moth in the Moss

Francesca Mollett: The Moth in the Moss

1 Lonsdale Road, W11 2BY Francesca Mollett: The Moth in the Moss

Taymour Grahne Projects presents The Moth in the Moss, a solo exhibition by London-based artist Francesca Mollett. Accompanying the show is a commissioned text by the writer and poet Vanessa Onwuemezi made in response to the artworks. ‘So Waiting for Union’ appears in the form of a pamphlet and a recording. 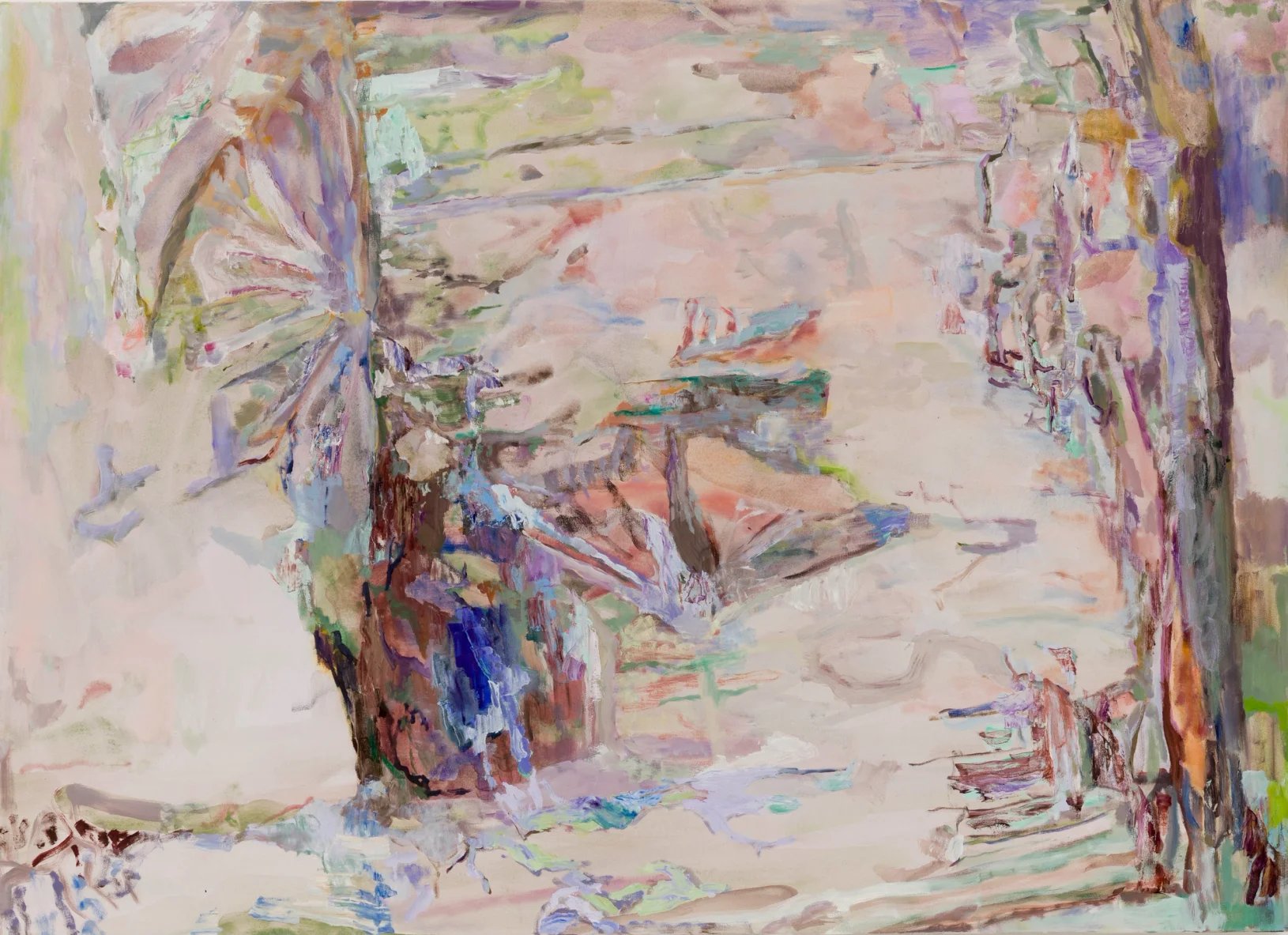 The Moth in the Moss by Bryony Bodimeade

Slipping between divergent qualities of painterly touch, from wateriness to thick spreads of palette knife, on surfaces large and small, Francesca Mollett creates both expansiveness and intimacy. Translucent, dusty and viscose, the membrane-like layers of her paintings evolve through a long process. Initial fluid structures are gradually altered to find textural presences, made of precise accumulations and subtle removals. Found and personal photographs influence the starting points, from which she creates charcoal drawings to contact the image and interpret how it can evolve into the abstract material language of paint. The title, The Moth in the Moss, a kind of fiction, posits the subject of this body of work within a spreading surface-space. Crystalline scales of moths’ wings on slithers of bark, and the green-gold glow of luminous moss, contain possibilities of colour and light that Mollett can touch upon, then grow. By revealing elements of the visual material through the title, Mollett invites the viewer to witness transformation and opens the way for further interpretations.

The Tissue moth flies to recesses of caves to seek shelter among dark cool rocks, its journey making a connection with moss through site. Nicknamed Goblin’s Gold, phosphorescent moss grows from indirect, minimal light, such as reflections of light on water, and creates unearthly, fluorescent glimmers. Filaments search for light spots and protonema develop lens-like cells, multiple eyes, in which chloroplasts move around to receive the maximum light available, resulting in refraction mixing with unabsorbed green light. The two figures of moth and moss, connected by their ways of processing light to produce luminosity, form a crossing: a clearing and a darkening. The small paintings on the lower floor of the gallery, made on pigmented grounds evocative of inner light, intertwine the phenomena of saturation, illumination, and environmental exchange, with an exploration of bodily dissolution.

The modes of imaging and naming based on the habits, location and aesthetic associations of moths, bear some relationship to how we relate to images or things within the world – to how abstraction can move beyond lingual limitations. The patterning of a moth’s wing may be important for classification, but Mollett dissolves these patterns so that they become unnameable and move into new perceptual territories. A specificity is retained, but of a different kind than that of the collecting gaze. The paintings’ continual traversing between inner and outer frays at the marginal fringes of form, uncovering the strangeness of attempts to draw a line around a thing or a being, the strangeness of an outline or a name. Instead, Mollett’s work offers, in the struggle and pleasure of looking, an encounter of desire and shedding, which draws towards and lets things fall away.

Francesca Mollett (b. 1991, Bristol) lives and works in London. Mollett graduated with an MA in Painting from the Royal College of Art, London in 2020, and previously studied at The Royal Drawing School (2015) and Wimbledon College of Arts (2014). Her solo exhibition Spiral Walking recently opened in Los Angeles at Baert Gallery and she will be exhibiting in a group show of British painters curated by Tom Morton in The Kingfisher’s Wing at Grimm Gallery, New York. Recent exhibitions include: What Now?, PM/AM, London (2022), Ode to Orlando, Pi Artworks, London (2022); Le Coeur Encore, The Approach, London (2021); Down in Albion, L.U.P.O., Milan (2021), Wild Shade, Informality Gallery (2021, solo); Diaries of a Climate, Baert Gallery, Los Angeles (2021); London Grads Now, Saatchi Gallery, London (2020); Sympathetic Magic, ZONA MISTA, London (2019); and Keyholes at Brockley Gardens, London (2019, solo).