The exhibition Four Rooms: A Floating World brings together four positions by four artists from the gallery in four rooms. The show is very diverse both thematically and technically: it takes into account all the artistic processes like painting, drawing, installation, sculpture and printmaking and addresses different issues. 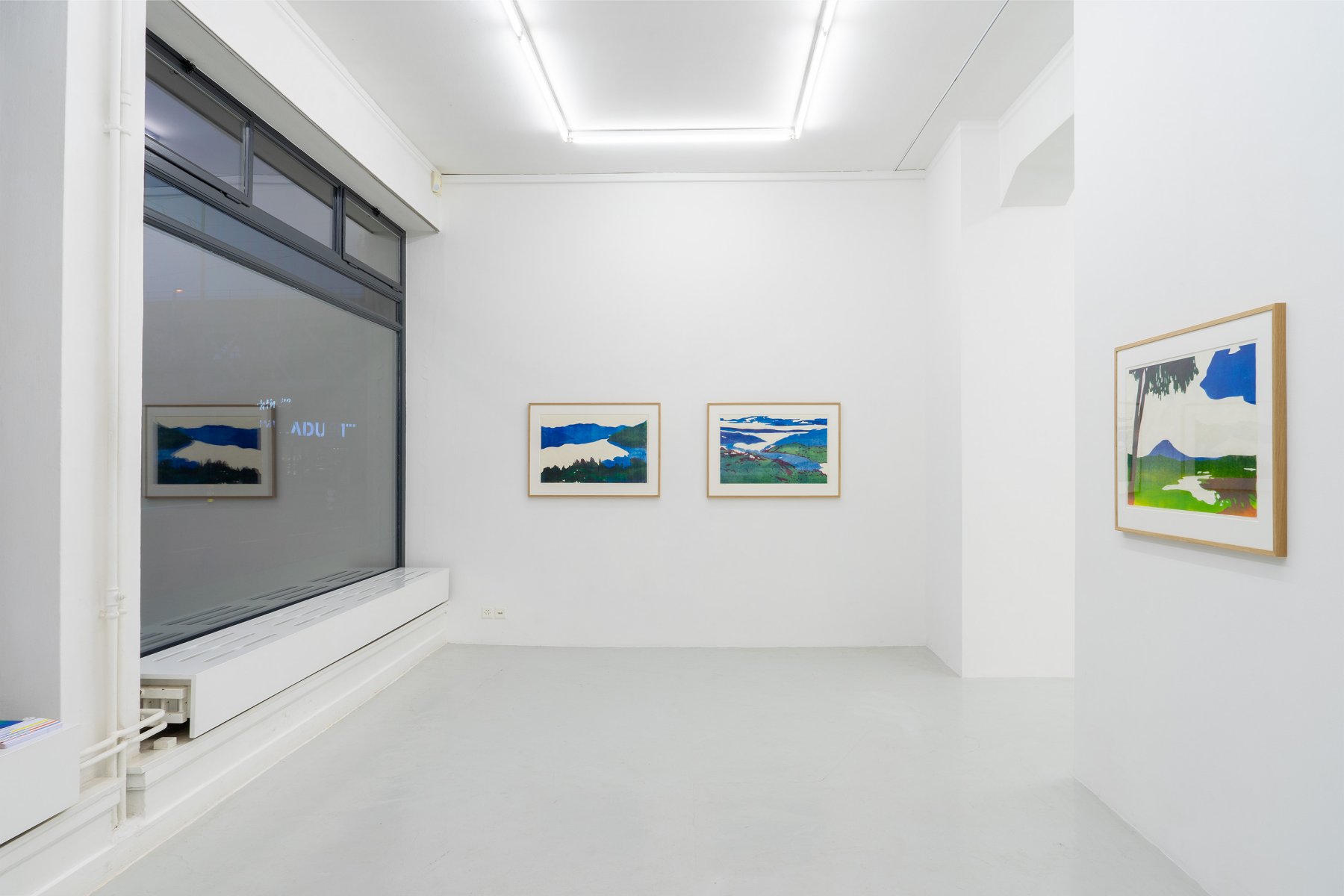 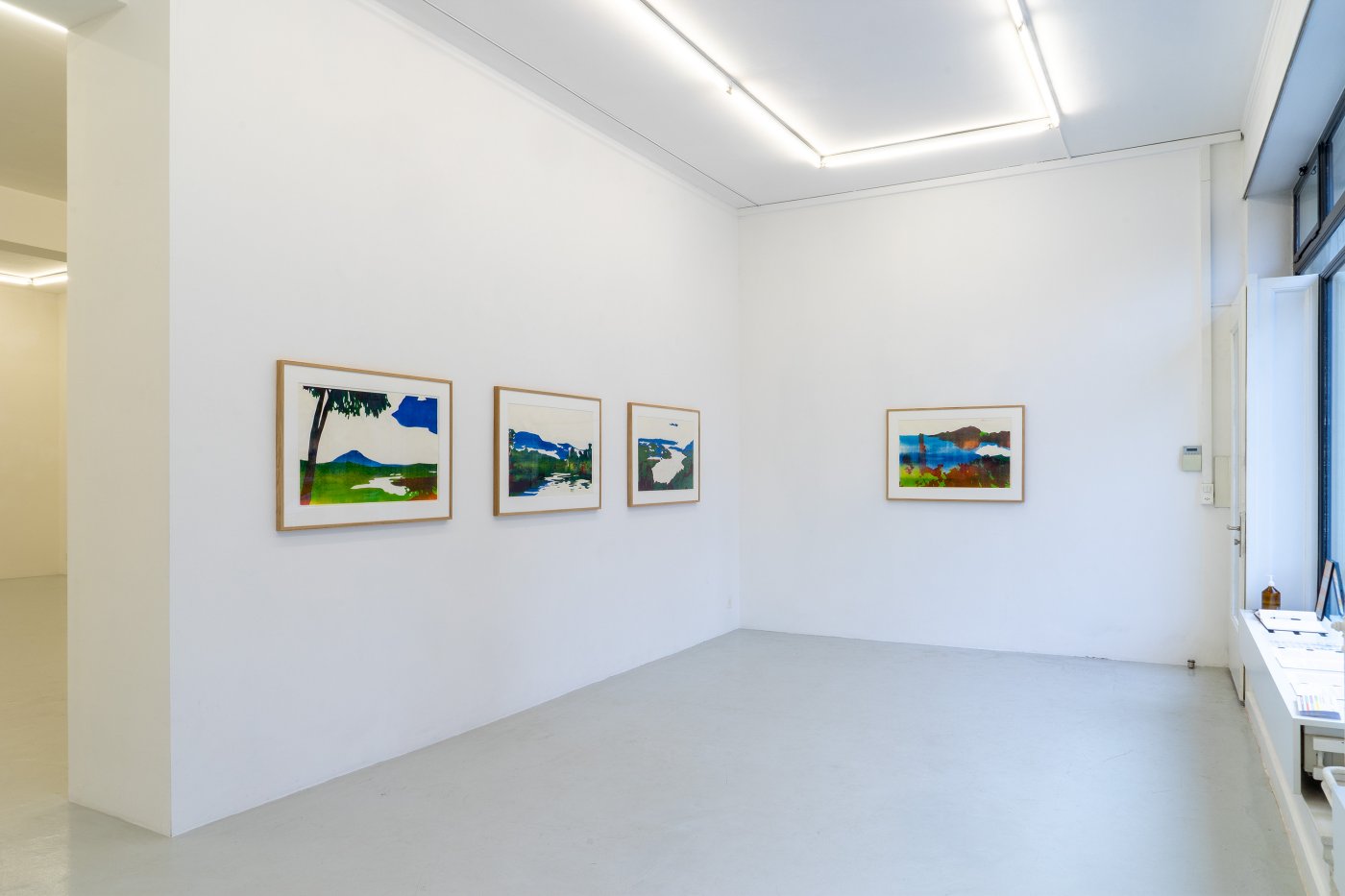 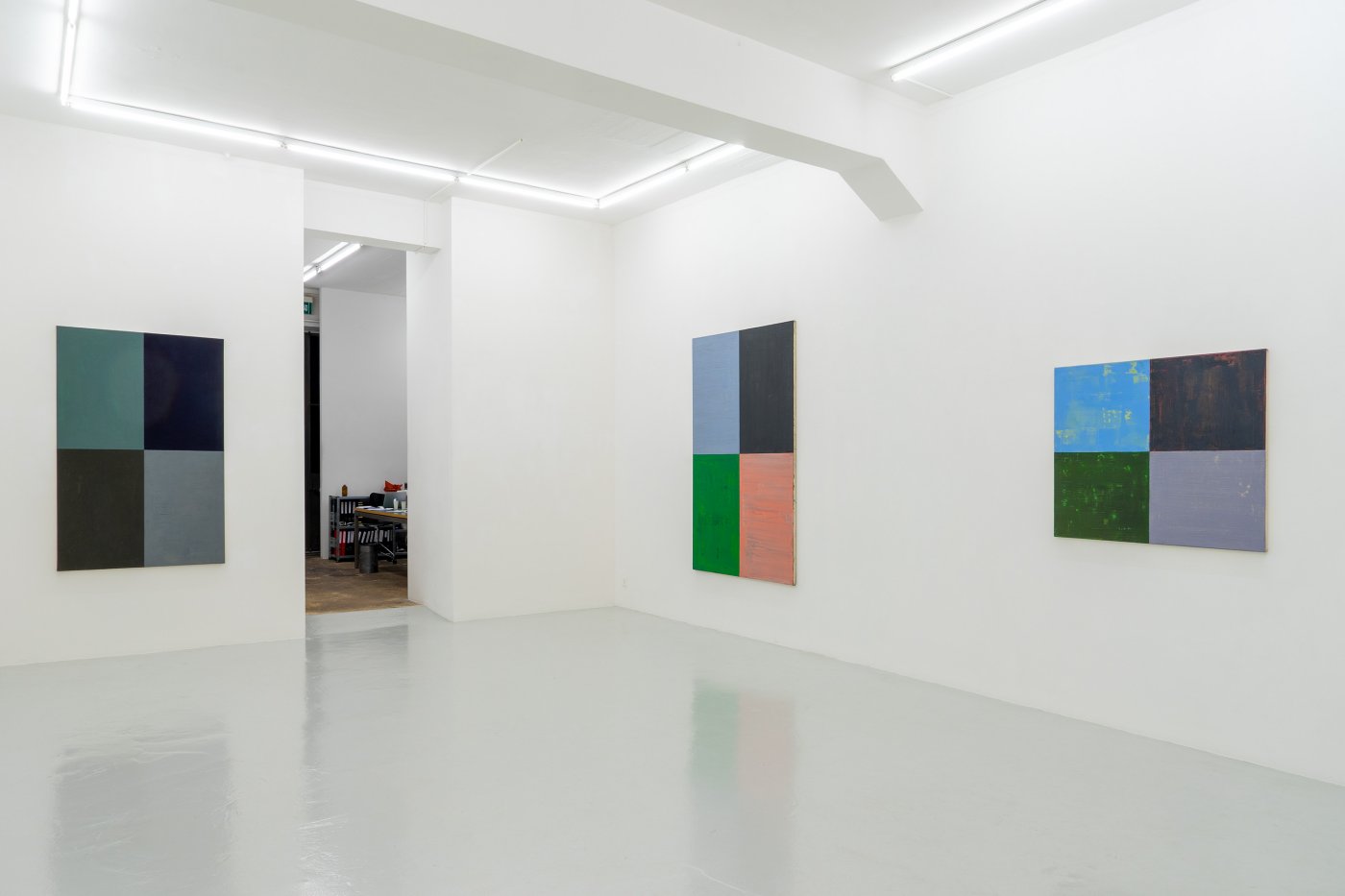 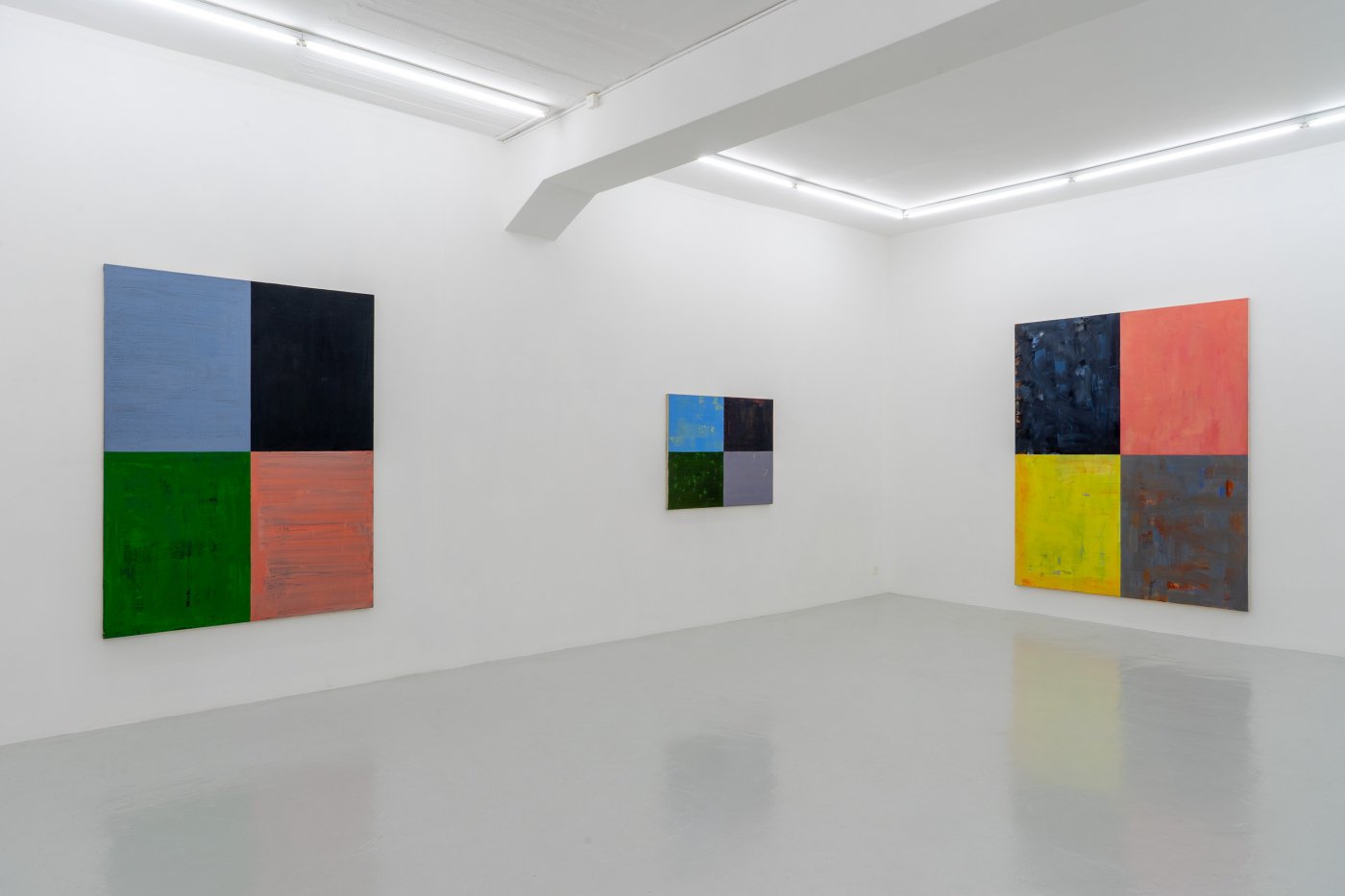 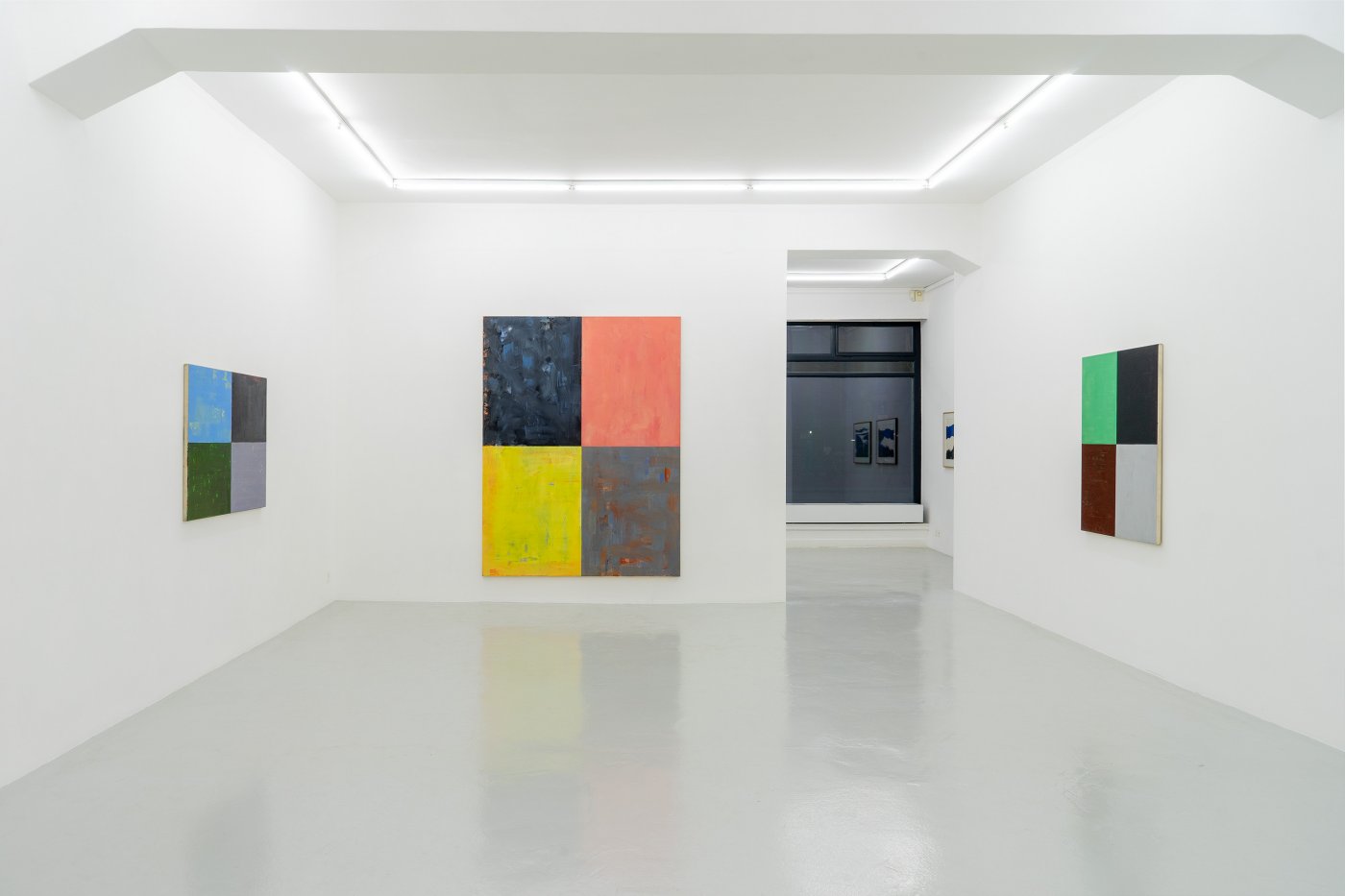 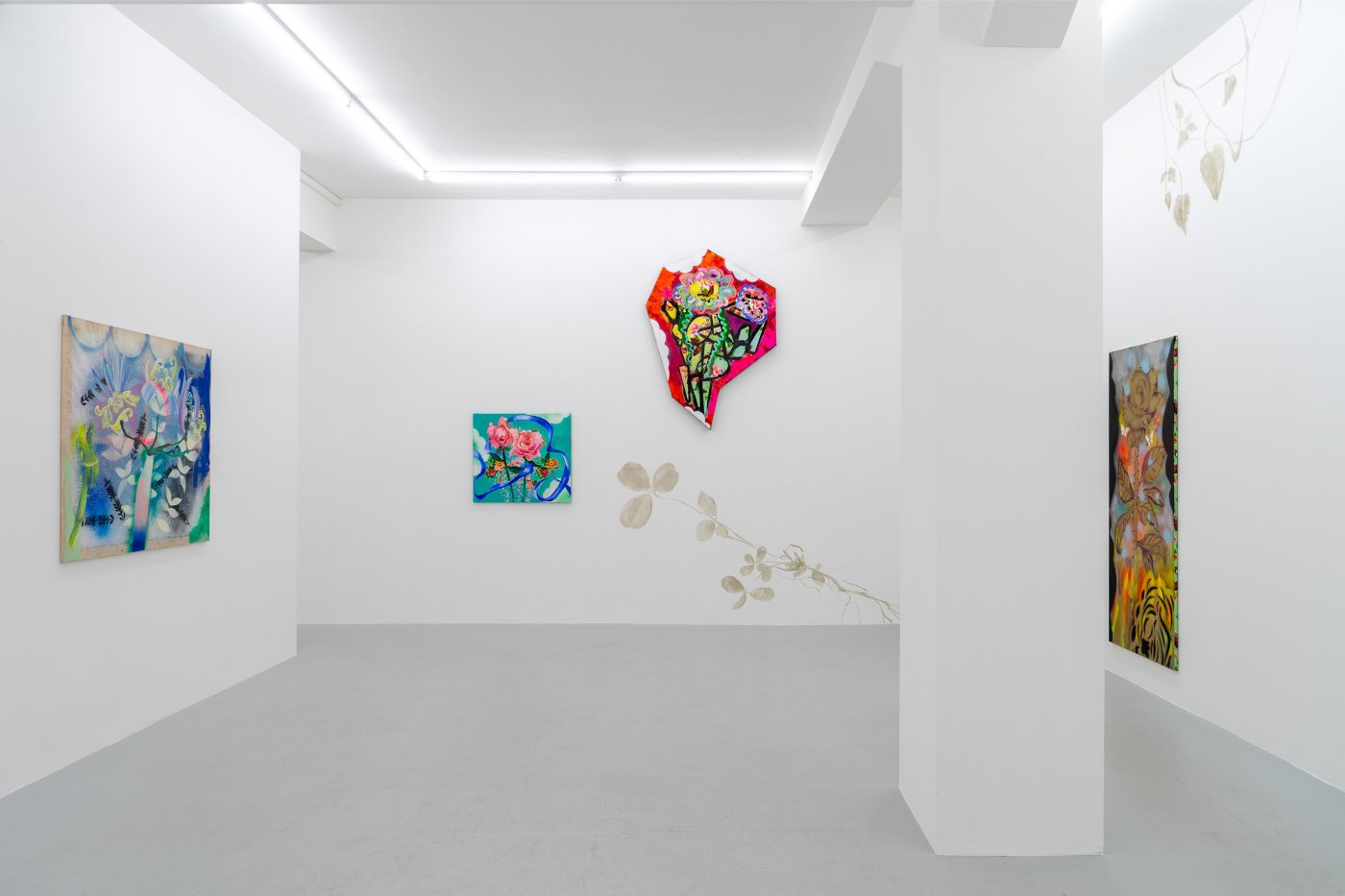 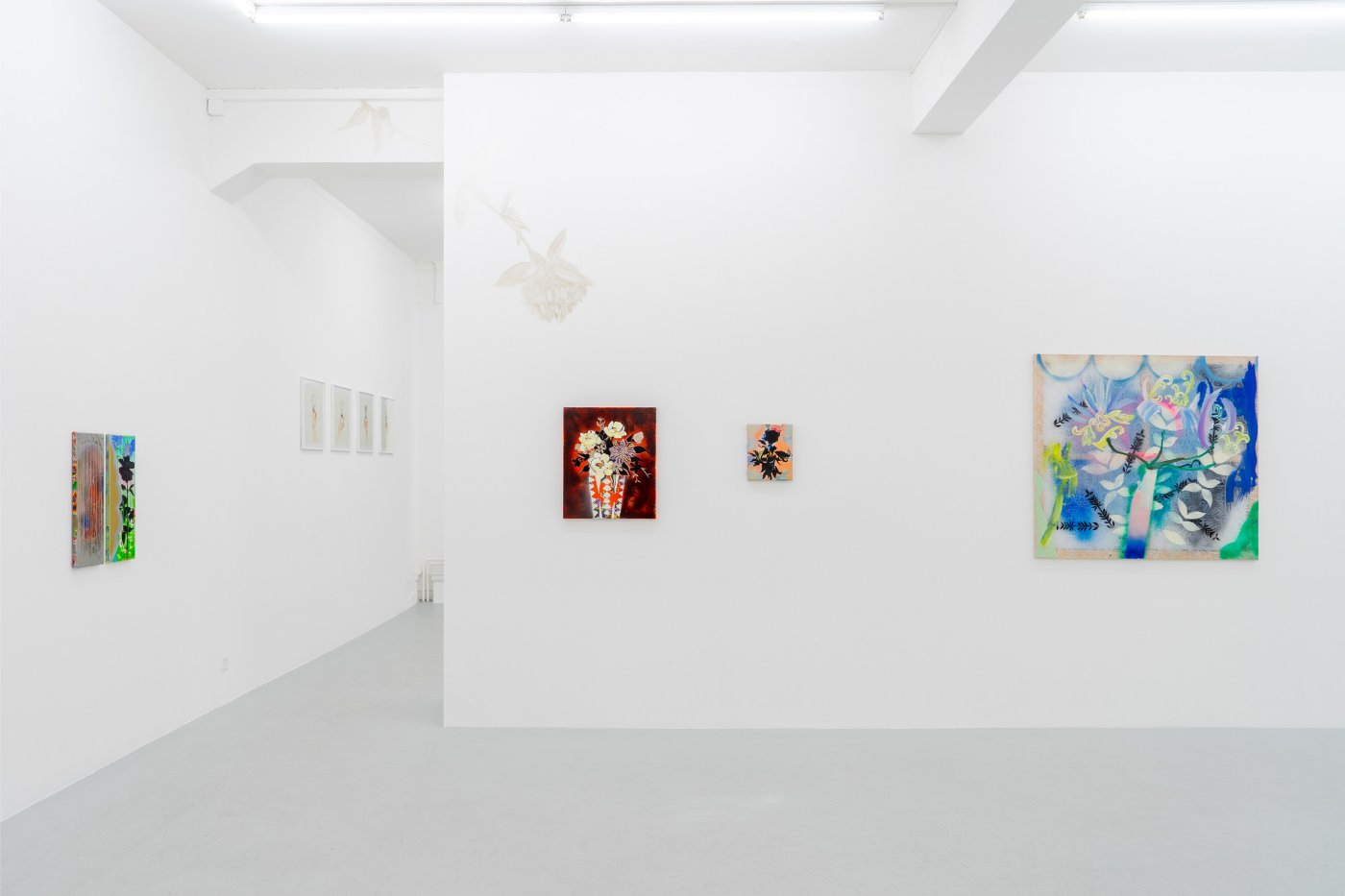 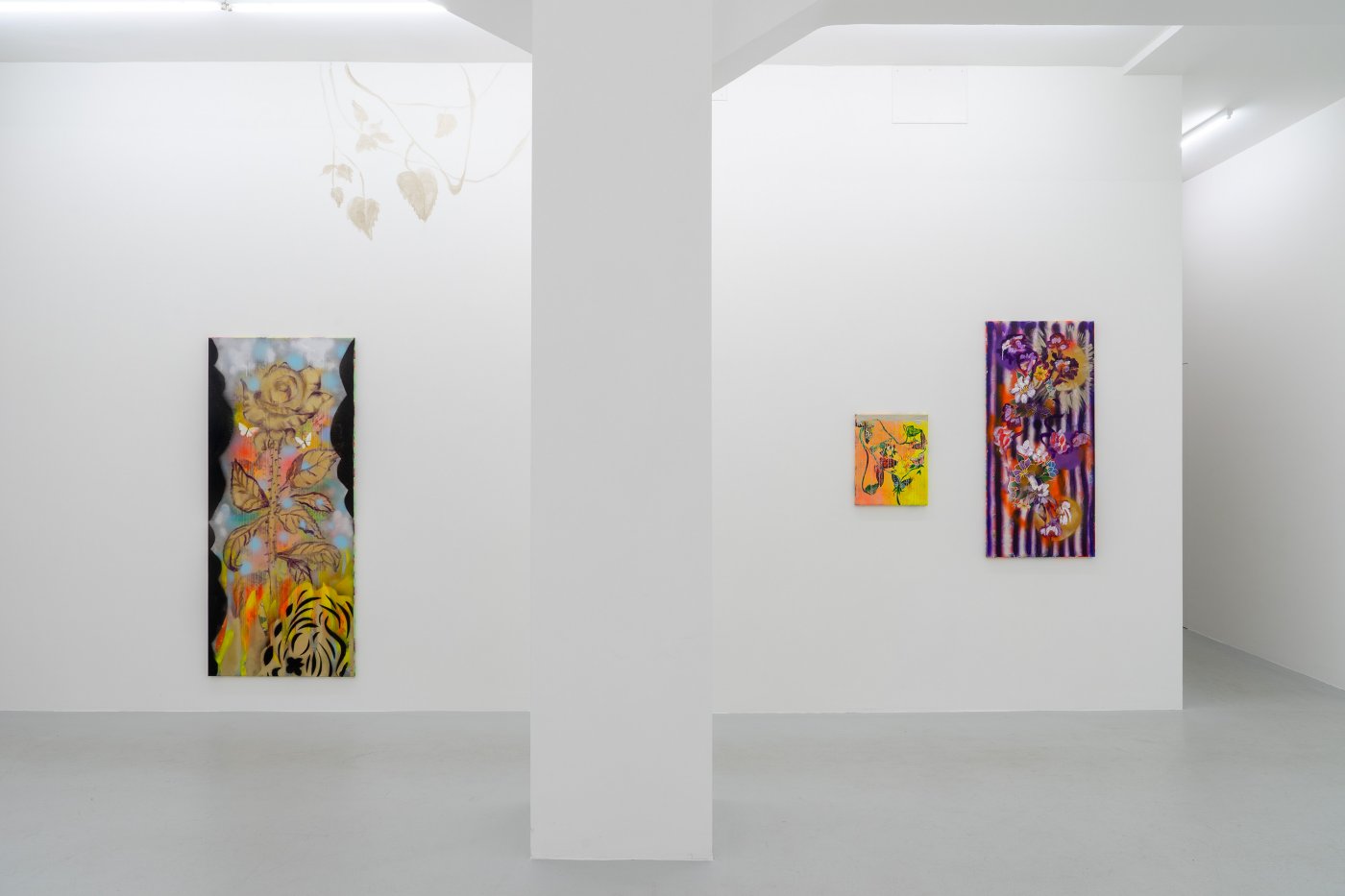 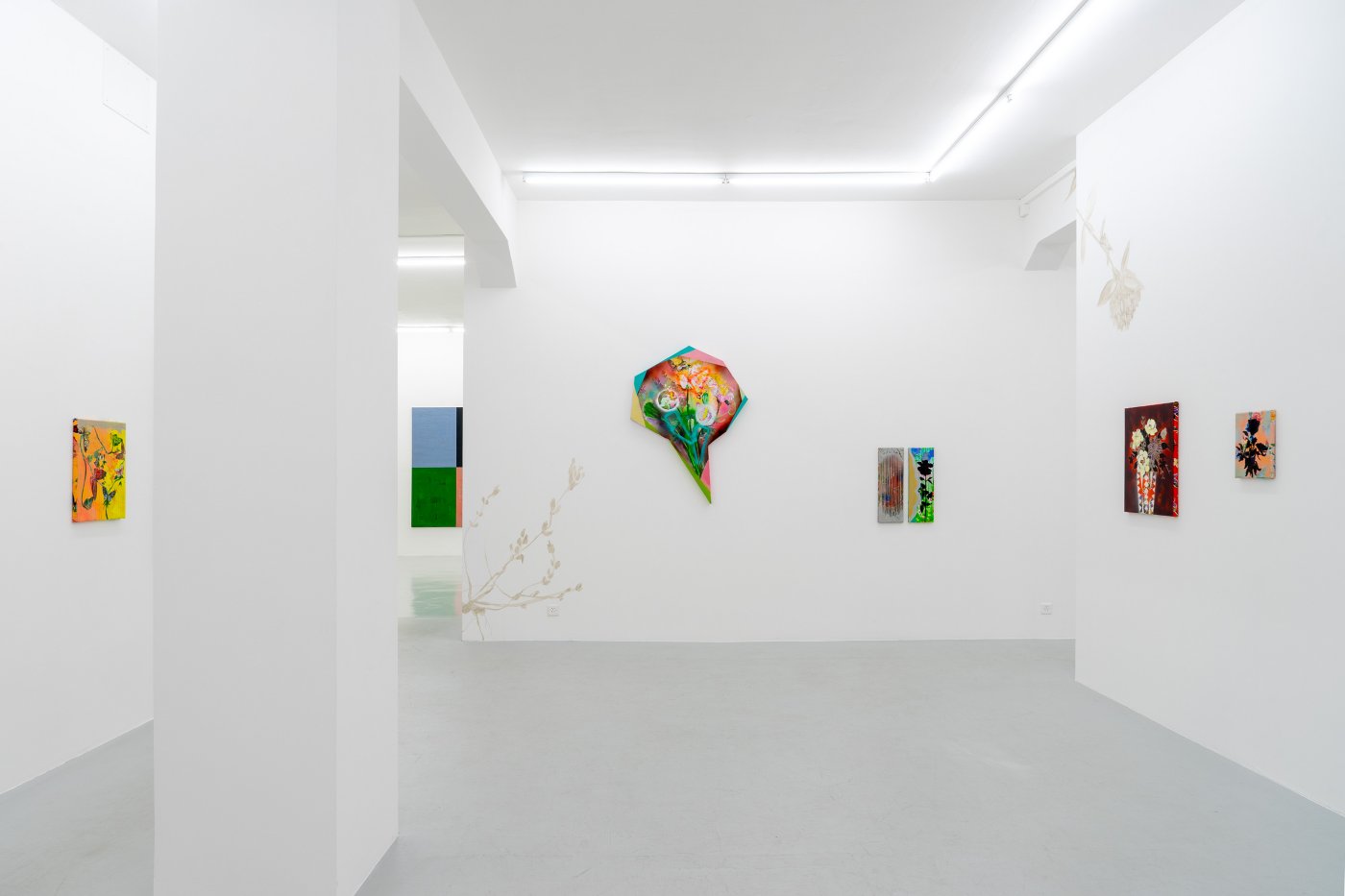 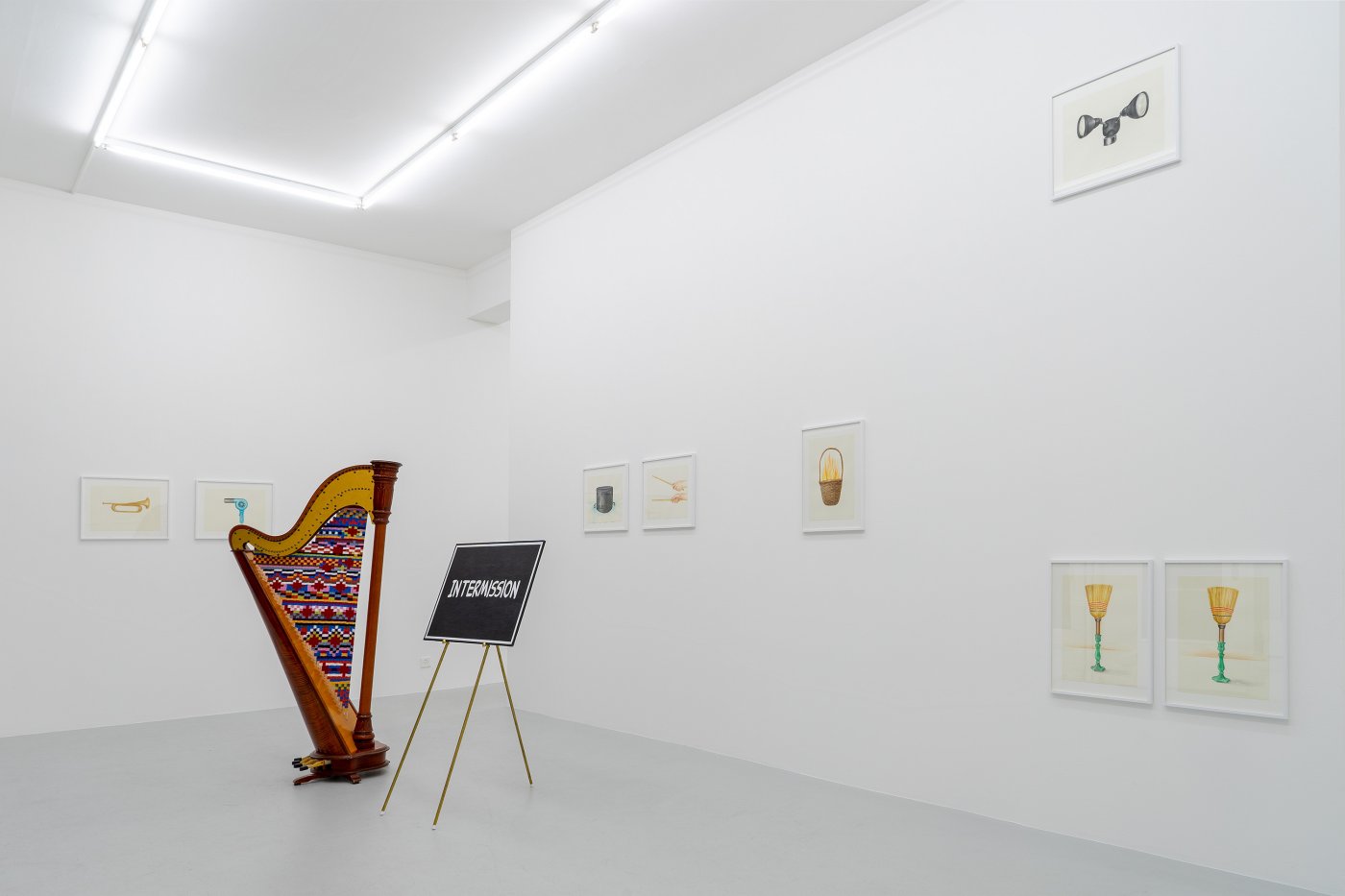 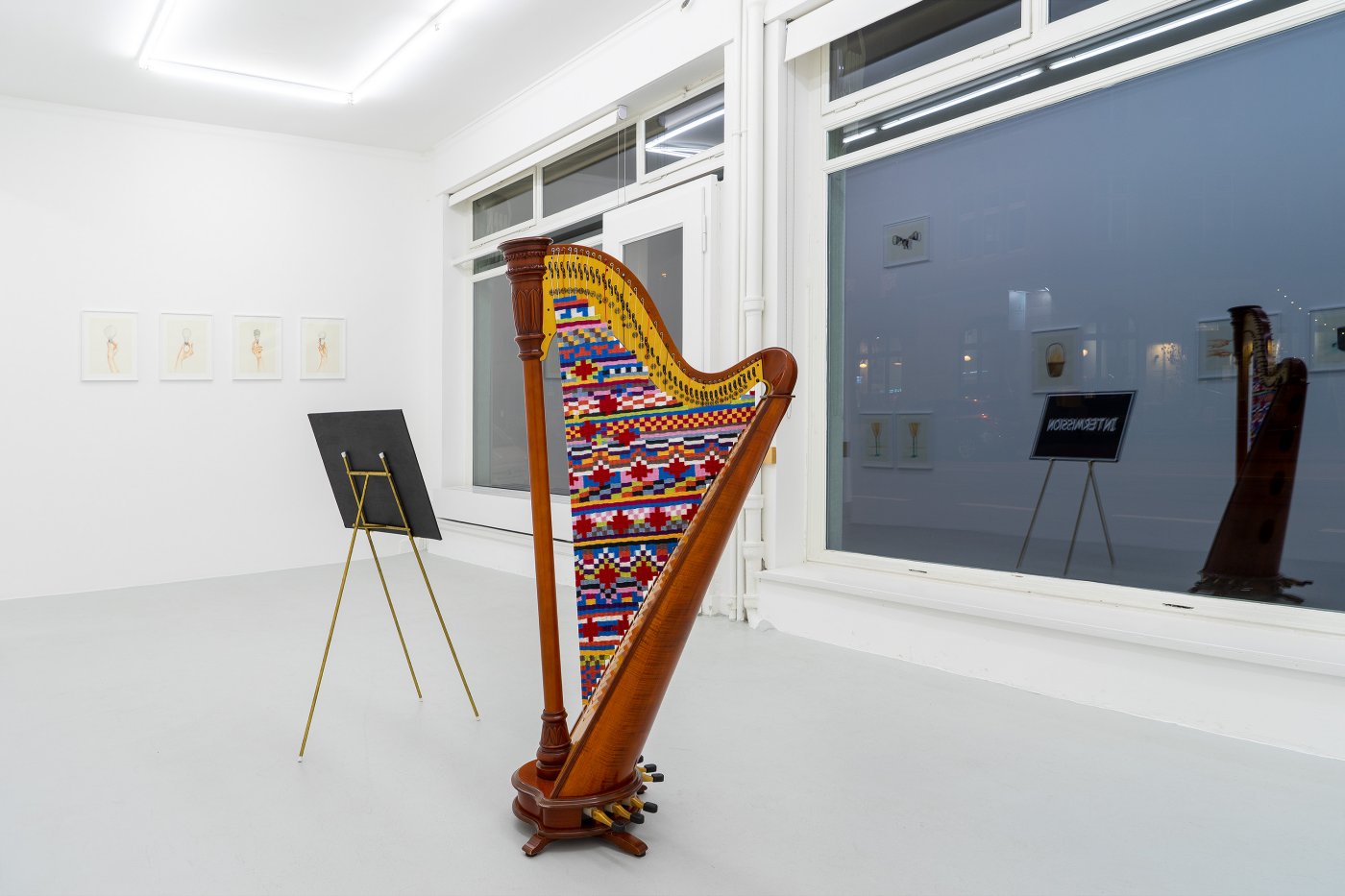 In the first room, Sebastian Utzni shows new woodcuts that follow the tradition of landscape depictions in Japanese woodcuts in the 18th and 19th centuries. The six large-format prints depict landscapes, some of which appear familiar at first glance – but the impression is deceptive. As the title Conflict Landscapes suggests, the idyllic mountain and river landscapes have another dimension. The series shows places where ores are mined that are needed in our society for the production of electrical appliances, especially computers and mobile phones. In many cases, the production and mining of these substances takes place illegally and outside of state control. Human rights violations are often accepted for the extraction of the disputed substances. The global extraction of cassiterite, coltan, gold and wolframite in particular takes place in conflict regions, which is why these raw materials are also referred to as conflict materials. Areas where the control of these resources is a central element of power are mainly the eastern Congo (North Kivu, South Kivu) and the bordering countries Rwanda, Uganda and Burundi. The Conflict Landscapes series shows views around Lake Kivu where conflict materials are mined. The templates for the woodcuts come from the digital world of the internet. They are printed in the spectrum CMY (without K), which is standard in digital print production, but were elaborately handmade and printed on Japanese paper according to ancient tradition. The graphics of the beautiful, seemingly untouched landscapes draw attention to our society’s consumption of resources and thereby thematize the global interconnections and dependencies.

In the second room, Pierre Haubensak shows pictures from the Tetras series. He began this series in 1988 and continued it until 2008. In the canvases, each divided into four rectangles of equal size, Pierre Haubensak explores the possibilities of painting. By dividing the canvas into four color fields, he takes aim at his work. It is important that the chiaroscuro gradation is always diagonally offset, as this gives the paintings a twisting effect similar to that of a windmill. Pierre Haubensak achieves depth effects through the choice of colors and the facture of the application in the respective fields. In the Tetras, he creates completely different moods solely through the choice and application of color. Open, glazed areas of color that reveal the undercolor alternate with almost opaque, dense surfaces, whereby he does not allow completely closed surfaces to come up against open forms, but always strives for a balanced color composition. Pierre Haubensak’s choice of color and style betrays his strong affinity with the European painting tradition, from Courbet’s earthy ochre tones to Monet’s delicate pink tones over Corot’s blue. He is an eminent European painter whose pictures open up worlds.

Klodin Erb exhibits the new group of works Flowers for Sale in the third room. These are intriguing flower paintings that only reveal themselves to the public when viewed closely and allude to the selling off of nature. The pictures were all created on plasticized tablecloths, whose motifs Klodin Erb artfully continued, altered or added new elements to. She reworked the printed patterns to varying degrees. In some pictures, the floral background is hardly recognizable anymore, so the pattern has been overpainted and changed; in others, the printed colors and drawings are clearer and an essential part of the pictorial inventions. Klodin Erb deals with these different levels of reality – the artificial printed plastic ground and her own subtle painterly settings – in a sovereign manner. She traverses the different levels of reality with a sure conviction. This impression of a world in floating appearance is reinforced by Klodin Erb’s chosen arrangement of the individual paintings on different hanging heights, held together by a silvery iridescent wall painting with further floral motifs. Nature is the overarching theme. Both in the choice of motifs and in the painterly style, cross-references can be made to her earlier groups of works. As always, painting is put to the test in her work: Klodin Erb finds a form in which painting, in this case the burdened genre of the flower painting, can assert itself in the digital present.

In the fourth room, Jamie Isenstein has fitted an interior with surrealist elements. The central work in the room is a harp, in which she wove a pattern into the strings in a performance during Art Basel in June 2011. “I imagine the harp as a loom with a rug woven into it, so that the harp does not produce a sound, but loses its sound as I “play” (weave) it”. The title Rug Woogie IV refers to the Mondrian painting Broadway Boogie Woogie – an image that alludes to the street grid in New York City and traffic as boogie woogie, which is of course a type of dance and music. “In my title, I used the word “woogie” to refer both to my performance, where I made the harp as a kind of boogie woogie dance, and ironically to the fact that it’s now a silent harp, not a musical one.” Within the performance, when not weaving on the harp, she put up the sign, Intermission. The harp is complemented with delicate watercolors that surreally refer to things of everyday domestic life and to music, and are seen by the US artist as an allegory of her country in the aftermath. Four depictions of hands holding different light bulbs remind the artist of the Statue of Liberty’s hand holding the torch. The drawing of hands with drumsticks is paired with a pot because both elements evoke domestic and musical associations. Furthermore, the homemade drum reminds Jamie Isenstein of the protests in America as the country has become increasingly divided and politics has infiltrated into the homes and domestic sphere of everyday Americans.
A black motion detector hung high reminds us of constant surveillance, and the fire basket is another allegorical portrait of the USA. A blue hairdryer and a trumpet form a pair pointing towards each other, as if both sources of noise wanted to drown each other out. Two brooms stuck in candlesticks complete the group of drawings. Their inspiration comes from the The Wizard of Oz movie where the witch uses her broom to set the scarecrow on fire, but in the end it is the reason for why Dorothy kills her with a bucket of water, so here with the brooms as candles, the threat of fire is contained).

The exhibition in the four rooms asks the public to question their viewing habits and preconceived notions in a fluid world. Each of the four rooms sets different accents, including political ones, by means of the works on display and opens up different worlds for viewers to discover.

Courtesy of the artists and Lullin + Ferrari, Zürich