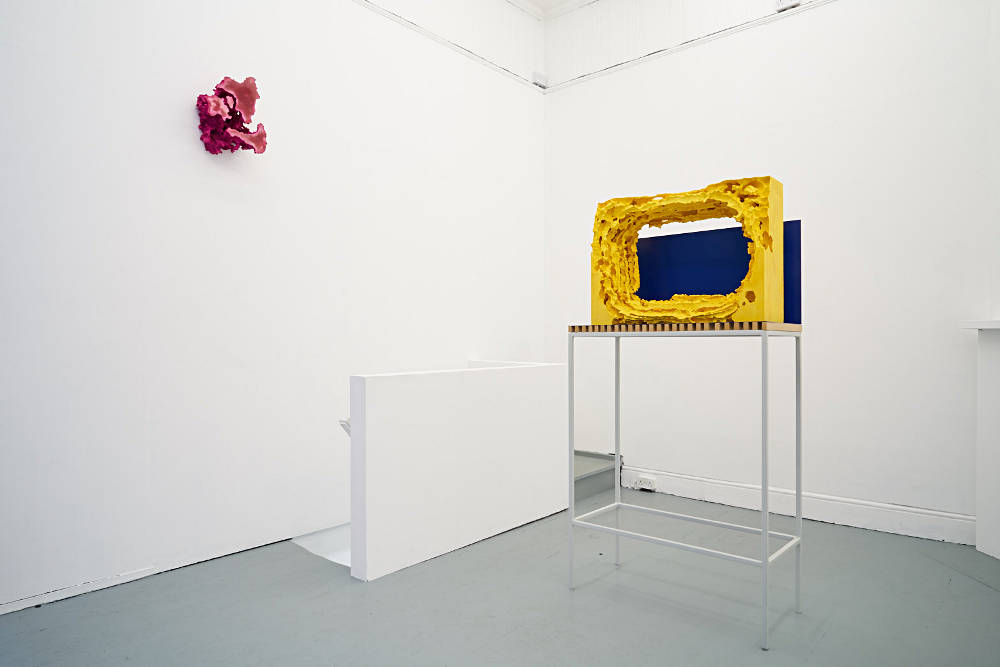 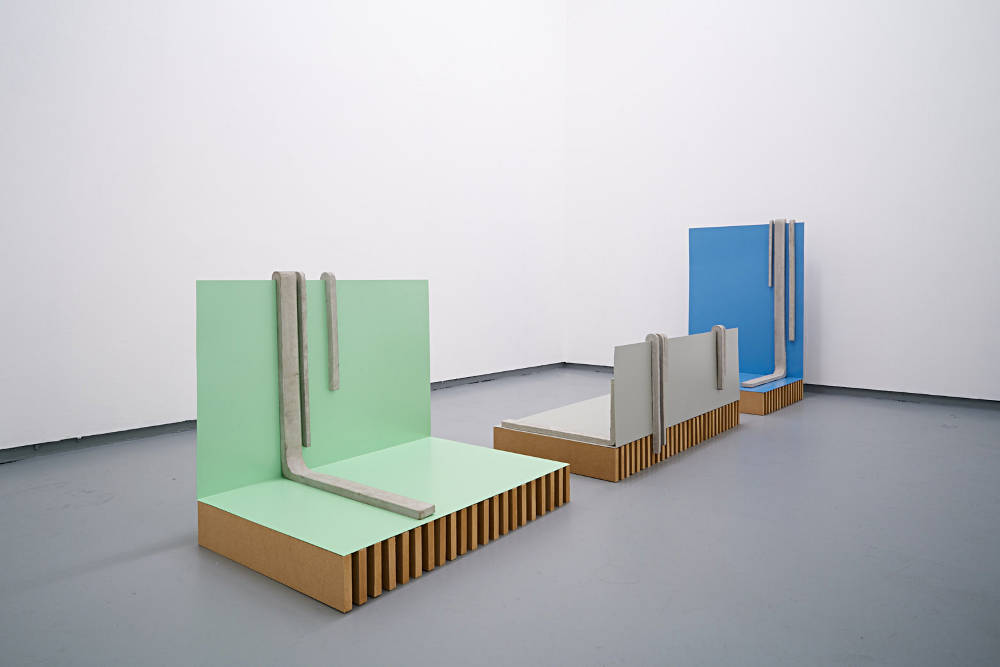 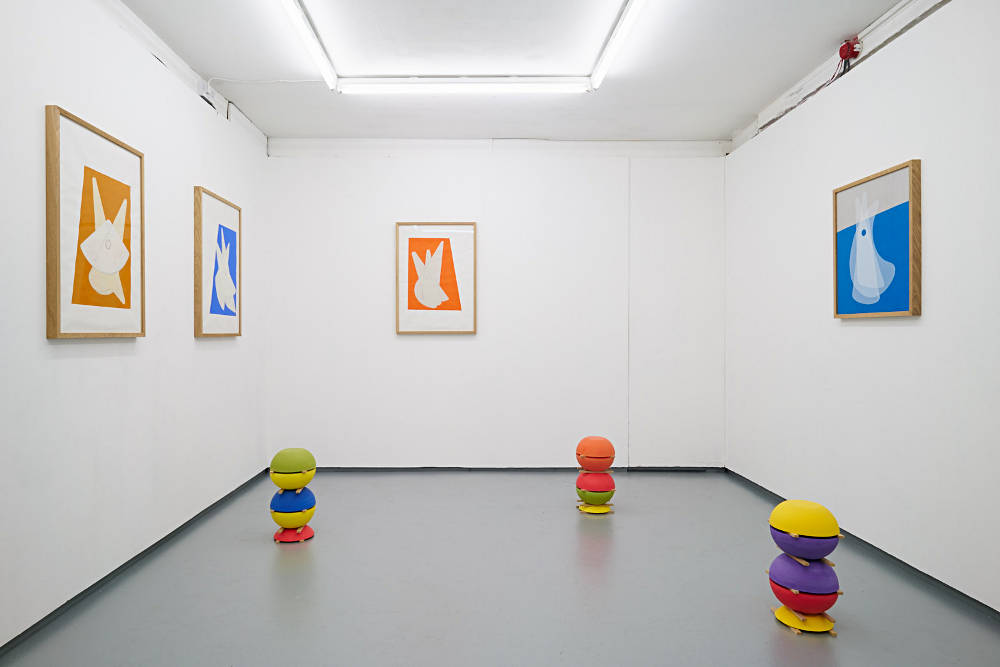 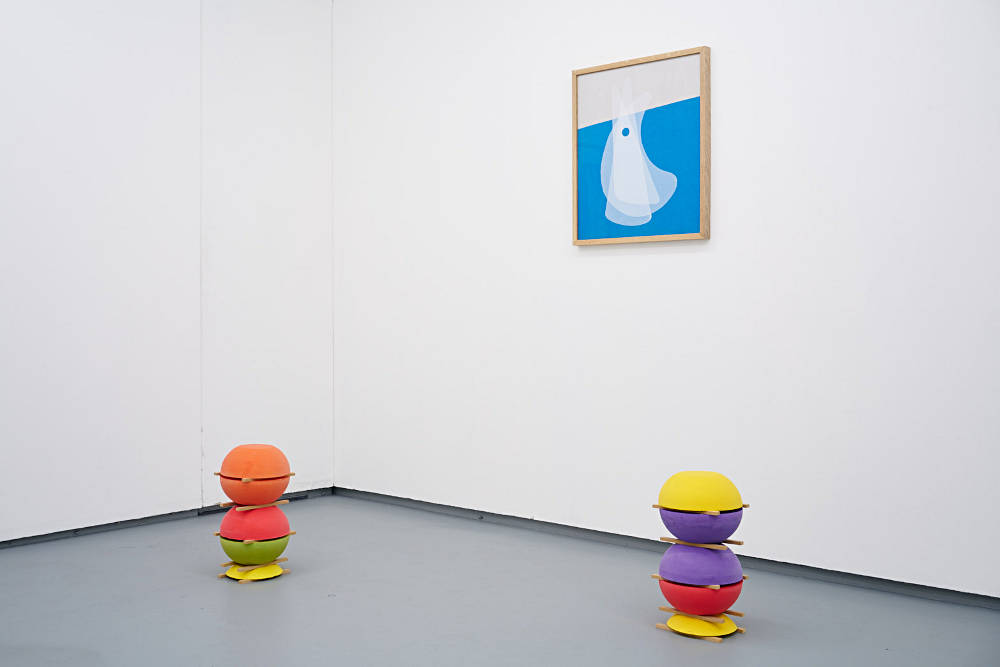 I find that there is something very rewarding and comforting about doing the same tasks over and over. Or spending time in a place with only a limited number of elements, absorbing the environment slowly. This allows for a mental space where the daily processes can become routine, and create an intimacy and immediacy that is otherwise hard to achieve. A familiarity with the surroundings is due to a certain choreography of repeating gestures. In many ways Roithmayr’s collages at Tenderpixel behave the same way, they were born out of following simple rules, approaching things again and again, playfully and patiently, until they found their final shape from an infinite number of possibilities.

In a place like that described, a ritual of repeating movements is enacted, almost the same each day. As a result, slight changes start to occur in the surfaces over time, through coming in contact with the body in specific ways. Touch begins to shape the objects perhaps in similar ways to making a mark and manipulating surfaces while creating artworks. Everything has a place without having to consciously think about it anymore. However, even a place with such comfortingly familiar shapes sometimes feels ultimately unknowable. Any material – even after centuries-old practices using them; or any person – even after decades of a close relationship, no matter how much time we spend with them, they still hold secrets and ultimately remain something infinitely distant and strange.

Plaster specifically has a long history, with techniques largely unchanged, yet how we relate to it is different and contemporary each time. Roithmayr combines his intimate knowledge of the material with unpredictability, as he set up some experiments, teasing out unexpected results. To a certain extent, he is giving over control in this hidden operation, deliberately allowing space for accidents in order to learn from them through these processes. His work is about generating and tracking changes in the material. The ambition in his practice is to register the consequences of one surface or material yielding another through capturing the unexpected gestures that occur in the gap between mould and cast. His work consists of materials that create each other the moment they are put together.

Florian Roithmayr (b. 1976, Rosenheim, Germany), lives and works in Reading and Wysing. He initially trained as a theatre designer with Herbert Scherreiks in Germany before studying and researching art at the Slade School and Goldsmith College in London.

Florian Roithmayr: something infinitely distant and strange, 2018. Photography by Original&theCopy, courtesy of the artist and Tenderpixel.