The exhibition collected stories brings together new work groups by artist and photographer Flo Maak (born 1980 in Fulda, lives and works in Berlin). 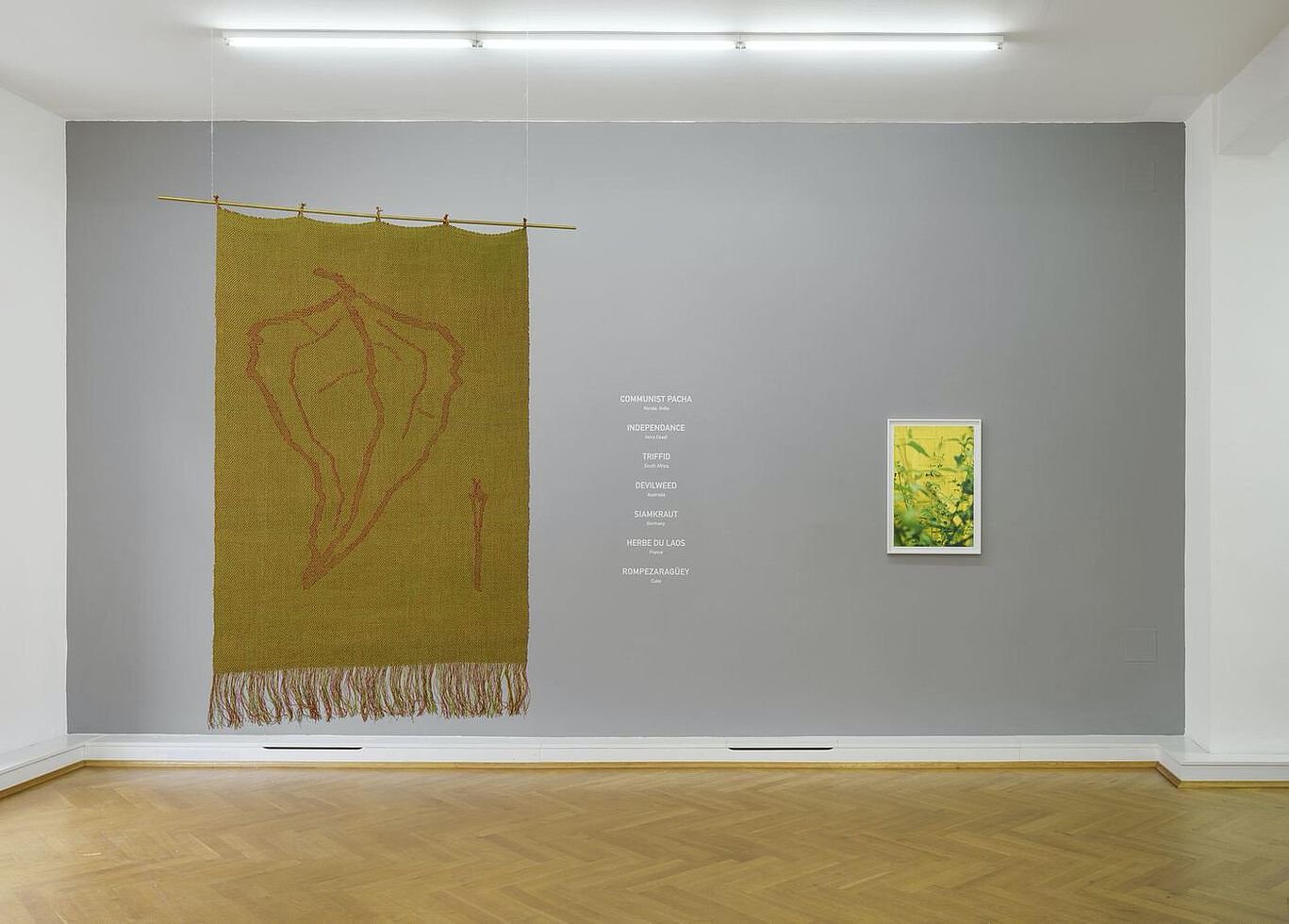 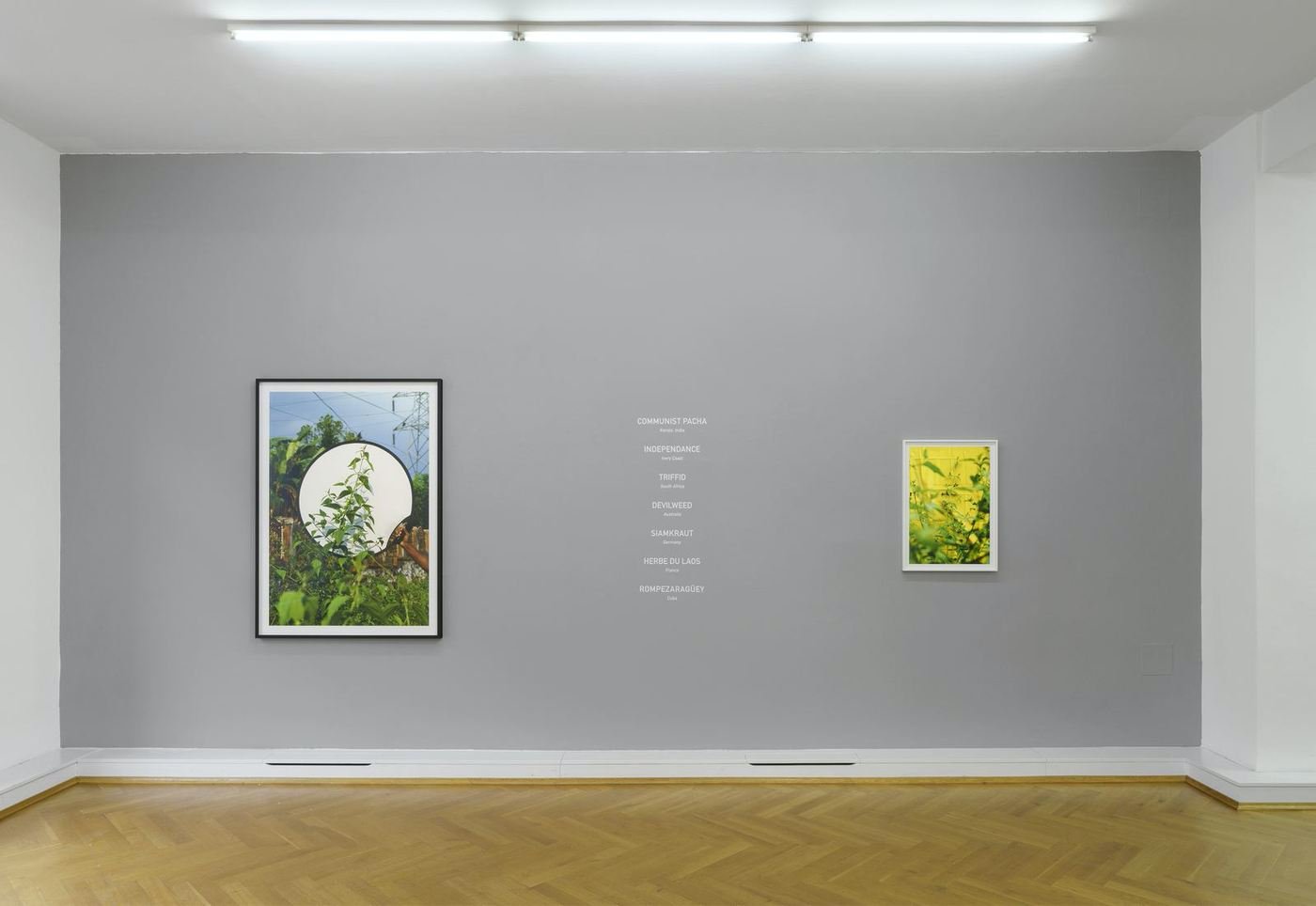 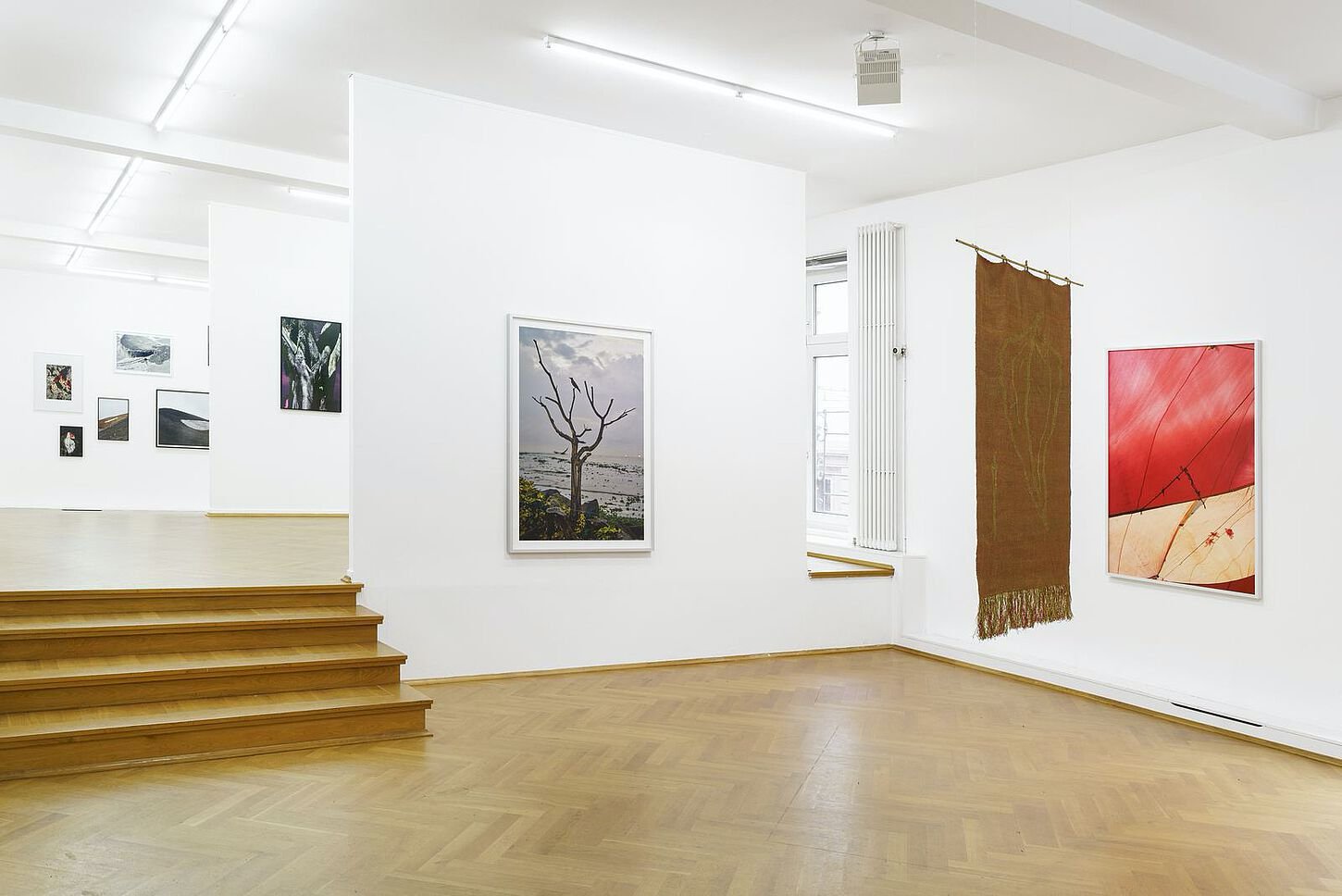 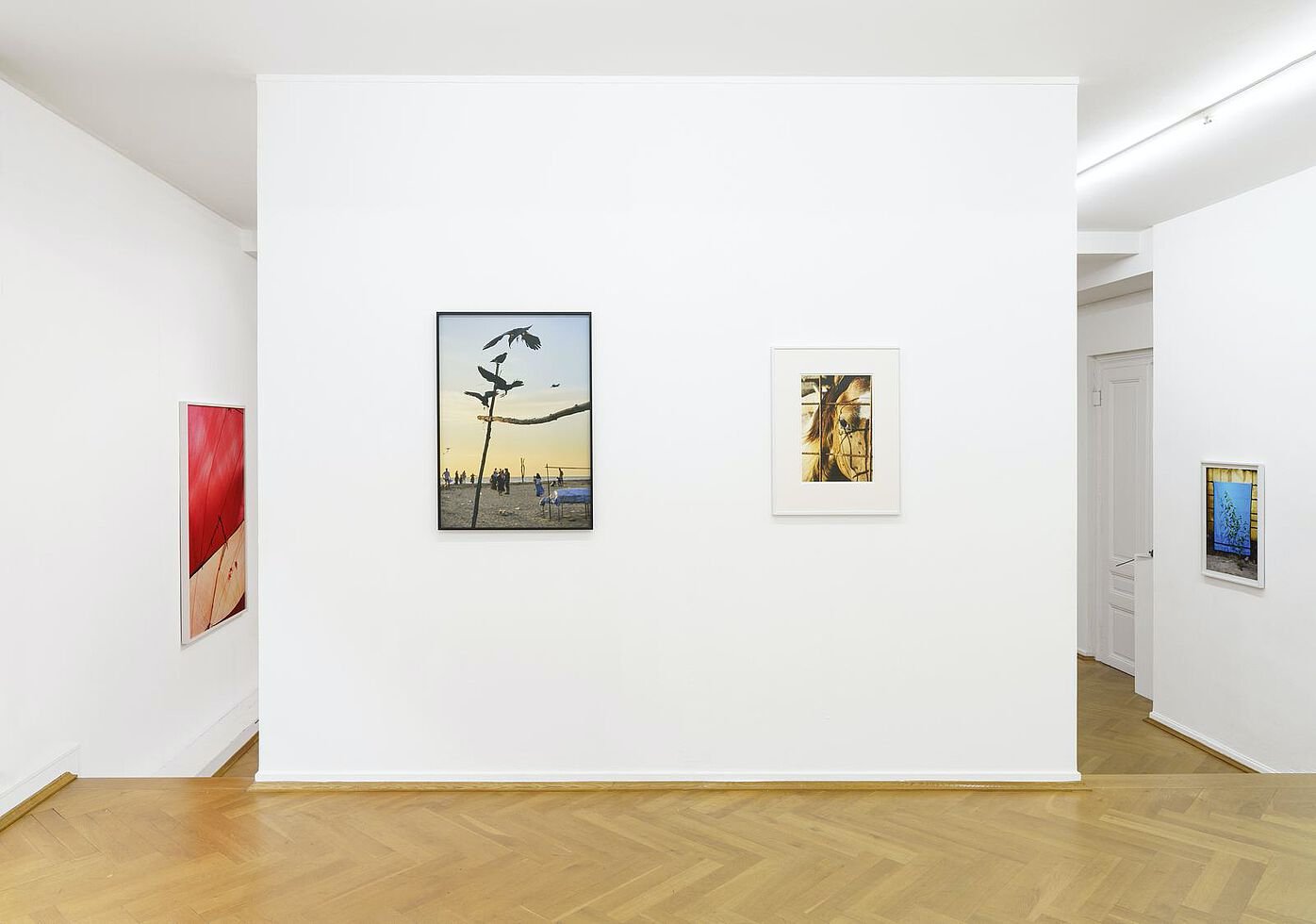 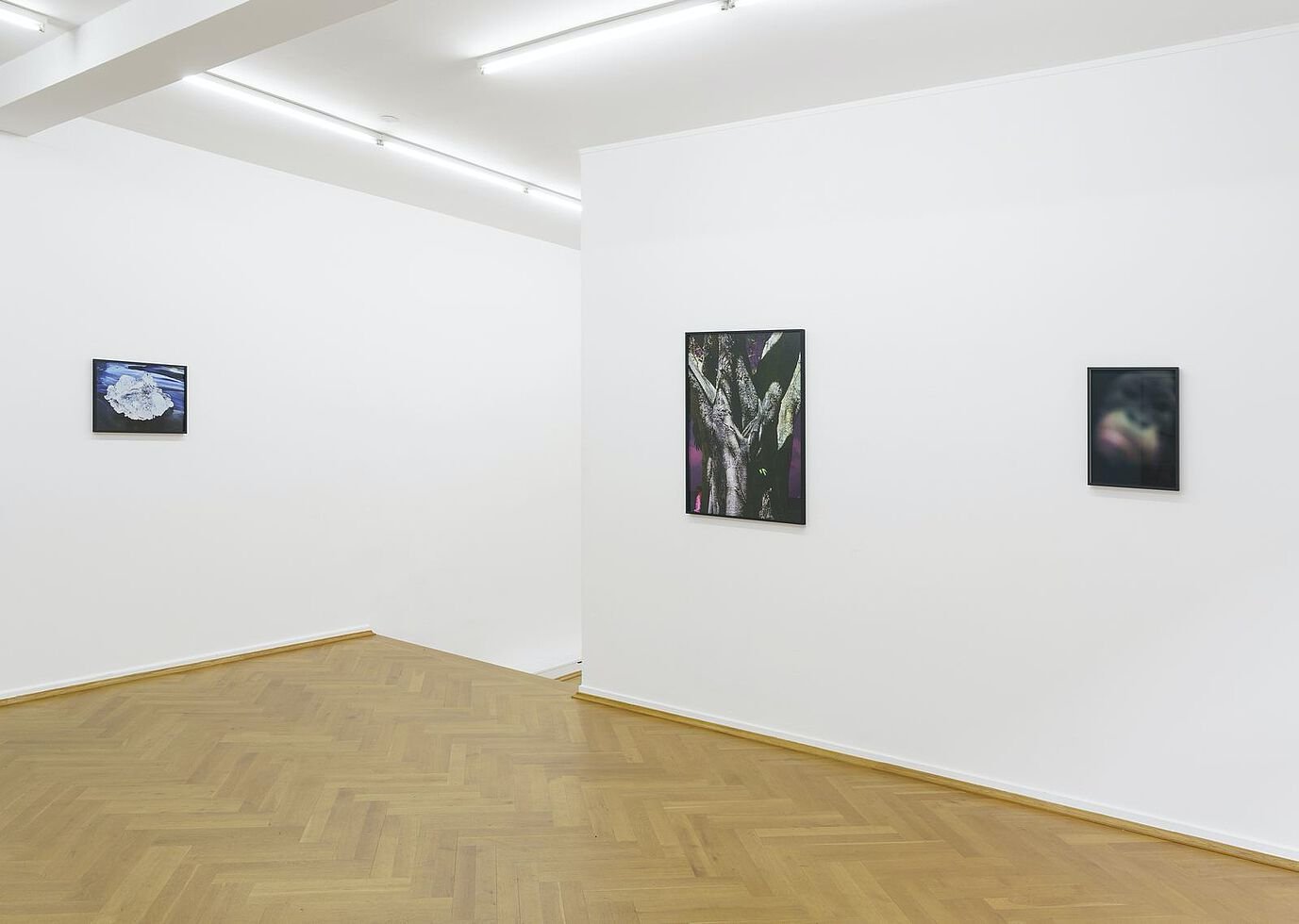 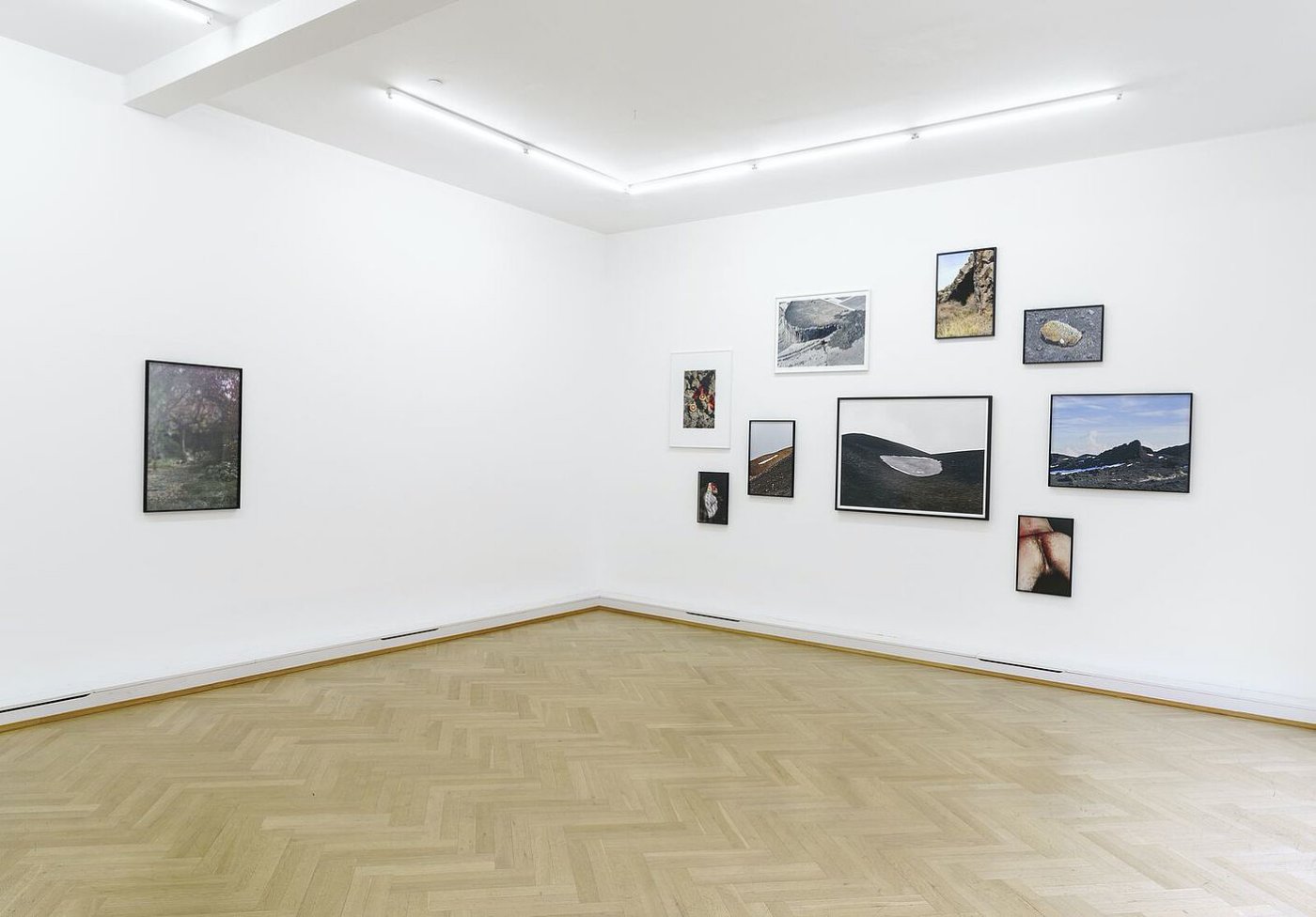 The photographs and installations on display address questions of coexistence on our damaged planet. If at all, humans feature in the background of Maak’s works, while the decisive agents of this exhibition are plants, animals and volcanos.

The central installation “The Red Green” revolves around the global pervasion of the plant Chromolaena odorata, also known as “Siam weed”. In many countries it is regarded to be an invasive species as is reflected by another of the names it is given, devil’s weed. In the Southern Indian state of Kerala, on the other, it is known as “Communist pacha” and associated with the Communist movement. Maak staged his shots of the plant during a stay in Kochi, India. His photographs, shown alongside a hand-woven flag and a text-based wall piece, tell of the plant’s world-wide spread and trace its (presumed) origins, affiliation and migration. A variation of this piece will be shown in the context of the Kochi-Muziris Biennial in November this year. It was created with the generous support of the Goethe-Institut Max Mueller Bhavan Bangalore.

Most of the images in the series “Ground Truthing – Mount Etna” were shot in Sicily. During hikes on Mt. Etna the artist learnt that volcanic energy is not just a destructive force of nature but as part of the global energy cycle is also linked to the very processes that make life on earth possible. Maak documents volcanic landscapes and traces of infrastructure in these and places these images in relation to human bodies and agents. In doing so he combines staged with found scenes, plays with formats and forms of presentation and thus creates entirely unexpected relationships.

In the publication issued on the occasion of the exhibition, the sociologist Katharina Hoppe encapsulates this as follows: “Flo Maak’s work makes it clear that we should not imagine life and nature as a Garden of Eden that has been destroyed and to which we could return. The boundaries of organisms are precarious and permeable. Bodies are dependent on and permeated by the heterogenous other, such as organisms, artefacts and bacteria. They are inconsistent “multitudes”: congregations, movements, constellations that describe what is primarily a mere co-existence beyond political frameworks, statehood or social contracts.”

Flo Maak studied Fine Arts at Städelschule – HfbK, Frankfurt, under Prof. Wolfgang Tillmans from 2004-09, he is a member of Prof. Willem de Rooij’s master class. From 2013-7 he was the Professor of Fine Art Photography at Chung-Ang University, Seoul, South Korea.

Courtesy of the artist and Bernhard Knaus Fine Art, Frankfurt