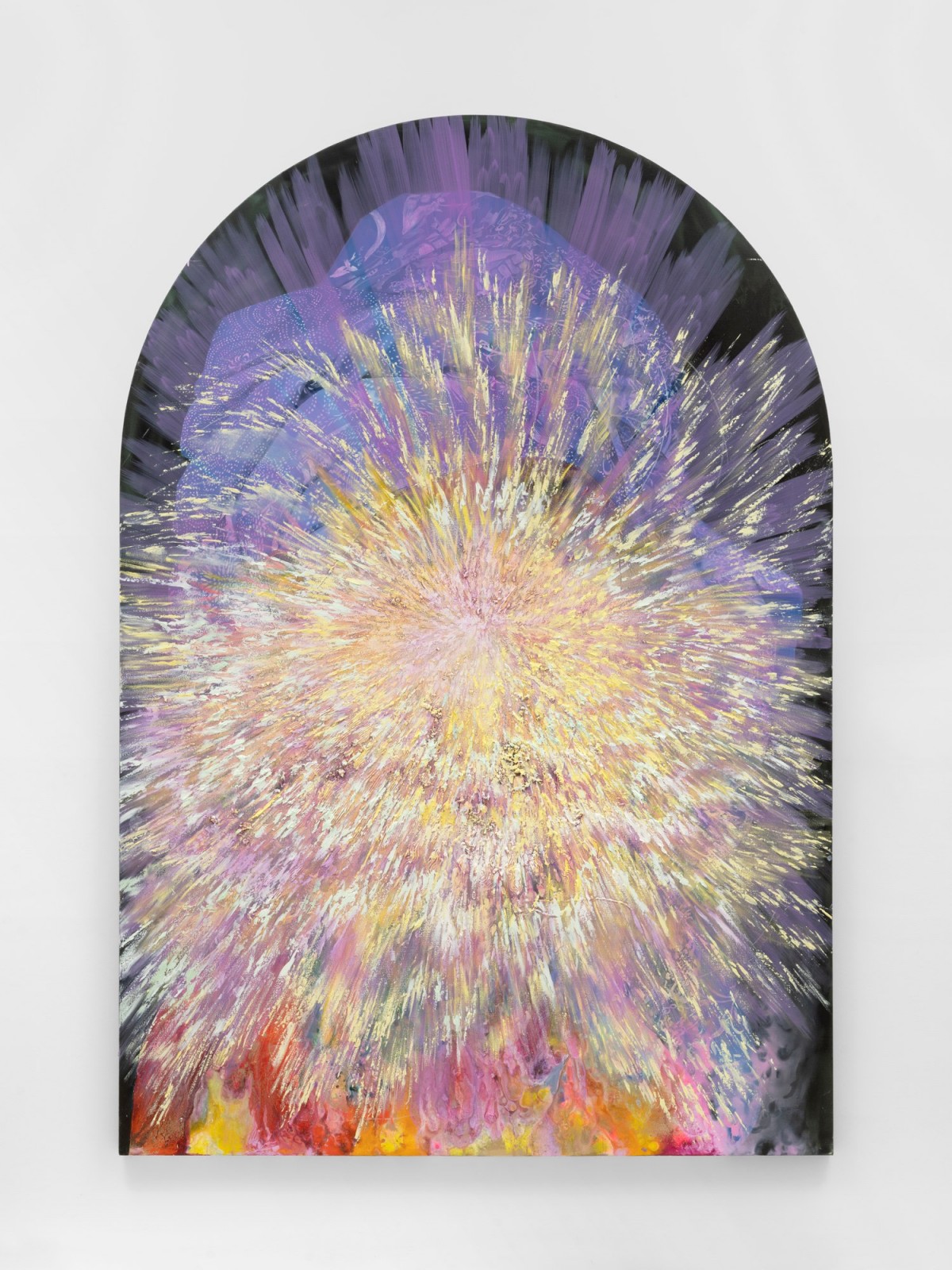 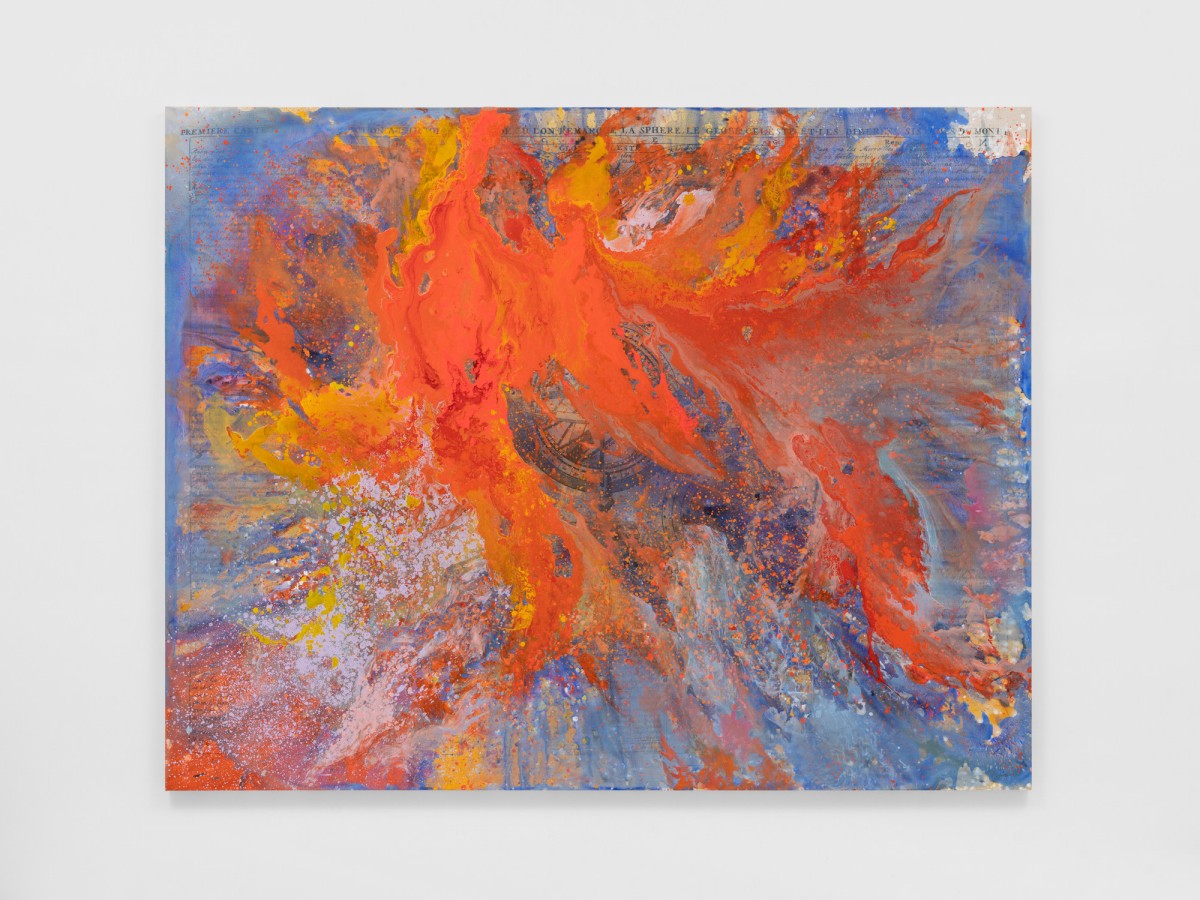 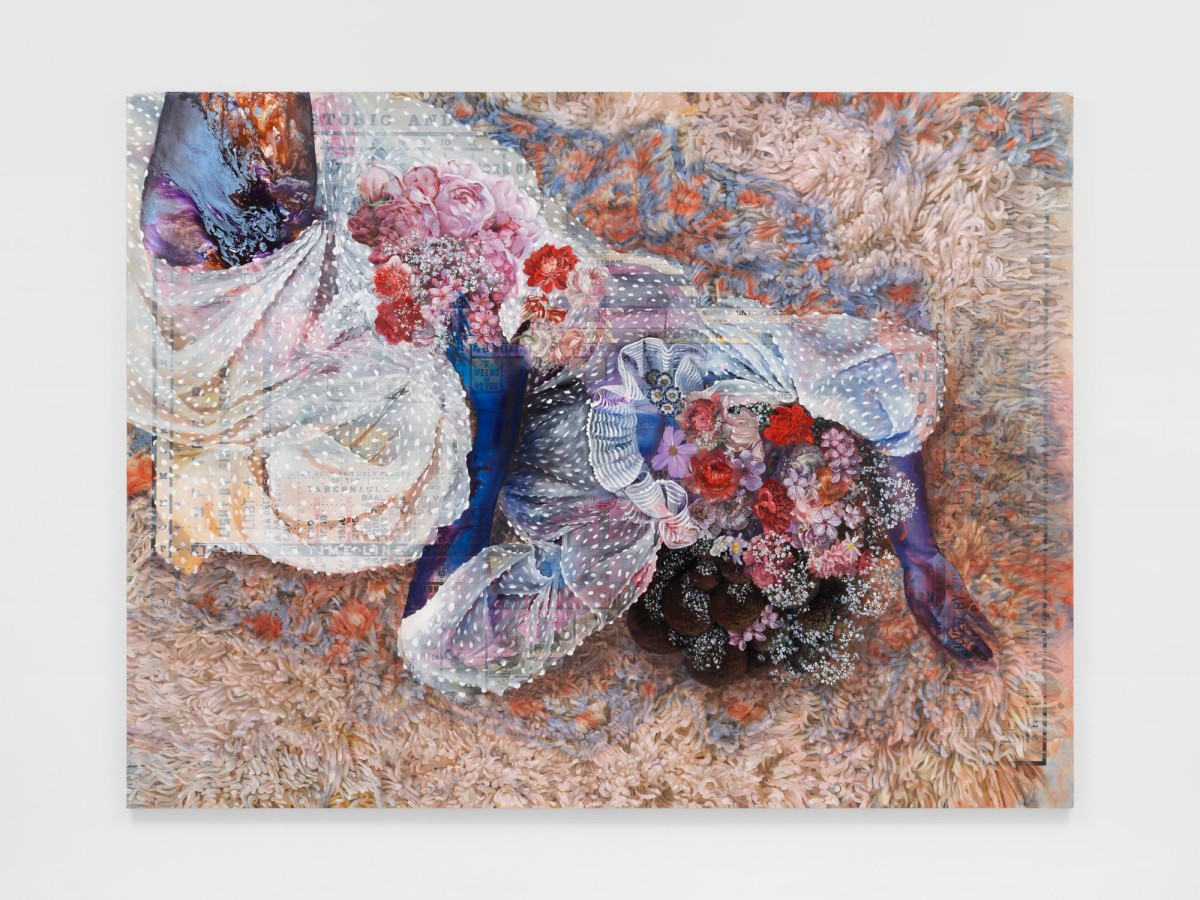 Firelei Báez
Olamina (How do we learn to love each other while we are embattled), 2022 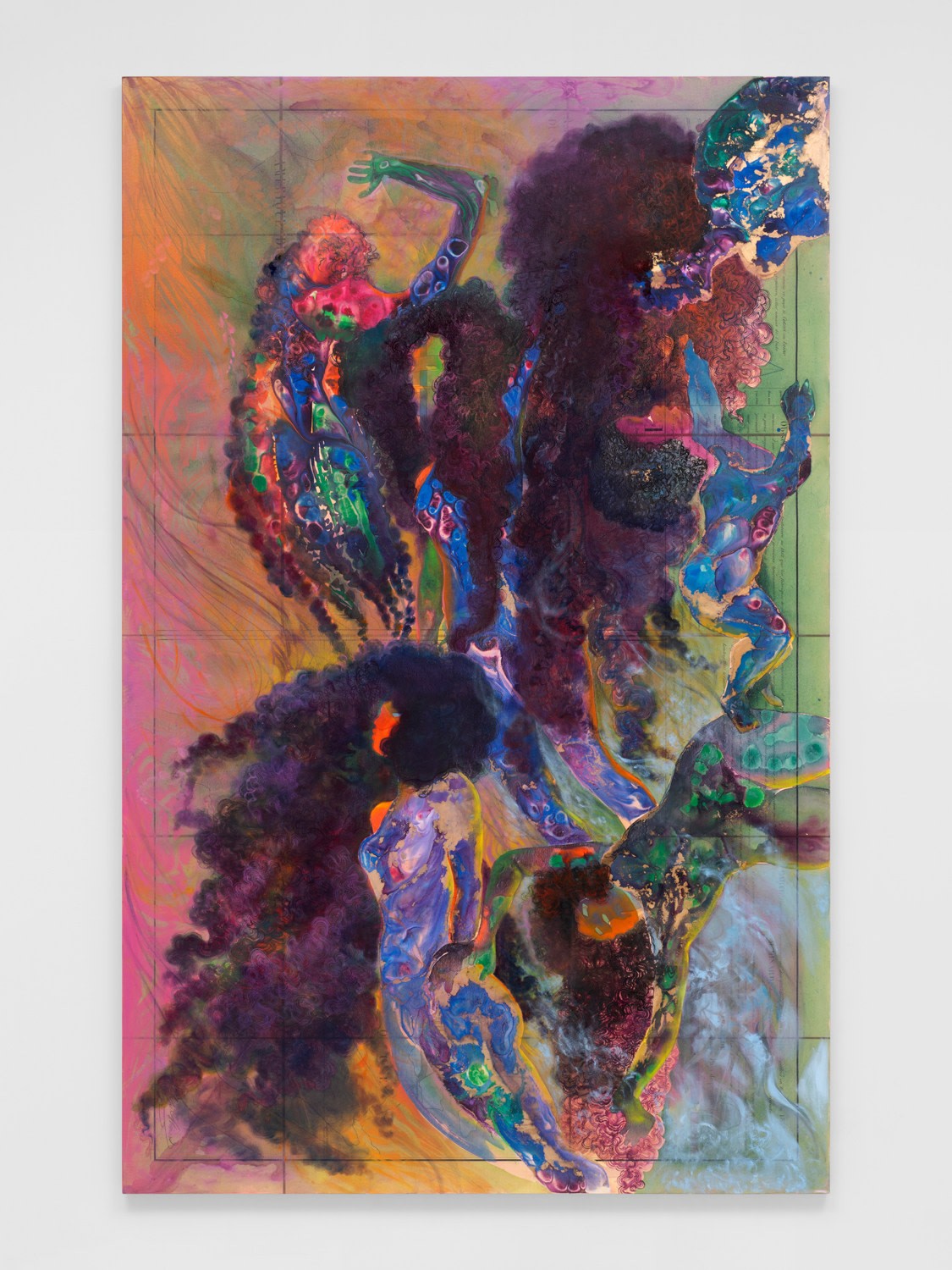 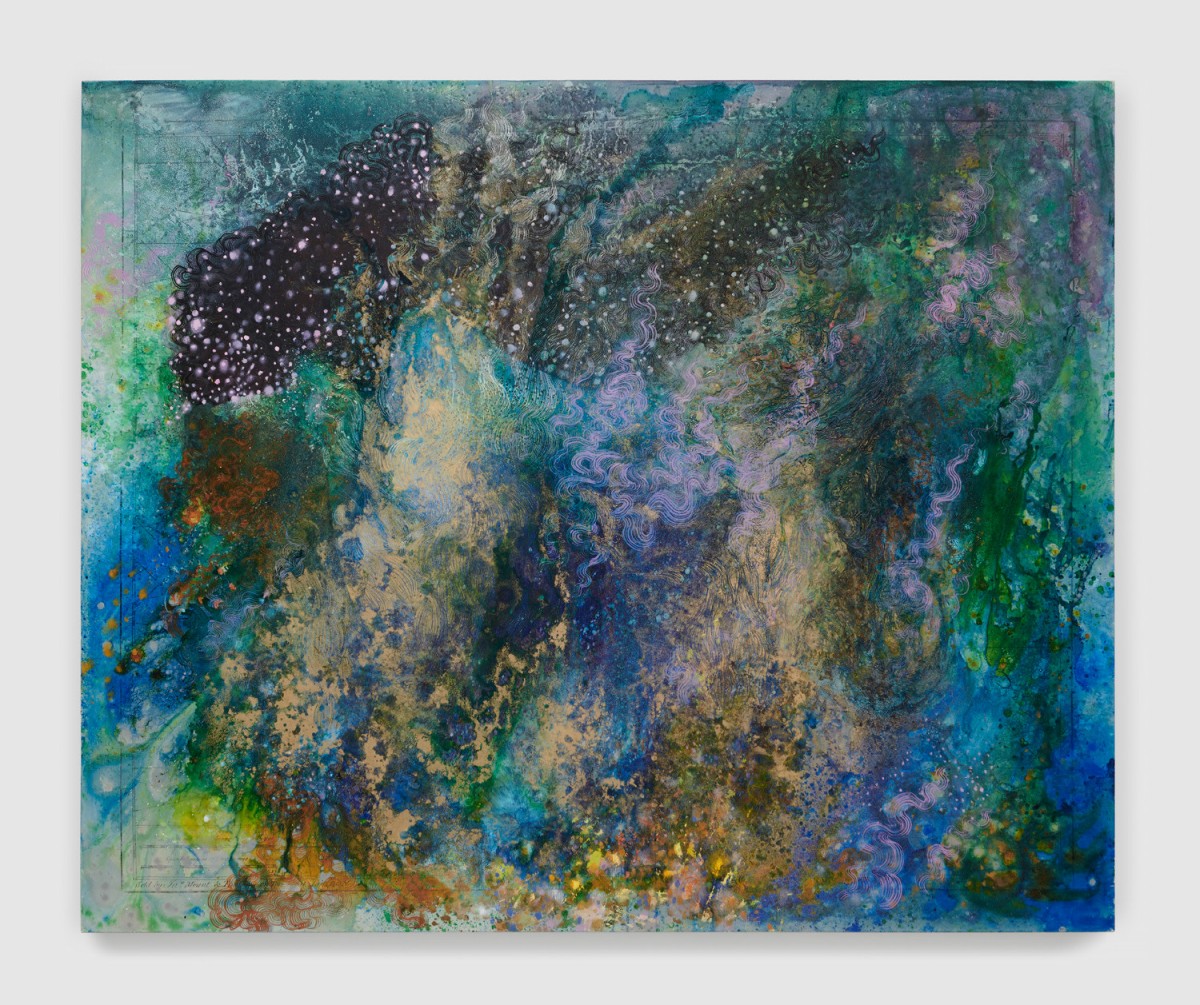 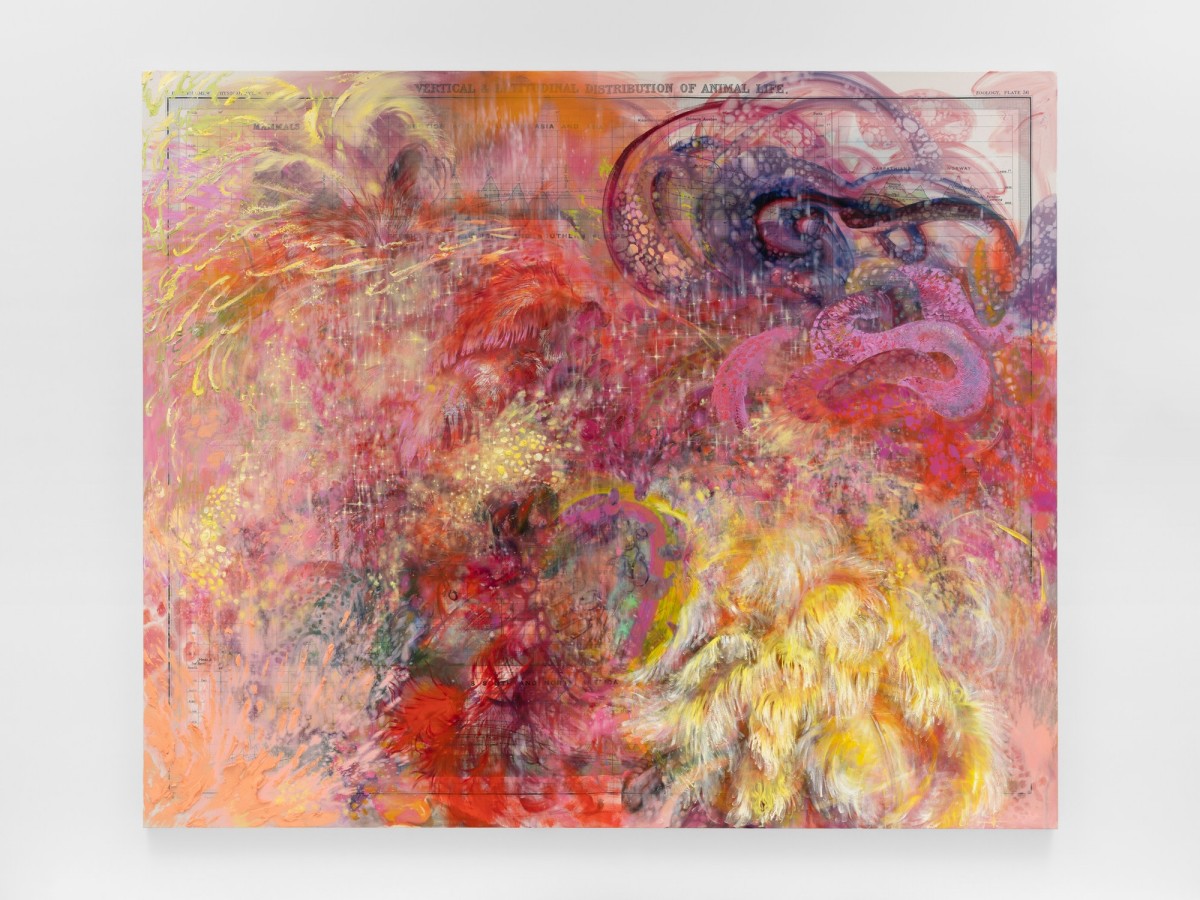 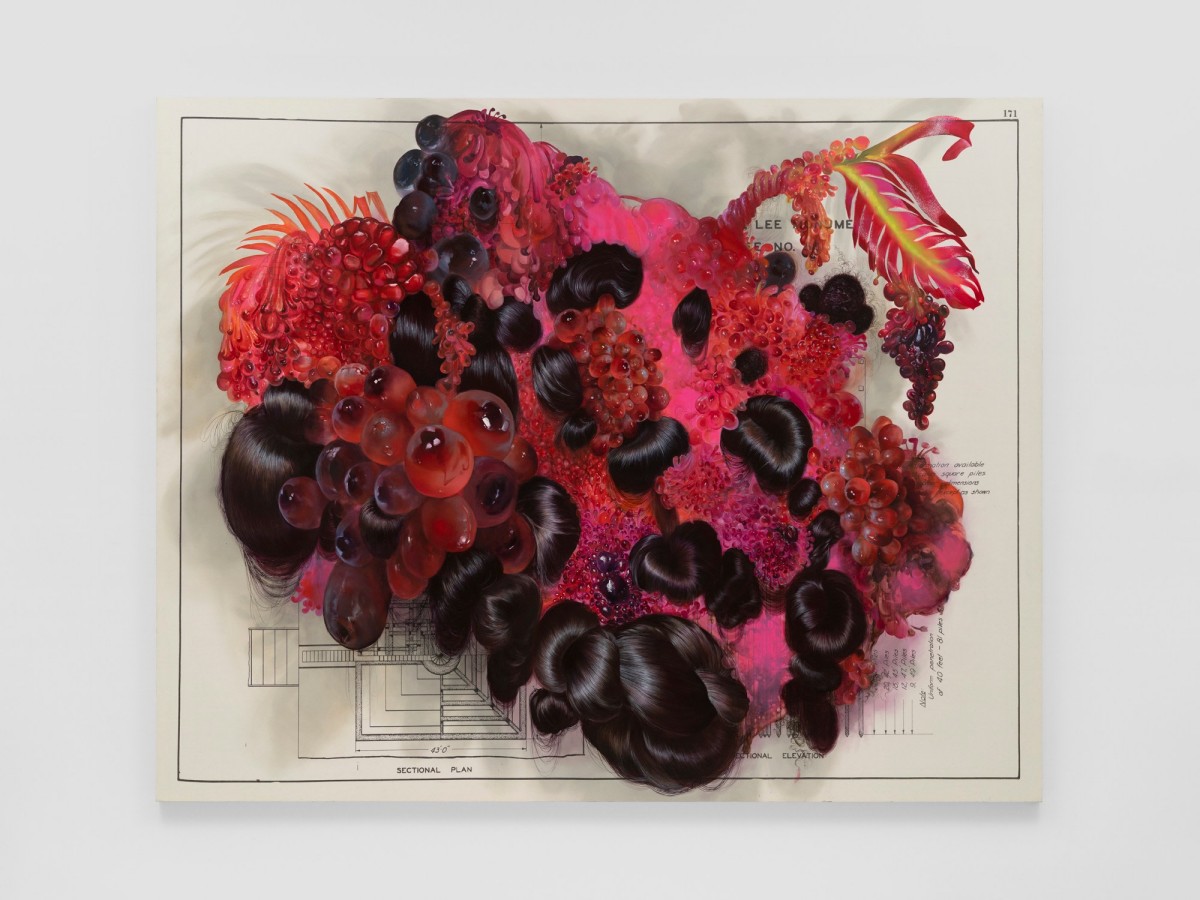 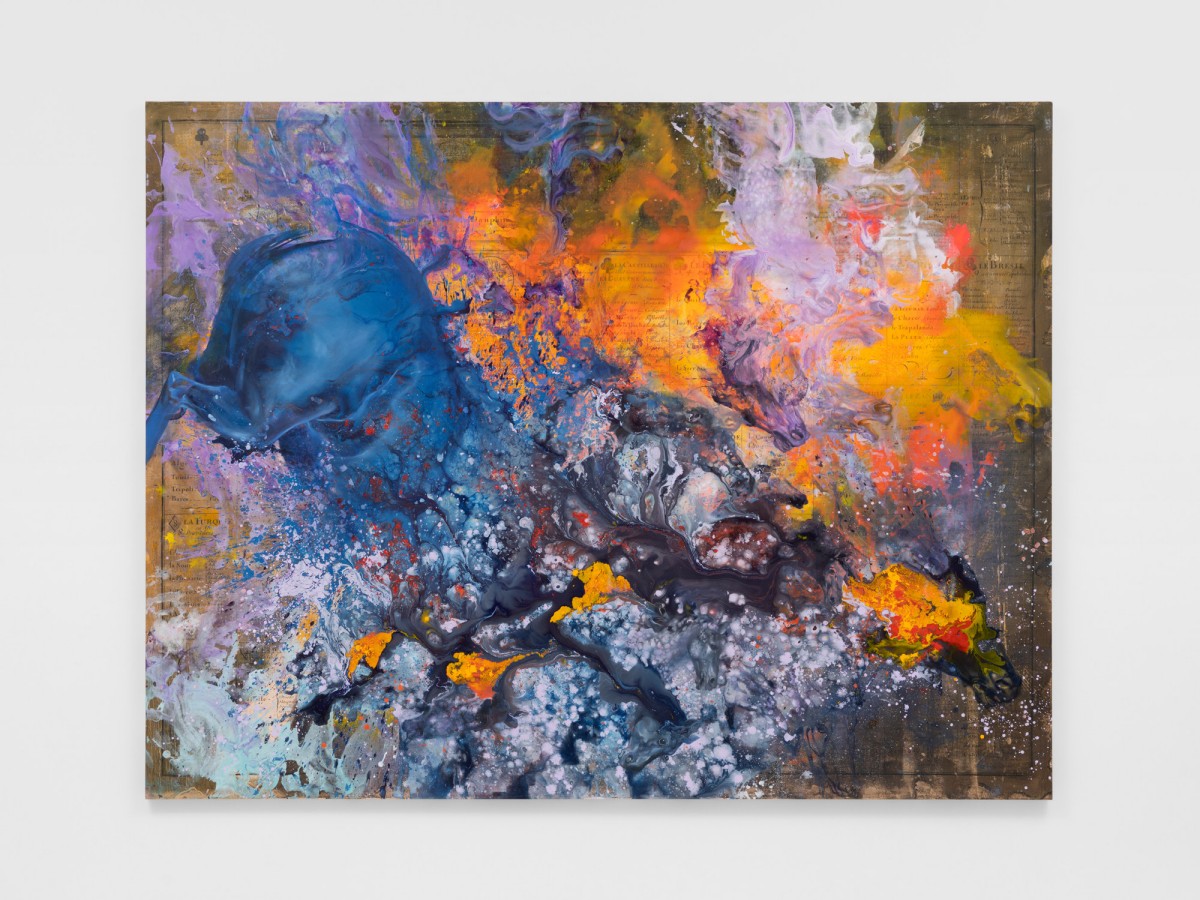 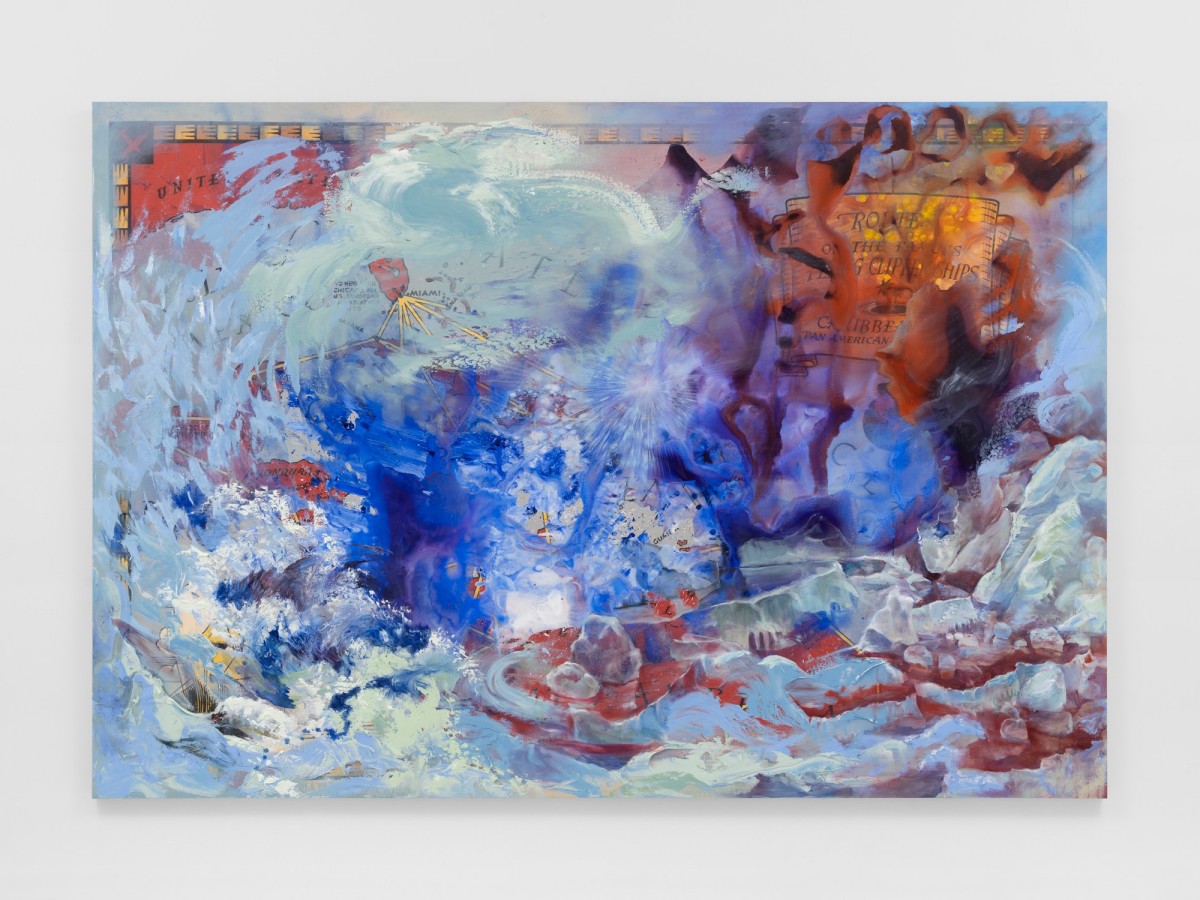 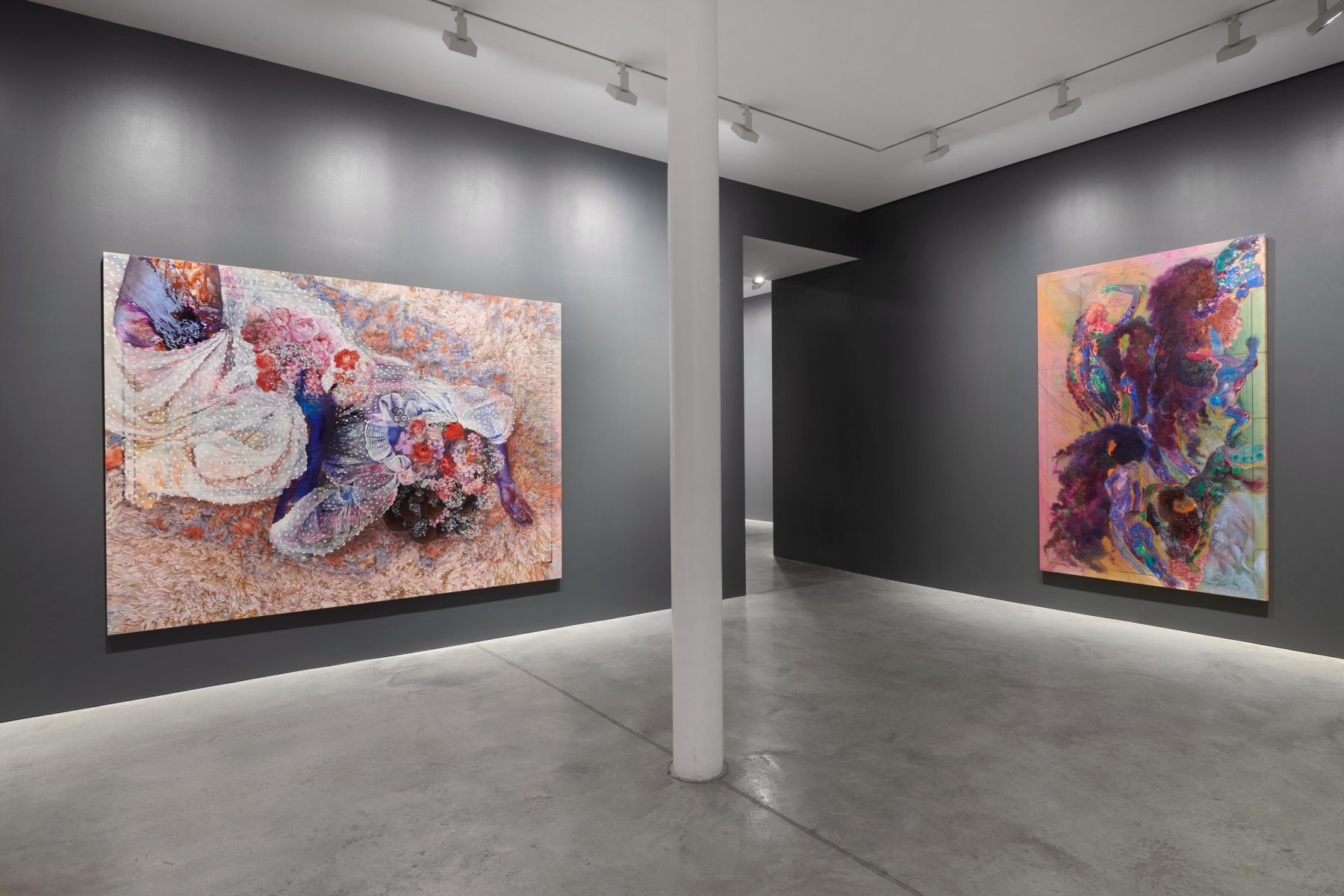 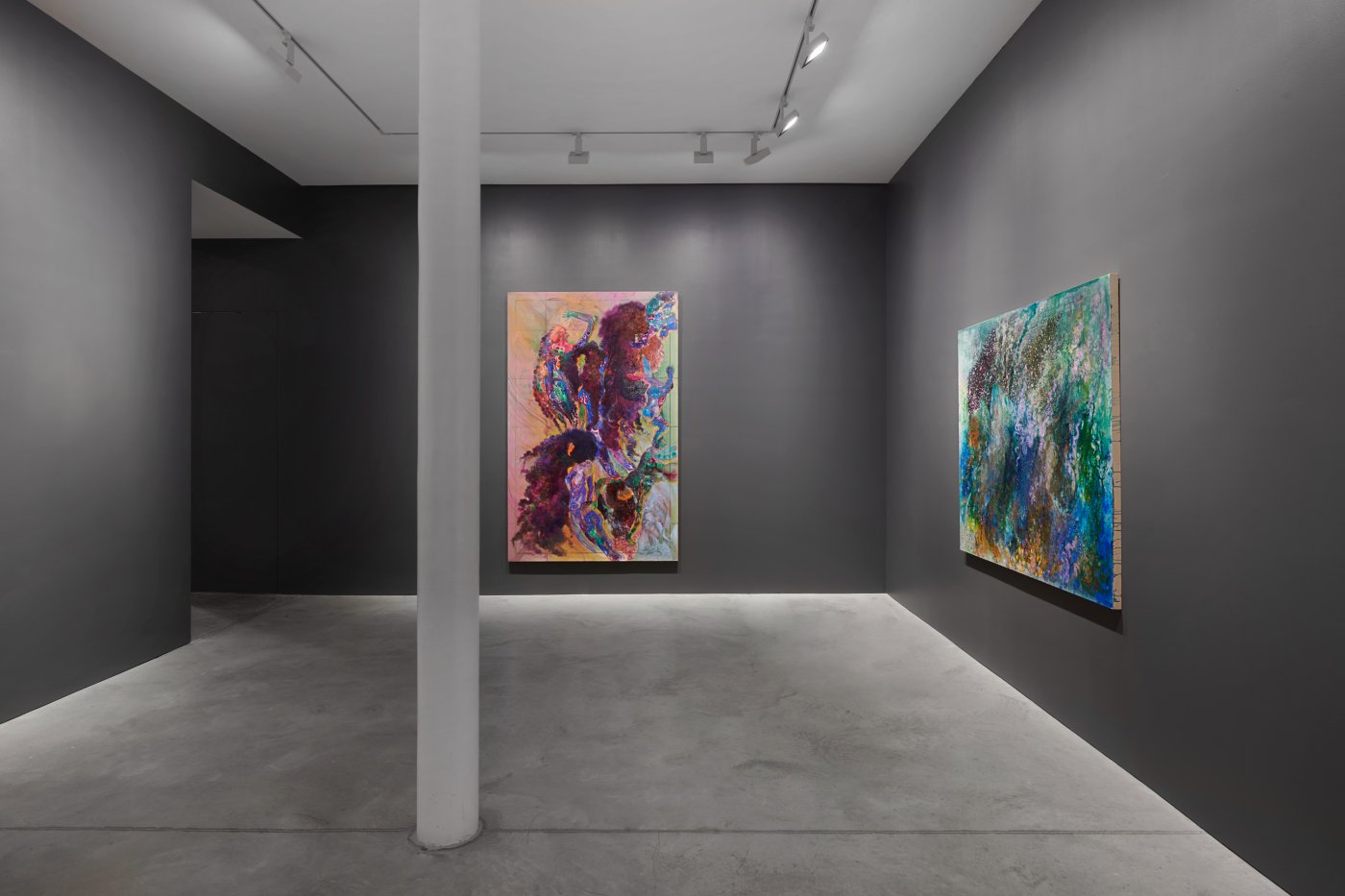 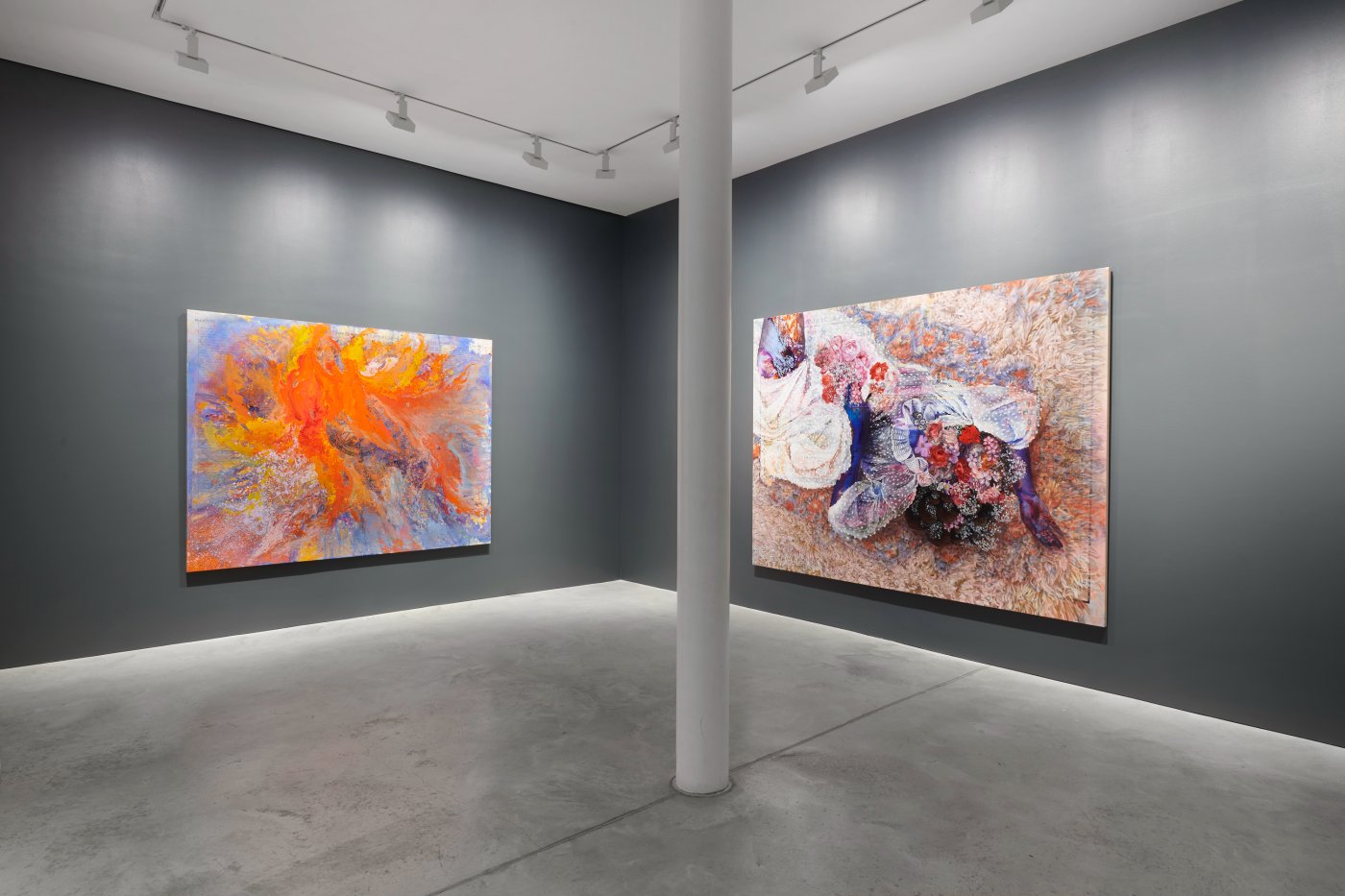 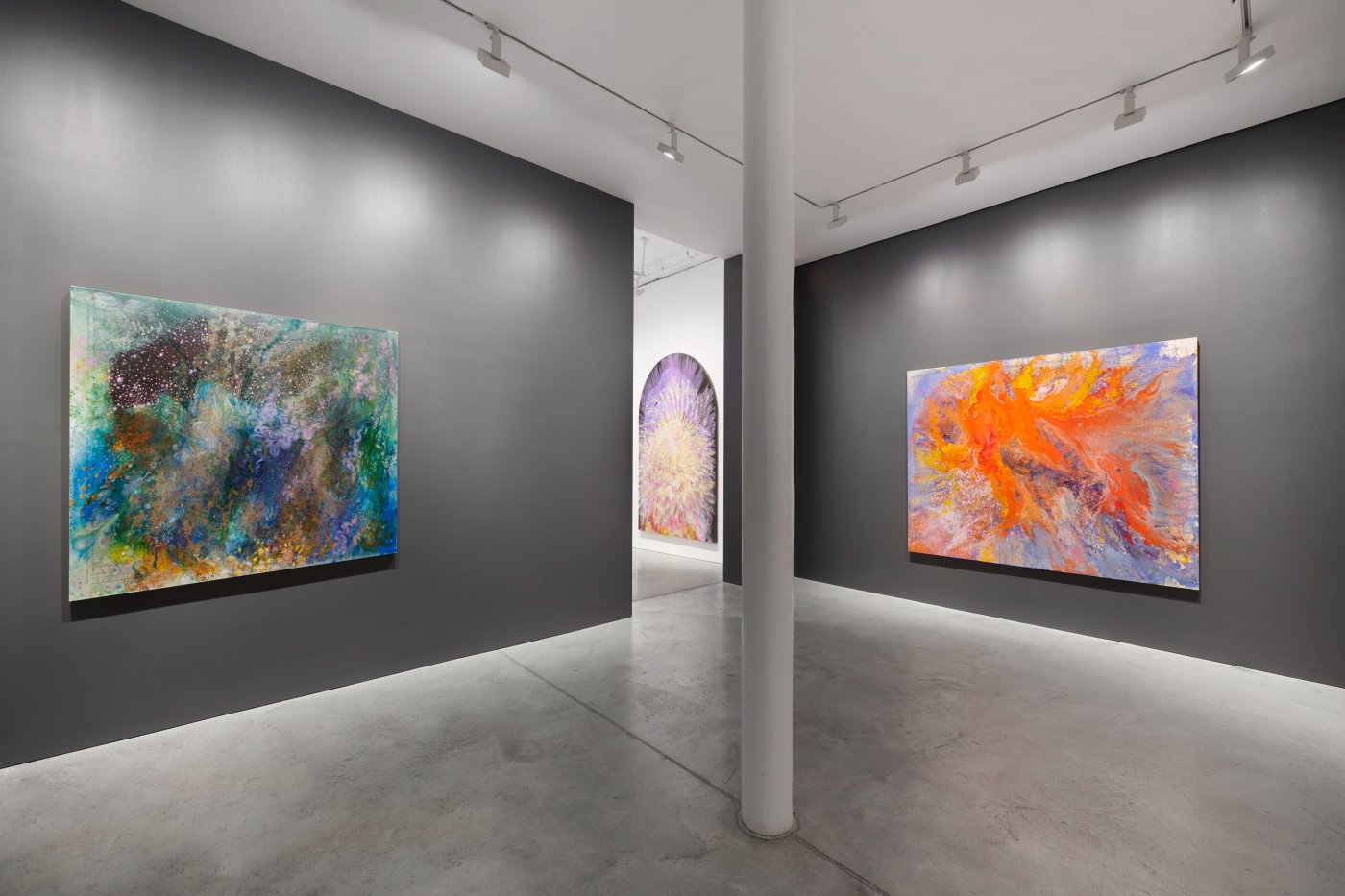 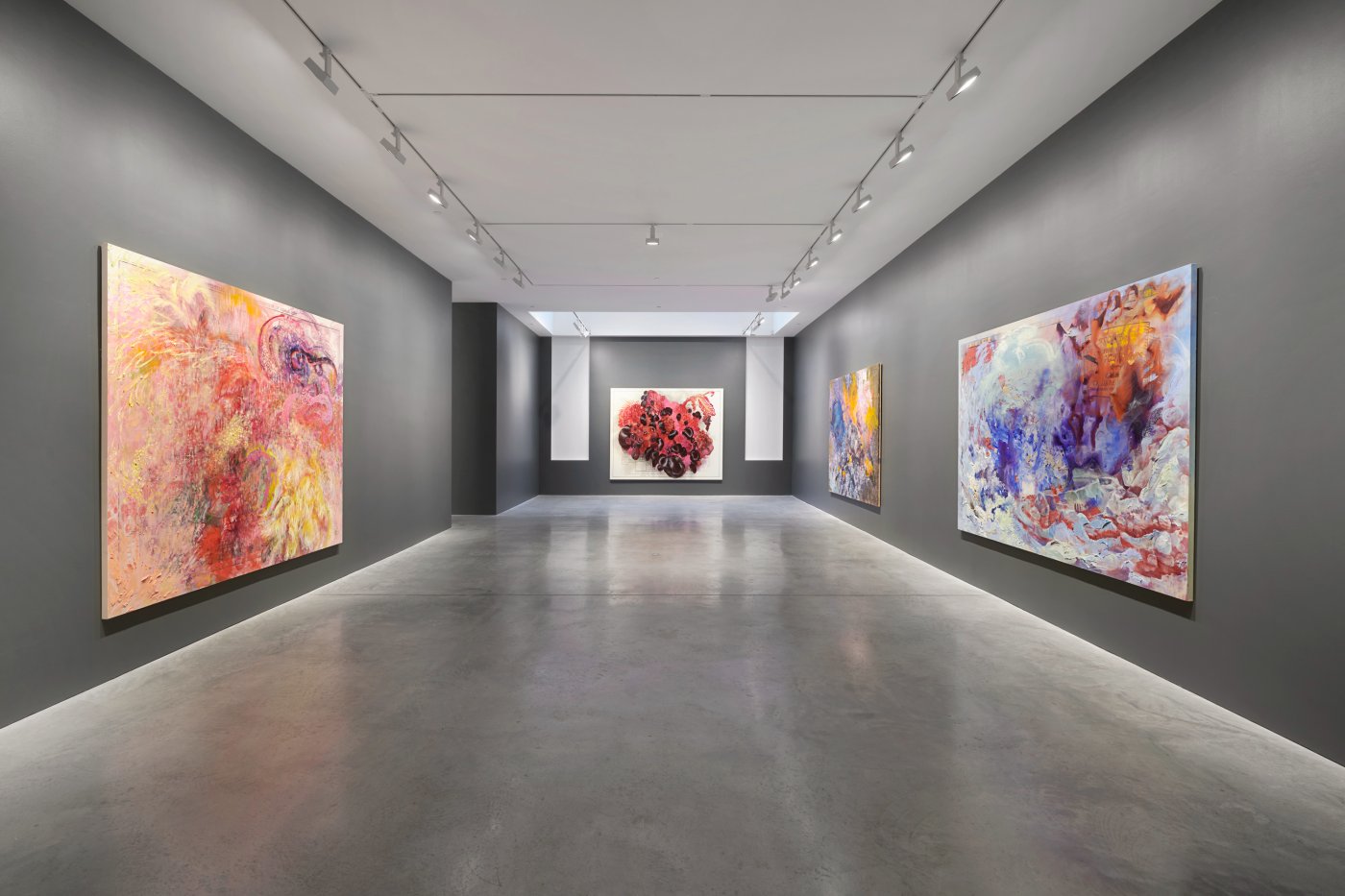 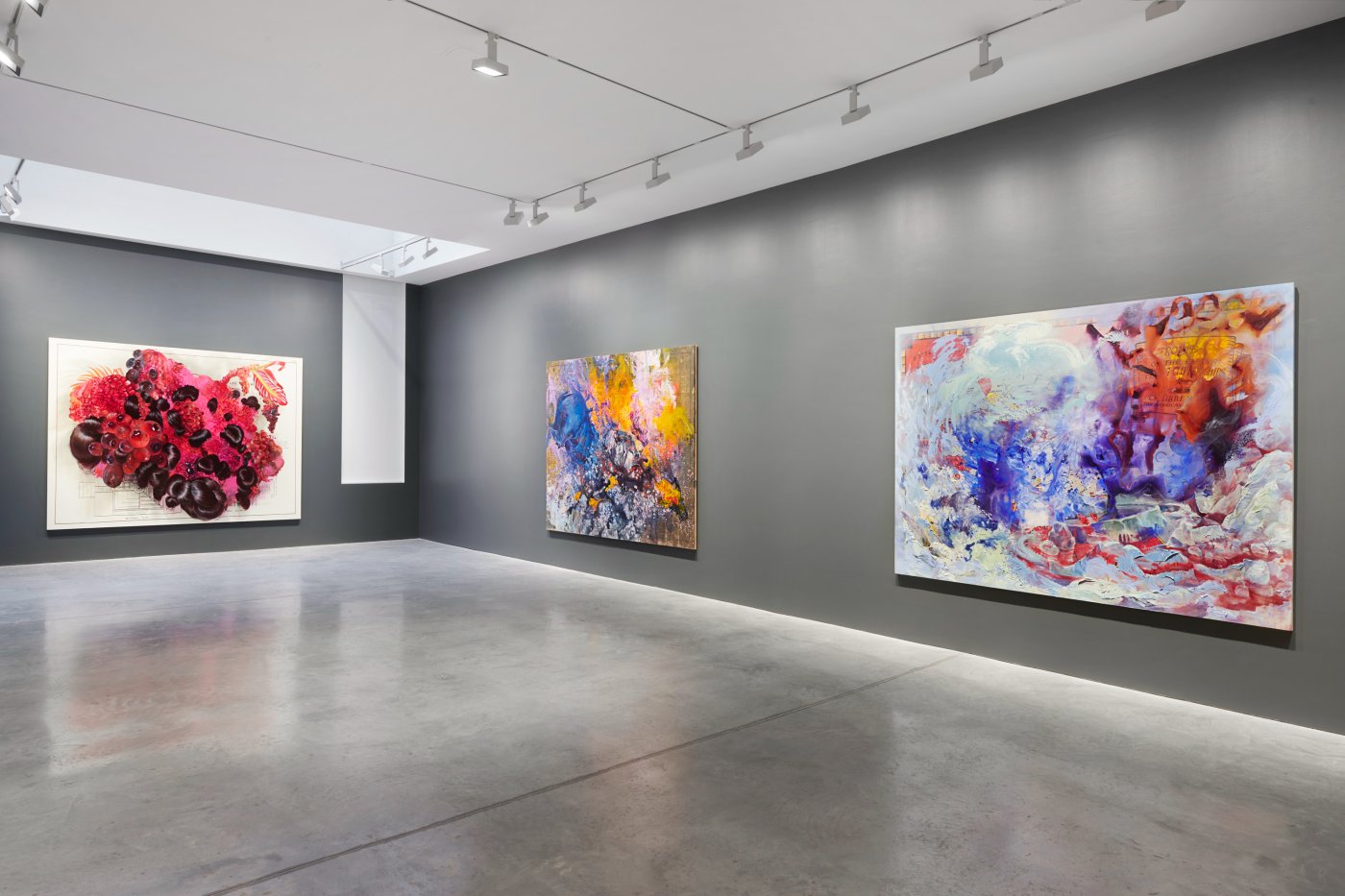 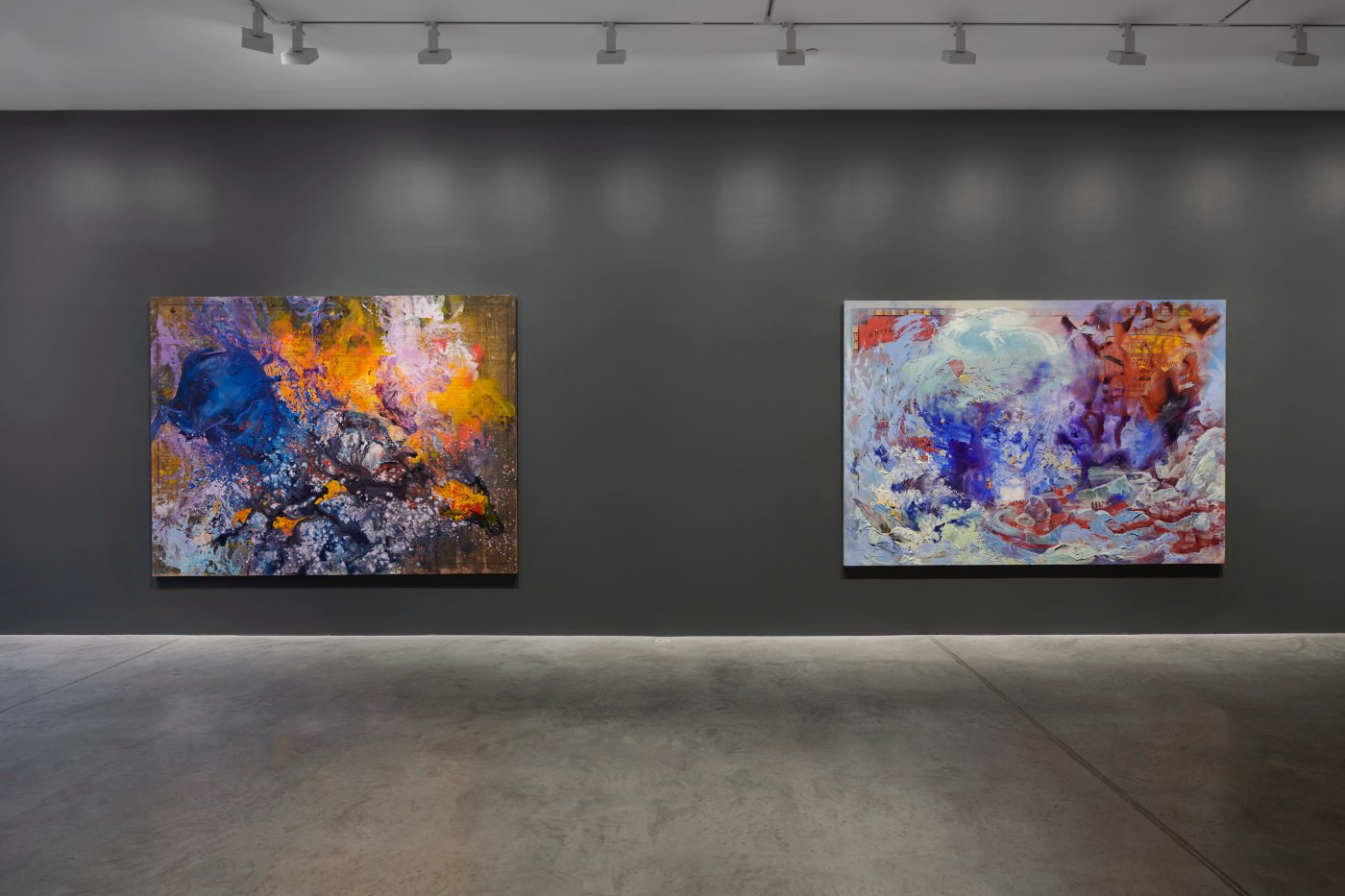 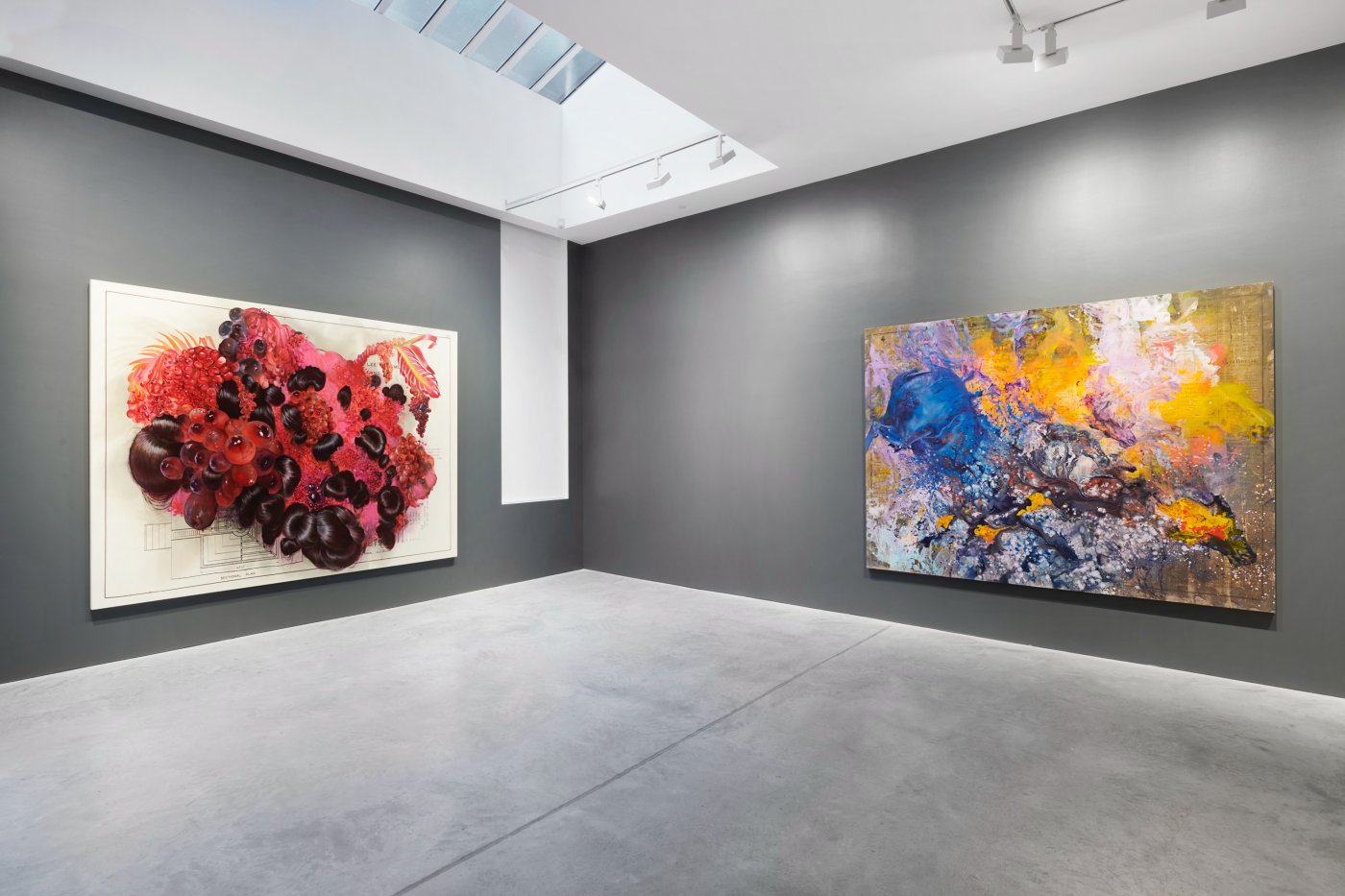 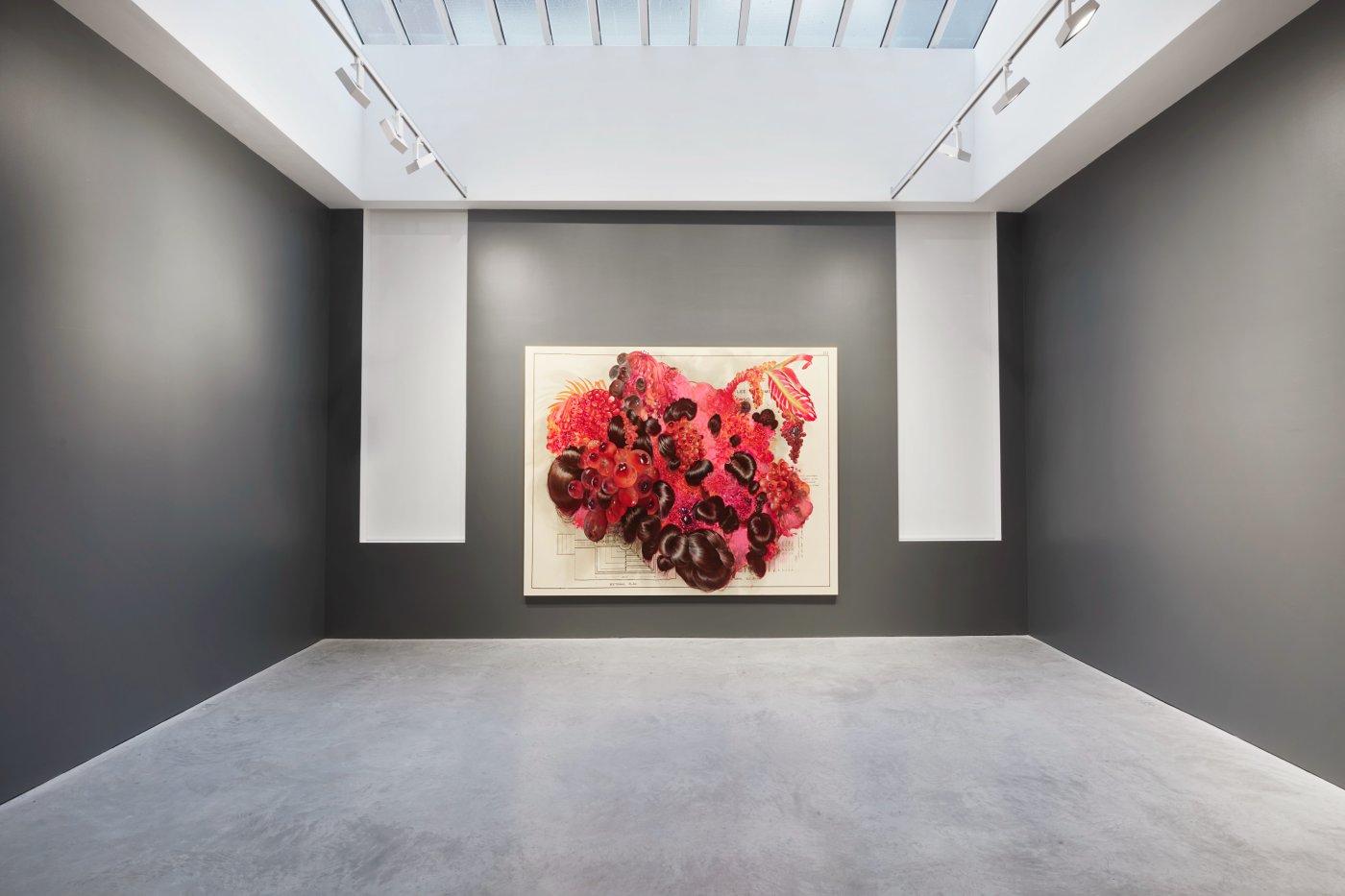 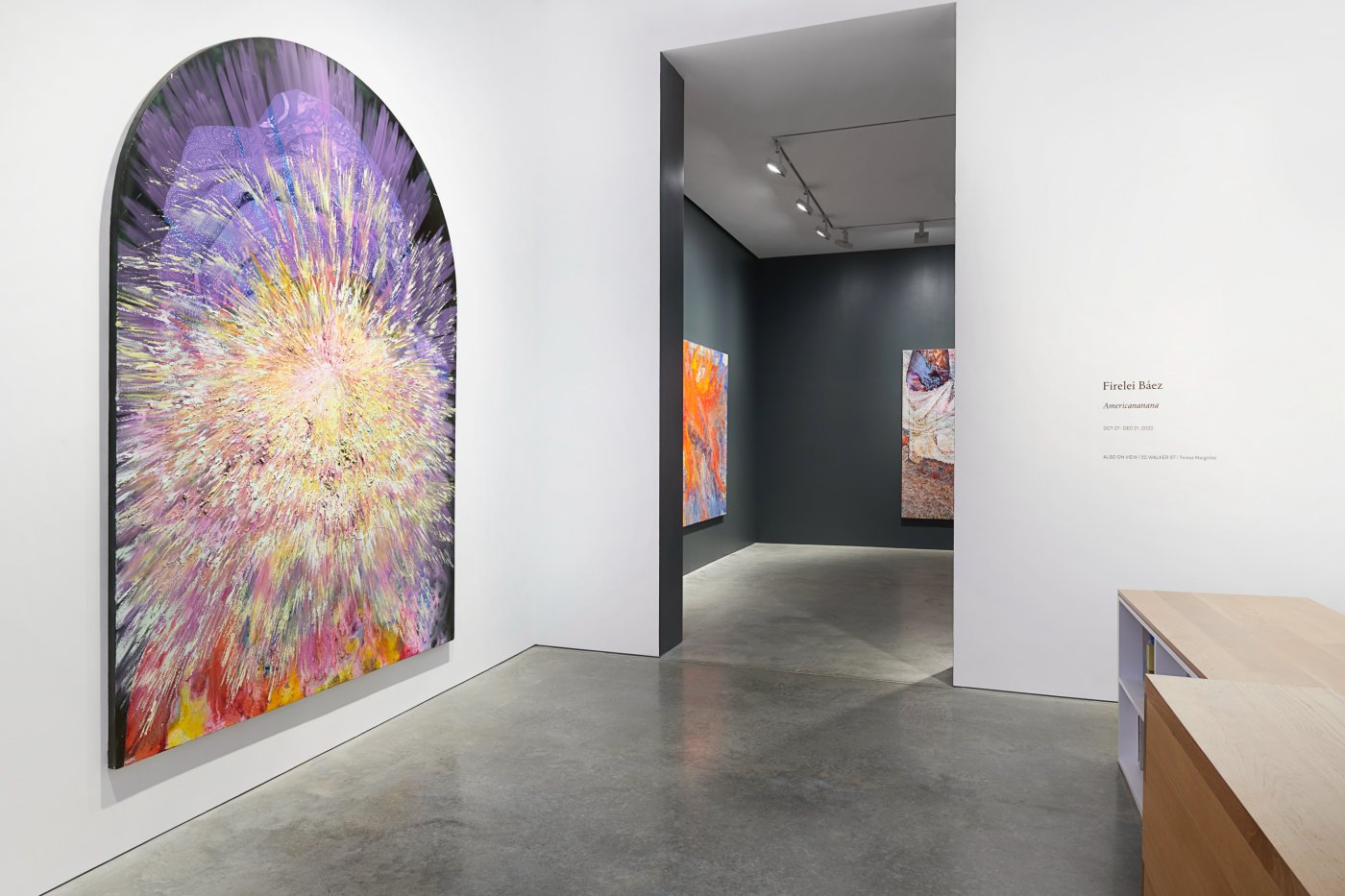 For over a decade, Báez has painted transcendent chromatic interplays of abstract gesture and symbolic imagery directly onto found maps and printed materials to disrupt the boundaries they serve to delineate. For her third solo exhibition with the gallery, Báez presents a group of immersive large-scale canvases that continue and deepen her ongoing exploration of narratives of Euro-American exceptionalism. In her vivid new paintings, Báez ruminates on the foundational mythologies that have come to form a uniquely American brand of nostalgia, one shaped by the projected desire for an idealized past that never was.

The exhibition’s title is a reference to Katy Siegel’s 2010 exhibition, Americanana, whose altered spelling of Americana was intended to “evoke the absurdity of European settlers using Indian words to name soccer clubs and suburban streets…or the countless other attempts in our culture to recover a lost past.” (1) Through her world-building painterly interventions, Báez confronts these exclusionary streams of influence, decentering them with explosive, prismatic abstract conjurations intermingled with spectacularly constructed trompe-l’œil figuration.

For Báez, abstraction is born out of a virtuosic handling of alchemical pours of paint and an essential understanding of gesture as form. The body is inextricably tied to these highly physical maneuvers, which function on the one hand as a kind of obliteration, and on the other, a tender ablution. In Báez’s new paintings the fluid movement of material across the canvas and a dynamic manipulation of the composition take on a Rorschach effect; opening up a channel for generative exchange between the artist and the viewer. Herein, abstraction becomes a form of liberation and the oppressive expectations of hyper-visibility often imposed upon artists of the diaspora are troubled and intercepted.

In other paintings, unbridled abstraction is married with highly rendered, illusory mark making. In one fantastical composition, Báez invokes a female figure robed in a diaphanous ruffled dress luxuriating on a plush tufted rug. With flesh transformed into a swirling map of the cosmos, her body becomes a hallowed site–unfixed from time and space–within which rest, resilience, and healing are paramount and justly prioritized.

Masterful trompe l’oeil techniques are often employed in Báez’s practice as a strategy of resistance, slipping loose the ties that bind figuration to representation. In one resplendent painting, Báez hones in on the lushness of the body, not in a didactic or anthropological sense, but as a form and a signifier. Here, the body is re-imagined as a glimmering, yet slightly surrealist, mass of life; a cell-like structure, infinitely multiplying, broken down to its most basic and life-affirming parts.

By unraveling the limitations of conventional ways of seeing, Báez seeks to destabilize the prescriptive and often violent nature of the maps she works upon. Lovingly crafting a space for those often struck from the pages of the great American story, Báez reconsiders these fraught histories through a lens of steadfast resilience and unfettered transcendence.

Firelei Báez (b. 1981, Dominican Republic) received a BFA from the Cooper Union for the Advancement of Science and Art and an MFA from Hunter College and studied at the Skowhegan School of Painting and Sculpture. Her work has been presented in many significant international exhibitions, including the inaugural installation of the ICA Watershed, Boston (2021), curated by Eva Respini, and The Milk of Dreams at the 59th Venice Biennale (2022), curated by Cecilia Alemani. Recent solo presentations of Báez’s work include exhibitions at Witte de With Center for Contemporary Art, Rotterdam; The Museum of Modern Art, New York; The Studio Museum in Harlem, New York; The Andy Warhol Museum, Pittsburgh; and Pérez Art Museum Miami. The artist has recently participated in a number of group exhibitions at major institutions, such as the National Gallery of Art, Washington, DC; Cleveland Museum of Art; Art Gallery of Ontario, Toronto; Baltimore Museum of Art; and Rockbund Art Museum, Shanghai. She is the recipient of many awards, most recently the Cooper Union President’s Citation (2022), Artes Mundi Prize (2021), and Philip Guston Rome Prize (2021).