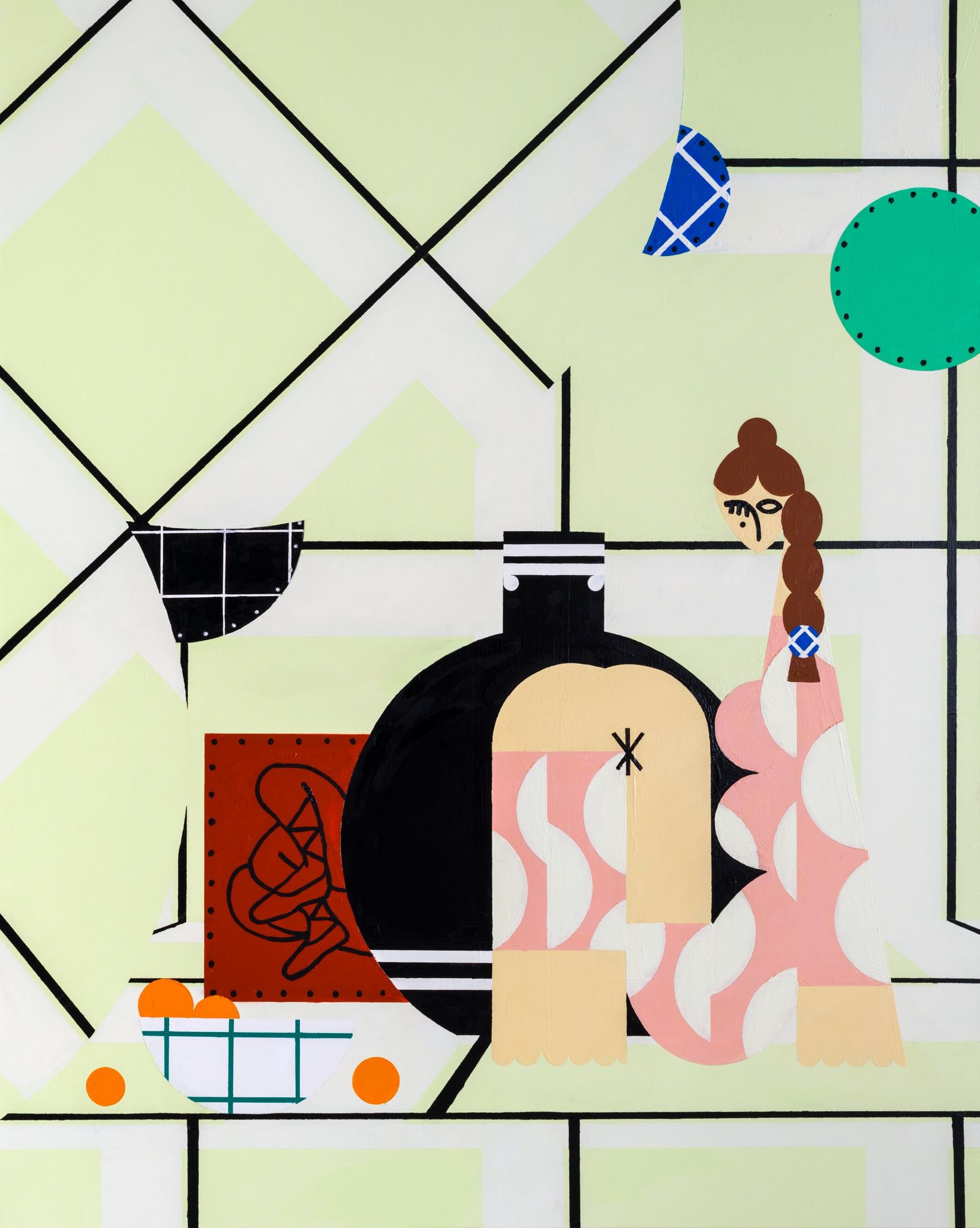 The society of the spectacle. The performance is over, or perhaps it is yet to begin. Farah Atassi’s dancers are at rest, sometimes even asleep, on a stage with a half-open curtain, not for some ballet but for other art forms. Indeed, in the center of a space lined entirely with an impeccable grid that plays almost hypnotically with the reclining dancer’s striped costume, striped paintings emerge from the decor, while on the ground a frame seems to be waiting to become an abstraction. These intersecting lines in Sleeping dancer 3 reveal other crossings, other encounters — those of painting, dance, and theater. This singular dialogue occurs again on the stage of Dancer on stage 2: next to some striped paintings strewn on the floor, the dancer, revealing her intimacy — she only wears a blouse and some slippers — lounges in the stage area, exposing an abstract, undulating decor that merges with the stage curtains. The same ripples appear in some of the colorful abstractions of the Swiss painter Verena Loewensberg (1912-1986), the only woman in the group of “Zurich concretes” (Max Bill, Camille Graeser, and Richard Paul Lohse) whose project, similar to other historical avant-gardes, had the ambition to produce an abstract plastic which would become a universal language applying to all artistic forms and fields of society, blurring the boundary between art and life. Before becoming a painter, Loewensberg was a dancer in Zurich, trained by the choreographer Trudi Schoop. In Shanghai, in front of Farah Atassi’s paintings of dancers — among them perhaps a Loewensberg — the memory of the Swiss painter’s abstractions awakens, as much because of the geometry of the decor as the use of many art forms (theater, music, ceramics, dance…). All of this leads to an image of painting which is not defined by its pure pictorial specificity but by its fertile grounding in other art history movements.

Abstraction and figuration, pas de deux. The choreography is perfect, the coordination is meticulously regulated. Neither take precedence over the other, the two protagonists complement each other with balance and harmony. The abstraction and figuration appear in this pictorial set like a couple of dancers executing a millimetric ballet. Thus the straight lines, diagonals, and semicircles make up the backgzround with a concern for formal efficiency and geometrization, to better accommodate the characters and objects dressed or covered in the same motifs. But there’s more. The modernist fable had made the pictorial abstraction an autonomous reality, existing for itself and resolutely far from any theatricality. However, in the paintings of Farah Atassi, the abstraction does not refuse a decorative or theatrical dimension. It enters the spectacle — the ballet does not take place, it remains invisible. According to a subtle chiasmus, the painting becomes theatrical by becoming part of the decor, while the scene loses its theatricality insofar as the show is not going on. Resting dancers, but a majestic choreographic figure for the history of art.