Almine Rech presents the first exhibition of Farah Atassi with the gallery. Below is an interview between Farah Atassi and Eric Troncy, director of Consortium Museum (Dijon, France) where the artist will have a solo exhibition later this year in November. 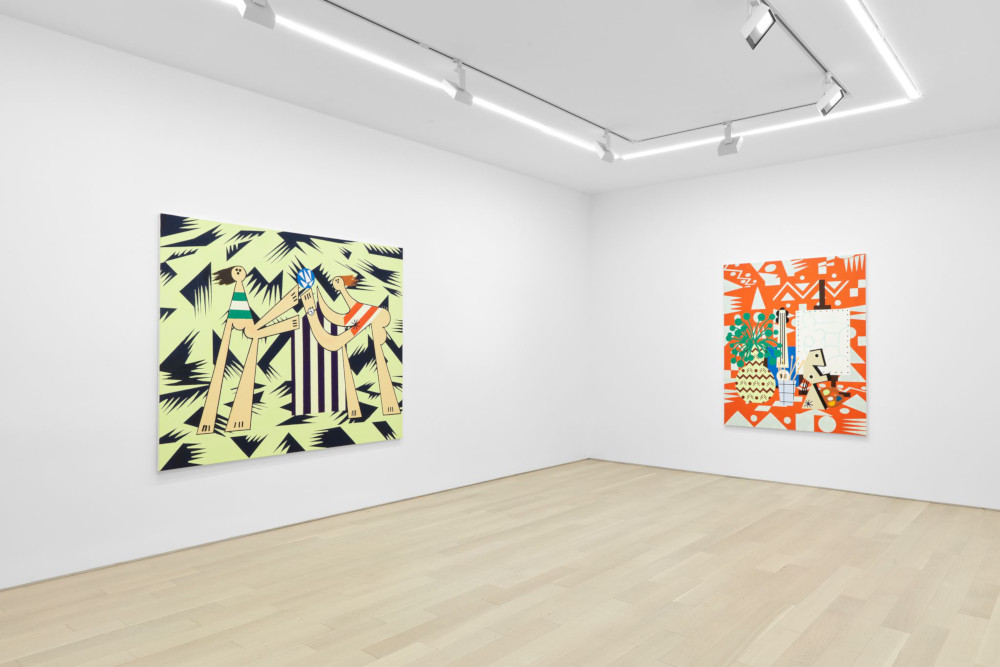 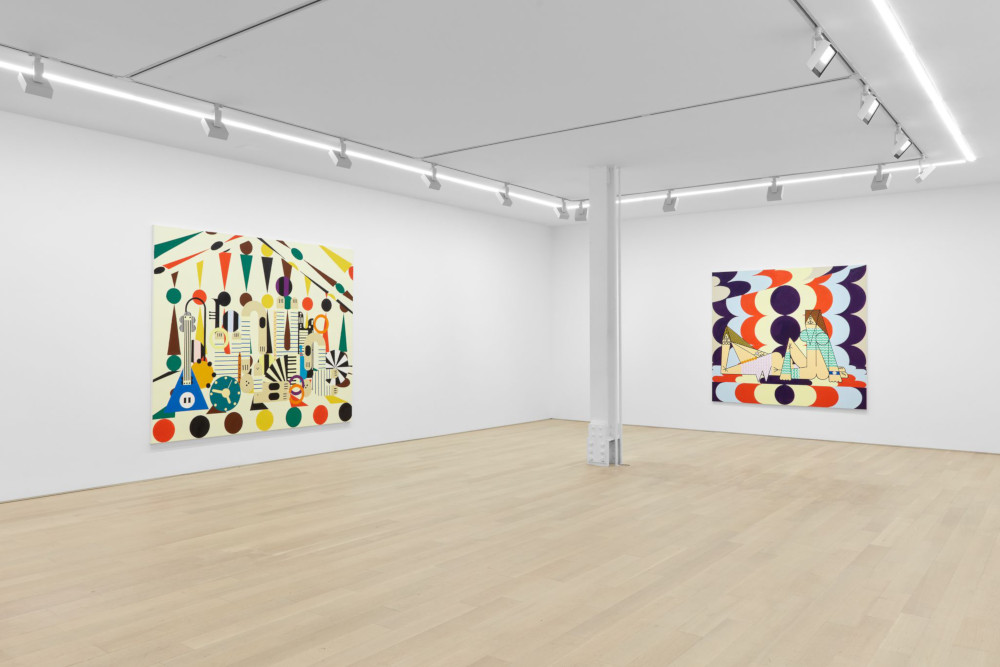 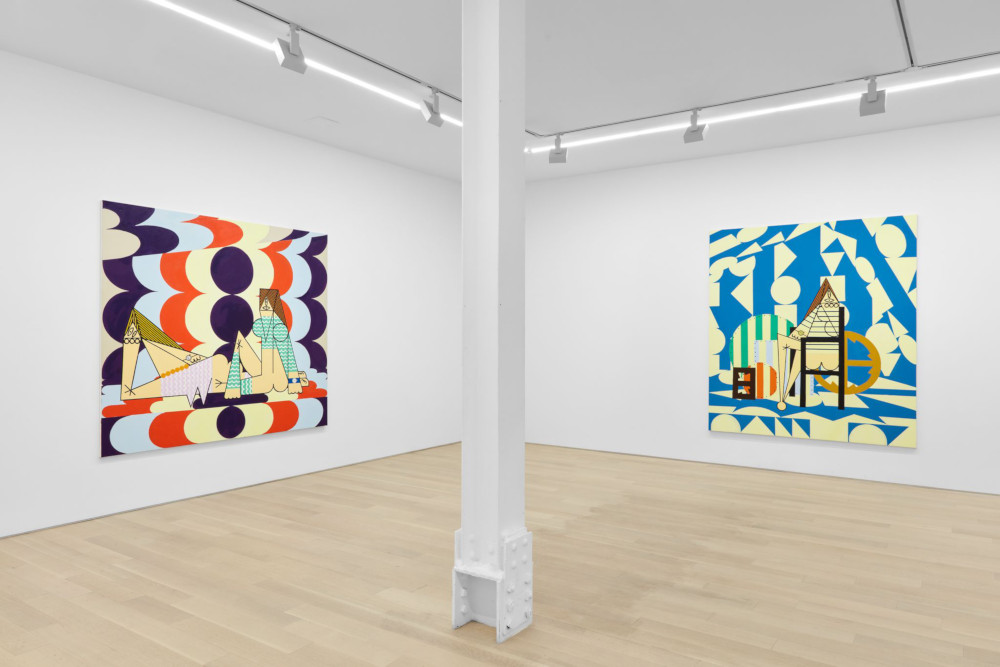 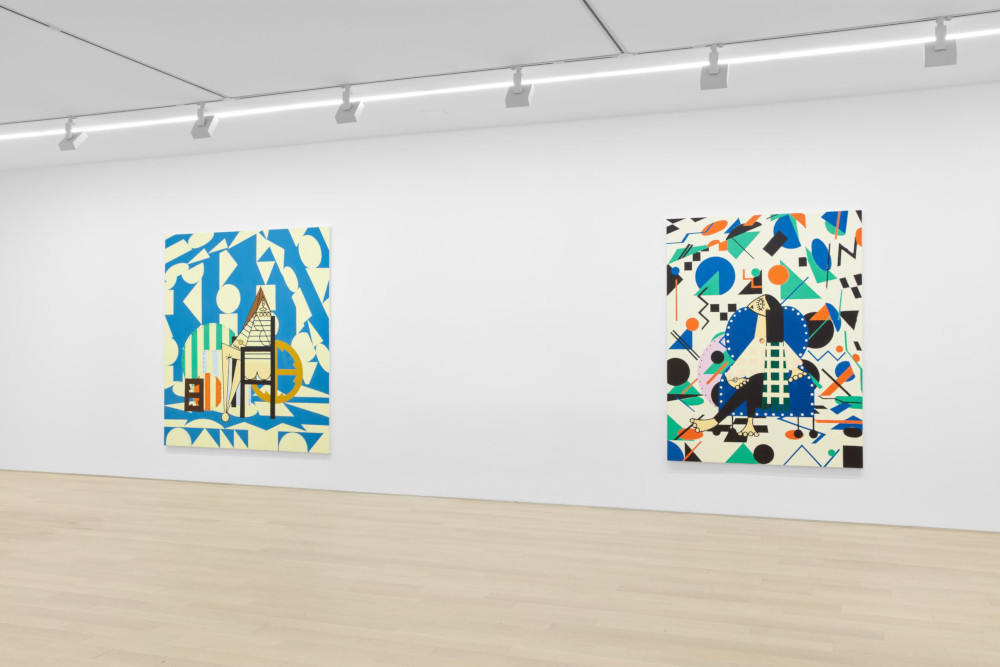 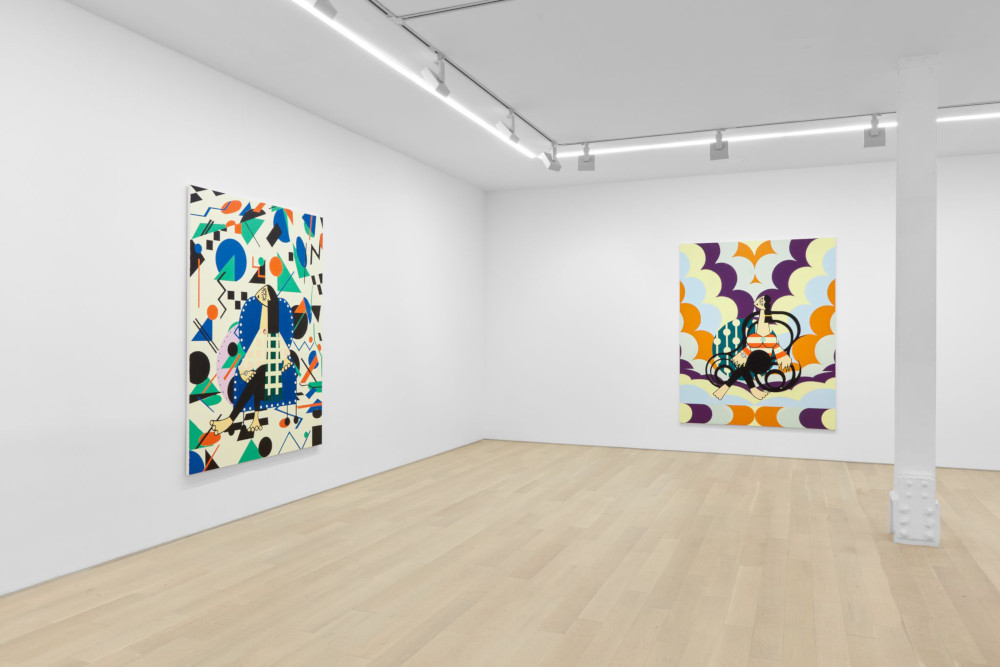 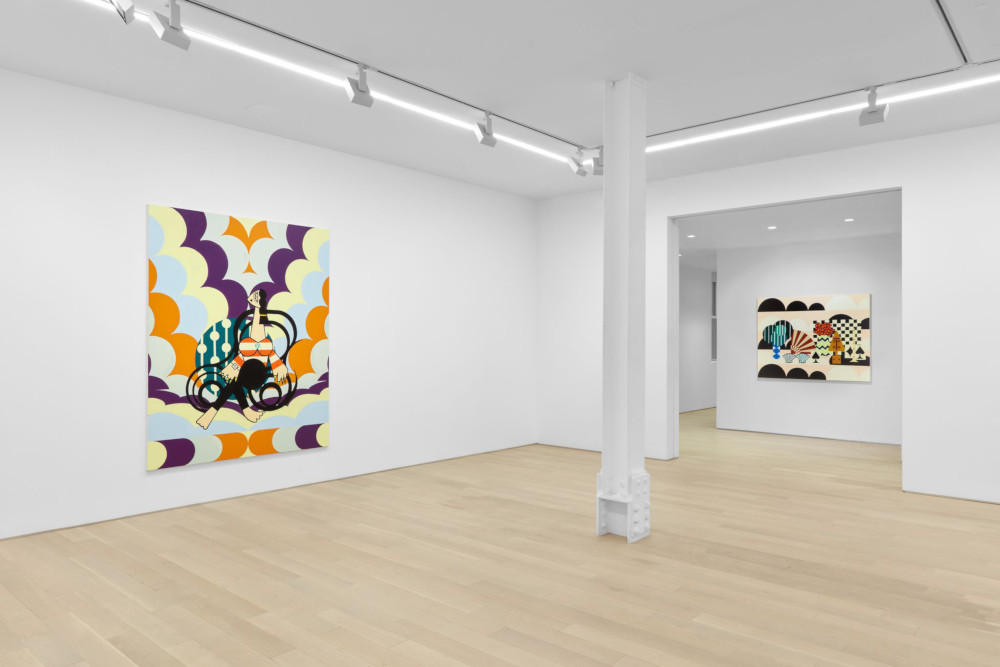 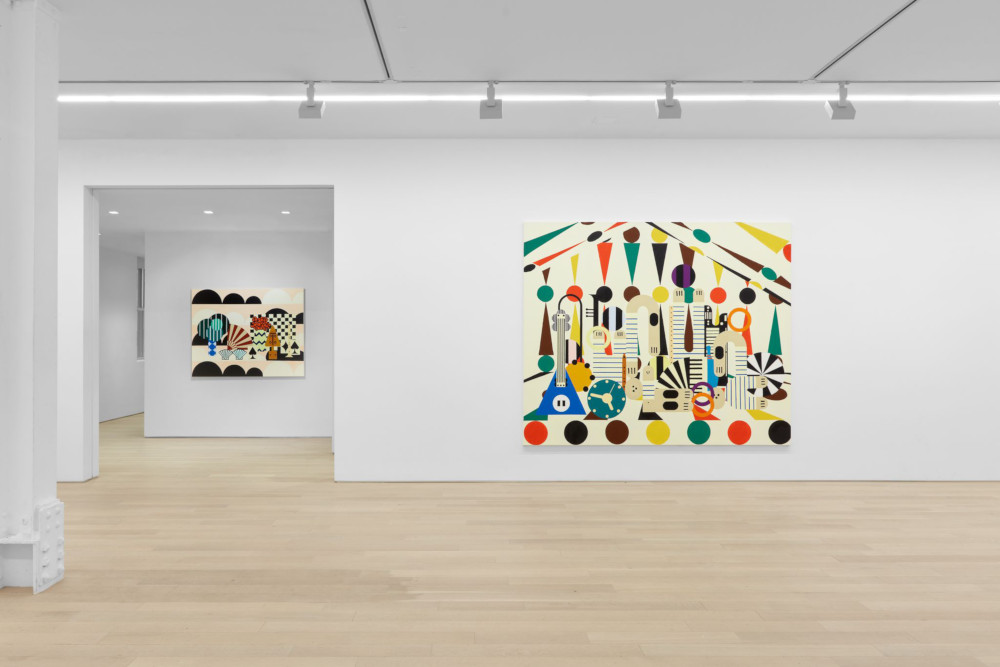 Farah Atassi: I was born in Belgium and came to Paris with my family in 1990. I was nine. At 18, I enrolled in the Paris École des Beaux-Arts and tried to find my way there. I attended workshops with Jean-Michel Alberola, Bernard Piffaretti, Claude Viallat, and Fabrice Hybert. I struggled to find my place. While studying at Beaux-Arts, I experimented with all sorts of subjects—landscapes, portraits—although my paintings were originally pretty abstract.

Eric Troncy: That list of professors you chose does show that you attended Beaux-Arts not to “do art,” but to do painting.

FA: Oh, yes. I always wanted to be a painter! I was already painting at age 13. At home, I would paint copies and still lifes. At Beaux-Arts, I experimented with different things, and although my paintings were abstract, I presented a series of landscapes for my final diploma. Space started to become important for me. In retrospect, I see that my abstract paintings were also paintings of spaces: I didn’t use white canvases; I bought pieces of materials from the Saint-Pierre fabric market. Somehow, it constantly felt like I was still doing exercises. After several years, I decided to start afresh and drop everything I had done before.

ET: Was your decision influenced by what you were seeing in galleries and museums?

FA: Not really. It was basically introspective: I couldn’t see where I was heading. Six months working on a subject, then six on another…It was enriching enough, but I didn’t know where I stood. I left Beaux-Arts in 2005 and in 2008, I kind of started from scratch. I needed a clean slate! I found this photo book of Russian community housing, old dorms, factories, disused hospitals, and the ruins of the USSR. I’m not sure what it did to me, but my paintings at the time were very colorful and even for that, I felt I had to backtrack and return to a more natural palette. I could relate to these ruined interiors, all gray and ocher, and decided to replicate the photographs. I became convinced that I had to paint structured interiors with a horizon, a ceiling: in another word, commensurable spaces. My work is pretty intuitive, and I felt the need for some sort of grid to structure the interiors (floor tiles, for instance, allowed this). The modernist esthetics with their simple and direct forms had not yet clearly emerged as crucial to my painting—things happened little by little.

ET: When we met for the first time in London, you named a whole string of inspirations for your painting—Fernand Léger, Pablo Picasso, Auguste Herbin—which deliberately positioned you much more in a remarkably ambitious story of painting than in “contemporary art.” This is pretty obvious in the series of paintings you have made for your exhibition at Almine Rech New York.

FA: Two years ago, I started using psychedelic motifs for an exhibition in Los Angeles. Was it the geographical context? I don’t know, but I became interested in New Age and psychedelic esthetics to combine them with cubism: cross-fertilizing esthetics that seem incompatible. I relish anachronistic, quirky and rhyming effects too. For example, the pattern in a background might evoke Malevich, or perhaps fabrics by Pucci or Missoni, or even post-modernism. Some of my characters’ feet are inspired by Picasso motifs. But these references are absolutely not intended as private jokes for viewers who know.

ET: It certainly doesn’t feel that way. It feels more like elements of grammar articulating a language. They do not seem to have been brought together in an artificial collage. It all flows freely, almost naturally!

FA: It is a vocabulary indeed. These shapes are integral parts of the different shapes around me like those of certain objects. In the construction of pictorial language, they should be taken for their universal and timeless nature. This’s lingua franca.

ET: So when I see green and red stripes in the piece titled Model in the Studio II…

FA: You’re right to be reminded of Daniel Buren, absolutely. It’s a metalanguage, and the strong presence of matter indicates that this is not just an image, but actual painting.

ET: Indeed, and photographs of these paintings could—like the photographs of Mondrian paintings—refer to graphic arts more than to paintings. Face to face with the real work is, as with Mondrian, radically different when you can also see the painterly material; its aging; its cracks; and its imperfections. All of sudden, it ceases to be a question of image and becomes something much more carnal. How did you come up with this exhibition?

FA: The paintings are direct extension of what I have been experimenting with for the past two years. I have explored the classic subjects of paintings: still life; female nude; musical theme; and studio. I always start by defining a space with a roof, a horizon and a first step that sets the scene, or rather, a stage for my performance. Theater stages and sets, on which I then place figures or compositions, unfold with a grid formed by their vanishing lines. The next step is to “rhyme” the figures and the background.

ET: But it’s a theater without dramaturgy, no shadow or light to model the scene.

FA: I’m looking for the right level of artificiality to allow sufficient freedom. I do figurative paintings with an abstract painter’s language: the foundation of my work is geometric shapes. From a strictly formal point of view, I acknowledge Cubism as a source. I’m obviously not alone in admiring Picasso. His models, wives or mistresses, were also influenced by the desire he had for them. For my part, I try to paint models as objects without the libidinous aspect. I try to make the figures come true, but without the pathos. Matter, however, is vibrant: it embraces its own repentance, sometimes its thickened impasto. The painterly substance is what drives emotion.

ET: Your painting fully accepts its admiration for the 20th century, without a care for the clichés and gimmicks of contemporary painting. No silkscreened backgrounds, no use of digital printing or computer language.

FA: Modern painting had a sense of the “absolute,” which I feel was subsequently lost, or at least dissolved into surface effects. With exceptions, of course—Hockney, for instance, whose work I find fascinating.

ET: You address issues of time. Why are there so many clocks in this series of paintings?

FA: I like the idea of time passing. It’s also a highly effective and graphic motif. But yes, there are women with watches and clocks, which are also focal points for the gaze, like brooches on a garment. I construct these paintings “brick by brick.” It’s a pretty long process, and the focal points come late in the process.

ET: Four of the paintings for this exhibition are female nudes, and there are many still lifes. Our age is one of talkative painting with lots of things to say about the world around us—quite the opposite of what a still life does!

FA: I’m well aware! But this painting project is based on stereotypes allowing formal explorations. I hope my paintings are not seen as telling a story head-on: narrative painting is really not my cup of tea. However, I do hope they can question the history of painting with truly contemporary aspects.

ET: I fully agree with you! Being contemporary isn’t a question of reiterating proof of your contemporaneousness or offering the viewer indisputable guarantees. It’s definitely not that simple. You can’t just paint a data center or evoke social media to get with the times; Cézanne gave ample proof of this with mere apples.