Art starts with transmutation and continues with metamorphosis.
– Henri Focillon 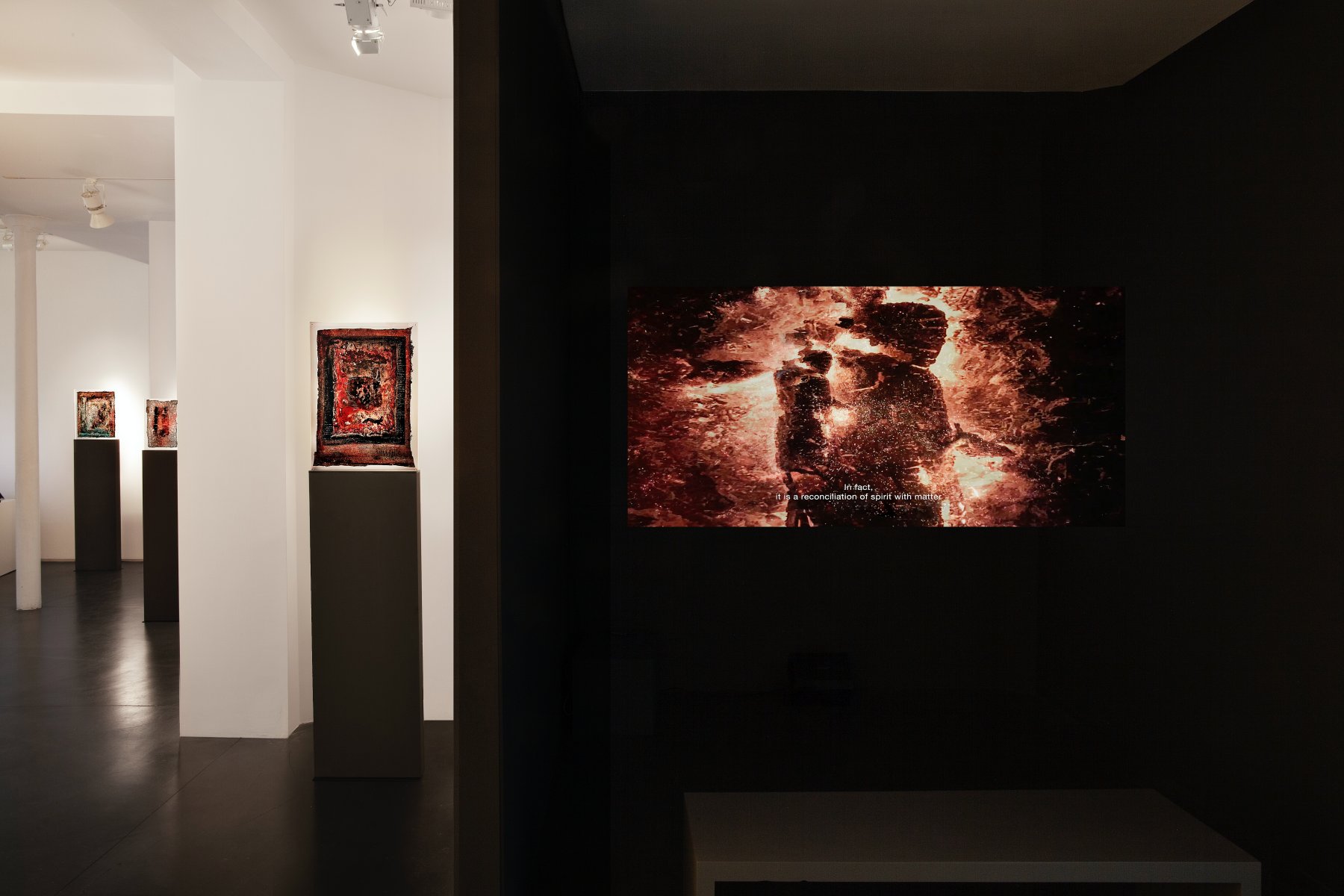 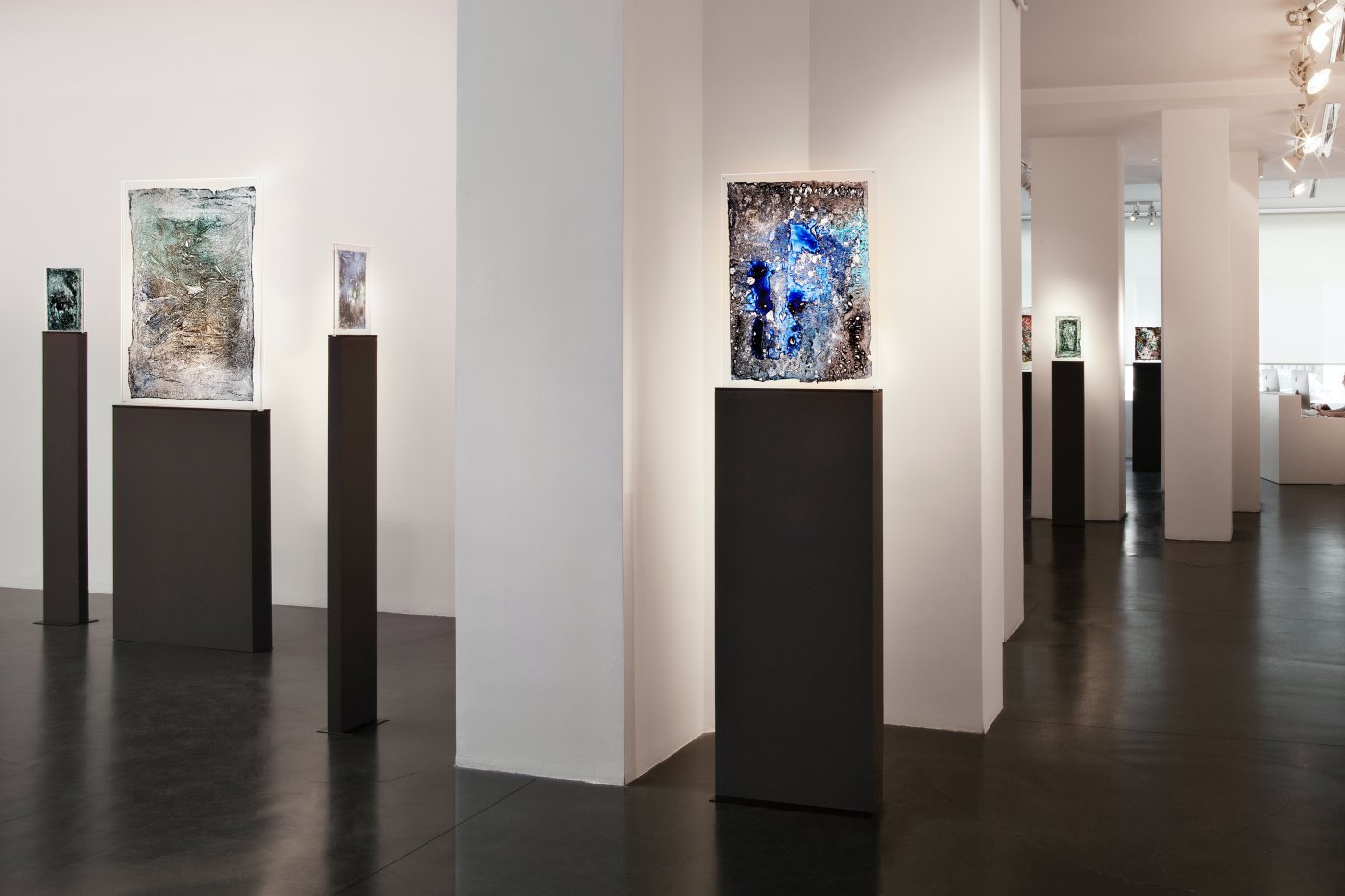 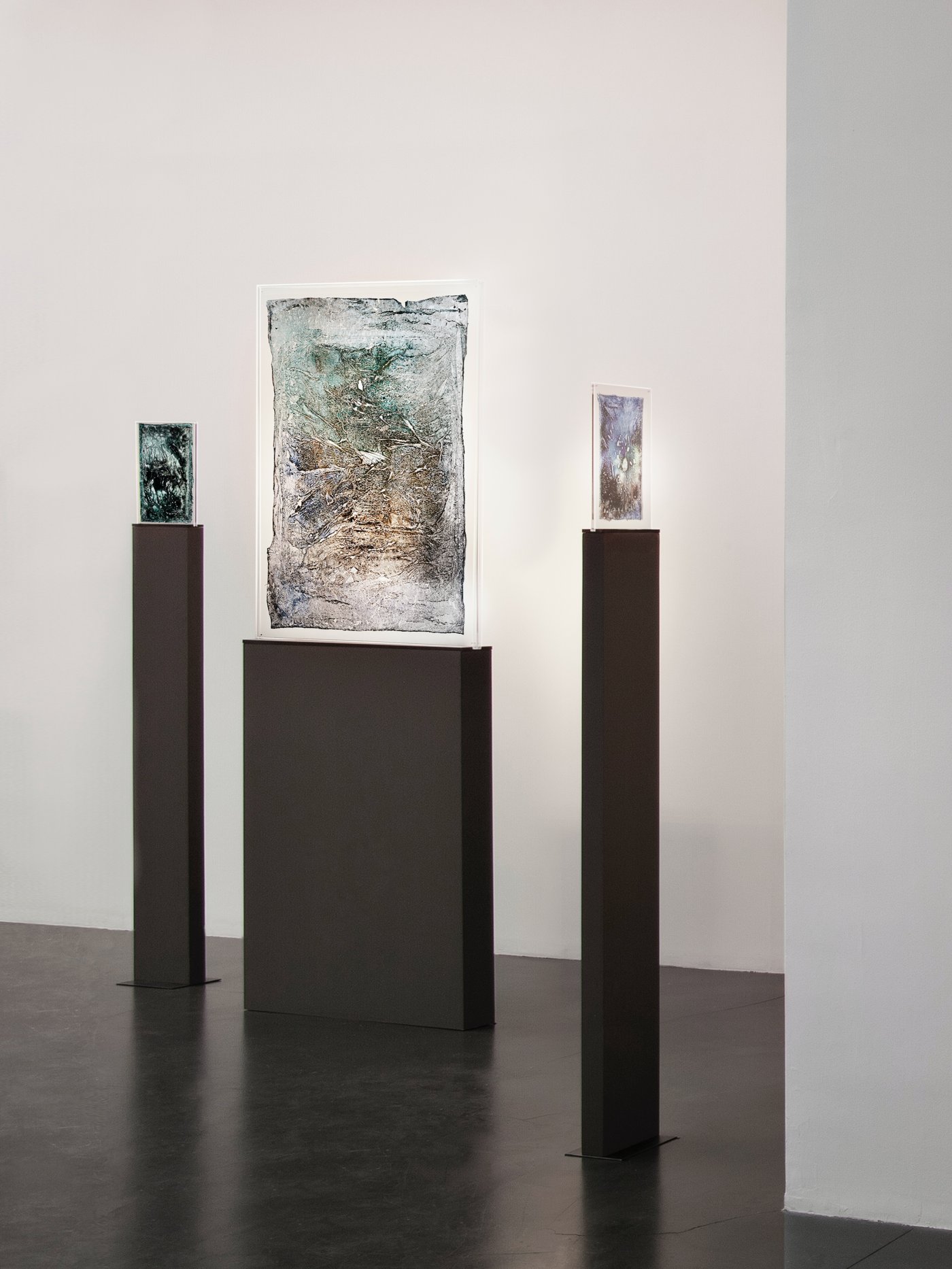 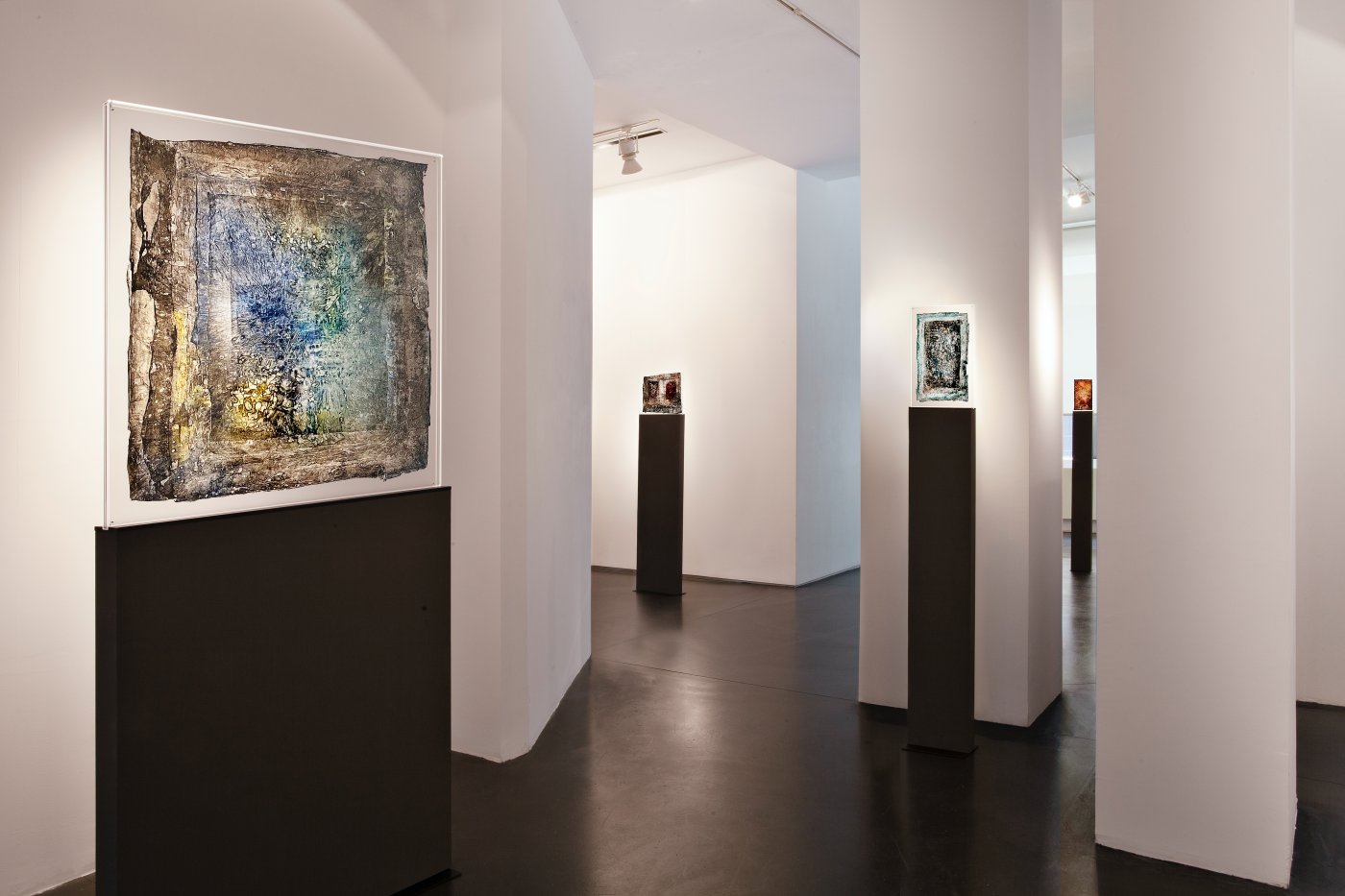 Whether it be a stone erected on the side of a path, a funeral monolith, or a votive piece of wood, a stela has the beauty of a written page, the enigmatic presence of a decisive encounter; it is also Latin for star.

Evi Keller’s stelae are radiant fragments of a Whole in a state of perpetual becoming, Matière-Lumière, a work that is a true world. For several years the artist has been working on her own, like the anchorite monks meditating in the folds of a grotto, entirely devoting herself to this long-haul endeavor that is Matière-Lumière. Treading the path of a few elders, Joseph Beuys and Mark Tobey among them, (one also seems to glimpse Fautrier’s Otages, or some paintings by Sam Francis), Evi Keller magically transforms external materials into actual substances, she gathers together scattered pieces of a diffracted world, the infinitely small and the infinitely large.

With her, art is no longer a game, a provocation or a performance; it renews an ancient practice, the transmutation of elements. According to Henri Focillon, the artist who enters deeply into the mysteries of Creation “builds herself a physics and a mineralogy, she is first and foremost a craftsperson, her palms are black and torn from tackling weighty and burning matter.” Indeed, if Evi Keller’s works incorporate painting, photography, sculpture, and video, they do not belong to any known genre. These Saturnian and solar pieces are, above all, pieces of matter transfigured by light, simple lead transformed into gold.

From such ancestral civilisations as those of Babylon, Assyria, and China, Evi Keller recaptures the sacred function of the threshold and the passage. Instituting sacredness starts with defining a limit, establishing a transitional space (door, column, arch, peristyle), and inquiring about sensitive places where one can feel the influx of things and beings.

Evi Keller erects stelae on our path and invites us to penetrate into another space, another time.

Come closer: these are miniature, burning worlds, twigs, barks, bones, spider webs, features from a face, starry patches of sky. These vibrating, living surfaces might evoke Victor Hugo’s cosmic inks, or, more definitively, the wall smeared with water stains and full of colored stones that Leonardo da Vinci recommended painters to contemplate in order for them to see on it all possible figures, battle scenes, rivers, trees, and mountains.

When he first saw the Forest of Stone Steles, Victor Segalen recognized the work of the Han civilization in these pieces of wood erected on either side of the pit to allow for the burial of a coffin. A thousand years before, stelae were wooden sacrificial poles that were also destined to measure, with the passing of the shadows, the moment of the sun. Not the external light, but the revolving inner light; the “star is intimate and the instant perpetual,” Segalen wrote.

For, in the graves of the Ancient Greece initiates, small delicate gold leaves could be found engraved and folded in two, with instructions for the trip beyond. Upon deciphering the texts incised into the material, one discovers that they concern the Mnemosyne spring from which outbound souls must drink. Here are a few lines from a third century B.C. leaf discovered in Crete, a secret poem about the soul:

I am burning from thirst and am faint: please give me
a drink of the water from the source that flows perennial, to
the right, where the cypress is. — Who are you?
Where do you come from? — I am the son of the Earth and
the starry Sky.

On these stelae — burning pages overcome by an interior fire, thin layers of blueish ice, where a stain of blood sometimes darkens — Evi Keller writes the memory of the primordial elements, the water from springs and rivers, the subterranean fire, the air in the sky. This memory links our body of water and carbon to the furthest stars of the galaxy.

It is an ancient voyage, though one that has just begun.

Olivier Schefer is a writer and a philosopher. He teaches Aesthetics at the Université Paris I Sorbonne.
A translator and interpreter of Novalis, he devotes his research to the artistic and spiritual resonances of German Romanticism.

The gallery is pleased to present a new solo exhibition of the German artist Evi Keller. Her work questions the cosmic principle of the transformation of matter by light.

The imprints of the moment [sculptures, paintings, photographs, videos, sounds and performances] reveal a process of substantialisation, which is gradually embodied and transfigured in installations that the artist designates as transitional spaces.

This journey through these spaces has guided the artist towards Matière-Lumière creations testifying to the anthropocene. Consisting of carbon born in the stars, the essential nucleus of all living matter and recycled by man, these works are animated and transmuted by absorption, transmission and reflection into changing materials in the interaction with the spectator. Through an alchemical process Evi Keller thus transforms the memory of hundreds of millions of years into into pieces of art. The artist unveils, for the first time, Matière-Lumière during the Paris Nuit Blanche 2014. From the beginning of 2015, the Gallery has offered a collaboration to the artist, with a first large-scale solo exhibition from May to September 2015, a presentation of her works in exhibitions in France and abroad, and at fairs such as the FIAC, Art Dubai, Art Brussels. The same year, the Maison Européenne de la Photographie presented the photographs and the audiovisual work Matière-Lumière [Towards the light-silent transformations], which then became part of the institution’s video art collection. A conference was devoted to the intersecting views on the works of Joseph Mallord, William Turner and Evi Keller on the occasion of the Les Lumières de la Vie series organized by the University of Paris Diderot.

On the occasion of the closing ceremony of the Year of Light at the Hôtel de Ville de Paris in February 2015, the artist was invited to project an audiovisual work at the end of Hubert Reeves’ conference Giving People Back the Sky. The following year, an installation Matière-Lumière is presented at the Centrale for contemporary art in Brussels (exhibition Connected, March-August 2016). As part of the exhibition of his works at the Musée des Arts Décoratifs (Le Contemporain Dessiné from March to June 2016), the conference La matière au delà du visible is given around Jean Dubuffet and Evi Keller. In 2017, philosopher and curator Joke Hermsen chose key works by Evi Keller for the exhibition Château Kairos at Gaasbeek Castle in Belgium (April-June 2017), alongside Nicolas de Staël, Dani Karavan, Georgia Russell, Anri Sala, Hans Op de Beeck, Pipilotti Rist, Chiharu Shiota, Otobong Nkanga, Antony Gormley and Susumu Shingu. The artist also participates in the exhibition Passion of Art. Jeanne Bucher Jaeger Gallery since 1925 at the Granet Museum in Aix-en-Provence (June-September 2017), alongside Paul Klee, Vassily Kandinsky, Alberto Giacometti, Max Ernst, Nicolas de Staël, Mark Tobey and Jean Dubuffet.

Over the past few years, the artist has also regularly collaborated with contemporary dancers and musicians.

In 2018, Evi Keller chose to devote herself entirely to the creation of a monumental installation, the Performance/Matière/Lumière (presented for Nuit Blanche at Église Saint-Eustache). In an initiation ritual in the tribal sense, the artist welcomes the spectator at the heart of the intimate and personal experience of the multiple visions of transmutation of matter through light. Light, spectator and artist interact in a transitional space to live in an instant through a few billion years.