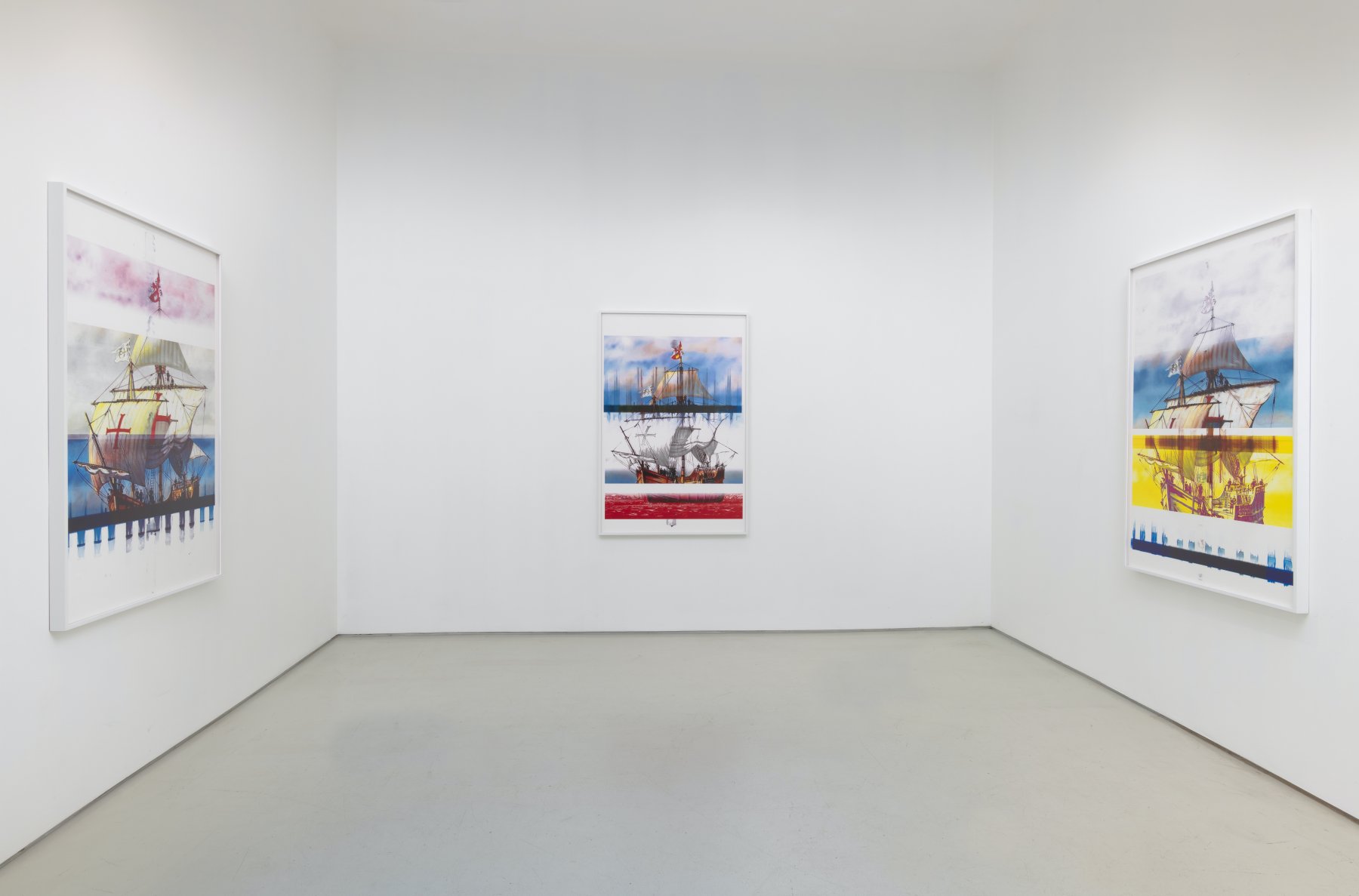 Evan Trine’s new body of work continues his exploration into using traditional photographic tools to manipulate a variety of recognizable source materials. His newest series “Ships” utilizes the iconic image of Columbus’ sailing trio – the Niña, Pinta and Santa Maria – as a stand-in for a set of American cultural symbols that are currently being contested and re-evaluated for their historical whitewashing.

By physically altering the print as it leaves the printer, Trine imitates the process the viewer engages with and ultimately expunges culturally-entrenched internalized ideas, values and patterns of behavioral modes currently being dismantled by and within contemporary society. A response to the collective cultural amnesia about the contingency of historical memory, the effect is one of disorientation – both historical and immediate – in the face of radical transformation.

Evan Trine (b.1988) lives and works in Long Beach, CA. He attended Azusa Pacific University (BFA) Claremont Graduate University (MFA.) This is the artist’s third solo show with the gallery.

“Niña, Pinta, and Santa Maria” is a phrase I heard hundreds of times in elementary school. It was cemented into my brain, and went alongside the narrative of the heroic journey that Christopher Columbus took in 1492 to discover the New World. This image was perpetuated throughout my youth in school and in movies – a trio of massive, fantastic ships, leaving on an expedition to the unknown. They discovered a new place. They formed a peaceful relationship with savage people and taught them civility. And 500 years later, we are living here in America, and we have Christopher Columbus to thank. But this narrative isn’t accurate. It doesn’t paint a complete image. And just like many other cultural icons, it’s being reassessed, amended, and transformed.

This body of work, which I’m referring to as “the ships”, began with a process I’ve been developing over the last three years. By carefully replacing and rearranging the computer chips and ink cartridges in my photo printer, I can confuse the printer into believing it’s creating an accurate image. I manipulate the paper as it feeds through the rollers, holding the paper so it can’t advance, stalling it for a few seconds or a few minutes, wrenching it backwards, pulling it quickly forwards again – over and over until the error indicator light tells me I need to unplug the printer, restart it, and try again.

I send the same paper four, five, or six times through the printer, each time repositioning and removing different ink cartridges. The combination of inks creates a truly irreproducible product – an inherently unique print. The process feels like painting, each pass through the printer creates another set of marks that I evaluate and calculate the next move accordingly.

My direct disruption of the print is a physical representation of the shift that is happening around these cultural symbols. It’s through this technique that the image is being reevaluated. It mimics the process we are going through as a society to reconsider ideas that we’ve held for too long.