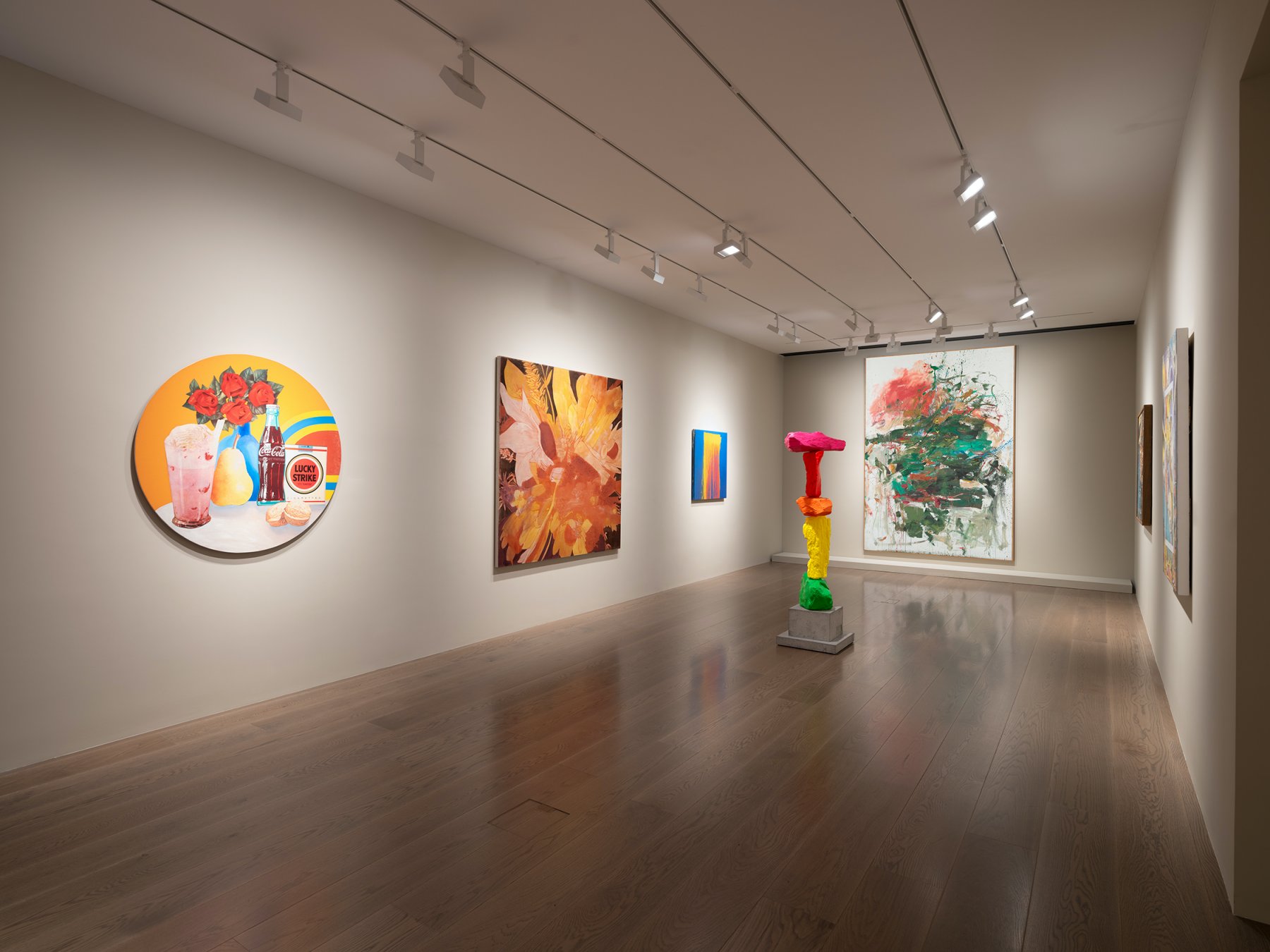 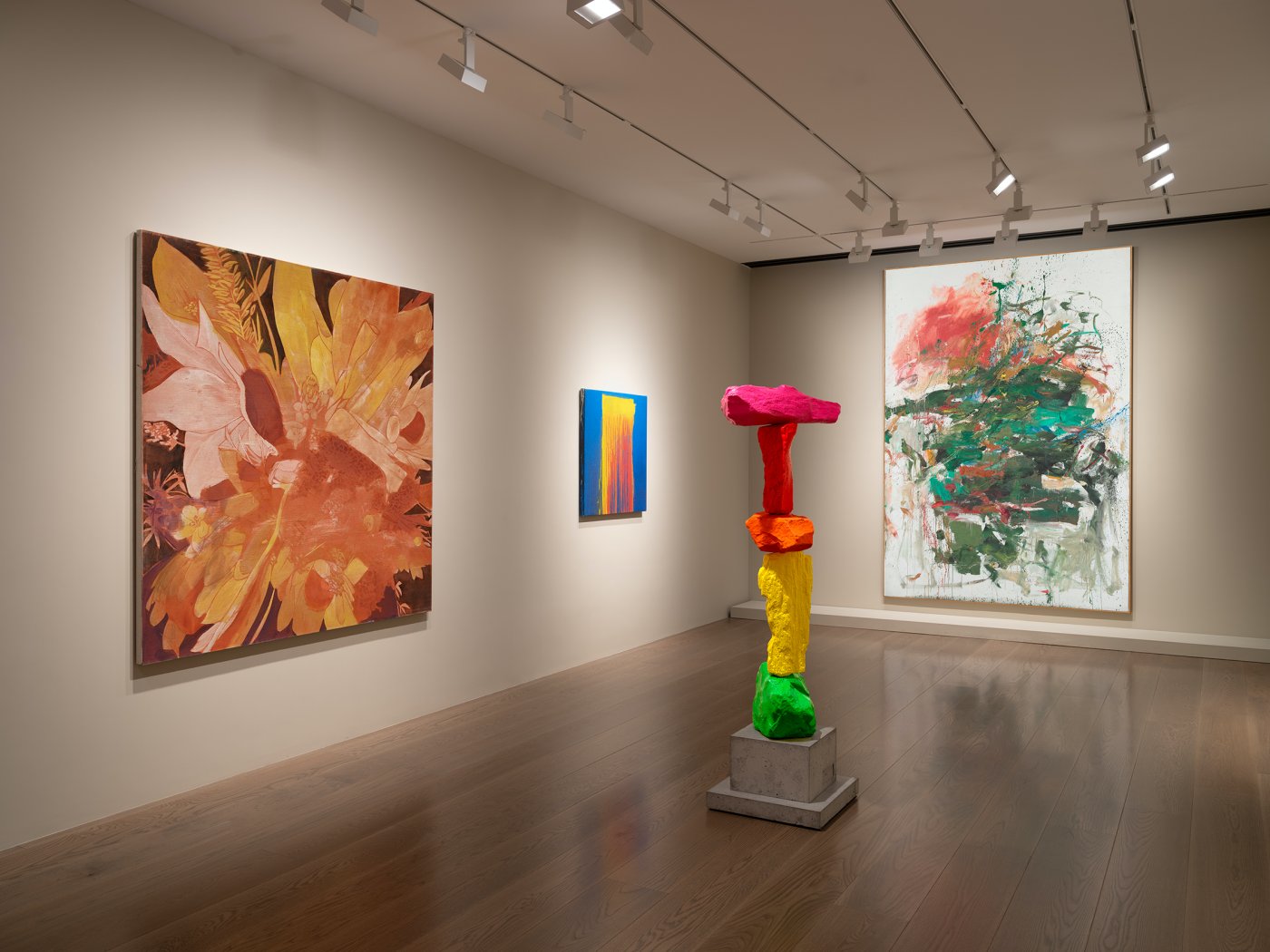 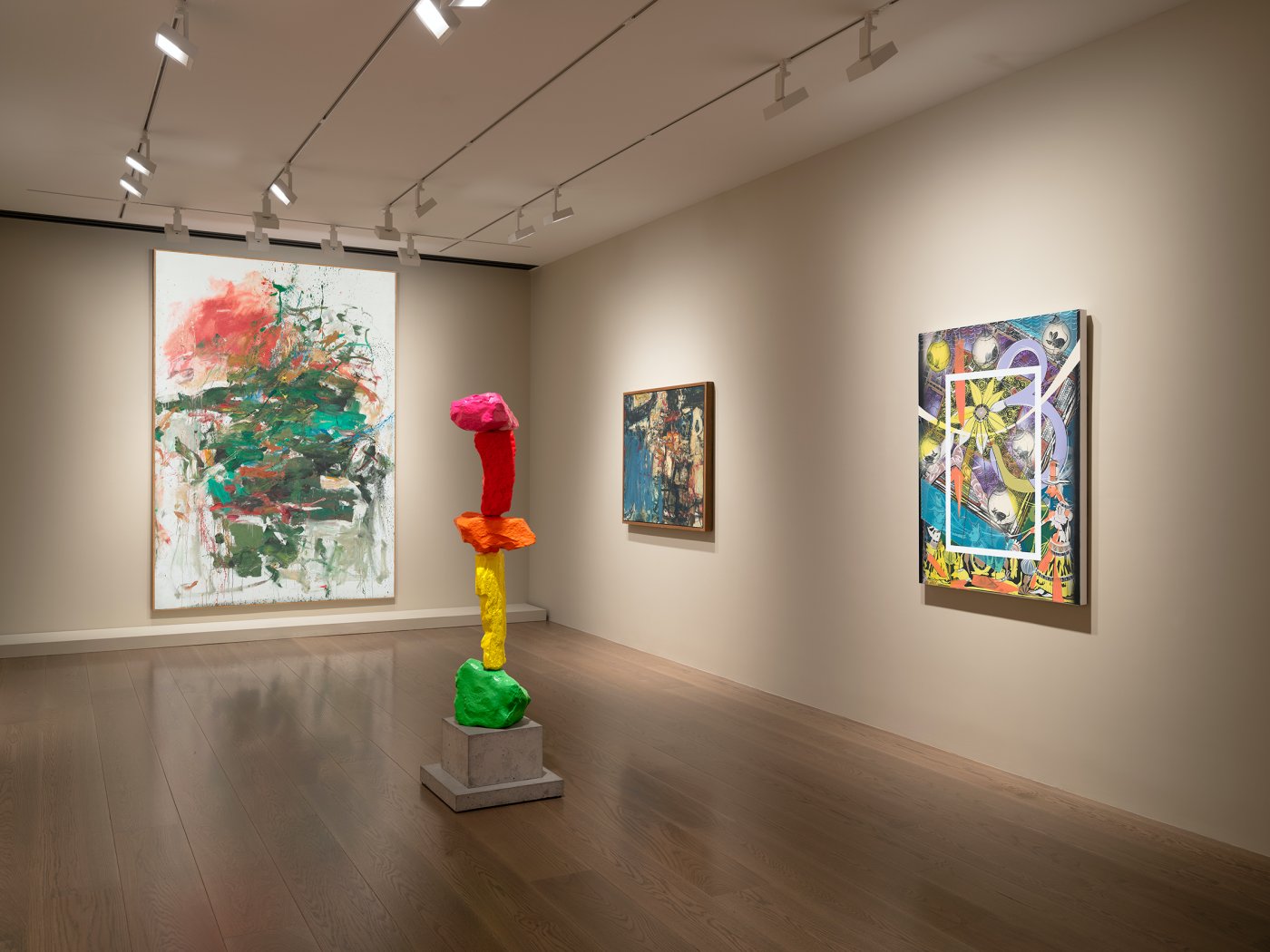 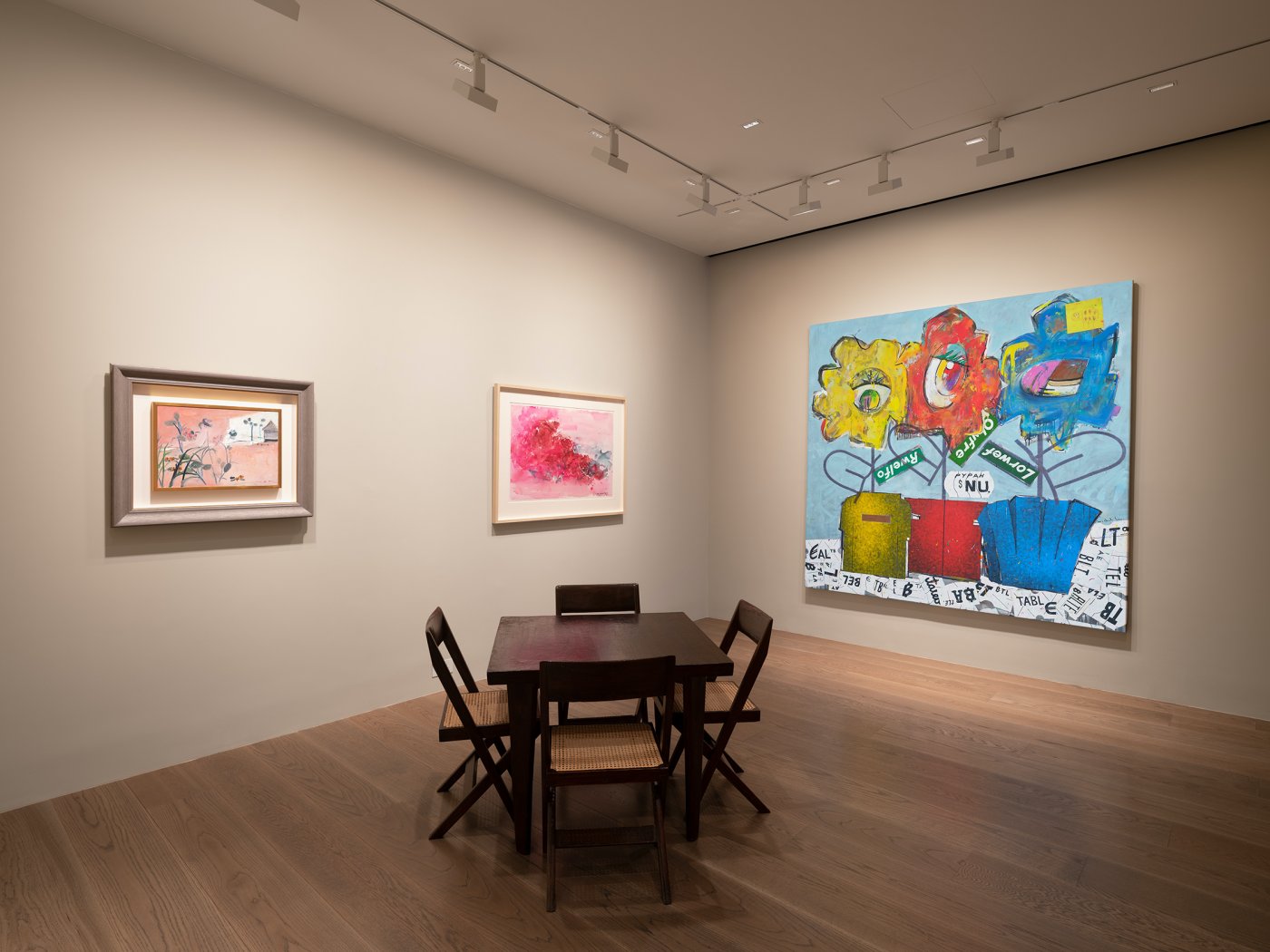 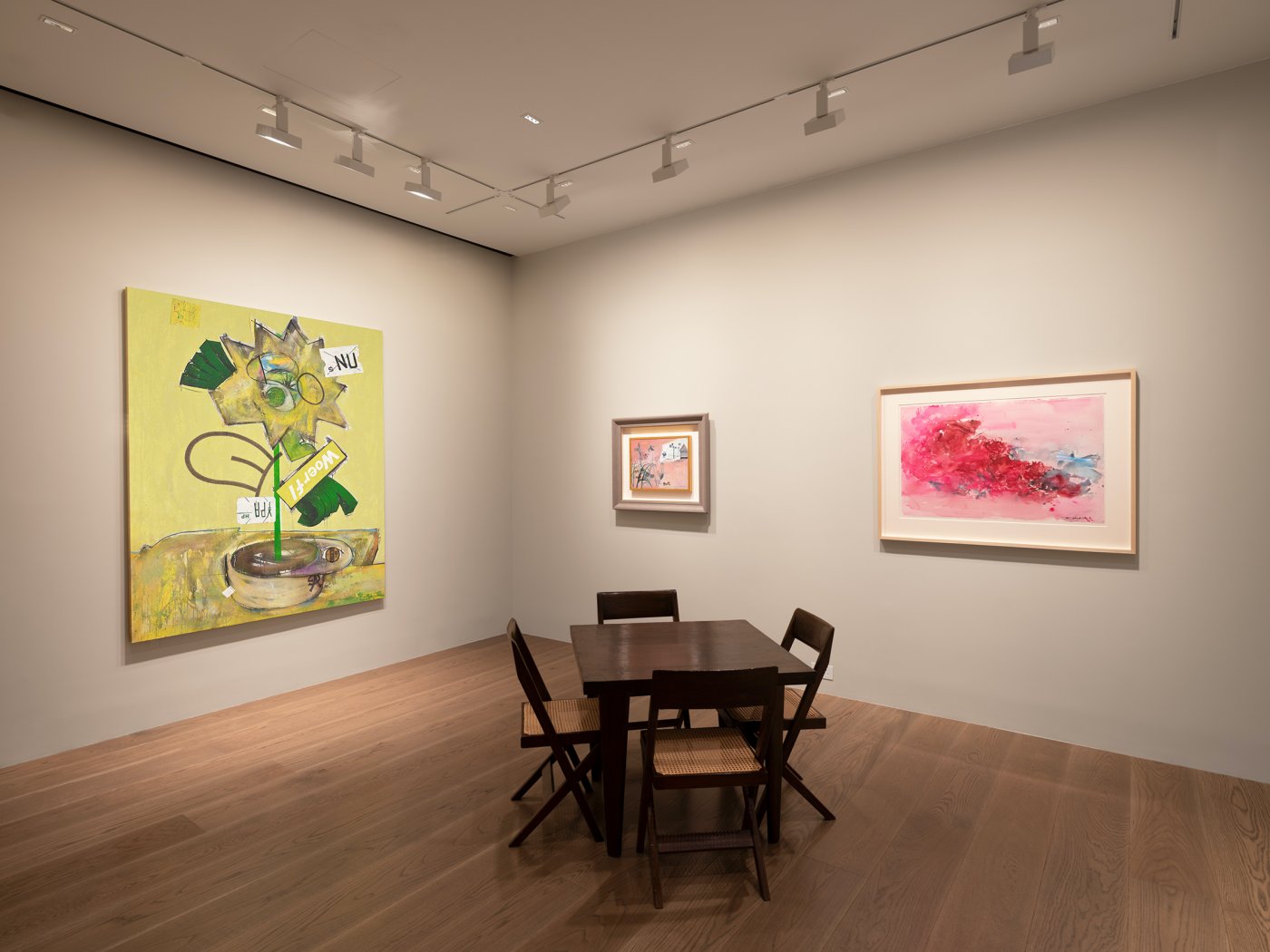 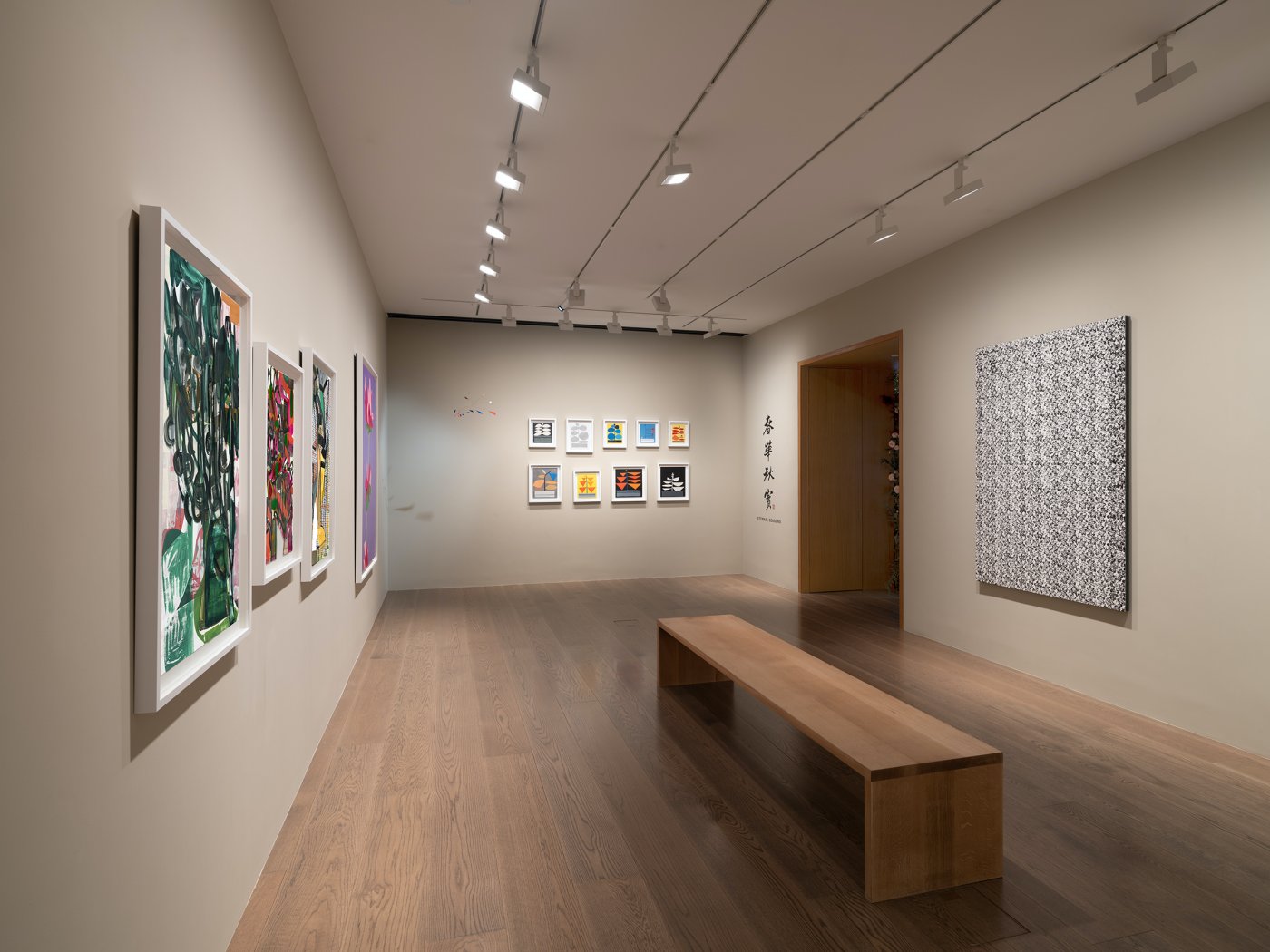 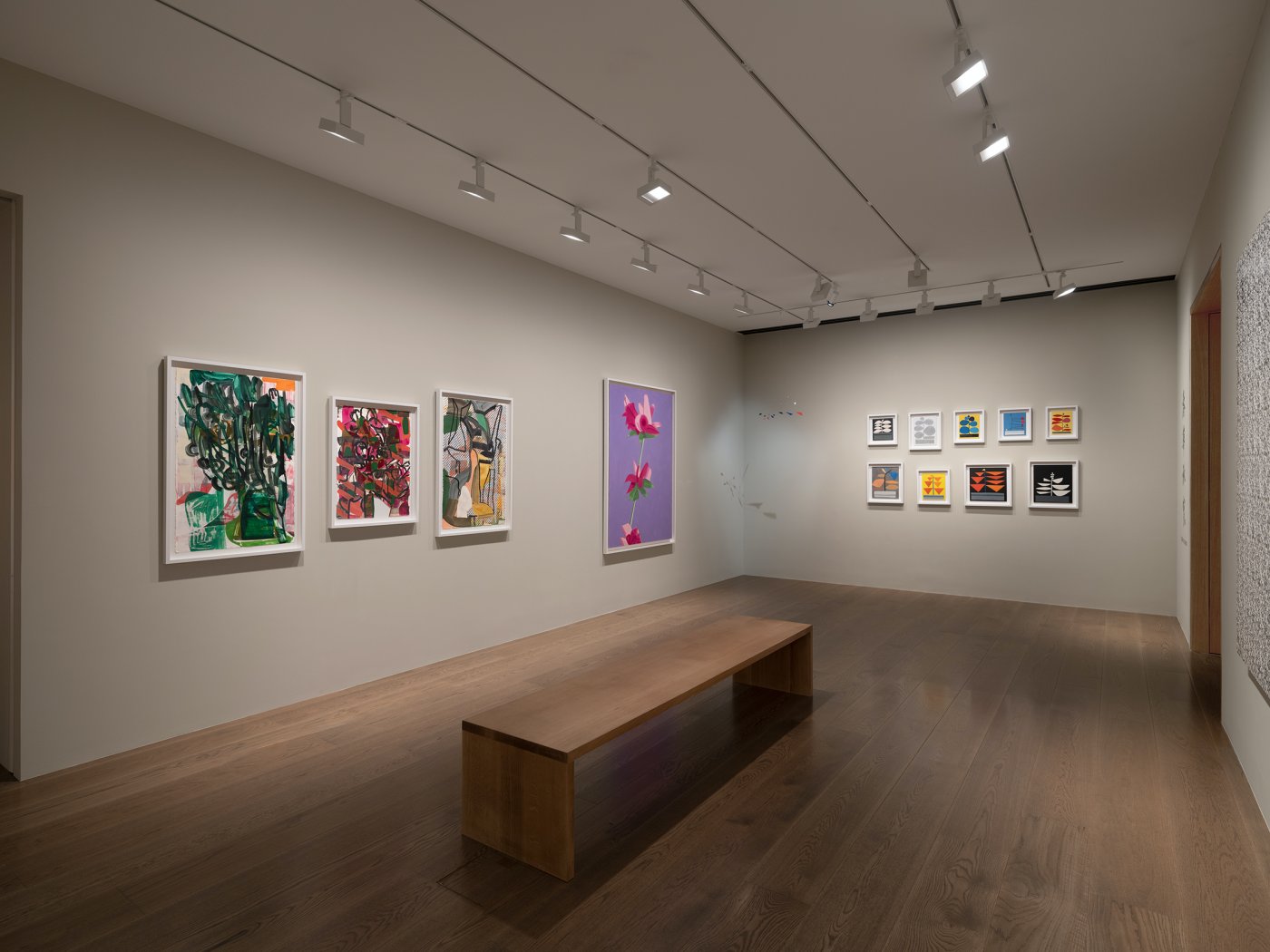 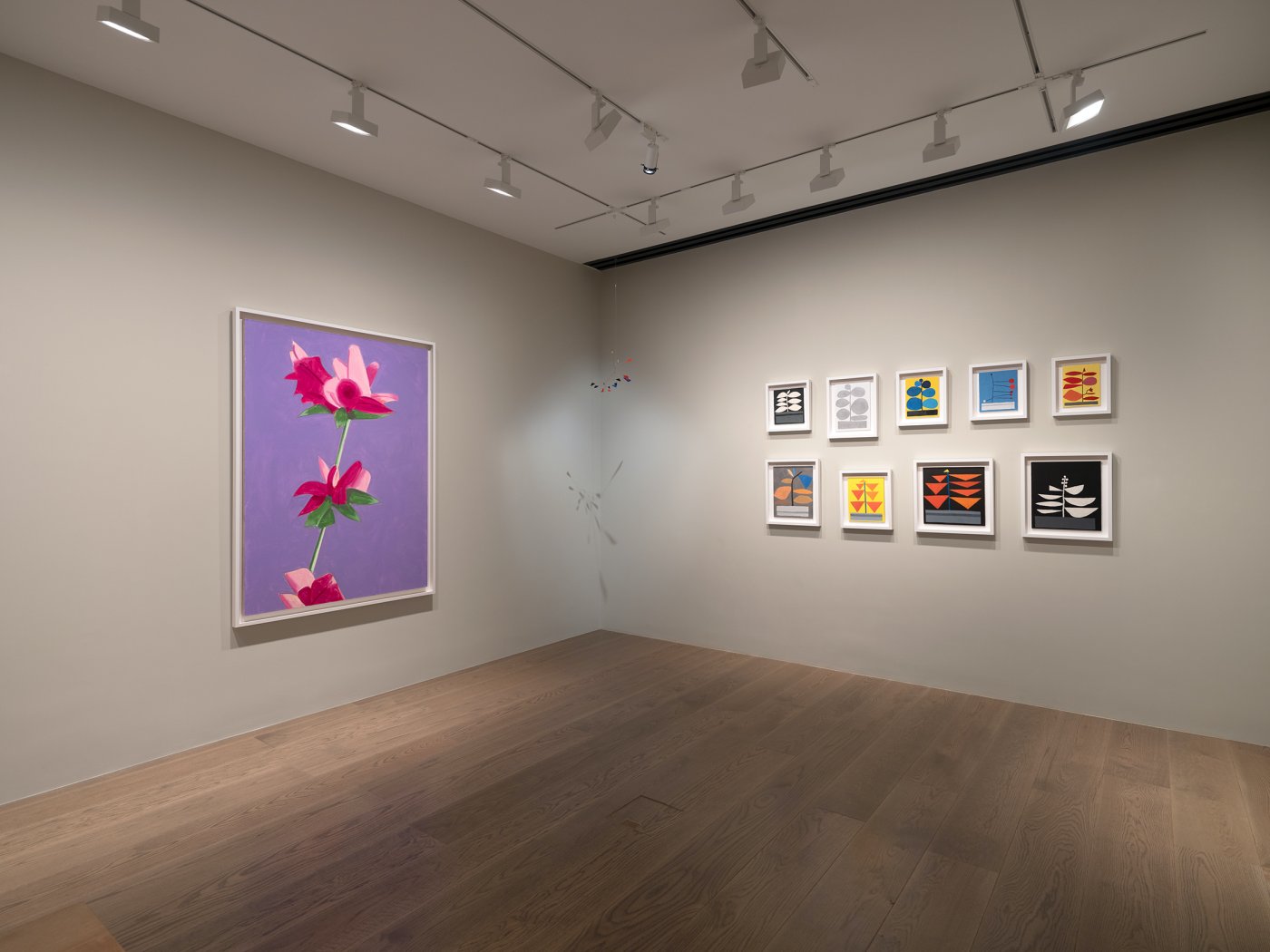 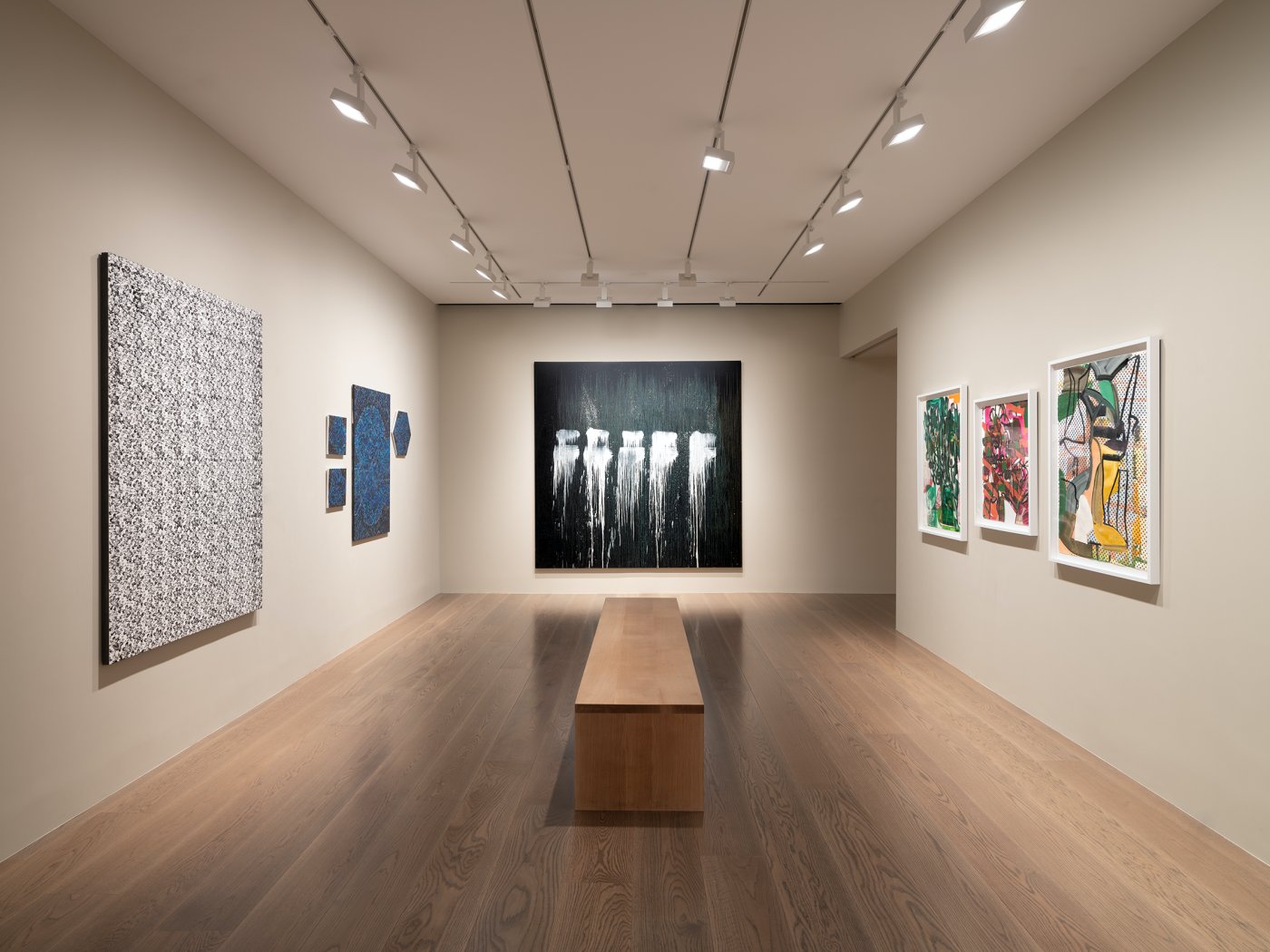 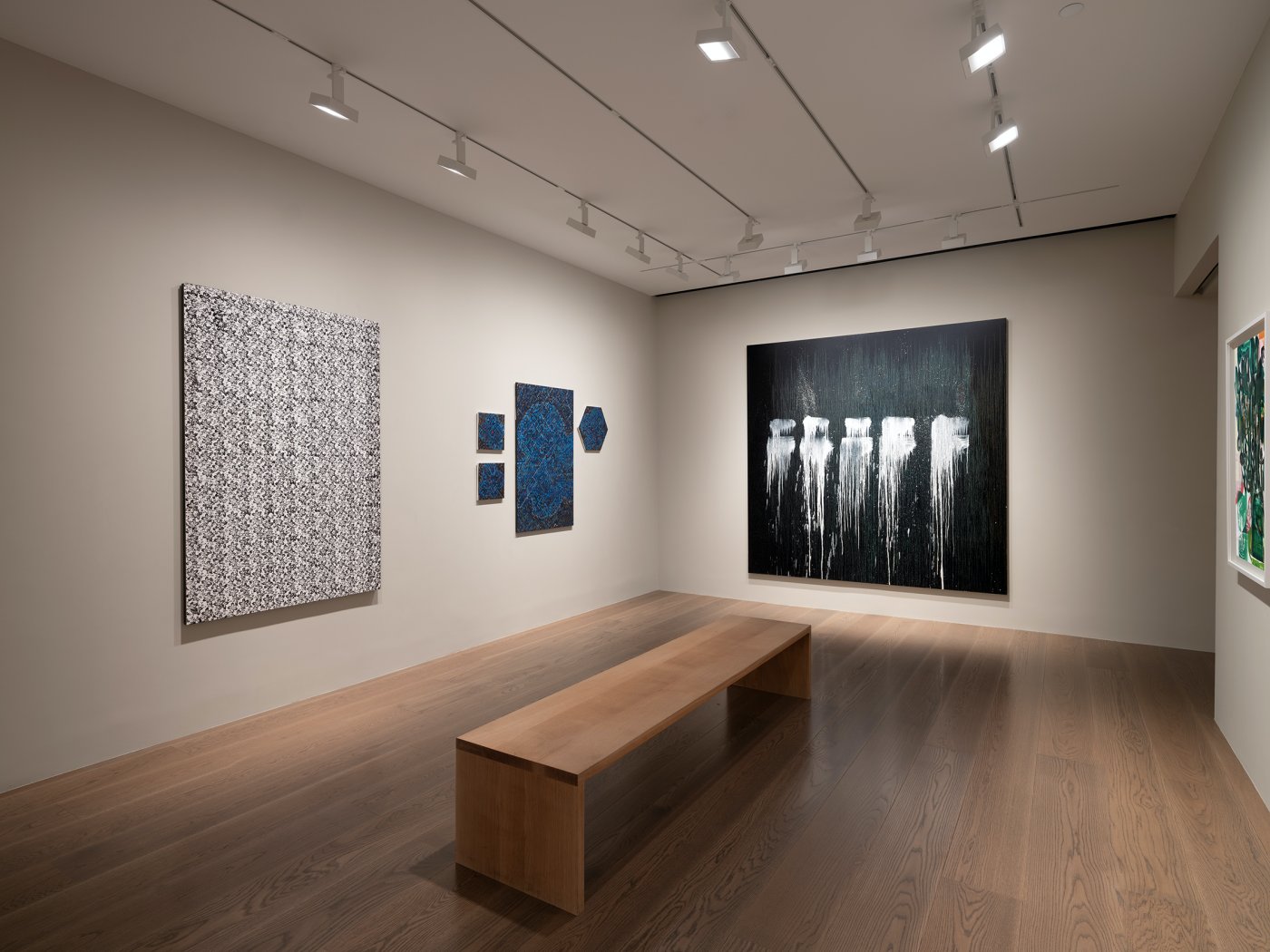 In the expansive practices of these artists, allusions to flora and growth are transformed into motifs of understated complexity and unexpected radicality. For Alex Katz, images of flowers were key in his struggle to define his figurative style in the 1950s and ‘60s. A highlight of the exhibition, Azalea on Lilac (2020) is a significant work among Katz’s recent oeuvre of flora, which includes his monumental paintings of water lilies inspired by Claude Monet and exhibited in 2019 at Musée de l’Orangerie, Paris. Here, Katz presents an intimate view of brightly colored azaleas against a monochrome lilac ground, suggesting a vast space like that of a receding sky.

The selection of nine oil paintings by Jonas Wood belongs to a formally experimental group of works initially referred to as the “New Plants.” Influenced by the sculptures of Alexander Calder, while also evoking the works of Henri Matisse and David Smith, these paintings’ bold color blocks and flat pictorial space result in a striking array of imagined perennials. Exhibited alongside these oils will be three paintings on paper by Amy Sillman. Deliberate and precise, Sillman’s gestural works occupy a realm between figuration and abstraction, landscape and portrait. Sillman has written, “I love a description I once heard of the act of painting as walking in a thick fog near a cliff.” Created between 2018 and 2020, the works on view encompass painted, silkscreened, and drawn elements, which form vibrant, energetic, and lush representational fields.

In the monumental canvas, 12 Hawks at 3 O’Clock (circa 1962), Joan Mitchell conveys a landscape illuminated by the warmth of the afternoon sun. Mitchell began the present work after leaving New York in 1959 for Paris, where she settled in a studio at 10 rue Frémicourt. The painting’s nuanced shades of jade, azure, and scarlet reflect the growing influence of the French modernists such as Vincent van Gogh, whose art Mitchell deeply admired. Once stating, “I could certainly never mirror nature. I would more like to paint what it leaves with me,” Mitchell represents in 12 Hawks at 3 O’Clock a feeling of stillness, a moment fixed in time. First exhibited in Paris in May 1962, the work was acquired by the artist Sam Francis, with whom Mitchell shared a friendship and a brief affair, remaining in his collection until his passing in 1994.

Eternal Seasons: Part II will also include canvases by the Hong Kong-based artist Michael Lau, created on the occasion of the exhibition. A pioneering designer of collectible toys and urban vinyl, Lau’s floral still lifes, both executed in 2020, are imbued with the artist’s sense of geometry and scale, fusing bold color with text and the aesthetics of street art.