Galleria Continua presents a solo show by Etel Adnan in its exhibition spaces. A poetess, novelist, essayist and visual artist, Adnan is one of the most influential and complete figures in the world of contemporary culture. 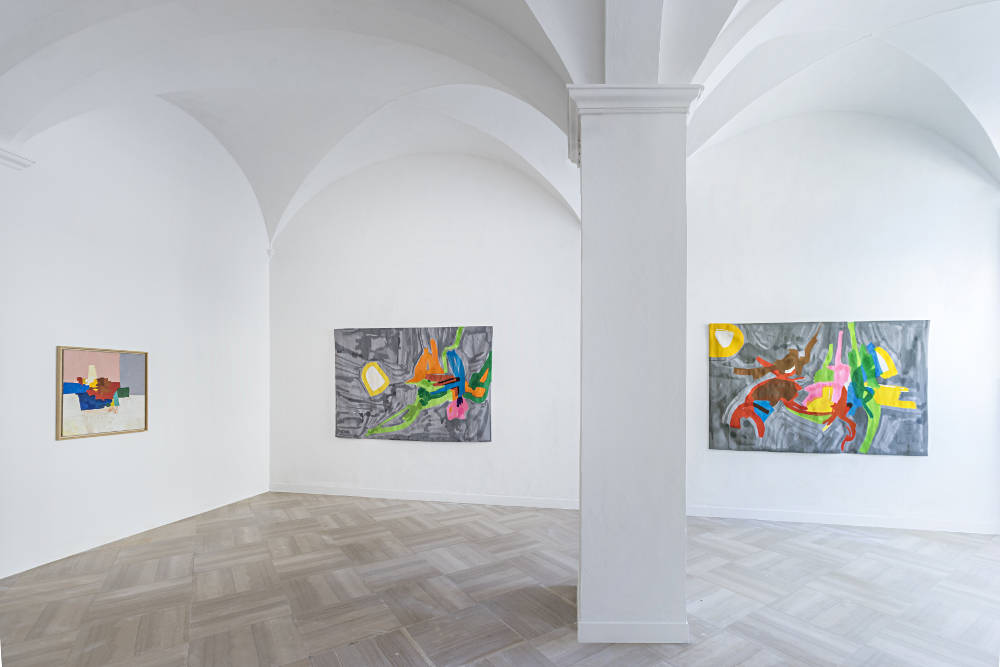 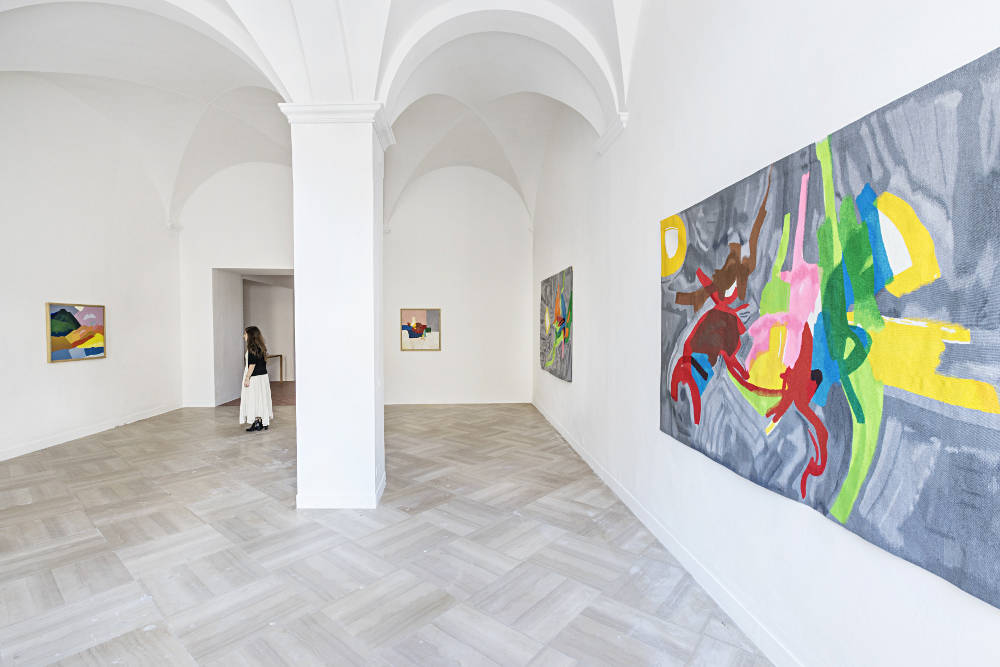 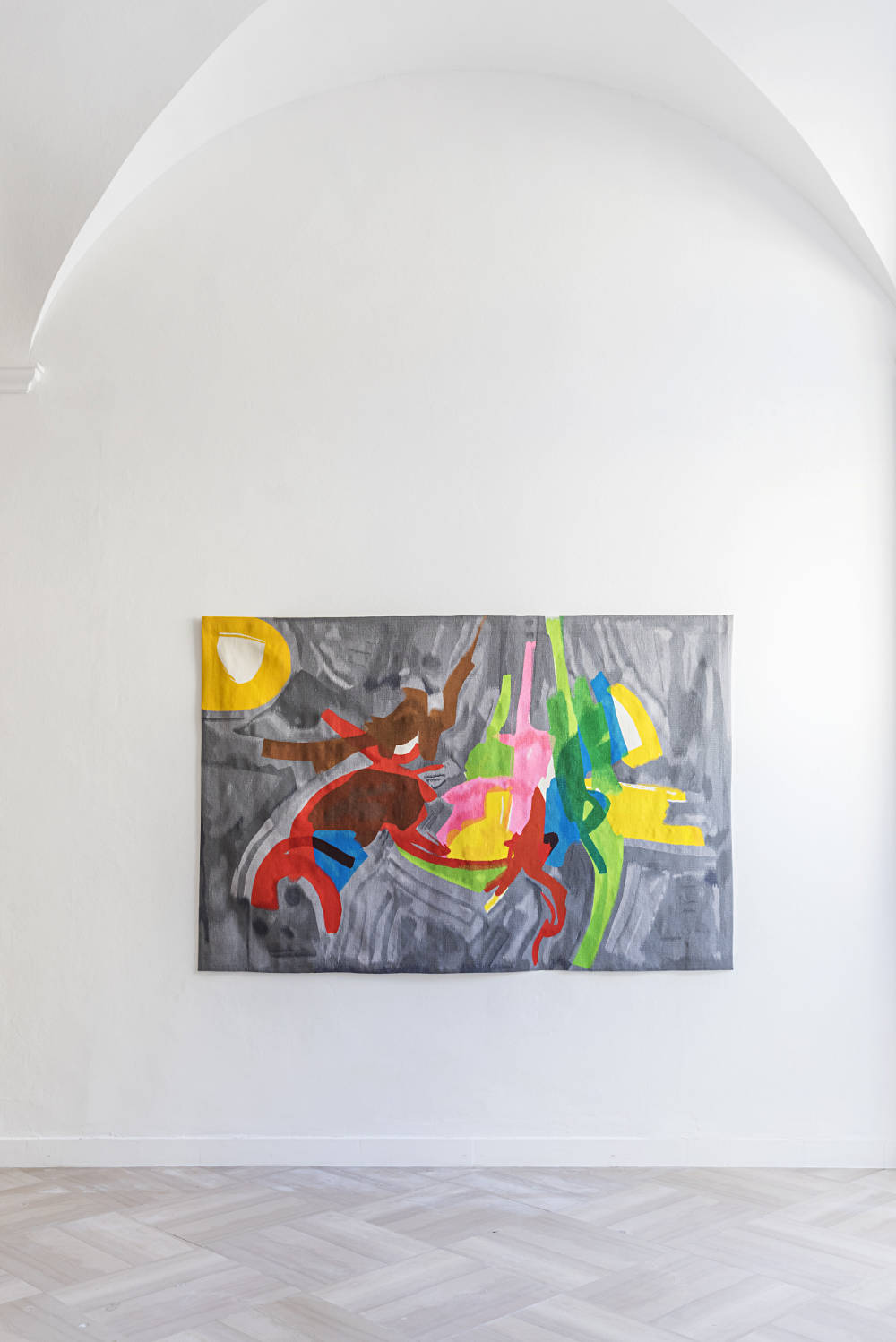 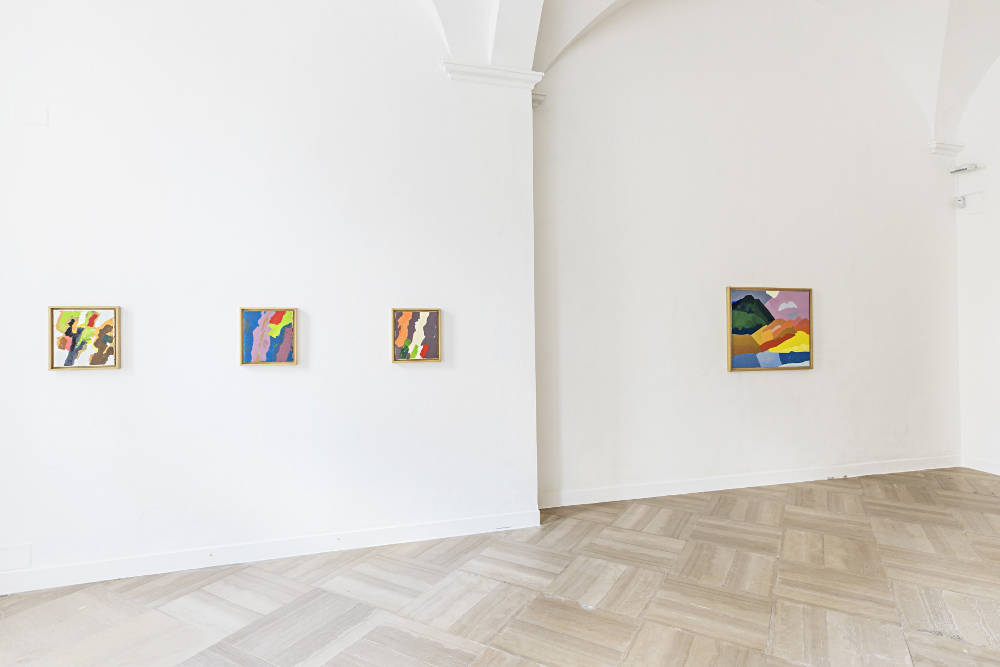 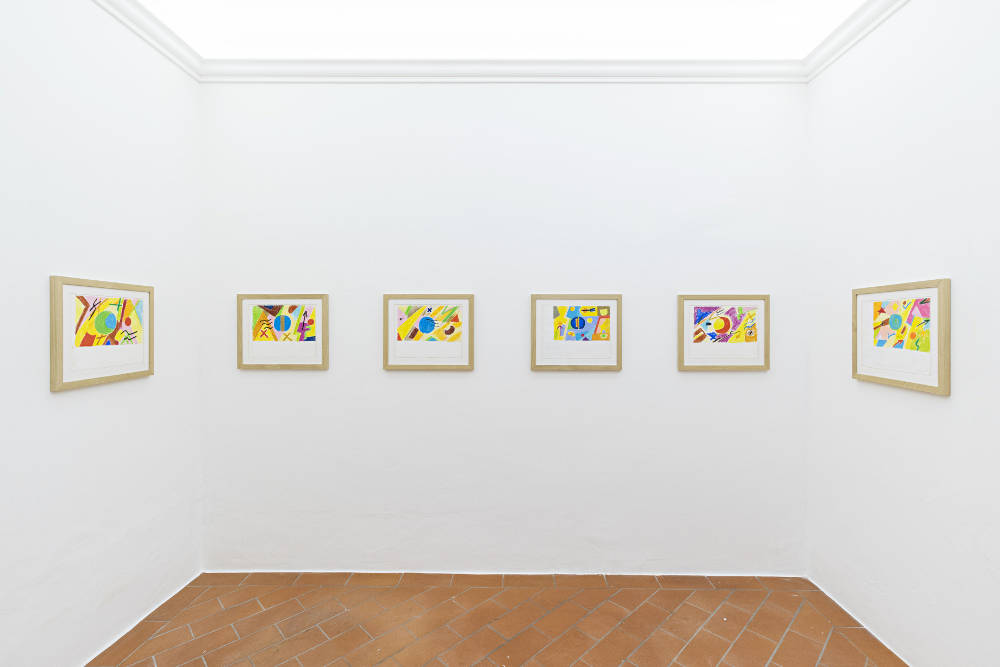 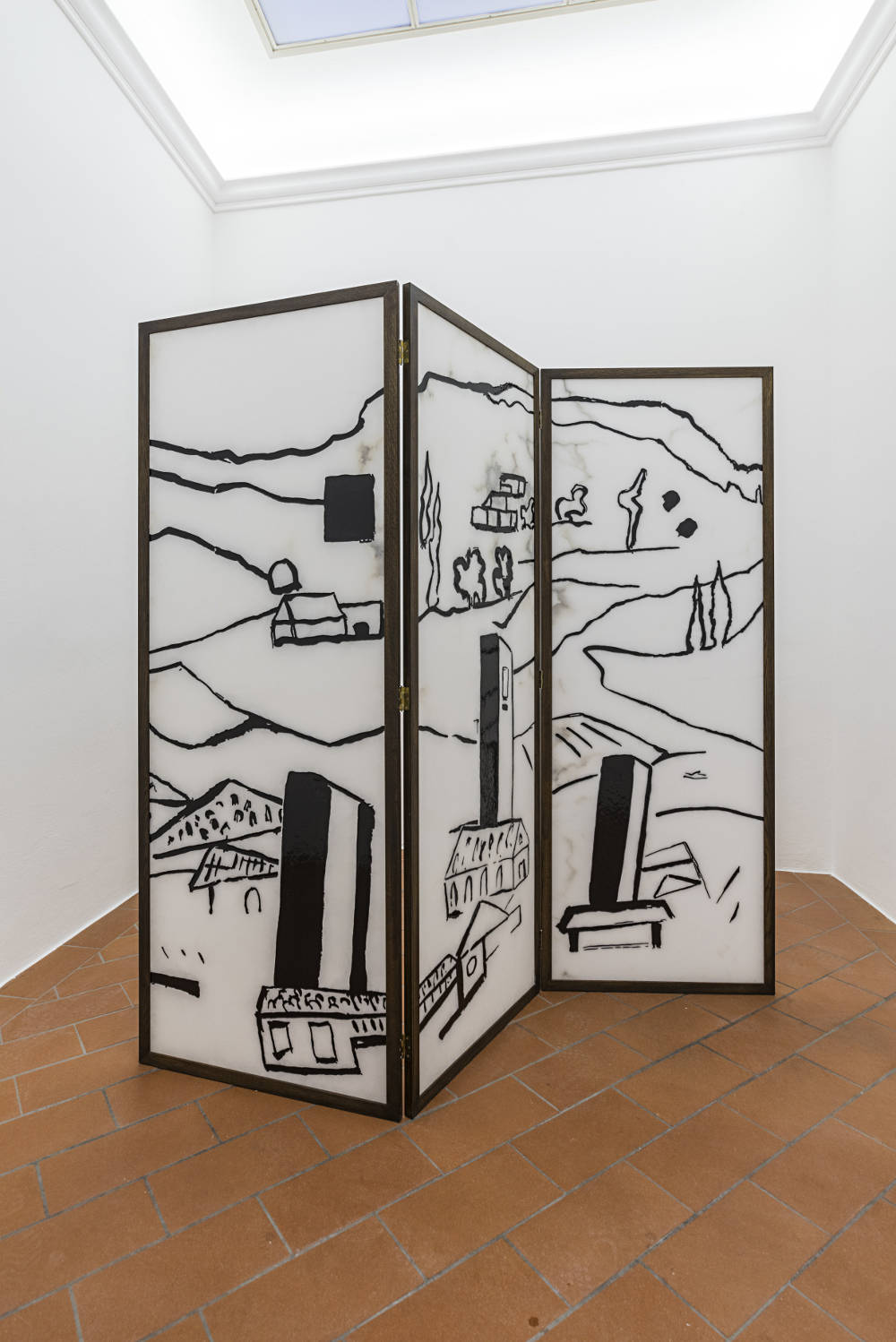 Born in Beirut in 1925 to a Muslim Syrian father and Christian Greek mother, Adnan has always embodied multiple perspectives. She is regarded as one of the most important representatives of the “Arab diaspora” and as a pioneer of female emancipation. She developed her interest in the visual arts during the years of the war of Algerian independence, when writing in French held political implications which the artist, out of solidarity with the rebels, refused to entertain. At the end of the 1950s she moved to San Francisco, taught philosophy at the Dominican College of San Rafael and began to paint.

Adnan’s exhibition project at San Gimignano offers a synthesis of her pathway as an artist, from the early beginnings through to the present day, and highlights her sculpture, a medium the artist has begun to engage with in recent years.

With a deep love for nature and its primeval symbiosis with human existence, Adnan’s landscapes have no human figures. Seeking to represent just the physical beauty of the planet and her intense bond of love with it, the artist’s paintings are crafted from clear-cut, decisive strokes. The colours do not blend into each other and seem always to have been there. Adnan likens her small-format paintings to poems: “Poems are small and compact. And my paintings on canvas are exactly the same thing. (…) Basically they are visual poems.” The exhibition features a series of small- format oil paintings on canvas, produced between 1968 and 2017.

For Etel Adnan tapestries are a life experience, weaving together cultures and languages: “I began to consider tapestries during my first year living in California. I felt I was missing something, and realized that in the Middle East, where I grew up, even less well-off people had rugs in their homes. So my feet felt the absence; (…) I began to design rugs. But rugs for walls.” During the 60s two events marked a turning point for Adnan in learning the art of tapestry weaving: attending a course on new forms of weaving run by Ida Grae, and her meeting with the Cairo architect Ramses Wissa and his wife Sophie Gorgi. For them, weaving should be a means of expression in the service of the creative forces of children. Artists create their motifs spontaneously thread by thread. A kind of rhythmic impulse emerges, the movement of which precedes any attempt at expression. Images are therefore initially reducible to patterns, sometimes stripped bare to the point of abstraction. Adnan uses specific drawings to create her textile works, without ever transposing the existing pictures into tapestry. This is also true of the two wool tapestries presented at San Gimignano – Lumière Blanche and Déjeuner au soleil, both produced 2016 – made by hand in collaboration with the Atelier Pinton in Aubusson. As in the paintings, the colours in these tapestries are vivid, extending singly over broad areas. But unlike the paintings, each band of colour is shot through with a series of other shades, giving the wool a special vibrancy.

In 1964 the artist discovered Japanese leporellos, booklets consisting of a single strip of paper folded in an accordion- pleat style; she began painting them, combining watercolour drawings with writing and poetry. She later dropped the latter, leaving the landscape as the sole subject of the work. One of the leporellos Adnan realized in 2013 on the occasion of her first solo show at Galleria Continua gave rise to a group of works entitled San Gimignano, alabaster screens on which there are a succession of views of the Tuscan landscape. For the first time the narrative rhythm of the leporello takes on three-dimensionality, engaging with the space. The alabaster faithfully renders the sense of lightness and transparency inherent to paper.

“The images are not still. They are moving things. They arrive, disappear, approach, back off, they are no longer even visual elements. Ultimately they are pure sensations. They are like something that calls to you through fog or a cloud”, the artist observed in an interview. And the light, colourful lines of some felt-tip drawings that Adnan produced about twenty years ago on polystyrene packaging likewise seem to appear from a cloud. Continually attracted by materials, and by the peculiarities and qualities each one possesses, Adnan is now tackling the quintessential sculptural material: marble. The intimate and playful dimension of a small abstract landscape drawn on polystyrene finds new space and a new consistency.

Etel Adnan was born in Beirut (Lebanon) in 1925. Educated at a Catholic convent run by French nuns in Beirut, in 1950 she went to Paris to study philosophy at the Sorbonne. Five years later she moved to the United States and pursued postgraduate studies at UC Berkeley and Harvard. Between 1958 and 1972 she taught philosophy at the Dominican College of San Rafael in California. After returning to Lebanon in 1972, she worked as literary editor for the Beirut daily newspaper, L’Orient-Le Jour. In 1976 she left Lebanon. Today she divides her time between Paris and Sausalito, California. In the twenty years following the publication of her first volume of poetry, Moonshots, Adnan published books in English and French, wrote texts for two documentaries by Jocelyn Saab on the civil war in Lebanon (broadcast on television in France, in various other European nations and in Japan), and two theatre works, Comme un arbre de Noël (about the Gulf War) and L’actrice. She made a lm about Calamity Jane together with Delphine Seyring, and a musical piece with her Love Poems. A number of Adnan’s poems have been set to music, for example by Gavin Bryars (“Adnan Songbook”) and by Zad Moultaka (“Nepsis”). Other works, also available in Italian translation, include Journey to Mount Tamalpais, In the Heart of the Heart of Another Country, a brief but intense biography, “Growing up to be a Woman Writer in Lebanon”, The Arab Apocalypse and her celebrated novel Sitt Marie Rose. Set in the civil war in Lebanon, the book deals in dramatic terms with the issue of religious and political fundamentalism, and the role of women in Lebanese society. It won the France- Pays Arabes Award in 1977, and has been translated into over ten languages, becoming a classic work of war literature.

Works by Etel Adnan are in private collections and museums around the world, including, to name just a few, the Royal Jordanian Museum in Amman, the Tunis Modern Art Museum, Tunis, the Sursock Museum in Beirut, the Institut du Monde Arabe in Paris, the British Museum in London, the World Bank Collection and the National Museum for Women in the Arts in Washington D.C. In 2010 the artist contributed to Memory Marathon at the Serpentine Gallery in London, and in 2012 she showed at dOCUMENTA (13) in Kassel. In 2014 her works were exhibited at the Whitney Biennial (New York), and in the same year the Mathaf (Doha) mounted a retrospective of her work curated by Hans Ulrich Obrist. In 2016 she had a major solo exhibition at the Serpentine Sackler Gallery (London).