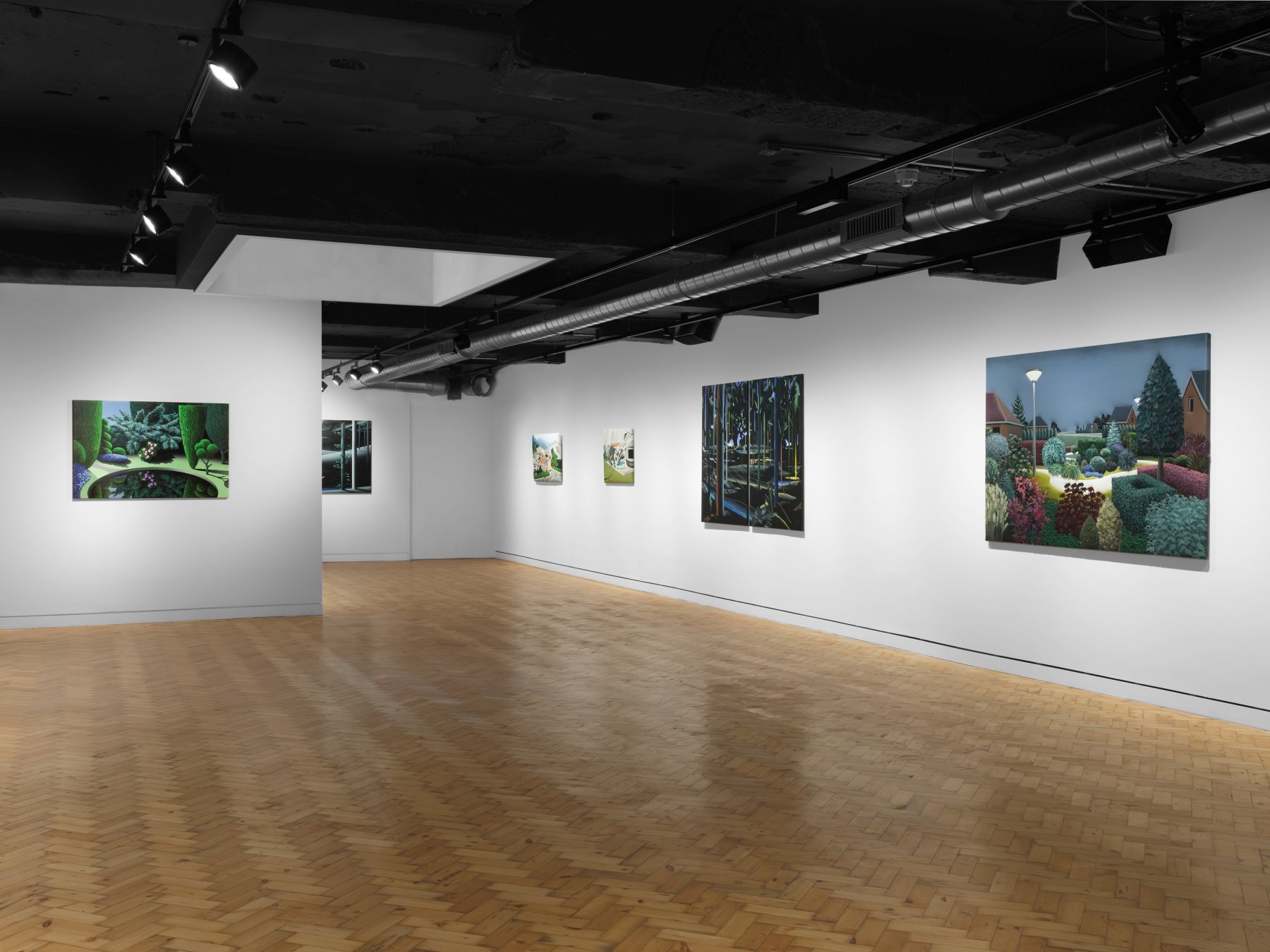 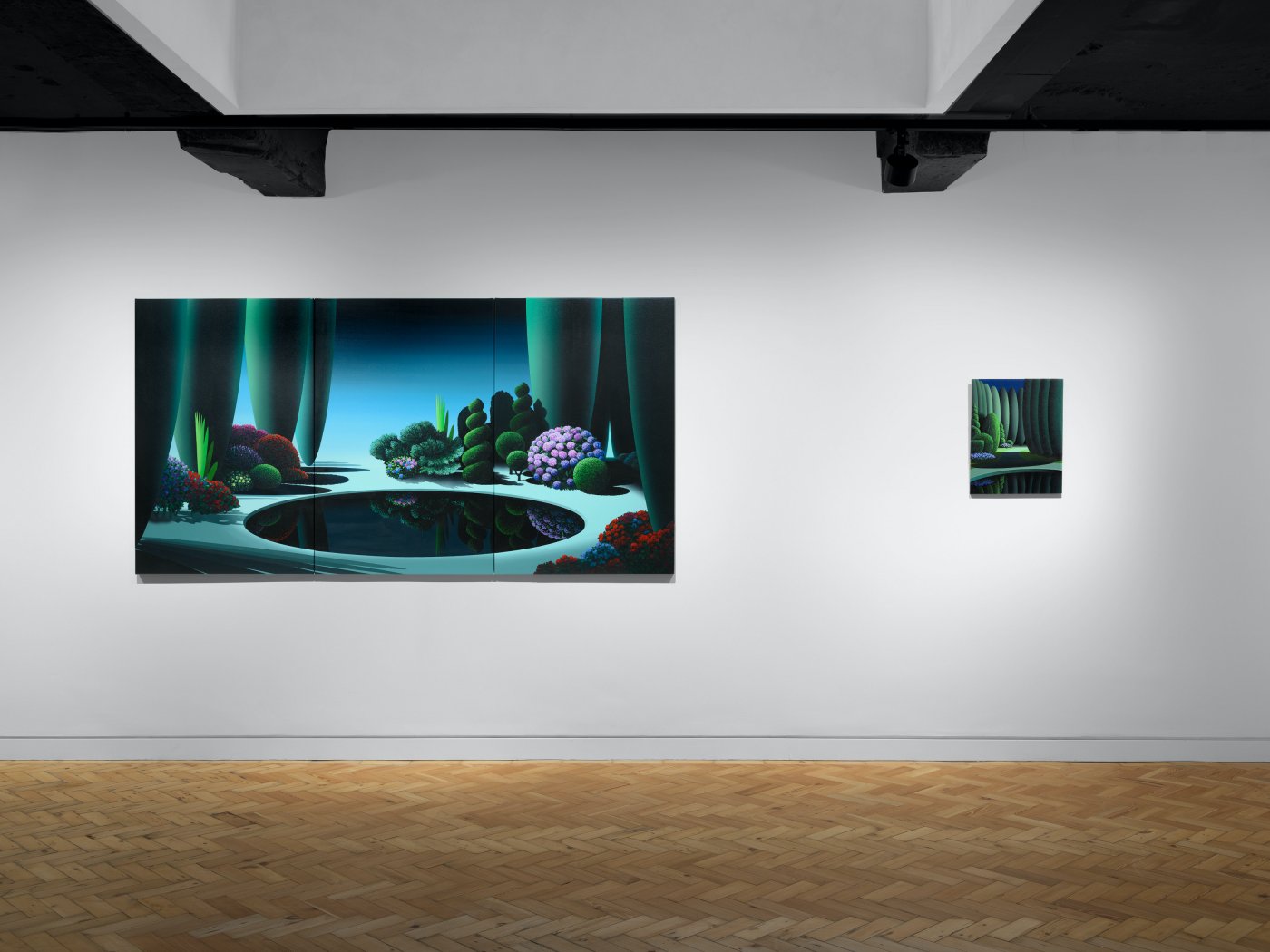 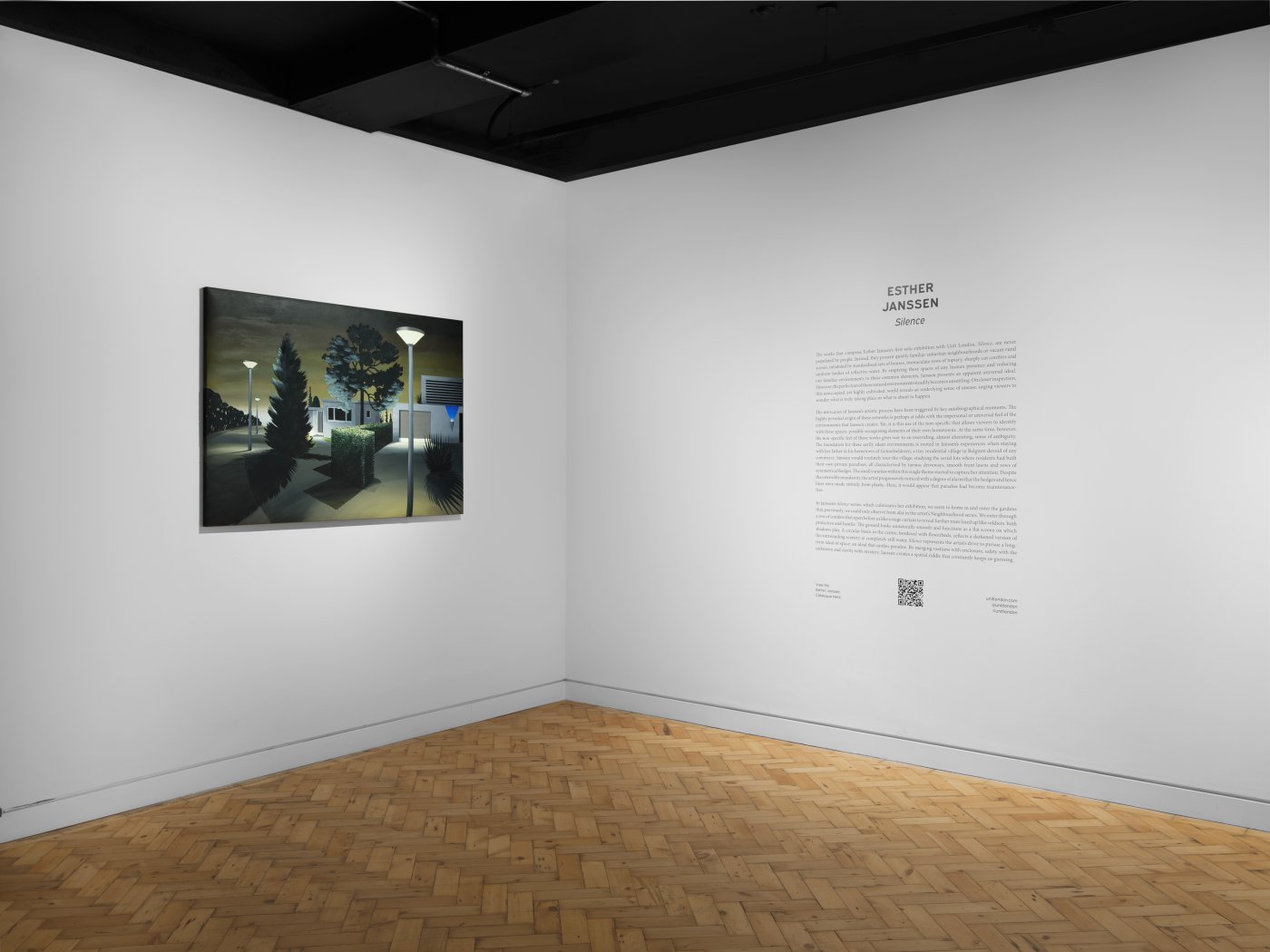 By emptying these spaces of any human presence and reducing our familiar environments to these common elements, Janssen presents an apparent universal ideal. However, the perfection of these natural environments steadily becomes unsettling. On closer inspection, this unoccupied, yet highly cultivated, world reveals an underlying sense of unease, urging viewers to wonder what is truly taking place or what is about to happen. The intricacies of Janssen’s artistic process have been triggered by key autobiographical moments. The highly personal origin of these artworks is perhaps at odds with the impersonal or universal feel of the environments that Janssen creates. Yet, it is this use of the non-specific that allows viewers to identify with these spaces, possibly recognising elements of their own hometowns. At the same time, however, the non-specific feel of these works gives way to an overriding, almost alienating, sense of ambiguity. The foundation for these eerily silent environments is rooted in Janssen’s experiences when staying with her father in his hometown of Genoelselderen, a tiny residential village in Belgium devoid of any commerce. Janssen would routinely tour the village, studying the serial lots where residents had built their own private paradises, all characterised by tarmac driveways, smooth front lawns and rows of symmetrical hedges. The small varieties within this single theme started to capture her attention. Despite the ostensible mundanity, the artist progressively noticed with a degree of alarm that the hedges and fence lines were made entirely from plastic. Here, it would appear that paradise had become maintenance-free.

Janssen’s works can perhaps be defined by the presence of paradox.
For the artist, paradox lies at the heart of all things and her works reflect this notion, presenting opposing ideas and frequently toeing the line where counterparts meet. Instead of portraying these oppositions as separate and distinct sites, Janssen seeks to merge them, showing them as part of the same inextricable spectrum. In particular, the oscillation between ideal, reality and appearance permeates Janssen’s oeuvre; things are never quite as they seem or as we dreamed and desired them to be.

On a technical level, Janssen’s artistic process emulates notions of paradox, playing with these ideas of appearance and reality, digitalisation and craft. The artist always begins with an elaborate digital sketch before cutting out each of the image layers in artificial leather, the dominant material throughout her oeuvre. The use of artificial leather itself is significant. As a material, it has become removed from its natural breathable origin, embodying and making tangible this sense of alienation and suffocation that pervades Janssen’s works. The cut edges of the artificial leather are just as clean as a digital rendering, resulting in precisely defined shapes. Janssen then paints in acrylic directly onto the material before stitching each element together by hand in a laborious, yet meditative process. From a distance, her works appear digitised. Only up close, do the layers of paint, artificial leather and thread begin to reveal themselves. In some cases, the materials protrude from the seemingly flat canvases, giving these works a sense of three-dimensional form that almost urges viewers to reach out and touch. In this sense, the very materiality of Janssen’s works opposes their content, giving way to a softer, comforting and more timeless world.

In Janssen’s Silence series, which culminates her exhibition, we seem to home in and enter the gardens that, previously, we could only observe from afar in the artist’s Neighbourhood series.

We enter through a row of conifers that open before us like a stage curtain to reveal further trees lined up like soldiers, both protective and hostile. The ground looks unnaturally smooth and functions as a flat screen on which shadows play. A circular basin in the centre, bordered with flowerbeds, reflects a darkened version of the surrounding scenery in completely still water. Silence represents the artist’s drive to pursue a long-term ideal of space: an ideal that unifies paradox. By merging vastness with enclosure, safety with the unknown and clarity with mystery, Janssen creates a spatial riddle that constantly keeps us guessing.