Skarstedt is delighted to announce the inauguration of the new Paris gallery, renovated by Jacques Grange, at 2 Avenue Matignon with My Old Neighbourhood, the exhibition of recent paintings by Eric Fischl. 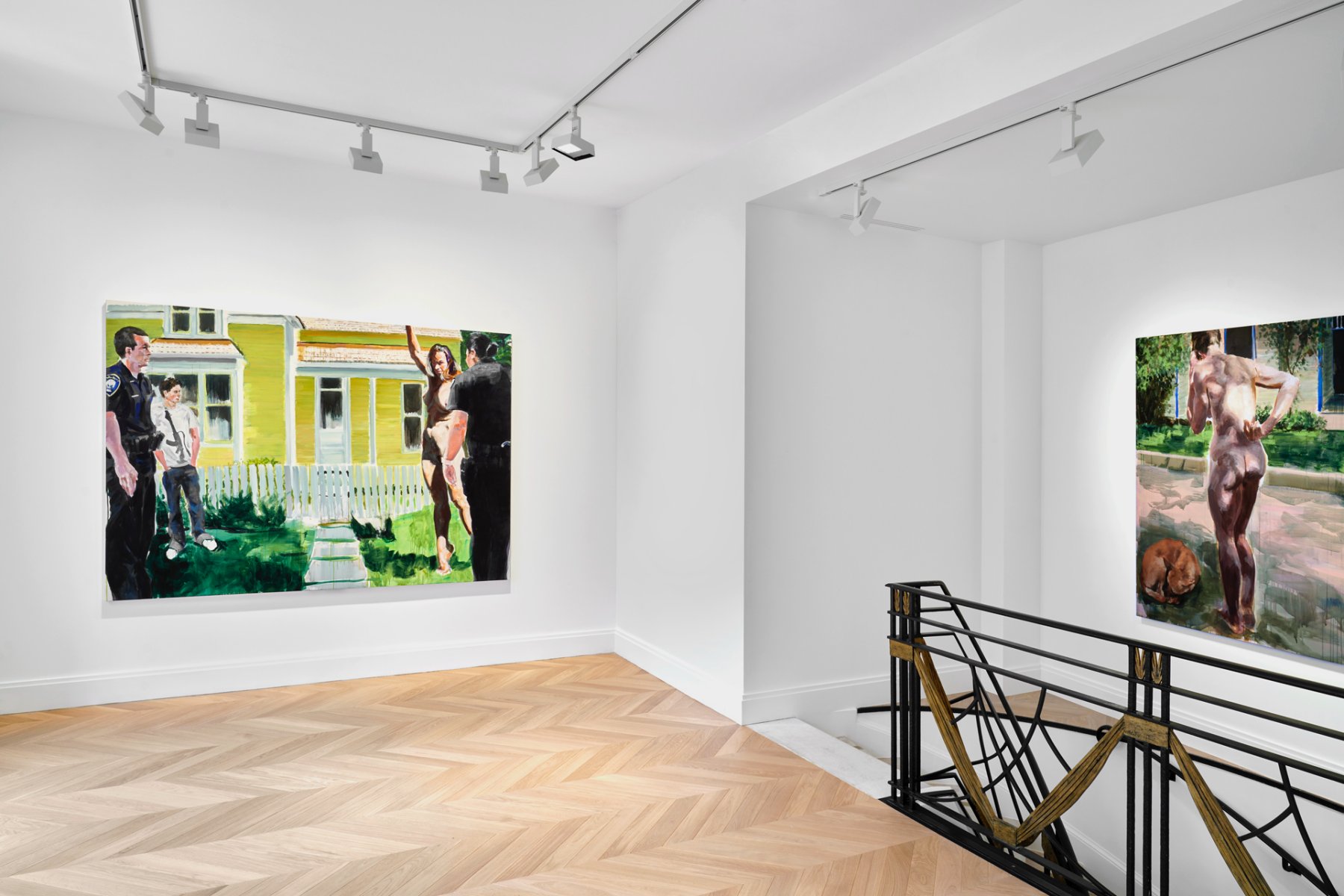 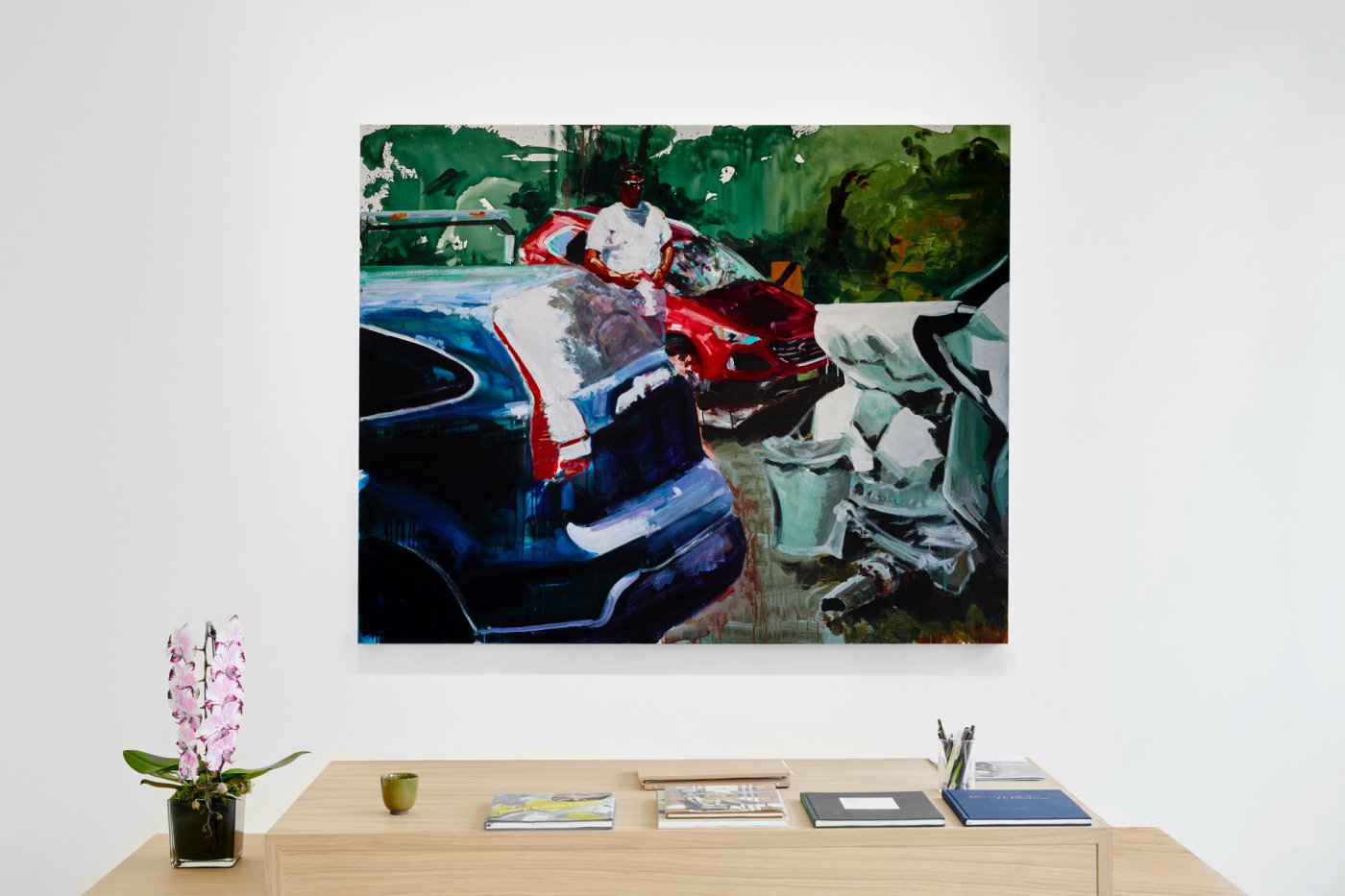 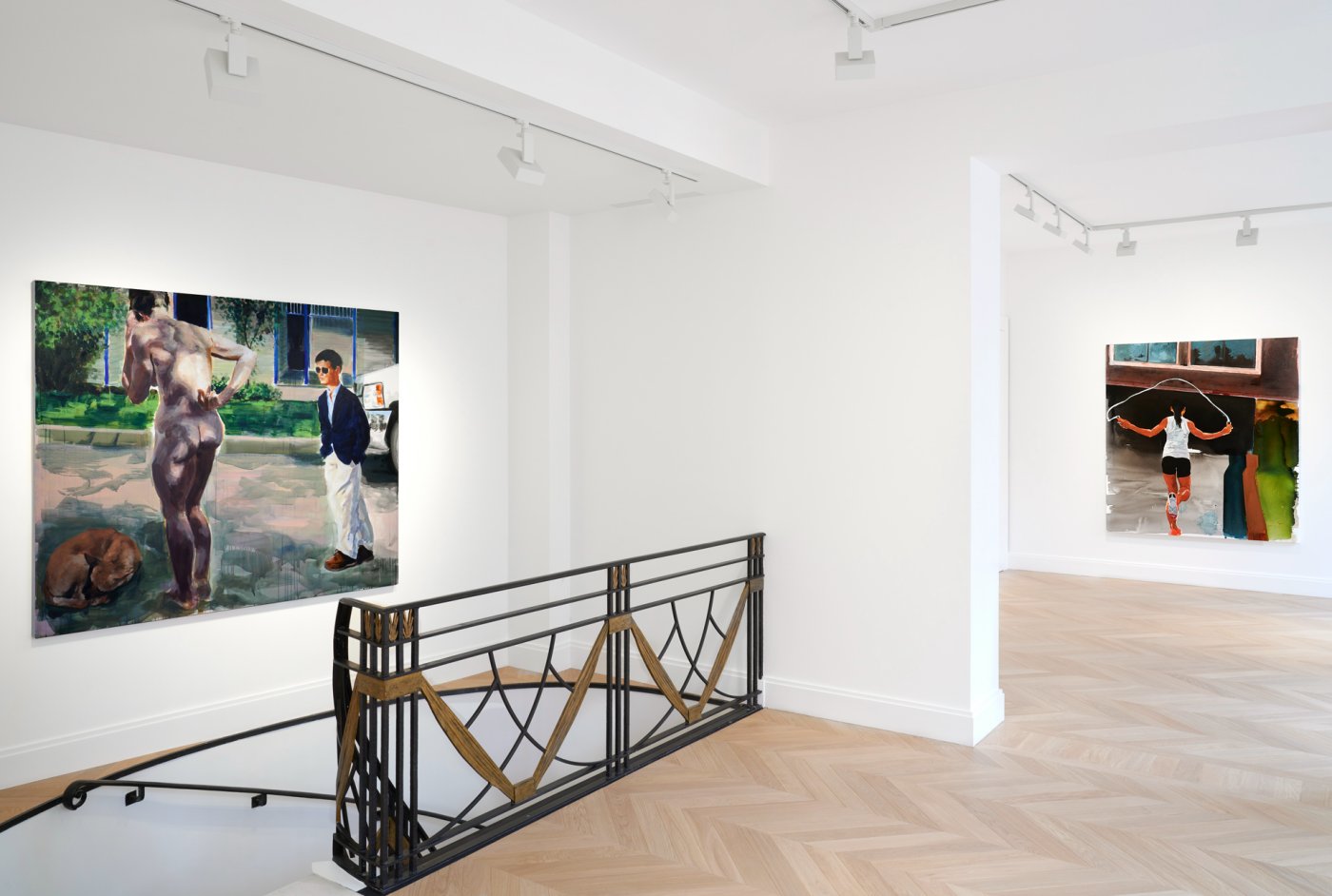 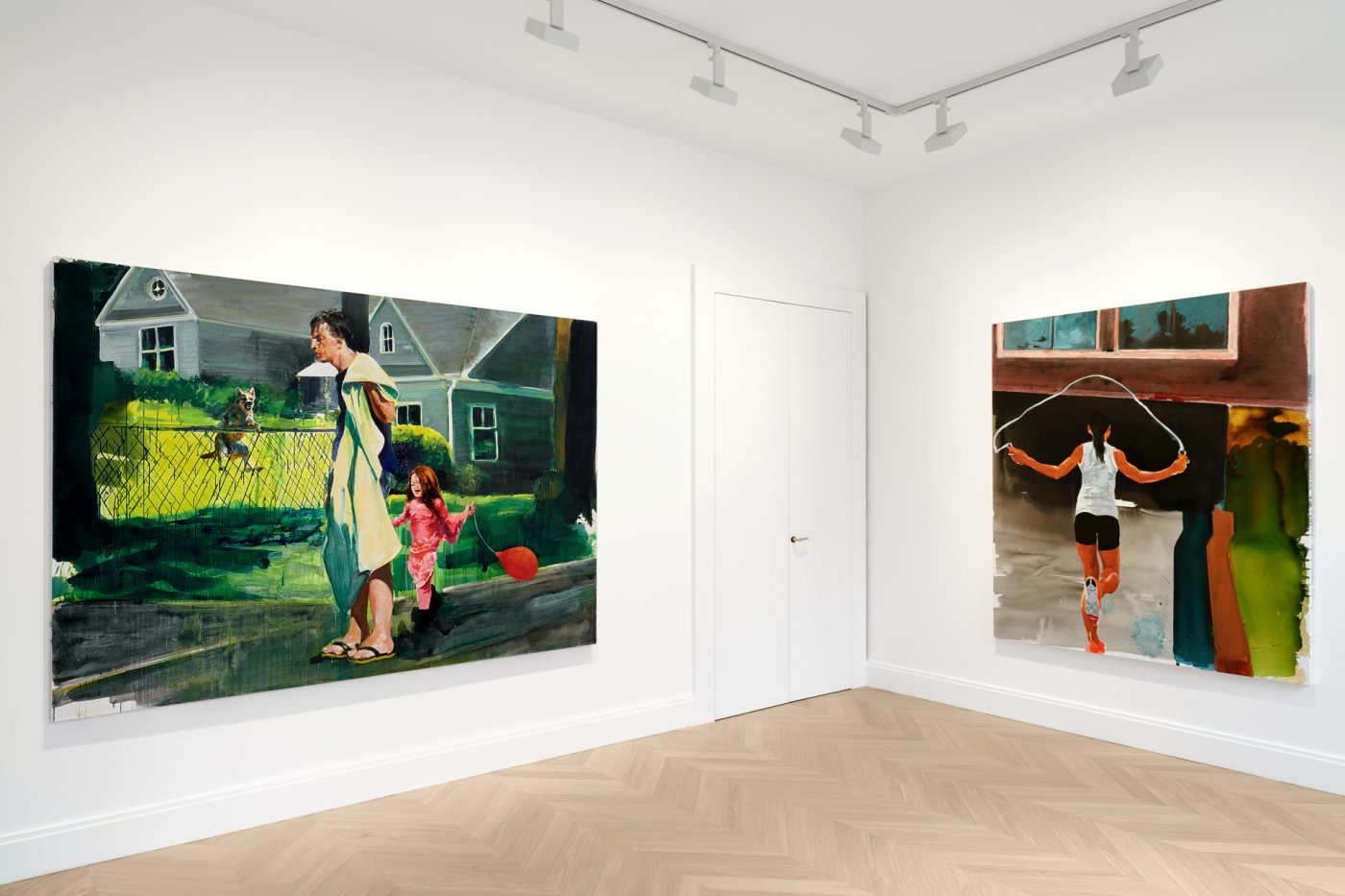 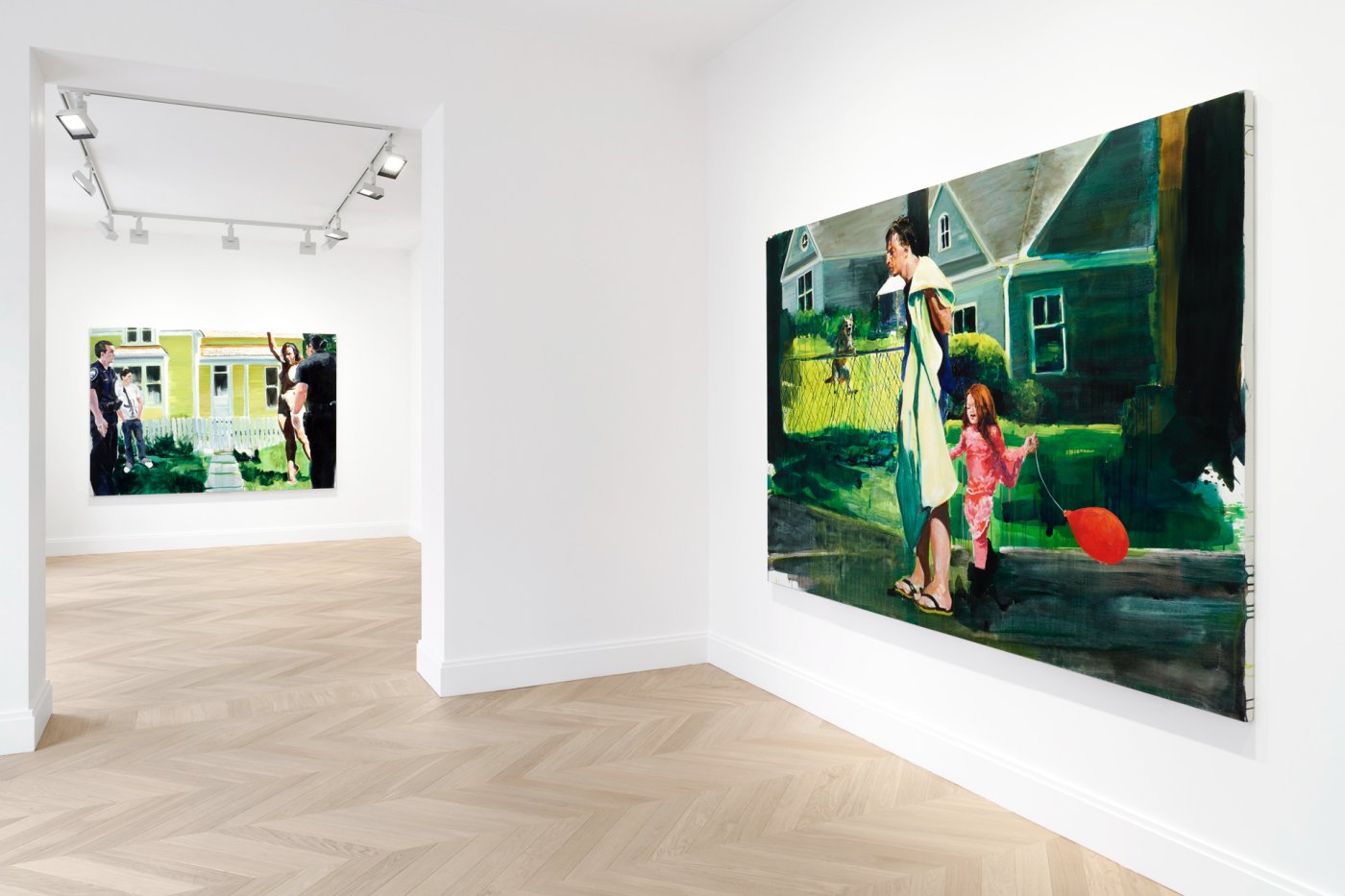 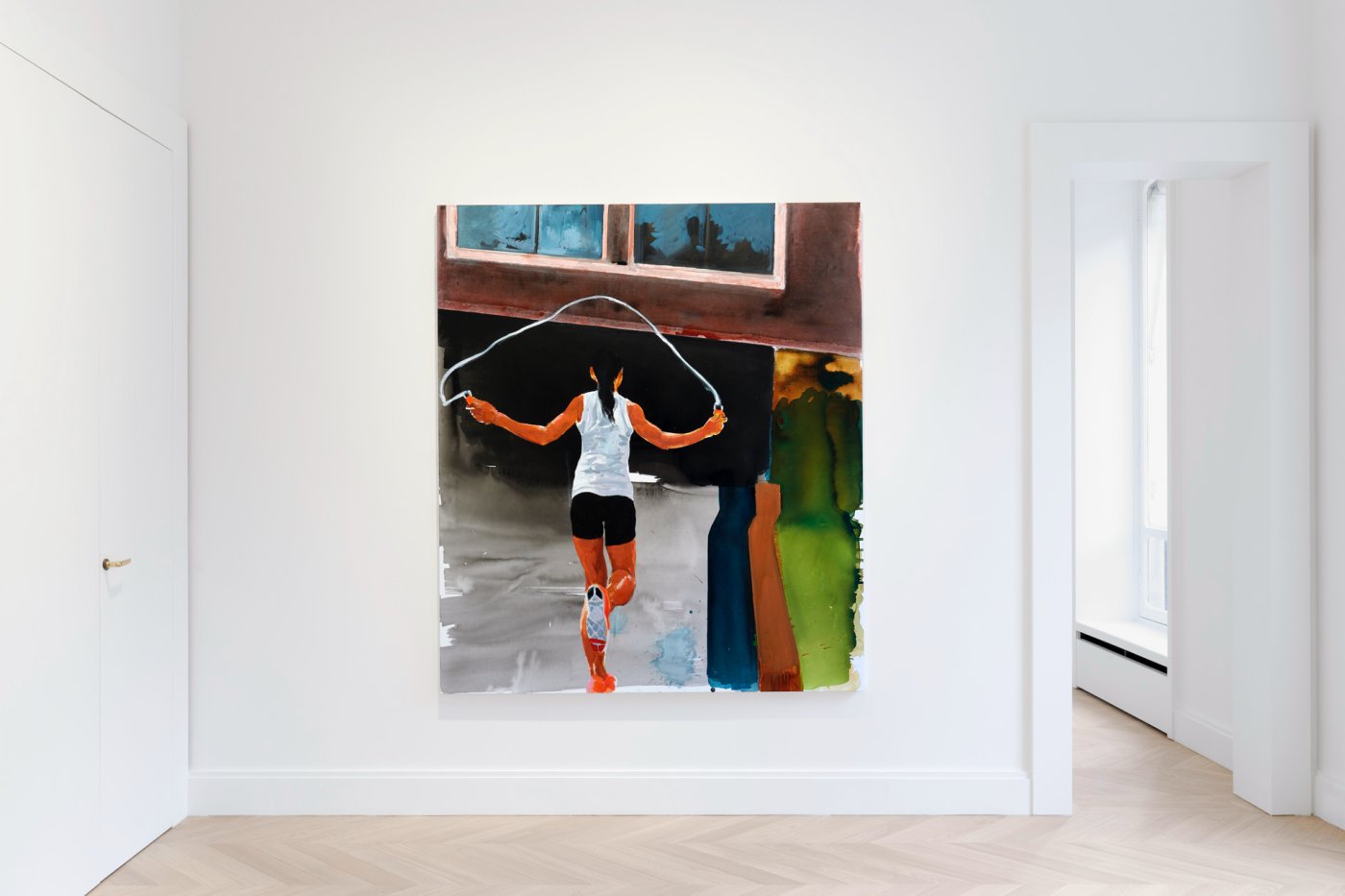 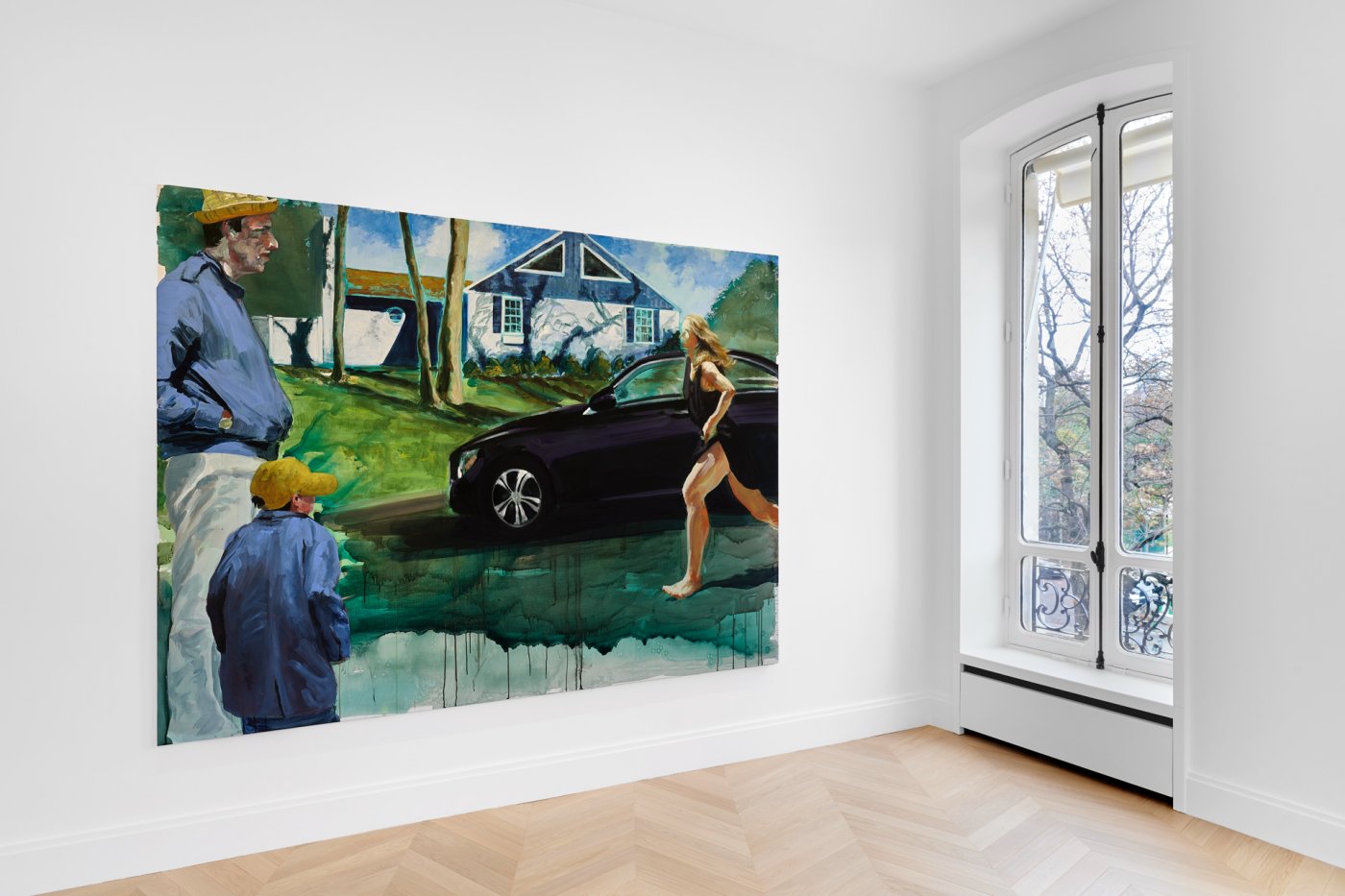 In My Old Neighborhood, Fischl stages moments of human interactions set outdoors, on daylit sidewalks and front yards of suburban streets. One of the central themes in the artist’s oeuvre, the vision of American suburban life has fuelled some of his most resonant and provocative works. Here, Fischl’s protagonists are sharing moments of improbable intimacy and proximity in the public space – the realm, distinct from the sense of privacy permeating the artist’s earlier explorations of the other side of the American Dream. Engaged in personal reflections, the characters appear exposed, as if driven to the street by an unknown force. Houses and cars form a grid-like backdrop of angular colour fields yet look unused and detached from the scenes unfolding in the foreground.

Citizens of suburban dystopias, Fischl’s characters rarely make eye contact, struggling to connect with each other. Often shown naked amid clothed street observers, the figures project a sense of fragility and unease. In Private Property, an unclothed woman is confronted by policemen, the bright sunlight shimmering on the skin to exacerbate her defencelessness and the strangeness of the scene. In The Old Man Stays Behind, three masked individuals attend to the naked protagonist suggesting a promise of human connection, yet emphasising one’s feeling of vulnerability among others, transformed and heightened by the events of the past eighteen months.

Using photographs and collage as starting point, Fischl constructs compositions which oscillate between collective dramas and individual renderings of human nature, pinpointing moments imbued with unresolved conflict and existential angst. Generating diverse narrative associations by juxtaposing various layers of signification, the works in My Old Neighborhood present affecting situations which retain a degree of uncertainty and evade direct social or political interpretation. As the artist explains: “I paint from a position of not knowing. I’m guided by association and intuition, and I am in search of an experience filled with meaning.” Capturing deeply personal reflections on American society today, the works are thus quasi-autobiographical, an aspect further highlighted by the title of the series.

Executed on large scale, the paintings envelop our visual field, triggering a visceral, almost bodily response which draws the viewer into the scene. In Cul de Sac, two figures turn towards the running woman from the extreme foreground of the composition, as if inviting us to enter the pictorial space and join them as characters of the script. Observing the woman as she runs to an apparent dead end, we feel involved but helpless, bewildered and acutely conscious of anxieties of the present moment. As Fischl observes, “What you see in My Old Neighborhood are a series of scenes in which something inexplicable or surprising or irrational is taking place. In most of the paintings the audience is triangulated with male observers who are confused witnesses to the event. The audience shares their confusion and the feeling of being frozen in place by what is going on. When something occurs outside of the expected or hoped for and the nature of it strips you of your armour, this is the definition of tragedy. Ambiguity is at those moments the only way to process understanding.”

For the first time in Europe and with the support of the Louvre, Skarstedt will also present Eric Fischl’s sculpture titled Tumbling Woman, in the context of FIAC Hors Les Murs at Tuileries Gardens. The new series of paintings and this emblematic sculpture embody Fischl’s mastery in the representation of the human form. FIAC Hors Les Murs opens to the public on Tuesday 19th October and Tumbling Woman will be on view from 8th October – 20th November 2021.