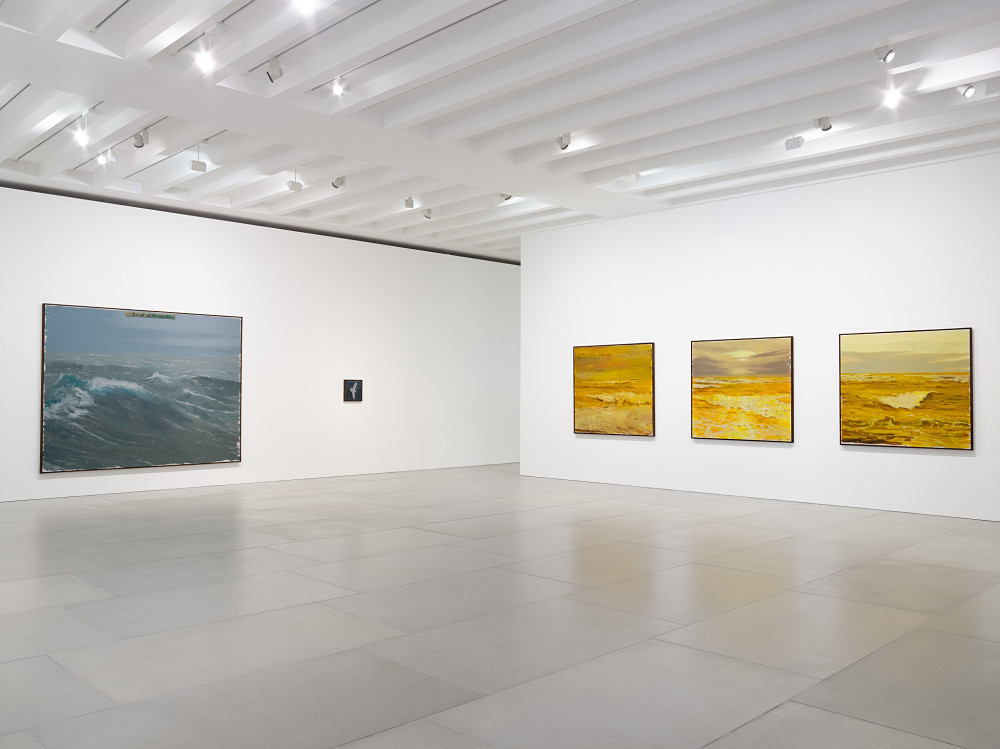 Here in sixteen new, previously unseen, paintings Martínez Celaya focusses on the sea, a recurring motif in his work, and its relation to the subconscious. Although the paintings betray Martínez Celaya’s island upbringing and his deep and lasting interest in literature, they elude any specific biographical or narrative interpretation.

Despite leaving the Caribbean in 1982, the sea has remained with Martínez Celaya as a ‘stowaway’. ‘The sea’, he writes, ‘was the end of all paths and the edge of all comings and goings, the reference point for conversations, and the all-absorbing witness of a history of colonialism and longing.’ In this new body of work, Martínez Celaya considers the sea as an accomplice and judge of expeditions. The artist personifies the sea in various modes; in the instance of The Mirror (never heard words like these) it is a passive, yet ever-watchful observer, reflecting the inherent loneliness of human experience, filled with wants and lacks. ‘For us, the bounding sea was sometimes a mirror and other times a window, and occasionally a letter, but it was never an eye looking back at us and offering the company we needed.’ On the other hand, the sea in The Returning Tale is an active participant that sentences every expedition to return to the same shores, much like the echoing, melancholic cries of the sea birds (in The White Birds).

Although often working in multiple mediums, including sculpture and the written word, central to Martínez Celaya’s artistic concern is the nature of painting and its capacity to create and sustain meaning. For him, painting is an inquiry that prompts him to often significantly rework a piece several times over the course of months or years. Here in The Prophet, for example, the artist worked through a variety of species of sea creatures and human figures before finalising the scene as a girl with one foot resting on a beached shark.

Whilst making an artwork, Martínez Celaya also lays out his thoughts in texts, providing a verbal connection to the works, yet freeing him from the urge to involve language directly in the process of making the picture. His paintings are poetic in the sense that their impact comes from the combined emotional resonance of the individual parts, yet, as critic Barry Schwabsky writes in the publication that accompanies this exhibition, ‘they are notably unliterary; they slip their meanings surreptitiously past the intellect’s border guards.’

The Mariner’s Meadow catalogue includes an essay by Barry Schwabsky, a conversation between Martínez Celaya and the writer and psychoanalyst Anouchka Grose, as well as the artist’s texts and his selection of poetry.

As part of the opening events at the gallery on Thursday, 23 May the artist will be in conversation with Sir Charles Saumarez Smith, art historian and Senior Director, Blain|Southern.

This exhibition follows solo projects of works addressing the land and sky in New York, Berlin and Stockholm, as well as the artist’s participation in the 13th Havana Biennial. In addition, The Huntington Library, Art Collections, and Botanical Gardens in San Marino, California recently announced a fellowship created for the artist. As a visual arts fellow, Martínez Celaya is working among The Huntington’s extensive history, literary, art, and botanical collections to produce new works and programmes.

Enrique Martínez Celaya is an artist, author, and former scientist whose work has been exhibited and collected by major institutions around the world. He is the author of books and papers in art, poetry, philosophy, and physics. Martínez Celaya works in a wide range of materials and media, creating works on paper, painting, sculpture and installation. His work touches on leitmotifs of youth, isolation, the vastness of nature, and the sublime. The scenes of Martínez Celaya’s work form metaphorical and psychological landscapes. Nature is littered with traces of human inhabitation; a secluded pathway cuts through a field overgrown with poppies; an empty house perched amidst fir trees emits smoke. Employing unfussy compositions and adopting archetypal images from nature such as a turbulent sea, a dense forest or a meadow of flowers, Martínez Celaya’s works stand apart from any specificities of time and place, rather, they reach towards something simultaneously humble and mythic.