Barakat Contemporary presents BIG MOUTH, a solo exhibition by British artist Emma Hart (b. 1974). This is the first solo exhibition in Korea by Hart, a winner of the Max Mara Art Prize for Women (2016). Working with ceramic sculpture, Emma Hart creates work of metaphoric expression implied in familiar objects, alluding to the systems which not only guide but also force upon us social norms. 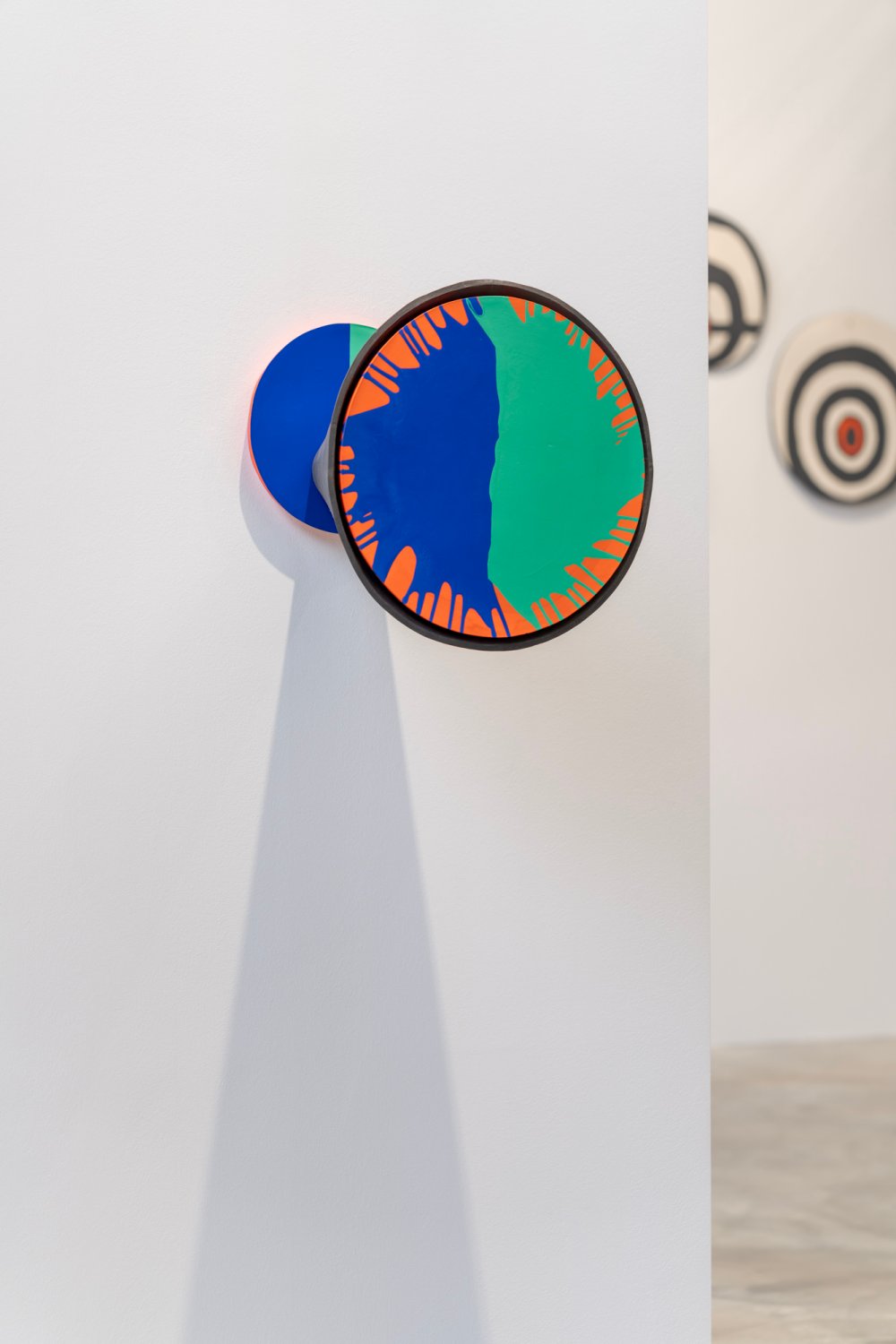 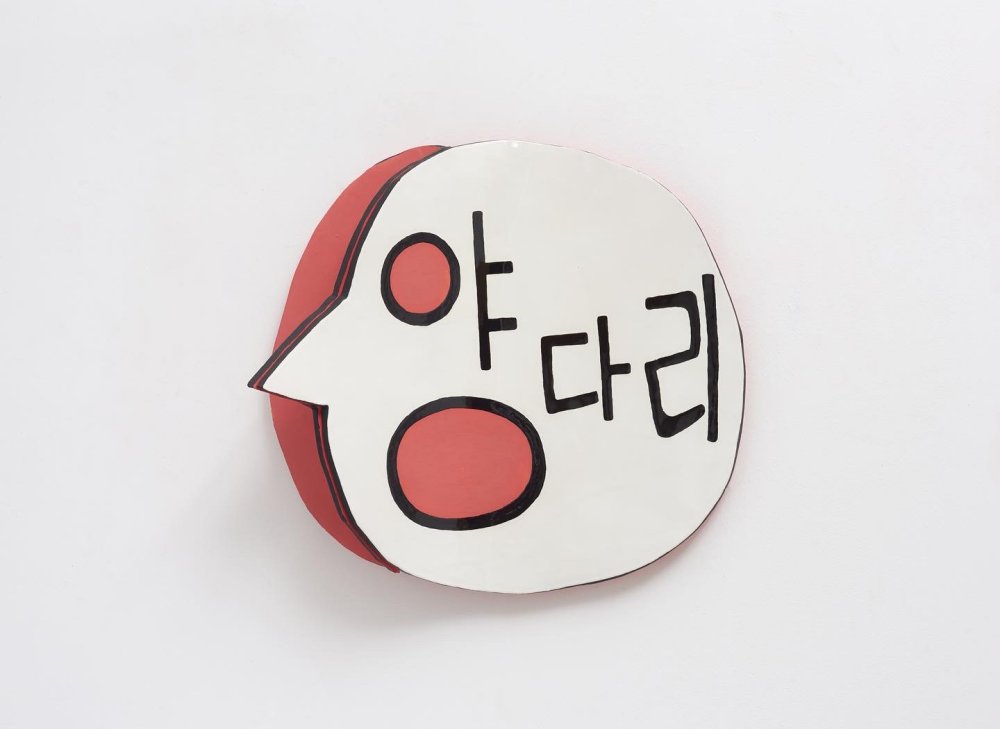 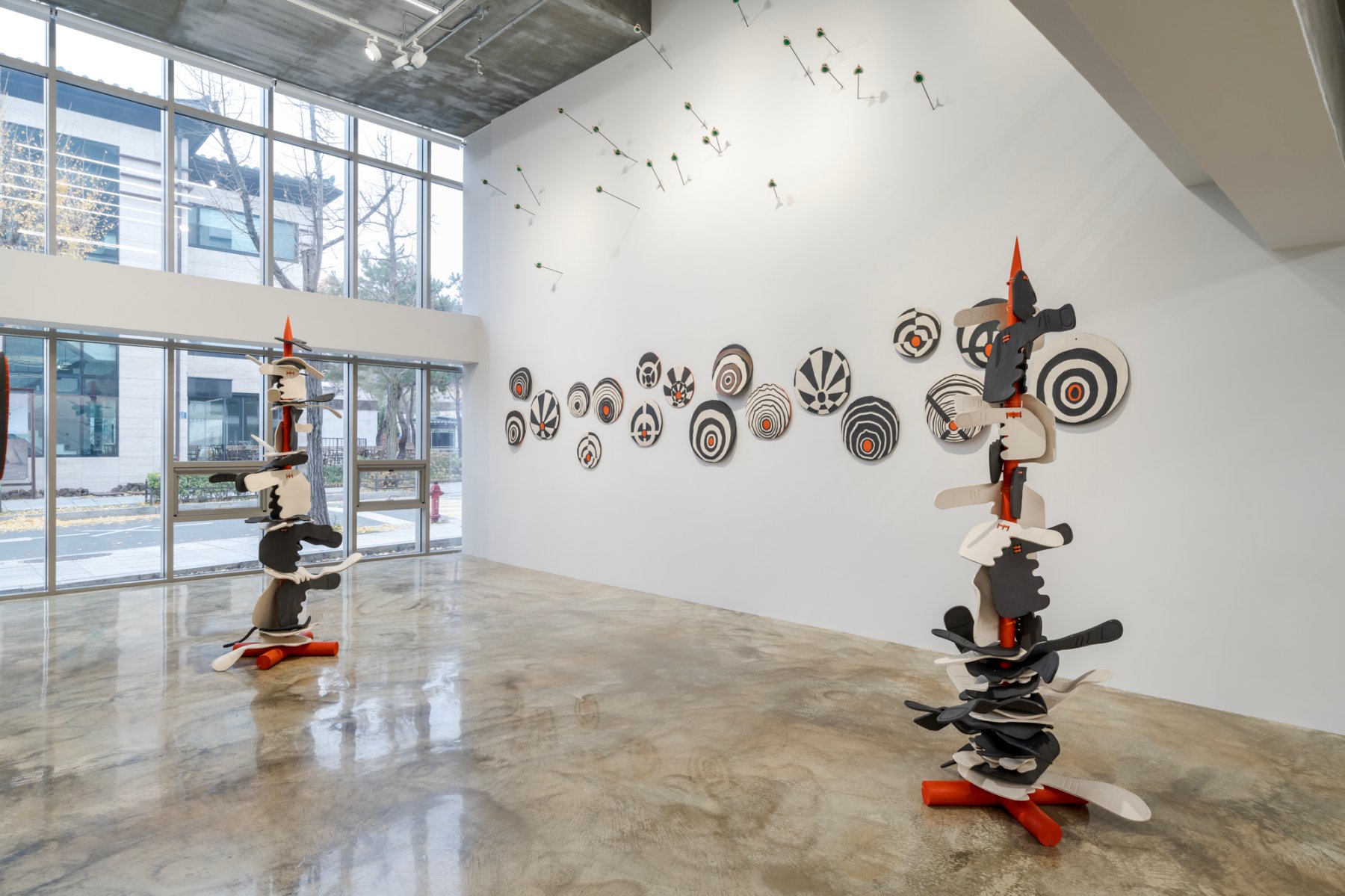 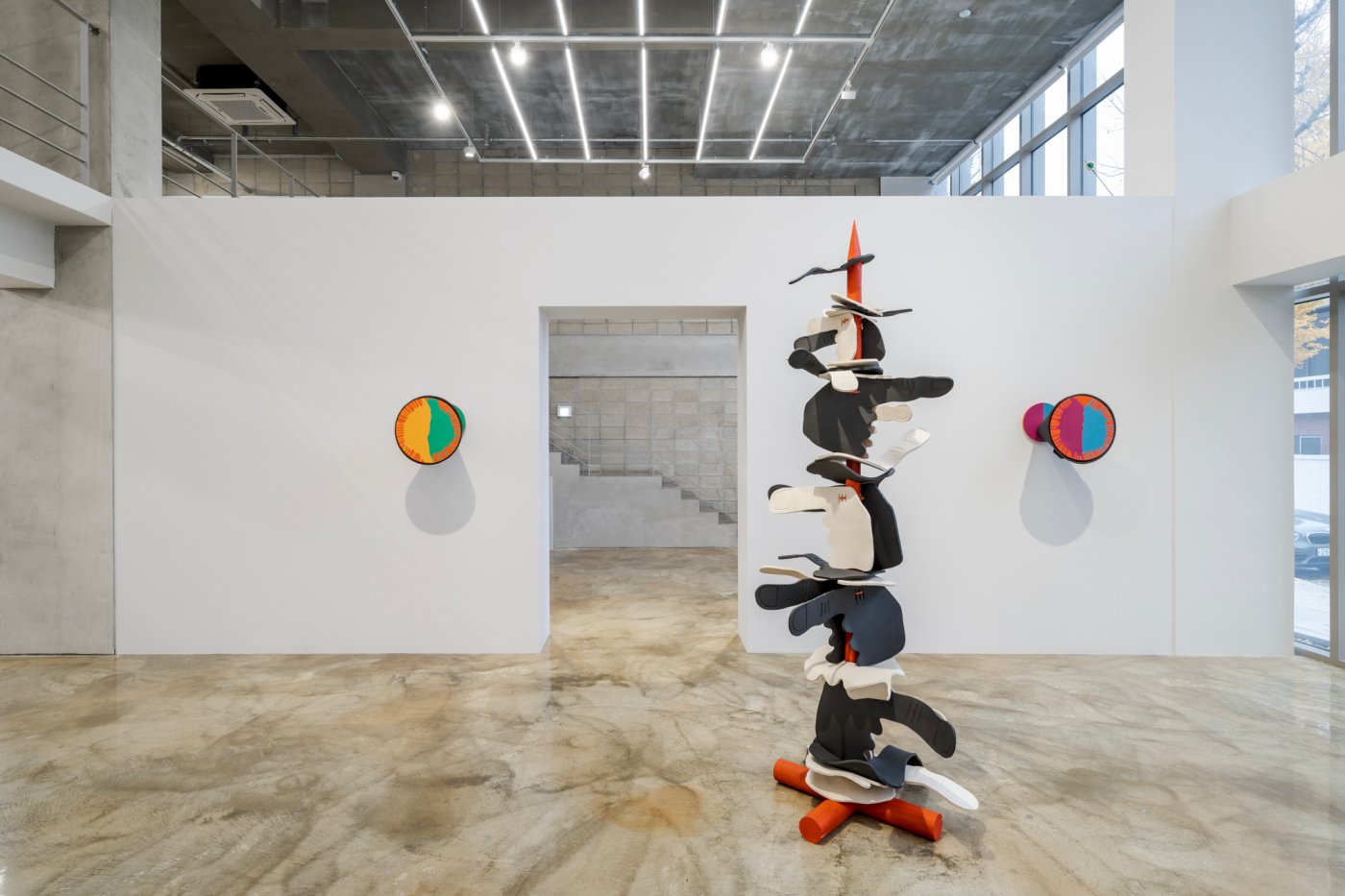 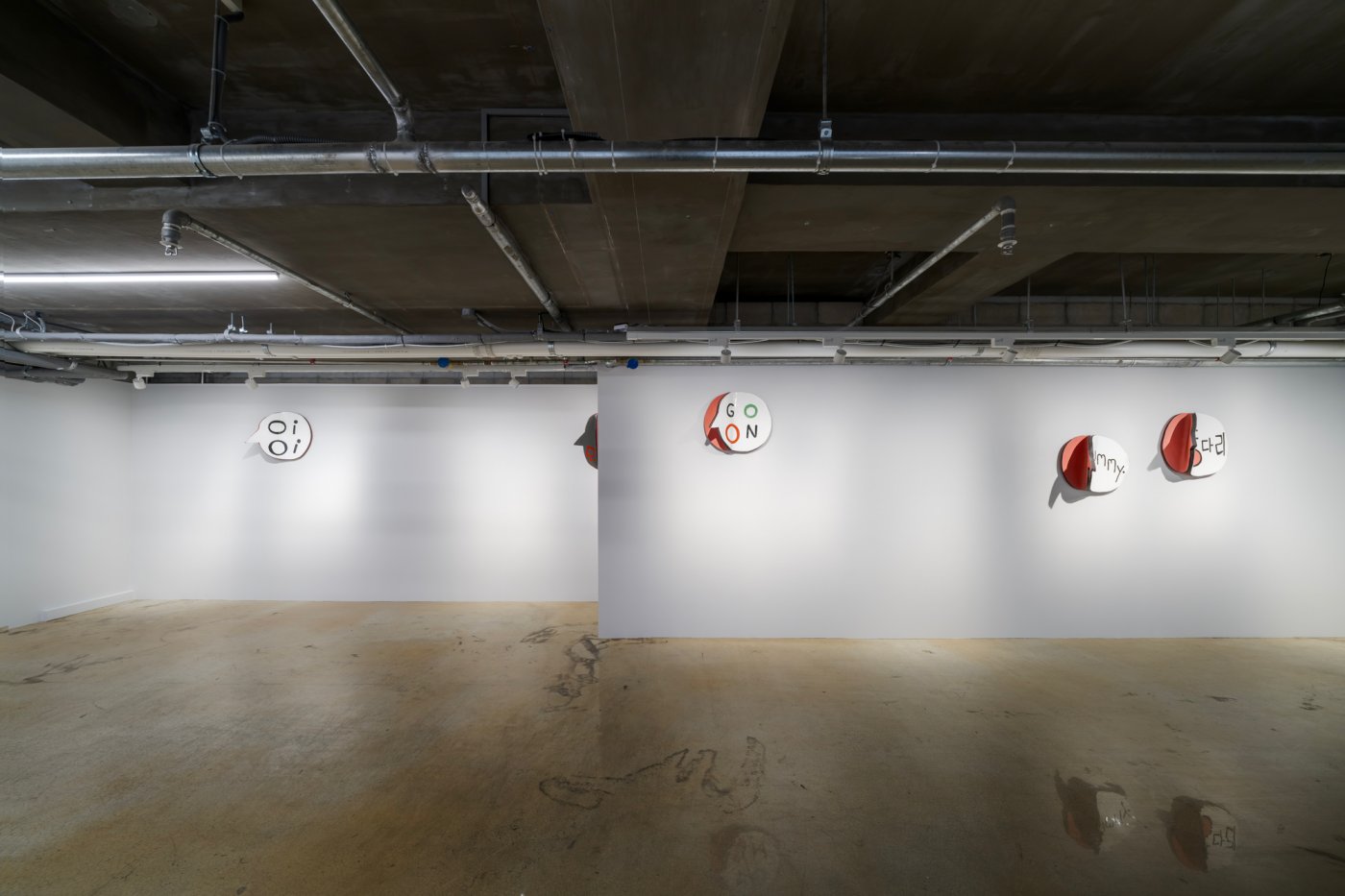 BIG MOUTH explores how human society uses verbal and non-verbal sign systems for its communication and, at the same time, takes them as a measure to criticize self and others while classifying its members into different social groups. These verbal and non-verbal systems include not only language itself but also voices, intonations, speech acts, facial expressions, gestures, and postures—and more broadly, they extend to tastes and even cultures enjoyed by groups. At the center of Emma Hart’s work is the observation of an implicit hierarchical society where people are categorized according to their use of verbal and non-verbal language. In addition, Hart’s work reflects on human interaction among people and with society.

The artist’s work, which deals with the psychology that arises from hiding or revealing oneself through language and its use, is closely related to the way she uses materiality. In particular, Hart presents new work using stoneware for the first time. The artist, who had doubts about decorating works after they are made, such as glazing and drawing patterns, is turning attention to making works by forming and building rather than decorating. Thus, the artist has used stoneware to create work that utilizes the raw material properties of the medium itself.

This is a different approach from Hart’s previous sculptural installation Mamma Mia! (2017), in which the artist connected human behavioral patterns with visual patterns and hand painted the works.

The title of the exhibition, BIG MOUTH, suggests to the artist’s own experience. With her working class background, she is conscious of her verbal and non-verbal behavior amongst other artists who are mainly from the middle and upper classes. The term, BIG MOUTH describes the artist’s experience of being in such an uncomfortable circumstance in which she is conscious of her different way of speaking and awkward self, coming to believe that she is a big mouth who talks too much. Noticing distance between herself and other artists and the pressure to act according to their norms, the artist expresses the ensuing anxiety in her work. In her artwork, she addresses her sense of psychological compulsion to behave differently in an art world that makes her feel alienated. The conflicted sense that she is not being herself, the feeling of being a “fraud,” and the anxiety that she may be “found out” as a fake, that is, the feelings of Imposter Syndrome are expressed as well. Hart’s work is an observation of individuality ignored, evaluated, and classified by the societal norms in British society where one’s behavioral style or one’s verbal traits such as tone of voice and words used reveal the region and class of origin of a person directly. Furthermore, the artist sheds light on the aspect of human society in which its group’s habituated behavior patterns which cannot be imitated and cannot be acquired through education, exist as symbols and as a form of cultural capital. As such, the artist shows through her work, how verbal and non-verbal signs are symbolic tools that people use to form relationships in society, and how individuals come to see themselves through the perspectives of the signs. In that sense an individual’s reality inevitably exists as a sample of the symbol. One may think these verbal and non-verbal signs are simply used by people, but rather they use people and perpetuate as their own form of power.

Just as eloquently asserting that language is a sign of communication, the exhibited works of Hart speak as a kind of playful sign. The sign may seem simple, but at an unexpected moment, it throws a humorous yet brutal comment on the reality of human communication and leaves the audience perplexed. Hart creates a situation in which her work presses the audience to act in a certain way, and the seemingly static work pushes into the viewer’s personal realm. The audience will have different standpoints depending on where they are in the exhibition space. The bright and bold colors mixed with the straightforward materiality of stoneware have the effect of transforming the familiar objects alluded to in her work and rendering them strange. The work’s unique form makes the viewer confront particular situations or feel specific emotions. It is an experience where the viewer does not simply absorb what an artwork means, but senses the situation they are in while being and moving in the same space as the artwork.

Hart’s initial idea for the exhibition in Seoul was an installation in which sculptures in the shape of a hand and a face were pressed against the wall of the exhibition space. However, the artist thought that the sculptures on the wall would not interact with the audience and would be the object of appreciation as finished products. The artist thus created a work in the form of a signpost, to create a spatial experience in which the relationship between the work and the audience shifts depending on where each viewer is situated. Other works, though installed onto the wall, also approach the audience. The works interact with each other, and the audience is in the crossfire of works taking action on one another.

The exhibited works are in the form of [Fingerpost]s, which indicate direction while also pointing at people; [Target]s, which become a target when stared at when a “difference” is noticed; [Bat]s, which express the phrase ‘bat around’ with double meanings of ‘strike something repeatedly’ and ‘talk about something’; [Megaphone]s, which amplify the human voice while also symbolically representing situations where “unrefined” language emerges from someone despite themselves. The [Speech Bubble]s express a dual state and psychology in which a person’s inner and outer sides are separated, when one feels that they do not fit in with a situation or a group because of the way they speak. For the Korean [Speech Bubble]s, the following Korean words that relate to this state of mind were used: 양다리 ‘yangdari’ (Two-timer), 입방정 ‘ipbangjeong’ (Loose Lips), and 이면 ‘imyeon’ (My Dark Side).

The [Fingerpost], You’re All over the Shop (2021), Social Climber (2021), and Look You Up and Down (2021), each exhibits different characteristics as they point in different directions. They are signpost fingers that indicate the proper direction, but they are also censorious fingers that point out inappropriate behavior. Within the gallery, these signposts provide instructions on how to behave, while also applying pressure on the viewer. The fraught experience of having to follow so many indicators triggers a sense of chaos. If we do not follow, we will lose our way; if we do follow, we may reach the place we want to go. But if we are someone who does not fit in at our destination once we arrive, we find ourselves facing the stares of others. Depending on where they are, the viewer may be the one pointing the finger or the object of its criticism. They could be the person who finds the way, or the person who goes wherever the signage points in a confused state without knowing where to go.

The [Target] work, Big Mouth (2021) shows us a collection of targets suggestive of faces or faces suggestive of targets—representing the situation where we become the target of other peoples’ glares as the characteristics of our speaking style and intonation are revealed. It compares the situation in which a person is “found out” as being unsuited to a particular situation or coming from a particular place, or a situation in which attention is focused on being classified as a ‘certain kind’ of person as ‘the process of being struck by an arrow’. The work represents a situation when, we conceal our own qualities and imitate the verbal and non-verbal sign patterns accepted in those settings, in order to survive in a specific group or circumstance.

The [Bat] series comes from the phrase ‘bat around’, which has a dual meaning of talking casually about something and physically knocking something around. Representing an exchange of words as a situation of two people battering each other, the work illustrates an inherent violence in a dialogue process. The “bat” in the exhibition is ready either to strike up a conversation with the viewer or simply to strike them. The two meanings of “bat” are used to show the implicit coercion whereby others are labeled by certain linguistic and non-linguistic signs and forms and compelled to behave in ways that meet those “standards.”

The [Megaphone] works, Feedback (2021), Crying Shame (2021), Drama Queen (2021), and Spoiler (2021) relate to split duality, which is a general theme in the artist’s work. Alluding to the ways in which we represent ourselves to the world, these works have a presentable face speaking into a megaphone. But the sounds that blast from these presentable faces are disorderly and twisted. They represent times when we must speak in a form of language that we are not accustomed to, the instances when we say things with no connection to our own thoughts or identity, the embarrassment we feel when we say something inappropriate or unsuited to a situation, or the anxiety we feel when we worry we might do so.

The [Speech Bubble] works similarly explore the dual identity, divisions, and separations experienced by an individual existing in two different worlds. Using faces with an inner and outer side, they show the dichotomous state and mentality in which we become divided into “inside” and “outside” by the self-conscious sense that we do not fit in with a situation or group because of the way we speak.The exterior of the [Speech Bubble] is glazed and glossy, but the inside is coated with engobe without glaze to express the raw inside and the shame. It also shows a detached state of mind when one has to speak in an unfamiliar way. The speech bubbles, Raver (2021), Dummy (2020), GO ON (2021), Oi Oi (2021), and Lies (2020) employ words and expressions related to this situation. The Korean speech bubble works use words such as 이면 ‘imyeon’ (My Dark Side) (2021), 입방정 ‘ipbangjeong’ (Loose Lips) (2021), and 양다리 ‘yangdari’ (Two-timer) (2021), which refer directly and indirectly to the sense of psychological division, to the dual self, and to speech style and class.