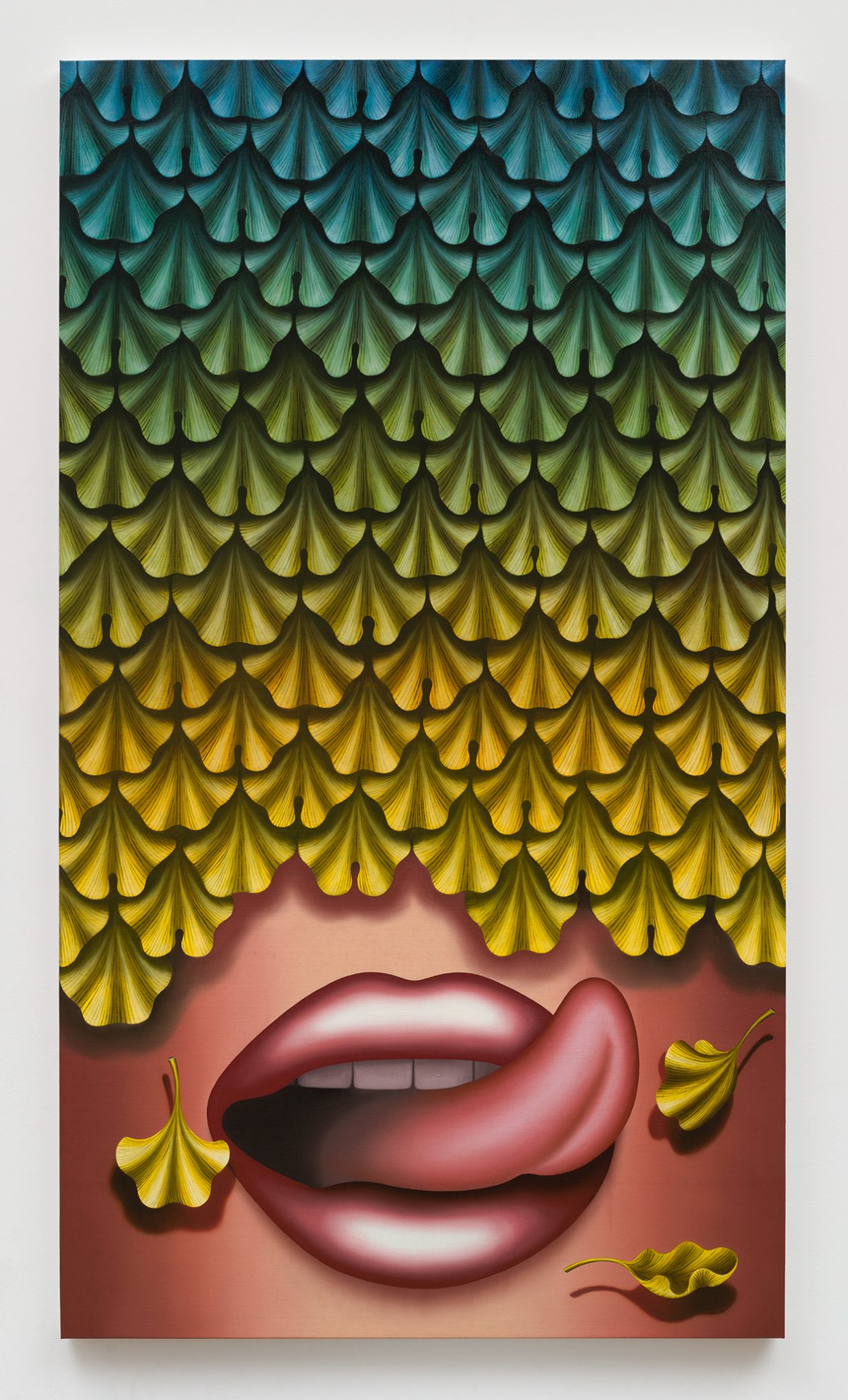 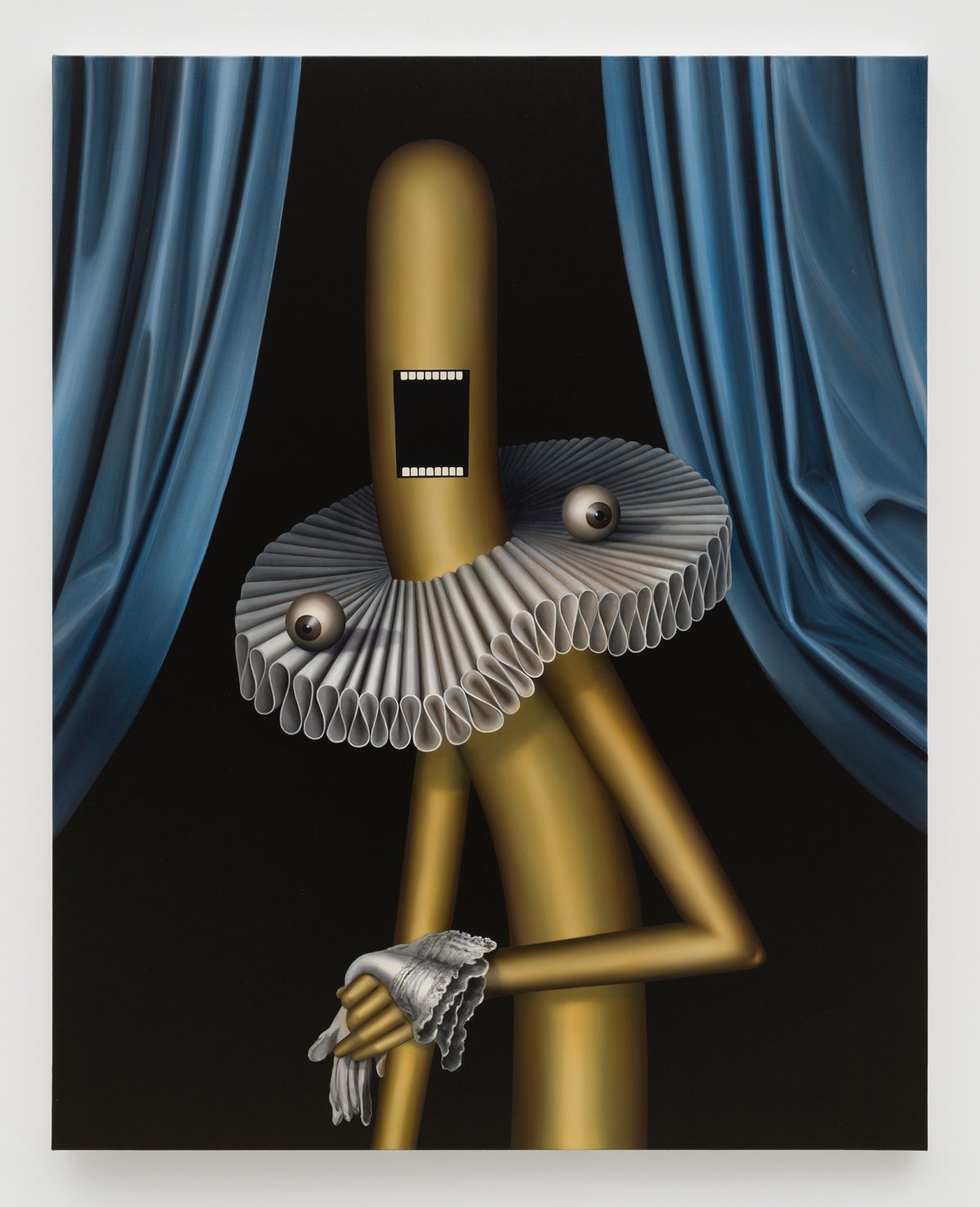 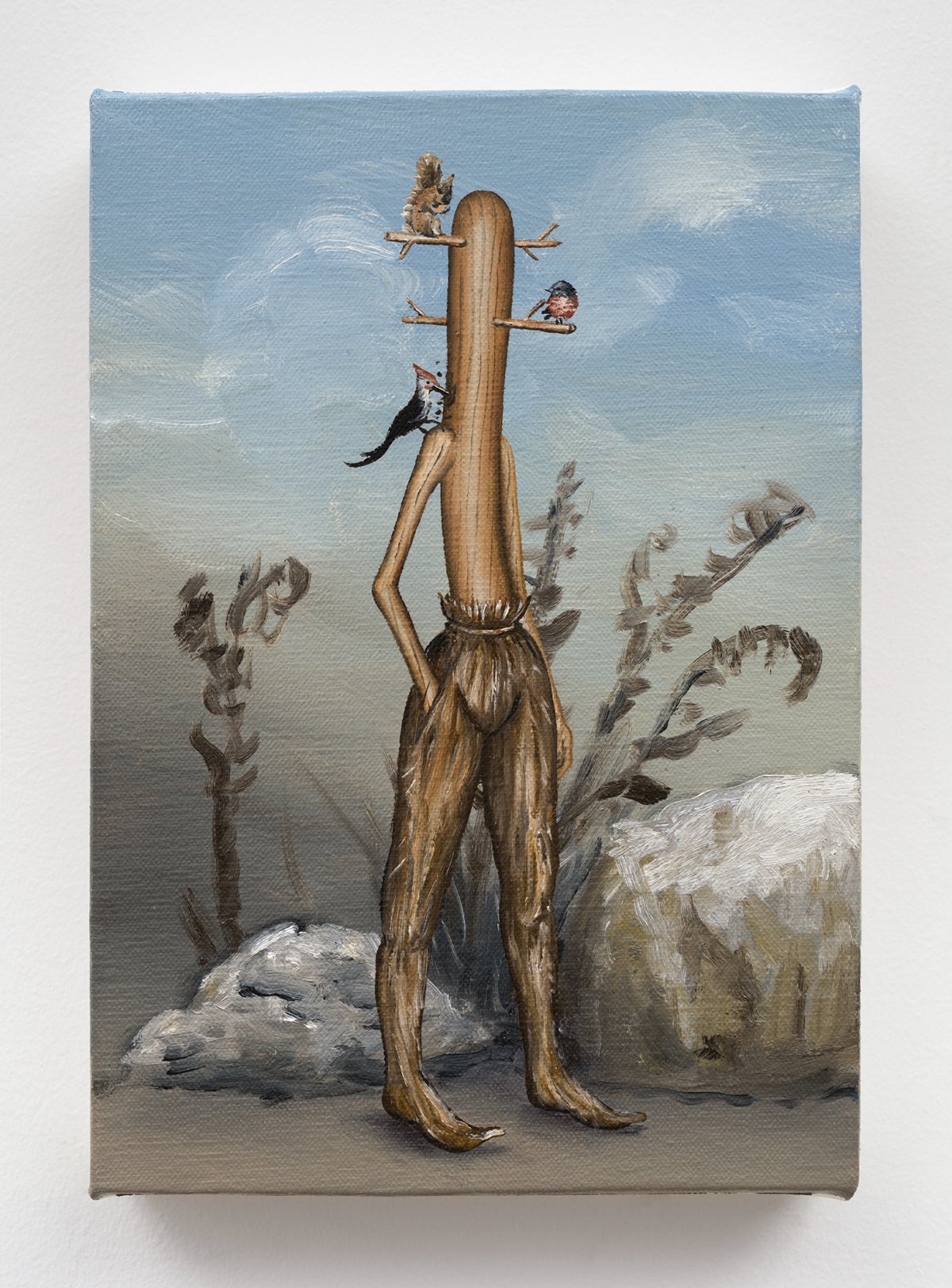 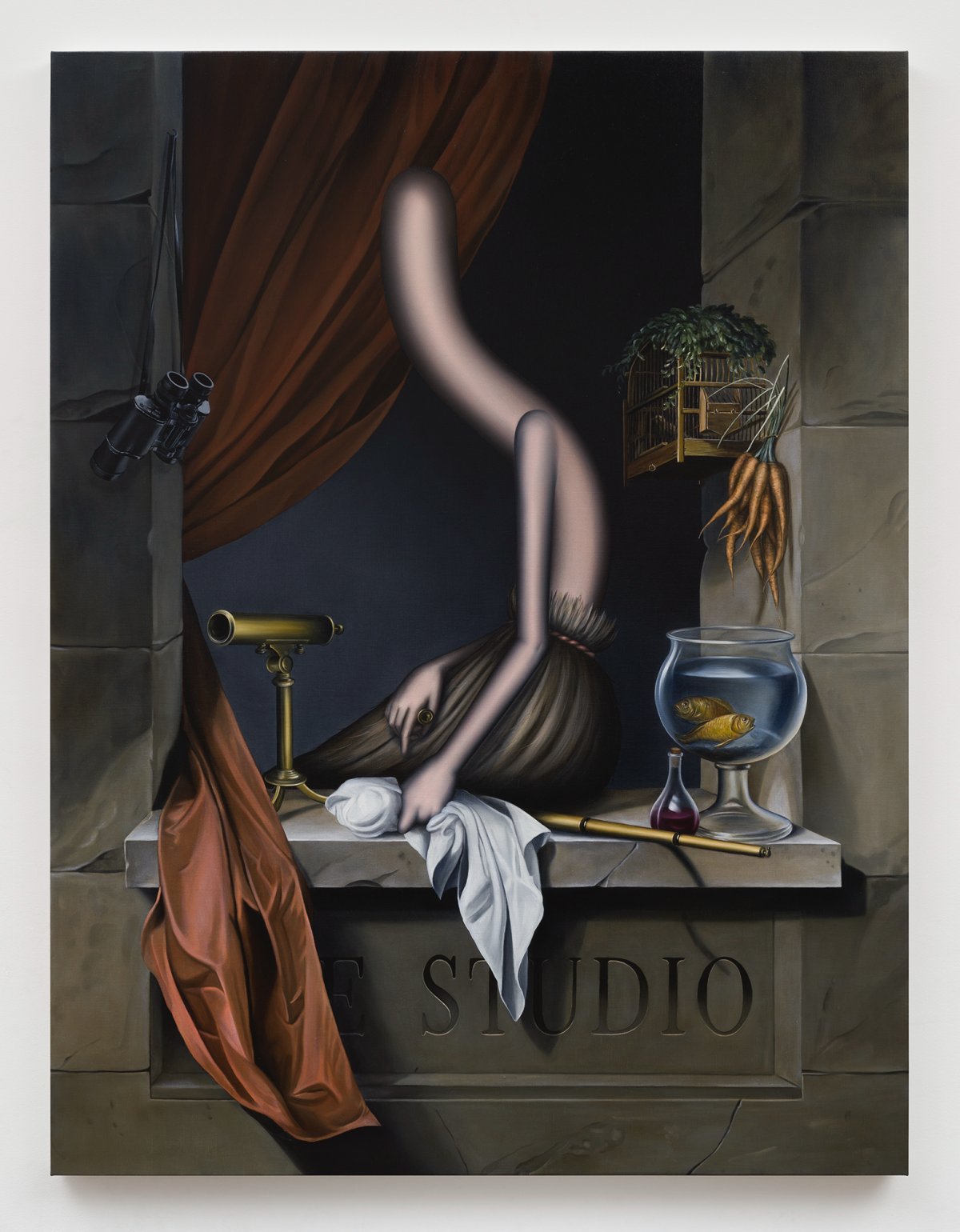 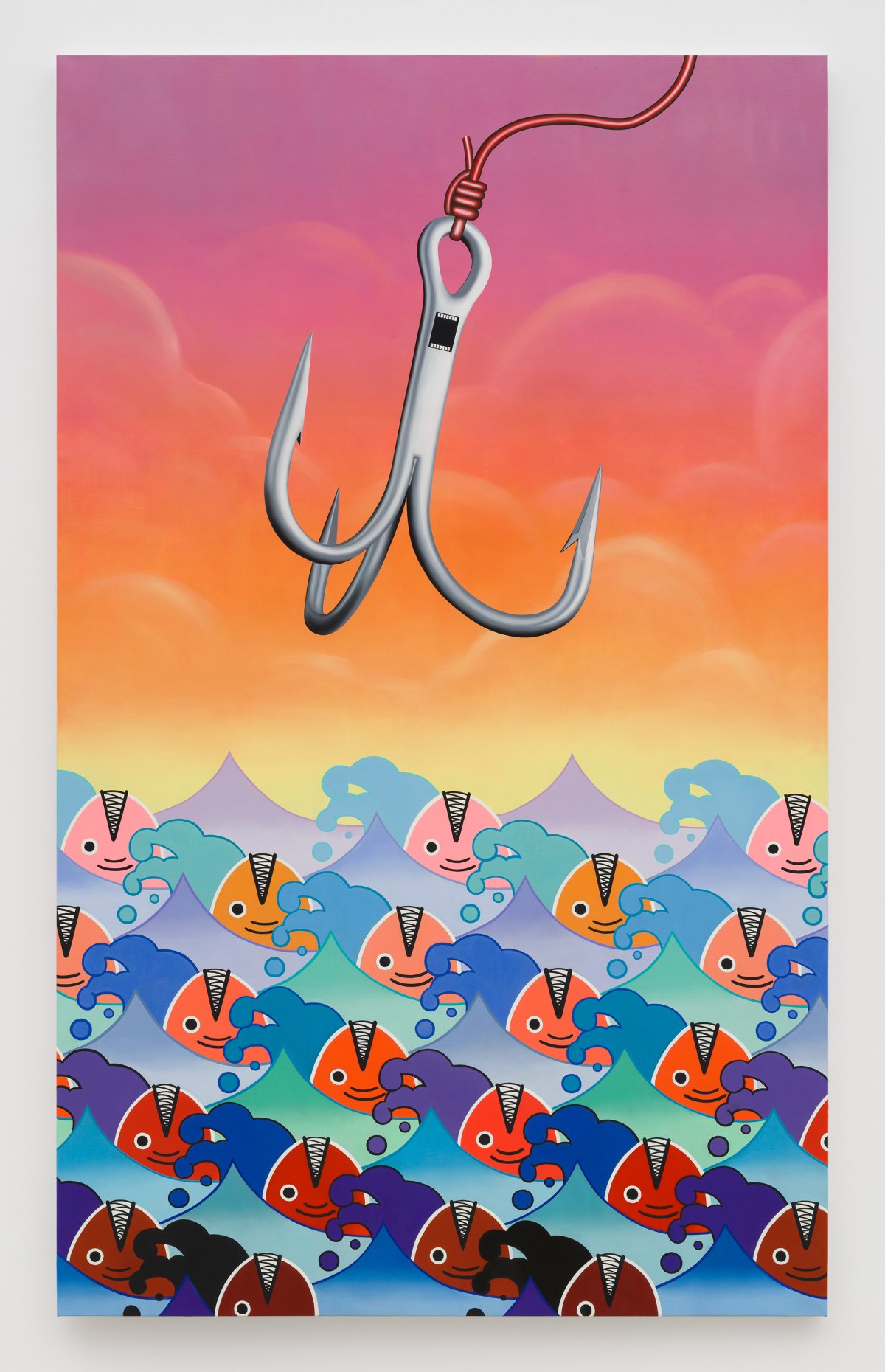 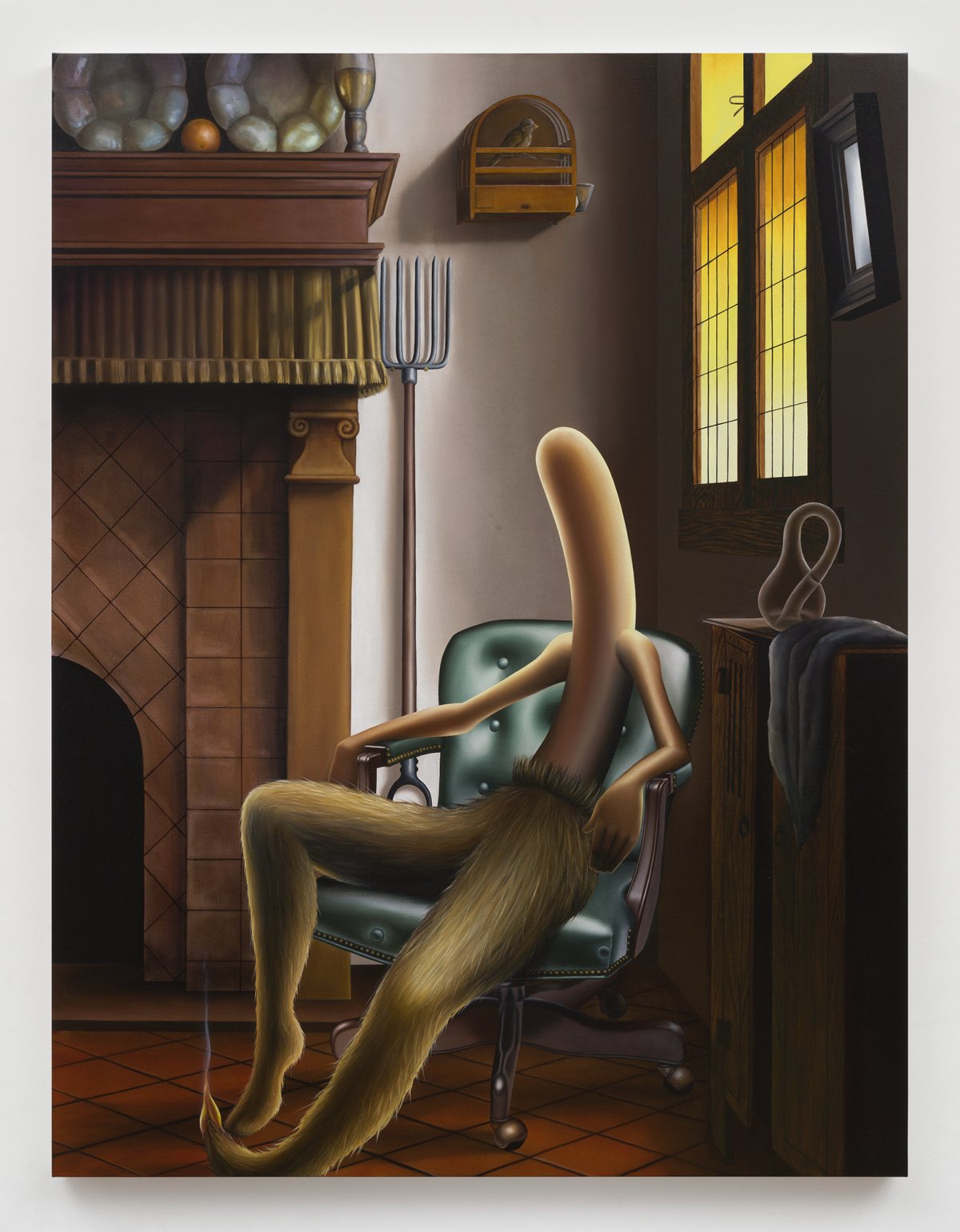 Emily Mae Smith
A Candle Makes its Own Fuel, 2022 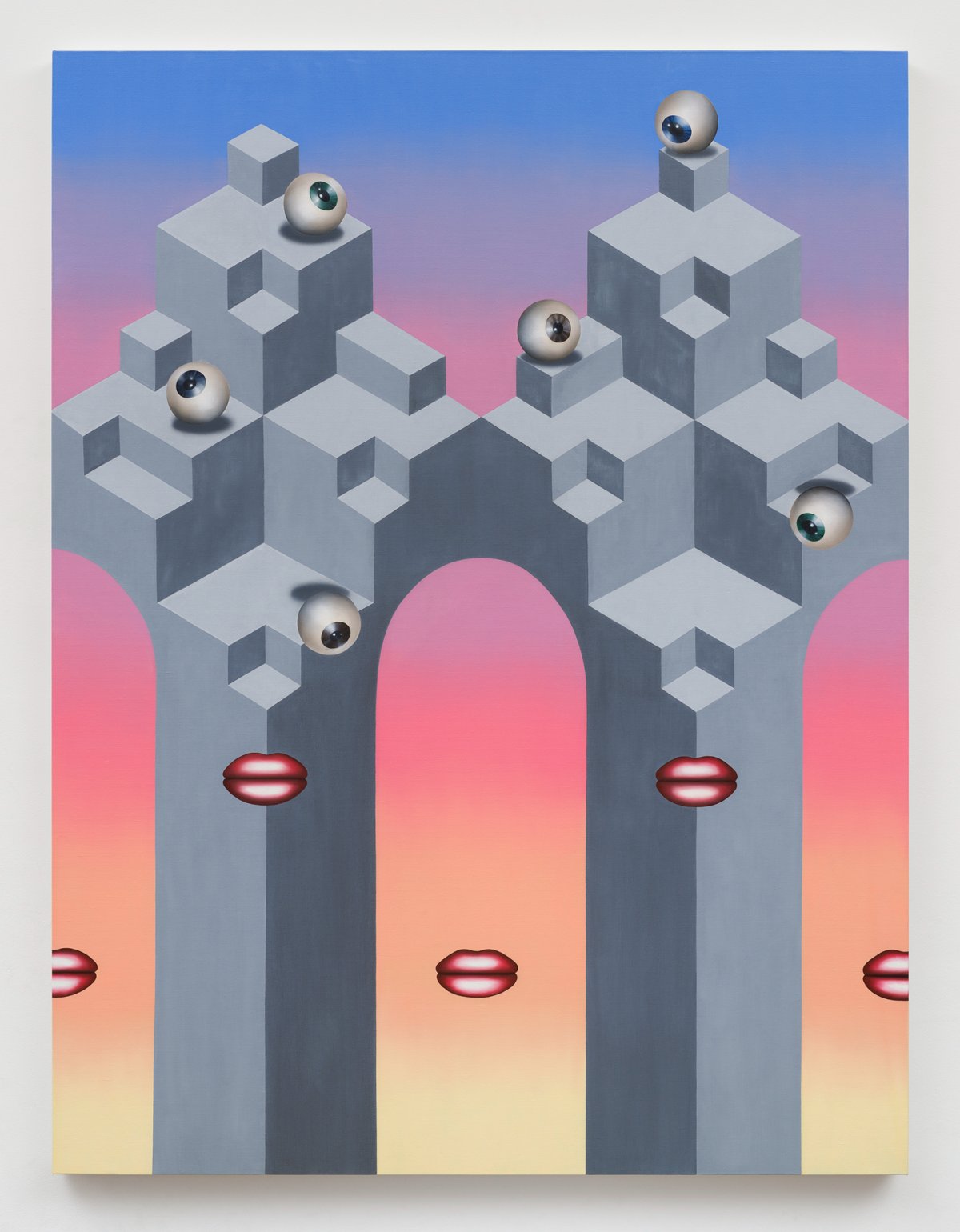 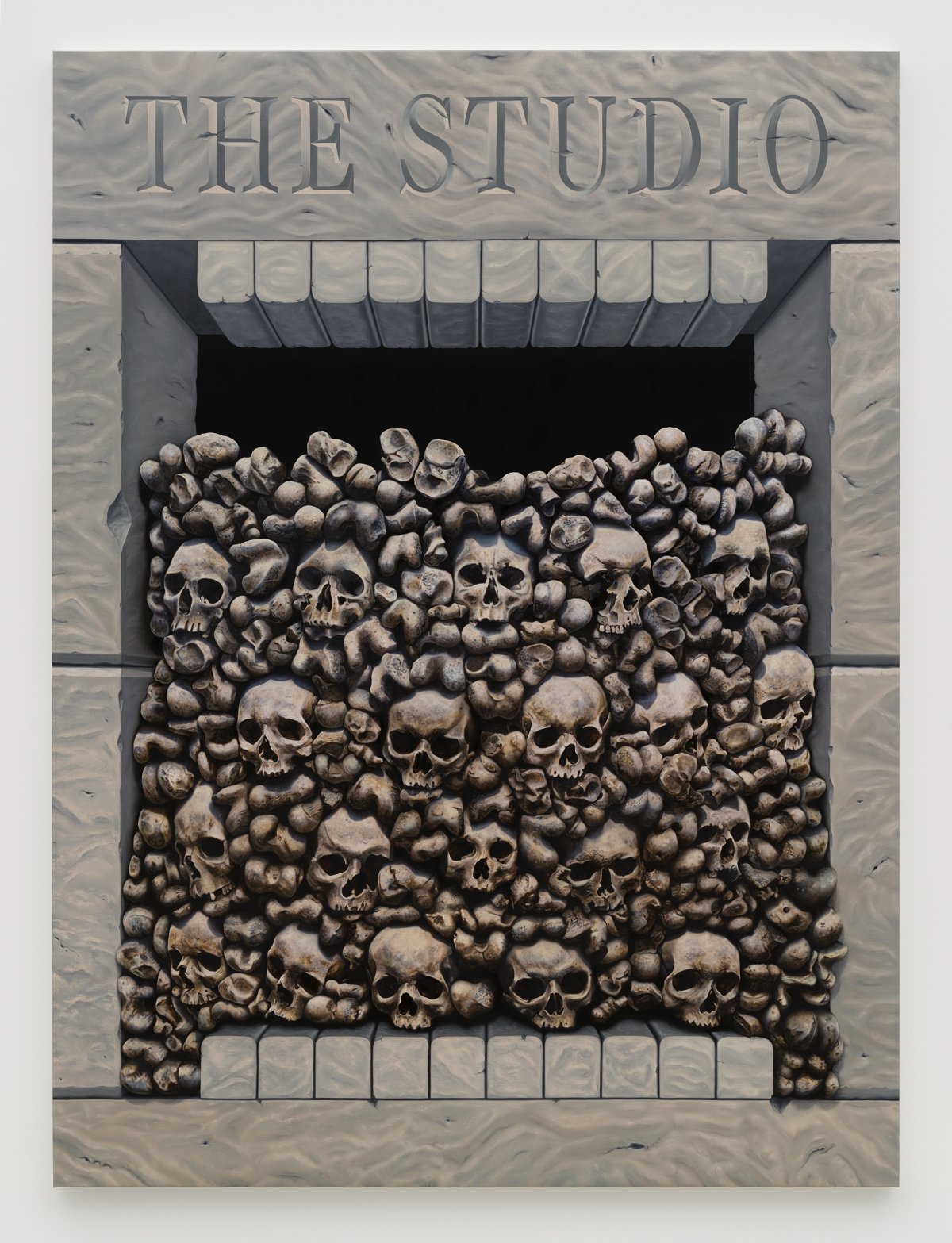 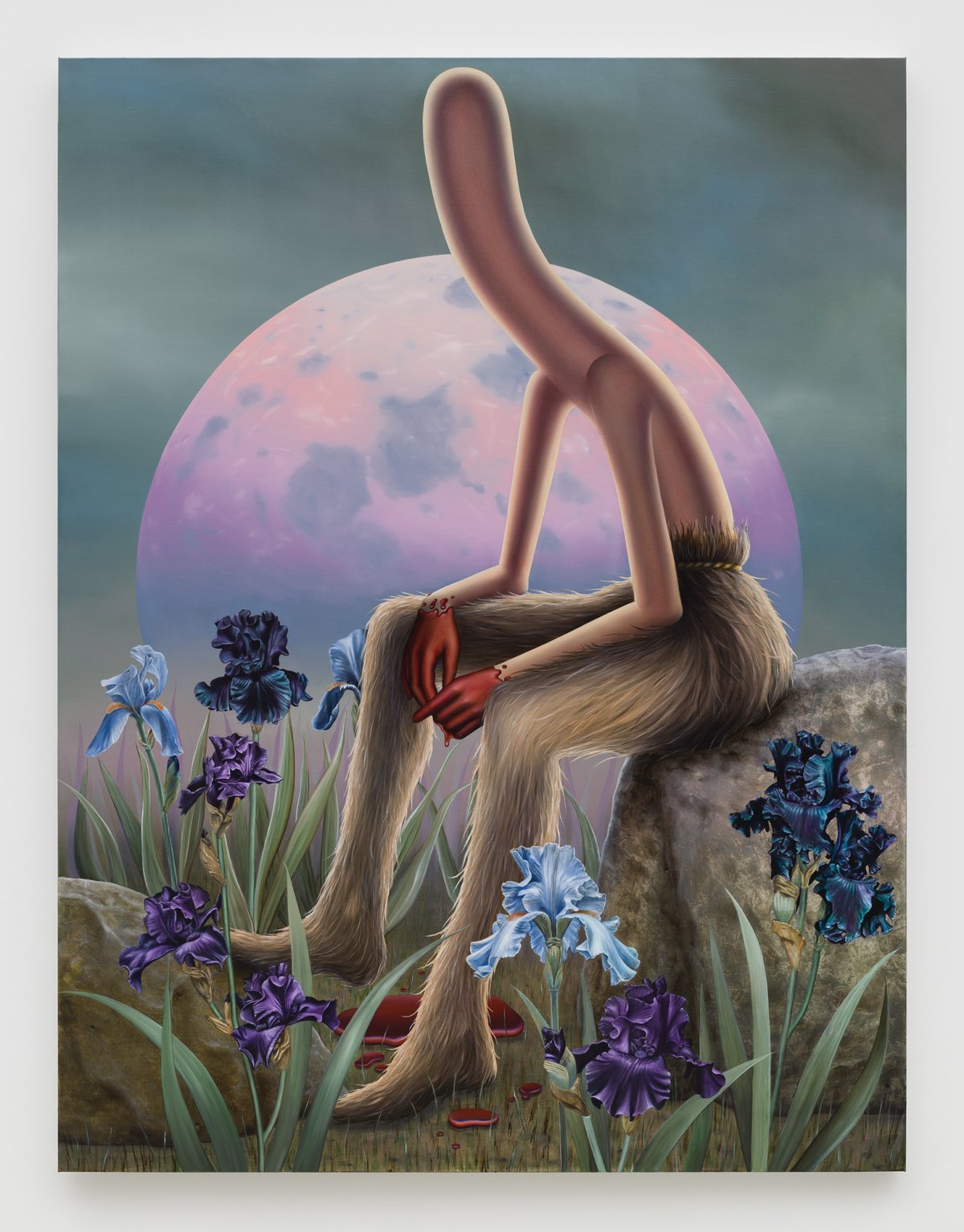 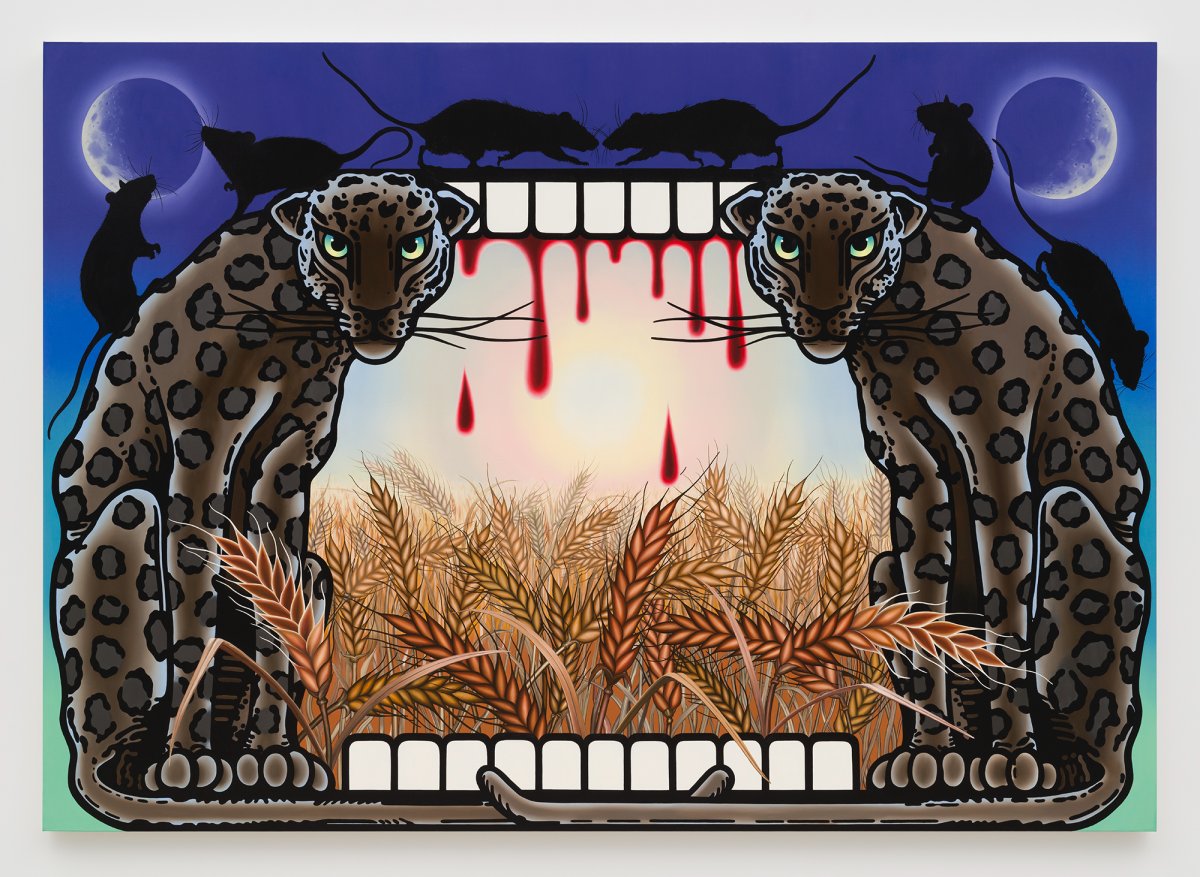 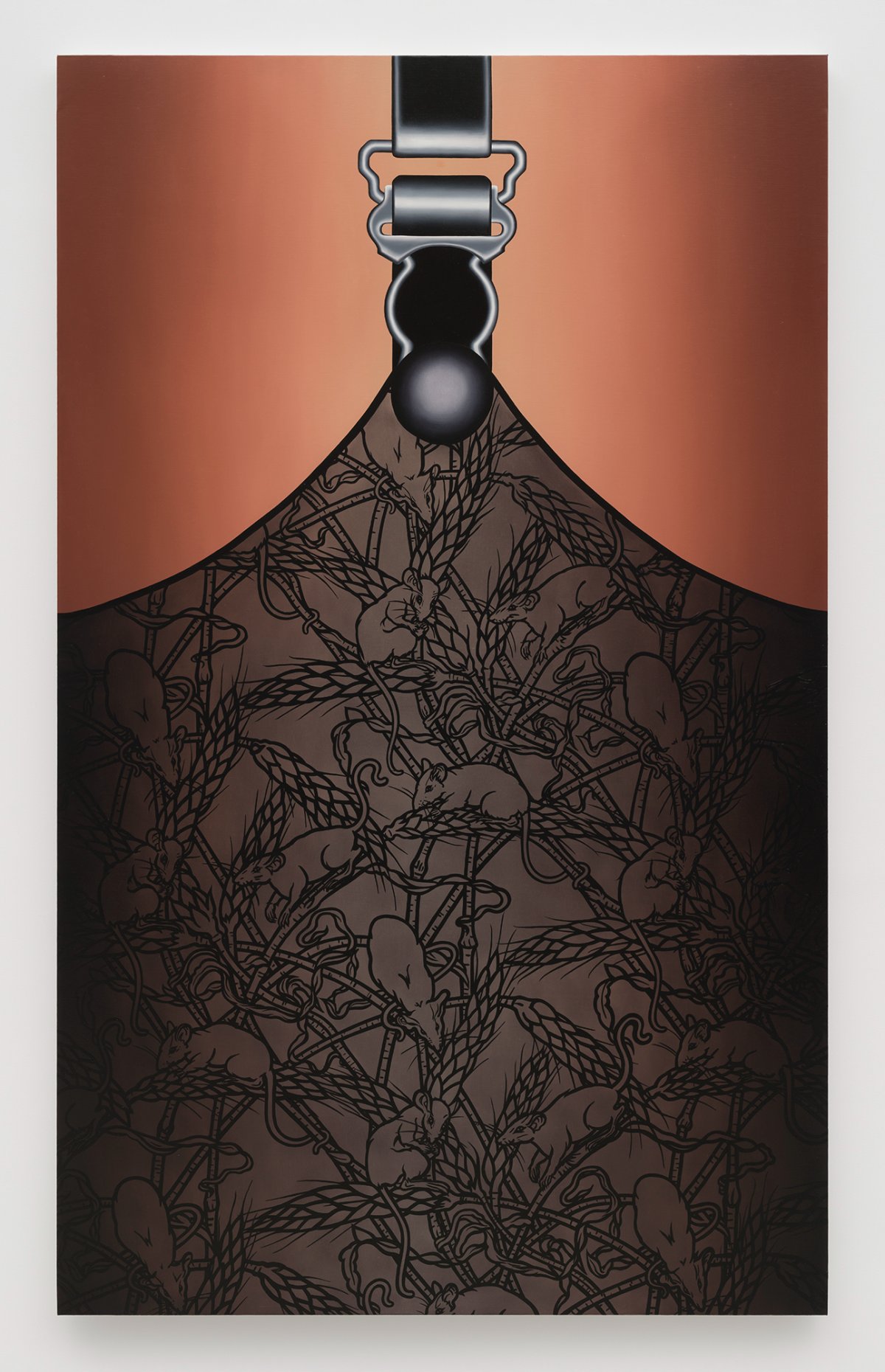 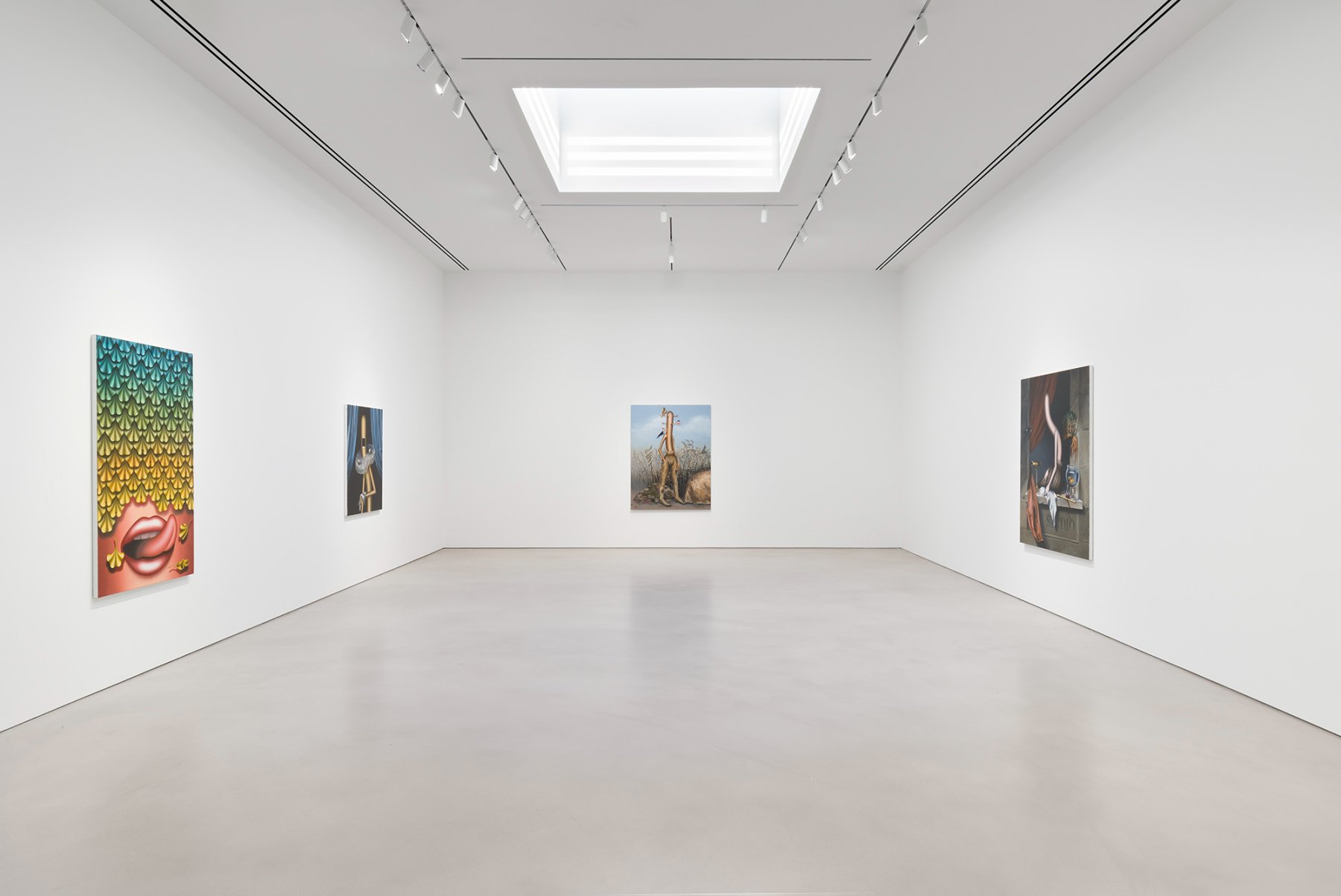 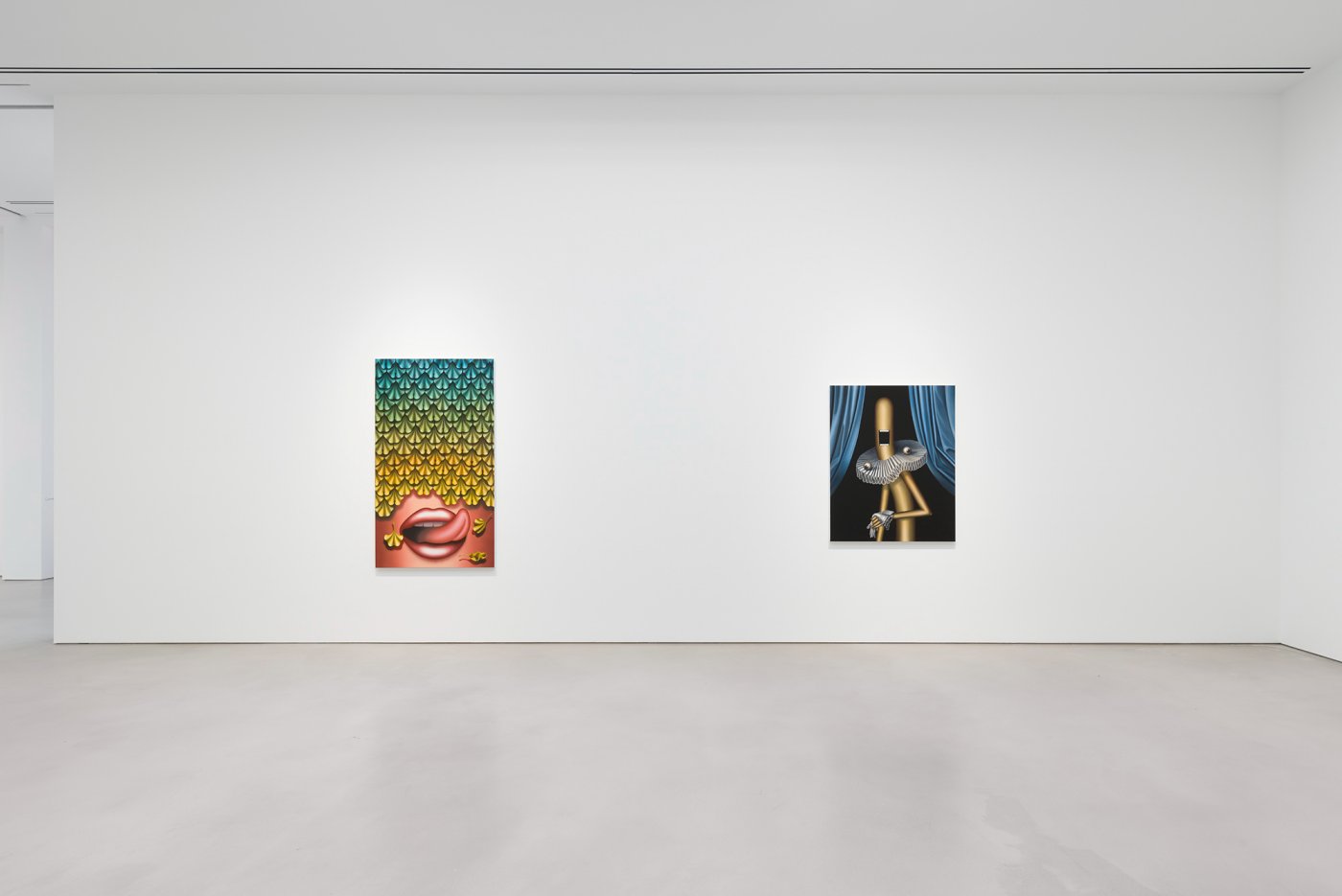 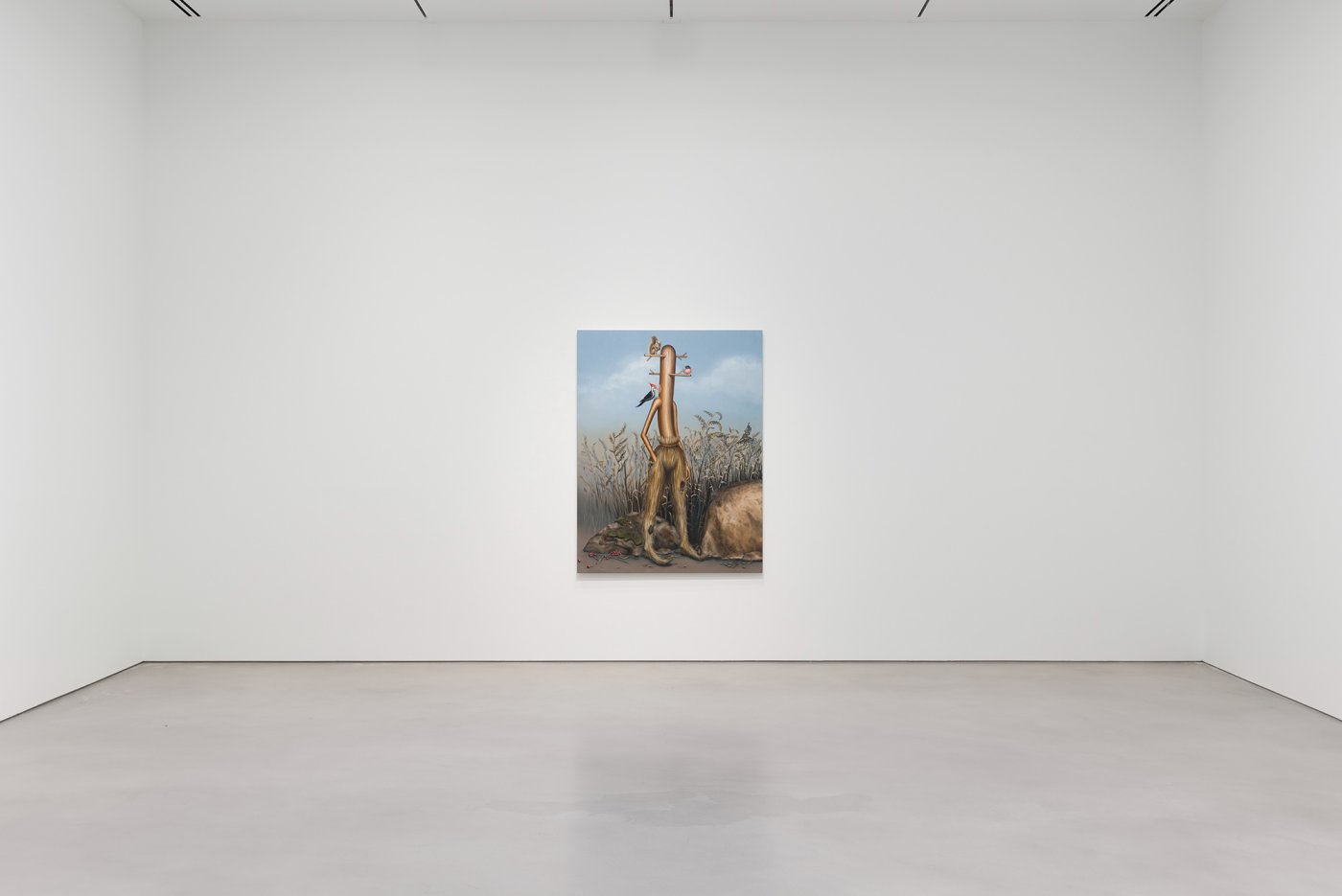 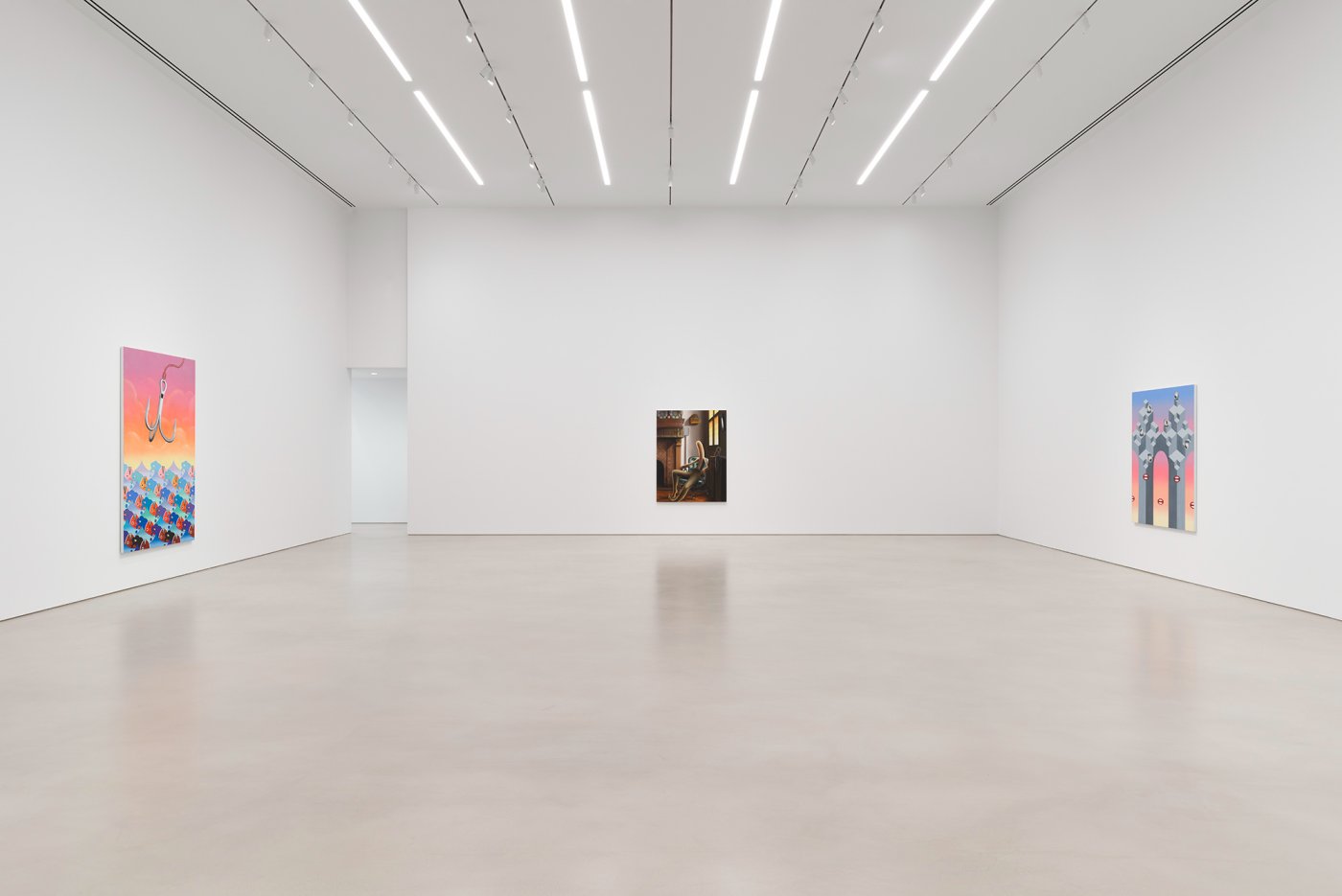 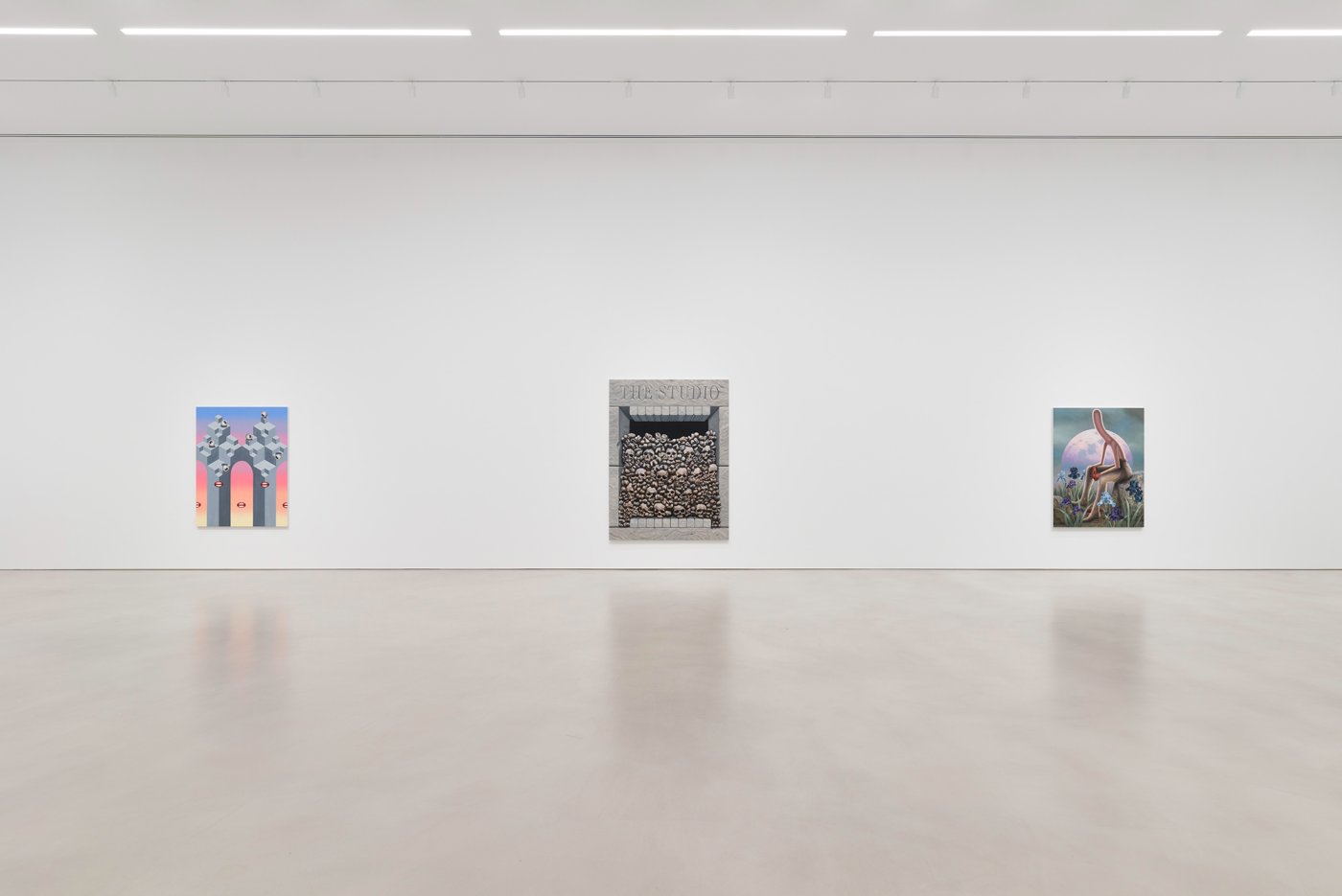 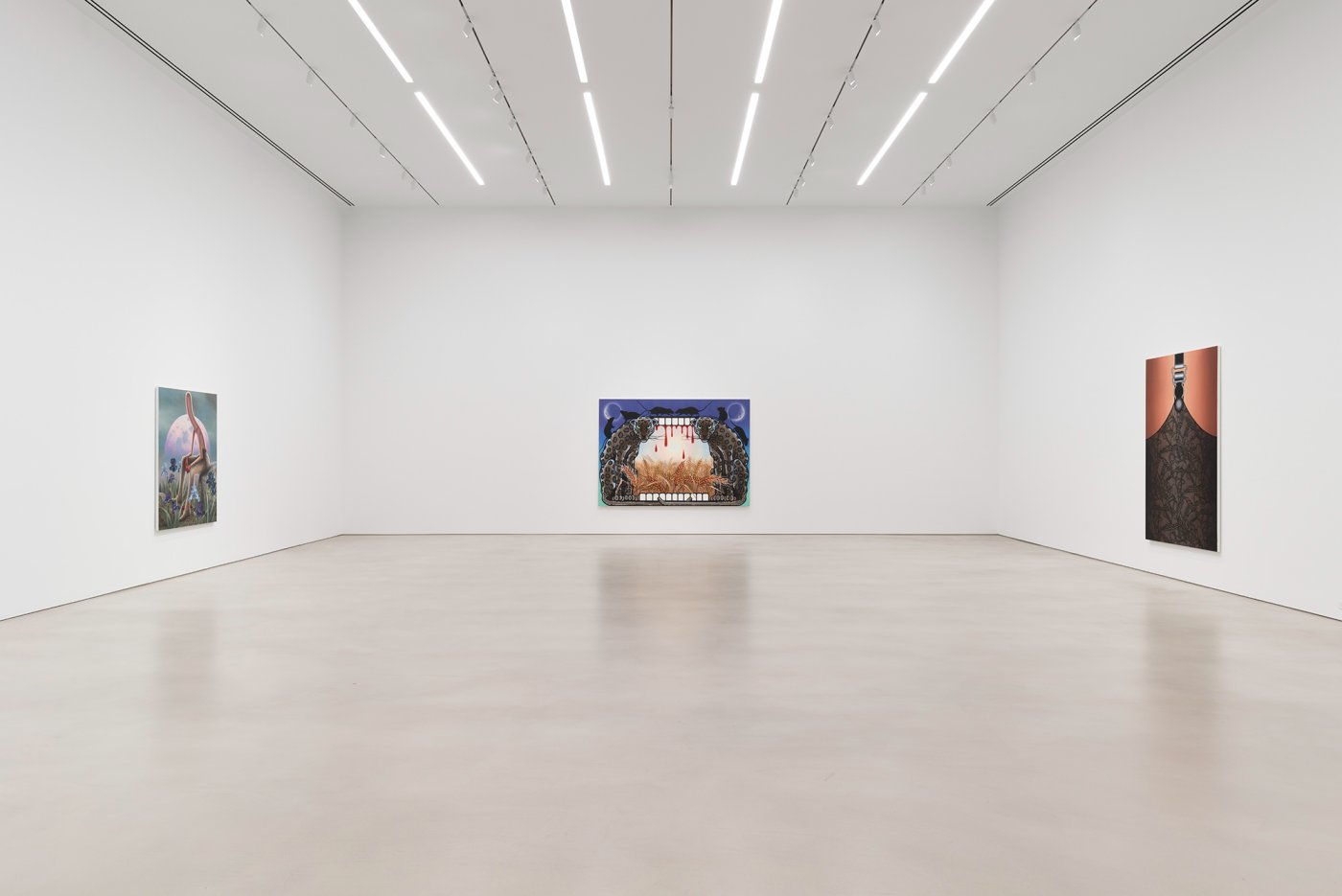 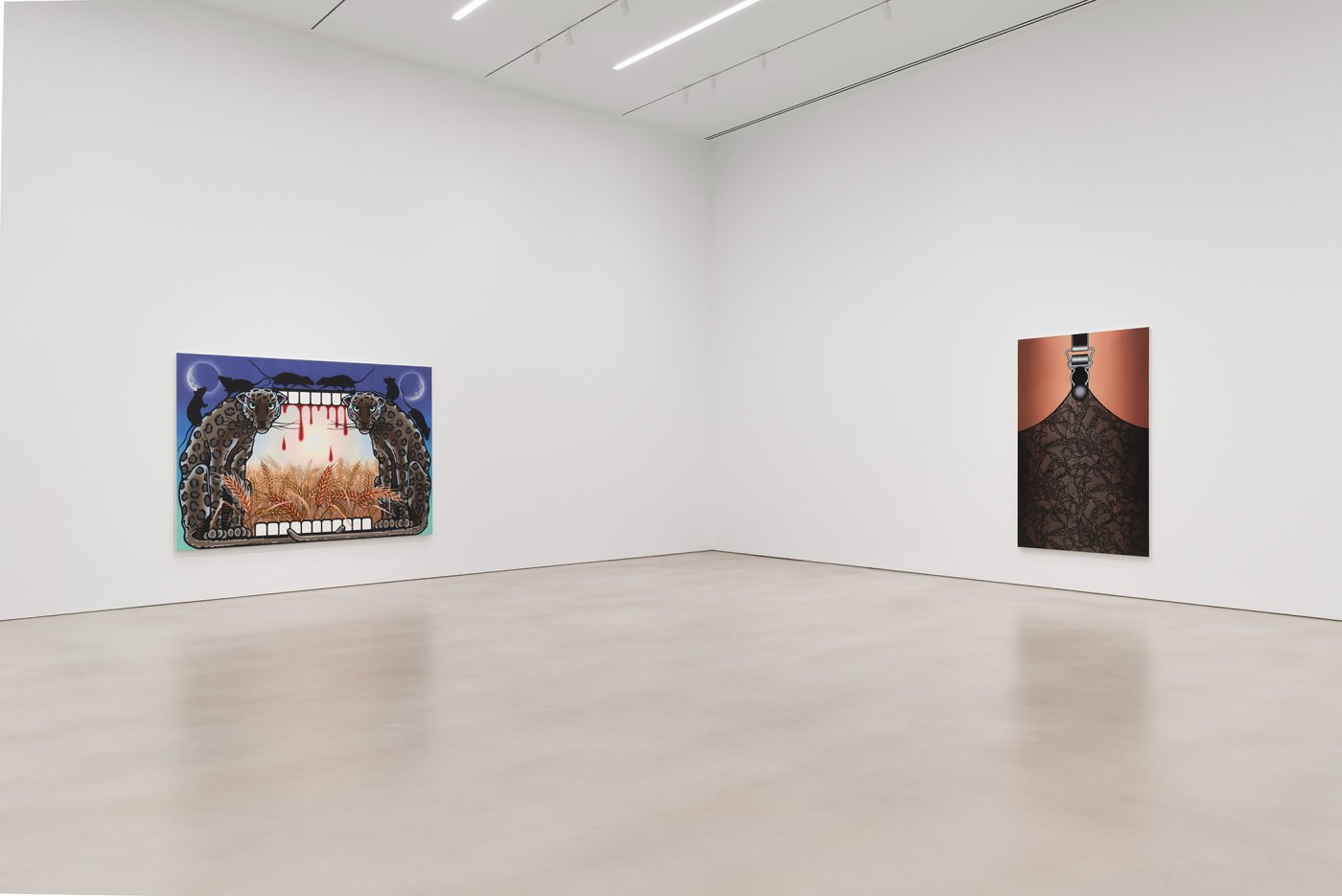 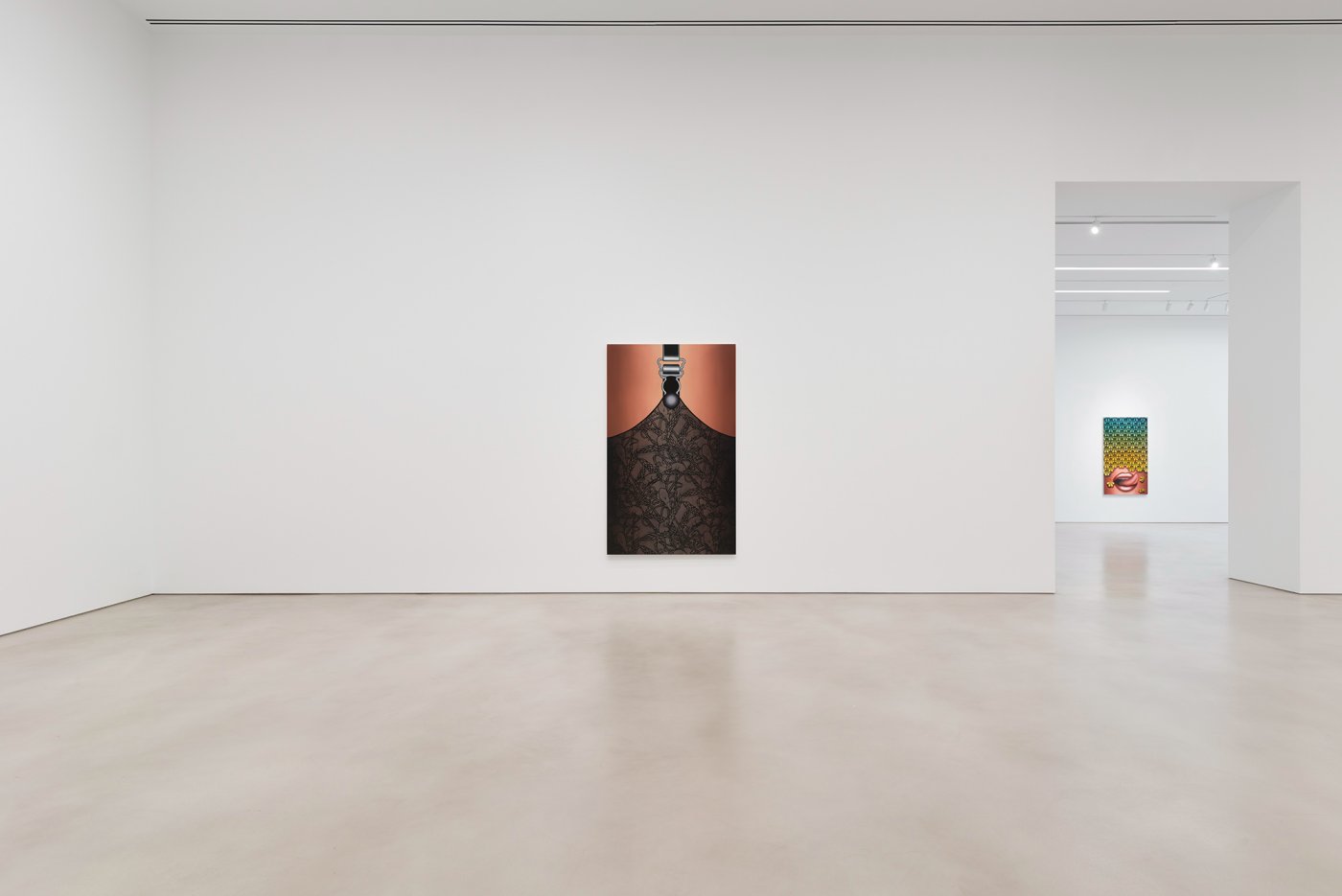 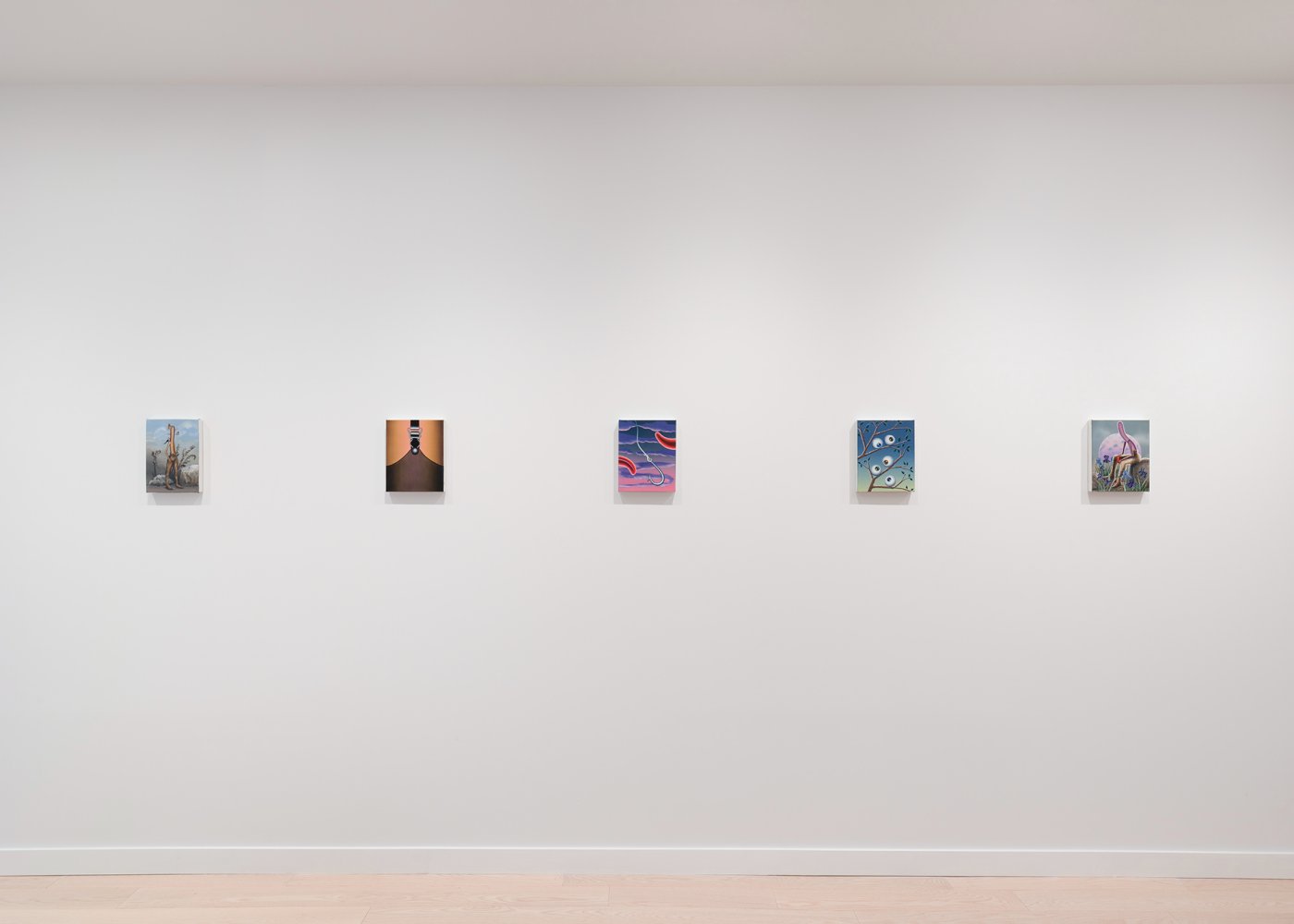 In 2014, Emily Mae Smith introduced a broom figure into her developing lexicon. A descendant of the sweeper in Disney’s Fantasia (1940), it might suggest a proxy for the artist. (Set to The Sorcerer’s Apprentice by composer Paul Dukas, which was based on Johann Wolfgang von Goethe’s 1797 poem of the same title, Mickey Mouse appears as the apprentice who unleashes forces beyond his influence.) Through this surrogate, Smith refuses the masculinist pretension of using the female body as a catalyst for formal experimentation while preserving its potential for mutability. Indeed, beyond the variability of its costuming—eyeless rods sport full skirts or pantaloons fashioned out of gathered bristles—brooms behave differently, most conspicuously laboring or refusing instrumentalization. They enact such roles within elaborate pictorial spaces. Representational orders organize within windows or recede behind proscenium curtains. These portals maintain optical fantasies of illusionism even as they redouble the physical limits of the support; they also further Smith’s critical manipulation of traditional framing devices.

In this recuperative possession of the phallocentric tools of vision underpinning so much Western art, she none too subtly claims the privilege of meeting the viewer on her own terms. In Beholder, for one, Smith makes over Louis-Léopold Boilly’s A Girl at a Window (c. 1799), a scene that stages conditions of visibility and displacement. As is not uncommon for Smith, she takes another artwork as the basis for her own, appropriating in the case of Boilly’s precedent a black-and-white trompe l’oeil rendition of a print seemingly imitating a now-lost painting (which, in a kind of infinite regress, itself makes over earlier Dutch genre scenes). Smith keeps hold of this artifice, its performance now a usurpation not only of mastery but also of agency. If the source assumed the naturalizing of control over its centered ingenue, Smith’s rejoinder sets the encounter within the studio, from which the broom emerges, seated on a niche, and turned to the picture plane. The various prosthetics—spyglasses and binoculars, and even the amplifying power of water in the conspicuous orb of a fishbowl—suggest the reciprocity of encounter, or at least the terms of its possibility.

Like so much of Smith’s art that queries the medium’s histories as well as her place within it, Beholder is a painting about painting, perhaps an allegory of making as well as regarding. It finds company in related pieces that eschew the abstract language of self-reflexivity endemic to modernism, perversely extending its logic of auto-critique through symbolist imagery. Painters Quarry makes this clear. An oversized instance of Smith’s mouth architecture—now greyscale stone rimmed with blunted Chiclet-teeth—bears the inscription “THE STUDIO,” and in it is an ossuary. Bones are piled nearly to the top, leaving little space left to fill. Very differently, Precarious Persuasion, a stand-off between a treble hook, diminutive mouth agape, and a menacing school of fanged-teeth fish, models for Smith the interactions between elements within indirect painting. (Smith uses this method to achieve shifts in hue and color adjustable independent of value and form: first working in monochrome and layering transparent washes through which light will pass—a twinned effect of seeing into fictive but also literal depth.)

For the namesake Heretic Lace, Smith reprises (and here enlarges) a 2019 painting of the same name. In both, a flesh gradient is cleaved by a garter belt, pulling taut a stocking patterned with rodents and sheaves of wheat. It, too, nods to process in analogizing the sheer legwear and transparent glazes that constitute it. Heretic Lace II also extends Smith’s recent interest in the gleaner, the subject of drawings, watercolors, and paintings made since 2018. Characterized as someone who picks up grain or corn left in the field after the harvest, the gleaner has served as a symbol of the dispossessed from the Old Testament (in the books of Leviticus and Ruth, the Hebrew Bible encourages allowances for the poor to glean in lands already harvested); in Smith’s hands, it becomes a way to get at her position, gathering and repurposing what remains. Smith’s protagonists recall the farmers of Pissarro and Jean-François Millet, and more broadly, a 19th century imagination of what work the bodies of women might be asked to carry out and the rights to self-determination they lack in so doing.

Based on Pieter de Hooch’s A Woman Nursing an Infant with a Child and a Dog (c. 1658-1660), A Candle Makes its Own Fuel substitutes the breastfeeding caretaker for a broom slumped in a tufted desk chair set upon casters but going nowhere. A Klein bottle—emblematizing a non-orientable surface—sits atop a makeshift pedestal; a pitchfork hangs on the wall by a fireplace. Absent de Hooch’s roaring blaze, Smith conceives of its consumptive energies as an act of self-immolating combustion at the broom’s extremity. The other light source suggests all is not well outside, either, as the gridded leaded glass windows at the painting’s right burn a sulfurous yellow. One can invoke by way of description Smith’s use of contre-jour, where the light source appears to come from behind the subject in the painting. As with the other works on view, this technical-cum-formal conceit implicates the canvas in the environment beyond its edges.