Maximillian William presents Embodying Anew an exhibition of work by Magdalene Odundo, Simone Leigh and Thaddeus Mosley, three artists who engage extensively with international creative practices to synthesize the aesthetics of a vast array of visual traditions within their work. 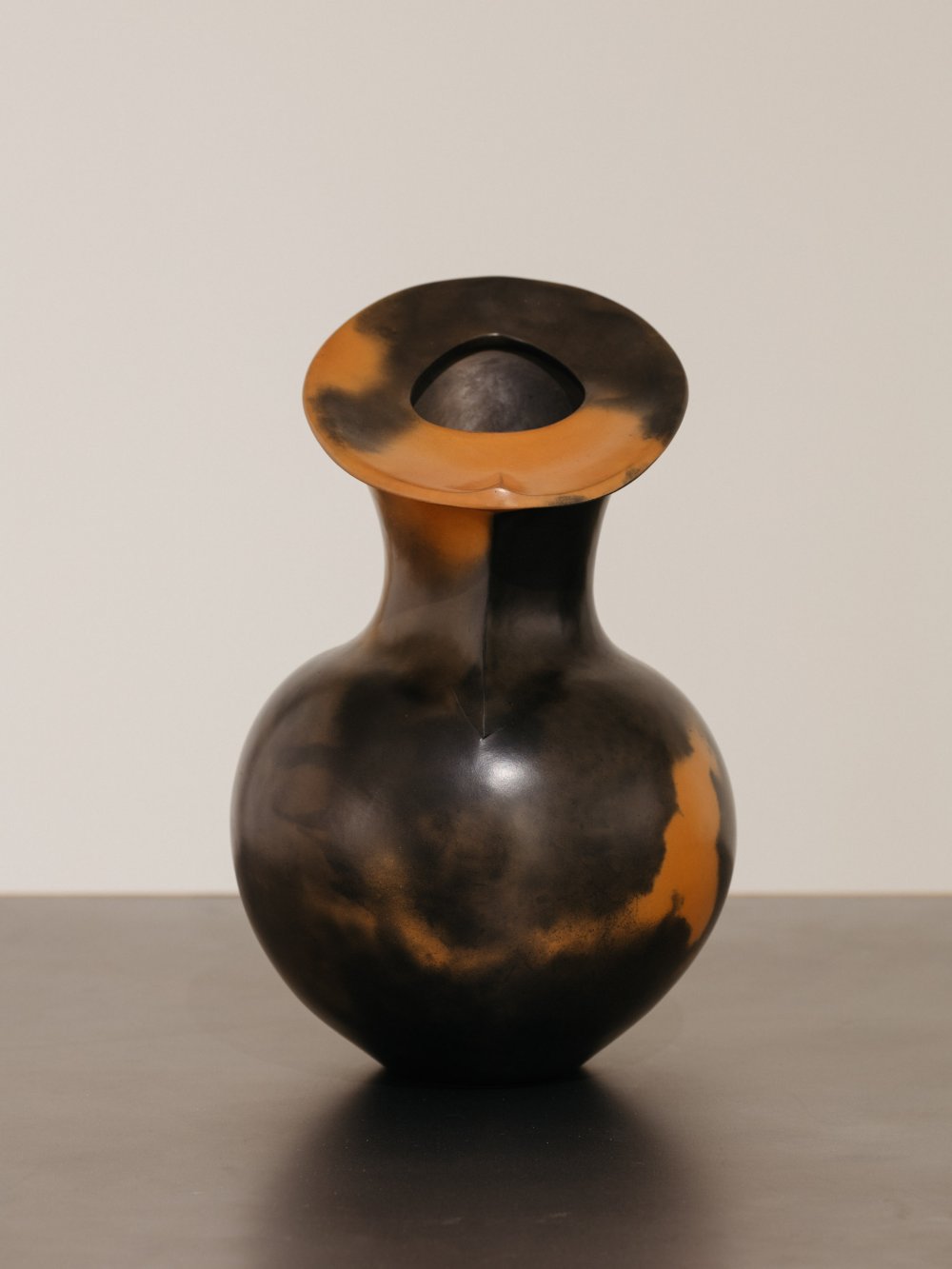 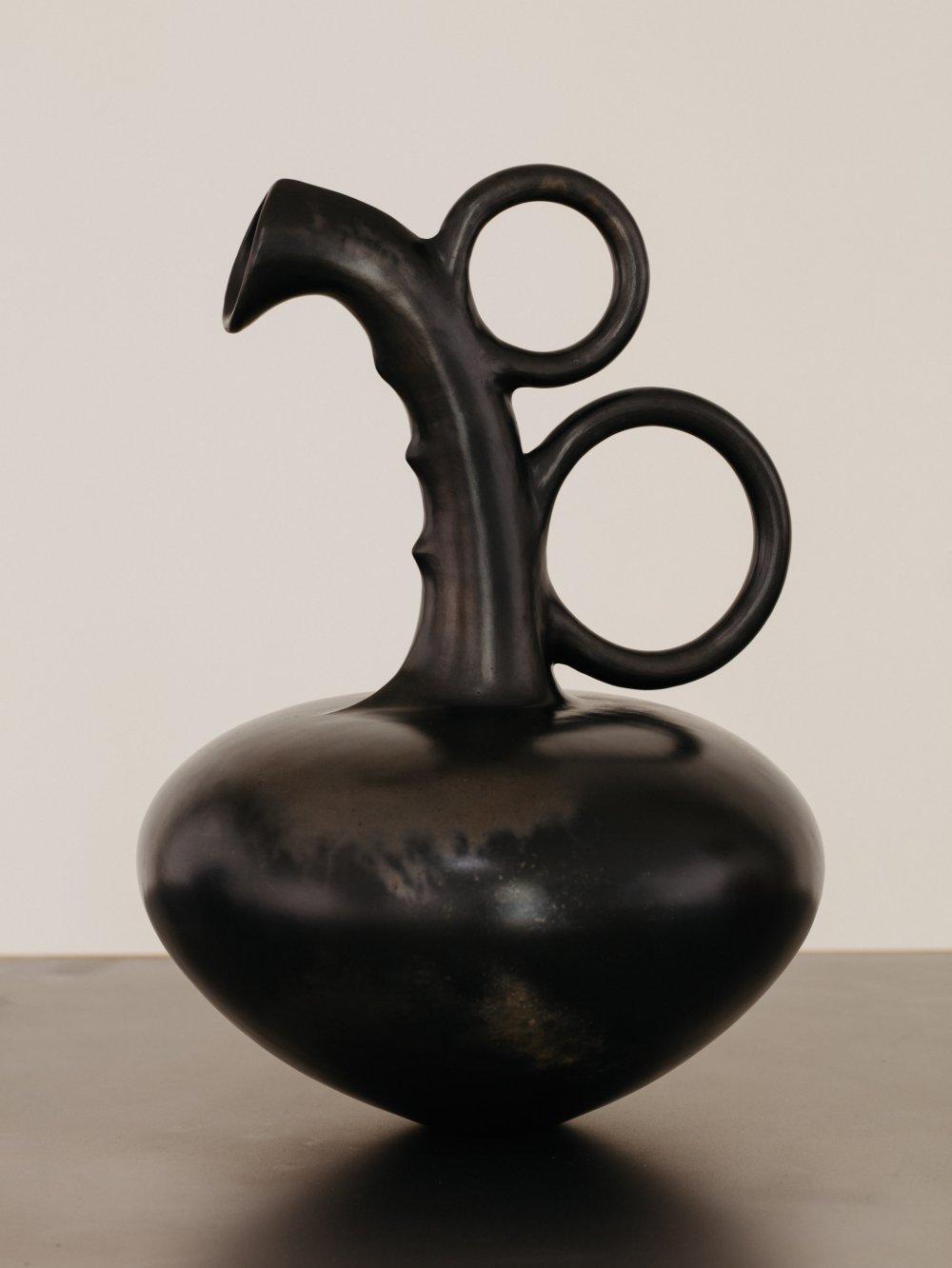 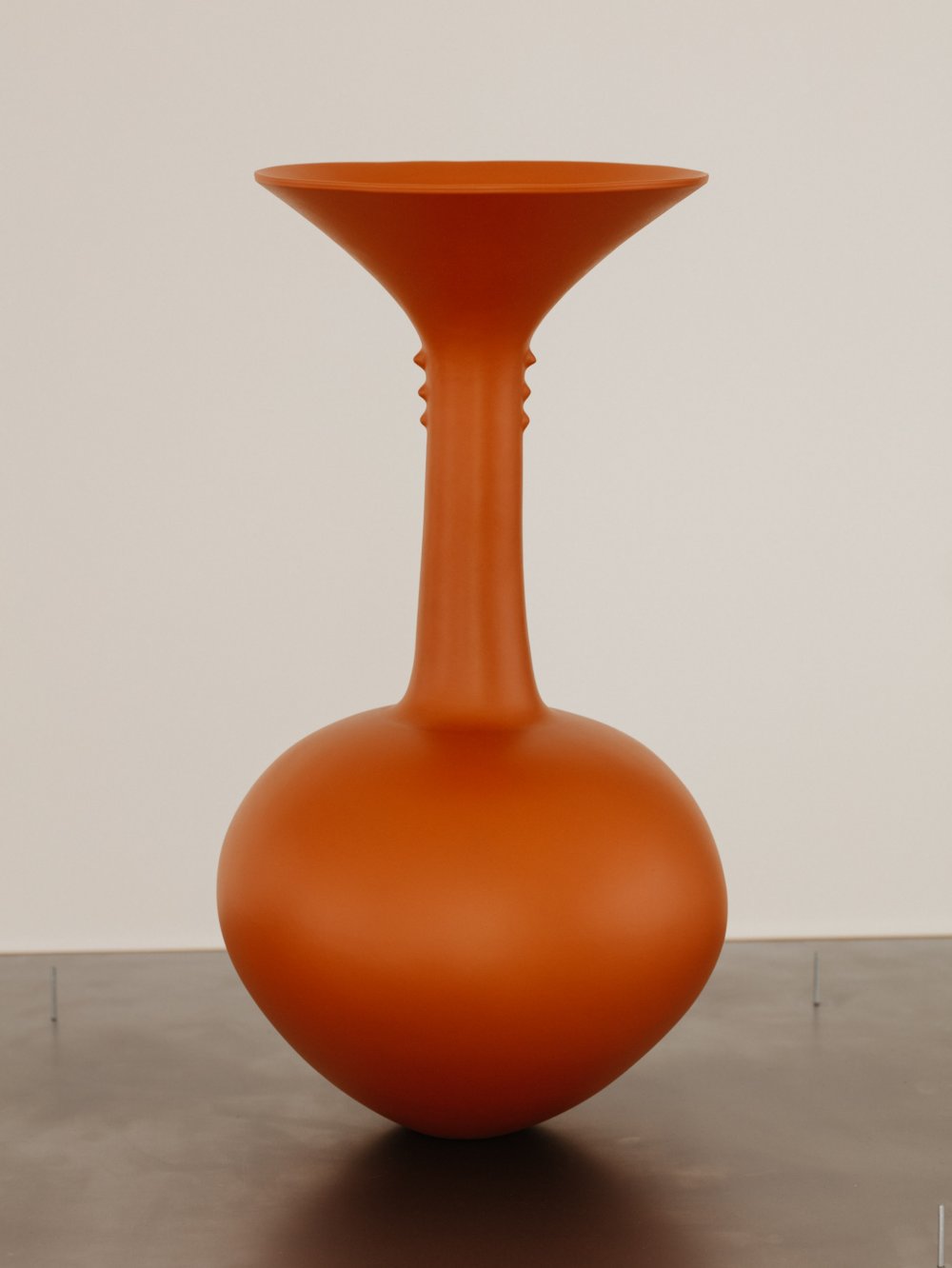 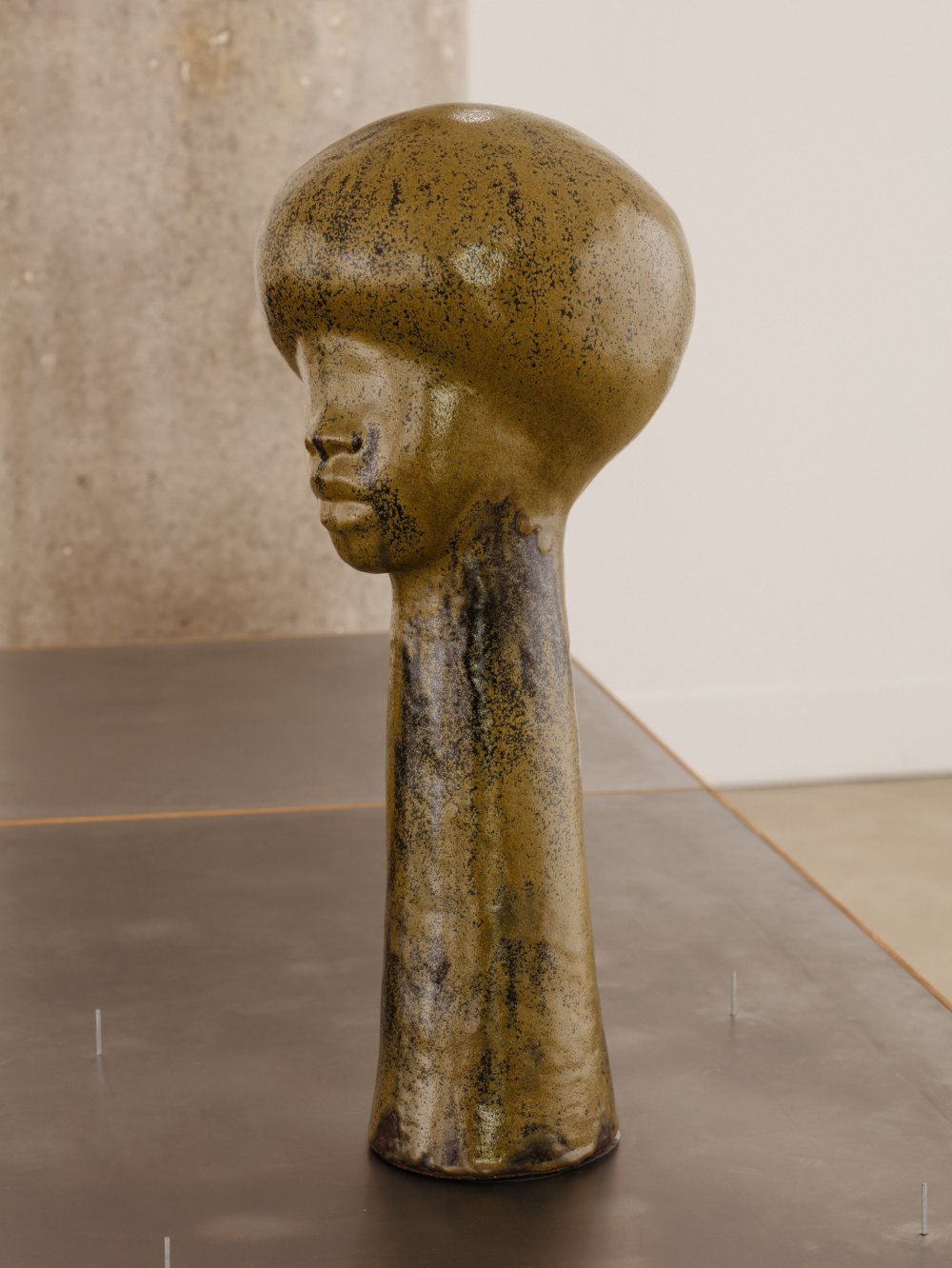 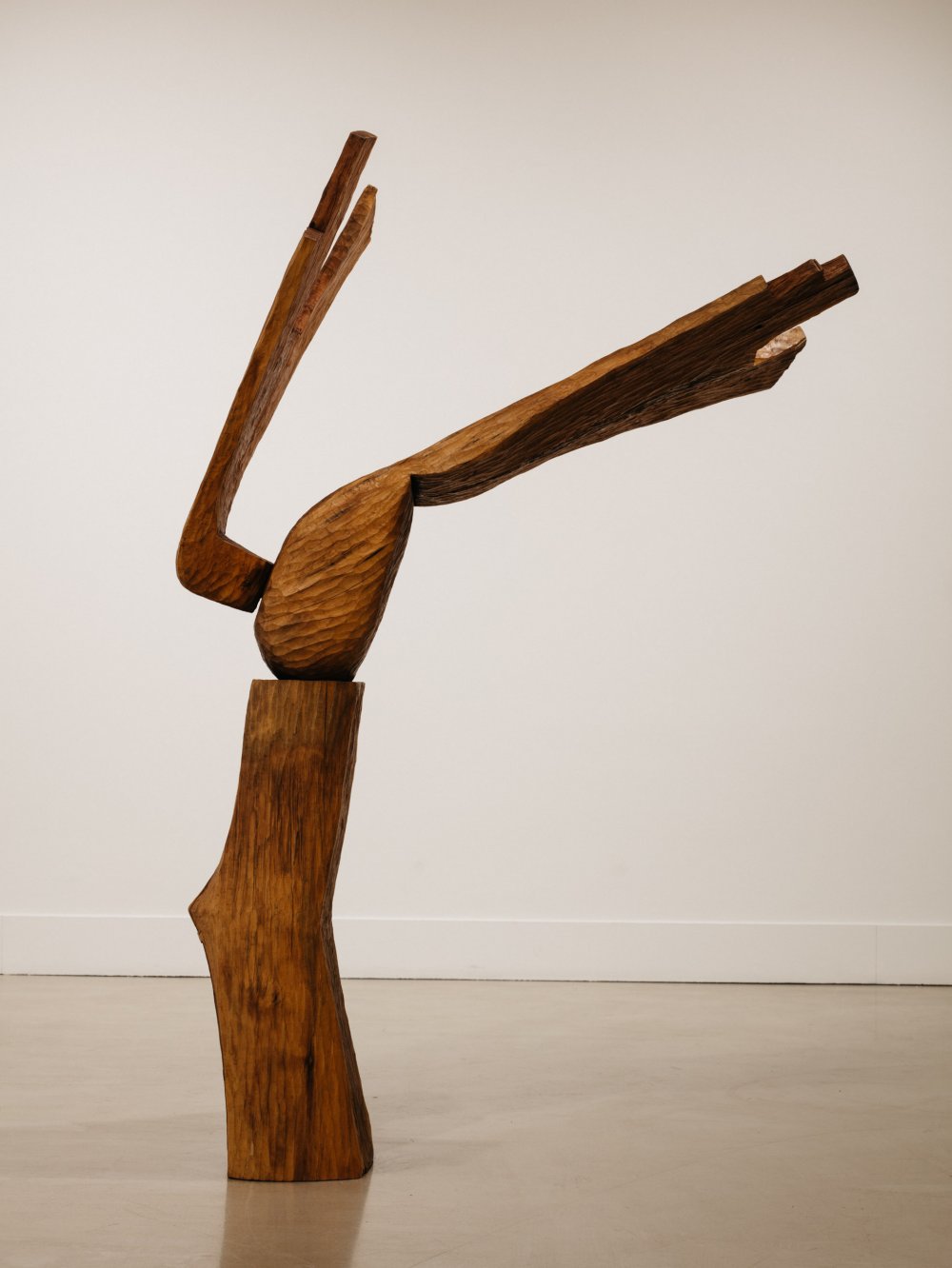 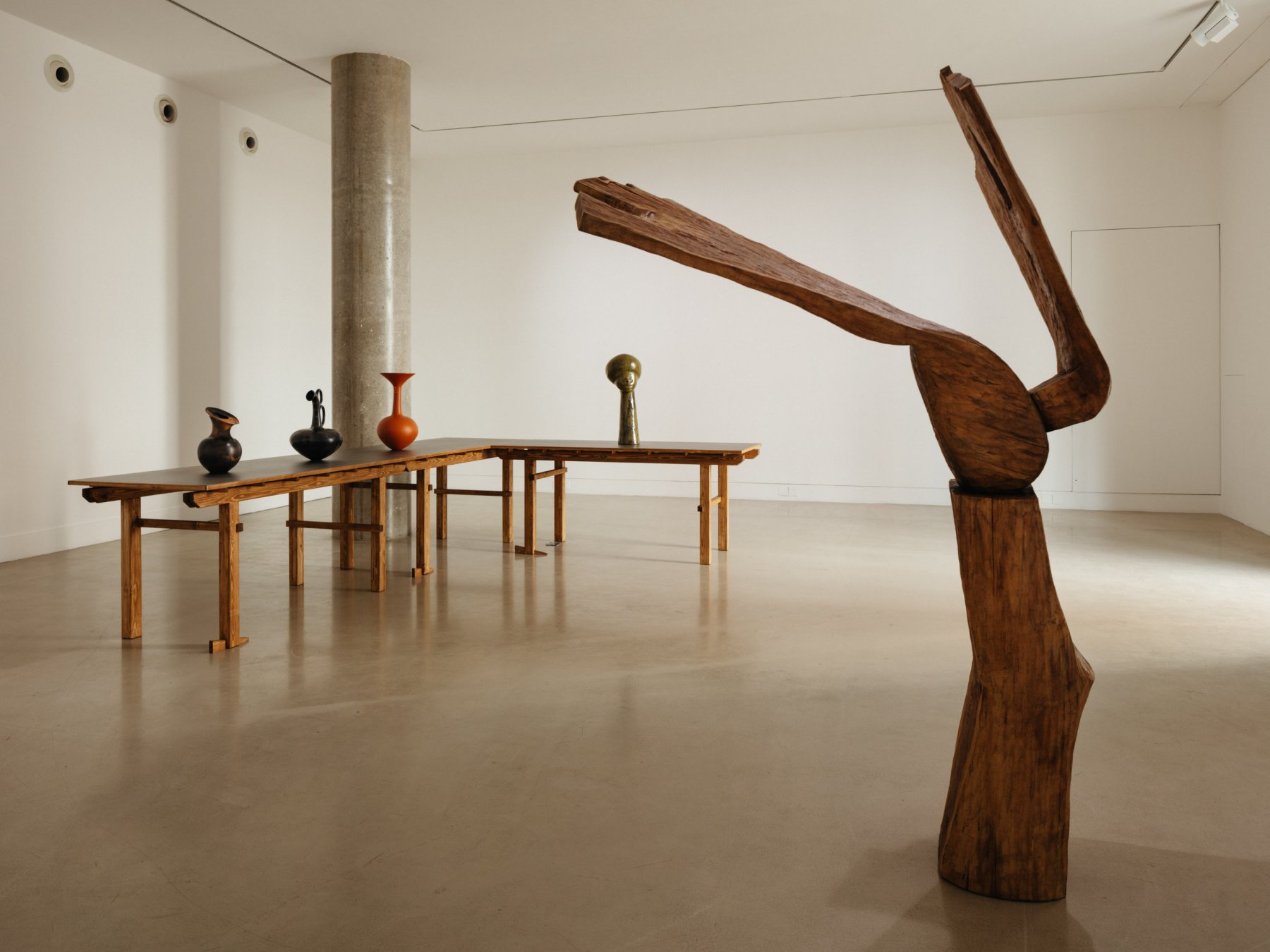 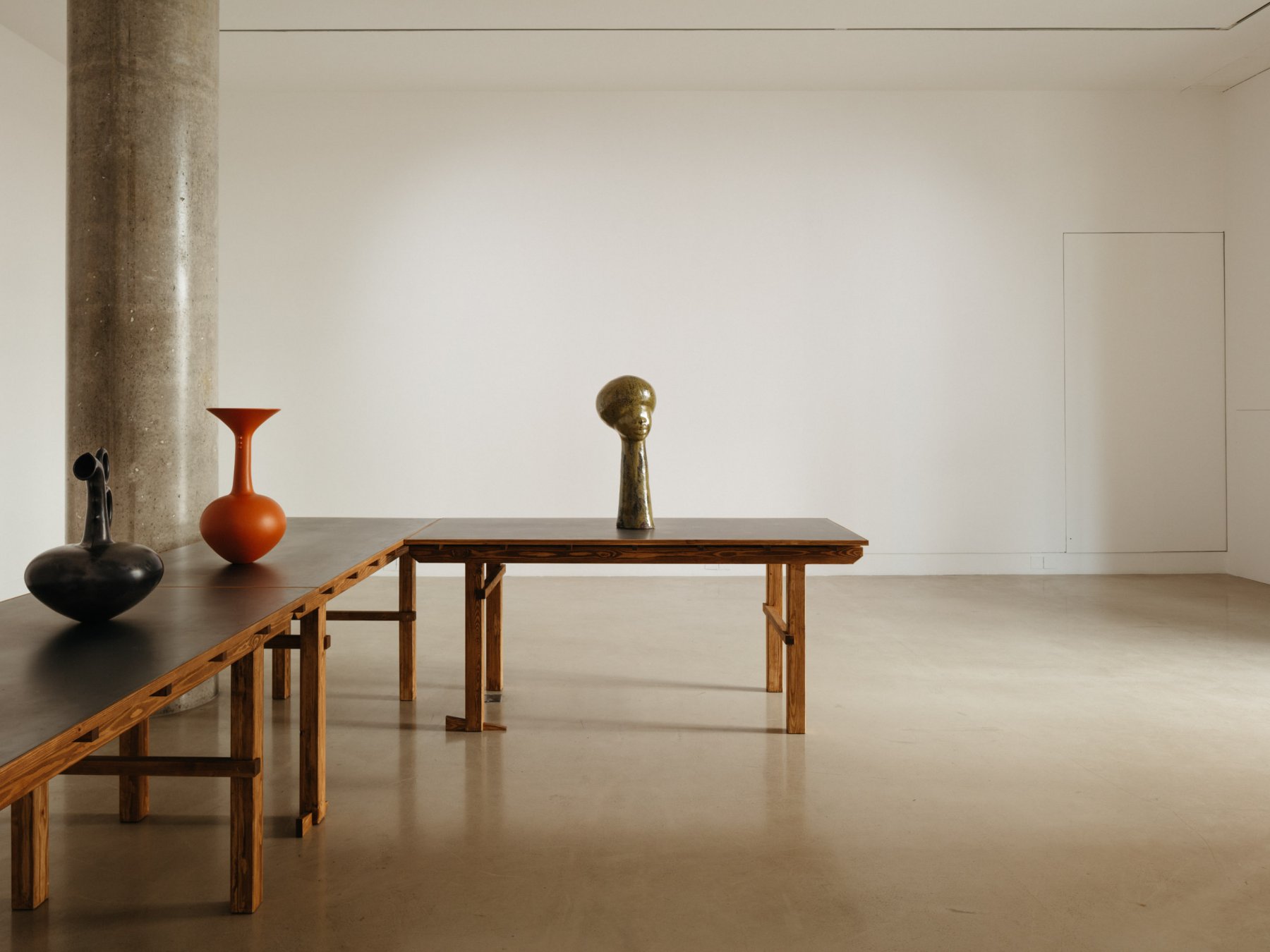 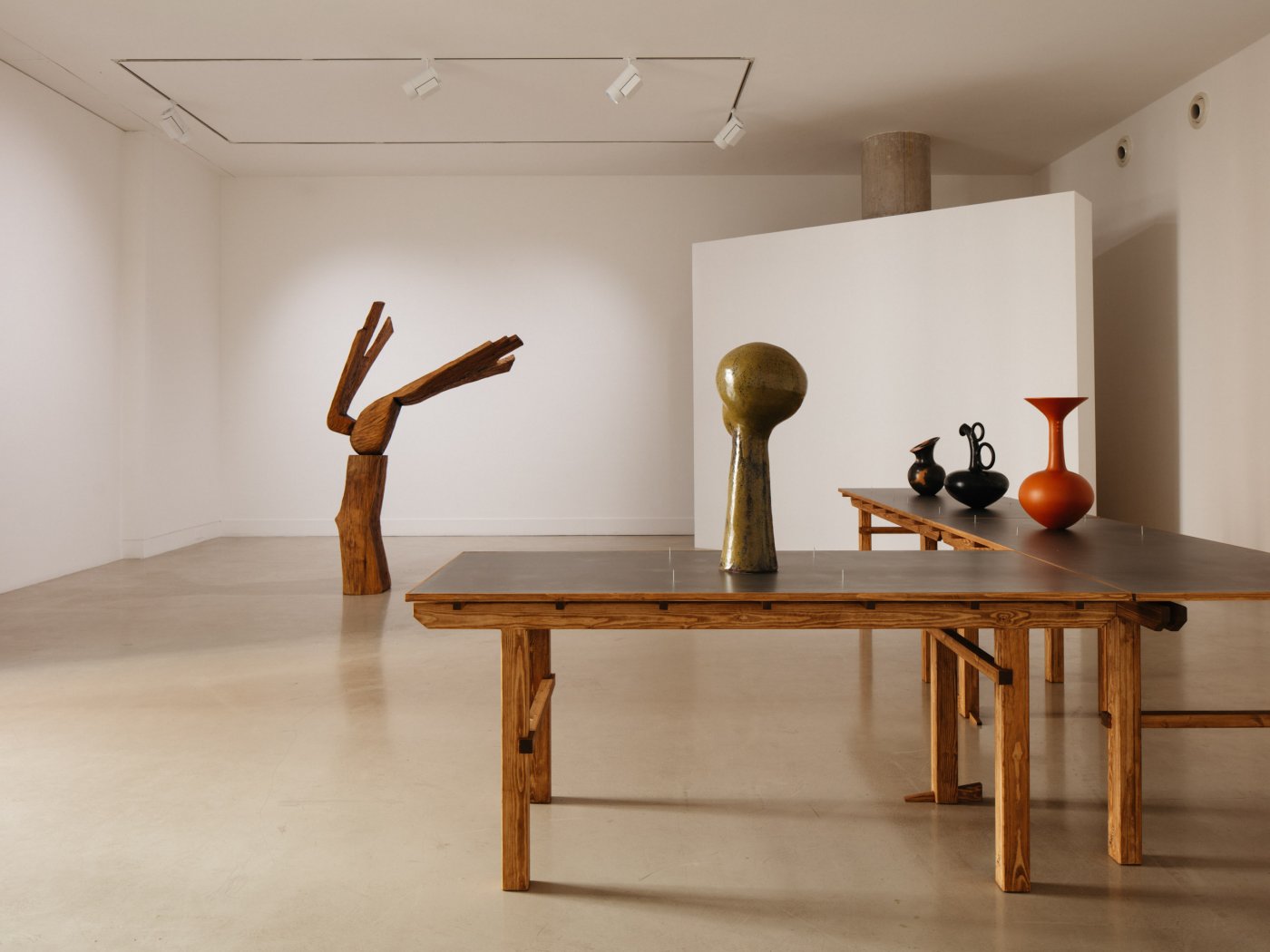 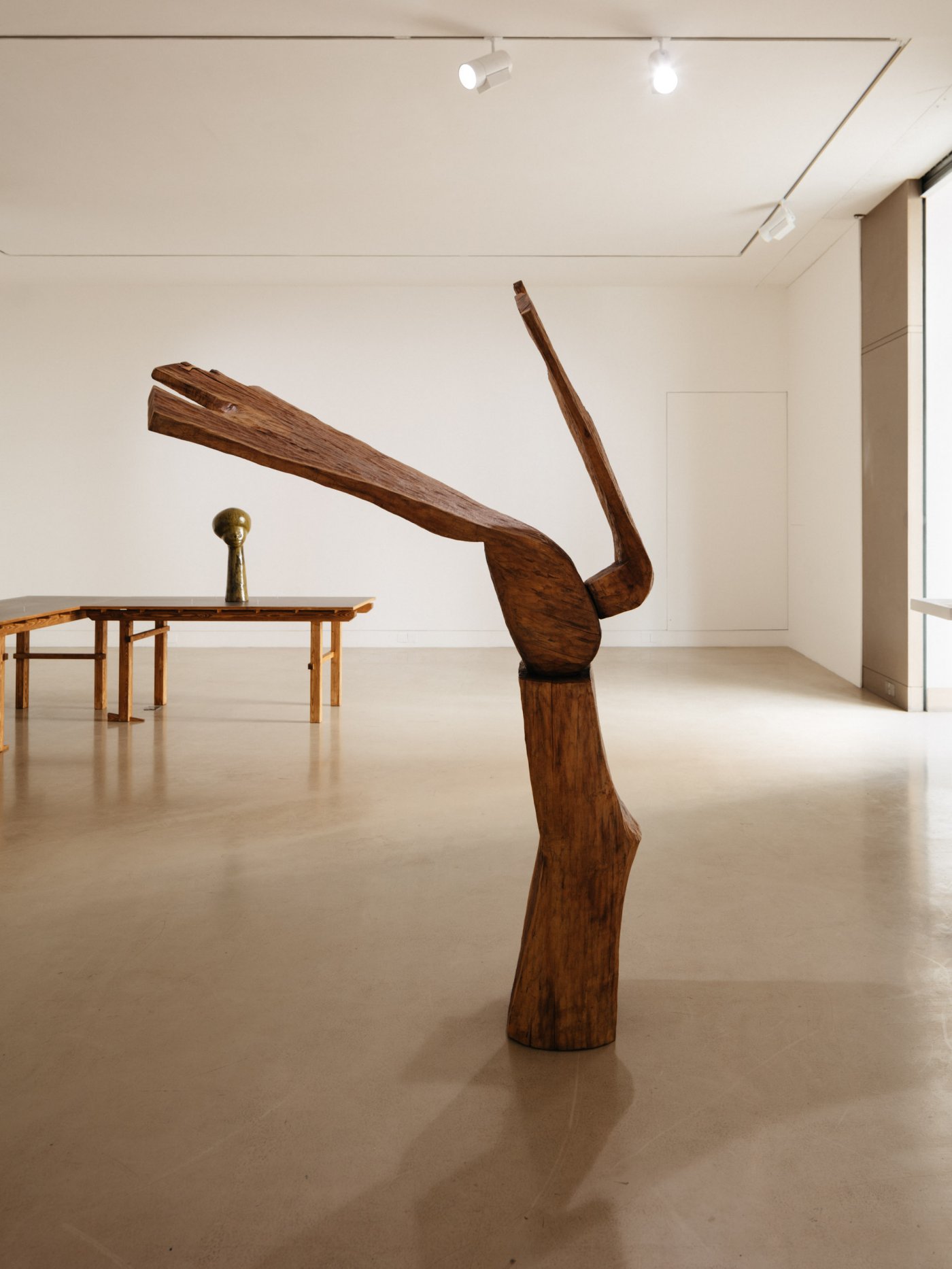 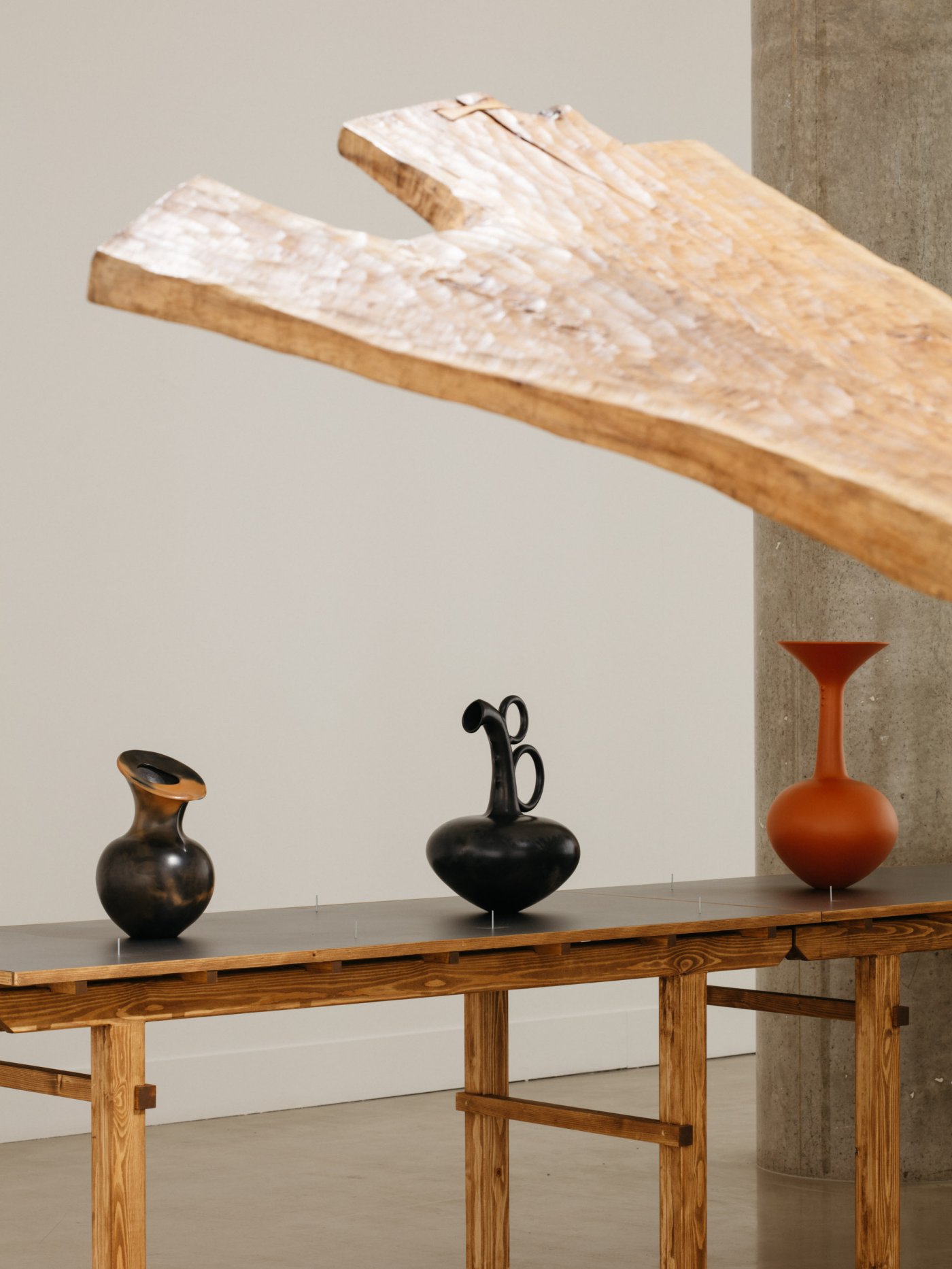 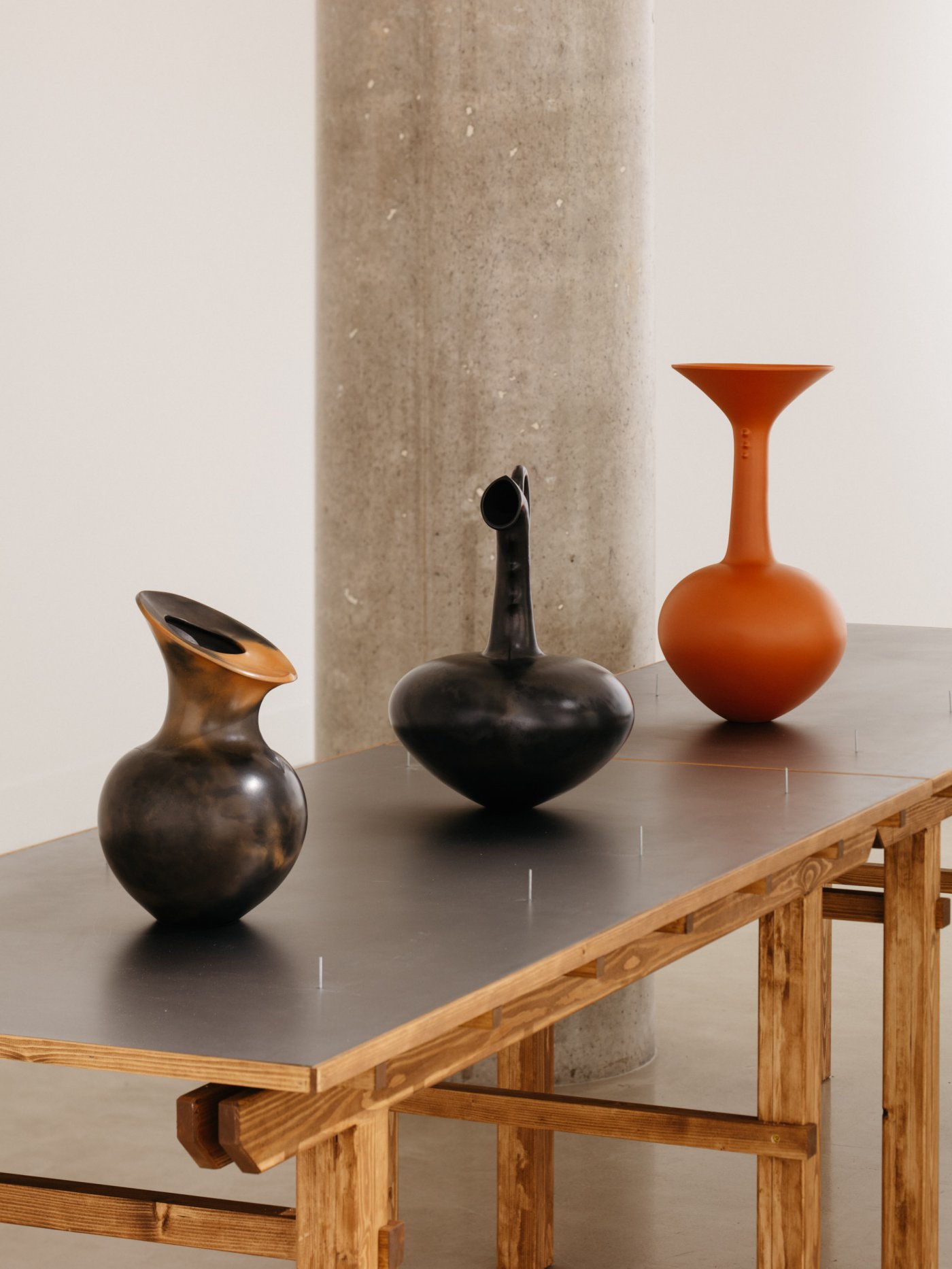 While, like earlier Modernist artists, they engage with the formal elements of vernacular and functional objects from the African continent and diaspora, they reject the condescending ethnographic approach which has tarred the history of African influence on Western art. Instead of decontextualizing their sources, these artists explore and uncover the significance of them, a process which incorporates multiple levels of meaning into their work.

Magdalene Odundo may have started her career with a traditional British studio potter education but has since gone on to assimilate and refine techniques gleaned from her travels, distilling this knowledge into a distinctive approach to her medium. Odundo’s sleek rounded vessels might register as purely abstract were it not for the relationship they conjure between the jug and the body of the woman who balances it.

The shape of the water jug is also present in Simone Leigh’s corporeal vessels. Her anthropomorphic forms occupy a space between figuration and abstraction which reflects the relationship between the pot and its maker. Her bulbous, bottle-like sculptures can be read in association with the face jug pottery made by nineteenth-century enslaved African Americans in the American South – perhaps the best known being potter and poet David Drake or ‘Dave the Potter’ – which were believed to have sacred value. Leigh’s vast array of references and research creates an expansive practice which brings the echoes of the past into the present.

Thaddeus Mosley animates his weighty materials – great pieces of walnut, cherry and sycamore – into dynamic sculptures. His forms are equally inspired by the thriving jazz scene of his hometown of Pittsburgh, his encounters with the work of internationally renowned artists including Isamu Noguchi and Alberto Giacometti, his collection of art from across the African continent and his admiration of vernacular objects such as the wooden grave markers of Sunbury, Georgia. Like Odundo and Leigh, Mosley is able to create a new sculptural language from seemingly disparate influences.

The works of these three artists expose the overlapping nature of objects traditionally kept apart. Whether labelled as artifact or high art, these three artists appraise all objects in search of artistry, refinement and history, from which they can take inspiration in their own pursuit of form and meaning. Through their abstracted figures, these artists propose what a more fully global history of form might look like.