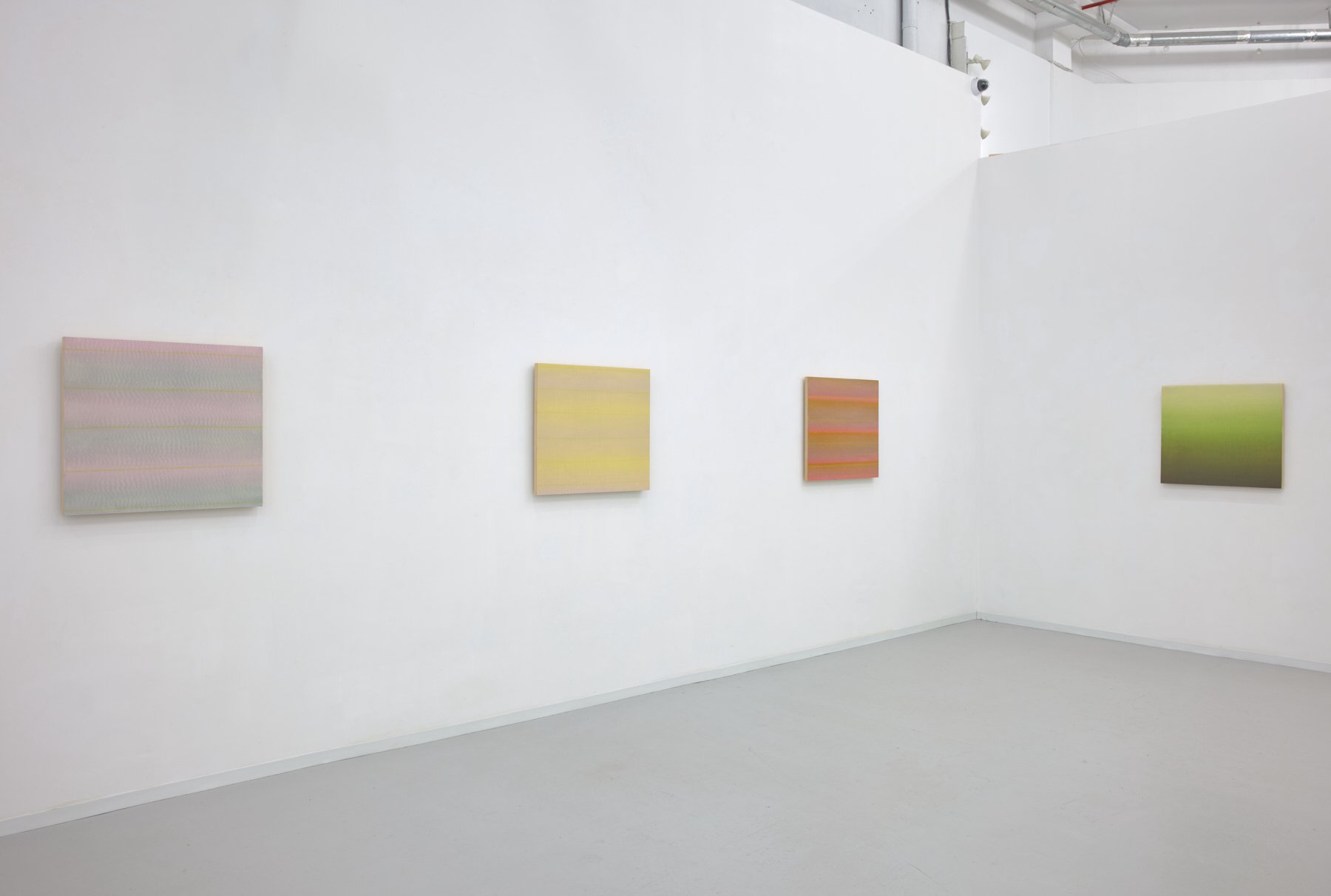 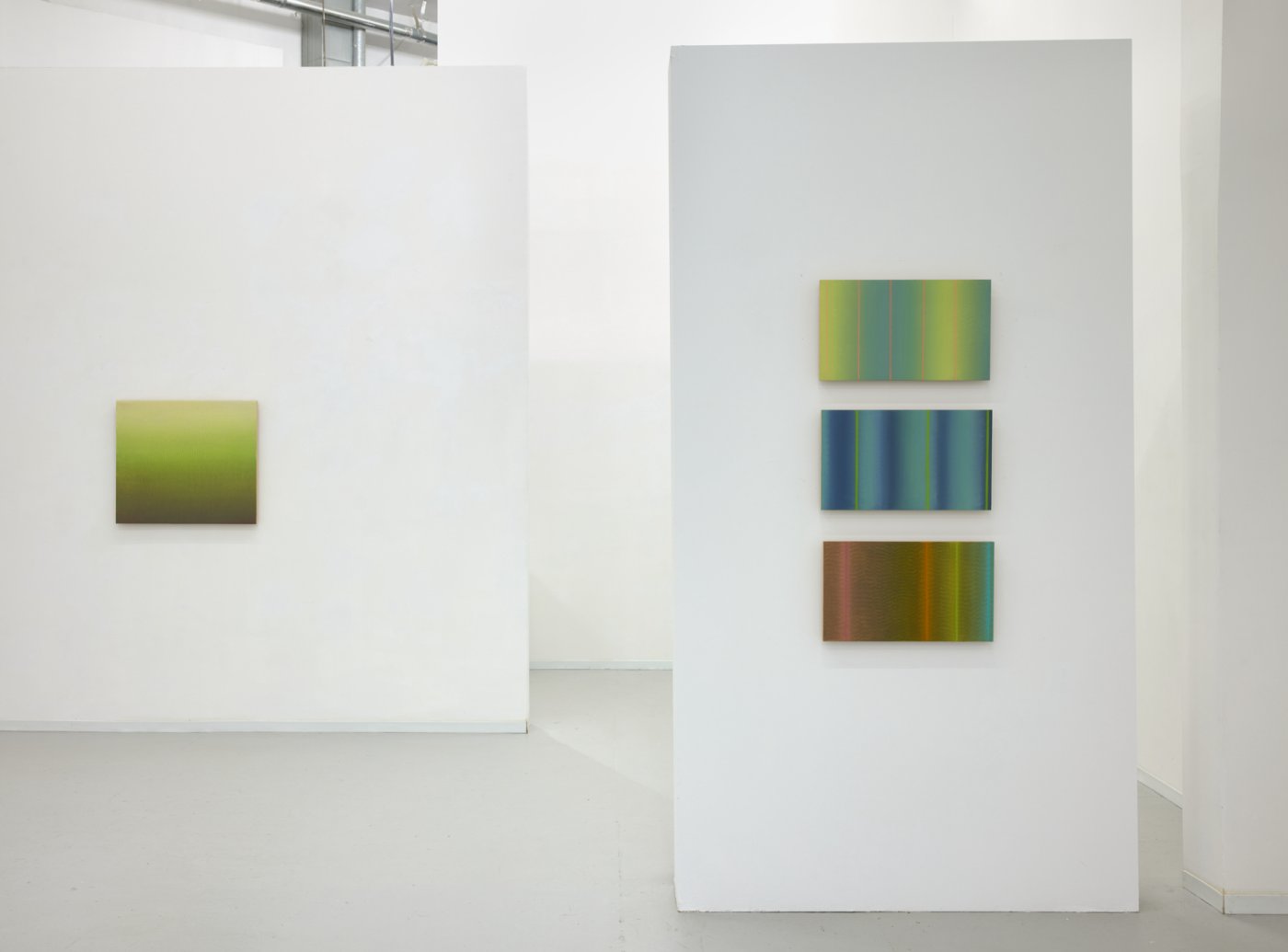 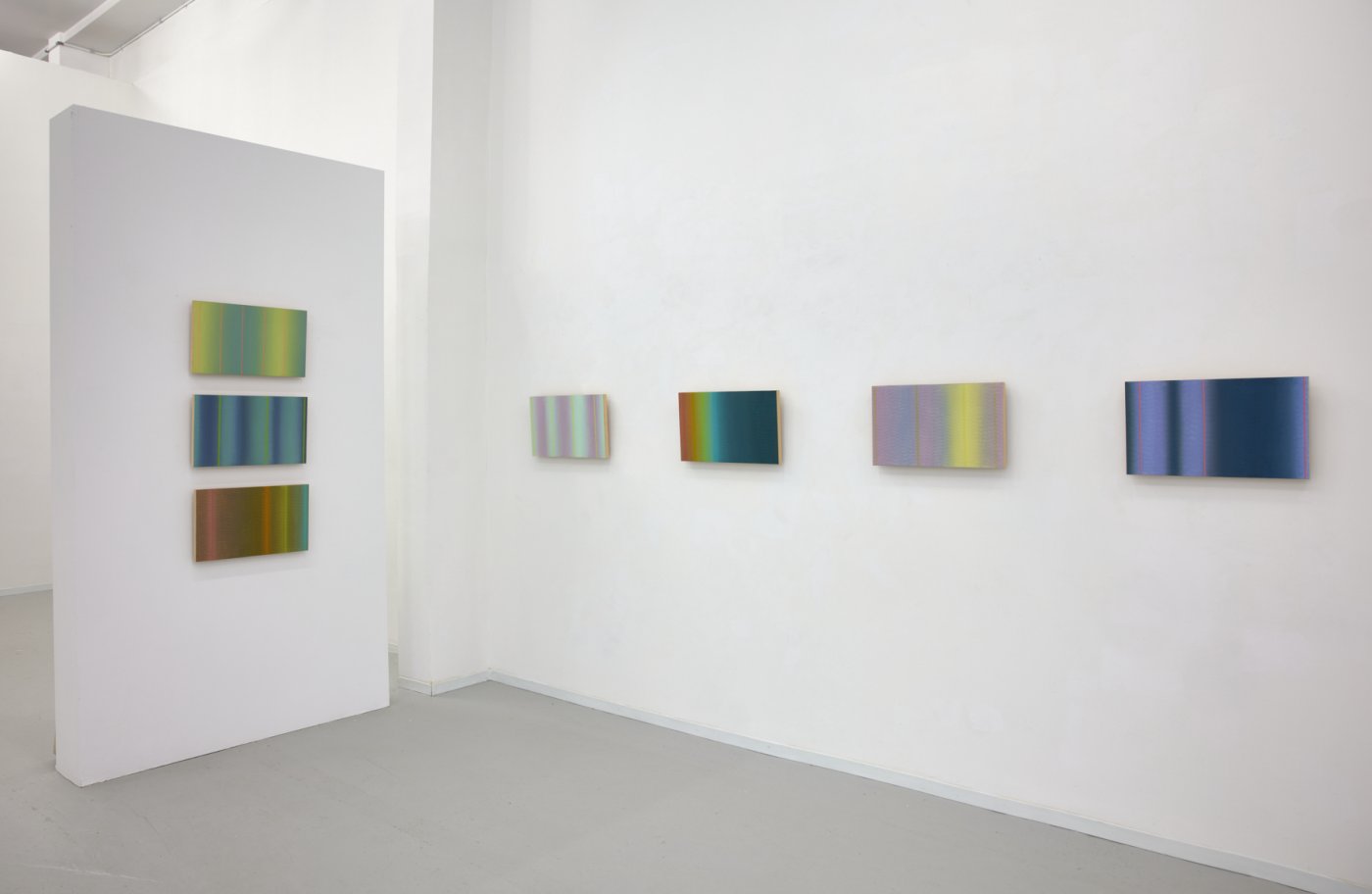 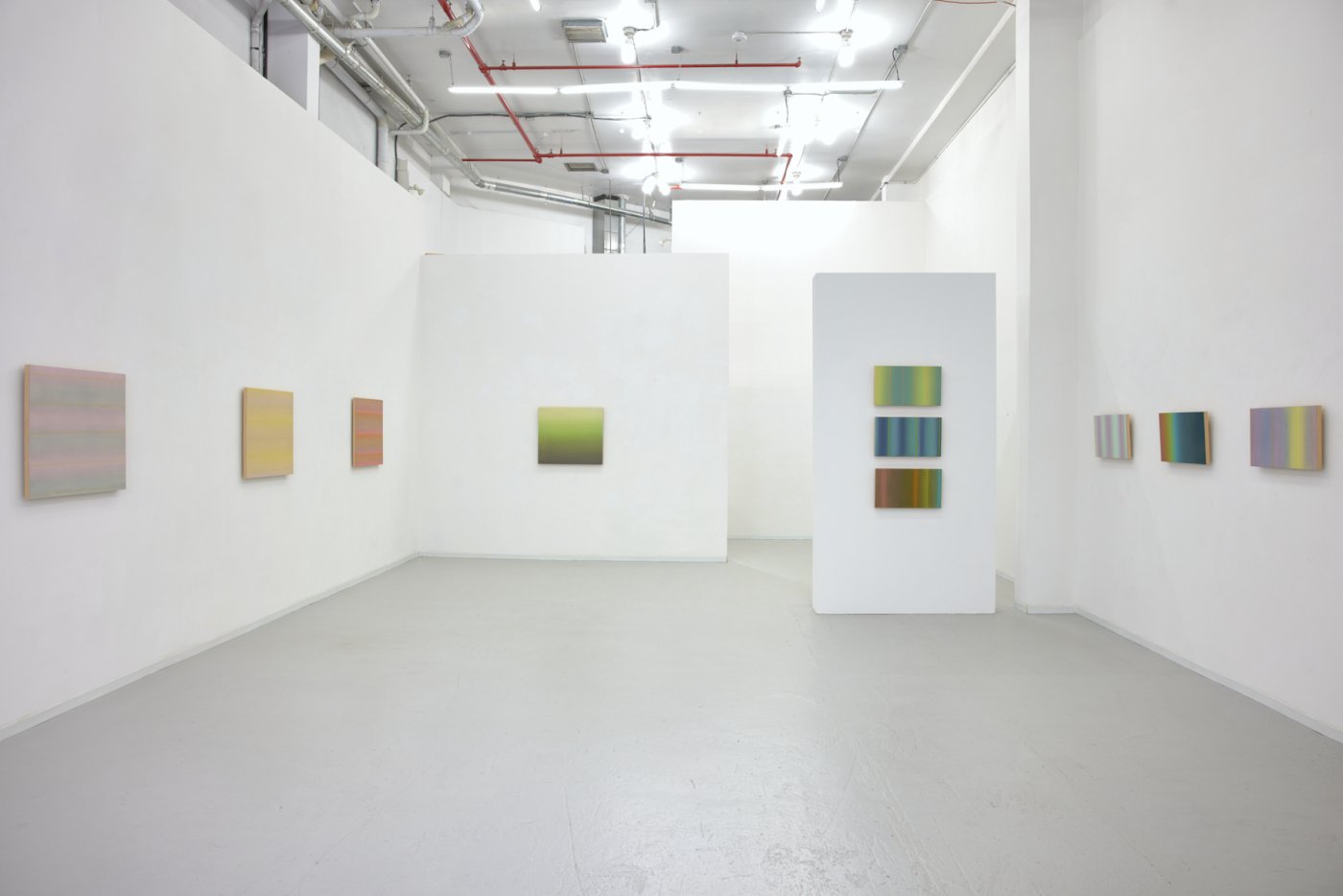 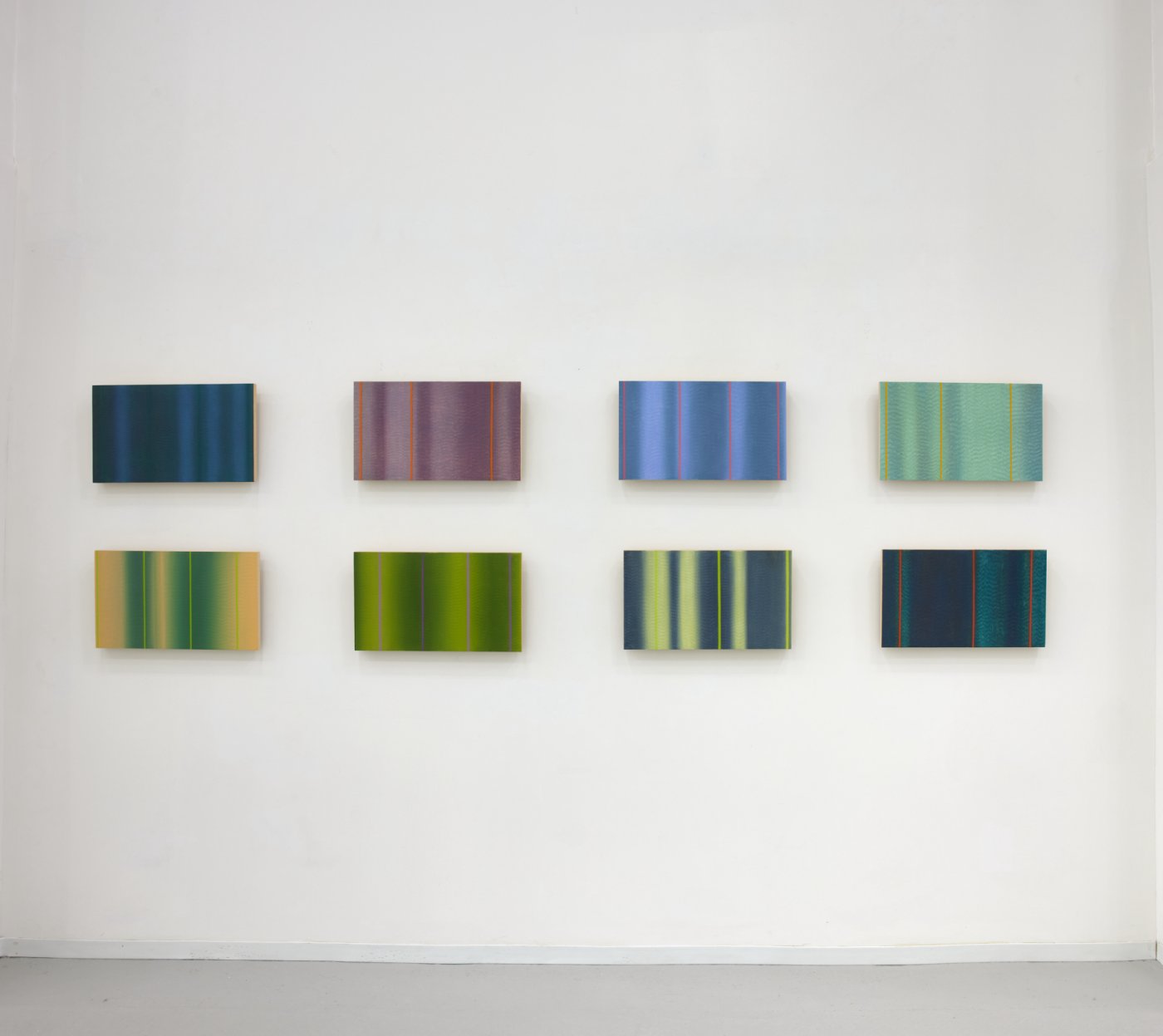 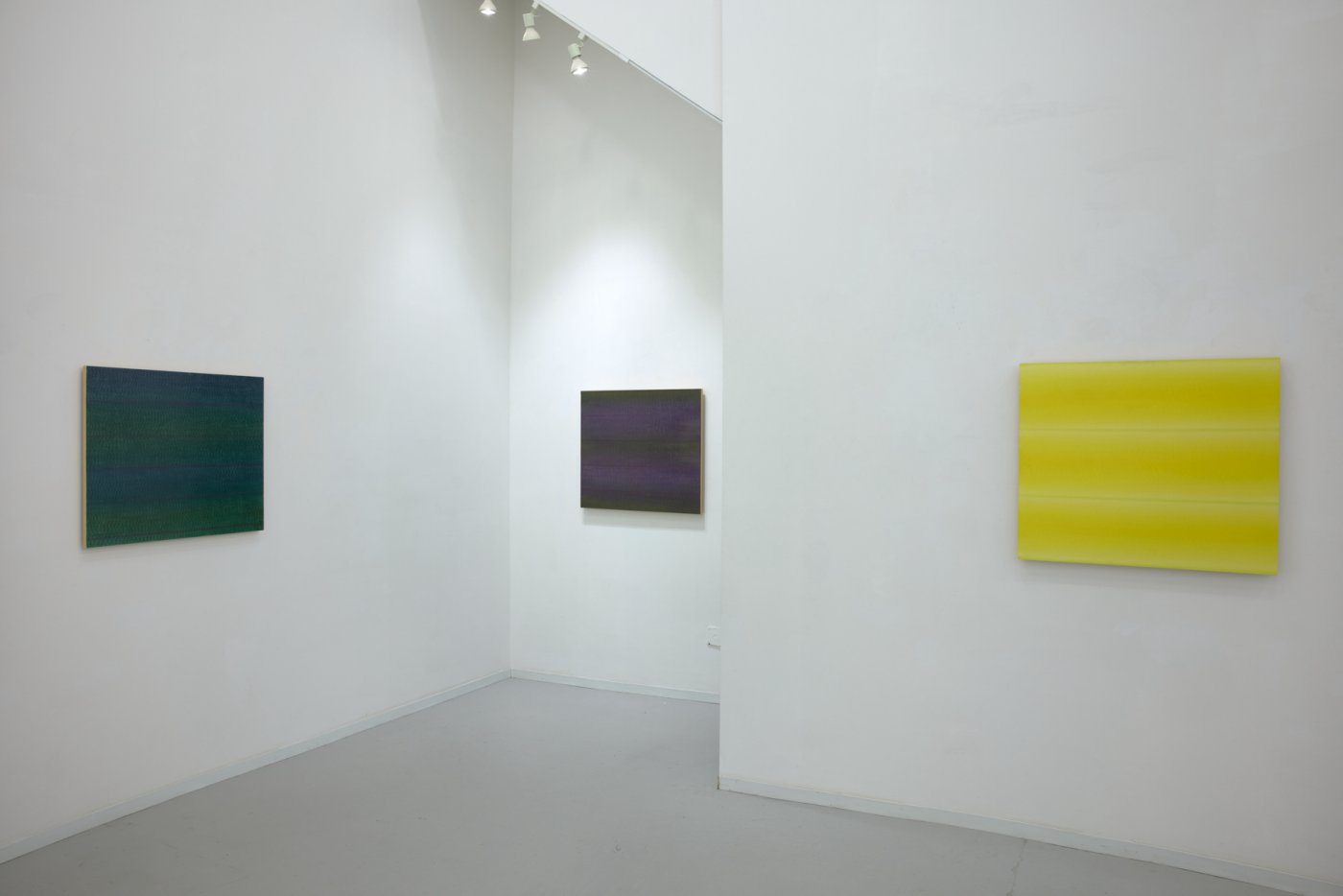 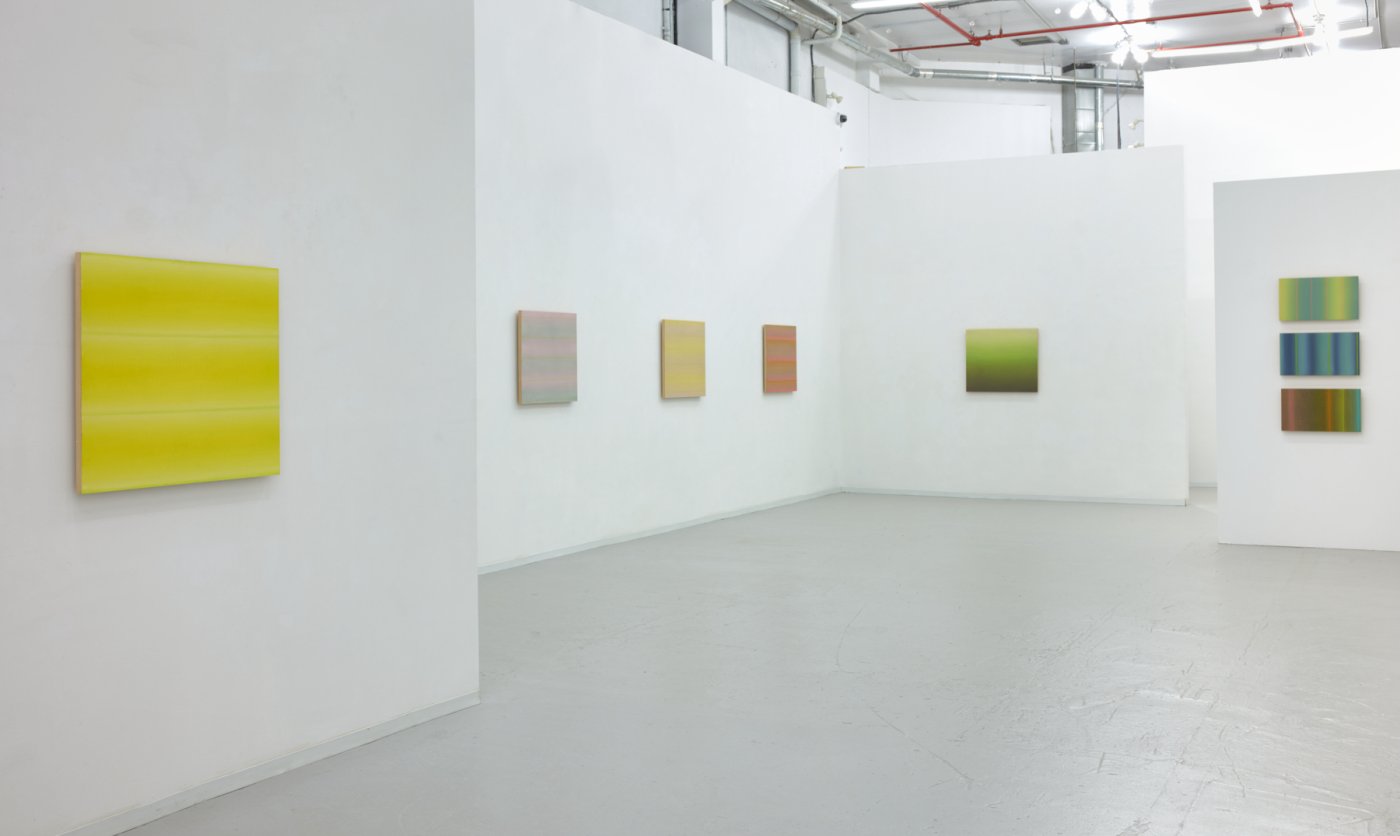 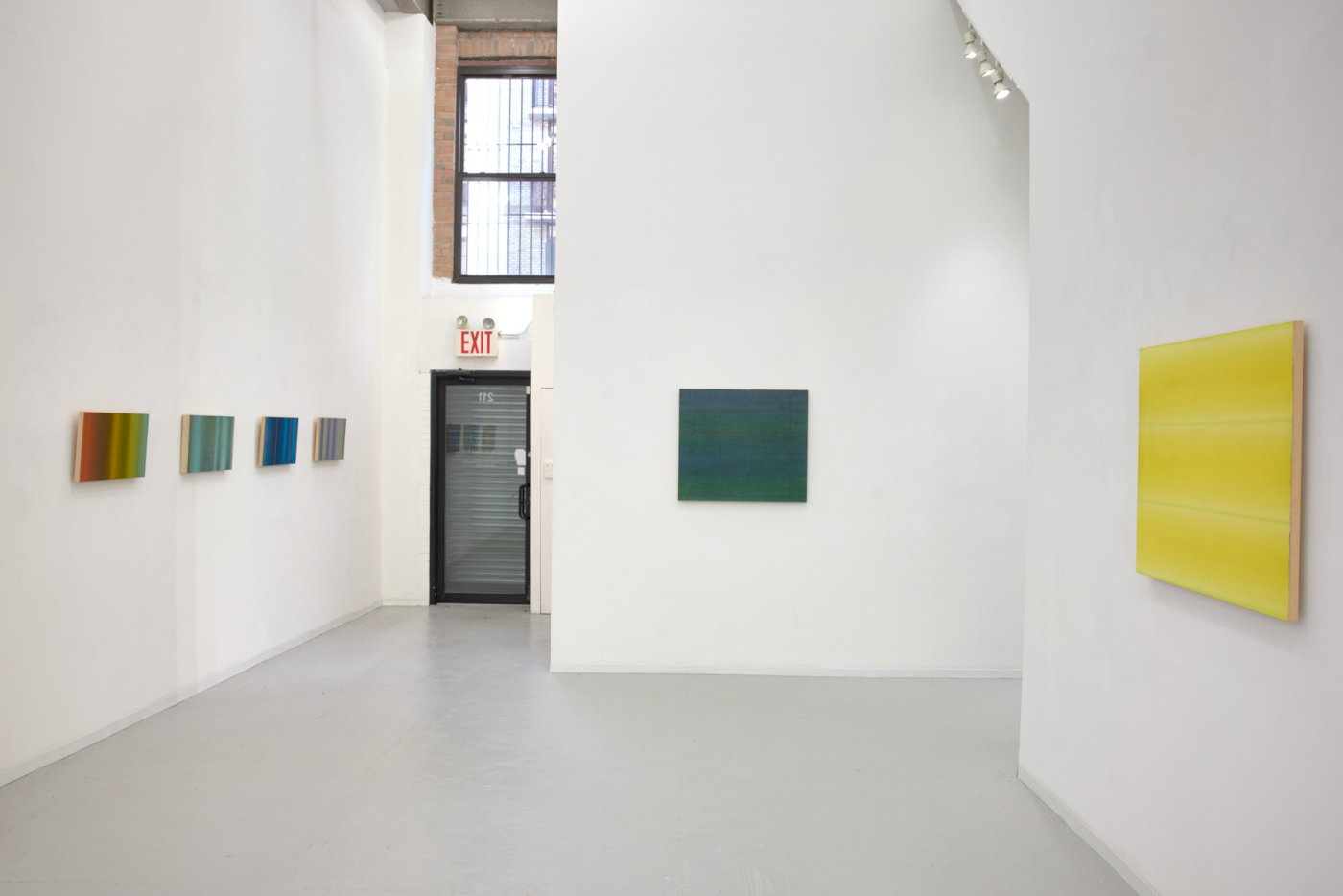 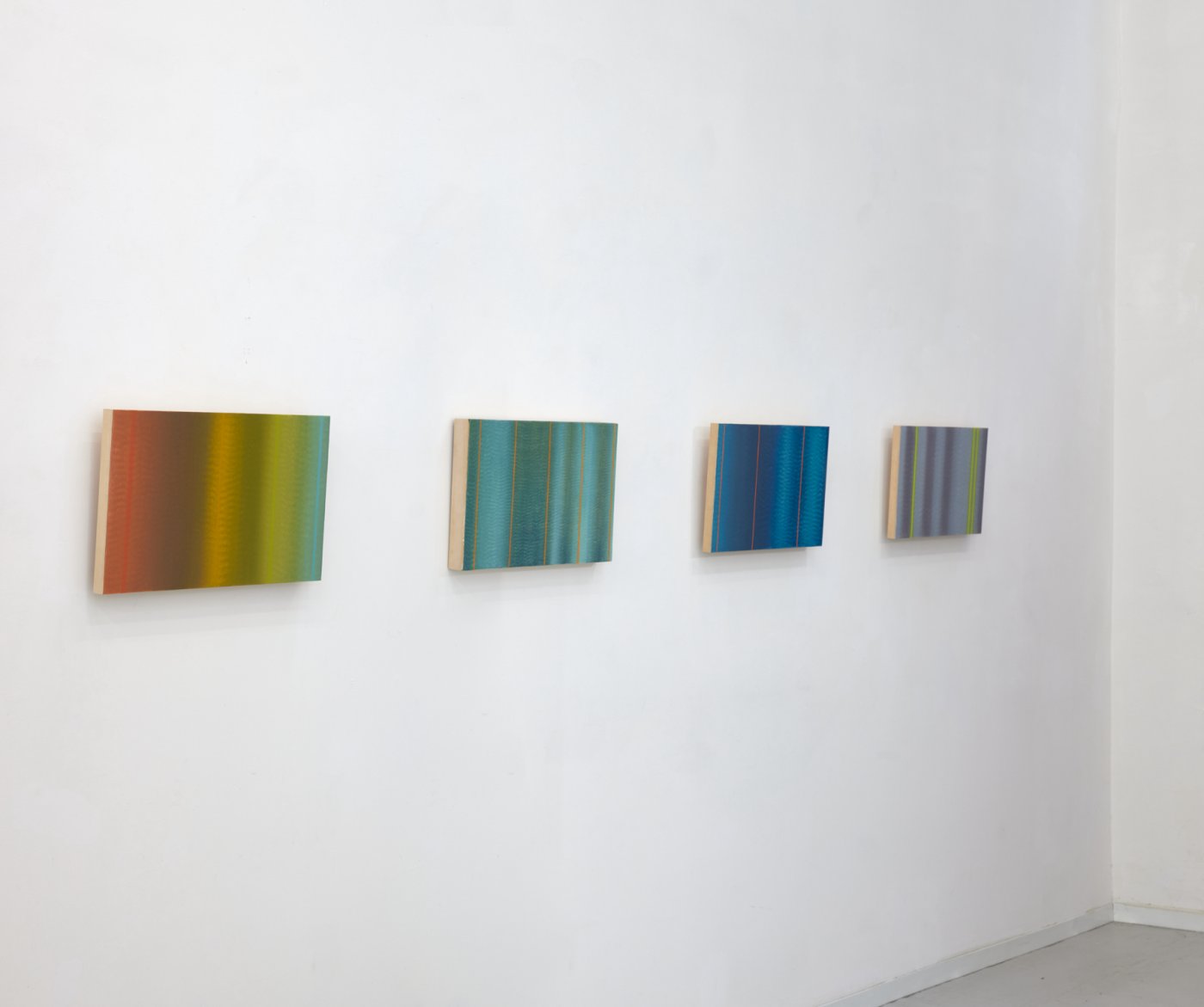 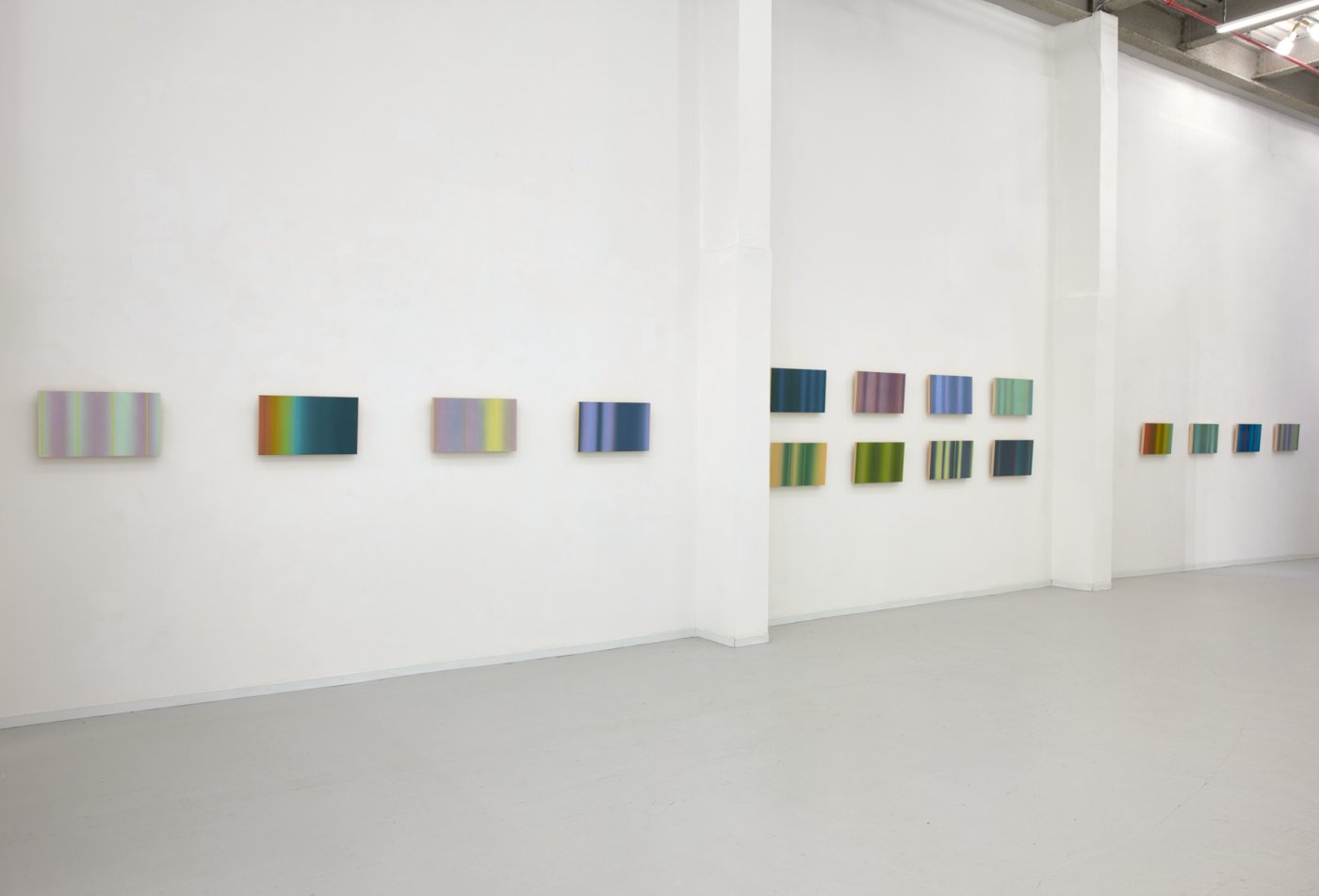 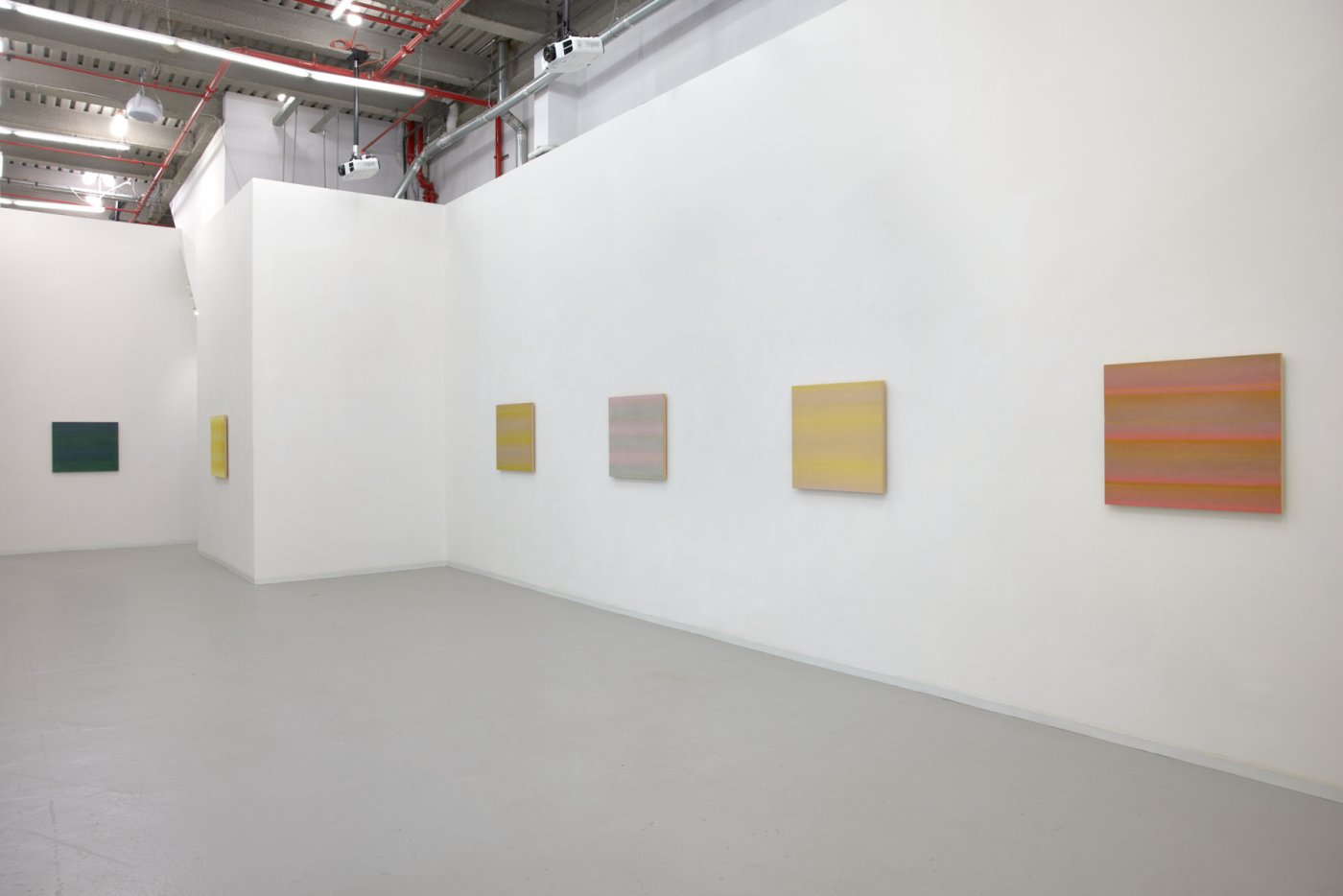 Kozak’s paintings are rooted in color, specifically the interaction between reflected color and the surface of water. The surface of water is dynamic and ever changing, especially along the bank of the Hudson River near Hudson, New York, where the artist’s studio has been located for 25 years. Perceptions of color, color interactions and spatial depth change, responding to surface conditions, moonlight, sunlight, and the spreading illumination from the nighttime river traffic. The incidence of those light sources throughout the day and night, the spectrum and quality of seasonal light, the effects of wind, and activity from commercial vessels are fundamental influences and components in Kozak’s paintings. The passage of barges, tugs and tankers is particularly stunning at night, when the reflected lights from these vessels illuminate the river. The drama of these nocturnal scenes has inspired Kozak to begin a series of night paintings on which she has been working on since the beginning of the pandemic.

While the river is her subject and a source for the palette of each painting, color itself becomes the means for abstraction. Kozak captures the energy and sensation of the river through her use of its reflective surface to assimilate the physical and optical behaviors of water and light. Her wide strokes of paint move across the painting’s surface replicating the flow and movement of her subject. Kozak introduces linear elements to express other empirical observations, including natural phenomena on the river’s surface such as glitter, glare and the visual phenomena of after-image. Kozak’s practice of painting onsite has translated into a deep concern and activism for protecting the Hudson; such vigilance led to the exhibition title.

The larger paintings, in a ratio of 7/8 noted above, are from the same source, the Hudson River alongside the artist’s studio. These are mostly begun in the early morning and often continue late into the day. While Kozak paints onsite these are not plein air paintings. Spanning from 2017 through 2020, these compositions also differ from the night paintings in that they are nearly square.

Water is illusory in and of itself, it is in constant motion. Its surface is equally illusory, depending upon natural and manmade phenomena; it can be still or turbulent, fast-moving or slow, transparent or turbid, smooth or textured. Kozak depicts no horizons in her work. All the color in Kozak’s paintings is derived solely through indirect observation, using the river’s surface as mirror or lens. Yet, these abstract works maintain the essence of their empirical origin.

The Artist’s Statement: I grew up near water, learning to swim at an early age in the nearby Long Island Sound and on family vacations in Maine. Water is the source of life—it goes where it wants— at its own speed, in varied states, marking time, in an indifferent universe. It is the element that has always made the most sense to me.

In 1994 I began to paint on a field easel beside bodies of water. My studio sits on the shoreline of the Hudson River in Greene County. Prior to painting I worked in video during the mid 70s through mid 80s. During these decades video was an analog medium, the video signal traveling in a fluid stream of electrons. Fluidity is a shared property of both paint and video, the materials, and methods with which I work. This commonality creates a sympathetic relationship and an ongoing dialog between the concepts and inherent craft in each medium. Recently I’ve noticed an inverse relationship between my paintings and video; while my paintings collapse hours of observation into ostensibly still surfaces, my video pieces are typically composed from still images of the same subject, water, which by nature is in constant motion.

Bodies of water are my subject, but I also depend upon their surfaces to perform a functional role, acting as an intermediary for indirectly observing the world above. Like a lens, the surface of a river can assimilate reflection, color, and pattern. The surface collects activity from the sky above, the movements of clouds, fog, foliage, planes in flight, and on the Hudson, barges that transport crude oil and hazardous material. Water and oil paint share properties of viscosity. I explore paint as a mimetic medium—it has an honest relationship with my subject.

Reflections, like mirrors, show us a version of the visible world, but they can also impose ambiguity about where things are and where one stands in space. This recalls sensations that I felt as a child while swimming. Uncertainty can undermine one’s sense of knowing, and the water’s transparency can cause displacement, bestowing optical illusions. I use this disorientation to confound my point of view and to help me step out of my own way as an observer. Indirect observation can create collisions and magnify attributes by imposing distance, both perceptual and psychological. Mediated observation can suggest metaphor and render what is known equivocal.

Brief Bio: Ellen Kozak received her BFA from Massachusetts College of Art, Boston, Massachusetts and earned her MA in Visual Studies at from MIT, Center for Advanced Visual Studies, Cambridge, MA. She has had 21 solo exhibitions and numerous group presentations in New York, nationally and internationally including multiple exhibition in France, Japan and Cuba. Kozak has received review in the The New York Times, The New Yorker, Art In America, Art & Antiques, Hyperallergic, Two Coats of Paint, The Boston Globe and Boston Herald among others. Kozak was a Professor at Pratt Institute for more than 20 years and at Princeton University, The School of the Art Institute of Chicago at Oxbow, University of Massachusetts. Boston, and Art New England at Bennington College.

Kozak’s artworks are included in the permanent collection of the institutions: