Ellen Gallagher builds intricate, multi-layered works that pivot between the natural world, mythology and history. Her process involves undoing and reforming trains of thought often over long periods of time and across linked bodies of works. This exhibition presents new large-scale paintings and watercolour works on paper by the artist, including a continuation of her Watery Ecstatic works (2001—ongoing) and a recent series of paintings Ecstatic Draught of Fishes begun in 2019. 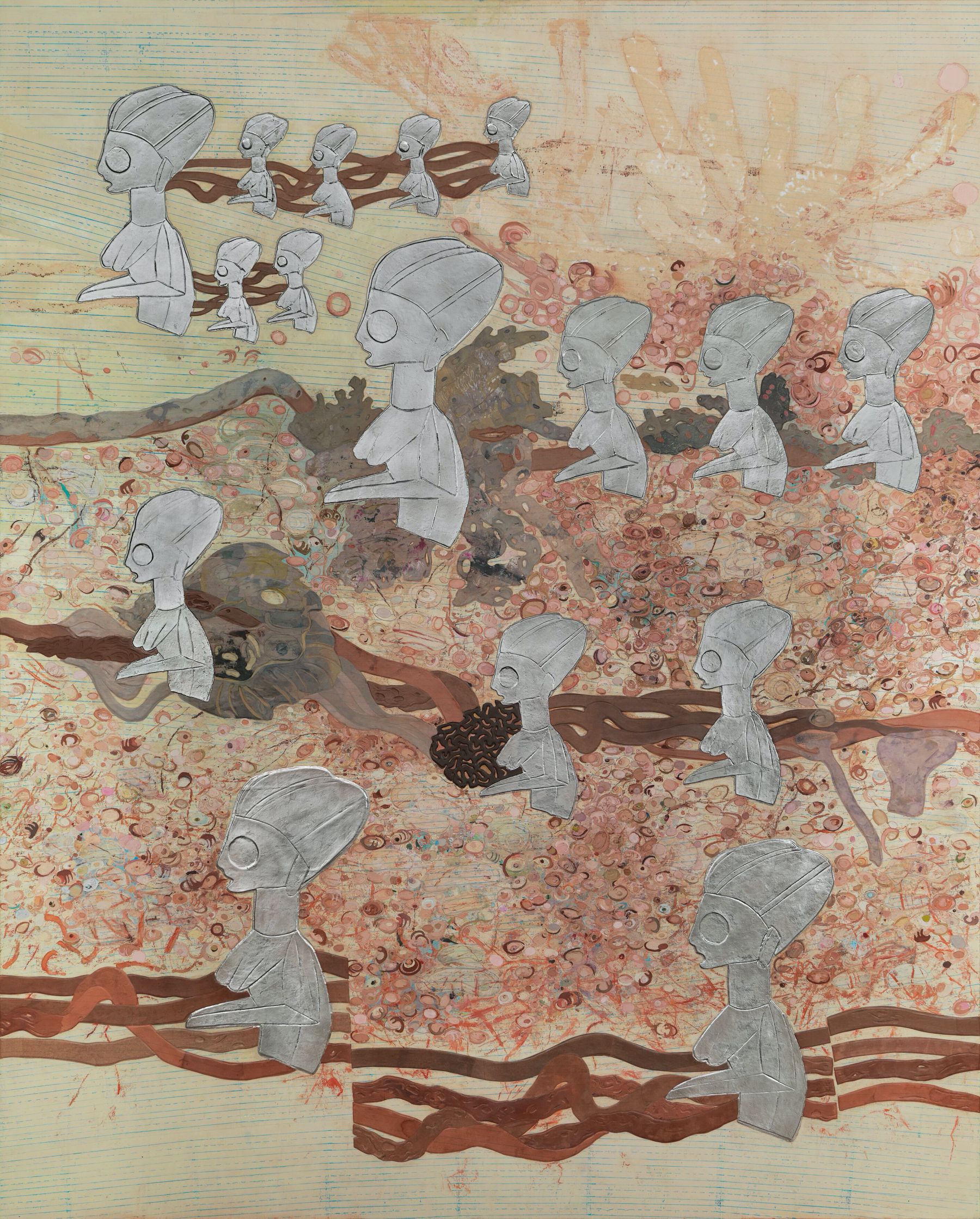 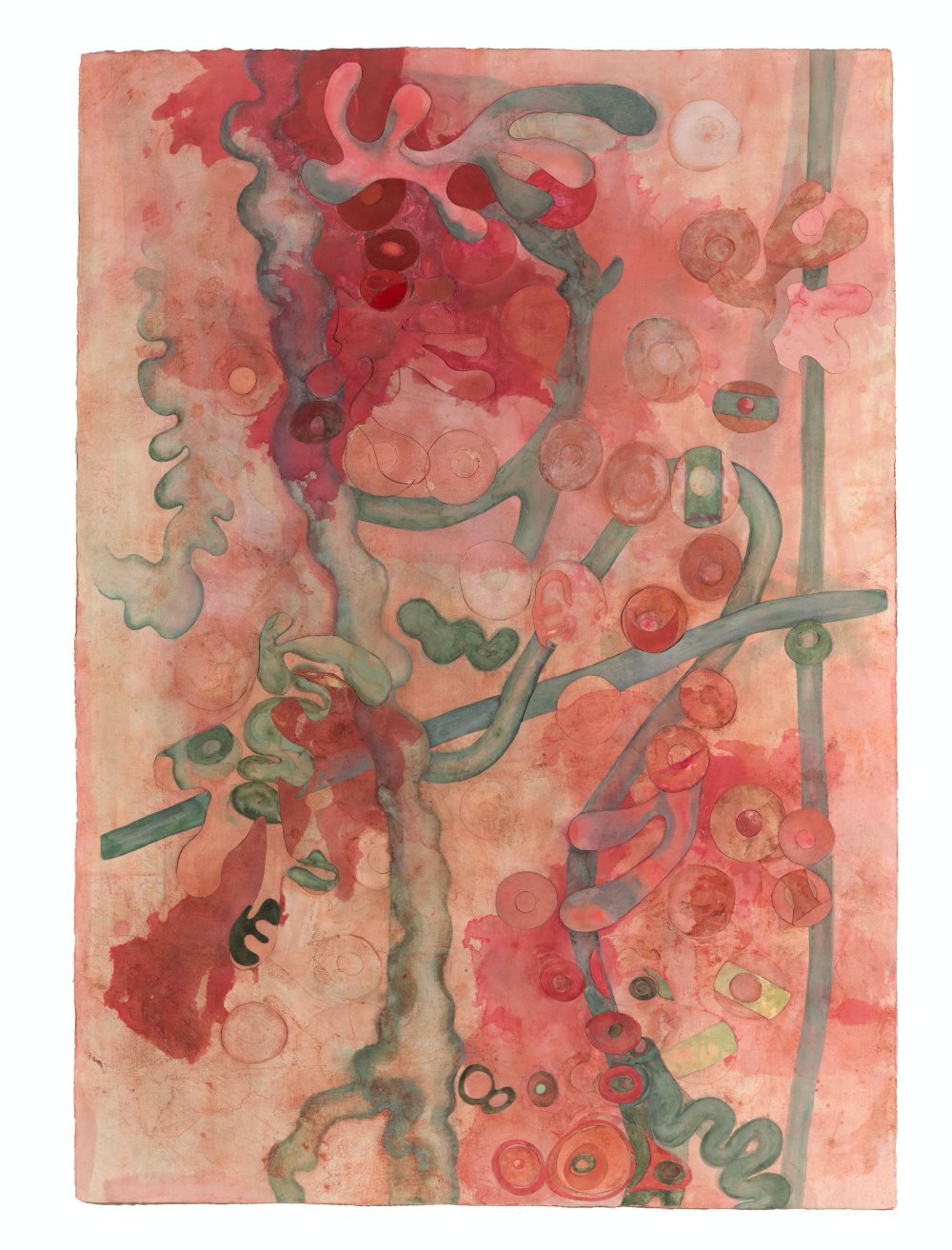 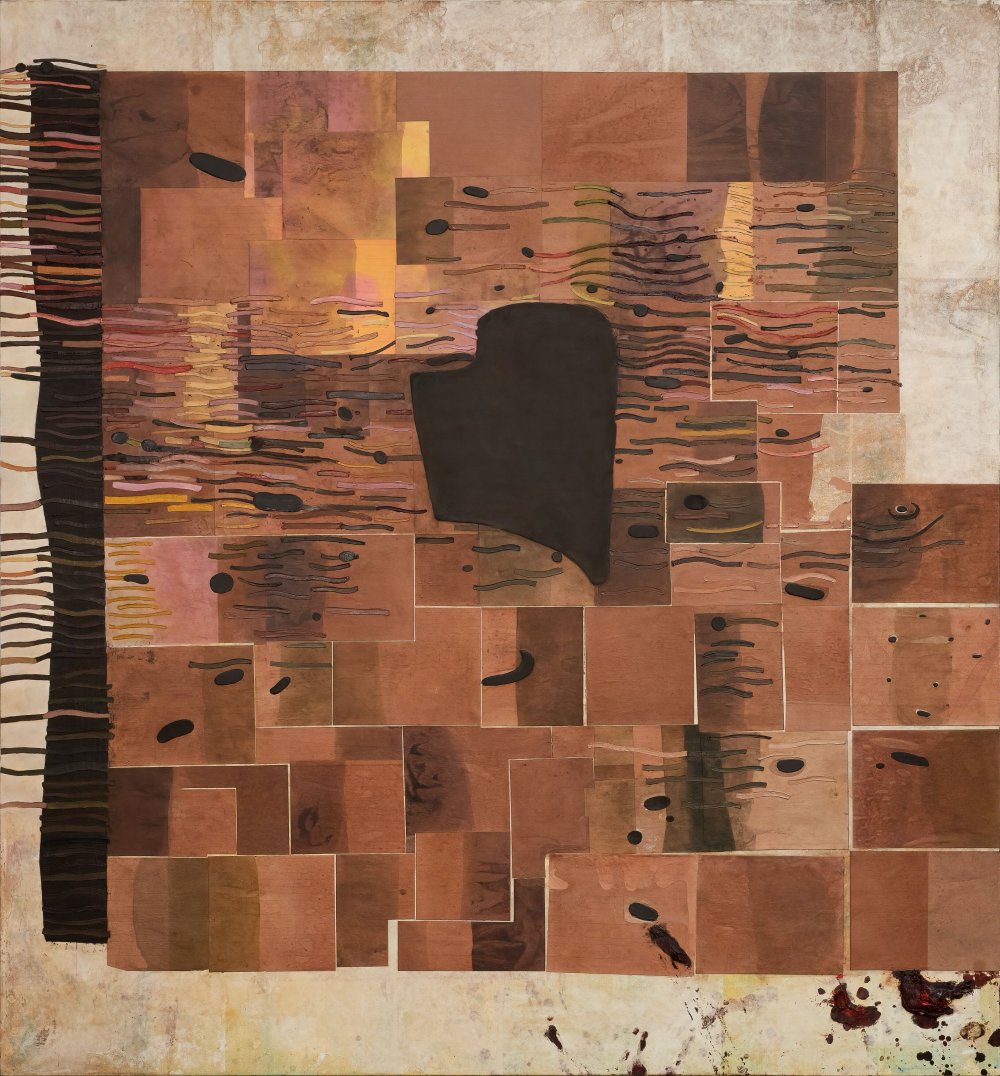 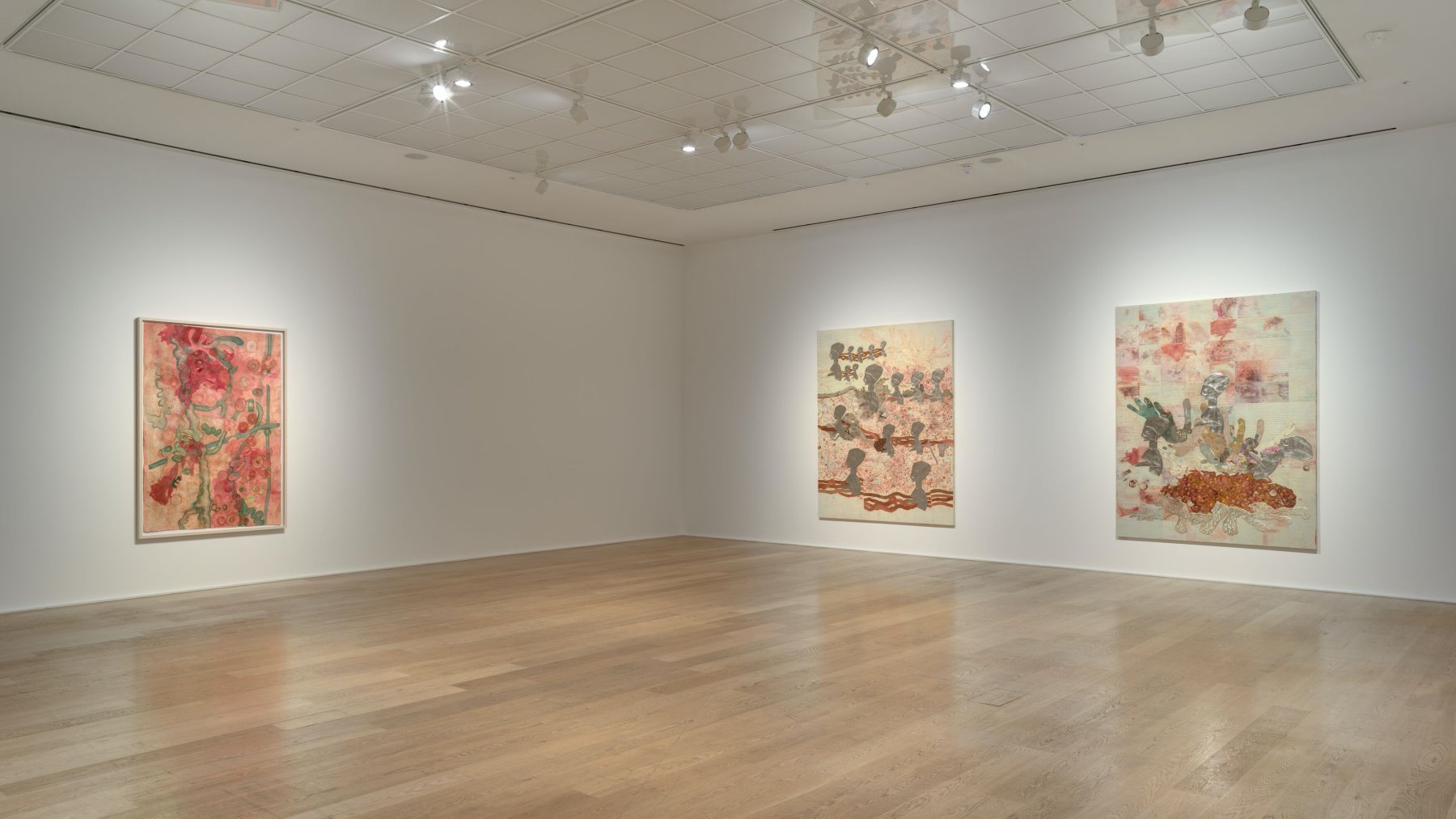 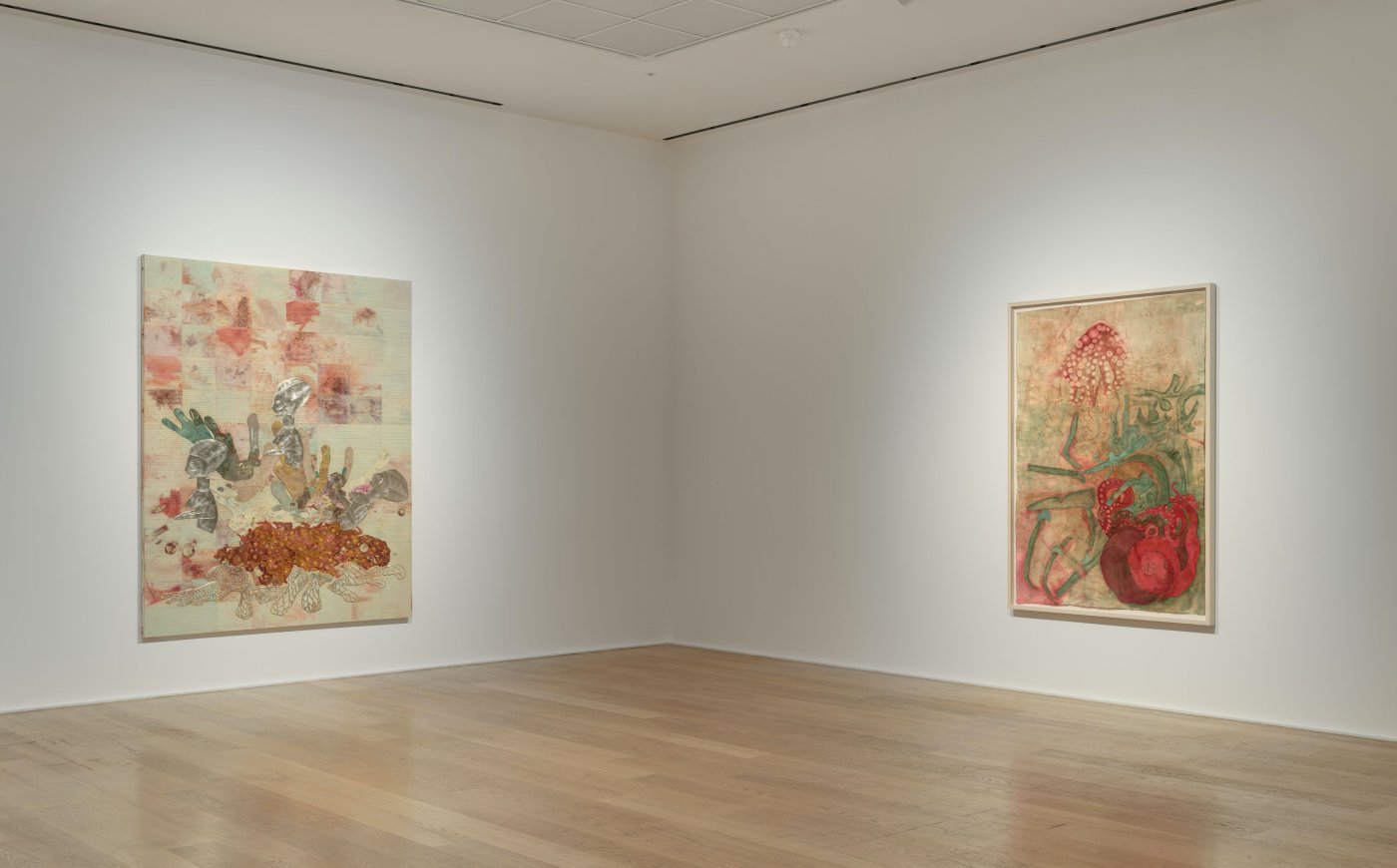 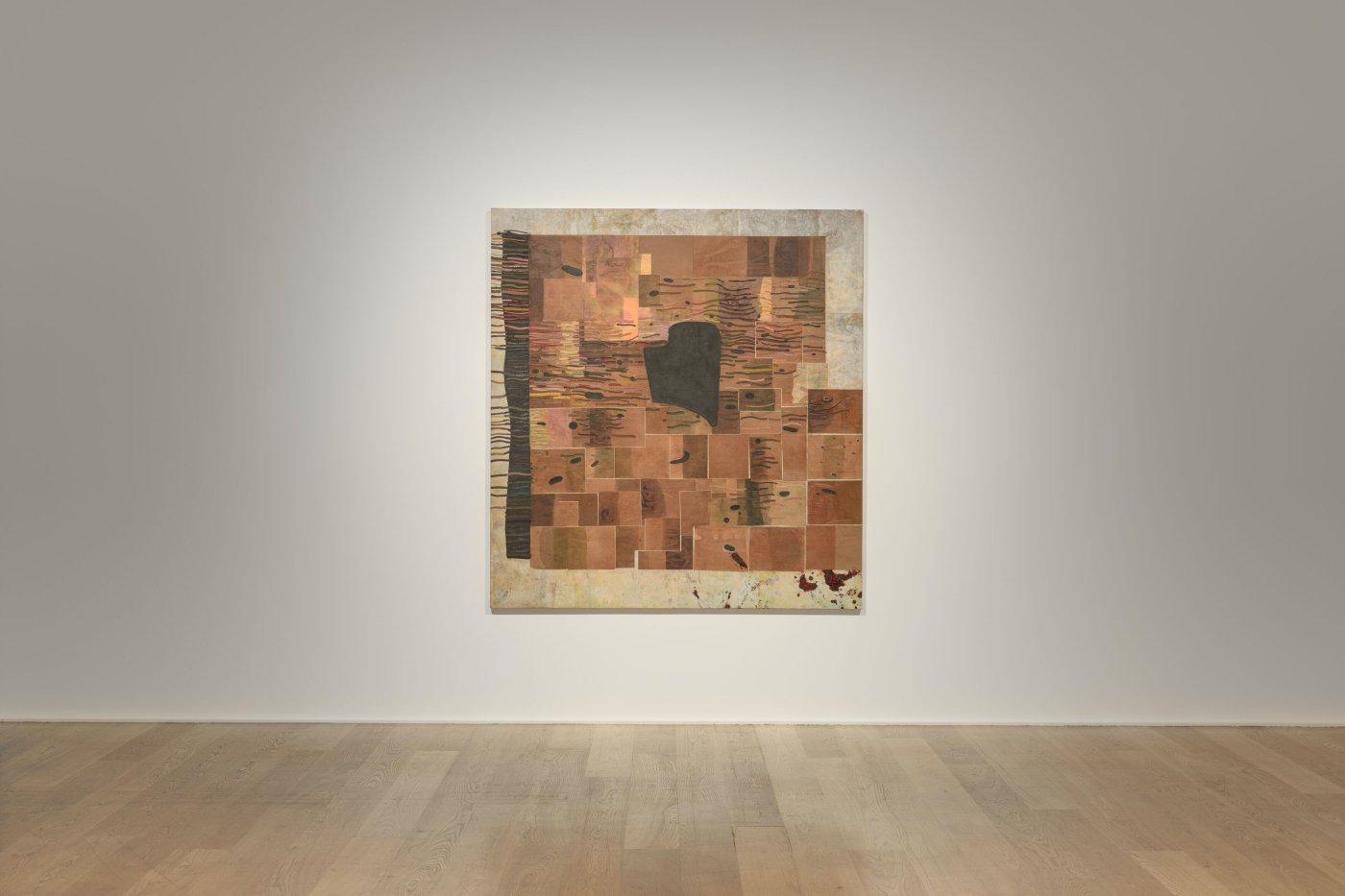 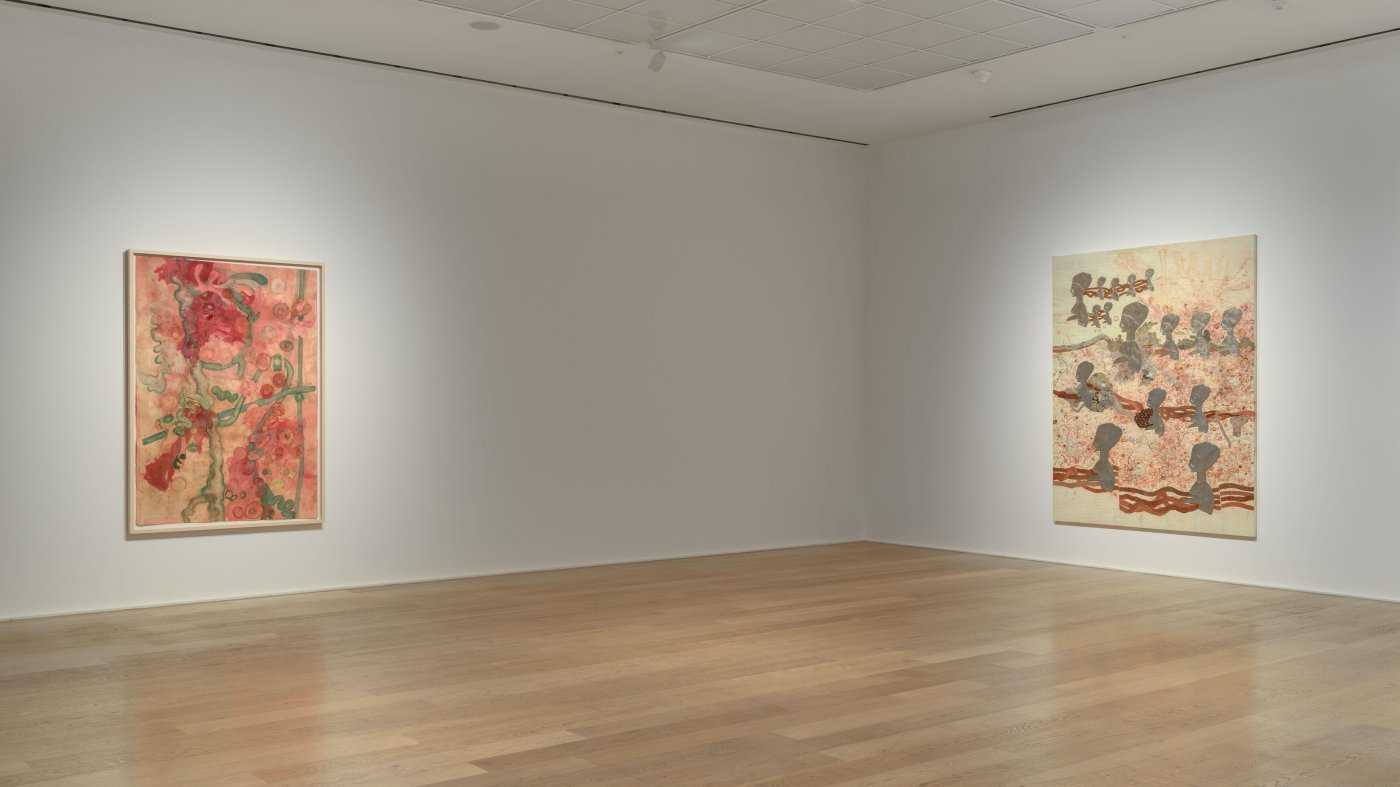 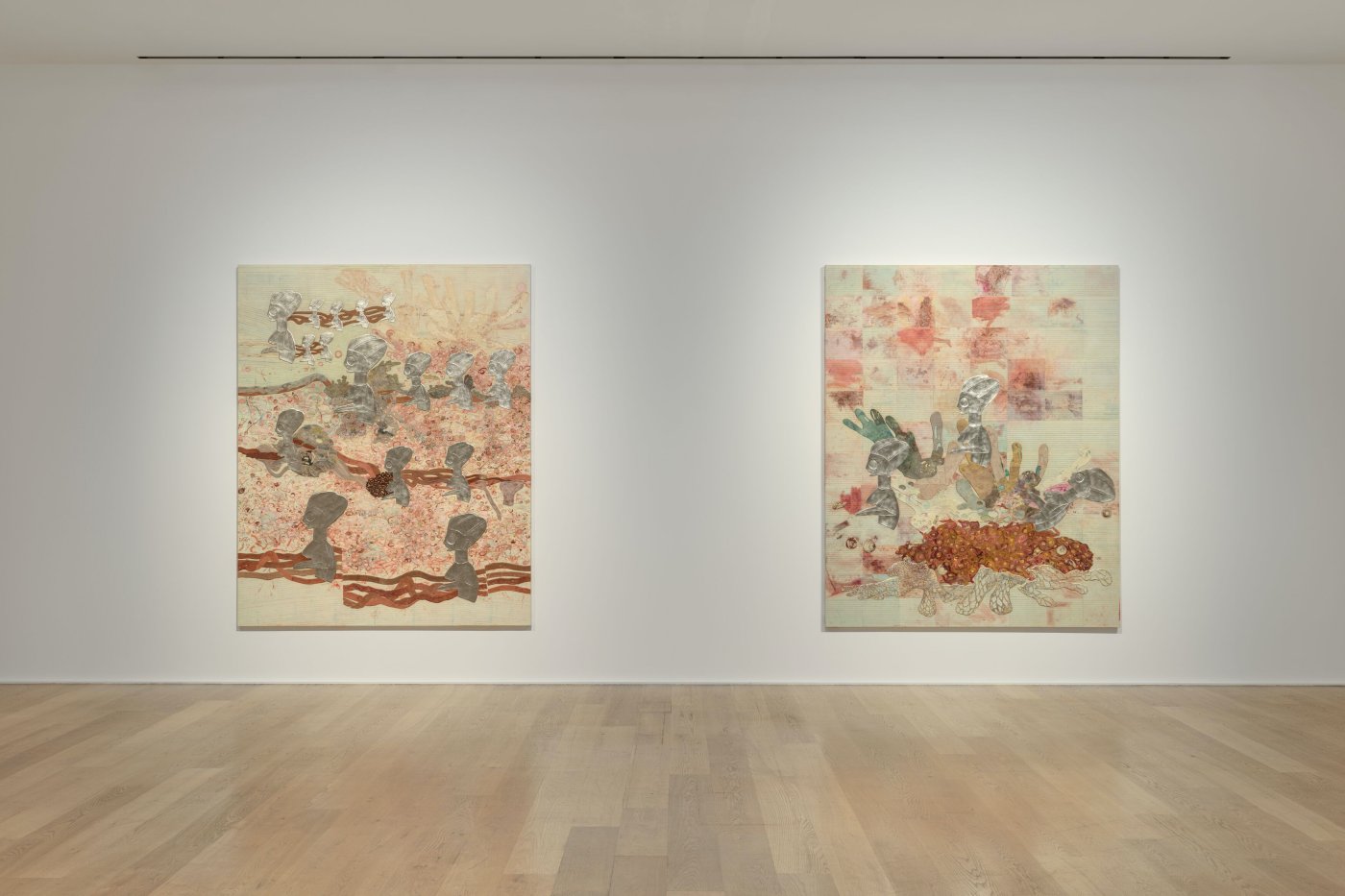 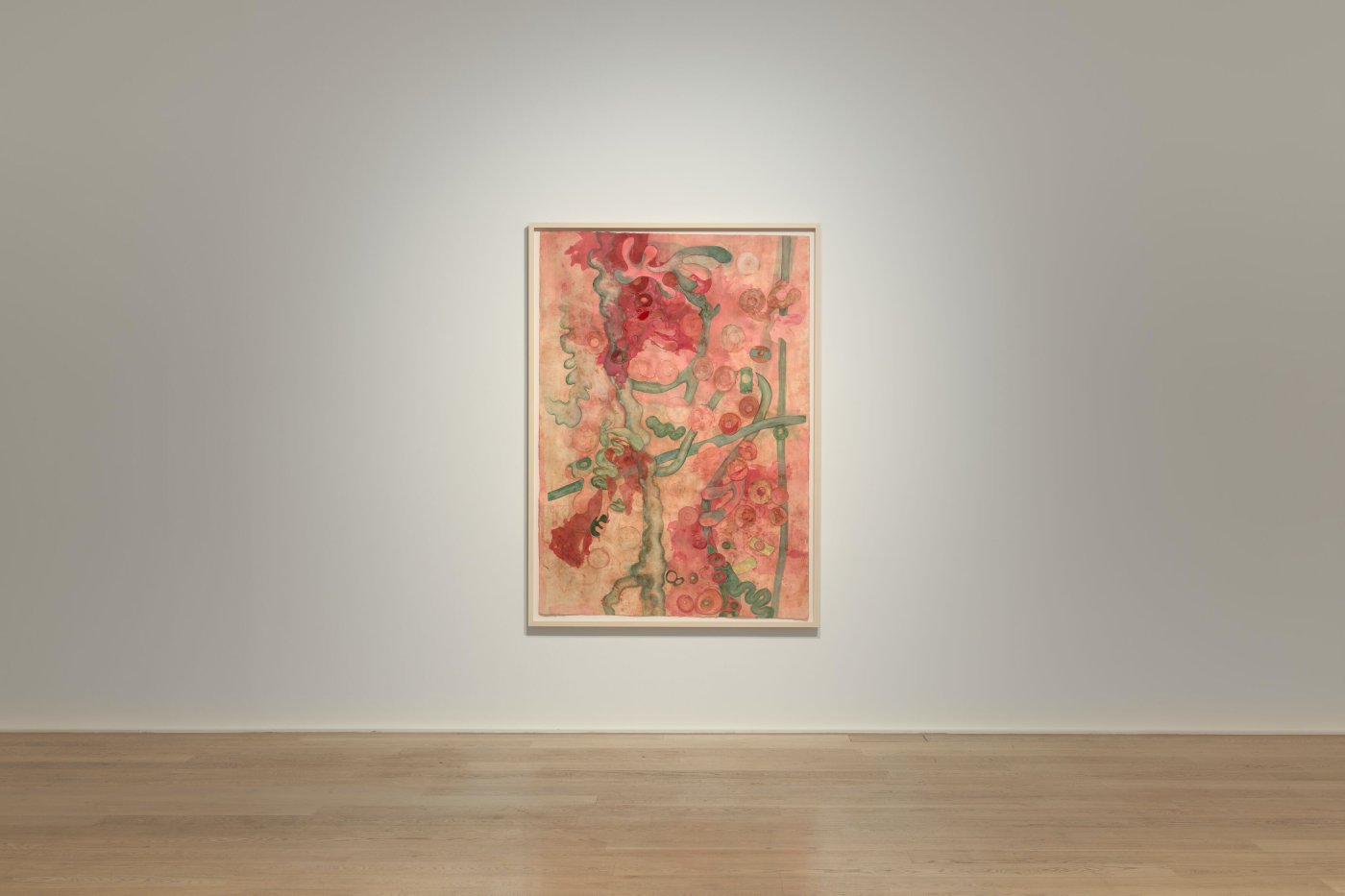 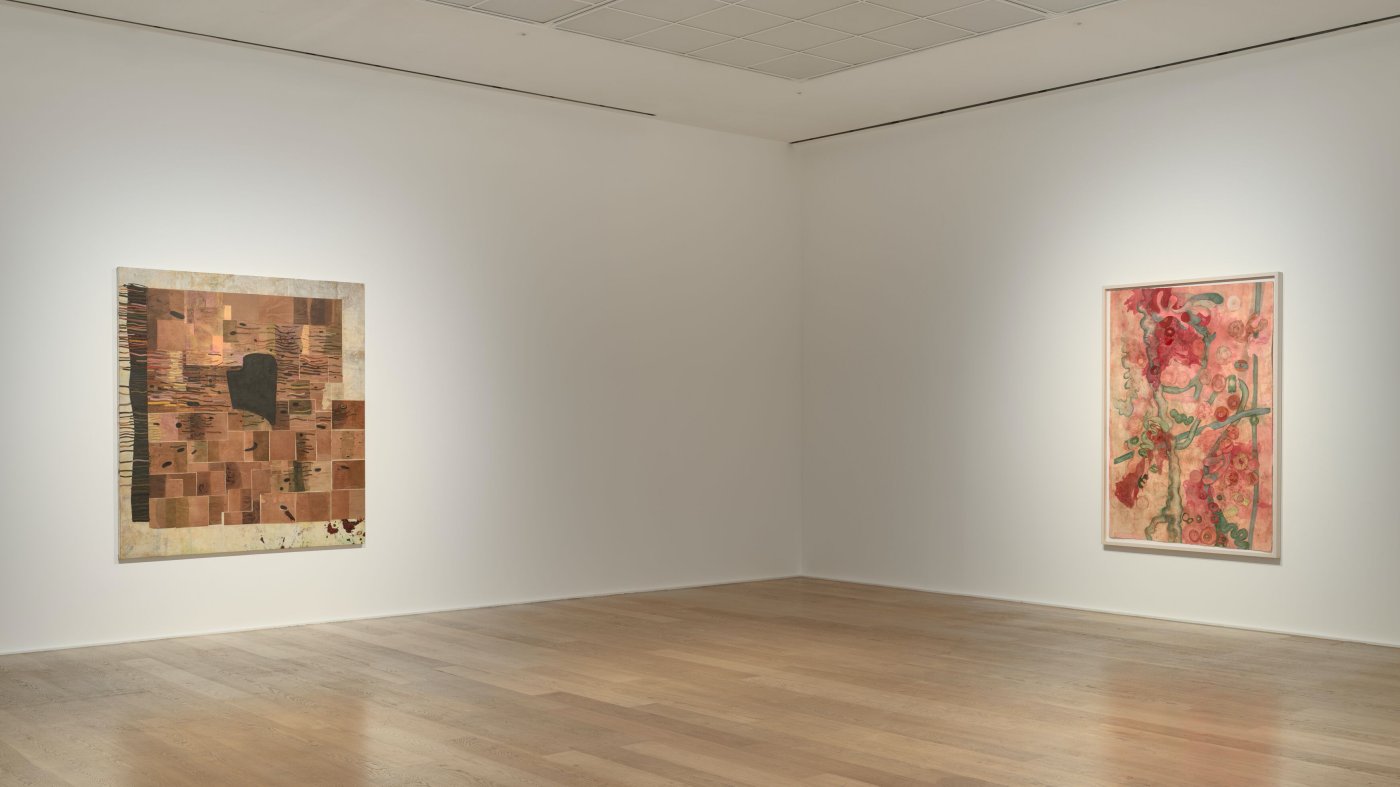 Since the early 1990s, Gallagher has created a polyvalent body of work encompassing painting, drawing, collage and celluloid based projections that fuse technique and material into syncretic form. Her arresting compositions are a process of recovery and reconstitution through the accumulation and erasure of media, which results in palimpsestic and topographic surfaces that are often carved, inlaid, mounted, printed, blotted and inscribed. The subtile textures of her work bear witness to a singular process that is materially and conceptually intertwined.

In the intricately variegated Ecstatic Draught of Fishes paintings, Gallagher investigates the parallels between the history of slavery, colonialism and belief systems, in relation to oceanographic natural history. Besides the title, which spans different moments in art history through the course of the three distinct paintings it encompasses, Gallagher focuses our attention on the draught yet to yield. The basis for the recent works lies in three historical paintings: ‘The Miraculous Draught of Fishes’ (1618–19), Peter Paul Rubens’ depiction of a miracle from Christ; ‘The Raft of the Medusa’ (1819) by Théodore Géricault, showing the aftermath of a shipwreck of colonists off the coast of today’s Mauritania; and J.M.W Turner’s ‘Slave Ship’ (1840), which illustrates the barbaric act of slaves being thrown overboard to relieve weight during a storm. These paintings seem to have been overlaid and atomized in Gallagher’s intense and delicate works. Myriad spots resembling eyes form shimmering, amoebic clouds on backgrounds of penmanship paper, while palladium-leaf caryatids proliferate.

In a new group of works on paper from Gallagher’s Watery Ecstatic series, the artist employs oceanographic history, Black-Atlantis mythology, and ideas around colonial mapping to cultivate complex biomorphic forms. The most resounding influence of the new watercolours comes from the mappings of 17th-century Dutch artist Albert Eckhout, who travelled with the Dutch Royal Court in the 1630s to document their conquest of the prosperous sugarcane-producing region in the northeast of the Portuguese colony, Brazil. Gallagher’s watercolours probe and draw upon ‘commodity portraits’ of the African and Indigenous populations of Brazil that Eckhout produced as part of a project of imperial mapping intended to catalogue the local flora, fauna, people, and customs in the new territory. The long-standing influence of the Afro-futurist myth of Drexciya, originally imagined in the 1990s by the prominent Detroit-based electronic music duo of the same name, further informs Gallagher’s engagement with Eckhout’s catalogue. Drexciya propose a free-floating unclassified existence beyond surveillance; a submarine realm populated by the unborn children of pregnant African women thrown off slave ships during the centuries-long Middle Passage slave trade. Here, their offspring have adapted gills and proliferate as UFO’s (unidentified floating objects).

A work by Gallagher entitled ‘Paradise Shift’ (2020), which draws us down to the depths of the ocean floor, will also be on display. The artist combines paper and canvas that has been stretched and incised in striated areas. The penmanship paper support is awash with saturations of umber and clay hued pigments, creating a geographic timeline in which interlocking forms appear to mutate between figuration and abstraction, like agents in a musical composition coming together in an evolving continuum.

Ellen Gallagher’s works are currently on view in ‘Grief and Grievance: Art and Mourning in America’ at the New Museum, New York, through June 2021. Gallagher is also participating in the 12th edition of Sonsbeek in the Netherlands, for which she has made an installation of work in the Eusebiuskerk, a large church in Arnhem, on view from June 2021 until September 2021. The first monograph to provide a comprehensive overview of Ellen Gallagher’s career by Caoimhín Mac Giolla Léith will be published by Lund Humphries on 7 October 2021.