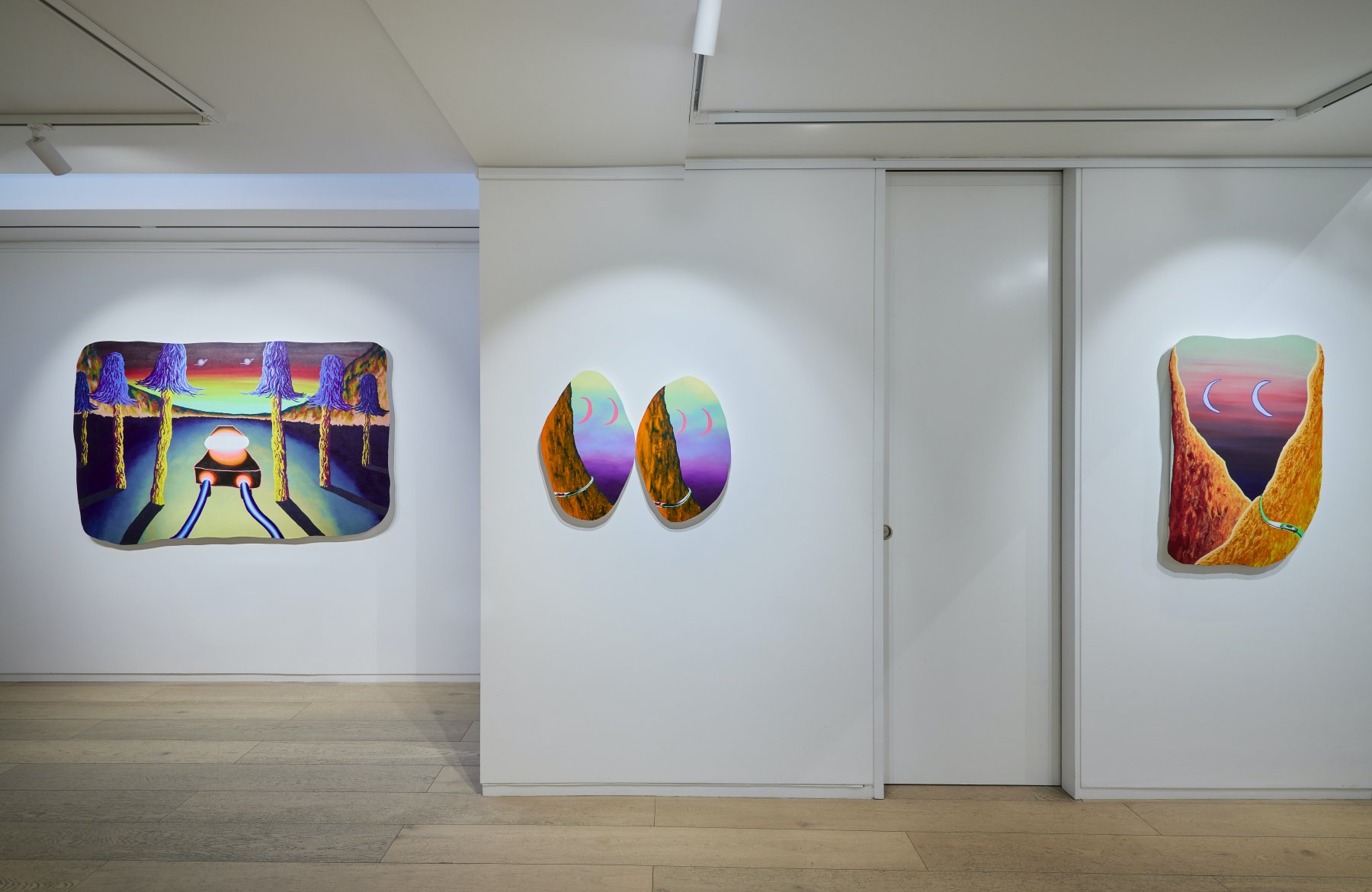 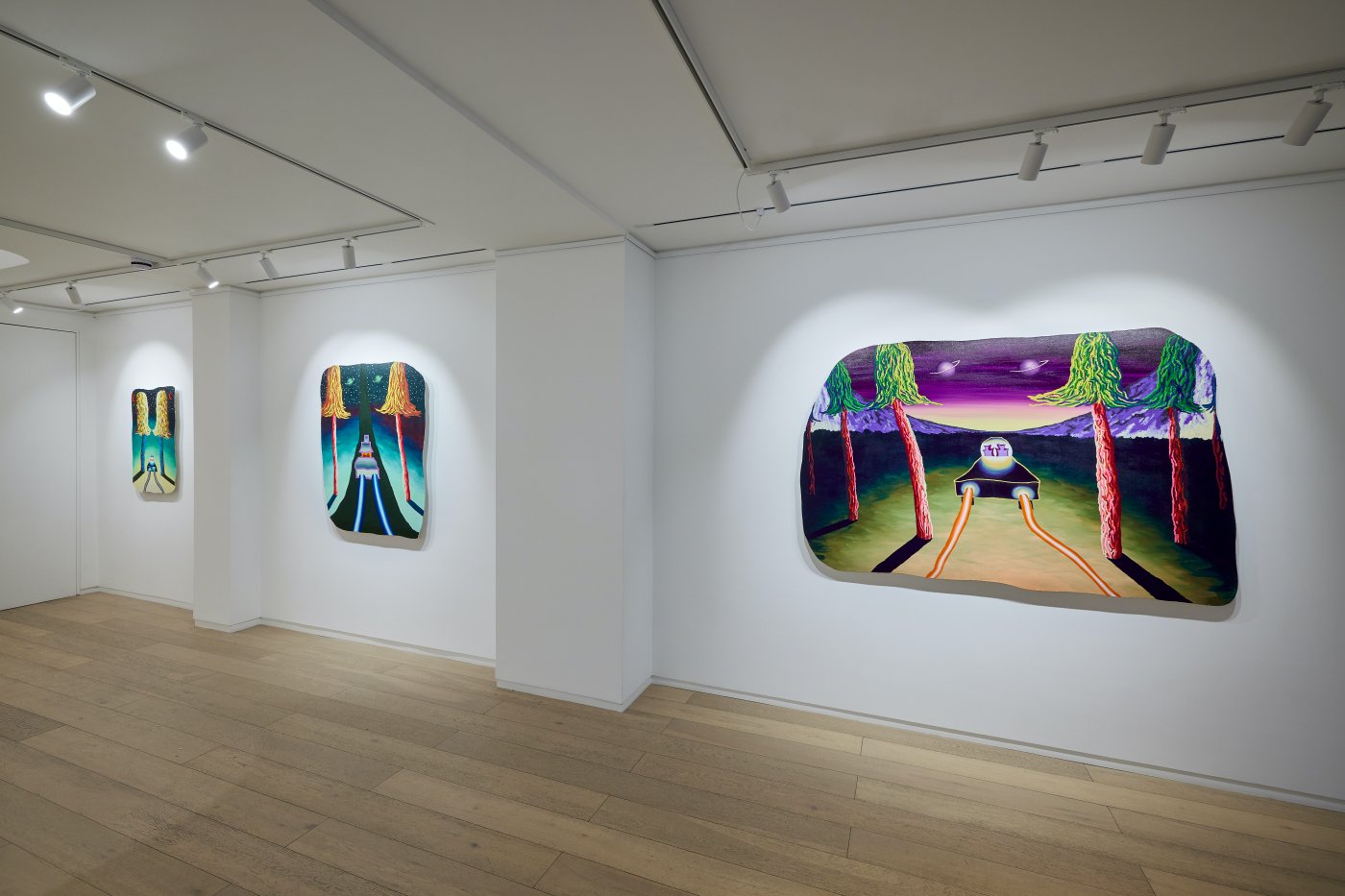 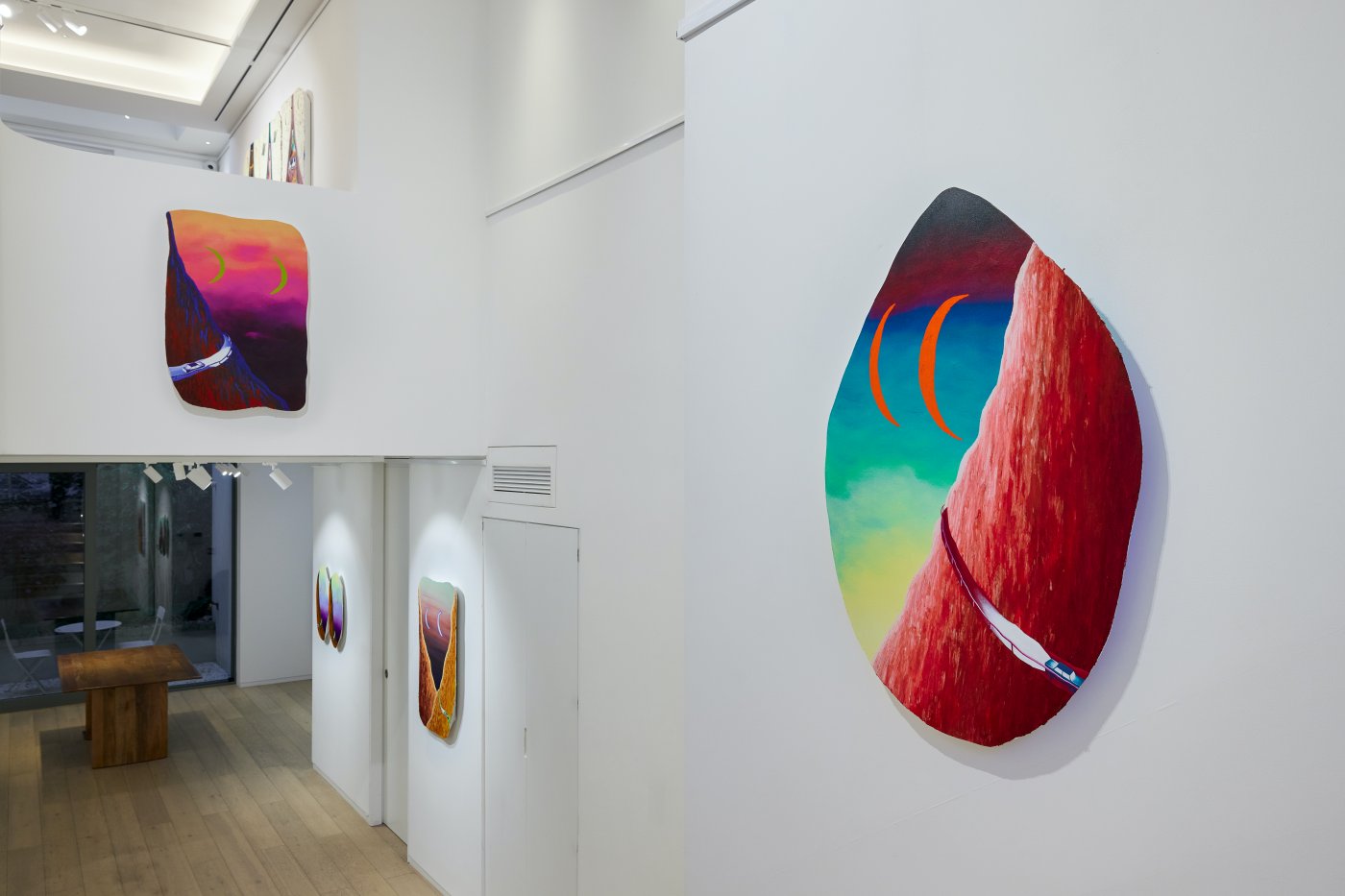 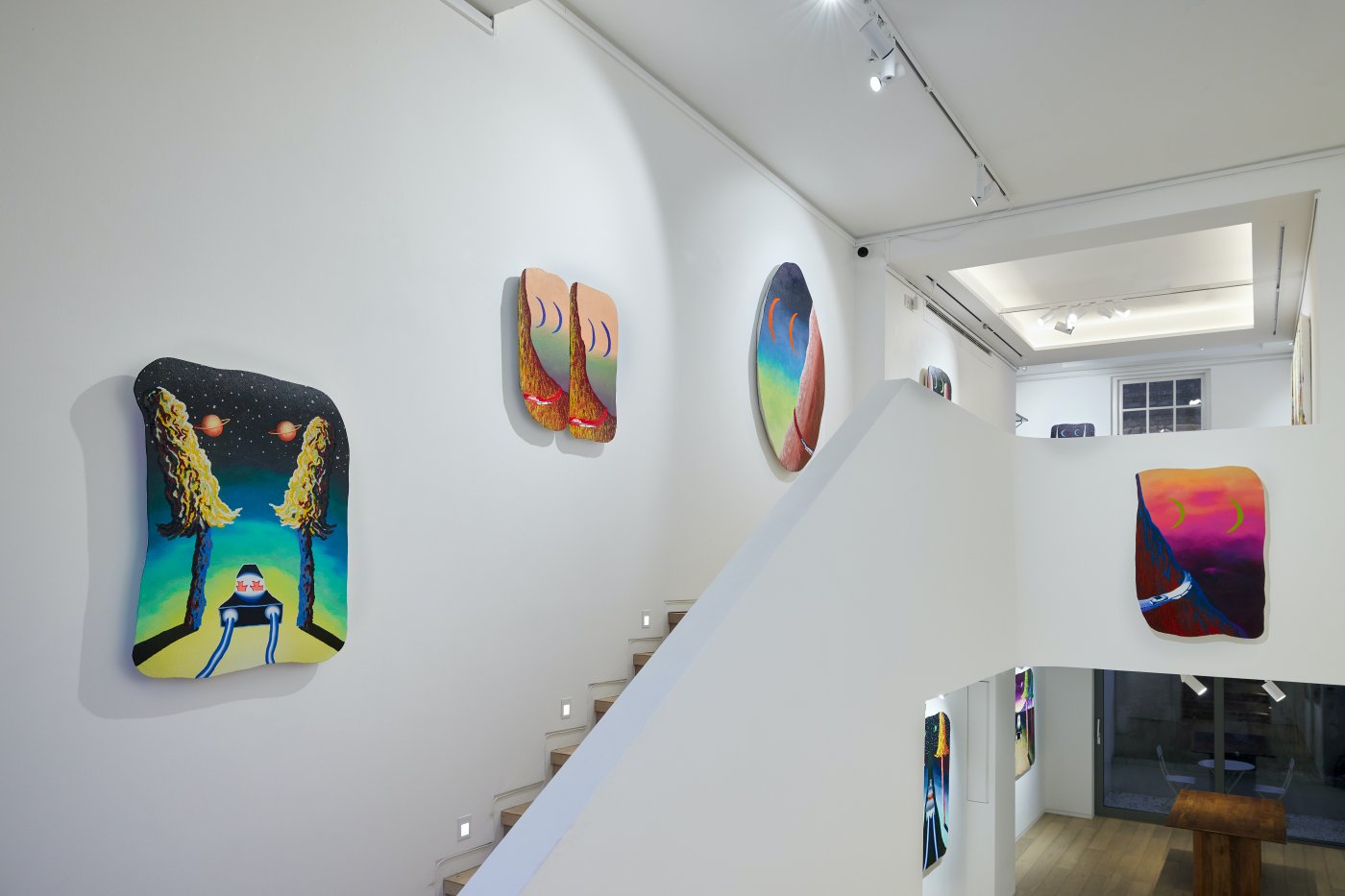 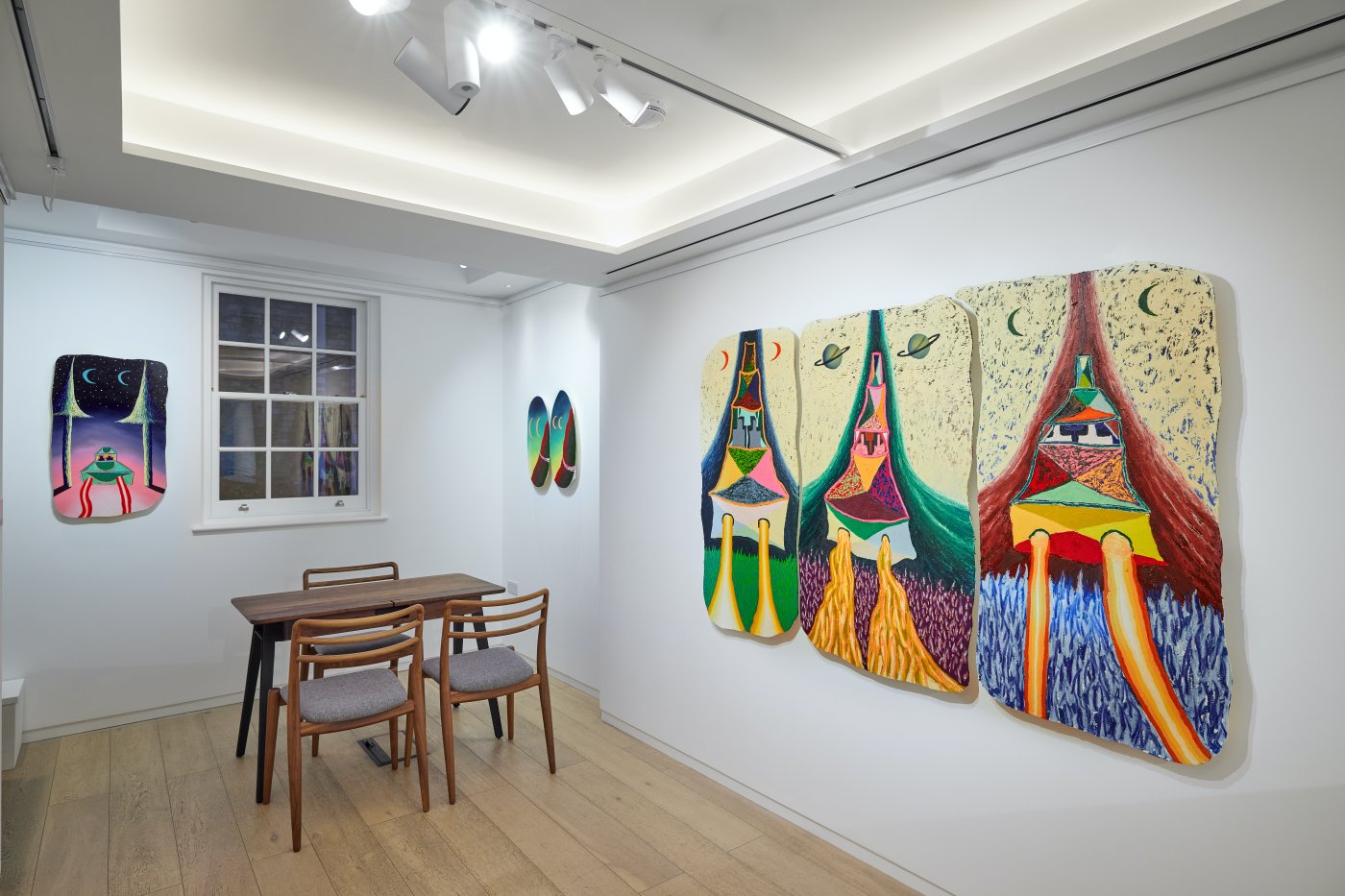 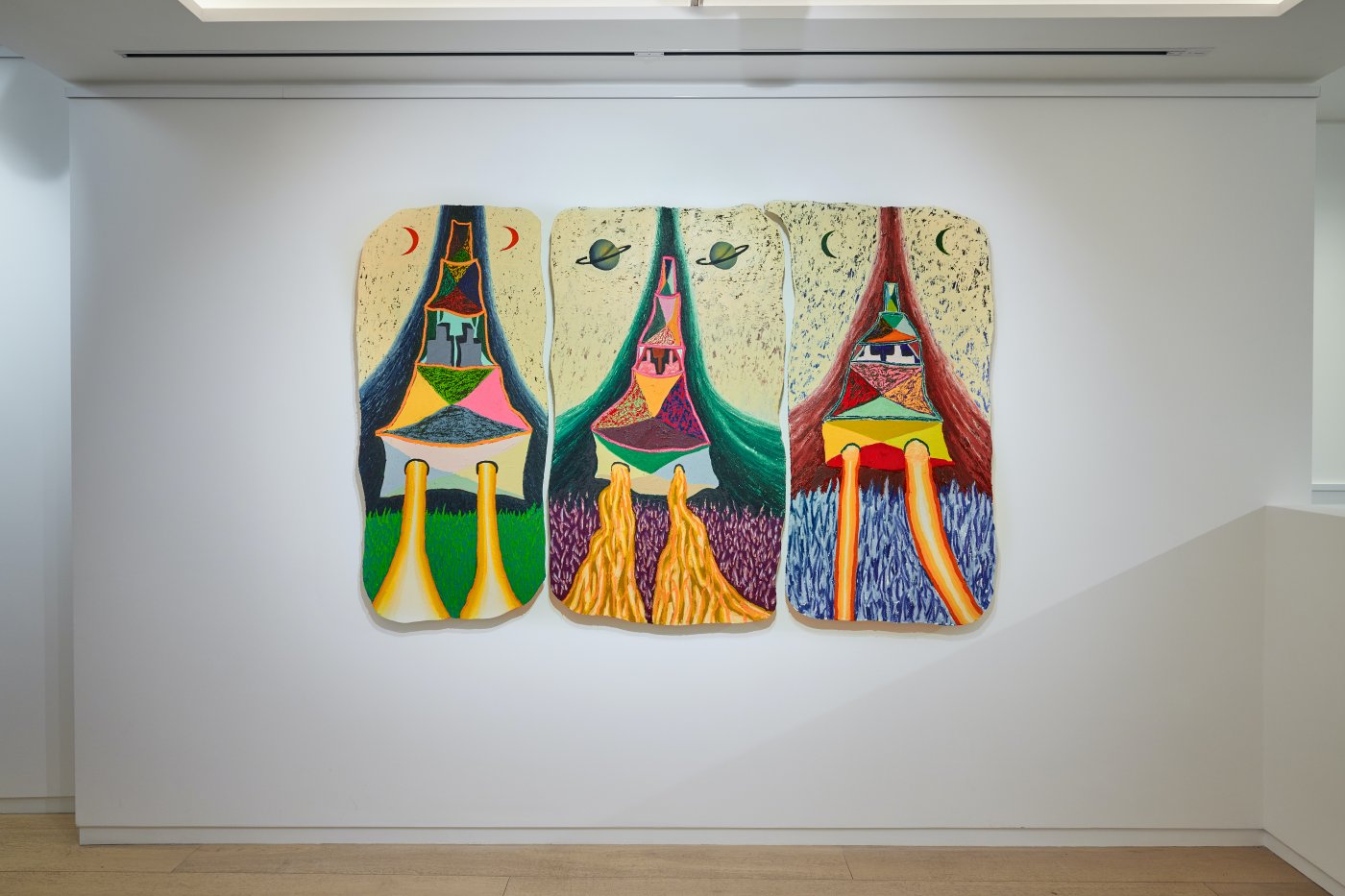 Eliot Greenwald’s newly commissioned paintings and drawings offer a new approach to his Night Car series. The iconography of the Night Car appears throughout Eliot’s body of work like a personal mythology where a driverless car moves through sci-fi landscapes, picking up passengers under the gaze of two identical planets painted in bold reds, blues and yellows.

This time the theme has centered around the phrase Vague Distinction as the title of the show suggests – smooth transitions of colours and small details make the difference in compositions that (seemingly) repeat. The focus of this series is on the distinction between the earthly and the interstellar and how this blending relates to human perception – how one image can combine elements we can touch and experience tactically, with objects and ideas that are vague. Eliot’s inspiration for some of these works came from looking at tree tops against the night sky and how they are practically indistinguishable in colour to one another. The boundary of the tree to the sky is only defined by the appearance of stars behind it. This gives the tree its identity and the sky its own as well.

Through this series, Eliot explores the inherent beauty and nuances of change. Change, physical or metaphorical, is constant in nature and in physics, but also in humans with evolving ideas and relationships. These painted environments feature recurring elements like planets and mountains, and several pieces come in pairs of almost identical scenes. Inverted colour gradients and dreamy compositions connect the sky to the earth, and are traversed by the image of a road breaking through the horizon or background, morphing into a star filled night sky. Through the subtlety of locations of color and the inversions and extensions within each painting, Eliot expresses the truth of change; that it is both exhaustively repetitive and inherently varied. Vague Distinction represents a conflict for the artist as by using the element of symmetry he embraces repetition rather than recoiling from it.

Eliot Greenwald (b. 1983) is a contemporary American artist who was born and raised in Portland, Maine. He is a self taught artist who has been included in numerous group shows in New York City and throughout the US. Eliot is represented by Harper’s in New York City. Recently, Eliot has had solo exhibitions with Harper’s (NYC) and Hesse Flatow (NYC). He was included in Reflections: Human/Nature at Gana Contemporary in Seoul, South Korea and was shown at Art Central HK as part of the art fair’s curatorial selections. Upcoming shows include solos with Taymour Grahne Projects in London, M+B Gallery in Los Angeles, CA, and an inaugural group show at Harper’s LA. Eliot has been published in Art Maze Magazine, Let’s Panic, and featured on Juxtapoz, It’s Nice That, and Art News. Eliot lives and works in Ashfield, MA.