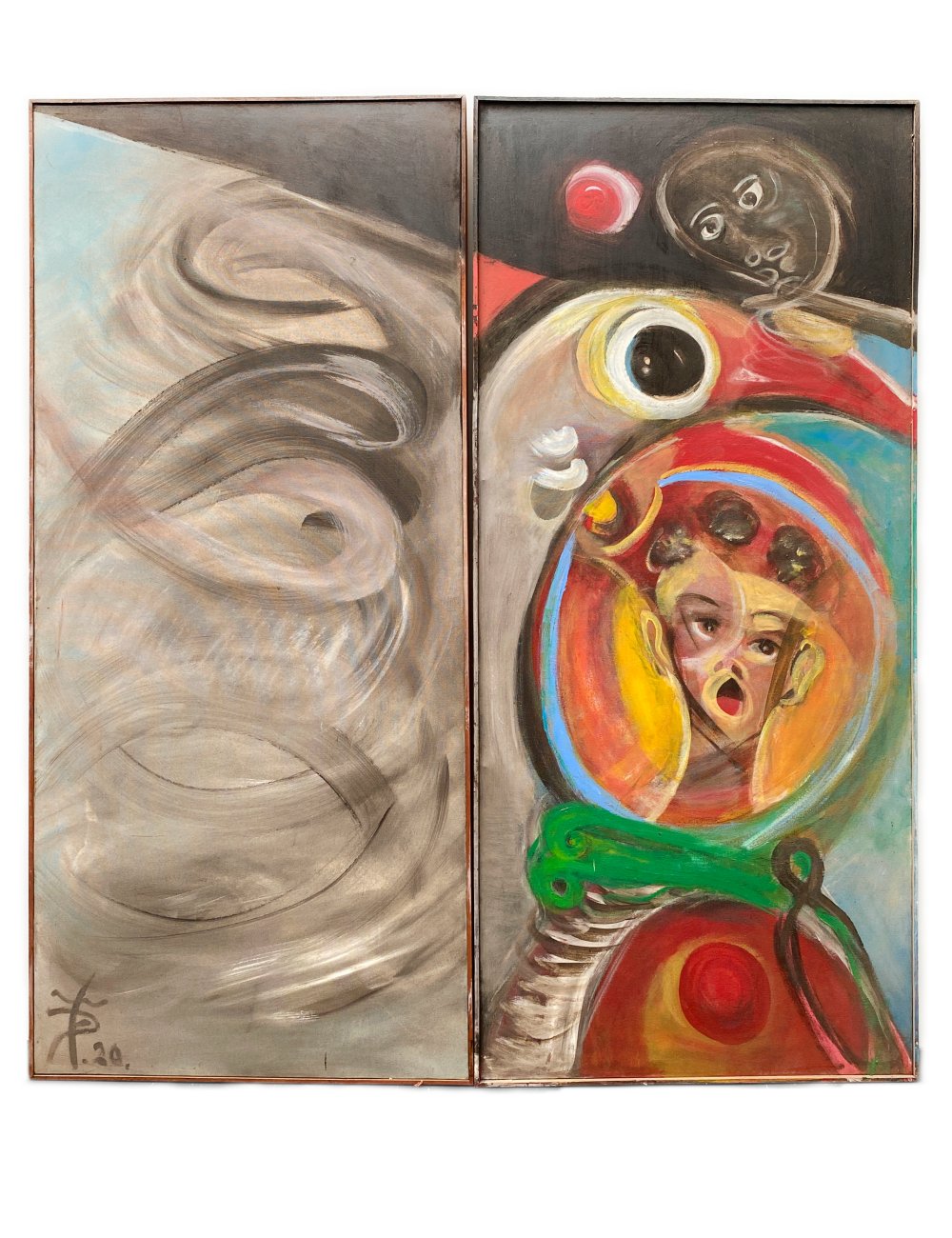 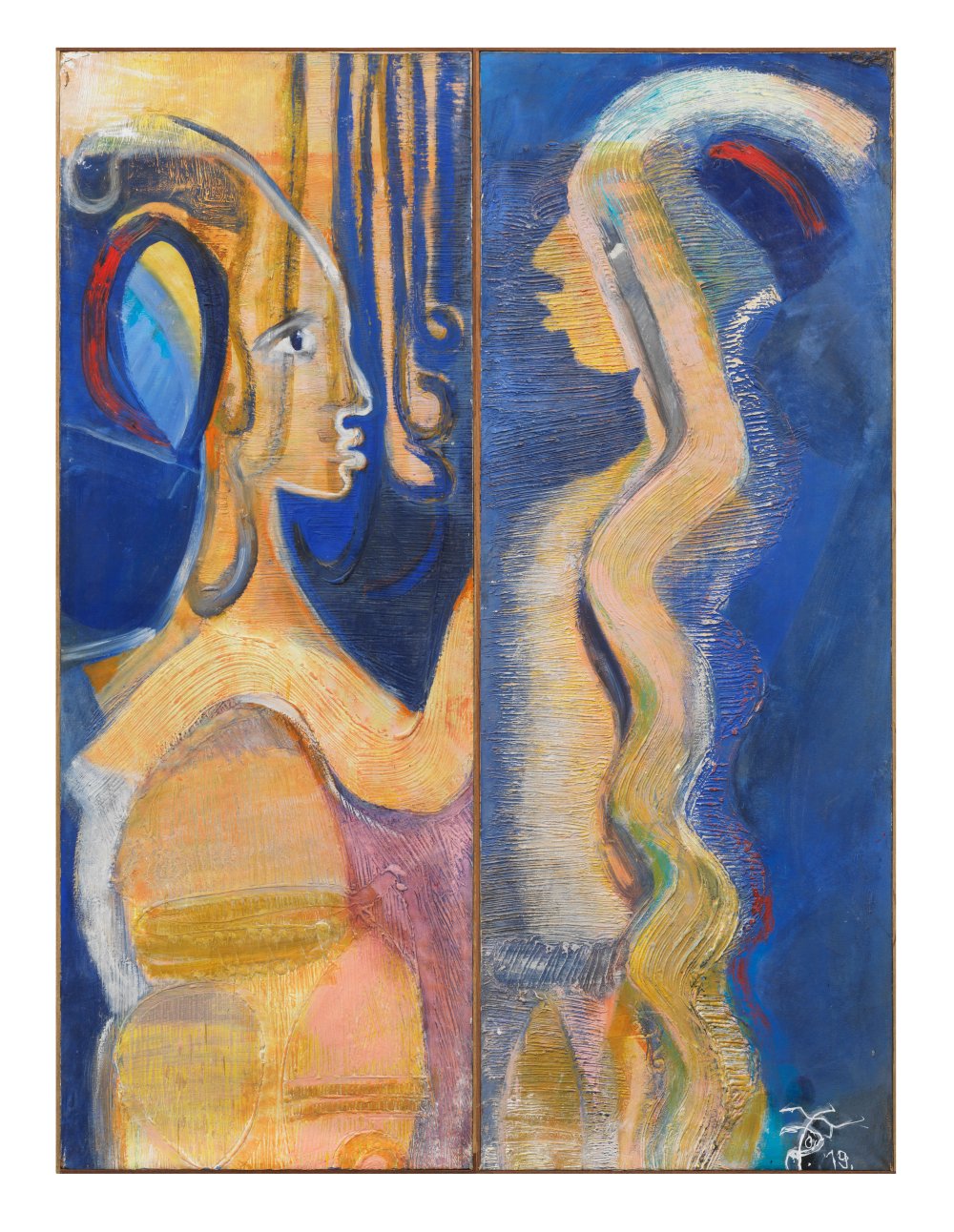 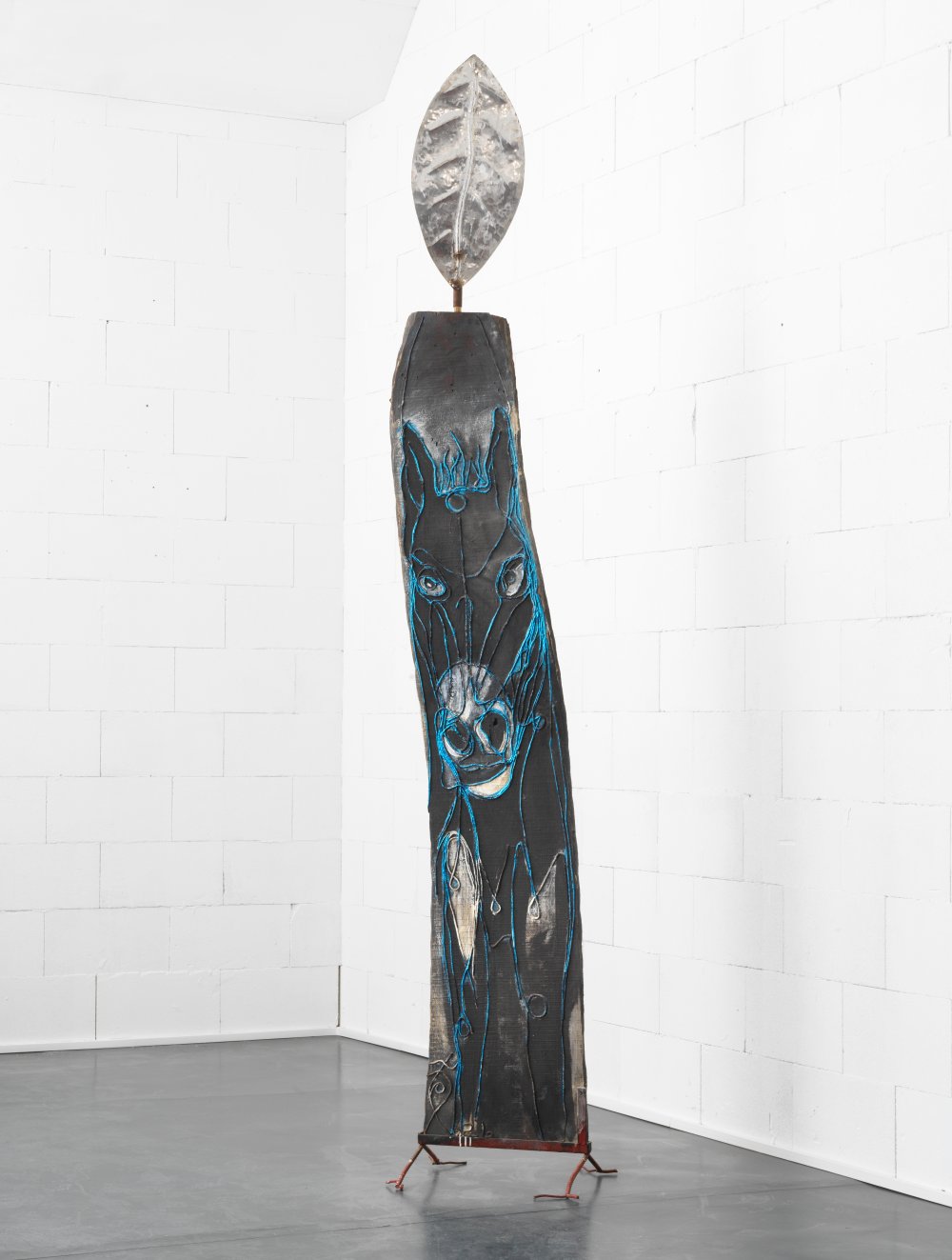 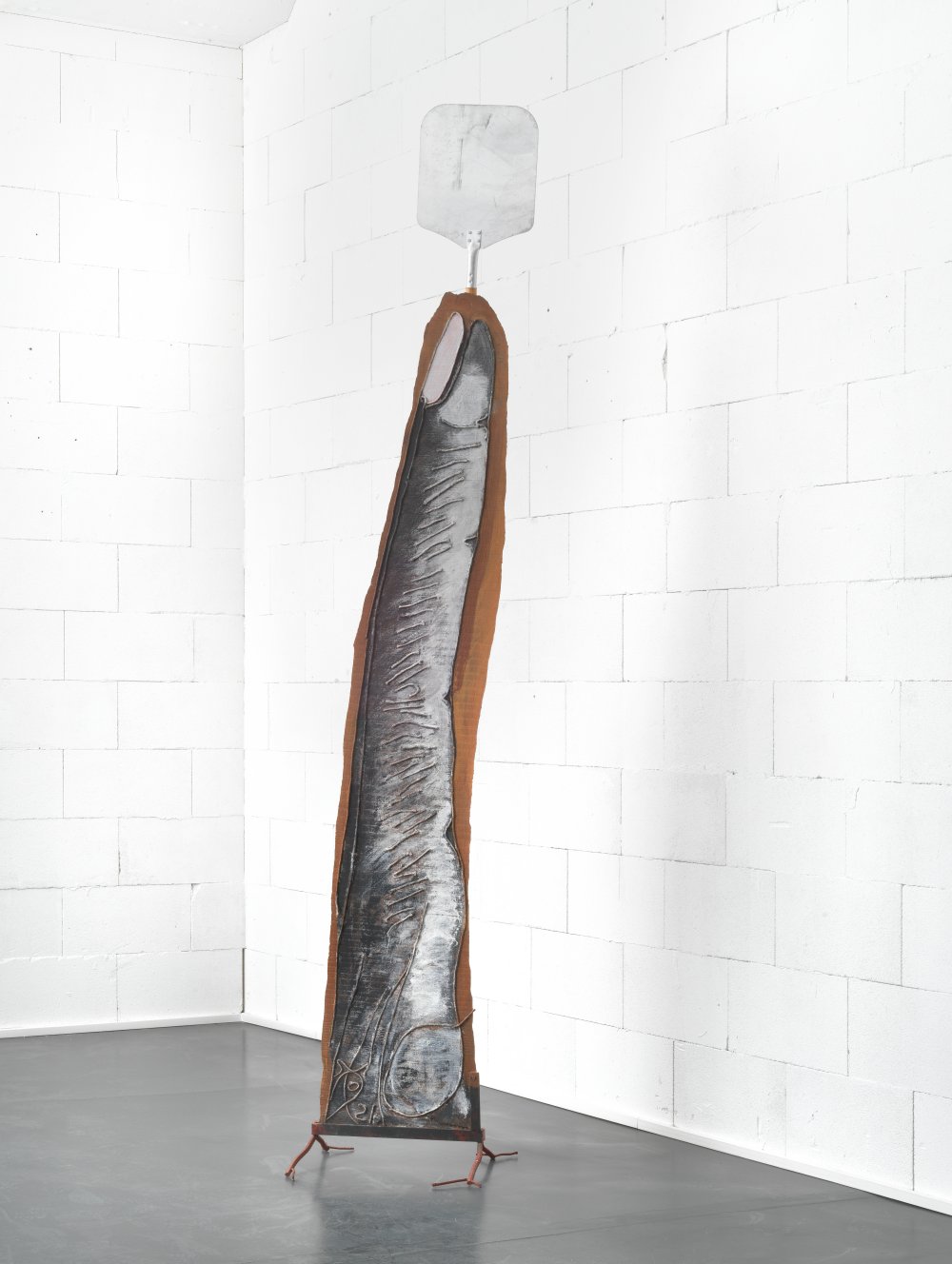 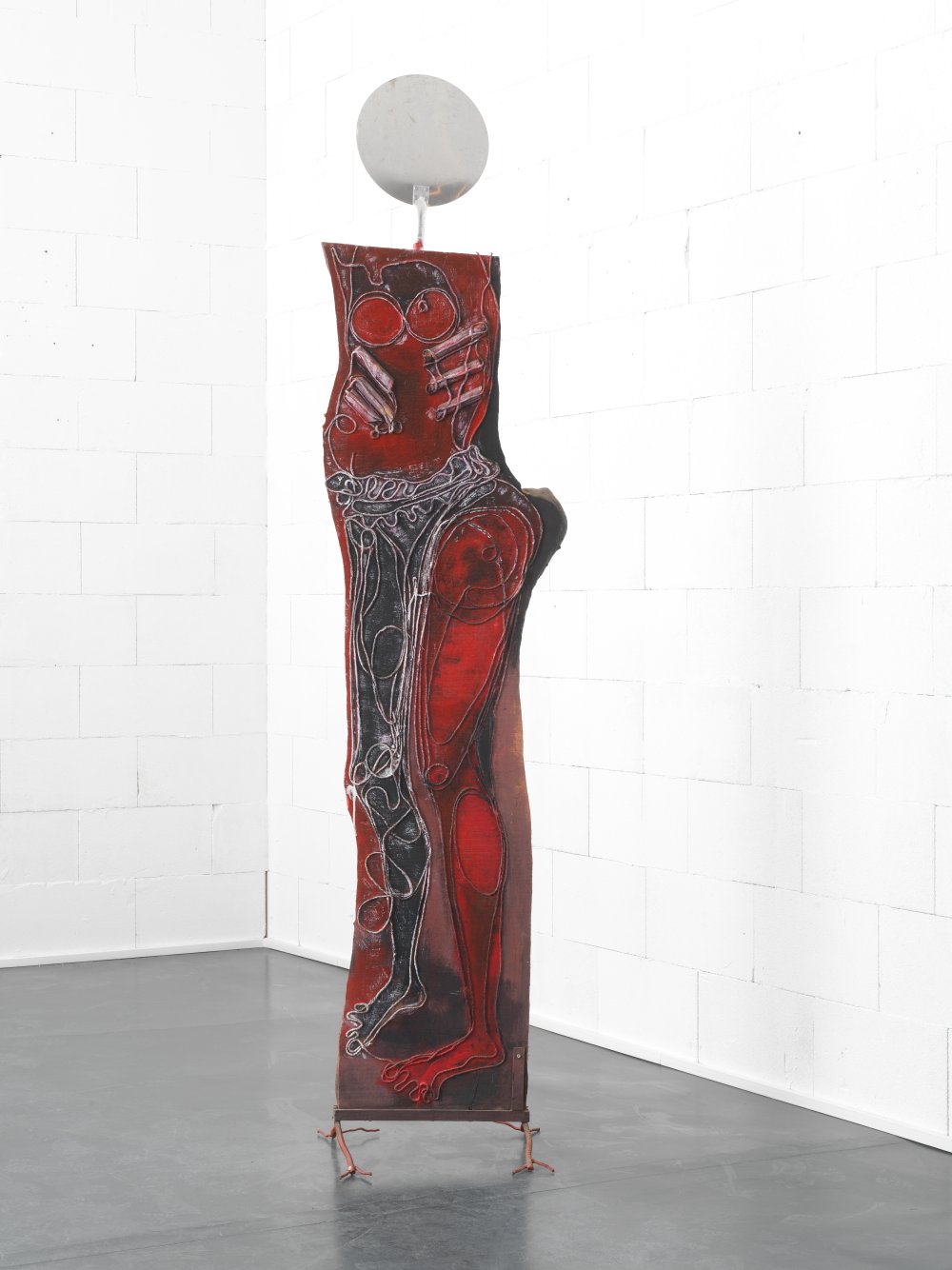 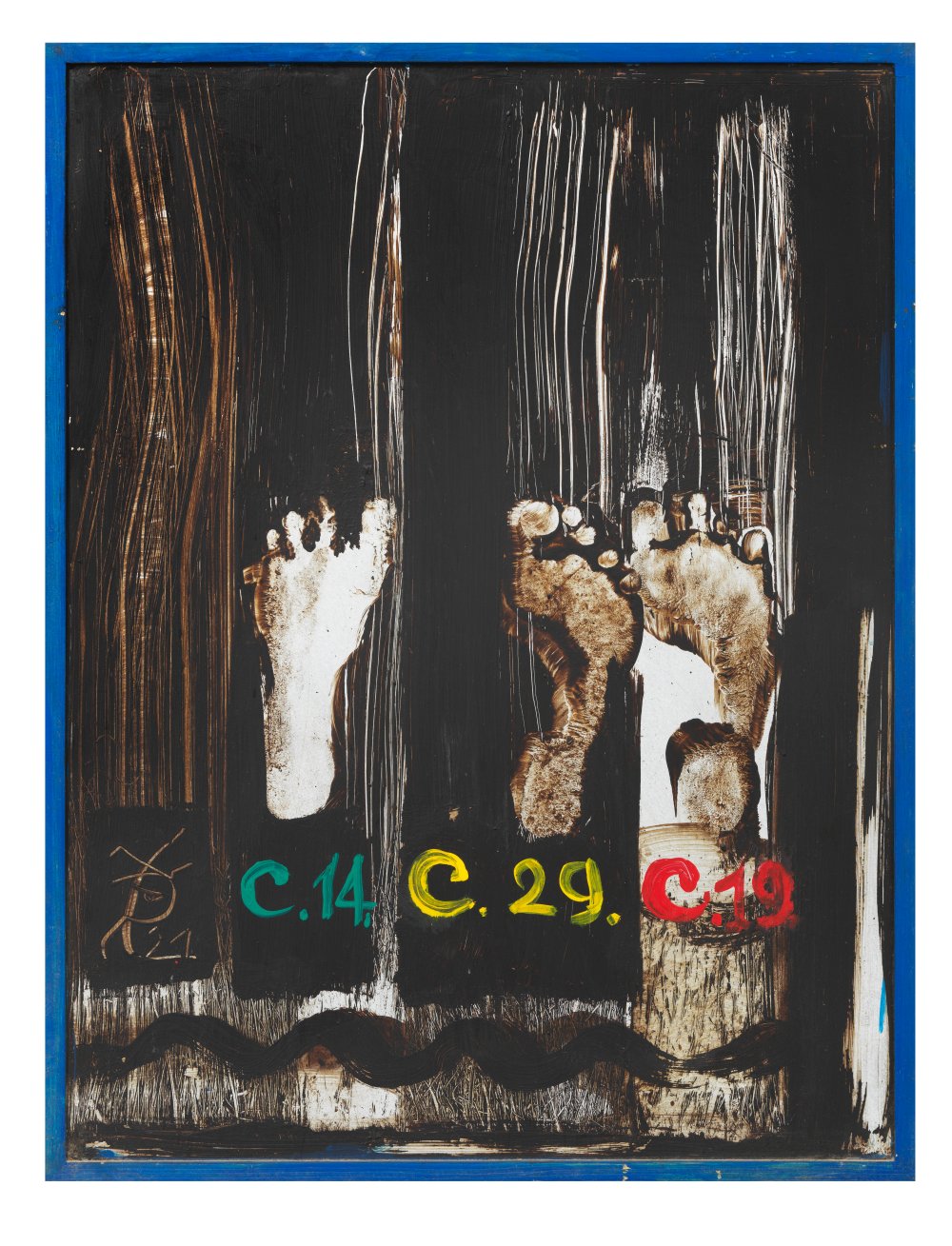 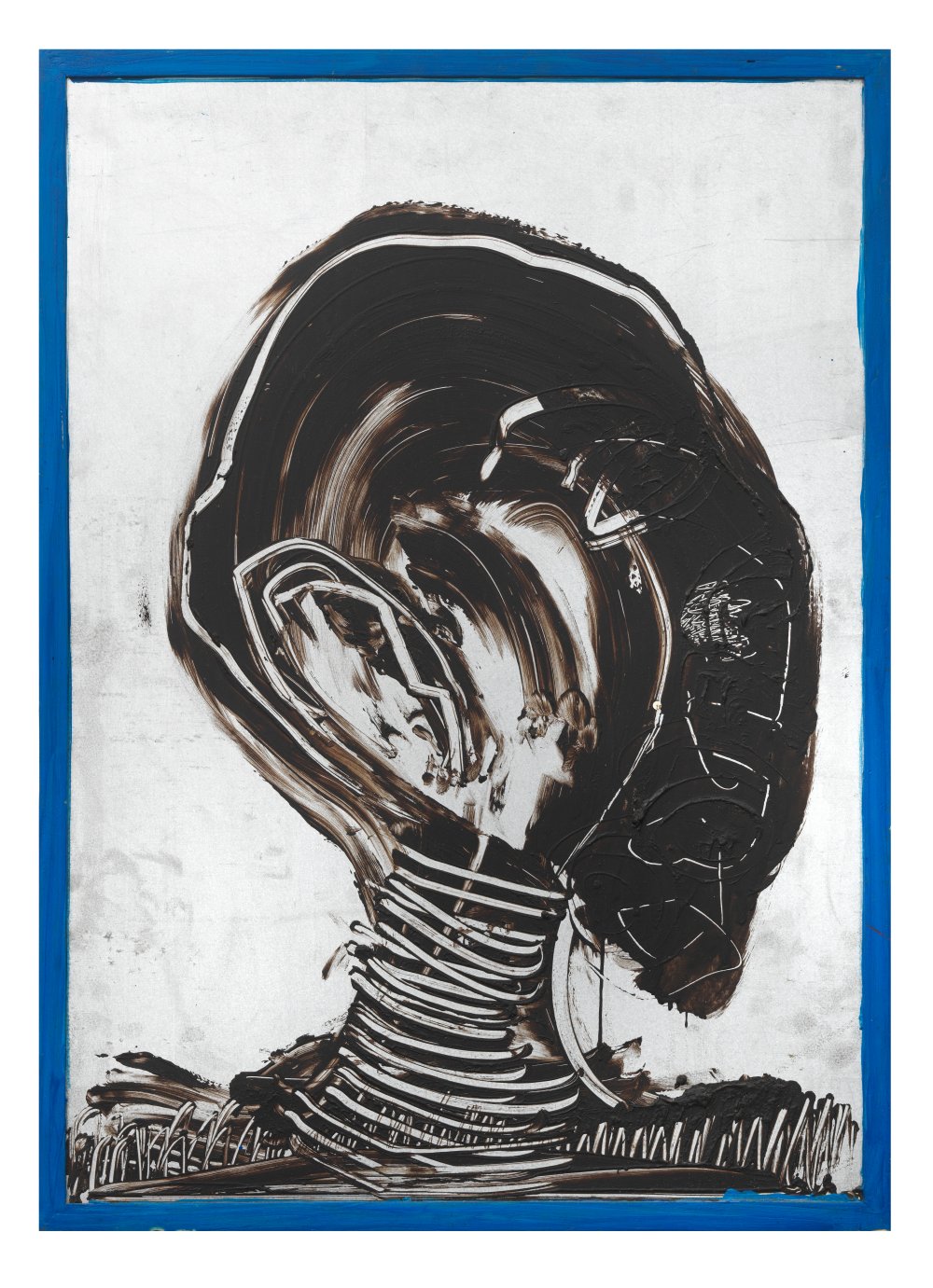 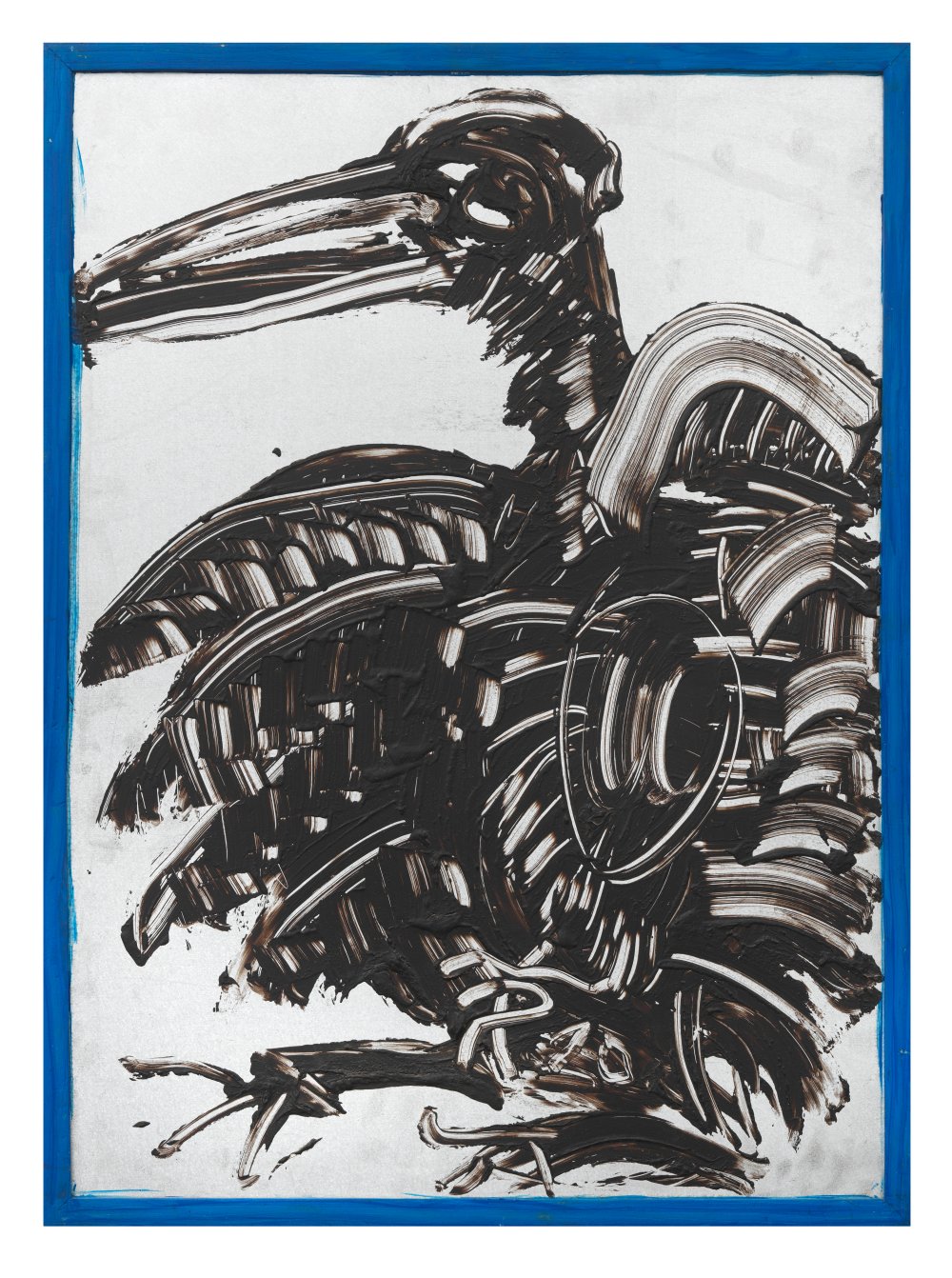 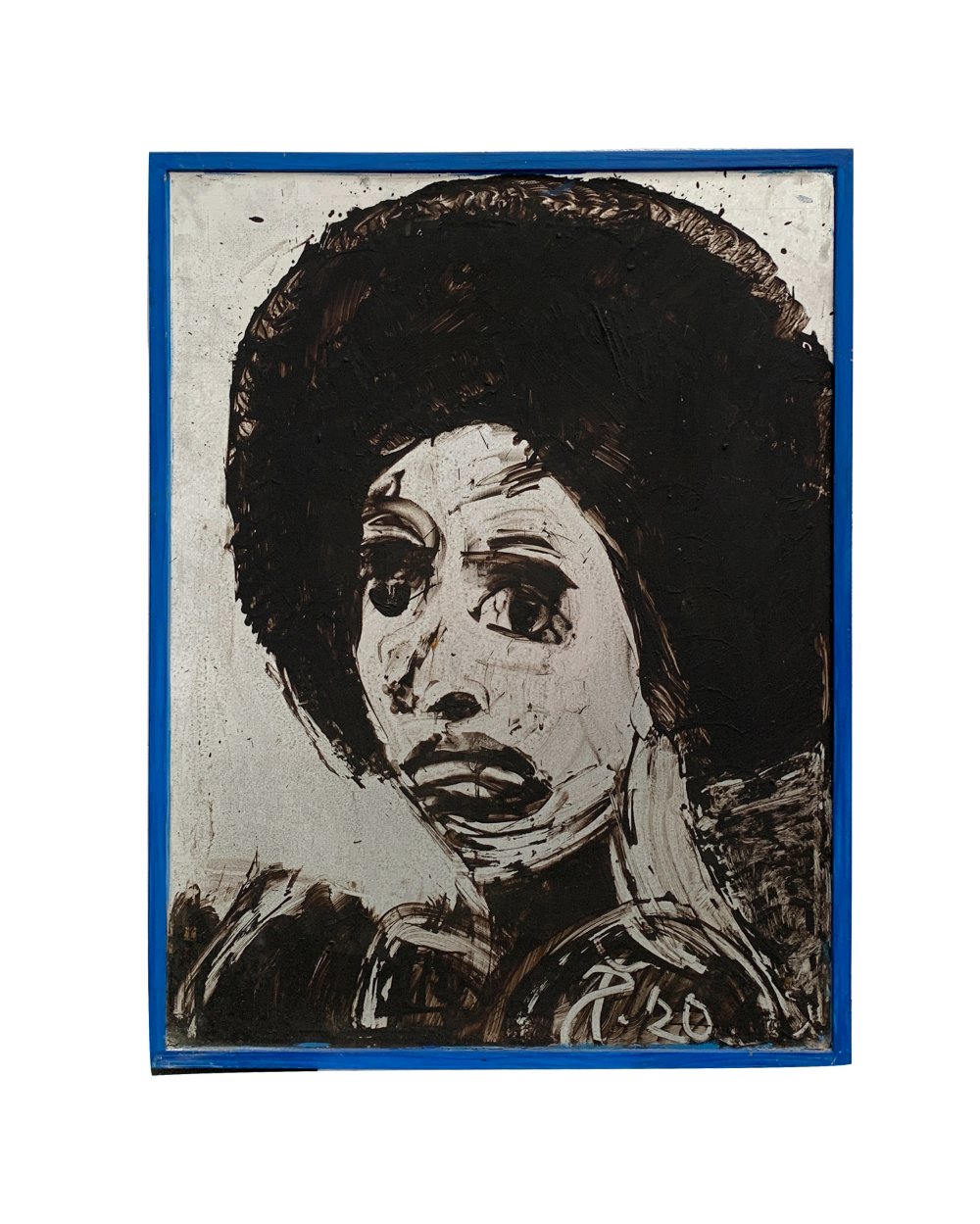 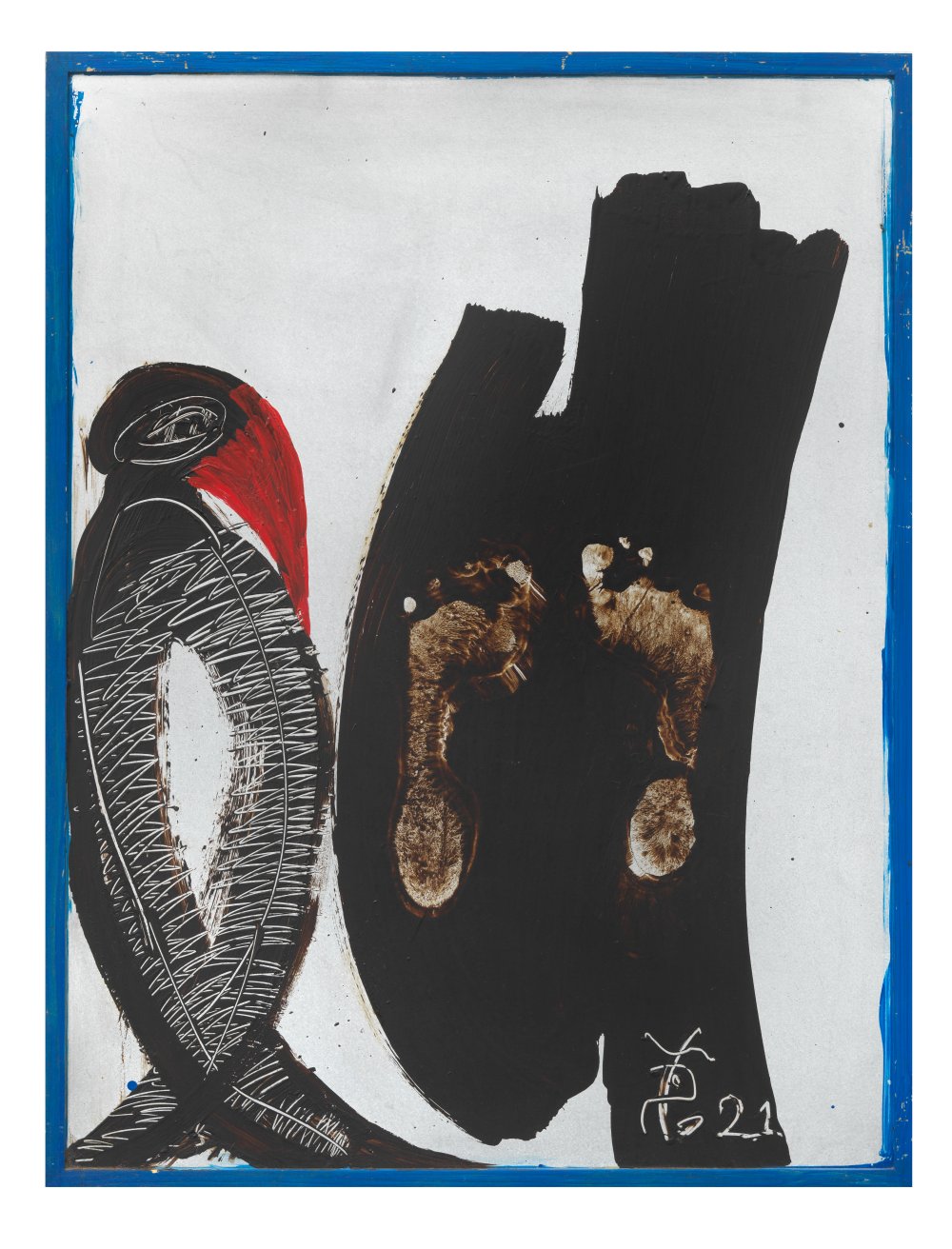 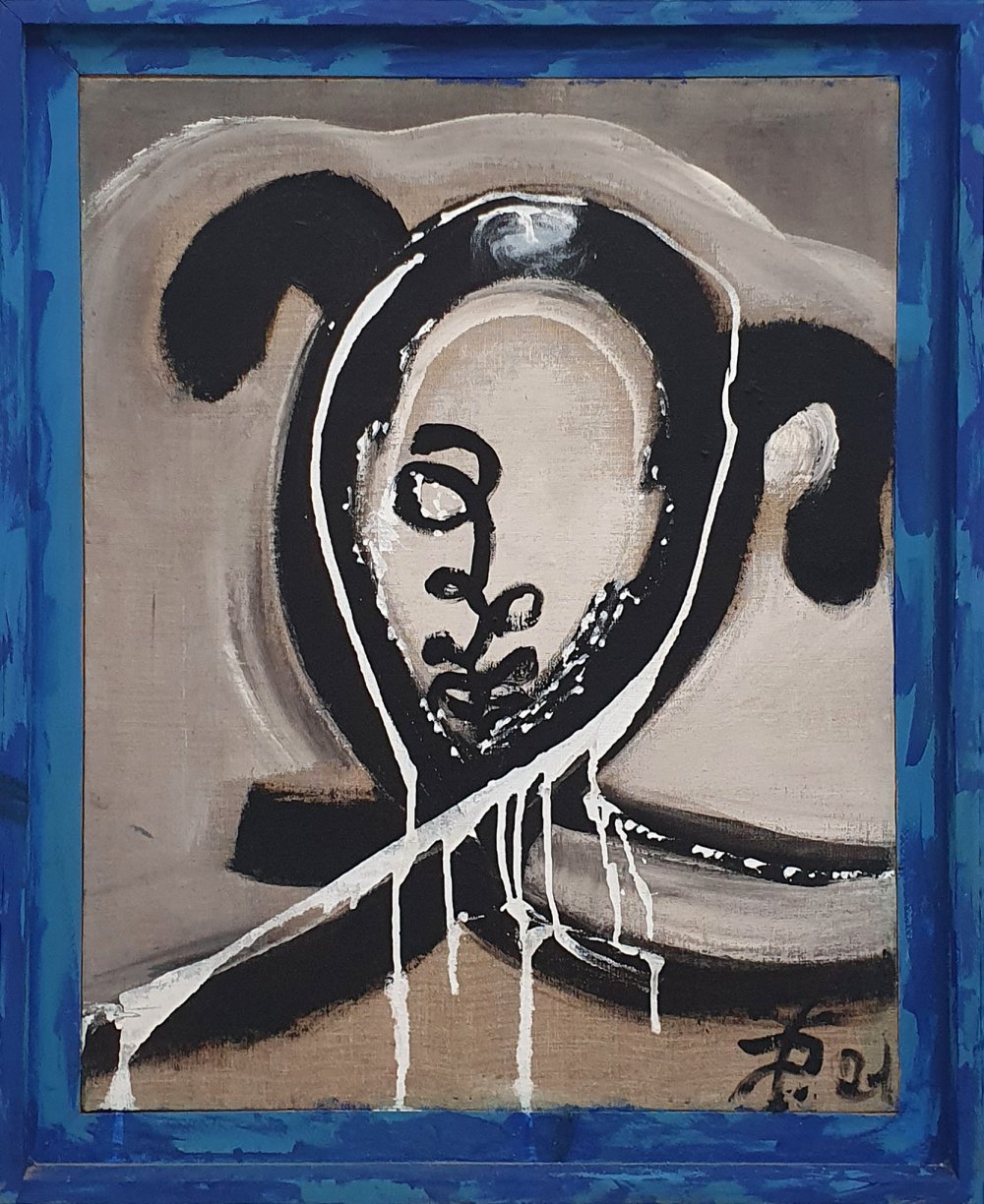 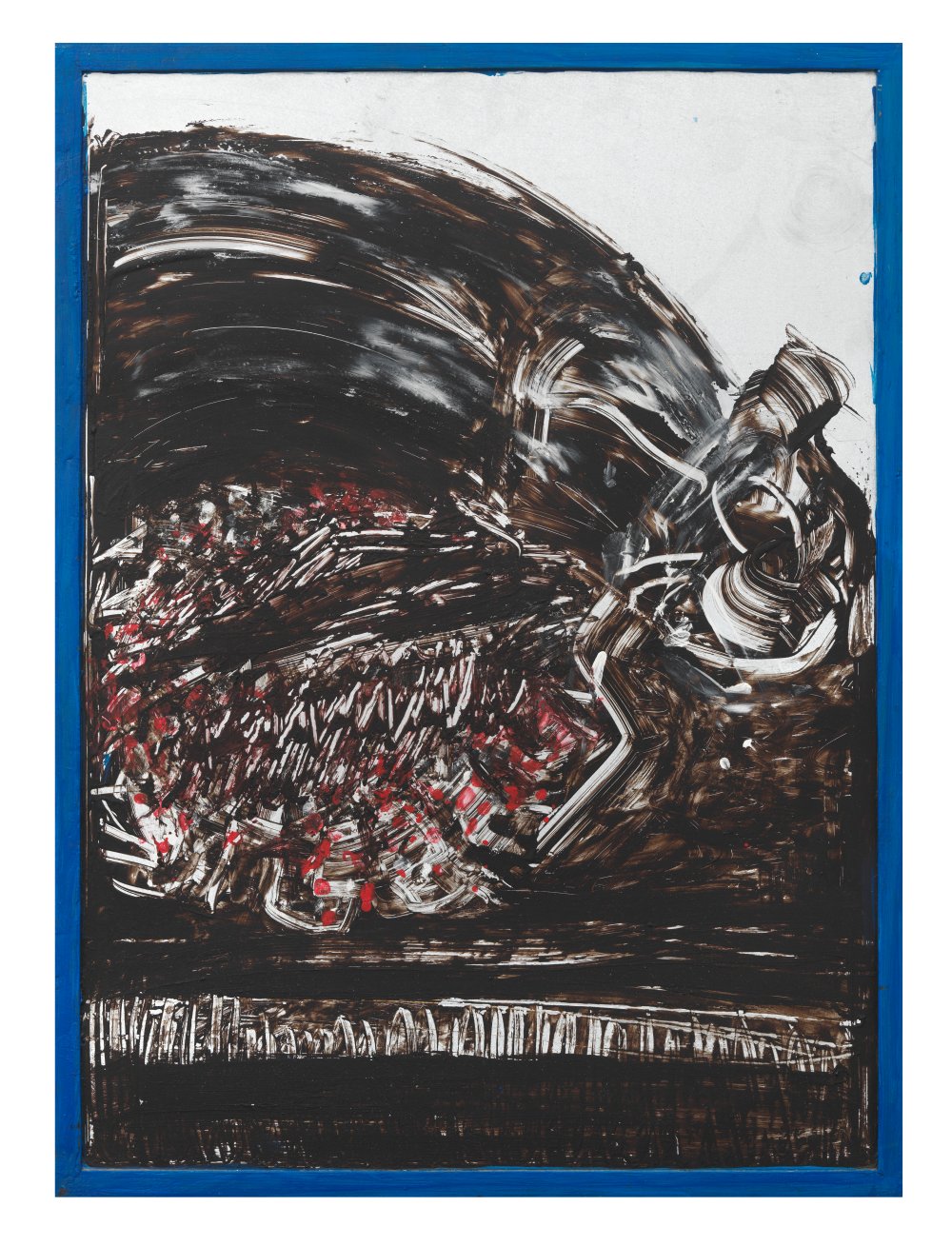 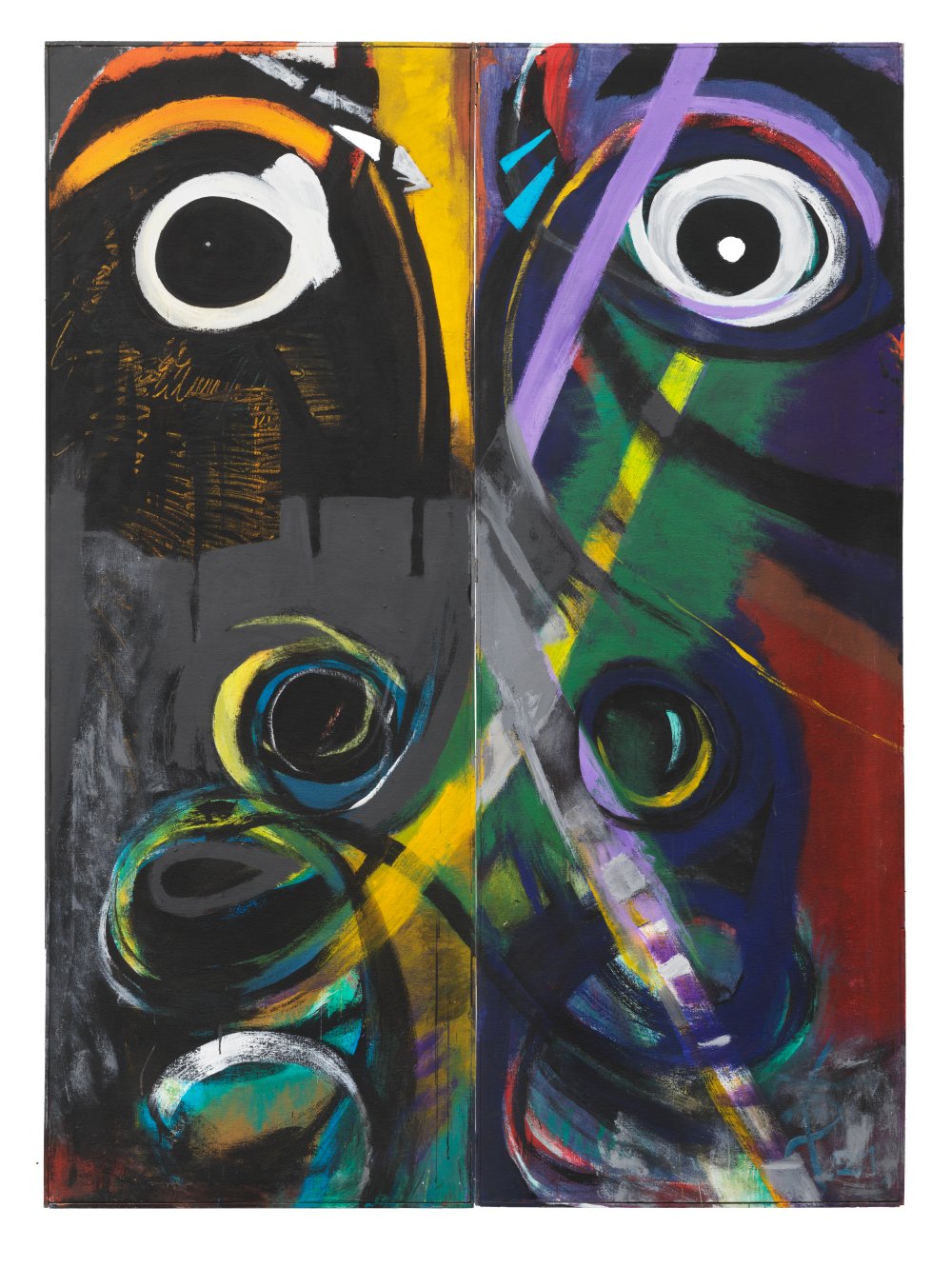 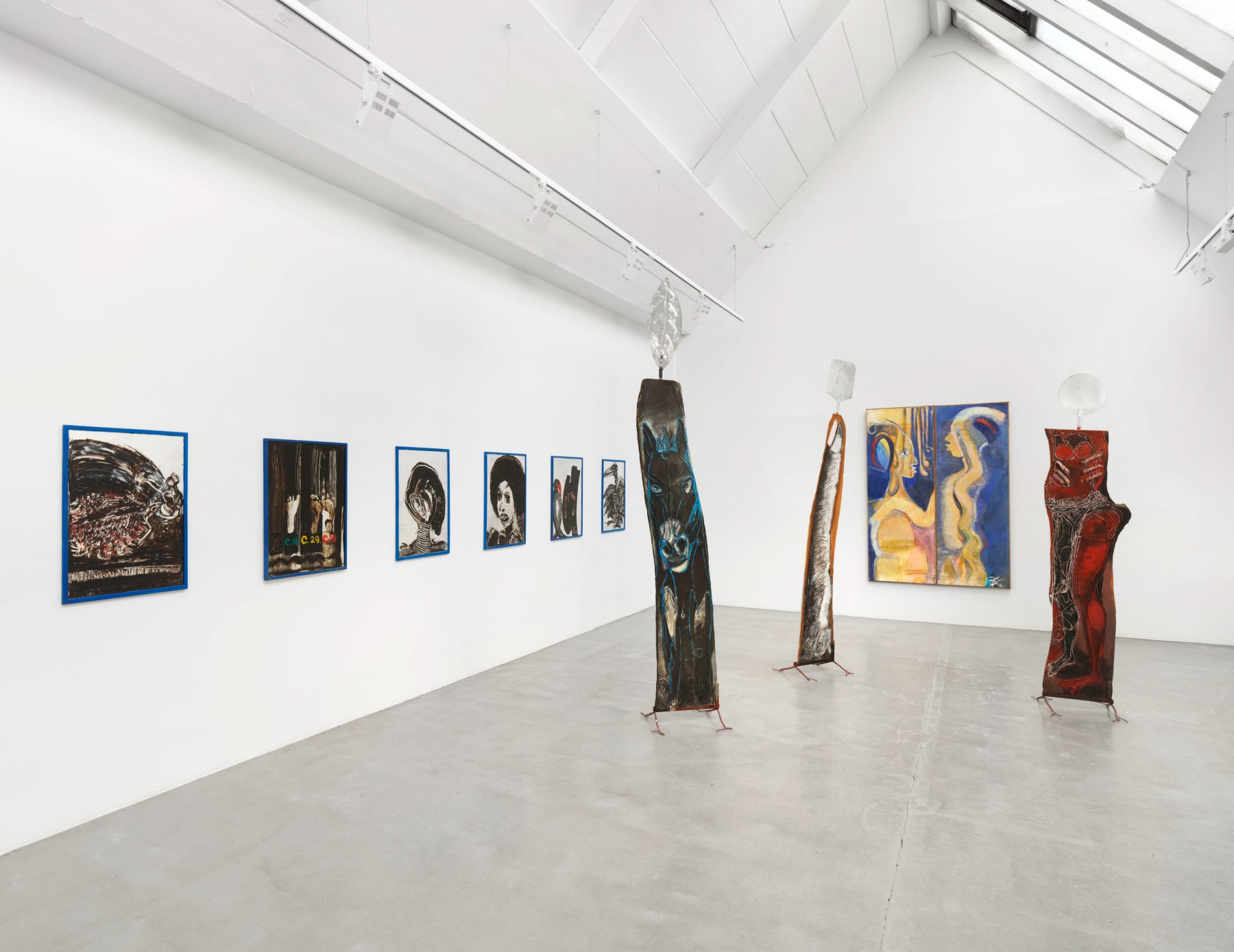 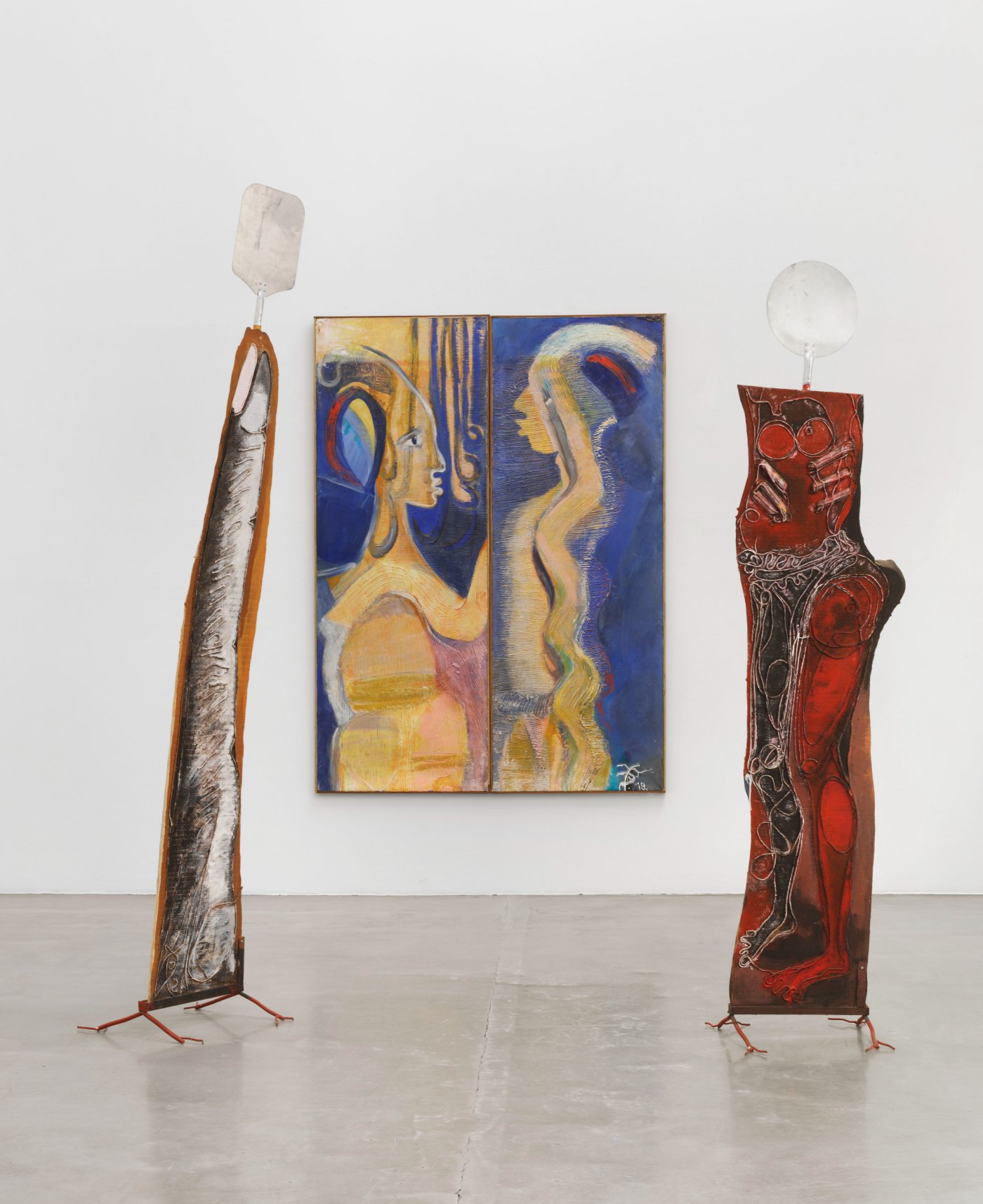 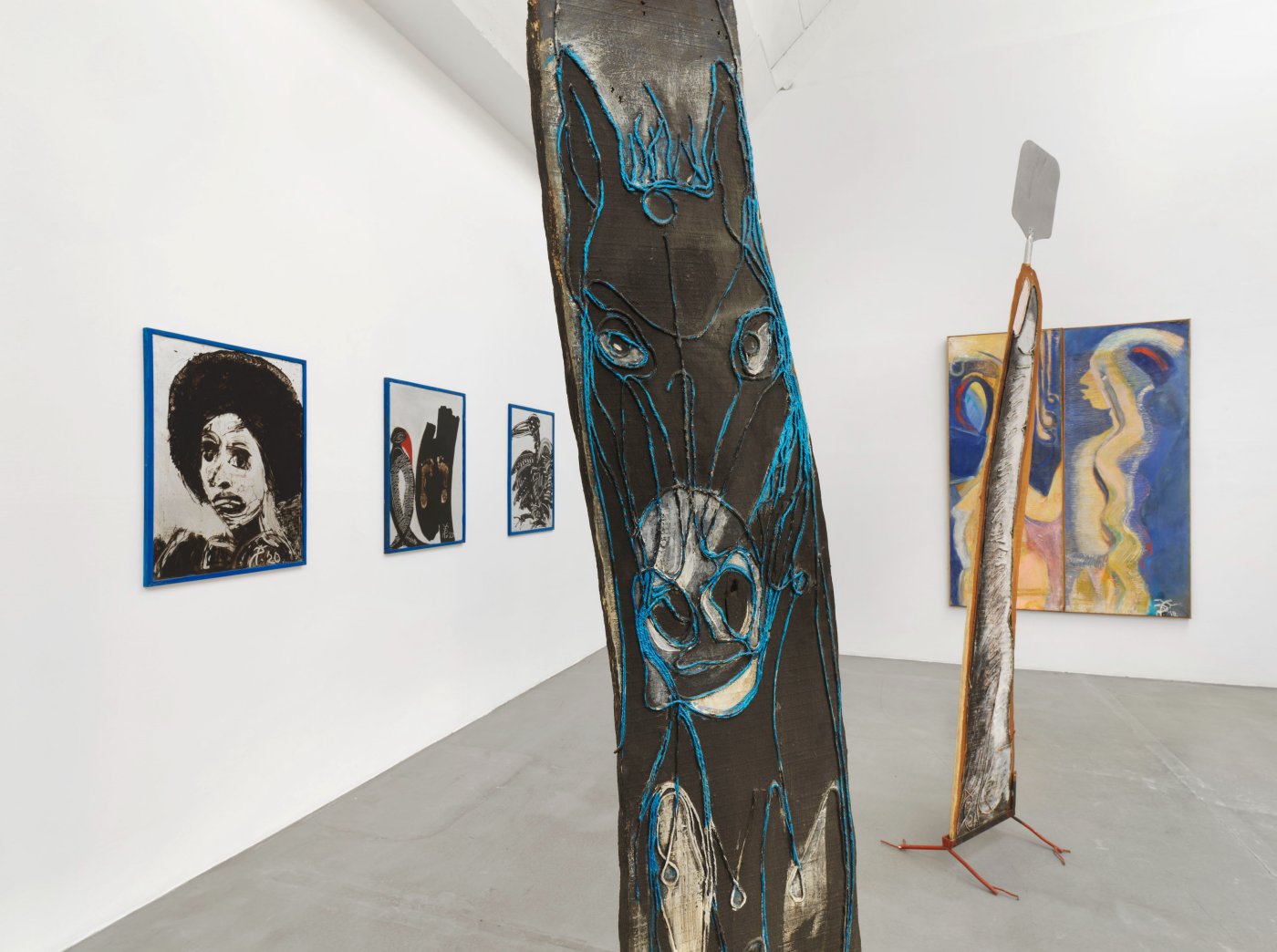 „El Hadji Sy (born in 1954 in Dakar) is an icon in the history of visual arts in Senegal. After more than fifty years of career, he is a witness to a colonised society in-transition, an important voice in the development of a new modernity. As a painter, a cultural activist and the first black curator to collaborate with a western institution in the 1980s, his social commitment and collective initiatives always aimed at an artistic autonomy“. (Jennifer Houdrouge, Selebe Yoon)

El Hadji Sy ́s oeuvre is interdisciplinary, but he is also first and foremost a painter. He studied at the Ecole Nationale des Beaux-Arts in Dakar. As an antithesis to the Negritude philosophy of Senghor and the Dakar School, El Hadji Sy developed his performative painting style. By painting with his feet, El Hadji Sy acted against received art history as if against an authoritarian father. Trampling on a canvas, inflicting thumps with naked feet on an often abstract composition of colors, became a gesture of anarchy, both against a Western painting tradition as against the invented ‘Africanness.’Since the mid-1980s, he has used jute rice sacks as a painting surface, on which he paints with various media such as oil, acrylic, tar and wax. The paintings hang on the ceiling, on the floor and on the wall.

„Silhouettes Critiques“ features new and specially created wall works, free-standing paintings and sculptures. To enter the exhibition, the viewer must literally enter the pictorial space by passing through the paintings, which are installed like revolving doors. In his exhibition, the artist-scenographer subverts the space and offers the visitor a choreography that they must circumvent and pass through in order to gain access. El Hadji Sy defies the institutional rule of „no touching“ in museums, which sanctifies the artwork and imposes a distanced and contemplative relationship on the visitor.

„El Sy’s paintings in this exhibition, and maybe some others before already, are in conversation with other images, rather than establishing an immediate relationship with a subject in reality, a spiritual being or a deity. There are no real sitters for these paintings, not even for the horse or the bird. Rather than being effigies as proxies for absent persons, they seem to me reminiscent of other images. The portraits are our plastic counterparts, not material traces of an individual or other presence, as they emphasize plasticity over fixity, offer us a radically different point of departure for understanding the status of the image. Moreover, as some of them are painted on revolving doors, their permanency is shaken. These paintings suggest to be, as with many works of El Sy in the past, to be manipulatable long after their production. There is an open-endedness to them, they are not inert, making new individual and collective identities, in new forms of spaces, of collective belonging and affiliation, but also of evasion. At the same time, there is an apparently cultivated nonchalance in the painterly execution, a testimony of a fight against oneself, against one’s education, exorcising lingering aspects of the Ecole de Dakar aesthetics and its ghosts. The gestural is an important aspect of El Hadji Sy’s work, but his painterly concerns are prompted by a ‘performative’ approach to expression. In his own words, when painting he ‘enters the pictorial fact’, less as an author than as a corporeal participant, extending painting beyond the sphere of the visual. What El Sy seems to advance here and in many other instances when he shows his work, or ‘works’ with his work, is the embodied, sensory nature of image perception, bringing about an effect of fluidity in terms of a body/ world boundary. Bodies and faces appear and disappear by and through the gestural arabesques painted or laid out by cord. The intertwined flowing lines, also reminiscent of ancient Islamic art, endow the paintings with a certain type of agency, which is mirrored by the agency of the audience attempting to perceive a representation in a pleasurable frustration. These paintings as agents with social lives of their own, come in families, in lineages, tribes, populations, just like people, and invite us in a seductive and at the same time apotropaic dance, in which we, the audience, just like any evil spirit become stuck in the coils of the composition.“ (Philippe Pirotte)

„From the beginning of his career, El Hadji Sy was committed to the development of autonomous infrastructures for artists living in Senegal. He founded studio complexes such as the first Village Des Arts (1977-1983), from which the artists were eventually evicted, and a second in 1996 in a former Chinese workers‘ camp – today‘s Village Des Arts. While the controversial exhibition „Primitivism in the 20th Century“ opened at MoMA in 1984, El Hadji Sy conceived a collection of contemporary Senegalese art for the Weltkulturen Museum in Frankfurt in the same year – a pioneering work that shortly thereafter resulted in the first anthology of contemporary Senegalese visual art. El Hadji Sy co-edited this anthology, to which Leopold Sedar Senghor wrote the foreword. In his quest to write a non-Western and modern history, he was invited by curator Clementine Déliss to co-curate the exhibition „Seven Stories about Modern Art in Africa“ at the Whitechapel Gallery in London during Africa95 in 1995. In 2005, he presented the comprehensive retrospective entitled Painting, Performance, Politics, curated by Clementine Déliss, Yvette Mutumba and Philippe Pirotte at the Weltkulturen Museum Frankfurt, which in 2015 placed his work in dialogue with objects from the museum‘s ethnographic collection. His work has been shown at the IFAN Museum of African Arts Dakar, the 31st Sao Paolo Biennale (2015), the U-Jazdowski Castle Centre for Contemporary Art, Warsaw (2016) and Documenta 14 (2017).“ (Jennifer Houdrouge, Selebe Yoon)

The gallery exhibition follows a first collaboration in 2021 for the online platform New Viewings, entitled „Delirium“, curated by Clementine Deliss. Coinciding with “Silhouettes Critiques”, new works by El Hadji Sy will be shown at Selebe Yoon Gallery in the exhibition titled „Now/ Naaw“, (19 May – 30 July 2022), as well as in a solo presentation at the Dakar Biennale, curated by Papa Massamba Mbaye , (22 May – 30 June 2022 ).