Edward Allington & Nika Neelova: One of Many Fragments

Edward Allington & Nika Neelova: One of Many Fragments

The New Art Centre presents One of Many Fragments – an exhibition of work by Edward Allington and his former student at Slade School of Fine Art in London, Nika Neelova. Inspired by architectural details and artefacts, both artists reimagine objects and visual qualities that have been so commonly used they are now overlooked. Where Allington plays with the replication of classical designs and motifs, Neelova repurposes materials to create new forms. 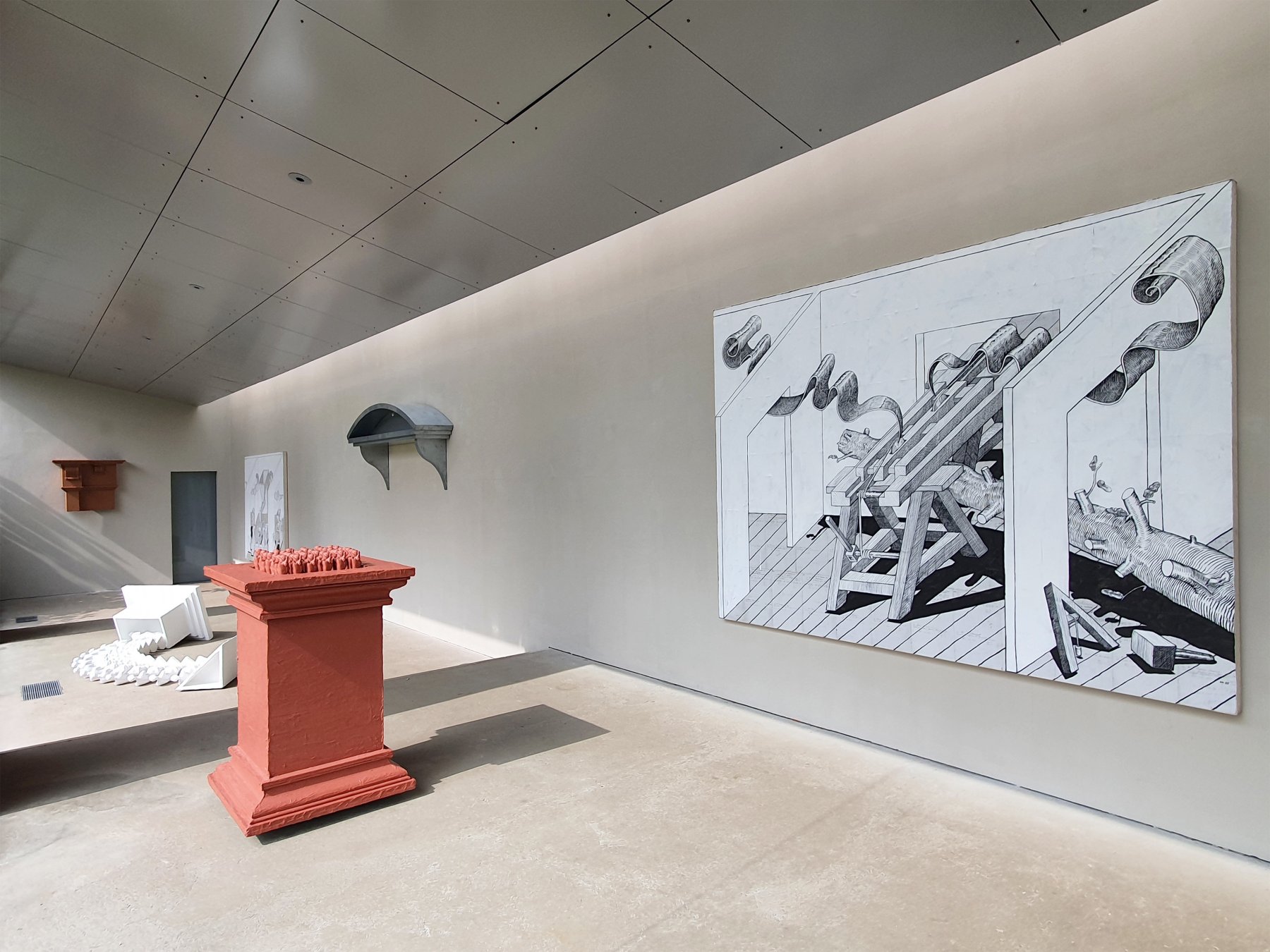 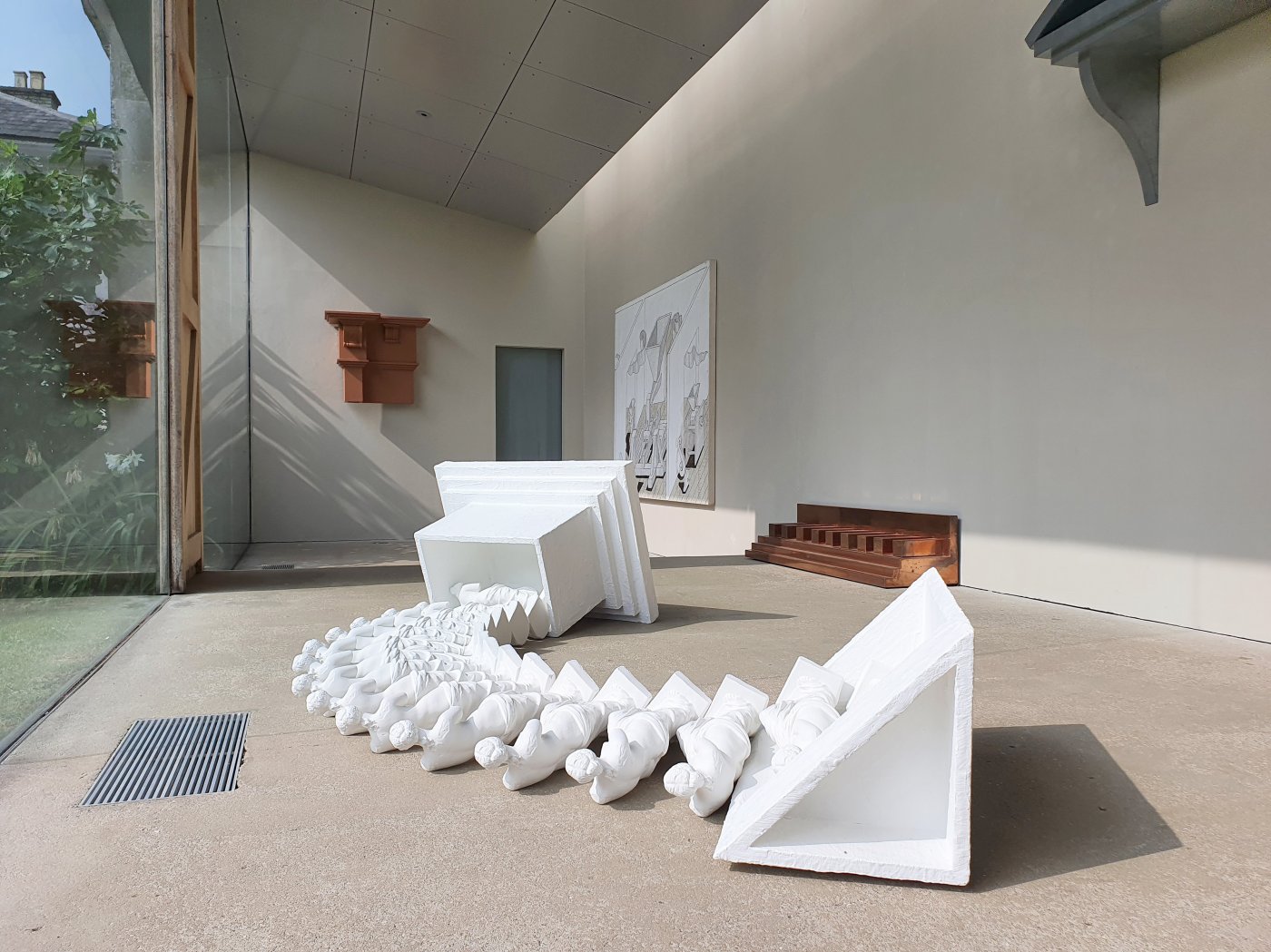 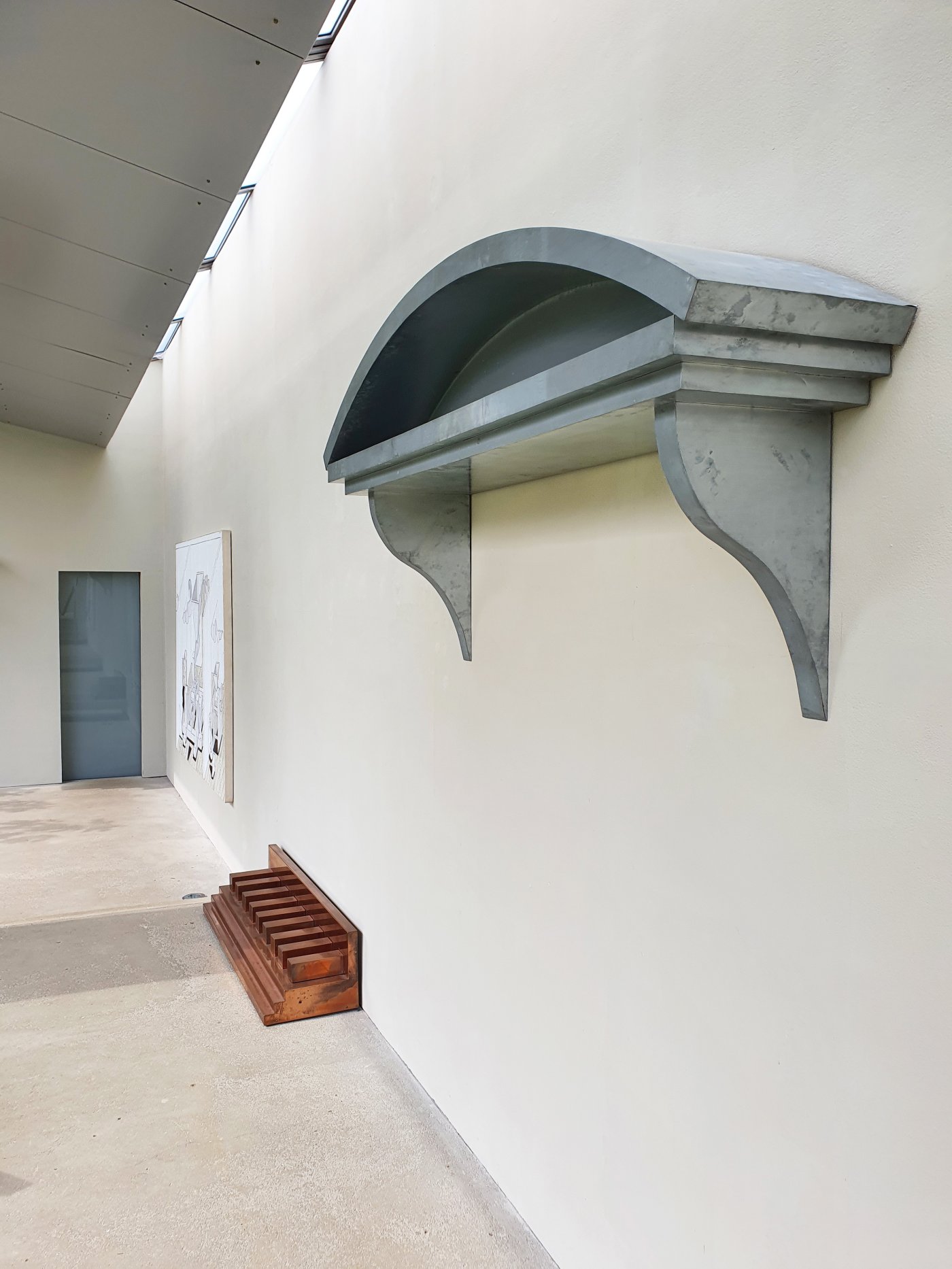 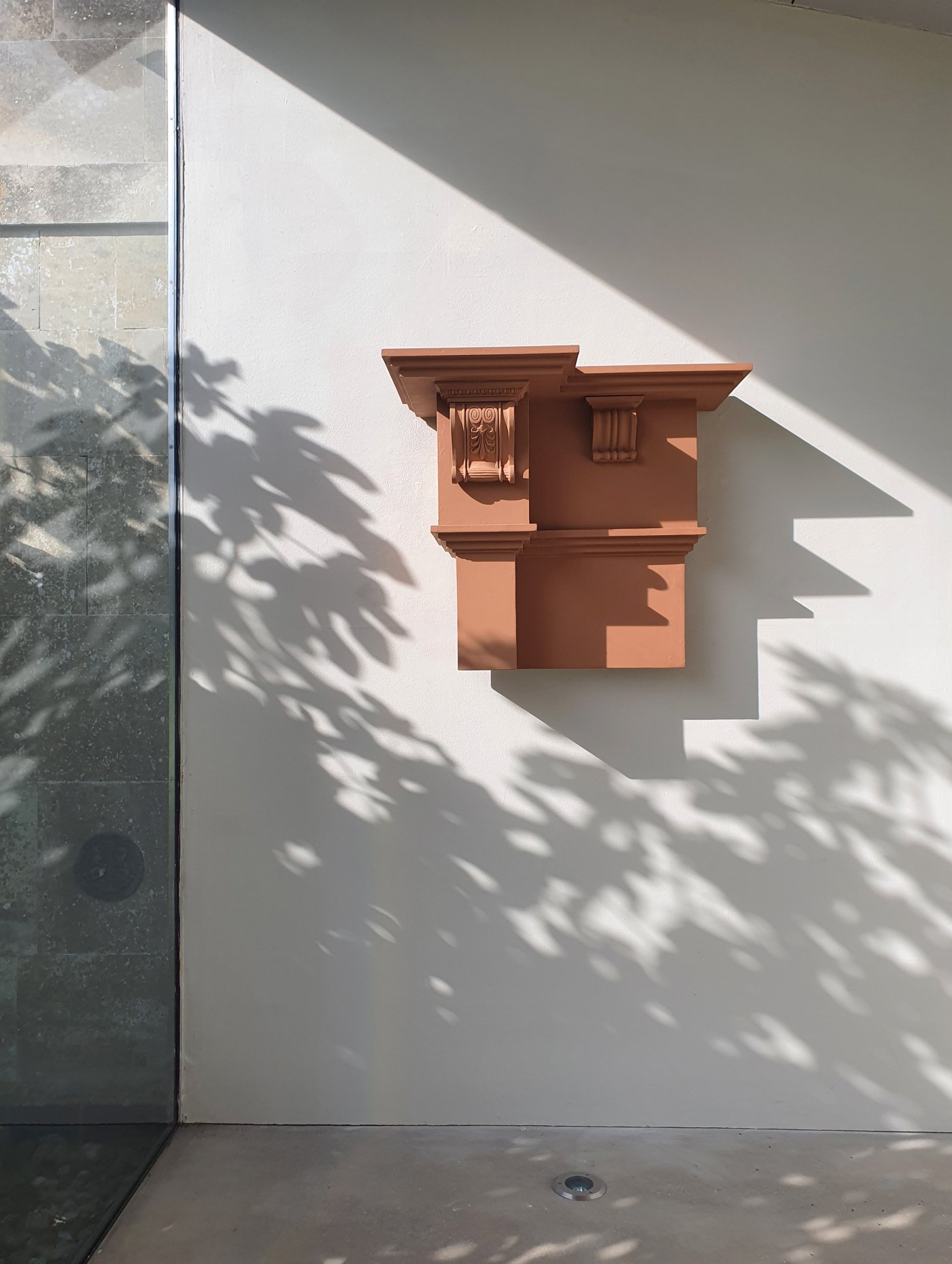 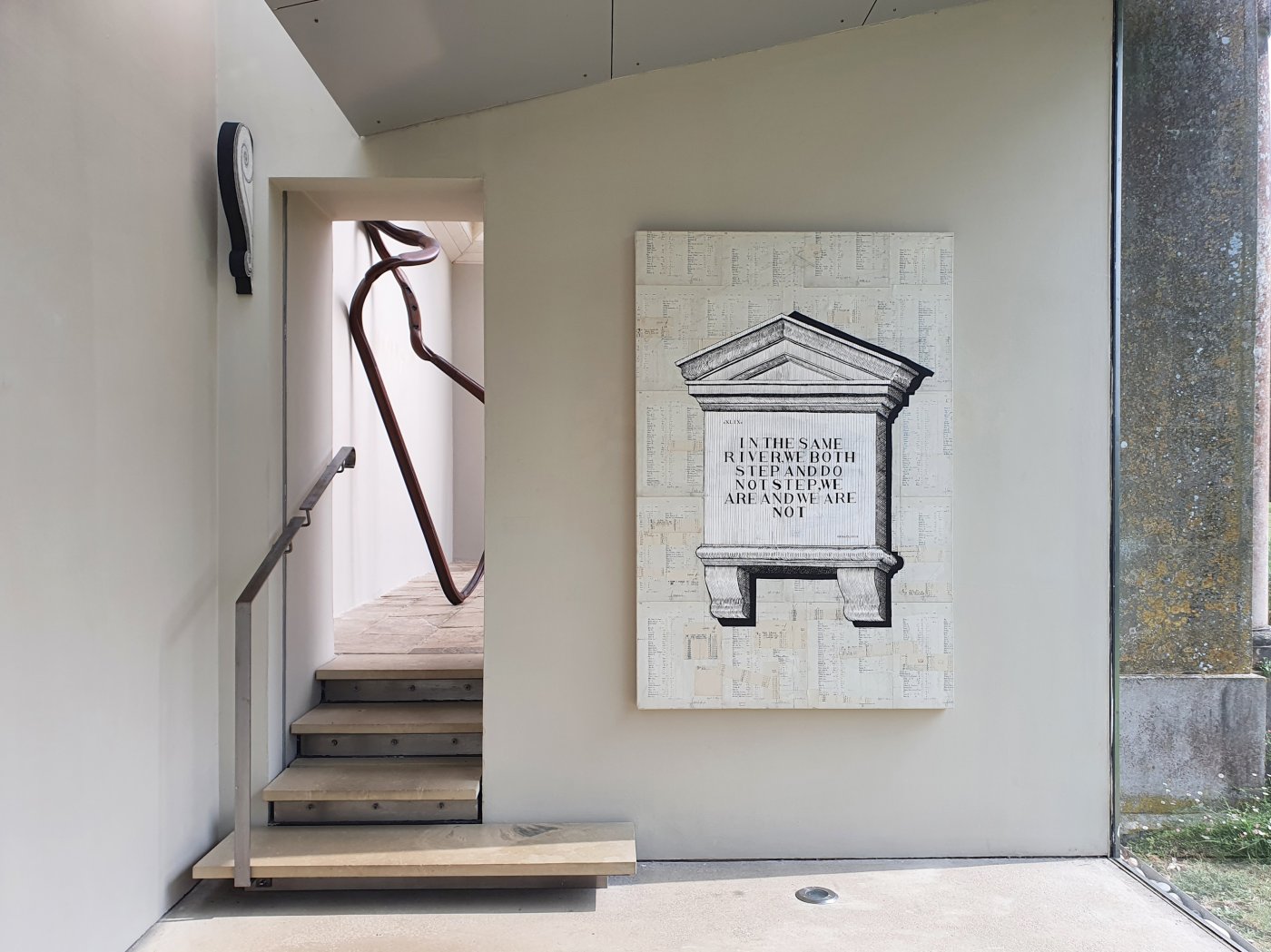 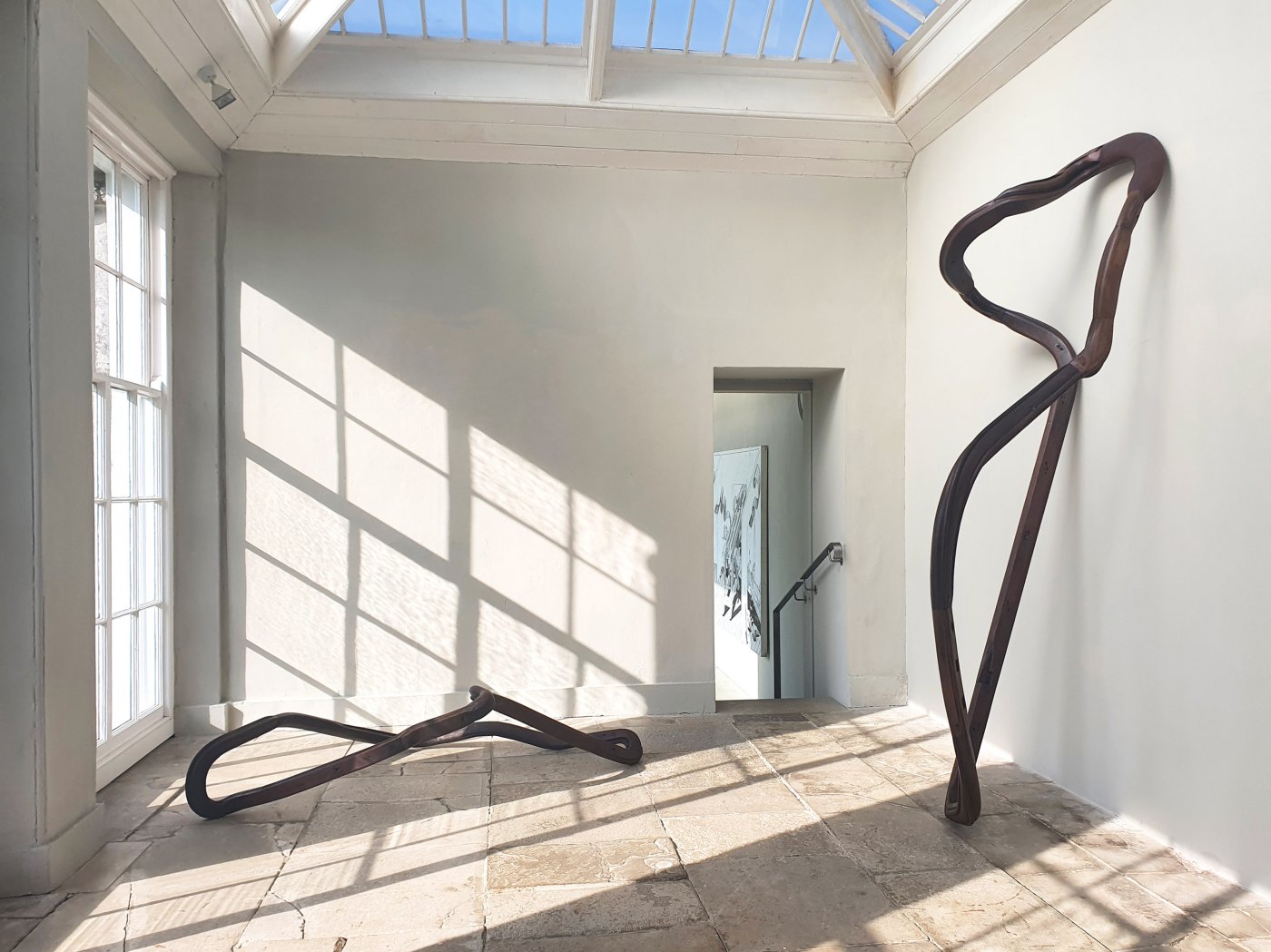 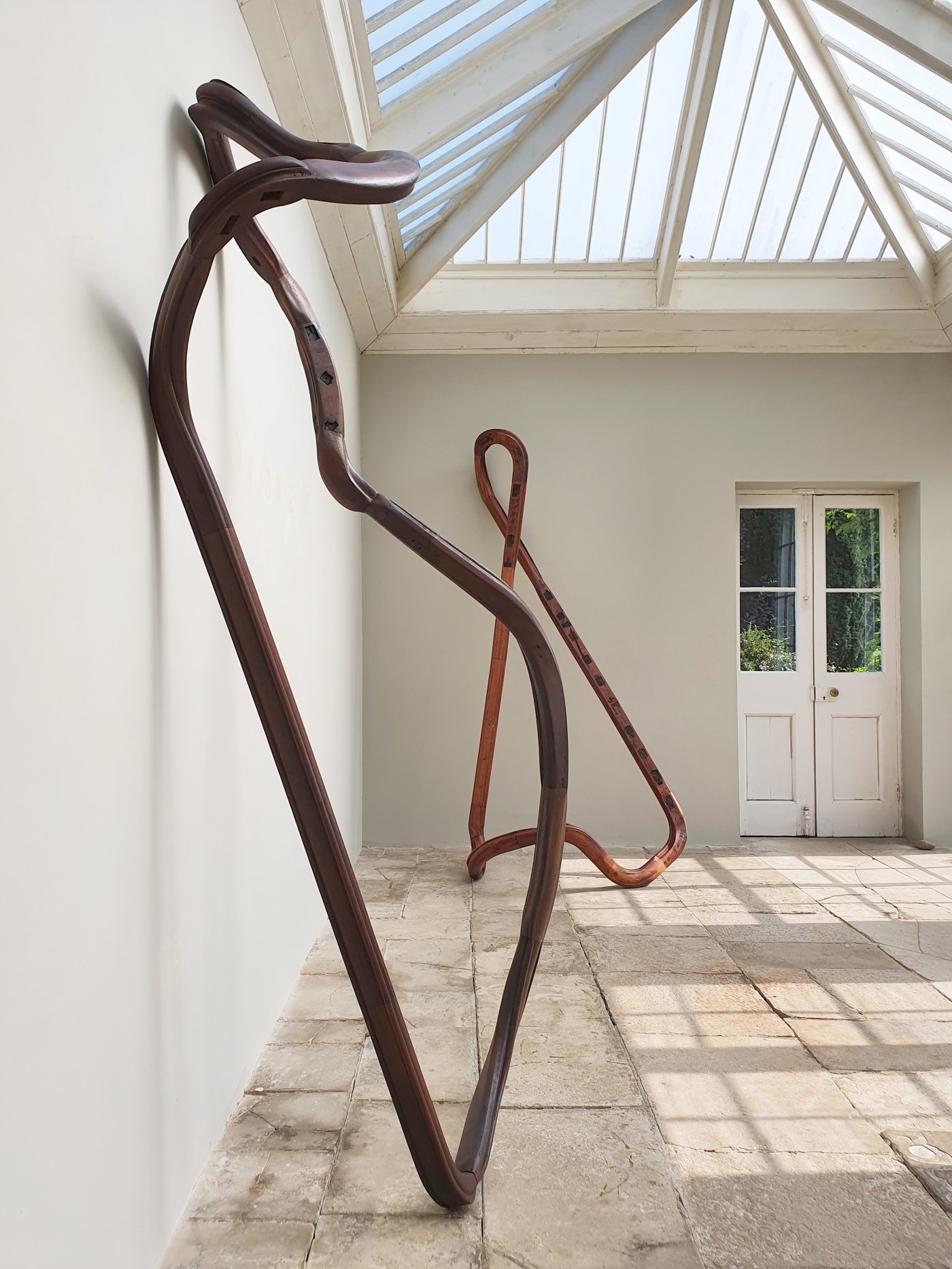 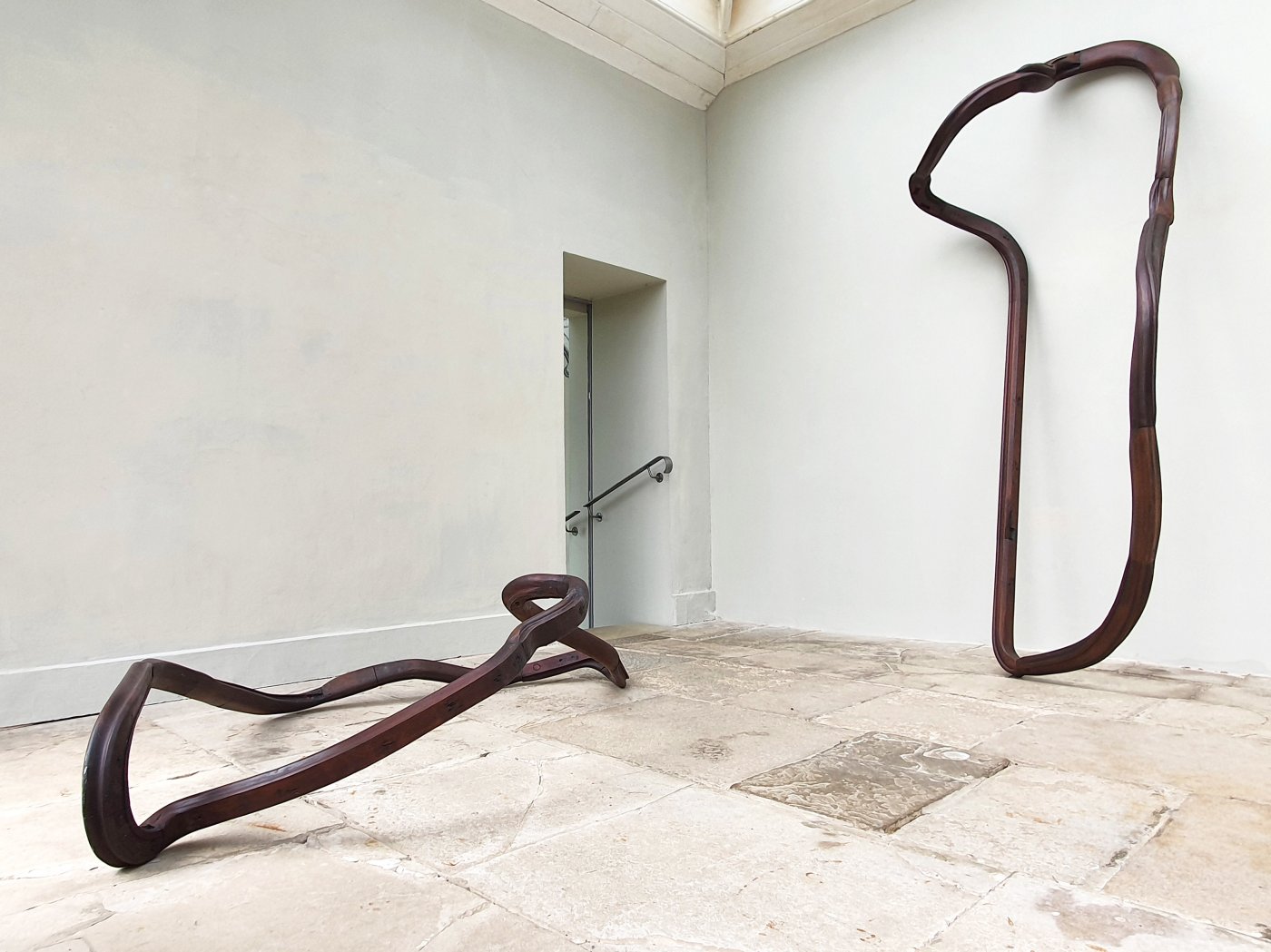 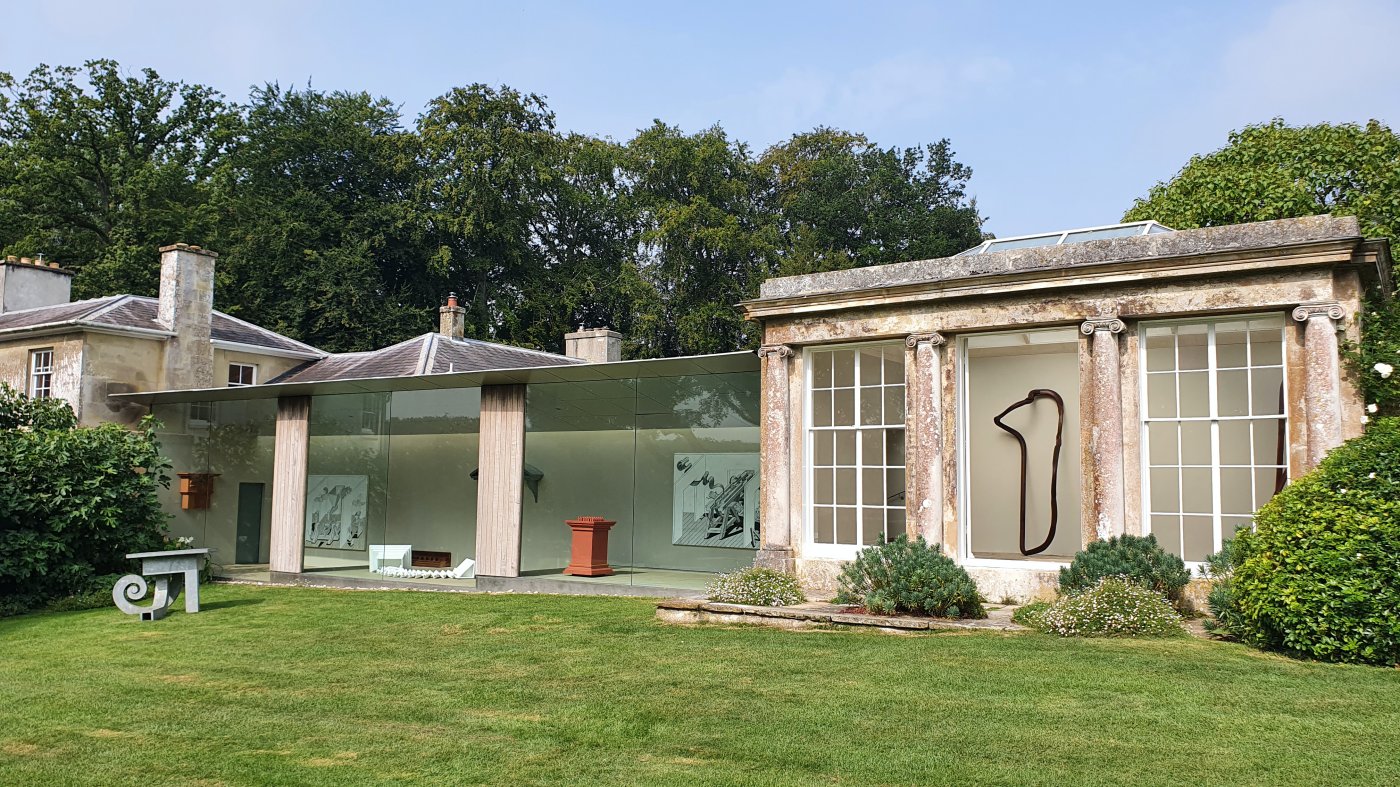 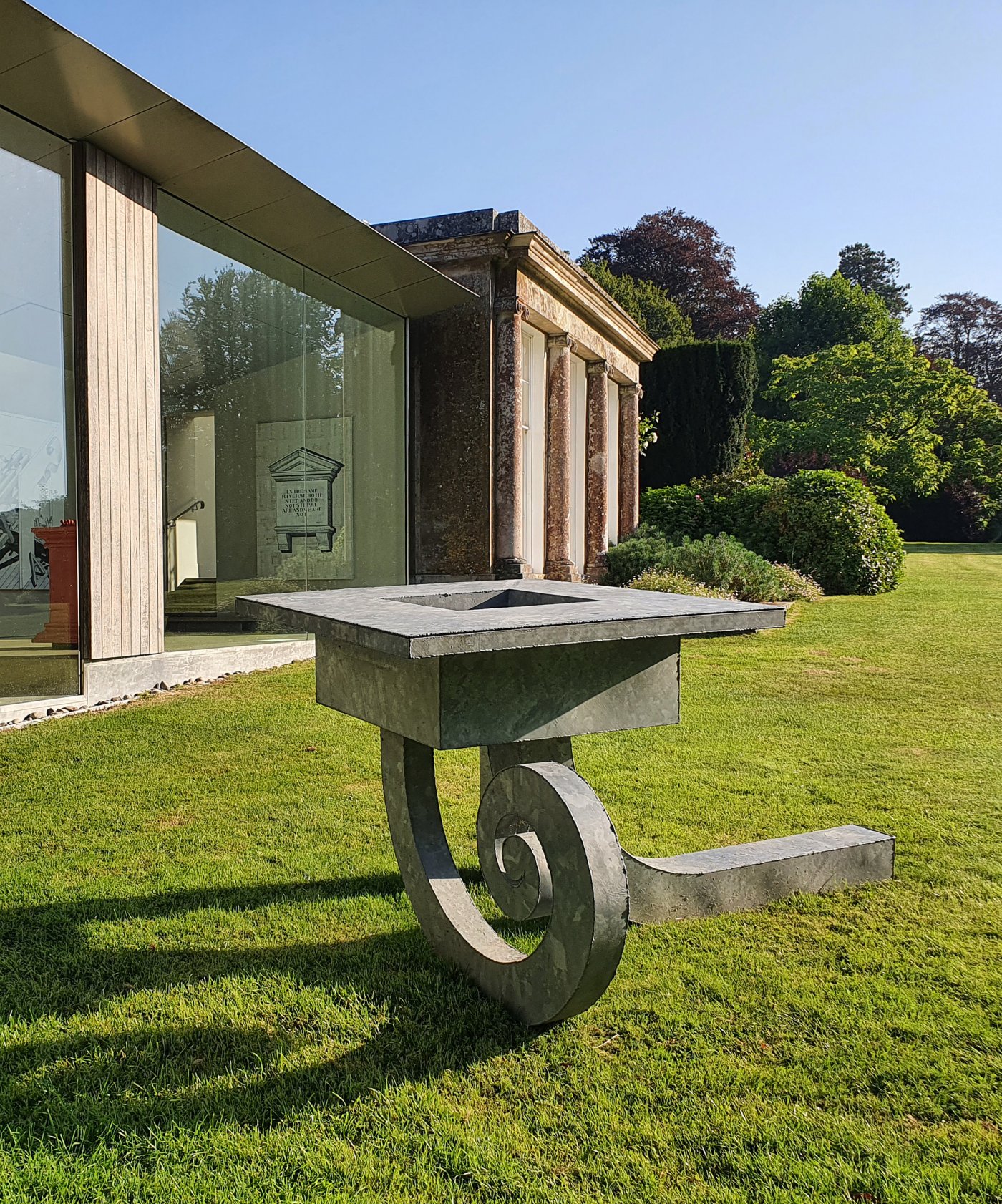 Edward Allington (1951 – 2017) is known for his experimental approach to sculpture and was a central figure in the ‘New British Sculpture’ movement of the 1980s, alongside contemporaries such as Antony Gormley and Richard Deacon. His work is characterised by the stylistic influences of classical architectural forms and his sculpture often features fragments of columns, pediments and cornices with classical embellishments. These details highlight Allington’s interest in how these forms have found expression through the ages and remain ever present in contemporary culture. He also addresses themes of reproduction, mimicry and authenticity.

In our glass-fronted gallery the eponymous work, One of Many Fragments, a classically-infused wall piece sits alongside his other freestanding sculpture. Made from wood and plaster, and then painted, materially-speaking the work does not hold any physical legacy of the architecture of antiquity. Yet, with its cornice and scroll-like designs the influences and inspiration of this period are palpable. It is this clash of materials and style that hints at Allington’s interest in what it means to (re)produce sculpture and the extent to which we can consider this authentic. These indoor sculptures are shown with examples of outdoor works, alongside his drawings that similarly speak to an interest in architectural space, structure and detail.

Edward Allington (1951-2017) was born in Cumbria and studied at Lancaster College of Art (1968-71) before going to Central School of Art and Design (1971-74) and then the Royal College of Art (1983-84). Selected for the renowned Objects and Sculpture exhibition at the ICA and Arnolfini in 1981, and for The Sculpture Show at the Hayward Gallery in 1983, Allington first received national recognition in the early 1980s. He was championed by critics and curators as one of the sculptural object makers of the ‘New British Sculpture’ movement, comprising artists such as Anish Kapoor, Antony Gormley, Bill Woodrow, Tony Cragg, Richard Deacon, Kate Blacker, Jean-Luc Vilmouth, Richard Wentworth, Shirazeh Houshiary and Alison Wilding. He was also awarded the John Moores Liverpool Exhibition Prize in 1989, became Gregory Fellow in Sculpture at University of Leeds 1991–1993 and then Research Fellow in Sculpture at Manchester Metropolitan University in 1993. His open and experimental approach to sculpture saw him become Professor of Sculpture at the Slade School of Fine Art in 2006.

Recent exhibitions of Allington’s work include Things Unsaid, a solo presentation that took place at the Henry Moore Institute, Leeds in 2019. Allington’s sculpture, alongside work by Pablo Bronstein, is currently on view at Tate Britain, London until 31 October 2021.

Nika Neelova (b.1987, Russia) presents her sculpture in our nineteenth-century Orangery. These new works are comprised exclusively of reclaimed bannisters, extracted from historic buildings and reconstructed into undulating, continuous forms. The title of this series of works – ‘Lemniscates’ – is significant; it is a mathematical term for the infinity loop and speaks of the cyclical, seemingly infinite trajectory of materials in her practice. Though repurposed, Neelova makes a serious attempt to maintain the authenticity of the wood by leaving the surfaces of the bannisters untreated, ensuring the patina of time – that bears traces of each hand that has run itself down the surface of the object – remains present. The historic Orangery makes for an auspicious space in which an active dialogue with these ‘Lemniscates’ can take place.

Both Allington and Neelova’s sculpture explore the power of the medium to affect place as much as to be affected by it. Speaking about Allington’s work in 2003 in his book, Edward Allington Site Projects, curator Tony Godfrey wrote:

The same applies to Neelova’s practice. This quality of challenging sculptural categories, playing with the stylistic and material legacy of architecture, and confronting scale is shared by both artists.

Nika Neelova (b. 1987) was born in Moscow and she currently works and lives in London, UK. She studied at the Royal Academy in the Hague and the Slade School of Fine Art in London, where Allington was her tutor. She has been awarded several renowned prizes including the Kenneth Armitage Young Sculptor Prize (2010), the Saatchi Gallery New Sensations Award, (2010), the Land Security Prize Award (2011) and the Royal British Society of Sculptors Bursary Award (2012). Recent solo exhibitions include ‘She Sees the Shadows’ curated by Olivia Leahy and Adam Carr for DRAF & Mostyn (2018). ‘EVER’ at The Tetley, Leeds, UK (2019) and ‘Glyphs’ curated by Domenico de Chirico at Noire Gallery, Turin, Italy (2019). Selected group shows include ‘Seventeen. The Age of Nymphs’ curated by Daria Khan at Mimosa House London (2019) and ‘Silence is so accurate’ at Geukens de Vil Antwerp (2020). Neelova has an upcoming solo show ‘SILT’ at Brighton CCA, due to open on October 15 2021.

Courtesy of the artists and New Art Centre, Salisbury