Roberts Projects presents The Spring Cycle, an exhibition of new paintings, drawings and photographs by Ed Templeton that are a direct response to the suburban environment he lives in. These new works create hyperbolic realities that scrutinize the human condition through the lens of urban isolation. 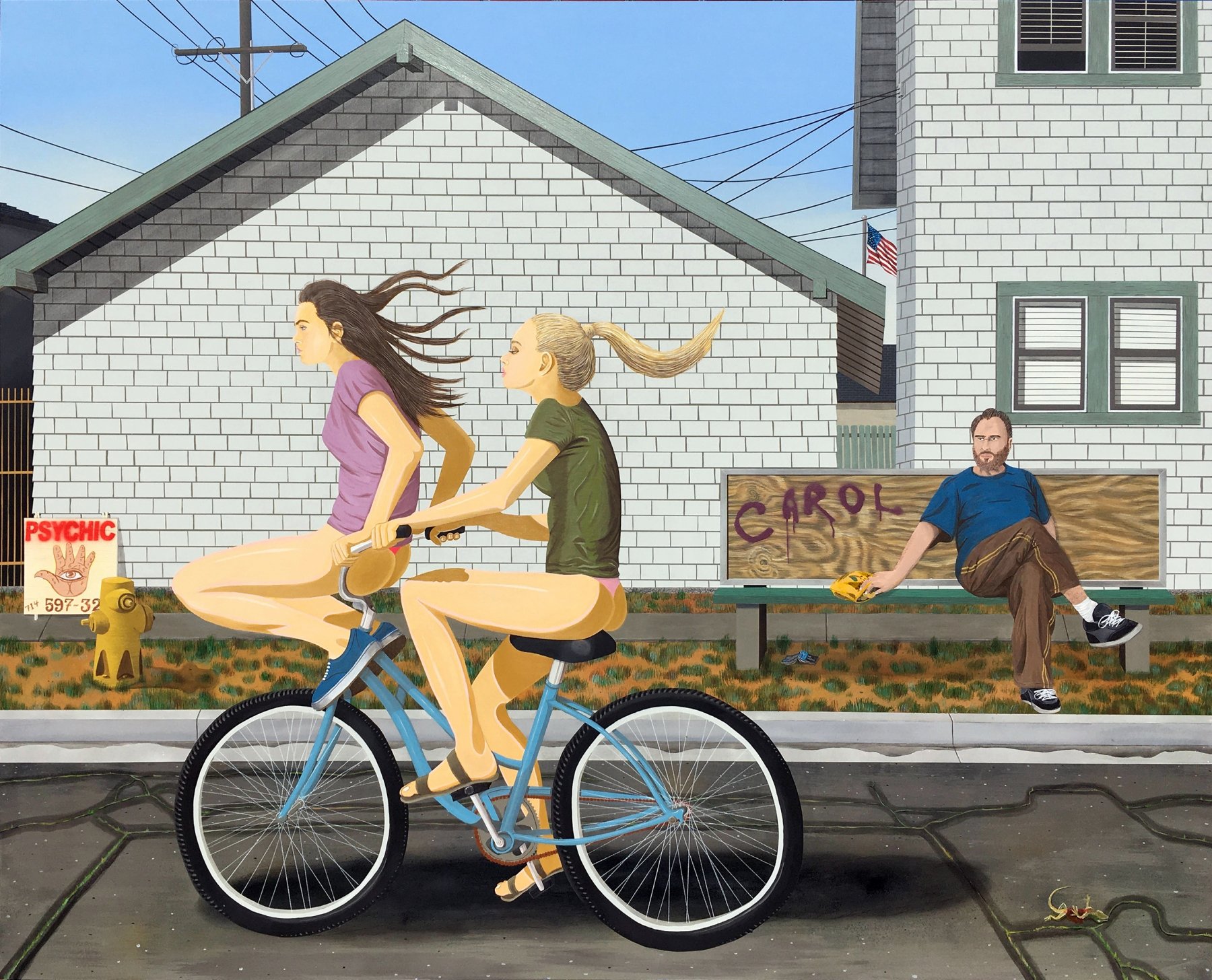 Templeton’s most concise works to date continue earlier themes cynical of the provincial customs and rituals of his surroundings, notably the ever-polarizing political milieu over the last five years in Orange County where he lives and works. Suggestive imagery and unsettling portraits are joined with idyllic landscapes that verge on the pastoral to explore fragmented or at times distorted experiences with sensitivity and specificity. Details such as discarded religious pamphlets or signs, highlight how belief systems, however absurd, permeate our lives. The lack of specific environmental factors further highlights the enigmatic nature of each scene. Boundaries between what is public and private are blurred. Proxemics between people have no clear delineation, so relationships are not easily determined at first glance, if at all. The disdain is incandescent.

The linear compositions of the large-scale paintings epitomize the West Coast’s horizontal configurations, while smaller works evoke a more intimate quality. Templeton again employs a realistic style that has defined his painting practice; however, these new works see a lack of fantastical elements and the introduction of deep-set shadows, a divergence from his normally hyper-saturated palette. The realistic, straightforward suburban scenes are not unlike, in both sensibility and style, the mundane photographs of Ed Ruscha’s book Twentysix Gasoline Stations (1963). Also on view are works on paper and the artist’s original photographs, both of which provide considerable insight into the paintings.

In Templeton’s world, young adults, and teens struggle to adapt to the banality of their parents’ structured, homogenous world. Per the artist, “I found punk music and skateboarding which altered my worldview and disappointed my grandfather. I then married a mixed-race woman, whose father was from Mexico. I was eager to escape this provincial region, but through twists of fate ended up staying here and planting roots among the endless blocks of tract housing.” Spring’s cycle of change, with its energy of transformation, provides a welcome escape.

Ed Templeton (b.1972, Garden Grove, CA; based in Huntington Beach, CA) is known for his interdisciplinary practice, most notably of photographs documenting people and street life locally and globally, intimate portraits of his wife, and paintings depicting the psychological complexity of American suburbia. He first gained recognition as a teenage skateboard prodigy in the late 1980s, becoming a professional skateboarder and beginning to paint in 1990. While touring the world for competitions in 1994, he picked up photography to document the incredible skate-culture he was taking part in. That same year he founded a skateboard company Toy Machine and incorporated his artwork and graphics onto skateboard decks and advertisements.

Templeton uses photography, archival materials, painting and drawing to explore the ugliness, banality and beauty of the familiar everyday world, oftentimes attaching a deep, subjective emotional expression to his portraits. As the artist explains, all of his subjects come from his own life: “Everything I’ve ever shot has just been on the path that I’ve been on, be it skating or travel or street photography.” The environmental scenes created by Templeton are as much within the genre of portraiture as they are landscapes, neatly framing and supporting our perceptions of the bodily movements, ambiguities, and our relations with the characters embodied within.

In addition to his studio practice, Templeton has published over thirty titles to date, including the infamous Teenage Smokers, and he continues to self-publish and distribute zines and artist books. Templeton is also a co-editor of ANP Quarterly, an arts magazine started in 2005. Templeton’s upcoming book 87 Drawings by Ed Templeton will be released February 2022 via Nazraeli Press. A limited number of copies will be available for purchase at the gallery.