I want the work to be indefinable, haunting, and primordial. – Ed Moses

My art is more of an attempt to harmoniously blend Eastern and Western elements and artistic media together than to limit myself and select one technique over another. – Qin Feng

Blain|Southern presents an exhibition that places the work of Ed Moses (1926-2018, Long Beach, California) and Qin Feng (1961, Xinjiang, China) in a conversation across cultures, conducted in a shared artistic language. 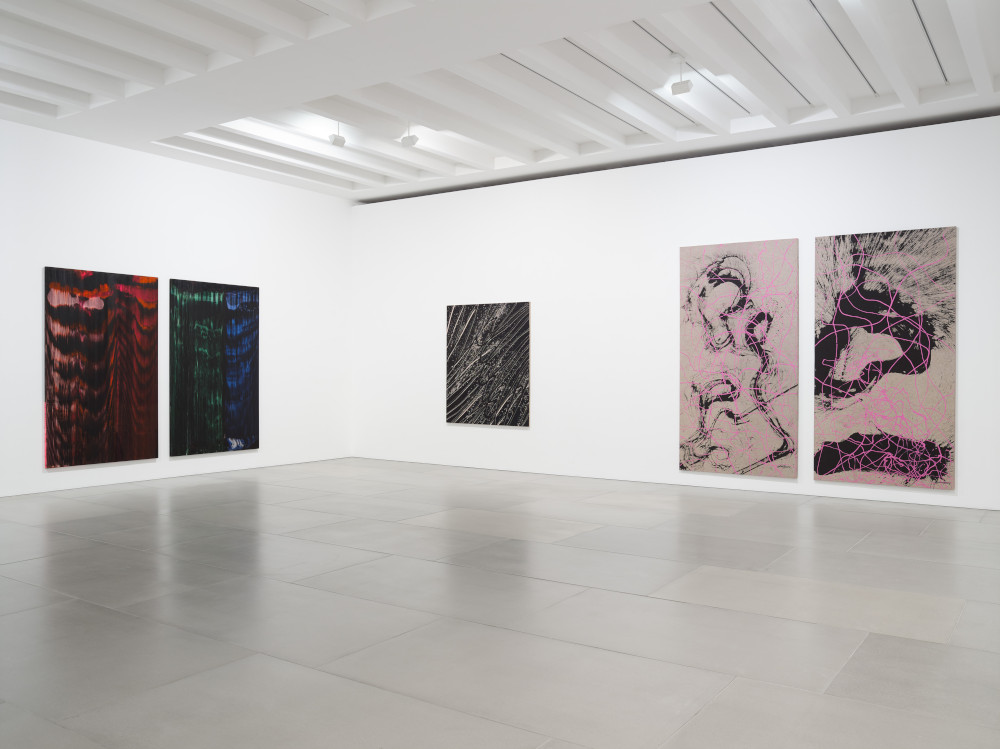 Ed Moses and Qin Feng make dynamic, gestural paintings influenced by both Eastern calligraphy and Western abstraction, yet each artist arrived at this common ground from different directions. Moses was one of the founding artists of the Ferus Gallery, Los Angeles (alongside the likes of Robert Irwin, Ed Ruscha, and Ed Kienholz), and over many decades he created one of the most diverse bodies of abstraction in late twentieth-century American art. As with many American artists of the post-war generation, especially on the West Coast, Moses was attracted to Buddhist thought, and he became a practitioner in the early 1970s.

While Qin Feng, one of the key figures of China’s avant-garde art movement and founder of MOCA Beijing, has over the past thirty years developed an expansive mode of painting that is deeply rooted in traditional Chinese calligraphy, Western art has always been an important stimulus, not least the work of Robert Motherwell, himself influenced by Chinese ink paintings. Qin Feng and Ed Moses share an interest in the relationship between the artist’s body and painterly gesture, and especially the effects of chance and spontaneity in the painting process.

Another idea important to both artists is inaction, or ‘acting by not acting’, expressed by the Taoist concept Wú Wei, which creates a space of stillness, or void, in the painting – and the mind of the viewer. The juxtaposition of Qin Feng and Ed Moses creates a dialogue, highlighting important crosscurrents of influence in late twentieth-century and contemporary abstraction.

In 1971 Moses attended a Buddhist seminary for three months and attended lectures by Chogyam Trungpa, Rinpoche. John Yau, in his essay for his retrospective at MOCA, Los Angeles (1996) wrote that Buddhism allowed Moses to conceive of his work as a paradox: ‘The painting is both illusory and physical, both changing image and solid paint.’ Yau’s insight could apply equally to the work of Qin Feng. Both artists create paintings that greet the viewer with vigorous, flowing pigment that reflects the rhythms of the artist’s hand and body. In a work such as In Space What’s Up (1988), by Moses, there are calligraphic ‘worms’ of black and grey pigment that dance with an extraordinary life force, as if the marks painted themselves. Similarly, in Qin Feng’s Desire Scenery Series – N.9 (2014) the viewer encounters energetic bursts of black pigment laced with strings of red, as if two opposing forces cling to each other in a delicate balance. In both paintings, the kinetic energy of the body and the unpredictable pigment stills itself into an image, preserved for the viewer as a graceful object of contemplation.