Franklin Parrasch Gallery presents Echo’s in Talavera, an exhibition of new work by Rafael Delacruz (b. 1989, San Francisco, CA) in conversation with ceramic sculpture and works on paper by Ken Price (1935-2012). 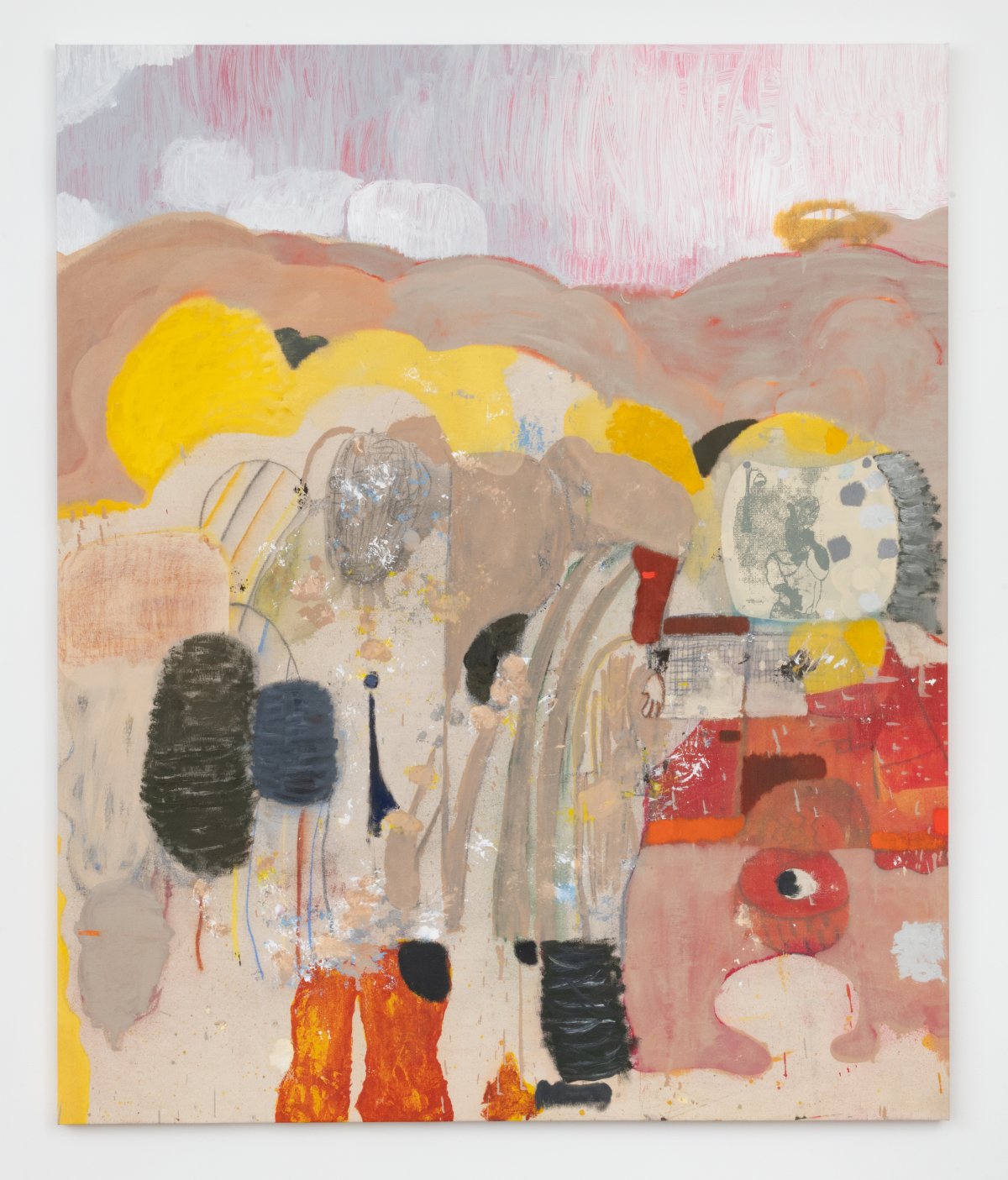 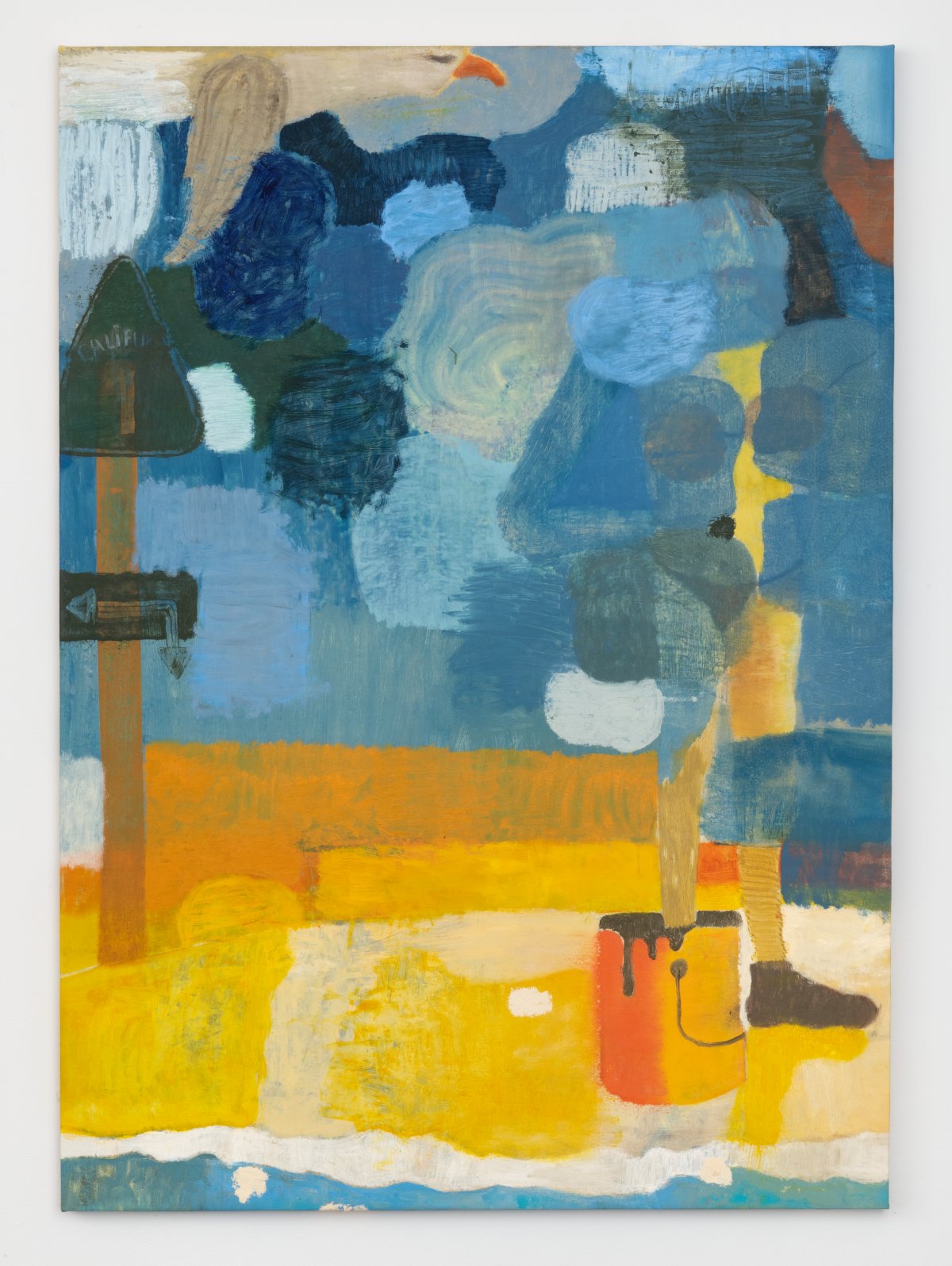 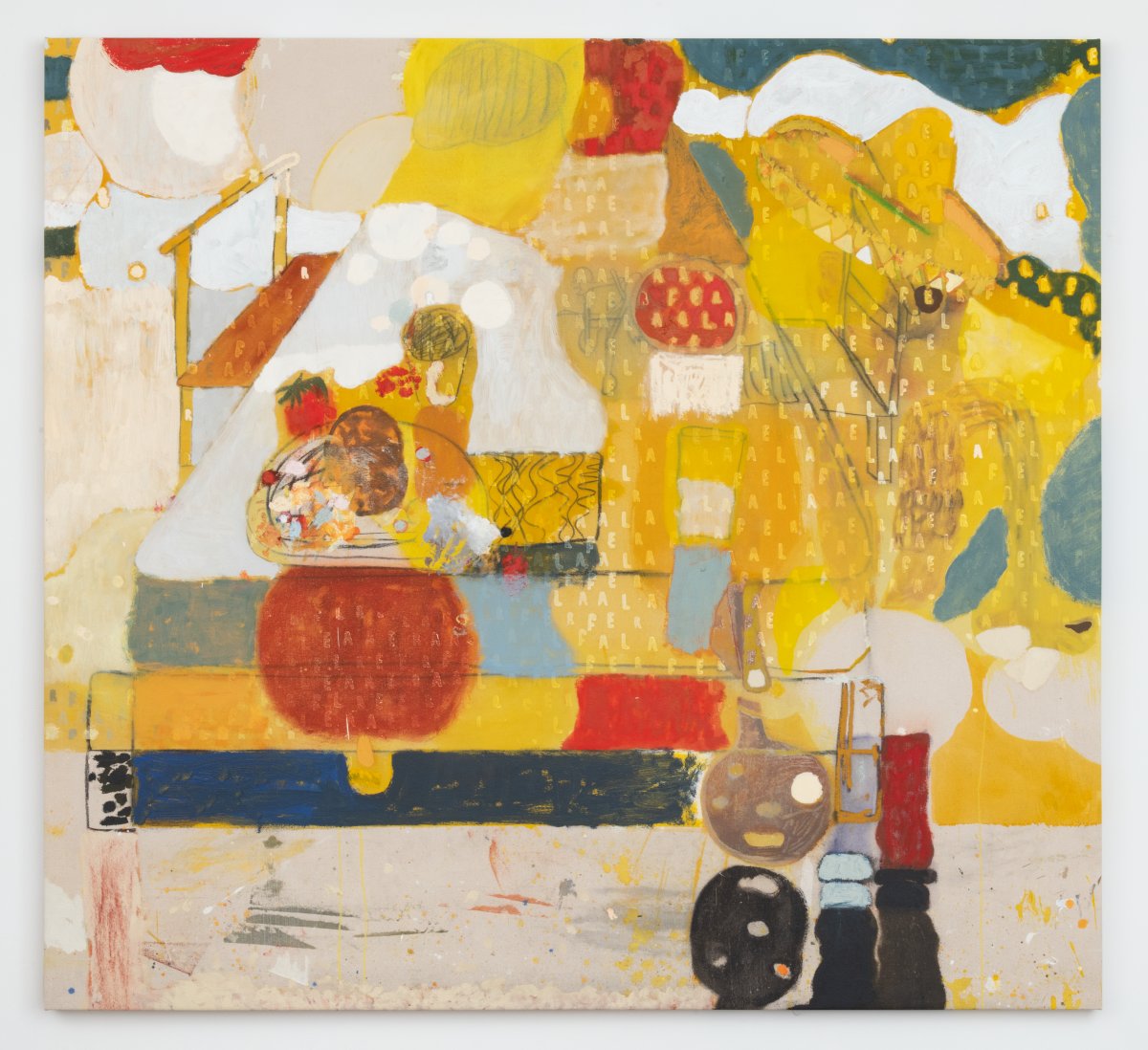 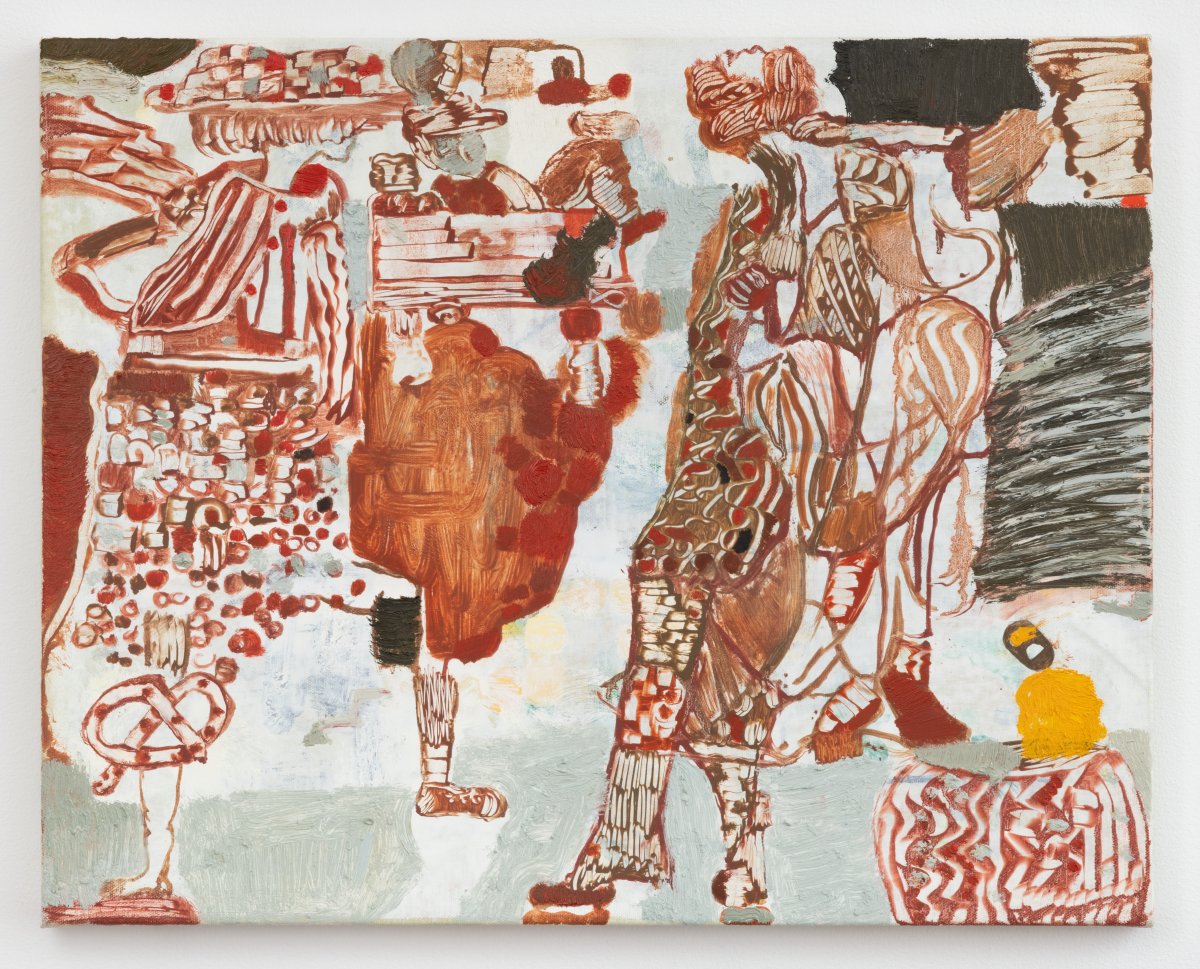 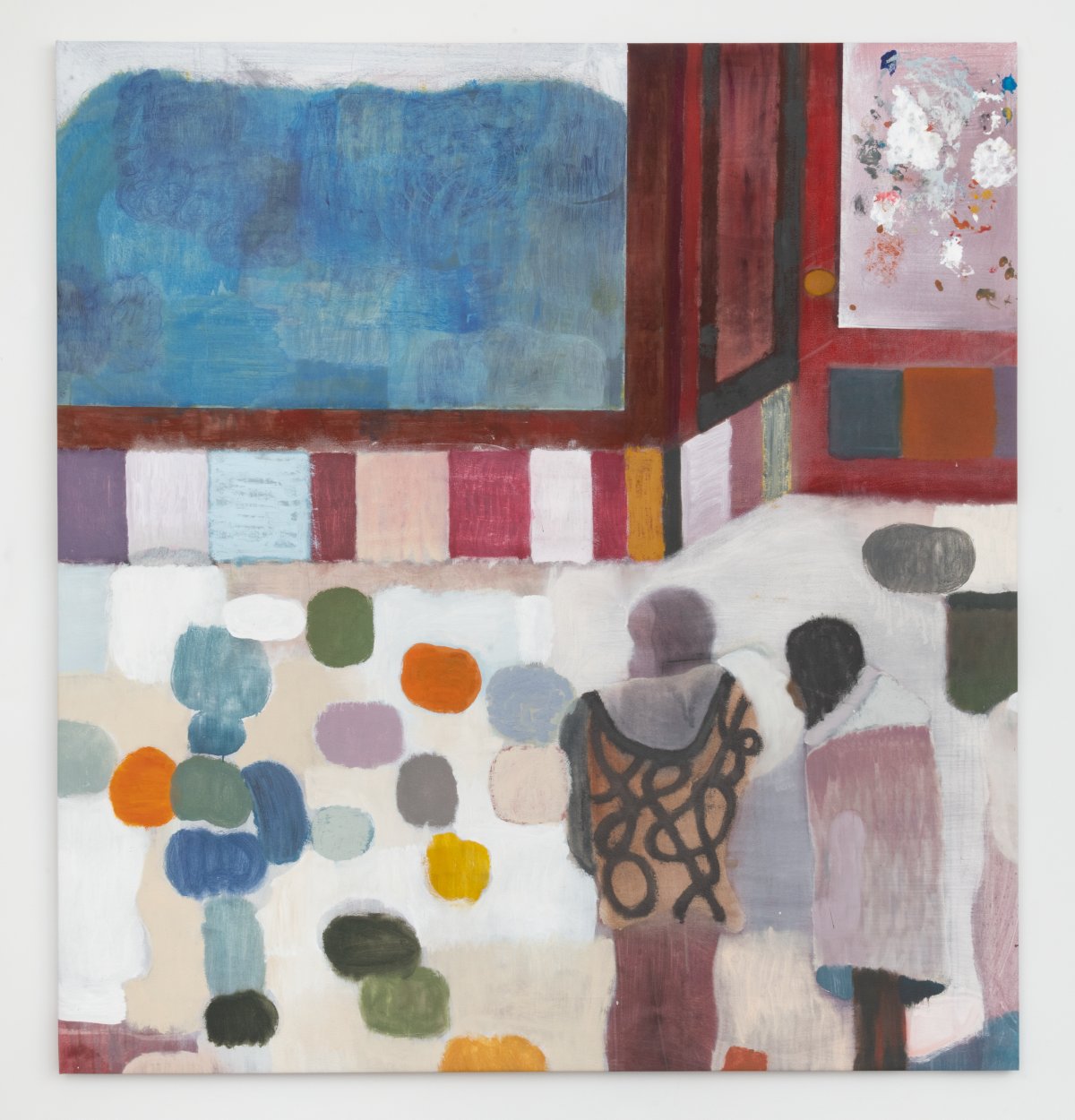 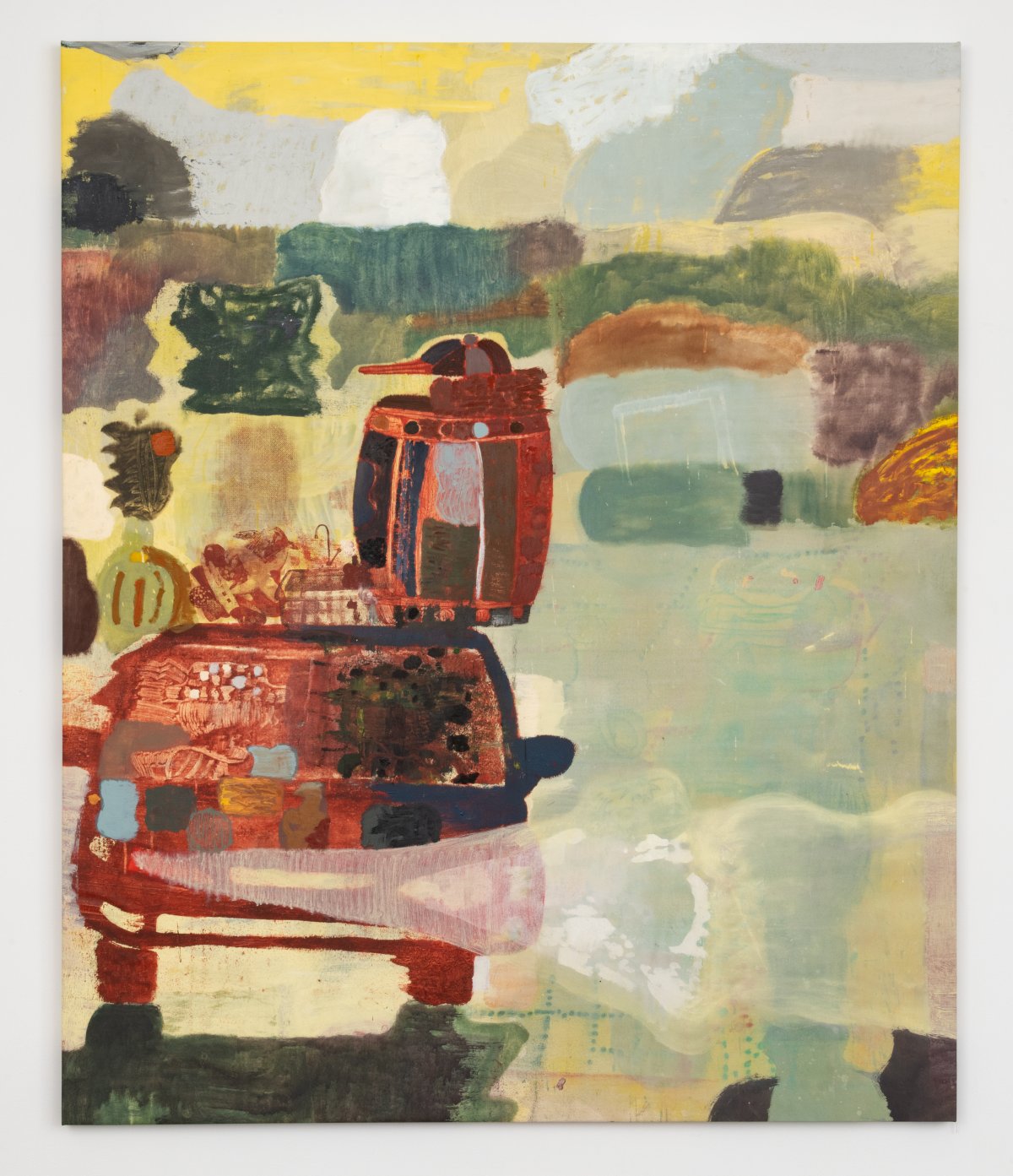 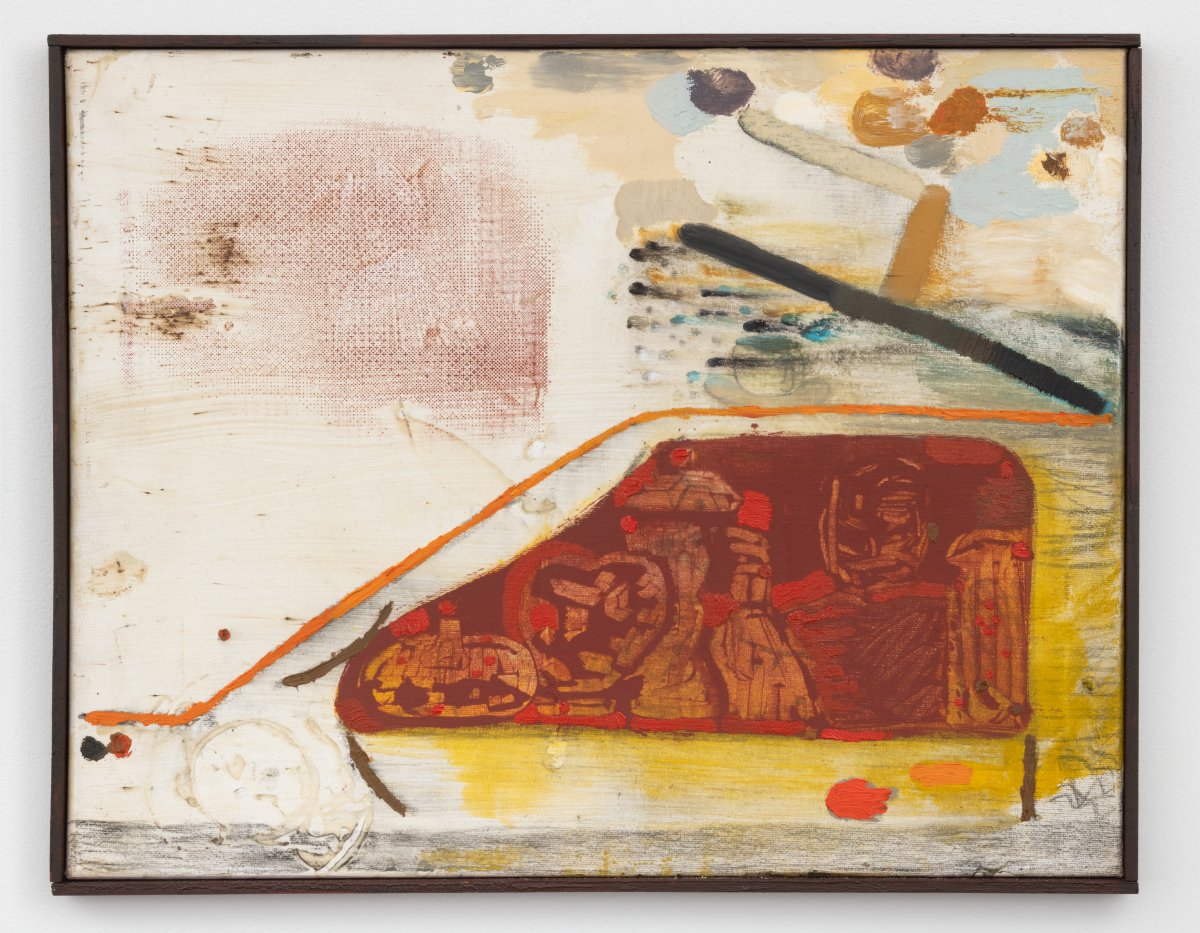 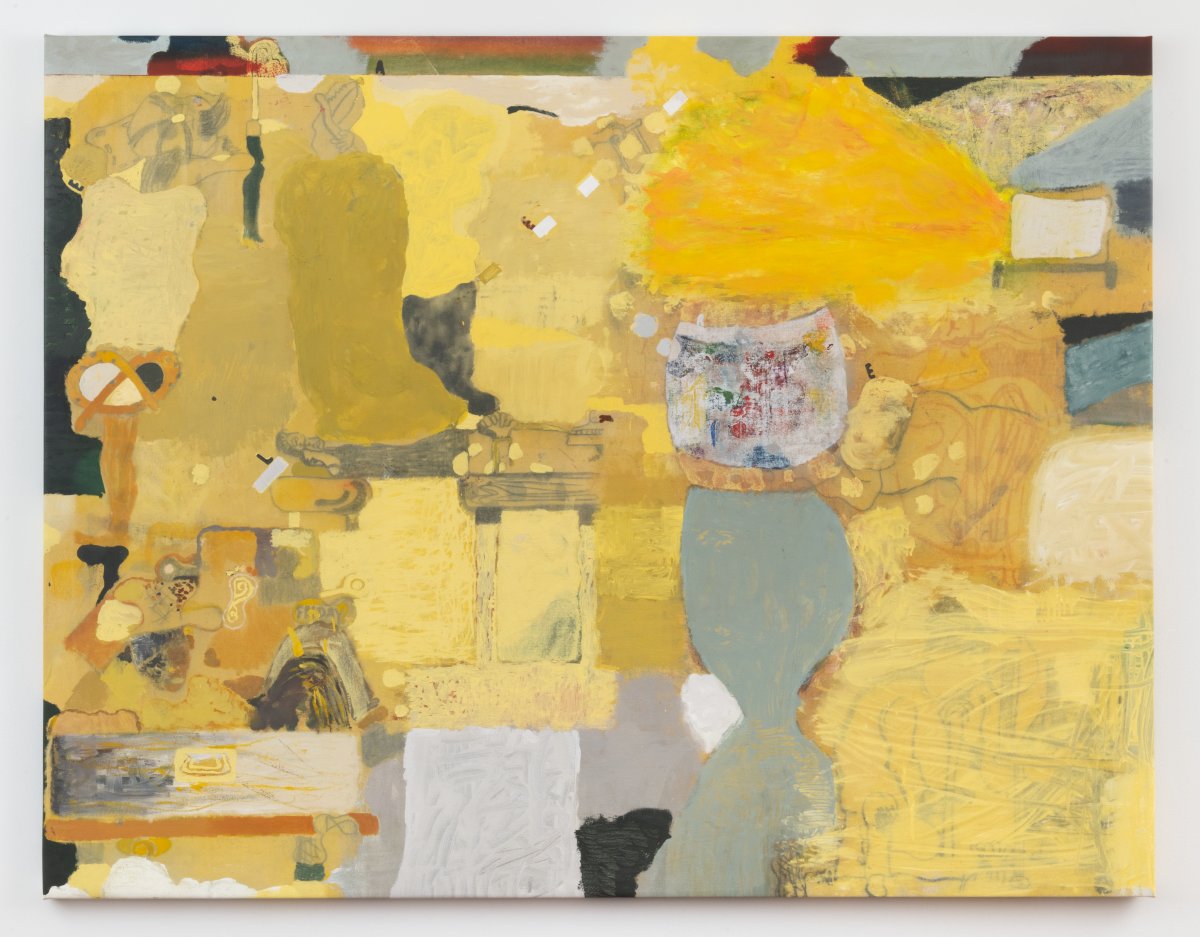 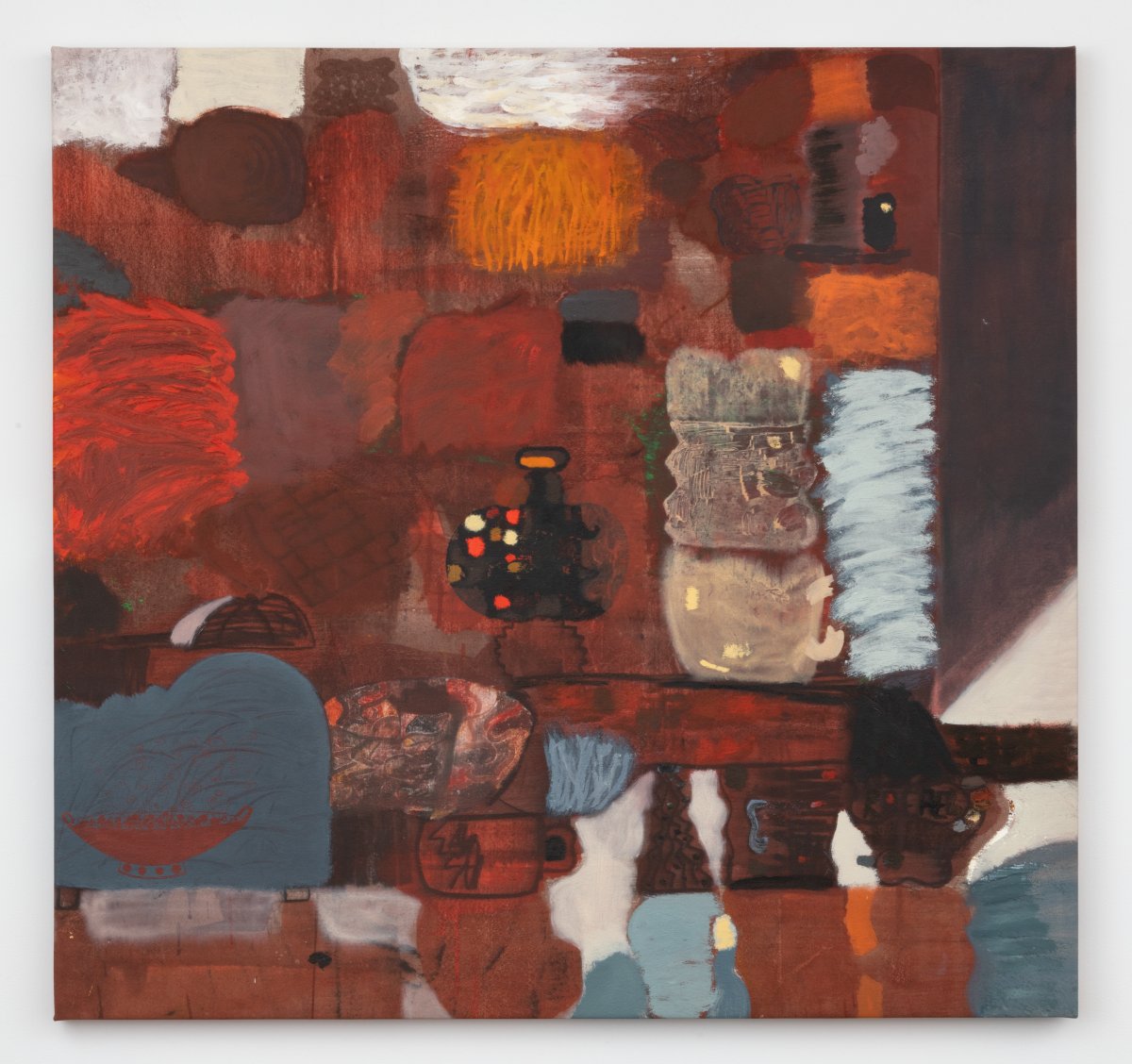 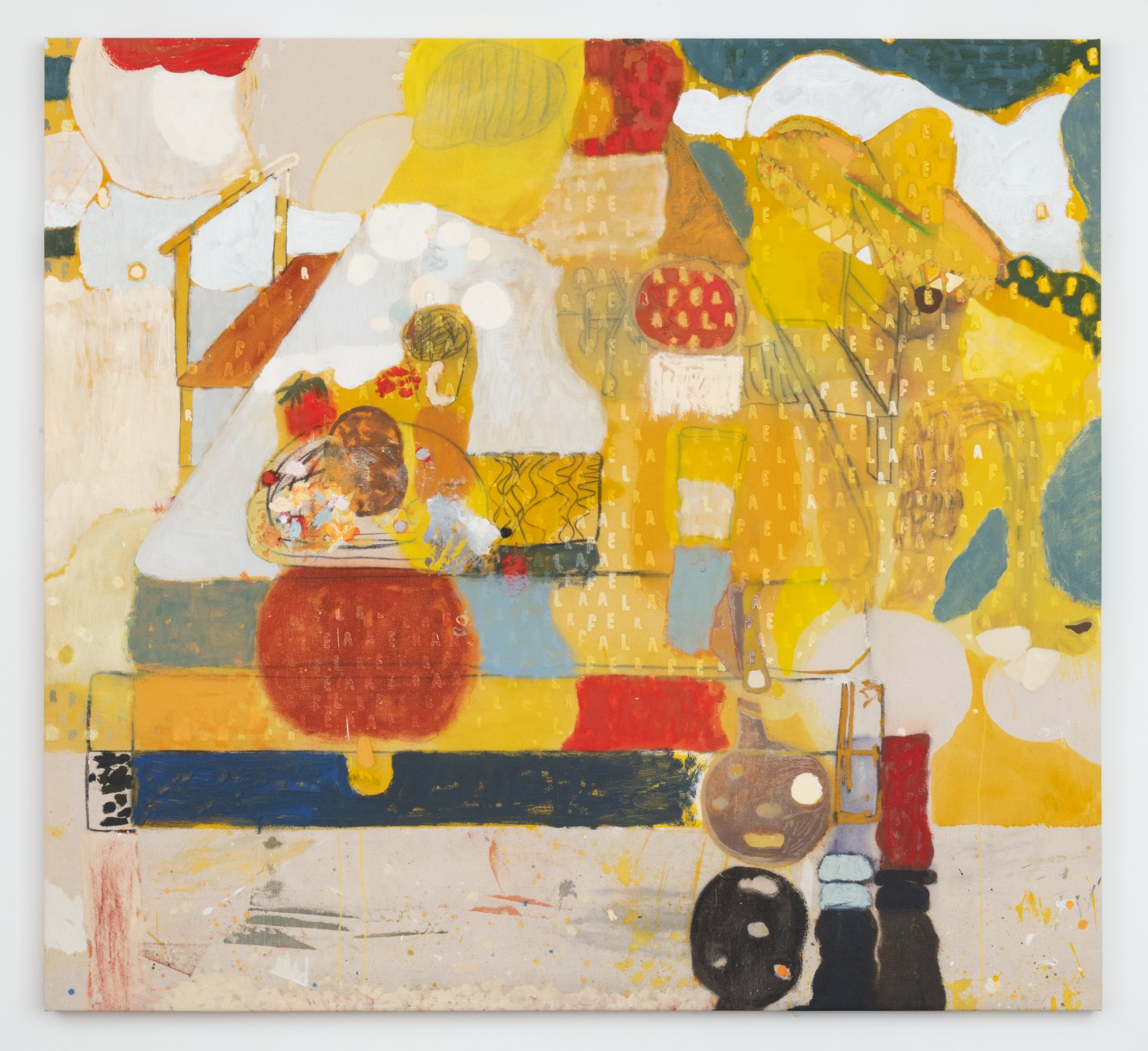 Rafael Delacruz considers a post-digital world by way of traditional means as he weaves surreal narratives in his canvases. Delacruz’s works, which typically employ painterly brushstrokes in tandem with flattened, screen-printed imagery, emulate a distorted and surreal, pixelated world of nomadic existence. Often rendered head-on, Delacruz mines a steady vernacular of near-universal, clip art-like icons; most common are day-to-day staples (e.g. apples, coffee mugs, baseball caps, sinks, and beds) and vehicular references (e.g. buses, cars, tires, shopping carts, and flying contraptions). Rather than imagined or implied space, these images appear to dictate both narrative heirarchy and visual outcomes. Within each piece, Delacruz rejects stylistic monotony in deference to dynamism and effect, and obscures and reveals information and events in vital syncopation. In many works, painted fields of color nestle into one another like fieldstones, establishing physical and emotional atmospheres and providing compositional – and, occasionally, literal – screens for the scenes unfolding within.

Delacruz considers the impact of Ken Price upon his work in the attached statement.

The 1978 “Happy’s Curios” series by Ken Price – mainly all the pottery/print designs he would recreate from Mexican shops he would visit – was the first introduction to his work that really stood out to me. It’s a funny series to look back on, but I was really into the conceptual aspect of it, and emulating it and how it oscillates from folk to contemporary art.

I think about that 1978 show a lot when I think of Ken Price and this show we are all working on – in a way, taking his idea and re-animating it my way, just subtle and nothing drastic. I think it’s a good starting point for me, because I love Baja Mexican folk imagery: the characters, the lazy man sleeping, fashion, the earth tones of the pots, cliche sombreros, and the animals, especially the birds that are depicted. It’s all pop imagery and culture that makes me remember visiting family, and what my grandparents’ house would be decorated in.

Starting from that point in time in Ken’s career to the more “pop” work is a good mix: the zoomorphic ceramic shapes and almost dreary/afterlife paintings of interiors and still-ness of the California landscape is the most influential to my current life with painting and drawing. I love the combination of a frog taking place with a mug; the idea of blending objects together plays a big role in my drawing and when I start a painting. I love the transparent line weight of overlapping mark-making: a car blending into a bed or a bal- loon vendor carrying an array of animals all morphing into one another. Trying to distort the human figure within a landscape is how I see California and Ken Price’s later work. These vehicles – blobs – vessels take the mysterious shape and form of their native environment by banal domestic household items, or the ram- page of life – garbage – abject poverty – addiction.

The infinite meaning to the later ceramic/New Mexico work of Ken Price is also a current state of mind when I try to work on art. I like my process to have hints of nonlinear thinking, and mixing of old drawings and referencing old work into new work. It feels like rewiring ideas into an “abstract” timeline. The narrative is glitched between new and old; resurfacing ideas and finding new ways to start a painting is the most interesting process to me. Drawing plays a major role in my work, and I relate to Ken Price having that as a base to work off for his “impossible” sculptures. Having that fantasy of dream-like shapes and trying to recreate it in real life is very relatable.

On the most elementary level, I also love that Ken Price is from California and was involved in some type of surfing subculture besides the art world?! His old website was great, it felt as if the artist Martin Wong was a surfer. I love the personal hobby-website feel it had, especially his penmanship and funny manifesto about ceramics. I think the website is gone now.