Eamon Ore-Giron: The Symmetry of Tears

Eamon Ore-Giron: The Symmetry of Tears

James Cohan presents The Symmetry of Tears, an exhibition of new paintings by Eamon Ore-Giron. This is Ore-Giron’s debut solo exhibition at James Cohan. 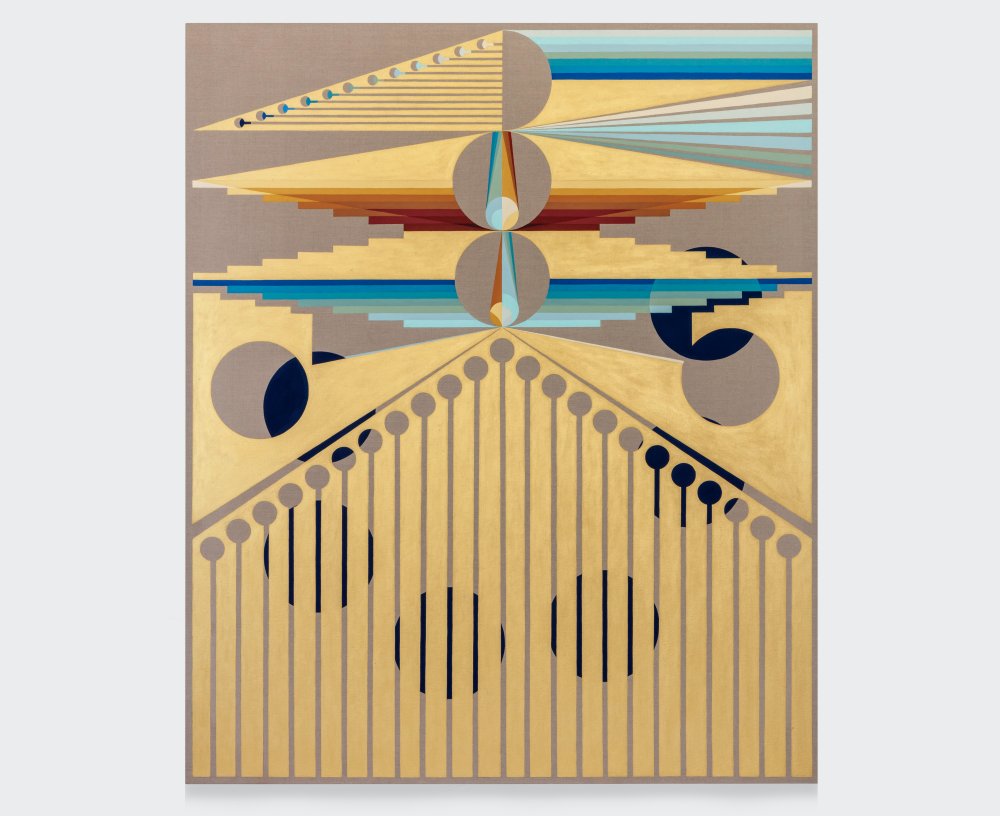 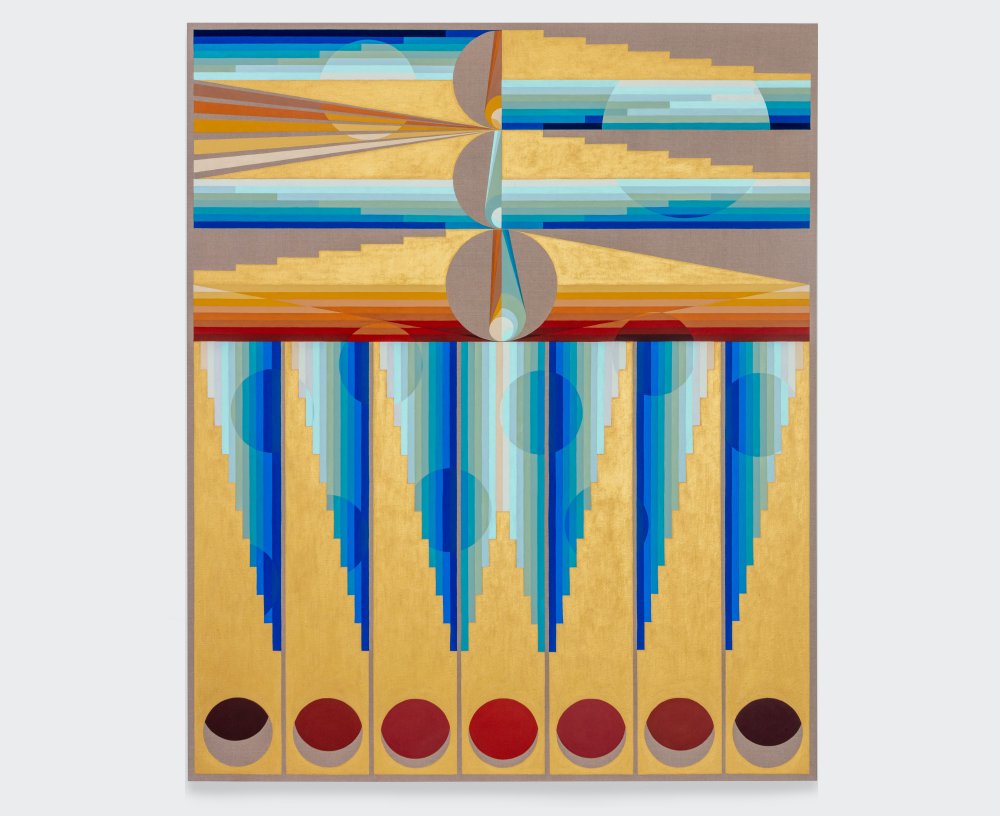 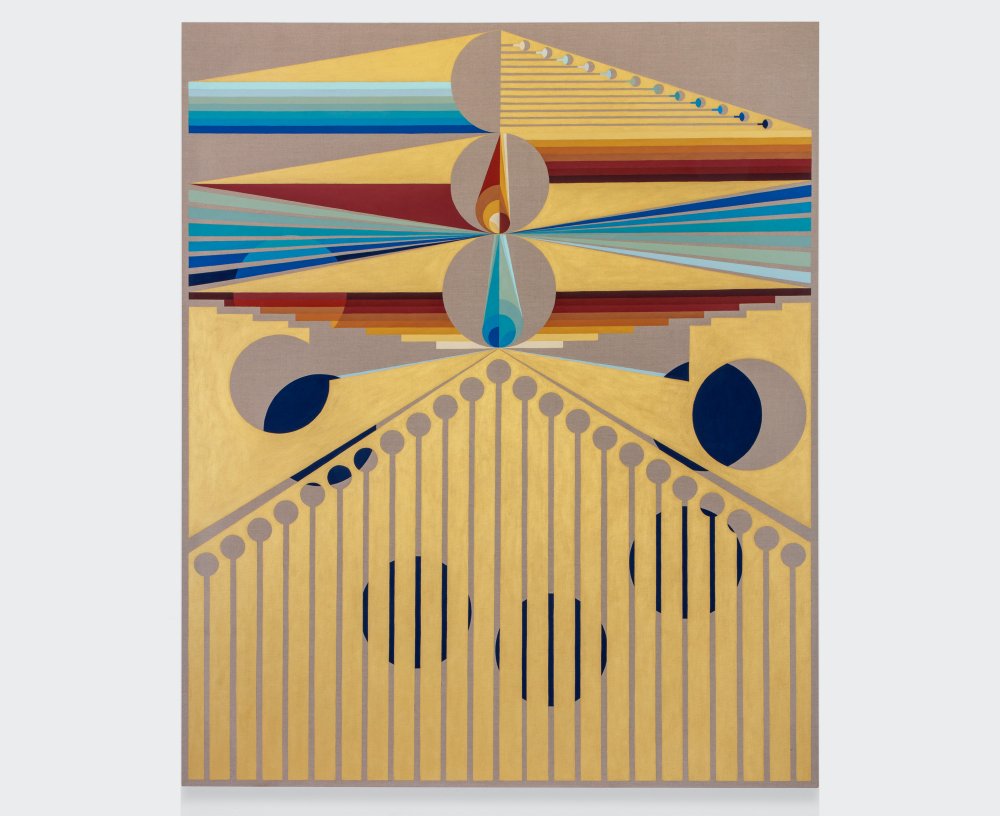 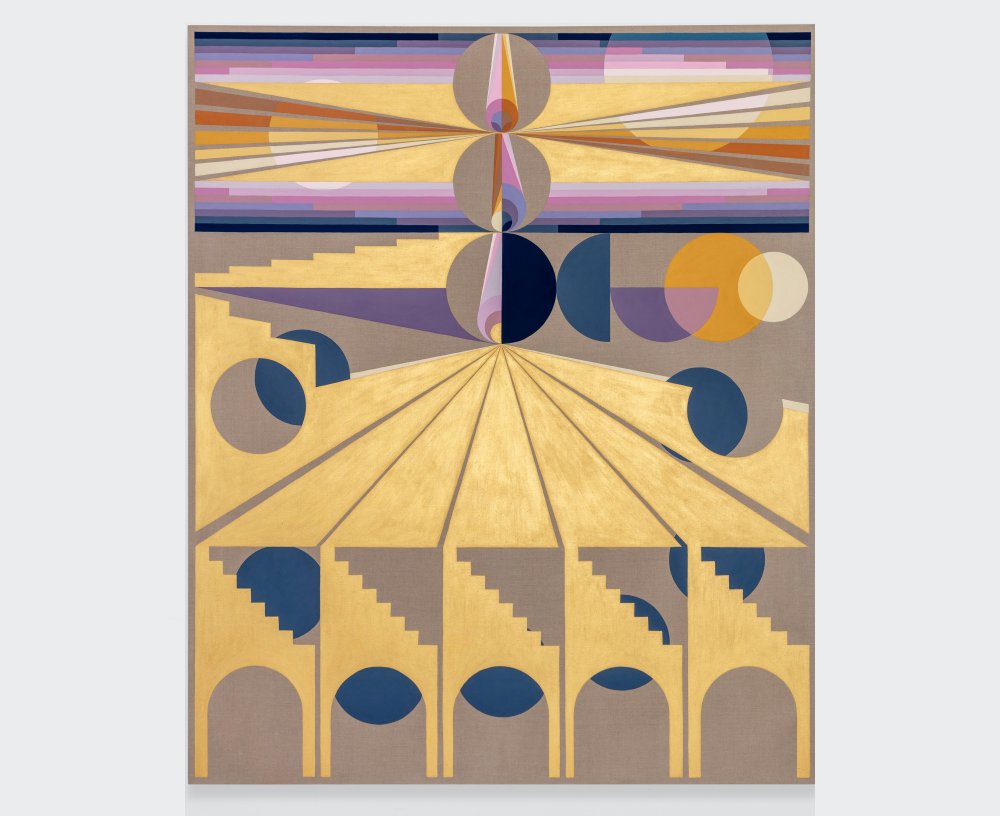 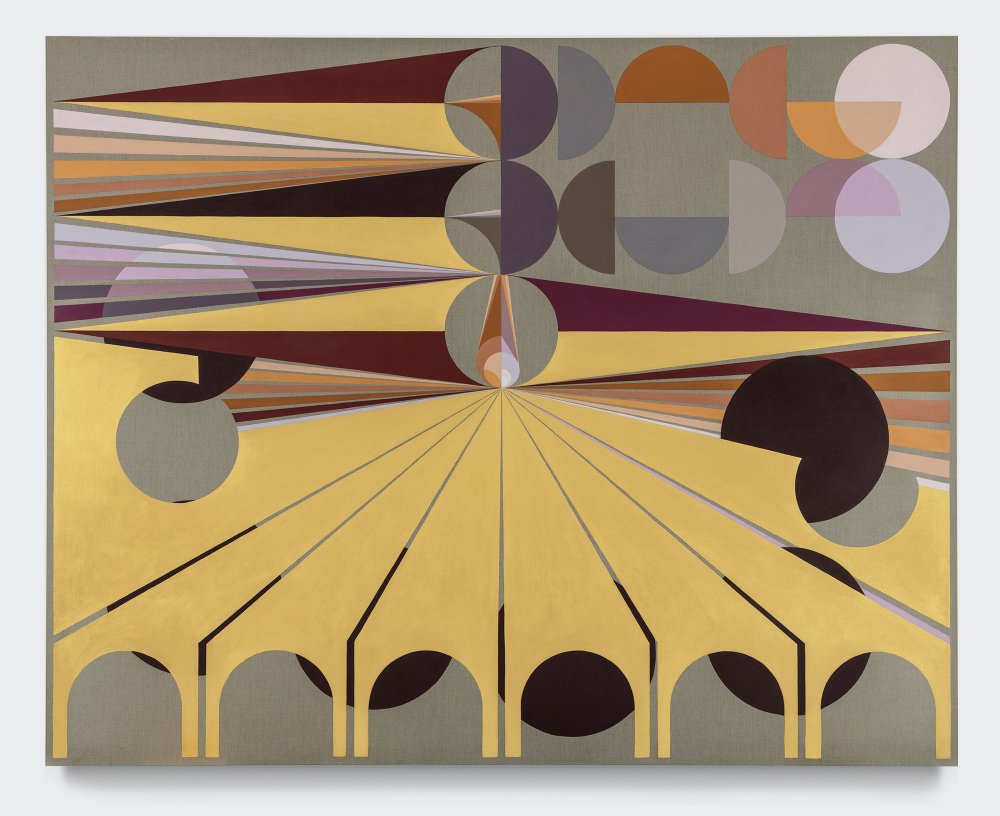 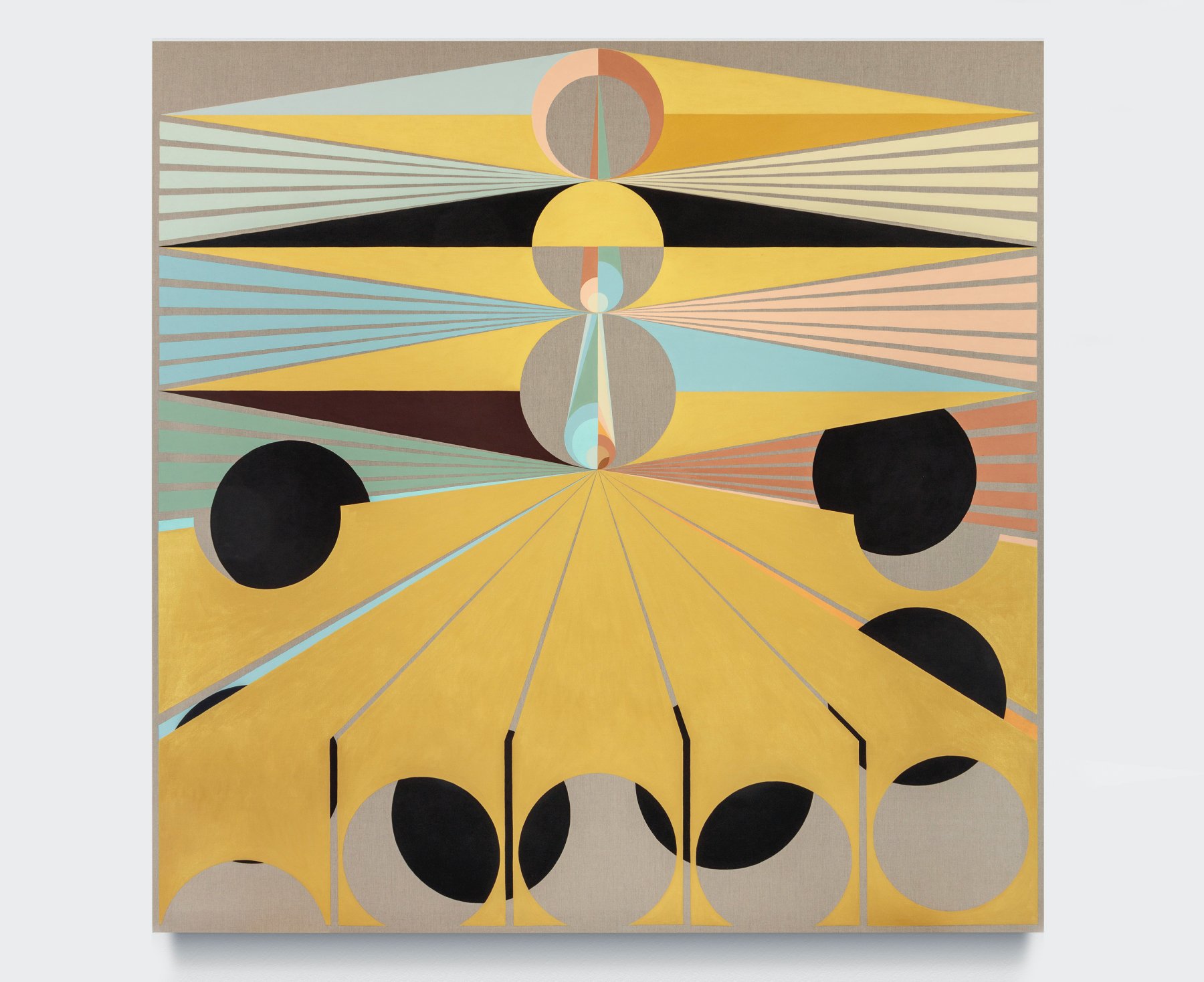 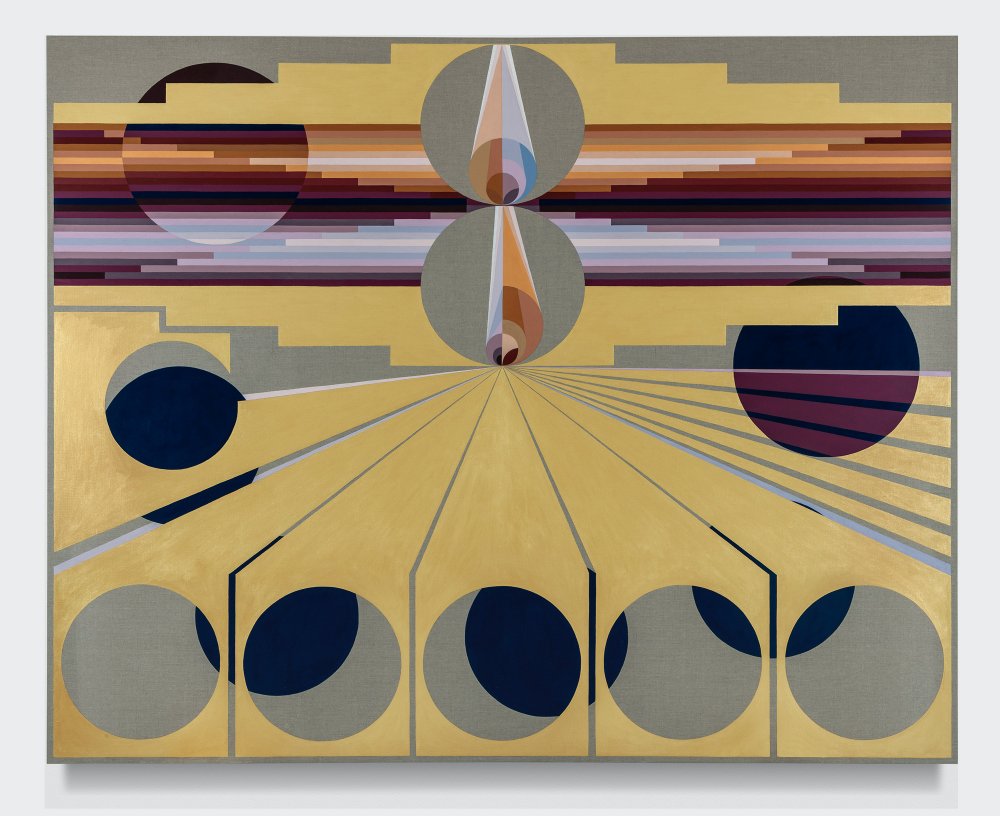 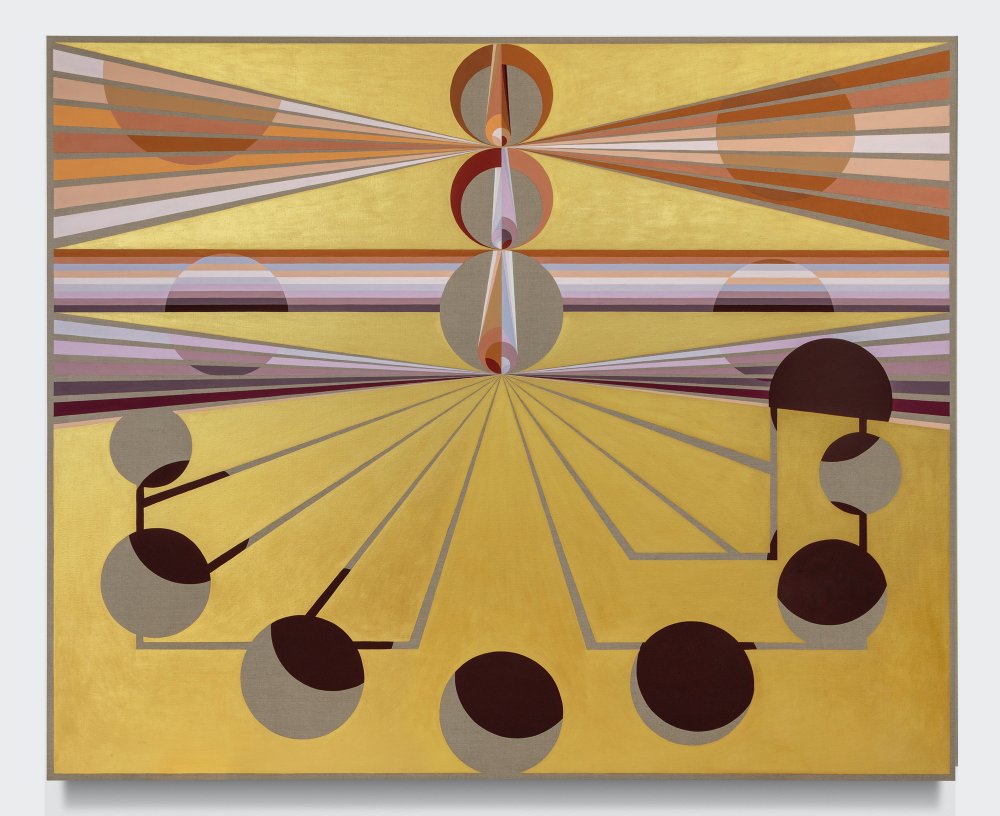 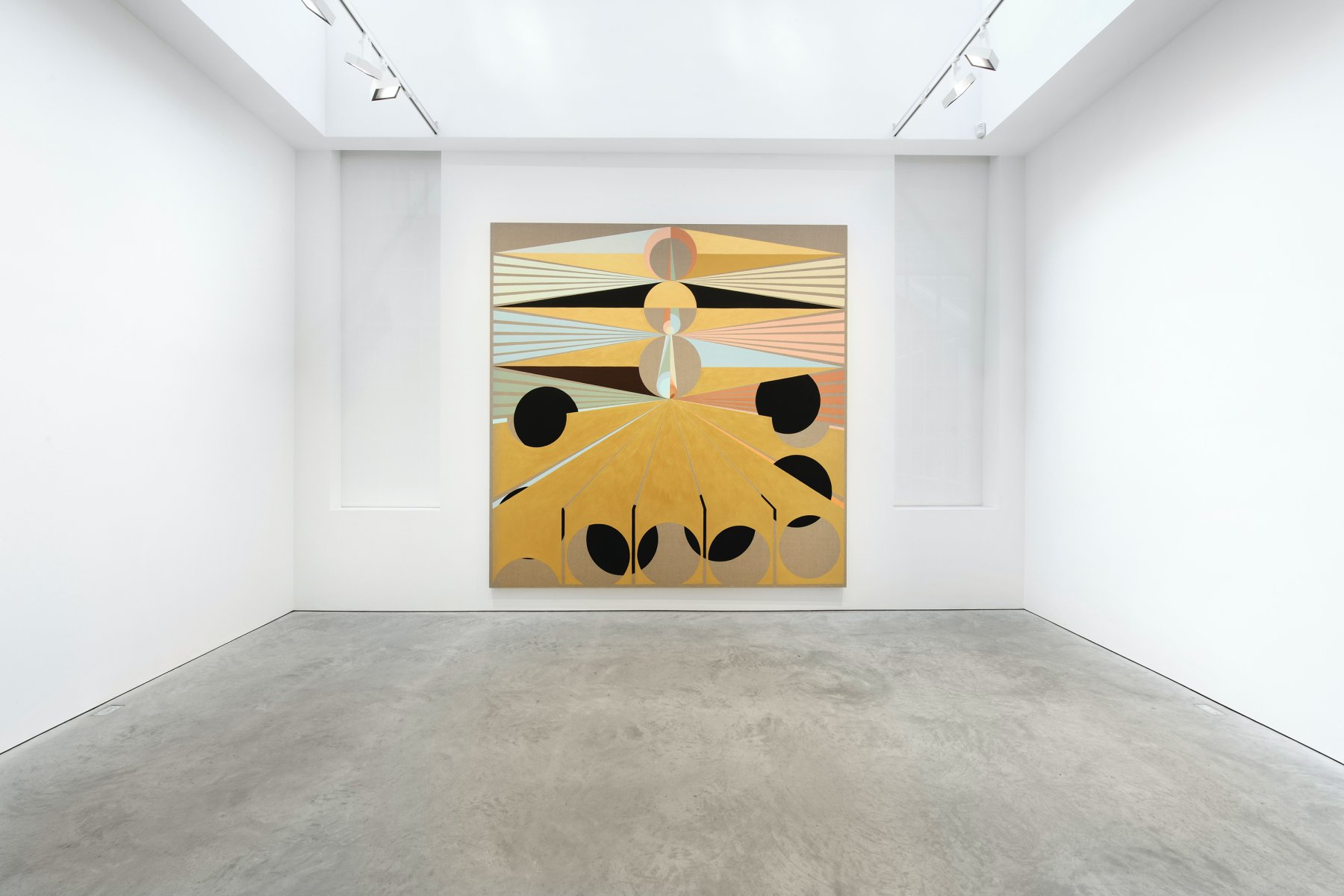 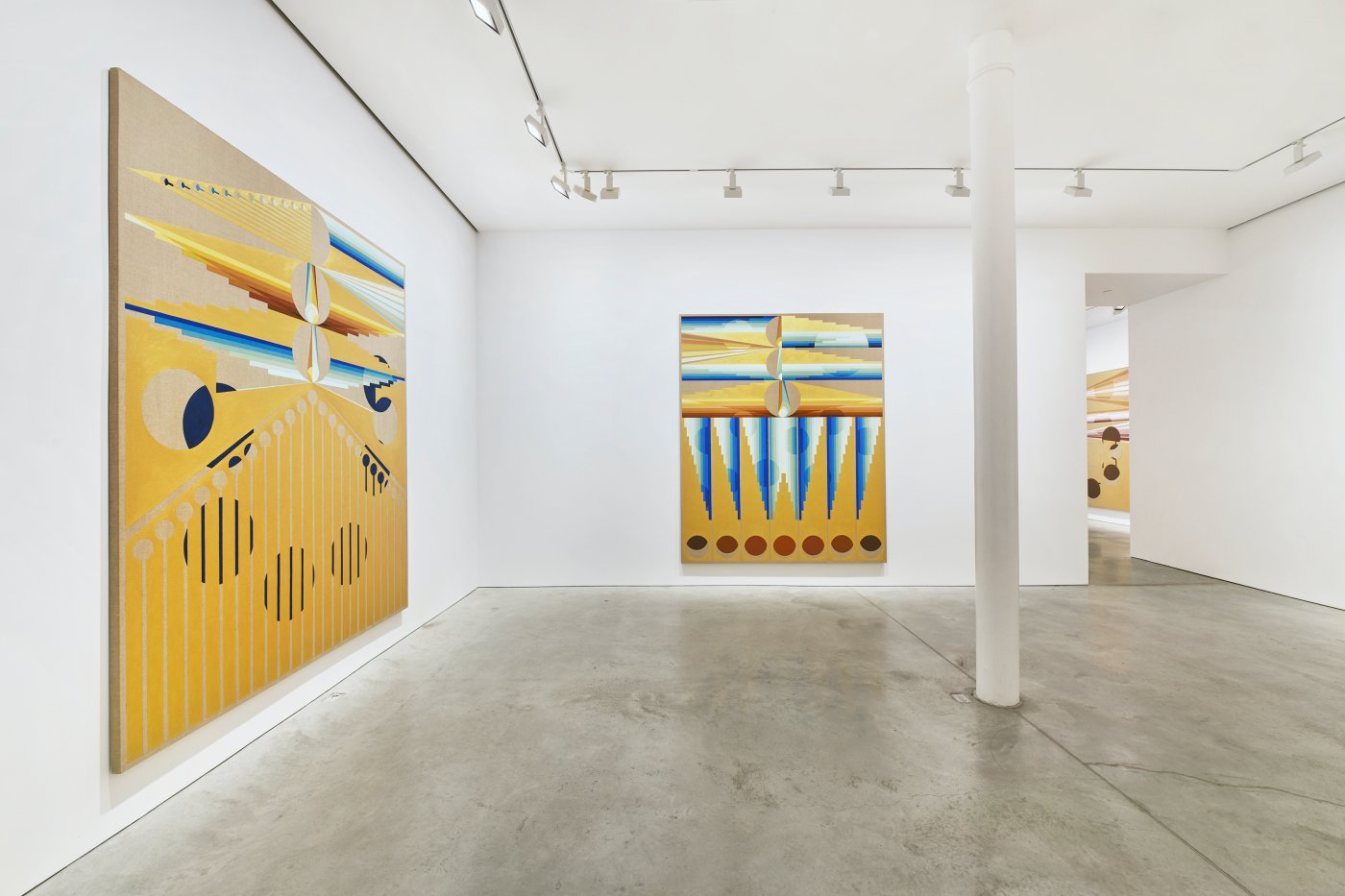 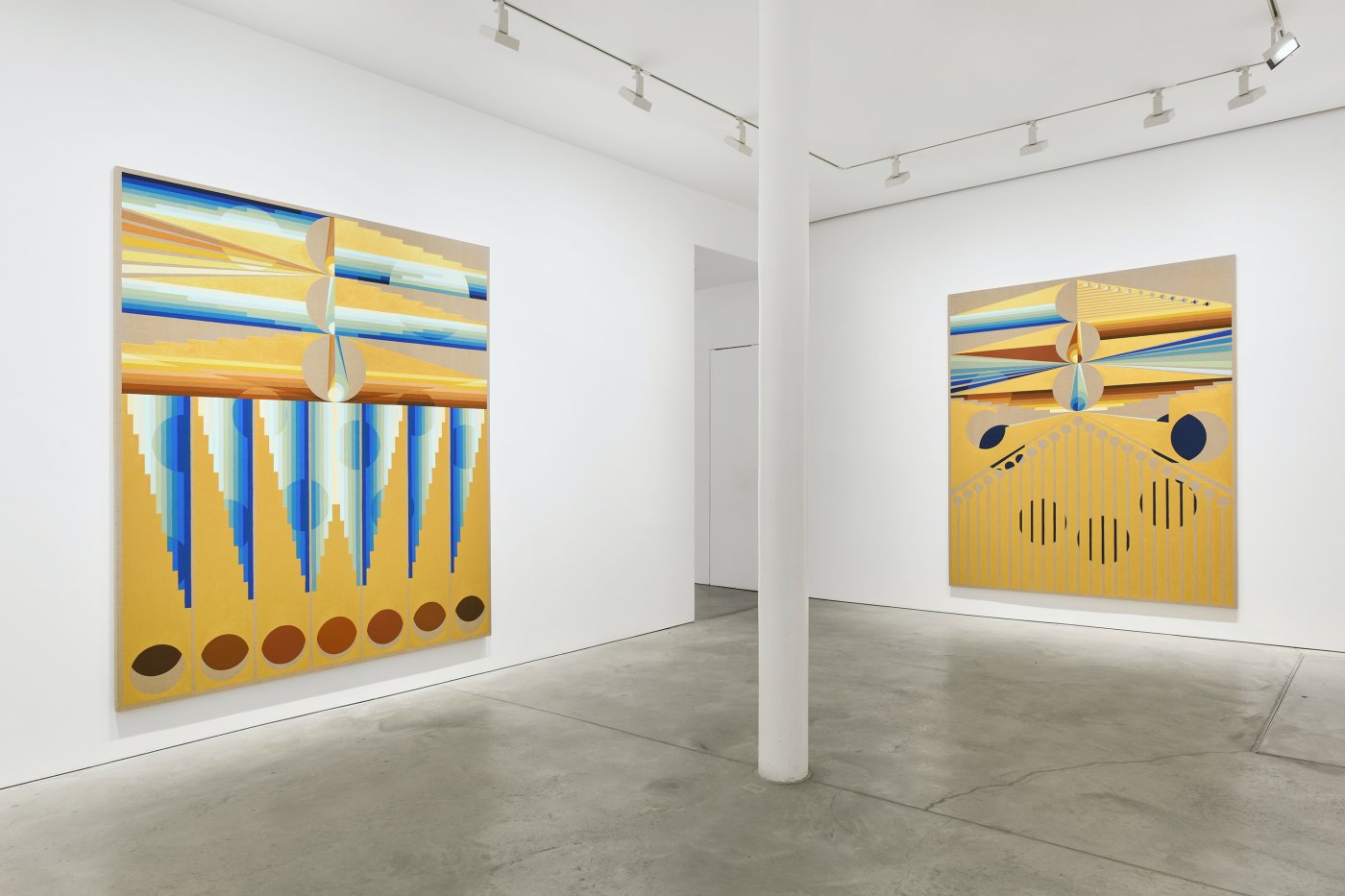 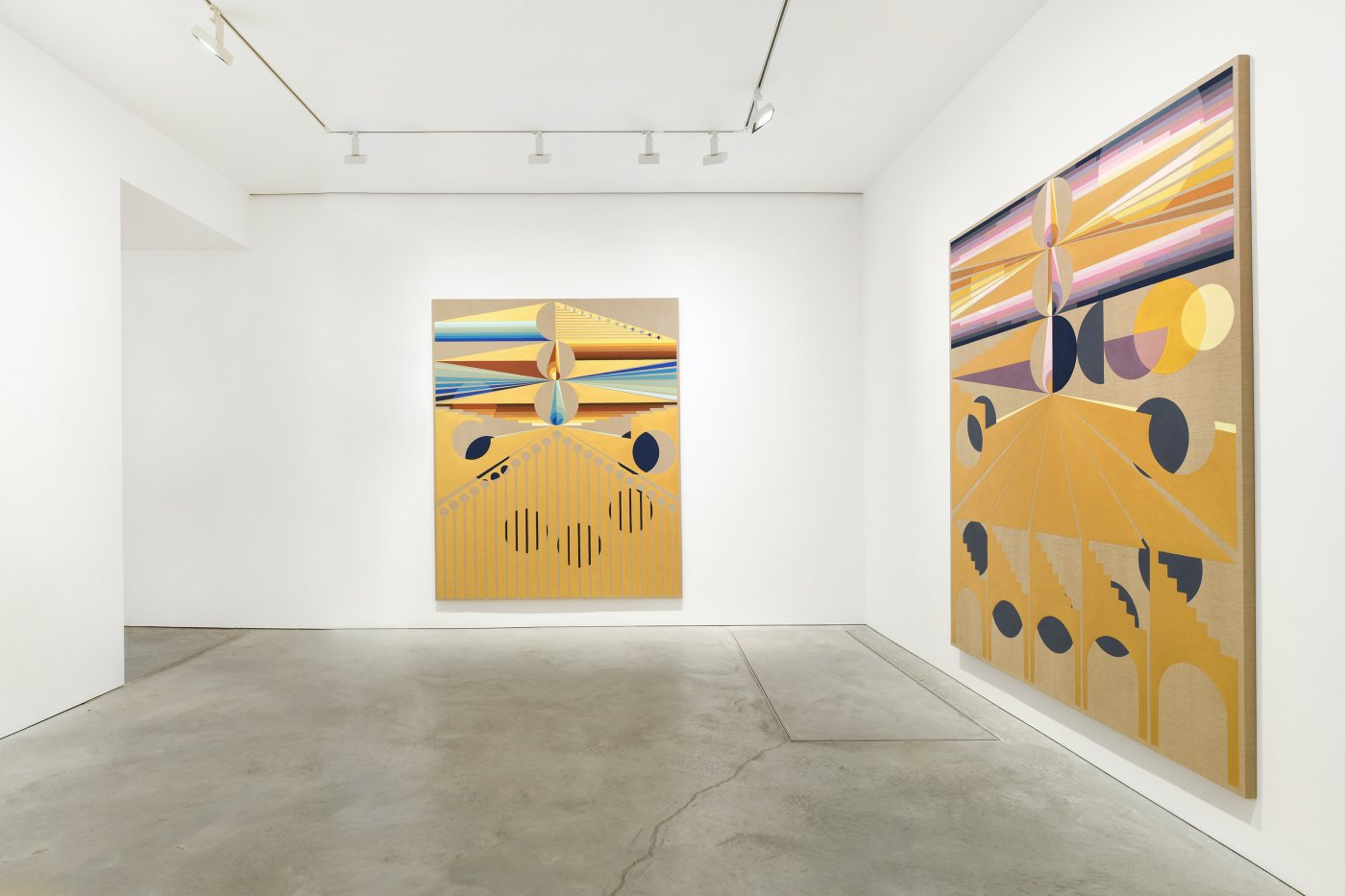 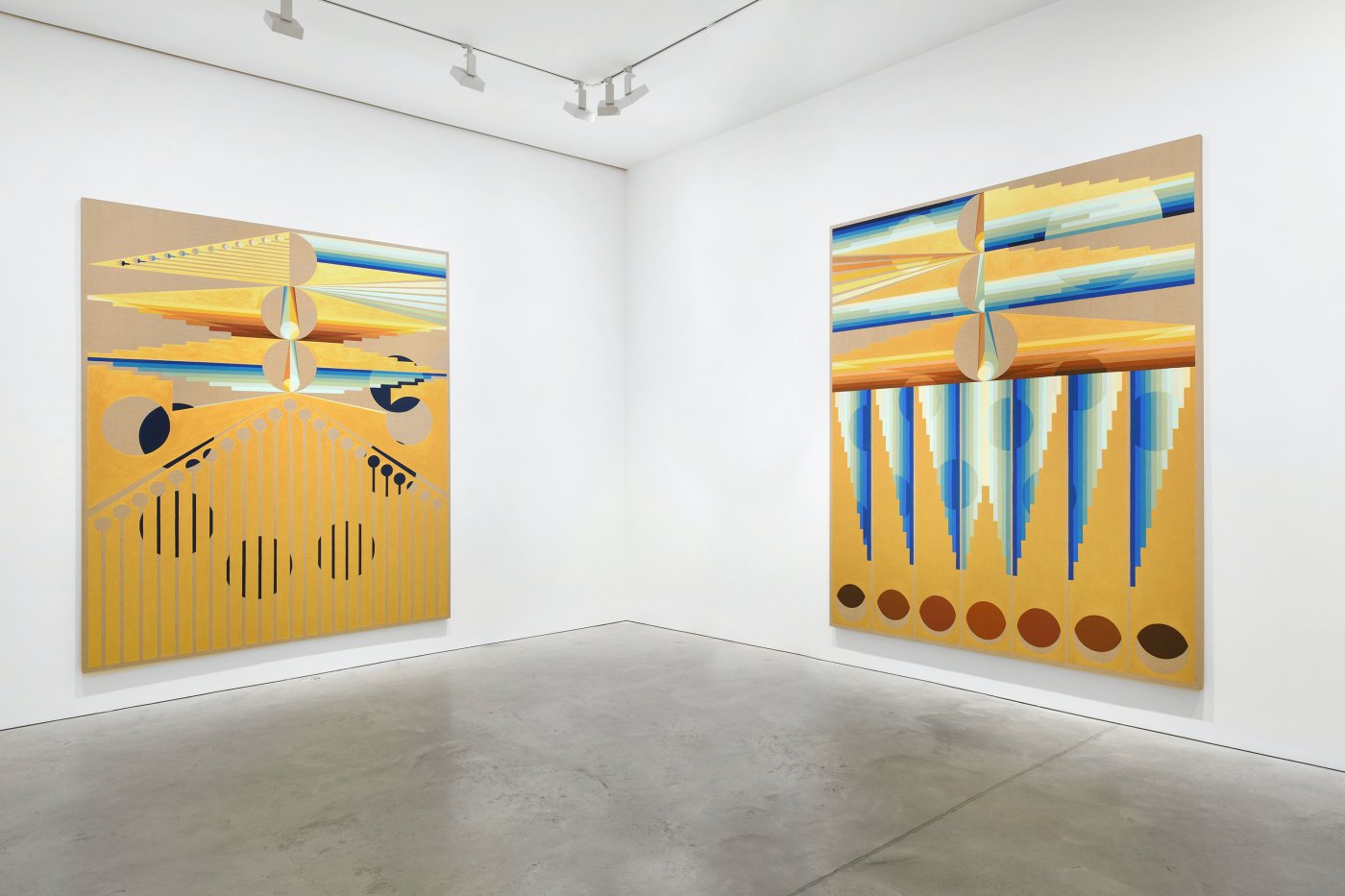 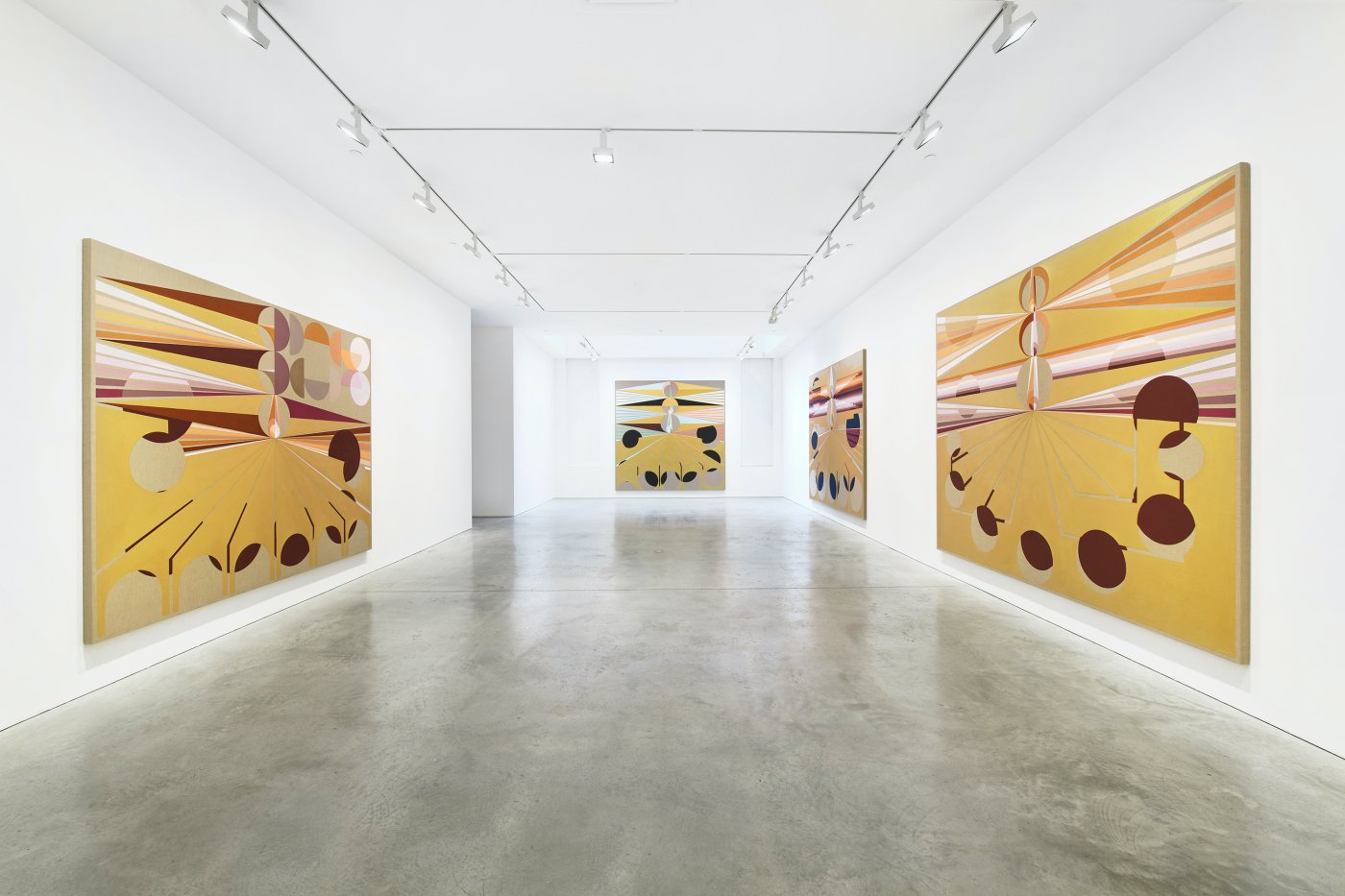 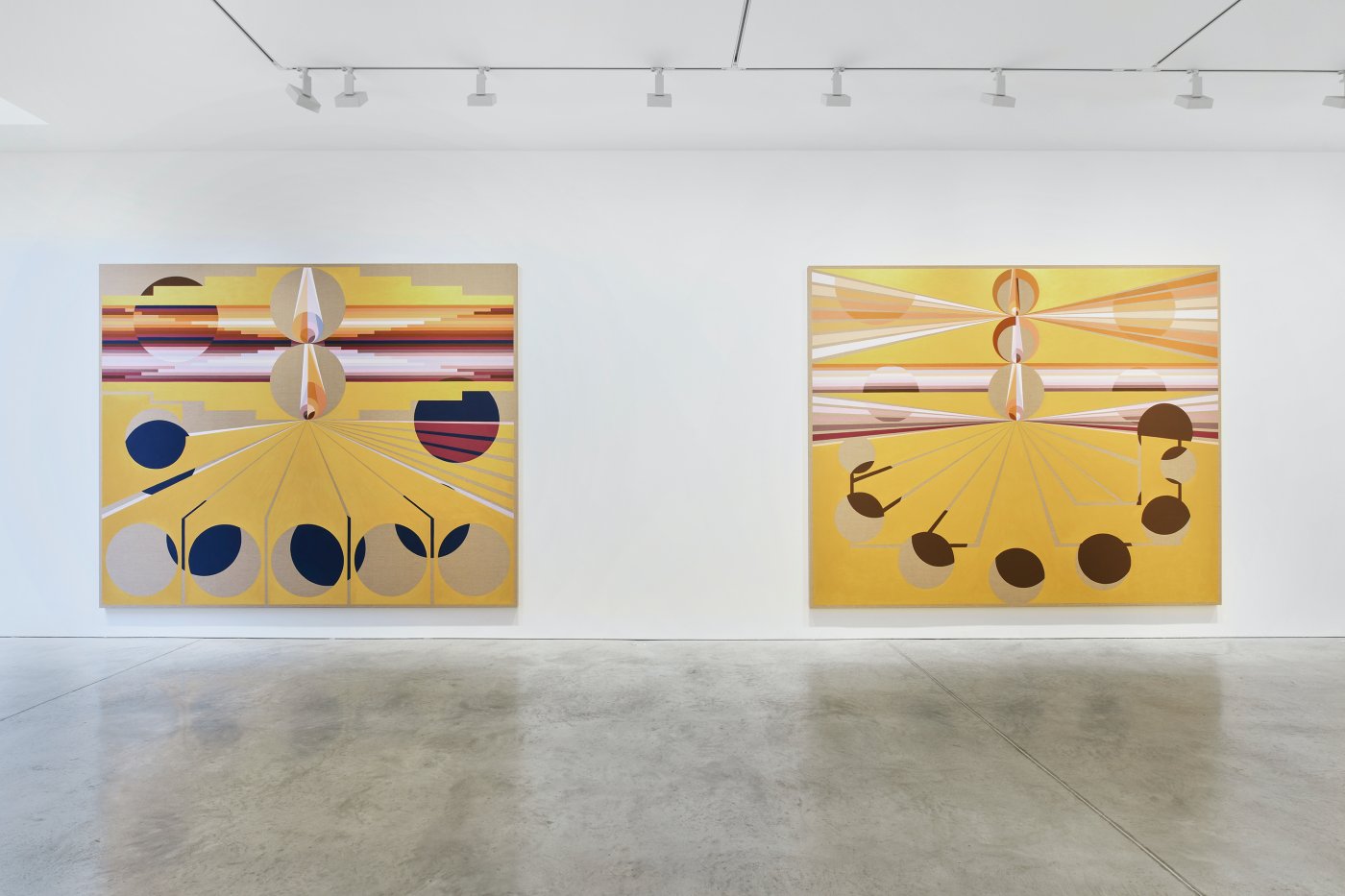 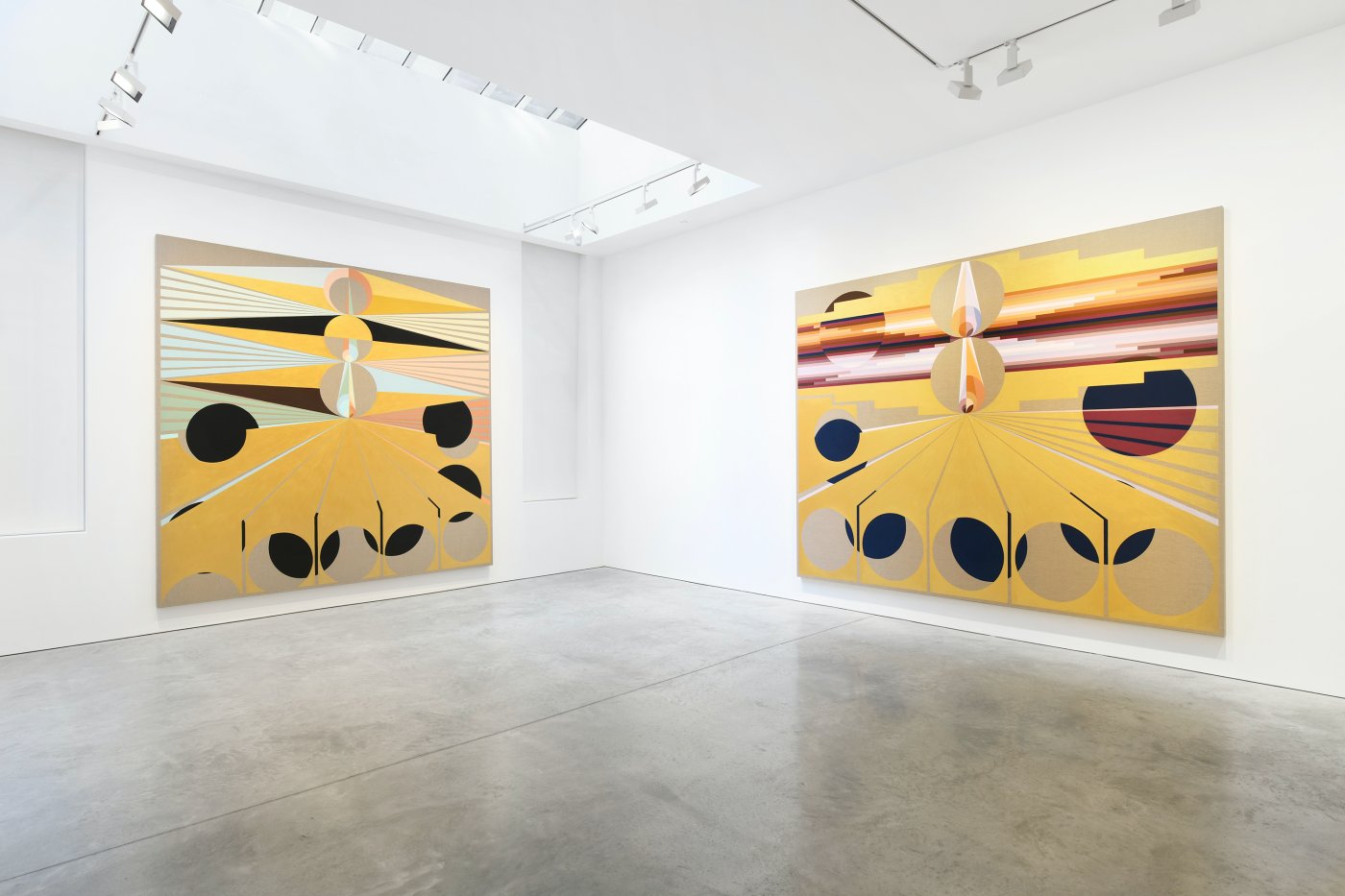 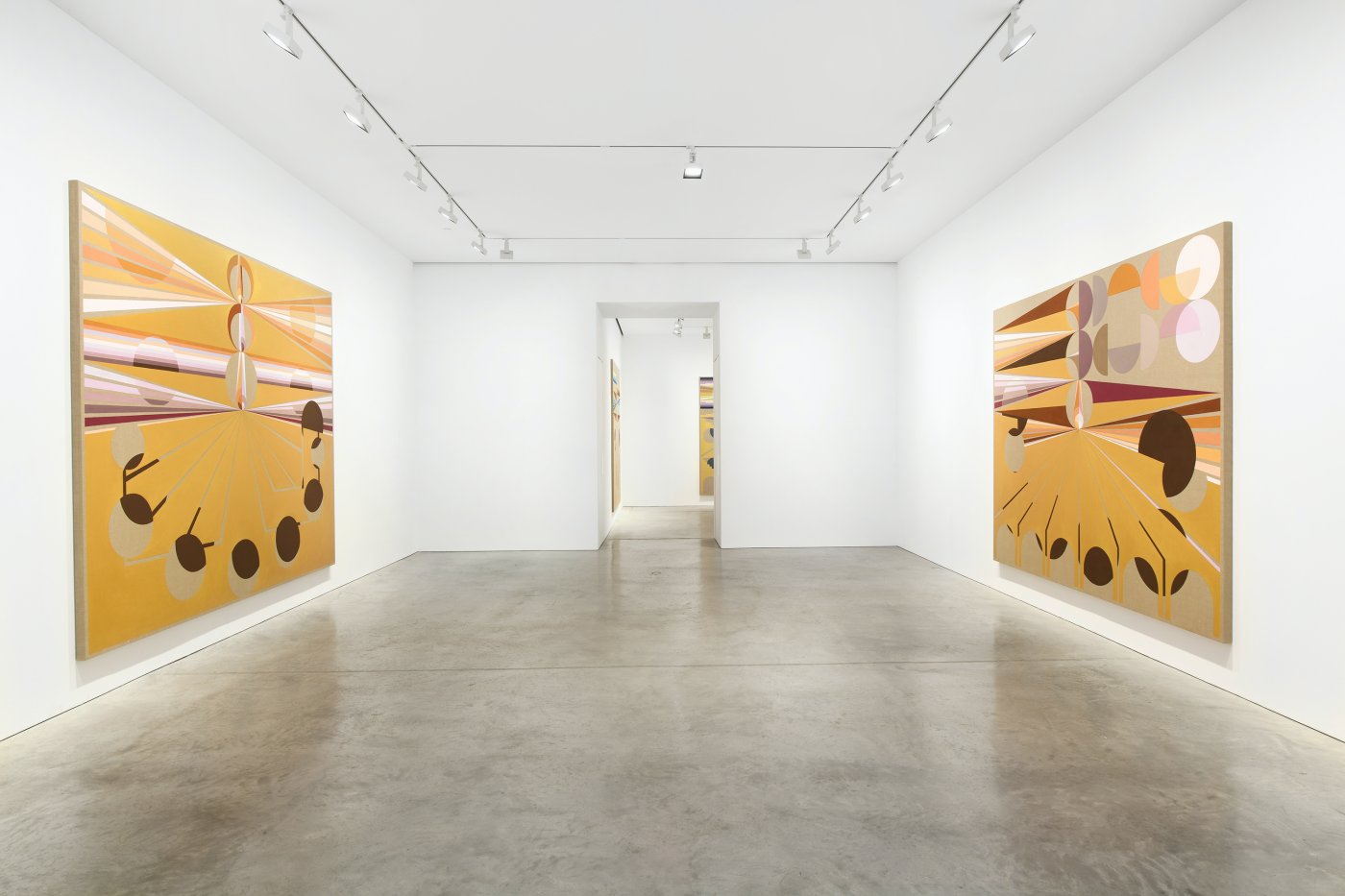 Multiplicity and simultaneity are central to Ore-Giron’s wide-ranging practice. Across his interconnected pursuits in painting, music, and video, he synthesizes formal histories to explore the visual, auditory, and experiential possibilities of cross-cultural influence. With The Symmetry of Tears, Ore-Giron presents new paintings from his ongoing Infinite Regress series, continuing to expand his investigation into abstraction.

Within this series, the artist’s totemic visual language is subject to an ongoing process of reformulation. In philosophy, infinite regress is a sequence of reasoning which never ends, a paradox of limitless regeneration that disproves the concept of fixed knowledge—in connecting one element to another, a third one is generated and so on, endlessly. Ore-Giron paints with highly-pigmented flashe on raw brown linen, creating evocative forms that recall religious iconography, sacred landscapes, and celestial bodies in cyclical passages of time. With simple geometric shapes that shift in and out of graphic fields of gold, the paintings in this series are each a variation on the one that came before, suggesting a trajectory of future iterations. Their chromatic planes play on spatial recession and optical perception as they trace an infinite path forward.

The Symmetry of Tears takes its name from the broken teardrop motif that appears in the paintings in the exhibition. Inspired by an ancient Andean stone carving in Quillarumiyoc—an Incan temple dedicated to the moon in the Cuzco region of Peru—this form initially appeared on the periphery of Ore-Giron’s Infinite Regress paintings. It has become increasingly central to these works as the series has developed over the past five years. The artist originally encountered this pre-Columbian tectonic structure in Cesar Paternosto’s influential 1996 treatise The Stone and the Thread, which delineates the Andean origins of abstraction, and a history of this visual language outside of the dominant narrative of a European context. Executed on a larger scale than most of Ore- Giron’s previous Infinite Regress works, the new paintings in The Symmetry of Tears reference historical veins of monumentalism and muralism, allowing for a bodily relationship between the viewer and the canvases.

Ore-Giron’s paintings destabilize aesthetic hierarchies, drawing from a range of sources—such as the stylized geometry of Incan jewelry, Brazilian Neo-Concretism, Italian Futurism, and the spatial arrangements of Russian Suprematism—that reflect diverse systems of knowledge and ways of being. Inserting pictorial and rhythmic structures from the Global South into an expanded history of transnational abstraction, Ore-Giron’s works embody what curator Marcela Guerrero refers to as “the sound and color of mestizo synesthesia.” Operating within these points of intersection allows Ore-Giron to examine his own varied cultural inheritances. He asks, “What are my inherited forms? What is my chromatic lineage? I am always confronted with the question of where my agency begins, and what has been there all along, waiting to be revealed.”

The exhibition will be accompanied by a musical track entitled “Past Yesterday,” created by the artist and his long-time collaborator and friend Christopher Avitabile. The music—an ambient mix of rhythmic drone—was developed, remixed, and produced remotely between Ore-Giron and Avitabile, working from different locations while in quarantine. “Past Yesterday” was conceived as a separate, but complementary, element to the paintings and grows out of a similar approach to creative production that prioritizes the possibility of disparate elements finding synthesis and harmony.

Eamon Ore-Giron (b. 1973) grew up in Tucson, Arizona and has spent significant time in Peru, where his father was from, and Mexico. His travels, personal biography, and formal education as a fine artist—he received a BFA from the San Francisco Art Institute and an MFA from the University of California, Los Angeles—have shaped his interest in exploring cultural hybridity and his formal vocabulary, which references artistic traditions and movements that span geographies and time. His work has been featured in shows that include SOFT POWER at the San Francisco Museum of Modern Art (2019); Made in L.A. 2018 at the Hammer Museum, Los Angeles; Soul Mining at the ASU Museum of Art, Arizona State University, Tempe (2017); Something Else, the OFF Biennale Cairo (2015); and the 2008 California Biennial at the Orange County Museum of Art, Newport Beach, California. He has also been the subject of solo exhibitions at LAXART, Los Angeles (2015); the 18th Street Art Center, Santa Monica (2012); and the Pennsylvania Academy of the Fine Arts, Philadelphia (2005), among others. His work as part of the collaborative duo LOS JAICHACKERS has been shown at Pérez Art Museum Miami (2013) and the Los Angeles County Museum of Art (2008), and in Prospect.3, New Orleans (2014).