«full of merit, yet poetically, man dwells on this earth»
In Lovely Blue – Friedrich Hölderlin 1843

Perrotin presents Dwellers, a dual exhibition across the New York and Paris galleries that brings together the work of nine artists who explore how place impacts the making of an artwork. 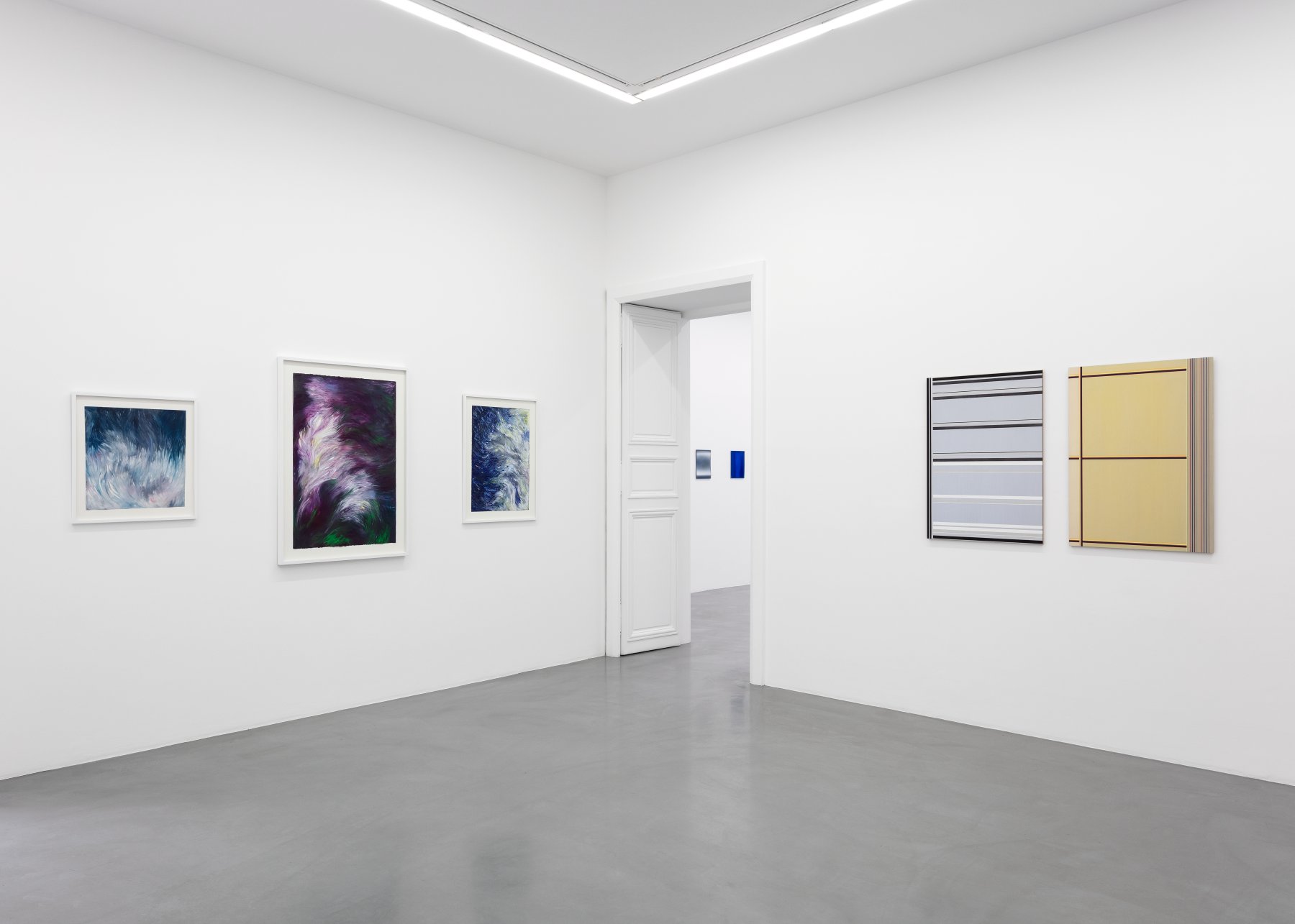 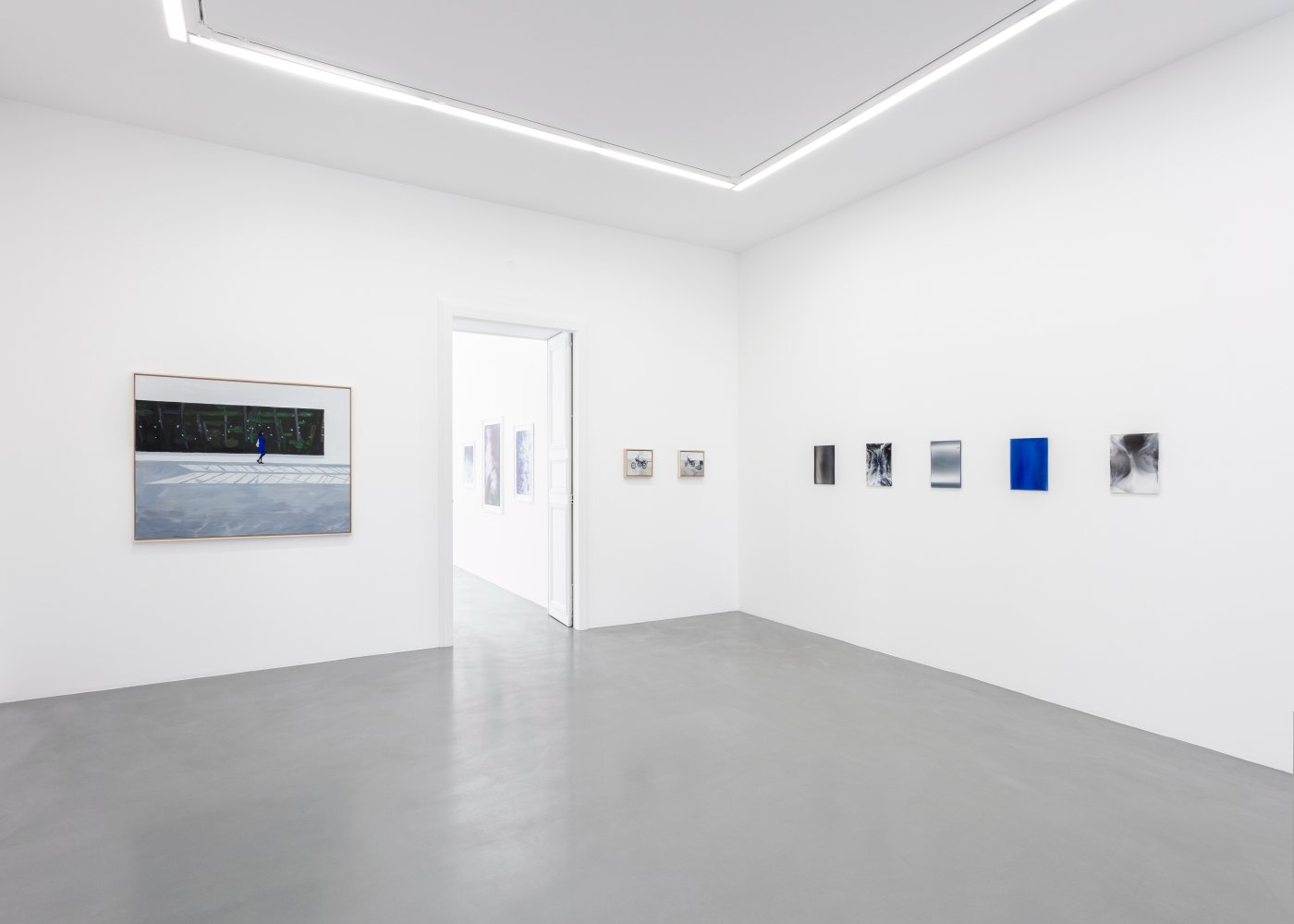 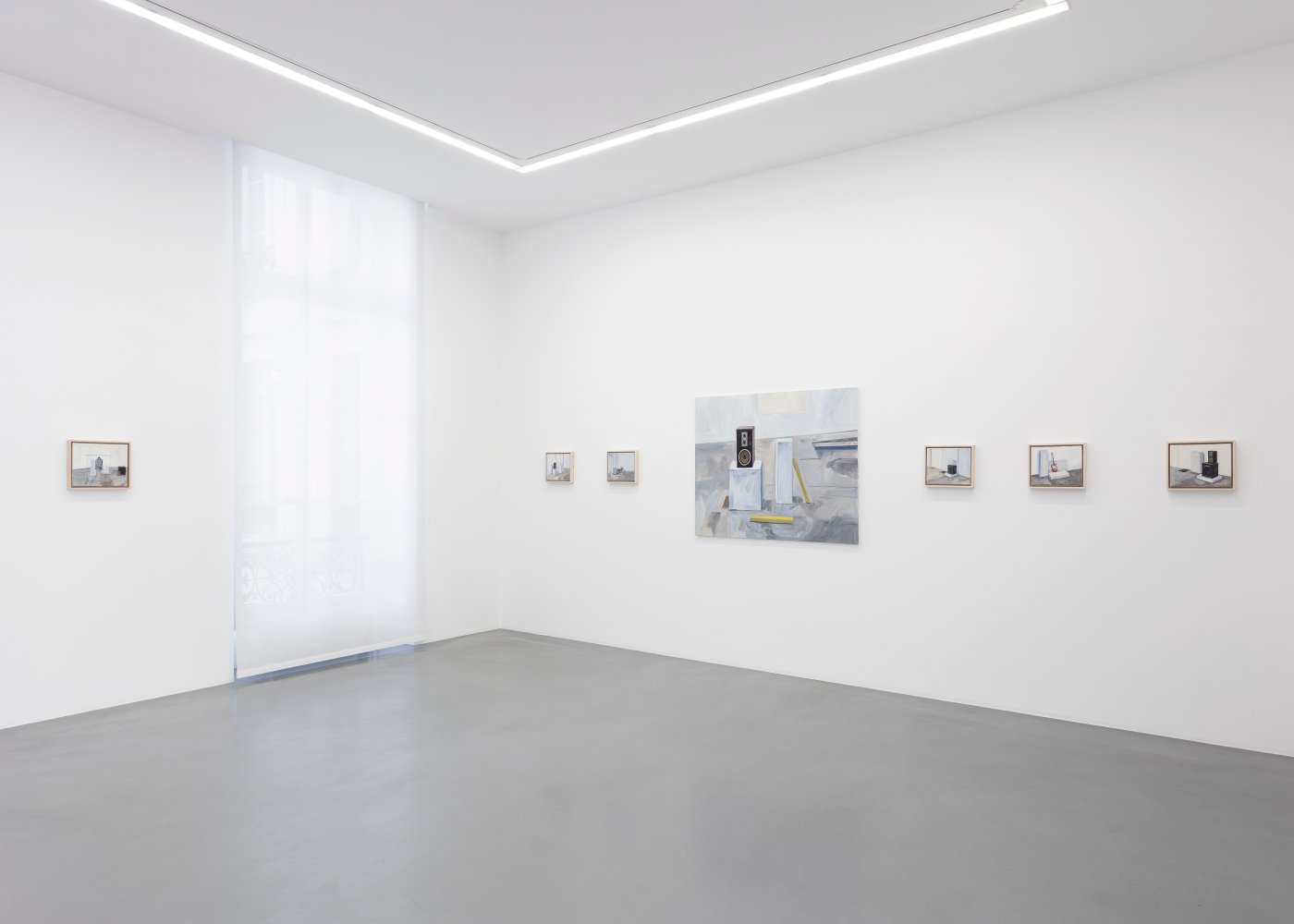 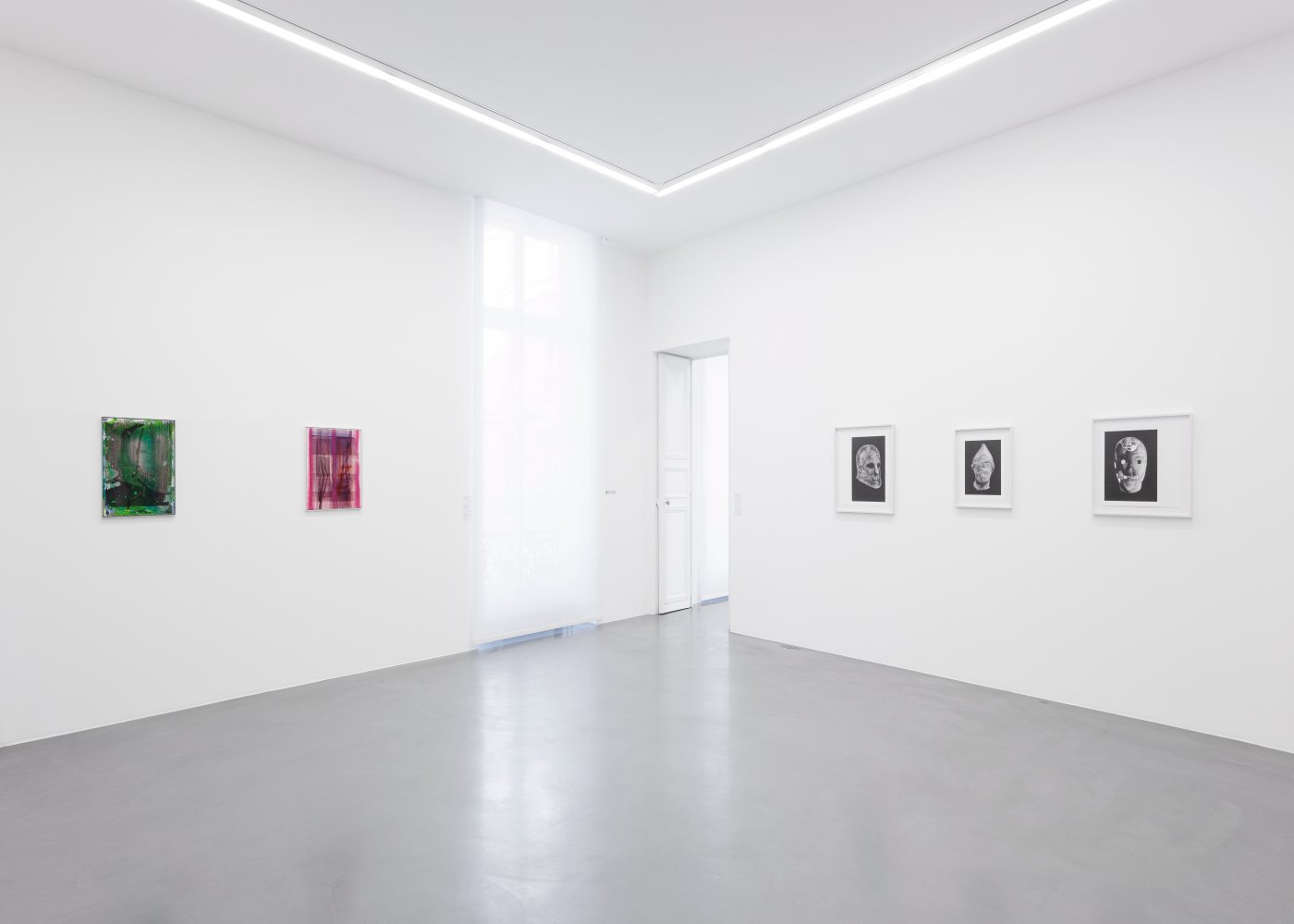 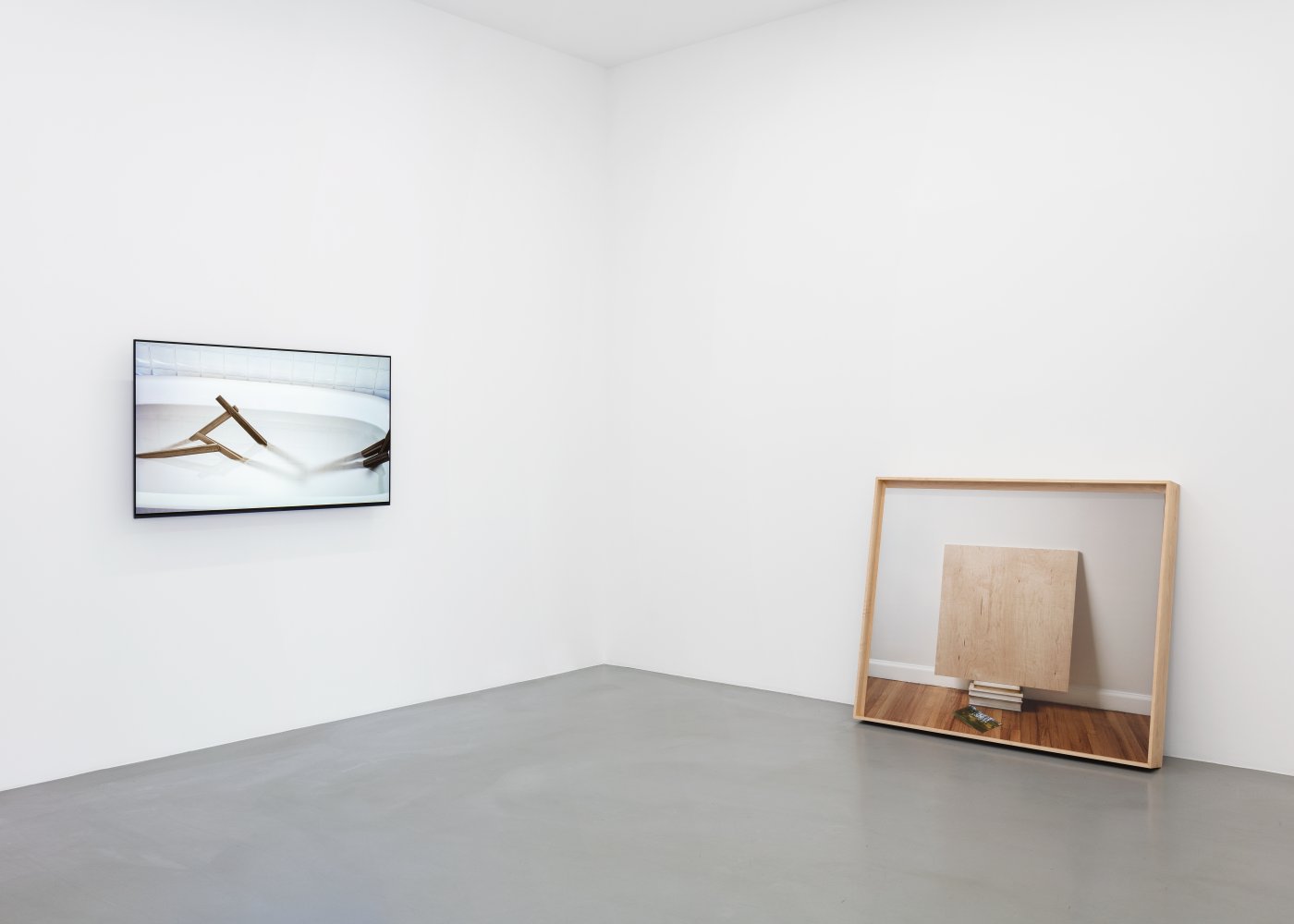 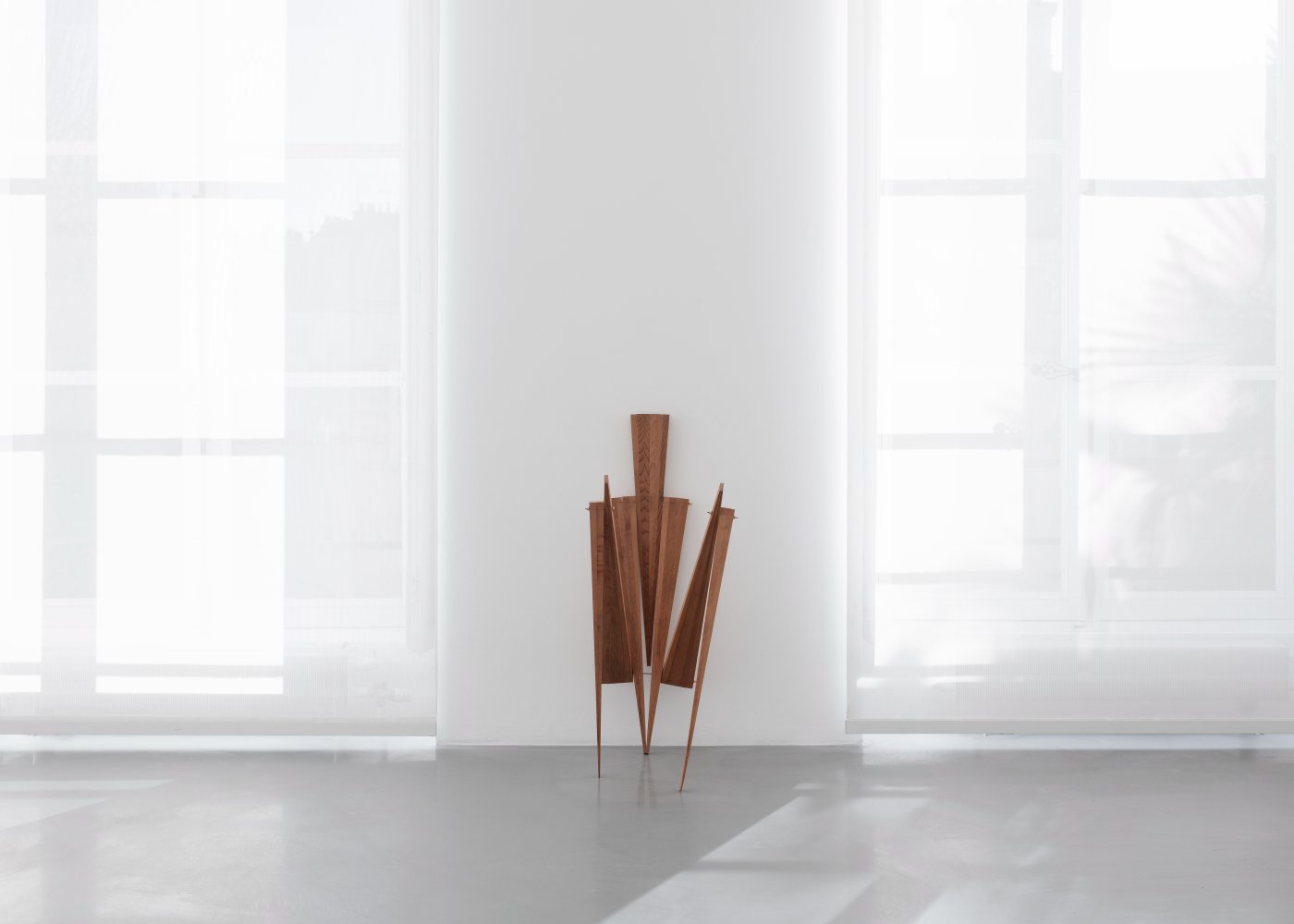 In the ontological sense, to dwell in a house is not merely to be inside it spatially, rather it is to belong there, to have a familiar place. Participating artists — Liam Allan, Jean-Philippe Delhomme, Leslie Hewitt, Denise Kupferschmidt, Fared Manzur, Joseph Montgomery, Ann Pibal, Julia von Eichel, and Carrie Yamaoka — each explore the notion of dwelling through three distinct practices: work created in the studio, through digital space, and on site.

In the Studio
The title of the show stems from an artwork by Fared Manzur, a Miami based artist who will make his New York debut in Dwellers. Manzur’s studio is located in the Rice Hotel, a historically significant structure built in 1905 in downtown Miami that was left vacant for decades. The clean, minimalist lines of Manzur’s paintings and sculptures are in direct contrast with the hotel. The exhibition’s namesake work, Dweller, is a horizontal monochromatic yellow painting that lies flat on the floor, adorned with a clay sculpture of an insect resting on its surface, symbolizing a species endemic to the space.

Ann Pibal, working from Vermont and Brooklyn, will contribute a new series of near-monochrome paintings, which over the span of the group evoke an evolving, fading depiction of glowing light. The use of metallic and iridescent paint, (silvers, golds, and bronzes) adds a sensual element which directly interacts with the exhibition space, reflecting both the ambient light of the gallery, and the movement of viewers through the evolution of color across the panels. The central motif of these works is a rectangle which in its proportion echoes the format of the painting overall. Diagrammatic representations of books or volumes in each image extend the reference to time – allowing an apparently neutral shape to evoke not just the phenomenon of fleeting, transitory, light, but the mutability of understanding.

Working from a residential home in Brooklyn, Julia von Eichel crafts large-scale organic forms that evoke the studio space itself. Stained with splashes of acidic colors, Eichel’s works on view in New York stretch beyond the canvas, spilling out into the surrounding space. Constructed from a variety of materials — including a complex armature with wood dowels, wiffle balls, string, and thread covered in silk — each wall relief is a controlled force, imbued with a sense of struggle and imbalance. The pastels on paper and mylar exhibited in Paris evoke a similar vital growth with repeated gestures and layering filling the surface.

Emphasizing the high ceilings of Perrotin New York’s gallery spaces, Carrie Yamaoka will present disarmingly obtuse reflective surfaces. Yamaoka is interested in the tactility of that which is barely visible, as well as the very real chain of incidents that determine an object. Her process consists of rubbing the wall with mylar and pouring resin, which creates a mirror surface that records the artwork’s journey, from an industrial loft in New York to its final gallery space. The viewer’s blurred reflection becomes part of the work. In Paris she will present a series of five wall works, consisting of cast flexible urethane resin.

Denise Kupfeschmidt will present a series of new paintings that include repeated figures or graphic architectural motifs, created from her Brooklyn studio. The motif of the sun, seen in Day Night Repeat as well as other works, reference the comfort of a repeated daily routine and the stability of a normalized existence — offering a counterpoint to our ongoing collective feeling of sadness and loss. As the artist says, her paintings “watch the earthly elements of home morph into something that feels remote, while we stay put.”

Digital spaces
Scottish born, Brooklyn based Liam Allan will debut his practice for the first time in the United States, presenting work that moves between digital and physical environments. His drawings, carefully rendered in pencil on paper, begin with digitally reconstructed contemporary artifacts, which he then edits and distorts in an attempt to subvert the authenticity of the depicted object. Their forensic acuity suggest an exploration of the real mediated by the digital.

Using a simple unit, wood shim, as a form of ready-made material, New York-based Joseph Montgomery generates wall paintings that are at once rhythmic and architectural. His abstract, digital sceneries are occupied by schematic dolls, acting both as animation and physical sculptures that create anthropomorphic compositions. The artist will concurrently present a new video and several large-scale doll sculptures that will revert the grand scale of the exhibition space into an architectural model.

On site
As a painter of the real, Paris and New York-based Jean-Philippe Delhomme’s practice revolves around being present in a place, working directly from his eye and never from photography. In New York, the artist will introduce landscapes recently painted in Greece. Central to the landscapes are vernacular dwellings: simple houses by the sea, centuries old, that convey a sense of perennial continuity. Concurrently in Paris, Delhomme will debut a new series of paintings that depict the interior of a large studio he occupied in Asnieres for a period of time. Scattered around the empty space, pedestals, speakers, a motorbike and other objects evoke a sculptural installation.

Leslie Hewitt will introduce in New York a new series of diptych photo- sculptures. Realized in Marfa, Texas, the works take the sky and light reflections emitted from Dan Flavin’s untitled (Marfa project), a permanent installation at the Chinati Foundation, executed by Flavin in 1996. This presentation of works offers a prelude to a project Leslie Hewitt is developing for Dia Art Foundation next summer at Dia Bridgehampton, which also houses the Dan Flavin Art Institute. Both lyrical and controlled, they extend, as Hewitt says, her work’s “relationship to the entanglements of optics, physical space and light.” In Paris, one of her signature leaning photographs will be presented along other wall works.

View of the exhibition "Dwellers Part II" at Perrotin Paris, 2022. Photo: Claire Dorn. © Courtesy of all the artists and Perrotin