Timothy Taylor presents Dubuffet/Chamberlain, an exhibition of works by American artist John Chamberlain (1927-2011) and French artist Jean Dubuffet (1901-1985). Bringing together two canonical artists of the post-war period, Dubuffet/Chamberlain places a series of Dubuffet paintings from the 1960s-80s in dialogue with one large-scale floor sculpture and two pedestal sculptures by Chamberlain. Together, they reveal the stylistic diversity and shared concerns in two successive generations of American and European expressionism. 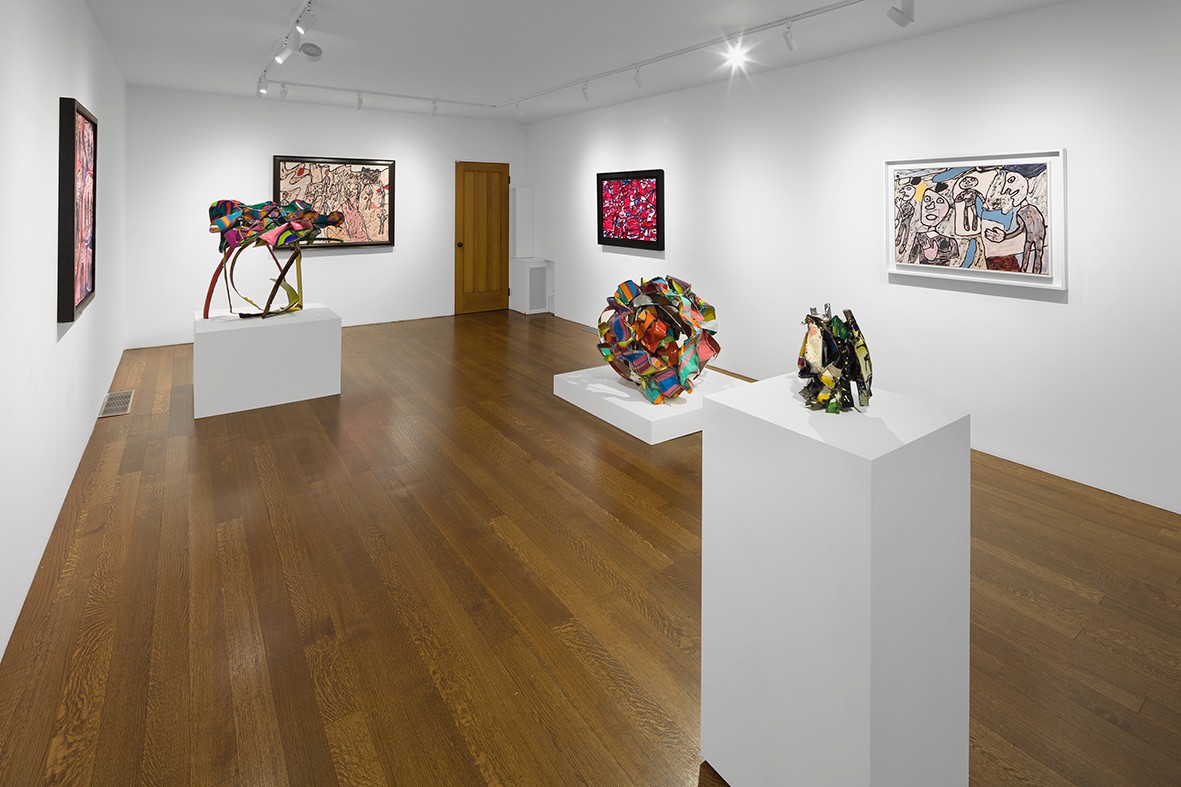 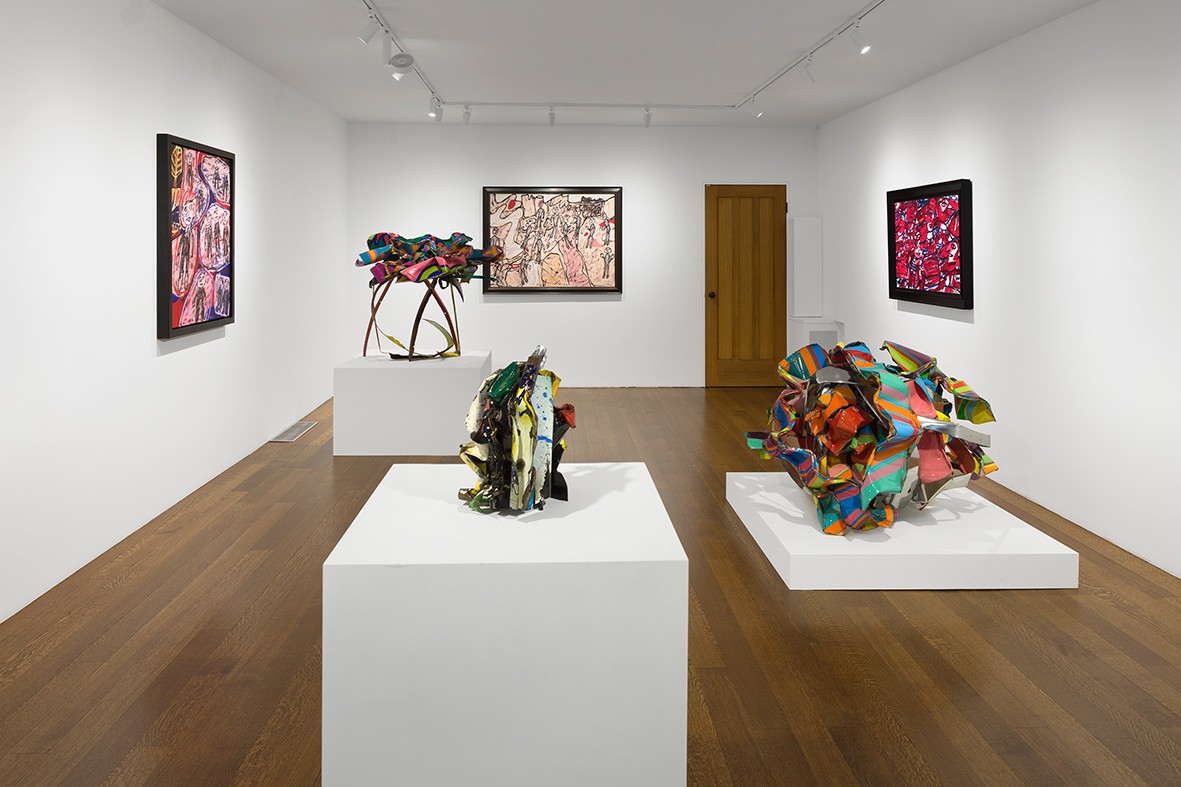 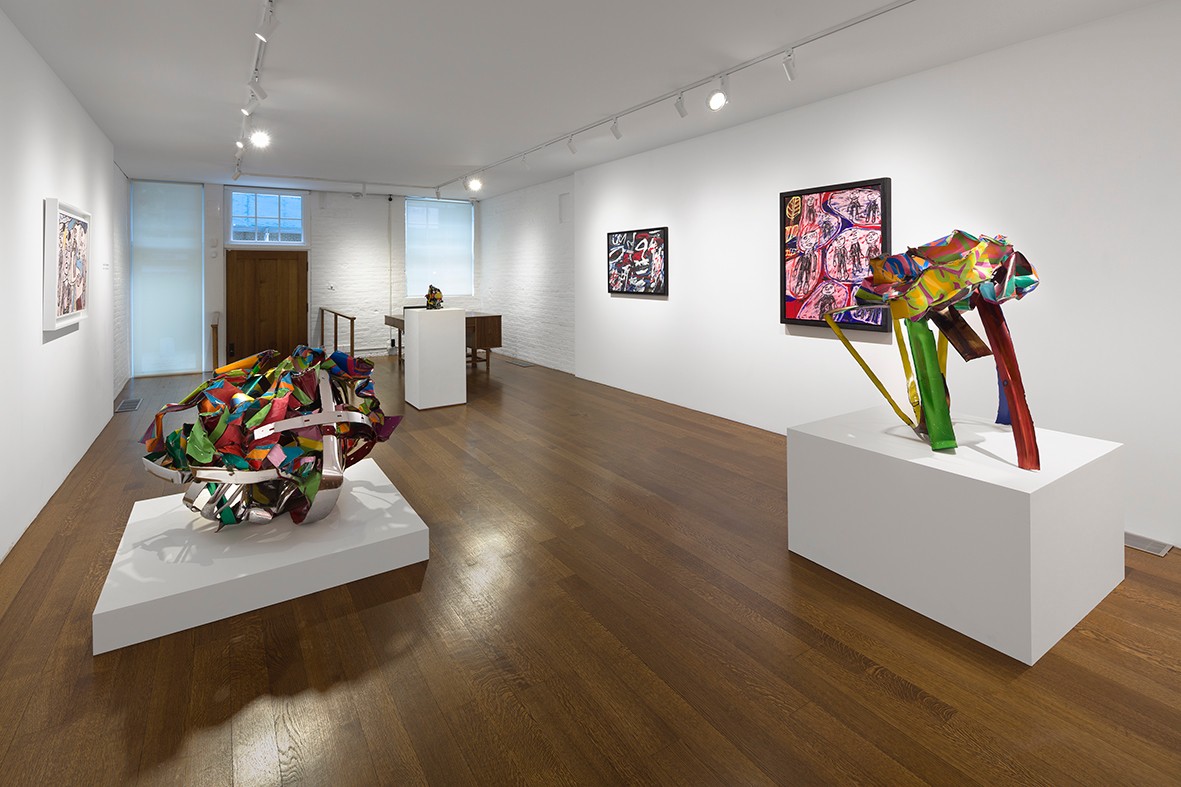 Born twenty-six years apart, Dubuffet and Chamberlain were both deeply influenced by the urban atmosphere of Paris and New York in the aftermath of post-war expansion. During the 1960s, metropolitan Paris underwent significant construction and urban transformation, a phenomenon that fascinated Dubuffet and continued to shape his paintings throughout the final decade of his life. In these late compositions, Dubuffet addresses the city as both a physical site and a metaphor for the tangled workings of the mind: in works such as Site Aléatoire avec 6 personnages (1982), references to traffic jams, rush hours and faceless everymen dressed in suits suggest both the mundane reality of living in a city and the existential loneliness of anonymity. Scrawled figures, set closely together in disorderly pathways, suggest the twisting and turning of anxious thoughts even as they actualize the chaotic feeling of living among the crowd.

While Dubuffet used allusions to urban architecture and corporate clothing to summon the streets of a changing Paris, Chamberlain’s exuberant tangles of metal tear apart the prefabricated American vehicle. Metallic ribbons reflect lightoff smooth surfaces in bright industrial paints, calling to mind the speed and appearance of cars zooming around agigantic spaghetti highway. Both sought to embody the frantic energy endemic to the post-industrial era in their work: seeking to free themselves from the constraints of academic teachings, they embraced asymmetry and a freewheeling approach to color, line and genre.

In their efforts to create art beyond the strictures of traditional art histories, both Dubuffet and Chamberlain drew inspiration from street art in their late work. Chamberlain alternately used galvanized steel and crushed automobile parts to form his sculptures, which he then painted using industrial car paints in a drip-drop technique, drawing comparisons to his Abstract Expressionist peers. Yet in his final works, Chamberlain’s approach to color evolved to reflect the changing face of his surroundings. The central work in this exhibition, Knot in the Cards (2001), is a twisted assemblage of contorted strips of metal, painted in rich shades of blue, pink, cadmium yellow and tangerine that evoke the neon colors of road decals and graffiti.

While works such as Champ Psychophysique recall the raw, crudely outlined Art Brut approach to figuration he had realized in the 1940s, Dubuffet began to simplify his color schema to a refined number of brilliantly colored paints and pigments, often outlined thickly in black. His late series see Dubuffet scrawl shapes and figures wildly across the canvas,and his compositions became increasingly expressionistic and abstract over time.

Chamberlain called one series of work ‘a self-portrait of my nervous system,’ a phrase which equally applies to Dubuffet’s surreal figurative scenes, conceived to dissect the human id to its most basic and primal impulses. From Chamberlain’s intricate clumps of metal to Dubuffet’s tangled webs of figures, both artists’ work can be seen as a kind of self-portrait: gestural, emotional and self-reflective.