The five artists included in this exhibition – Kate Lyddon, Alice Maher, Richard Mark Rawlins, Caroline Wong and Joel Wyllie – are using the slow processes of drawing to work through deeply personal experiences, anxieties, and desires. Drawing is agile enough to move across different periods of the artists’ lives: backwards, to recollected experiences; inwards, to excavate things that are hidden or obscured; and forwards, to new forms that arise through the process. Ostensibly modest practices – drawing, erasing, redrawing – can produce unimaginable beings and worlds that can surprise even their makers. 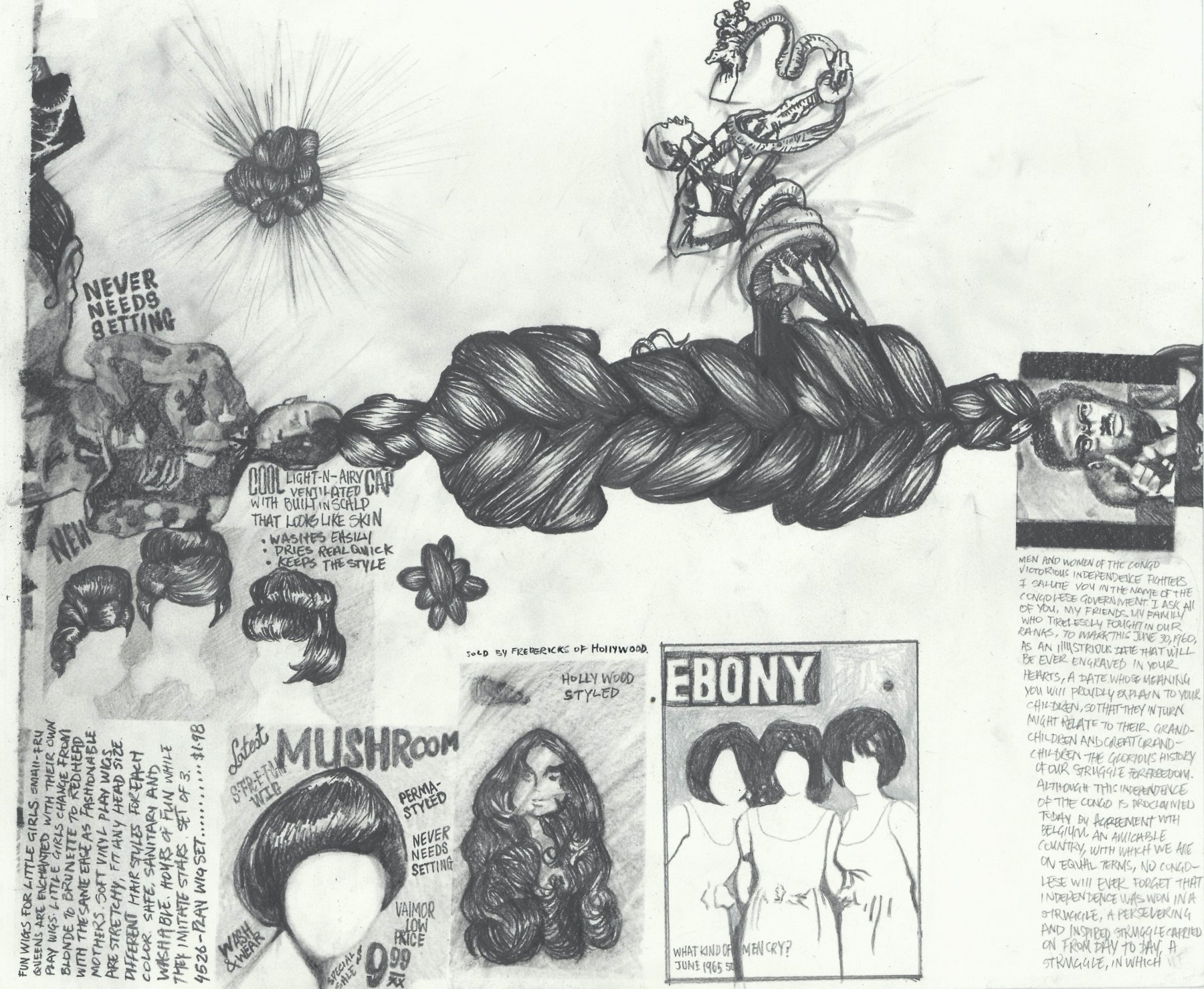 Trinidadian artist Richard Mark Rawlins uses drawing to examine and make accessible research into his country’s history of colonialism and inequality. His contribution to the exhibition is Like a Rope (2019-20), a drawing made in charcoal that is over fifteen metres in length. Rawlins uses the rope as a metaphor to draw a continuous line from the security rope he observed when attending the Trinidad and Tobago Carnival in 2019 to a range of imagery; the rope forms nooses, conjoins figures, and morphs into script, producing a narrative that links Rawlin’s history with that of fellow Trinidadians, his family and his ancestors. His chosen medium, charcoal, is key to the project, its unruly dust constructively contaminating every part of this captivating project.

Caroline Wong’s drawings recollect the pleasures of eating and drinking with friends, celebrating conviviality whilst also critiquing sexism in East Asian societies. Finding inspiration in the creaturely drawings of Paula Rego, the women that Wong depicts in Scavengers (2020) take on the attributes of cats, unashamedly lying on the dinner table, licking plates, and sleeping off the consumption of an excess of food and drink. Wong uses Sennelier oil pastels that she describes as ‘soft, sticky and buttery’; they evoke a sense of gluttonous pleasure, leaving a greasy residue on her hands as she works, like that left after eating a meal with your hands. Wong lived in China for five years and is trying to bring the chaos and clutter, the heat and humidity, of Asian cities into her drawing.

Joel Wyllie’s drawings are distinguished by multiple lines that teem, swarm and gather into forms that are significant for the artist. The myriad lines he lays down seem to grow out of the paper and resemble the beauty of the natural world, such as fish scales or the feathers and eyes of birds. Wyllie’s drawings play with illusion and perception and are simultaneously stage sets relating to lived experiences and portals to another, unknowable and unnameable world. Science fiction is important to him; Wyllie is ‘looking for things he hasn’t seen before’, using erasure to ‘see marks in what I’ve erased’.

Alice Maher also uses erasure to ‘find the shape of the figure’; her shapes develop with the drawing rather than being prescribed beforehand. In a new series of large drawings, titled The Bird Mistress (2020-1), Maher uses the body – her body – as a vessel to explore inner sensations and worlds. The process of drawing, erasing and redrawing is a search for a particular atmosphere or energy which articulates inchoate feelings and sensations. Much of Maher’s work draws on mythology; in this series, the bird-like imagery is used to suggest a connection between our world and that of beyond – a way also for the artist to process the recent loss of two of her closest friends.

The works of Kate Lyddon are made through a constant flow of thinking, imagining, free association and drawing. Ideas and found imagery may inform her works but it is through the process of drawing that new images appear, leading to further research and thinking. Her starting point is usually something observed from life but through a process of drawing, erasure, going over and reworking, new forms and strange, hybrid creatures emerge. Like Alice Maher, Lyddon’s work draws deeply on mythology but is also situated in the realm of the physical and bodily. She likes drawing because ‘everything you do leaves a trace’ and collage is also important to her for its sharp, graphic edges. Within one drawing she might combine pencil, oil and collage, producing imagery that equally celebrates the grotesque and the beautiful and calls into question strict hierarchies between the two.

This exhibition replaces Drawing Room’s Biennial Bursary Award, which was formerly awarded to one artist and took the form of a month-long residency at Drawing Room. This year we have increased the award and divided it between five artists, each of whom has contributed to Drawing Biennial 2021.