Don’t Fuck With Our Human

Don’t Fuck With Our Human


Fabian Lang opens the new season with the exhibition “Don’t Fuck With Our Human”, featuring the works of six unique artists. 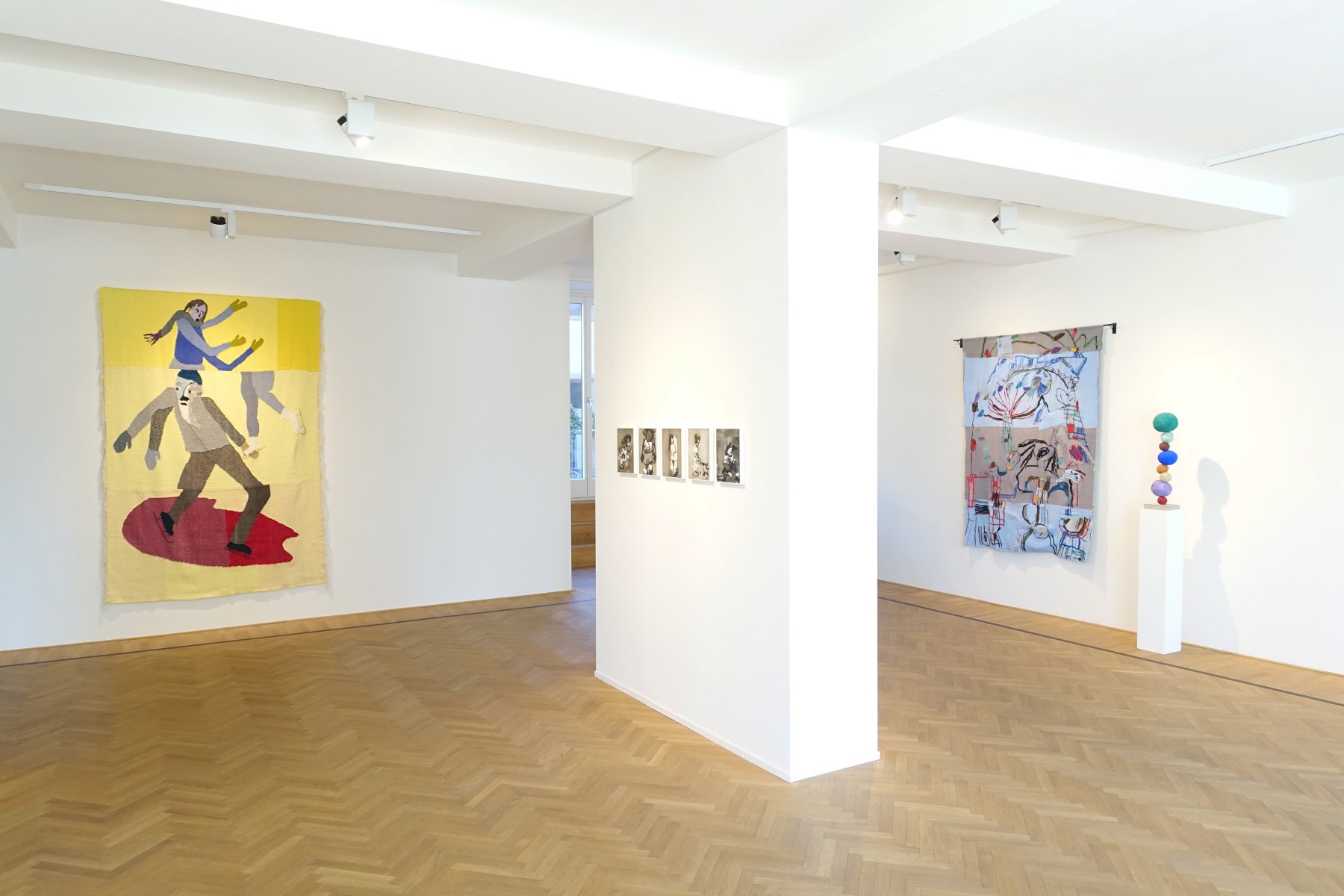 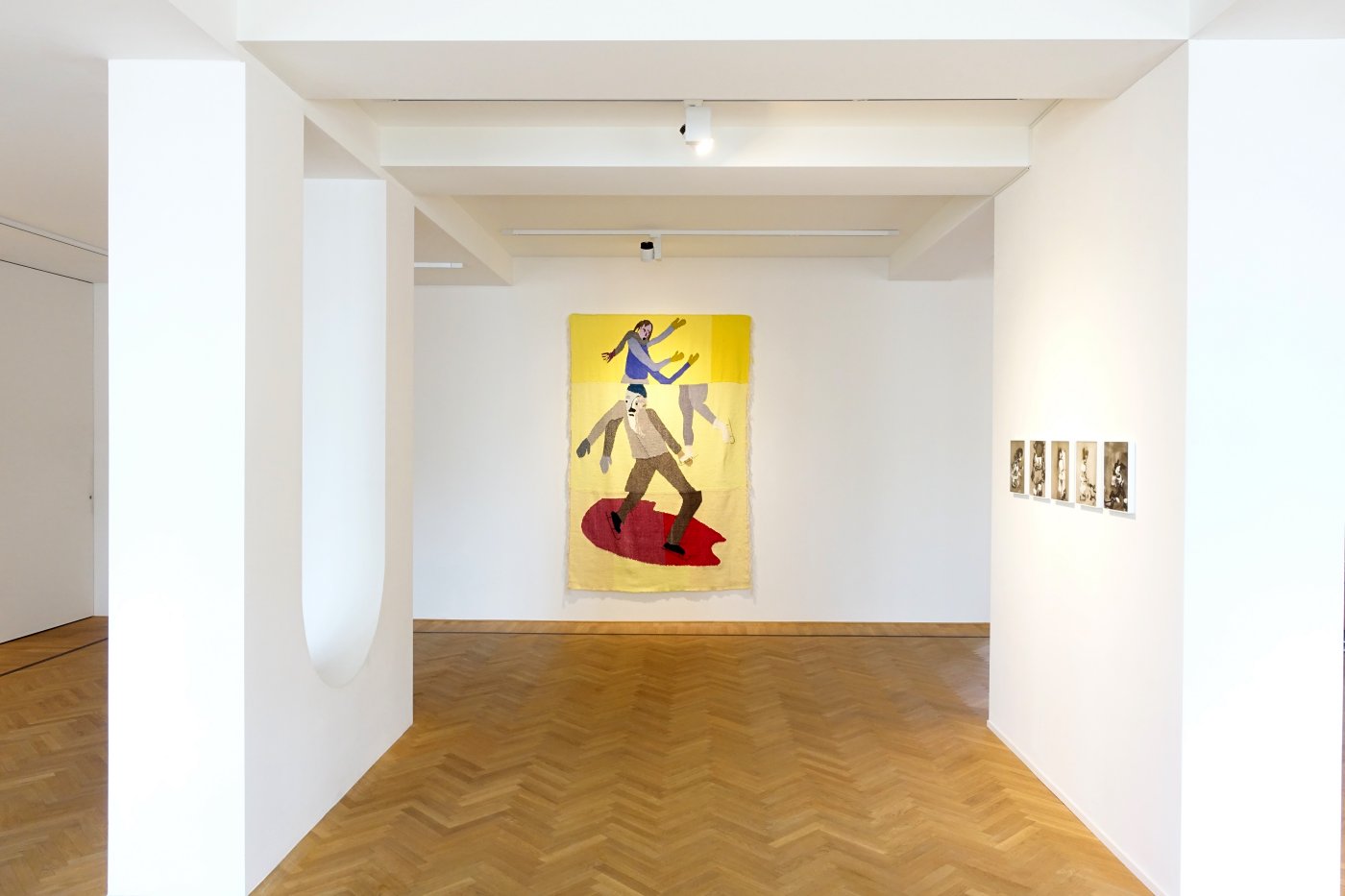 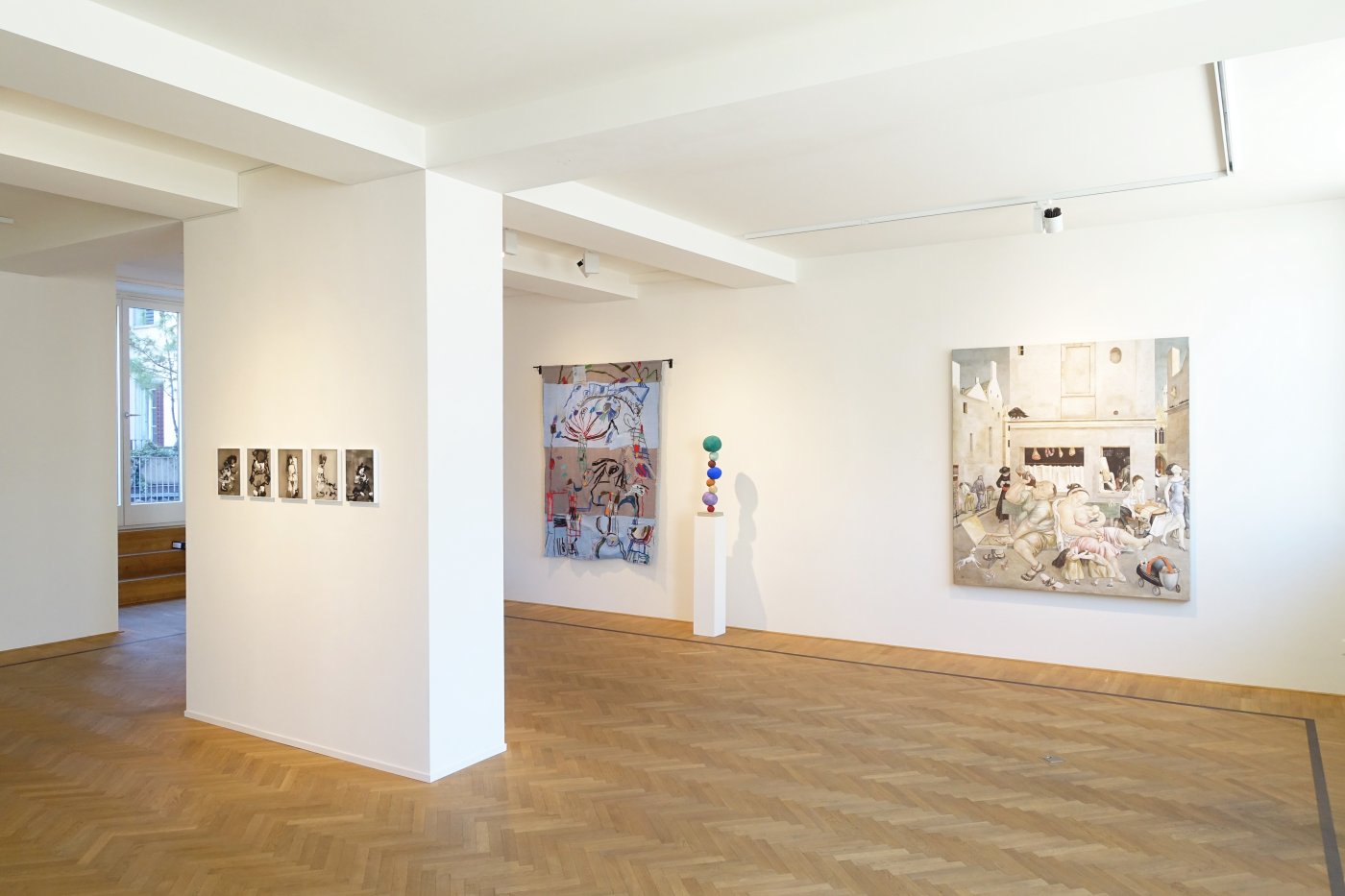 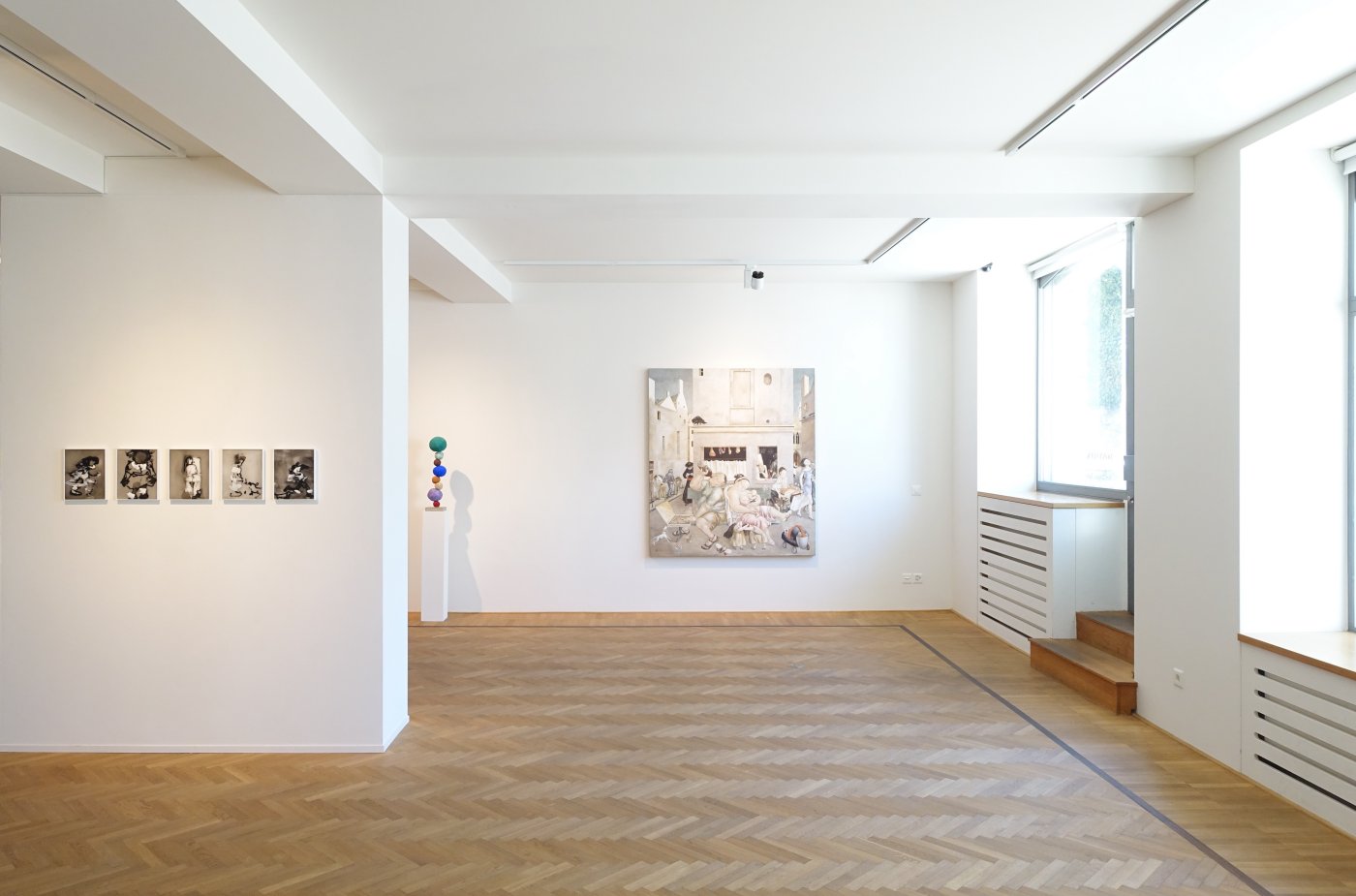 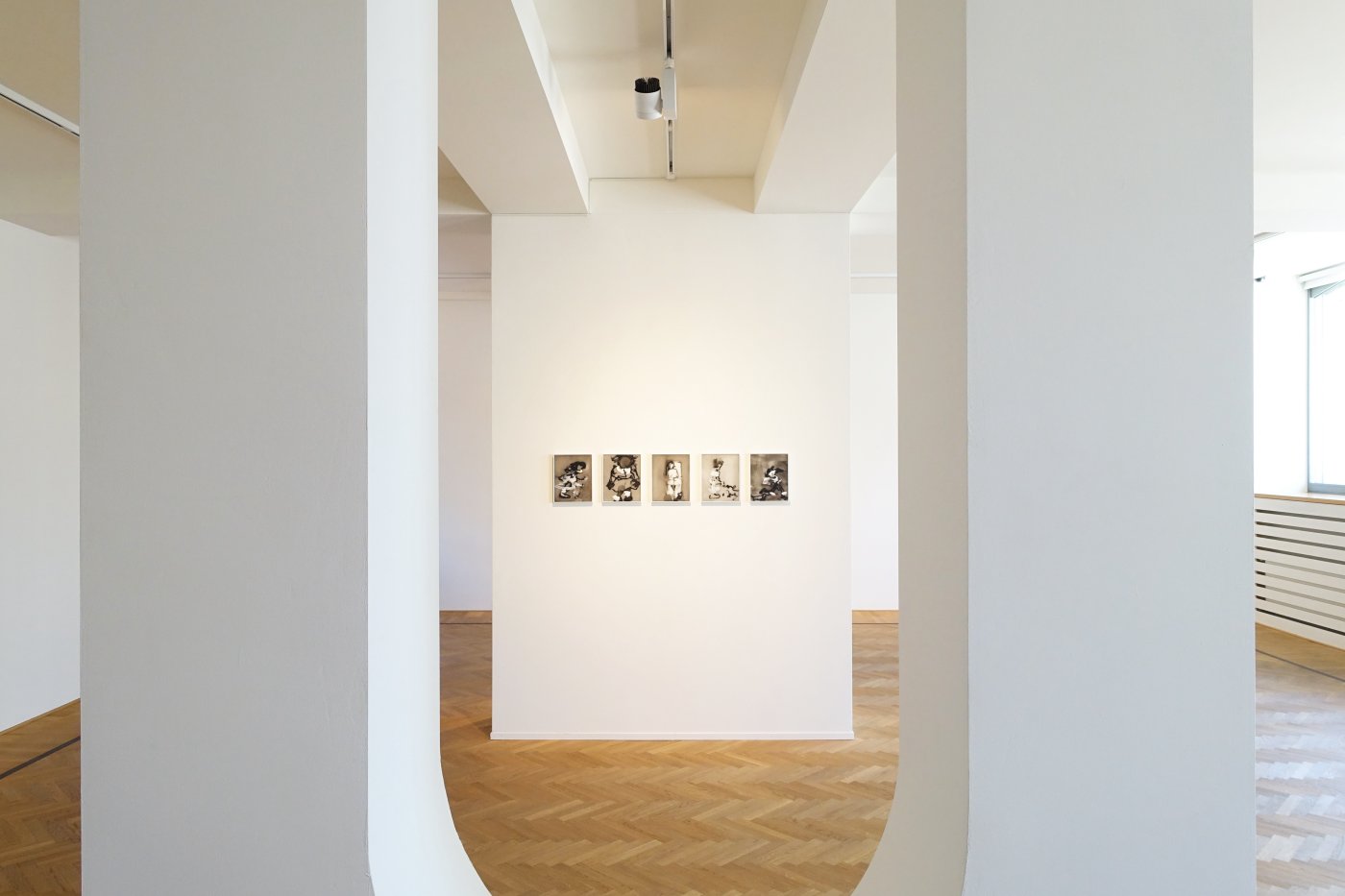 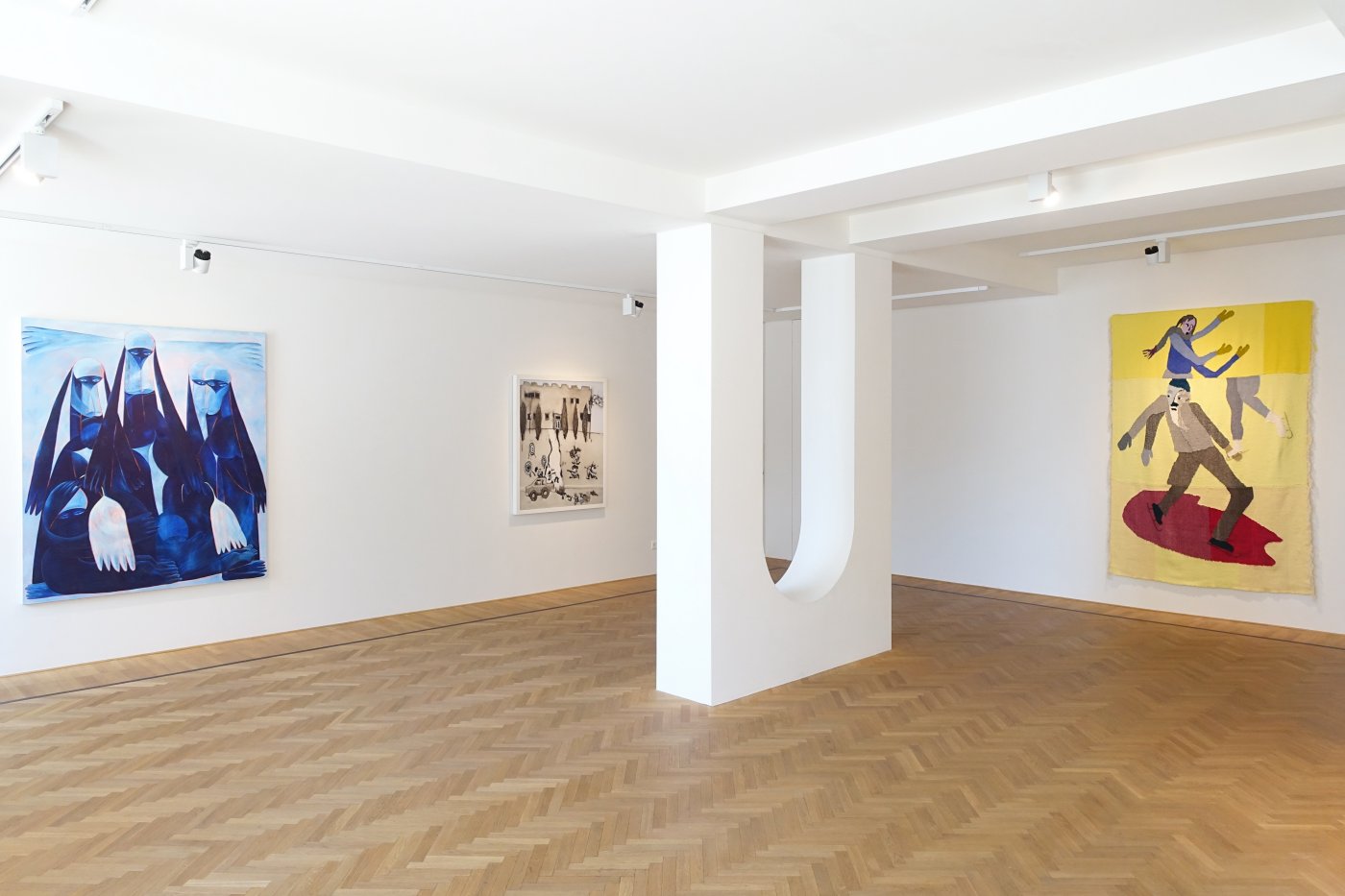 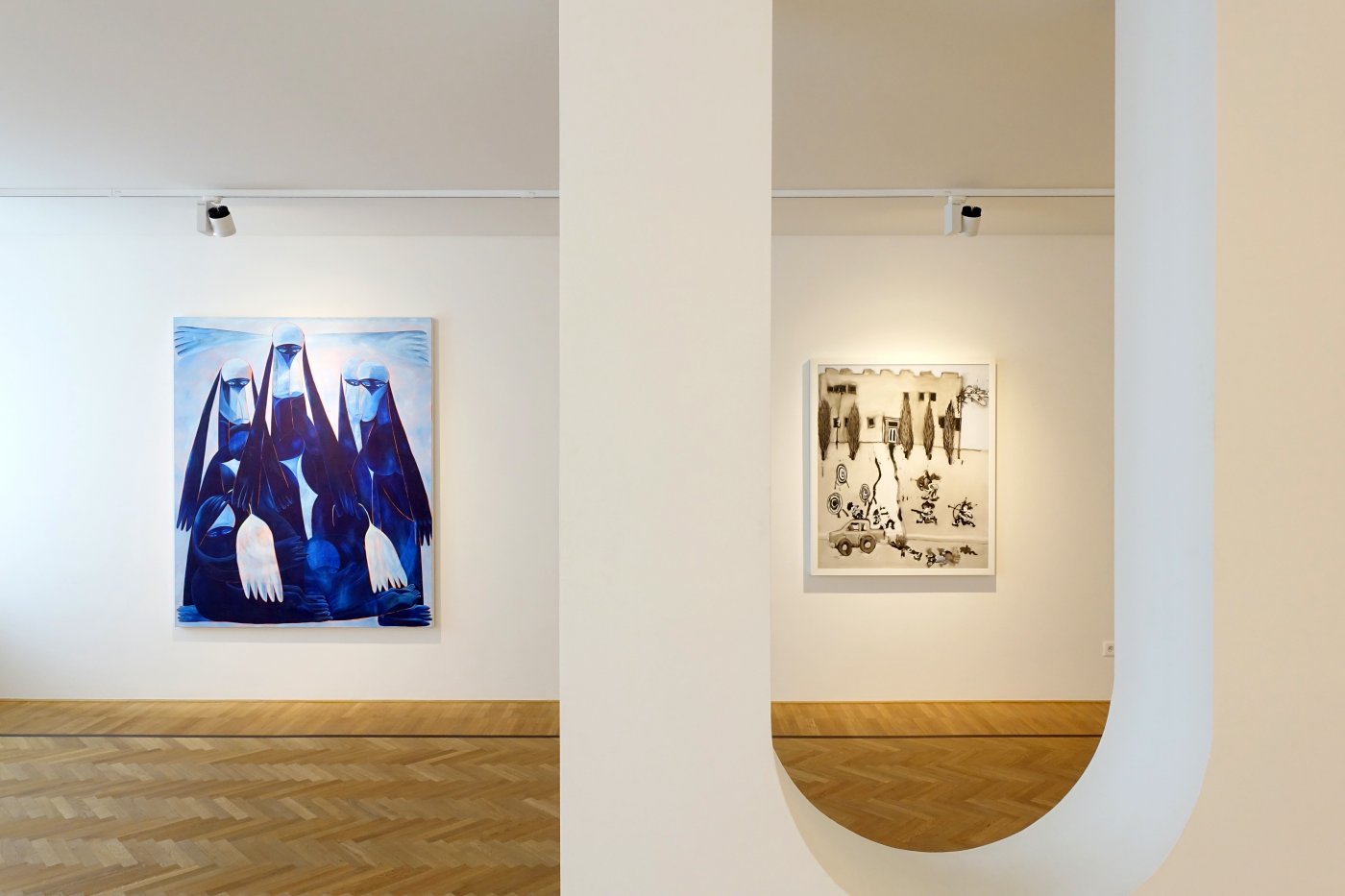 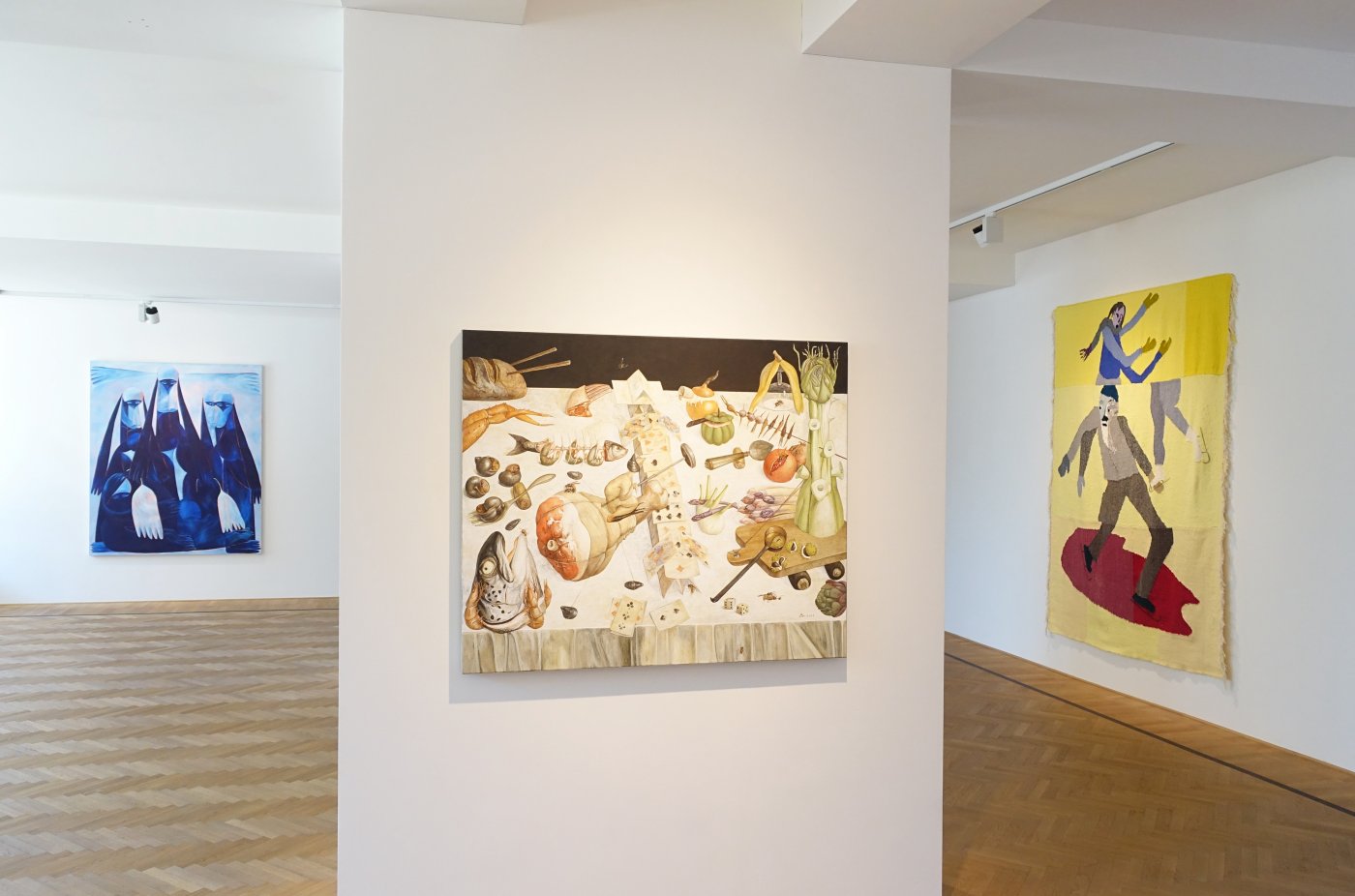 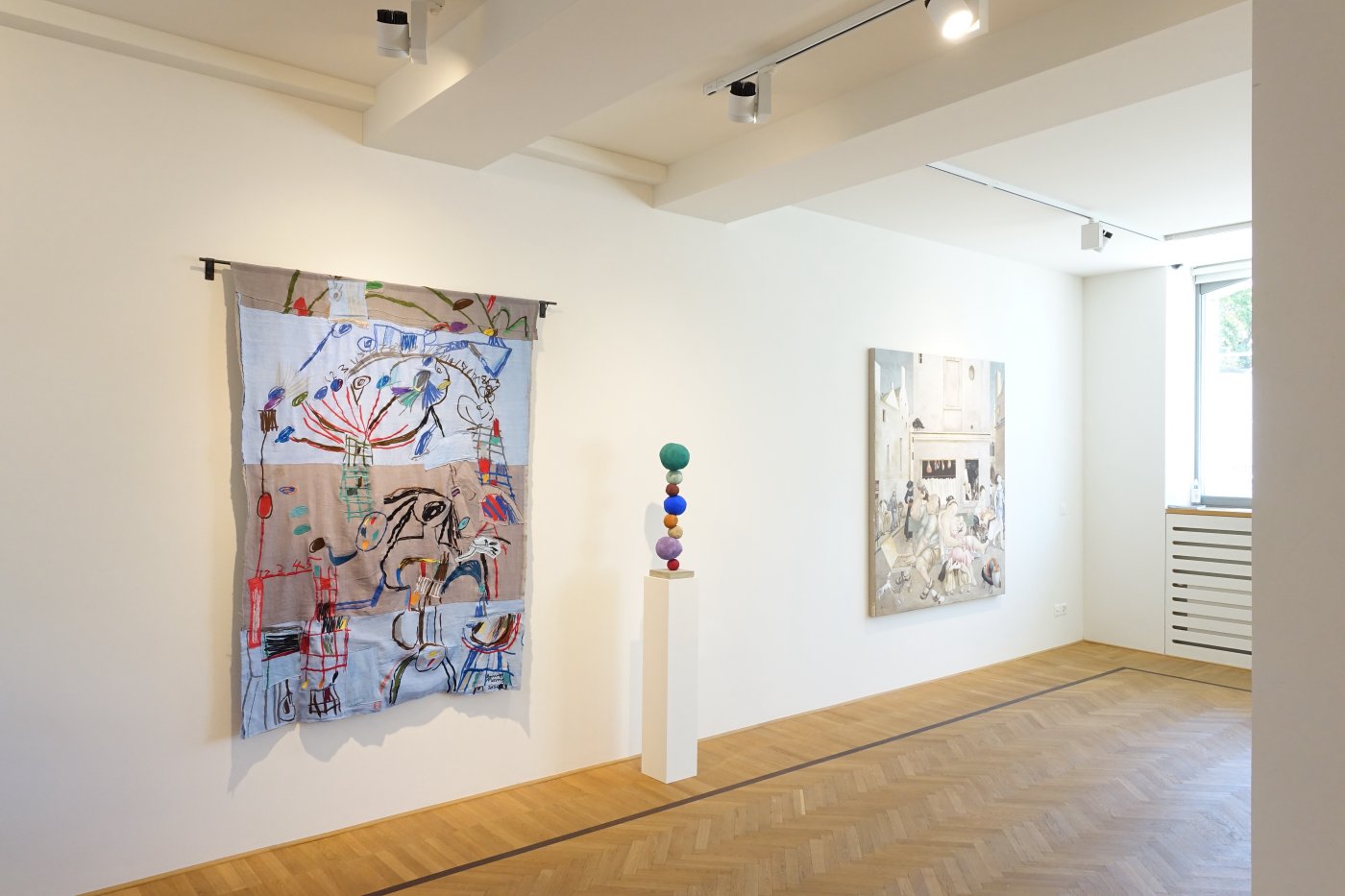 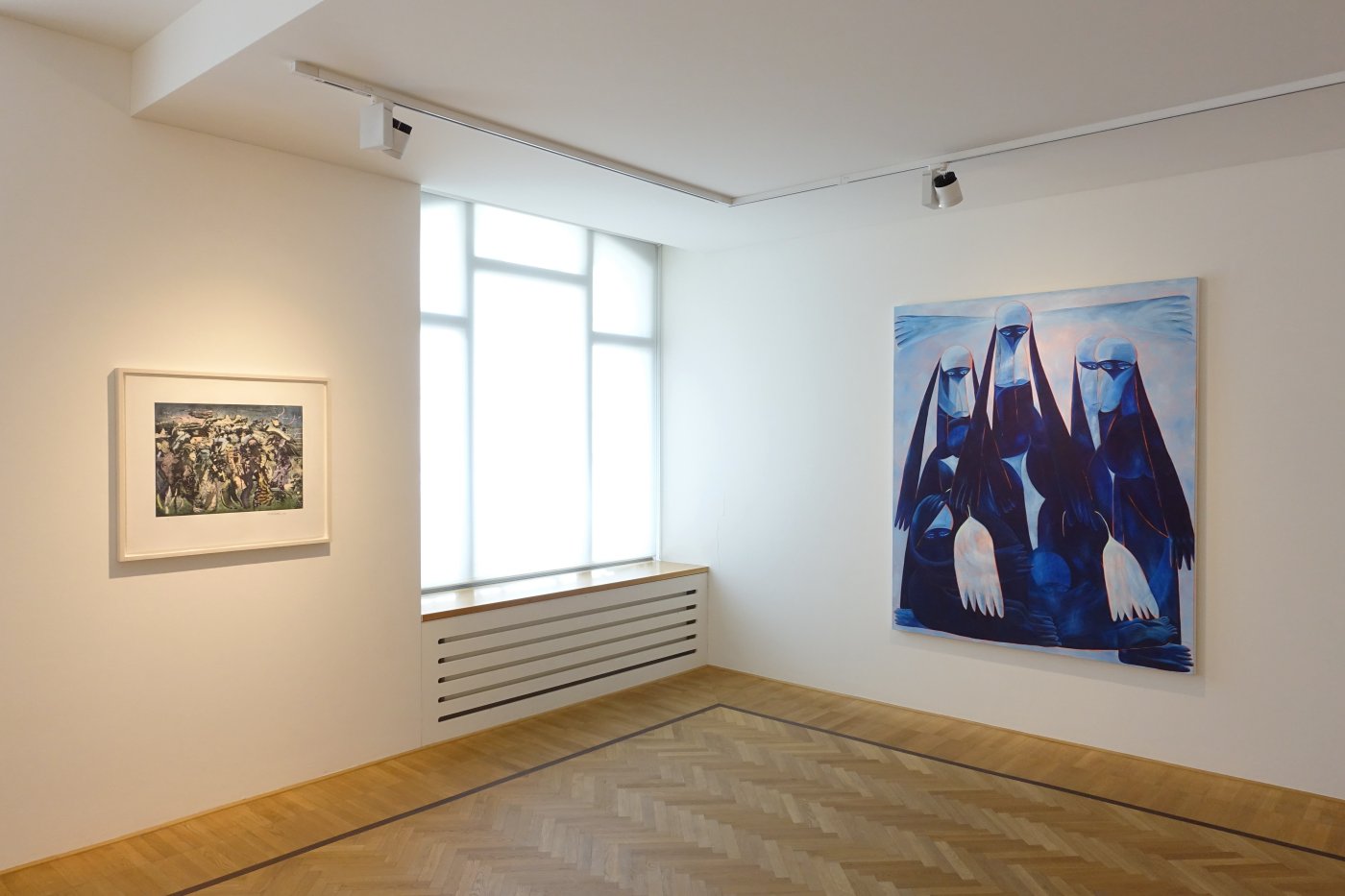 What they all have in common is an extraordinary way of telling stories. In the works, which are so different in style and media, fictions and truths of our present-day realities intermingle. Without any didactic polemic, but always with an ulterior motive, dramatic escalated conflicts emerge in the works. The grotesque and a zeitgeistical Weltlärm (world noise) is prevalent here, but no more or less than as a celebration or at least part of life. How closely the three can be connected is human. Because everything may or should also be, in this day and age. Mind numbing simultaneity. Everything goes but don’t fuck with our human. Human beings observed from above, why not from the point of view of another being!?

This is what happens in Tahnee Lonsdale’s work. With a minimal palette of bold, gestural brushstrokes, Lonsdale creates mystical figures towering totemically over you. A sort of celestial entities that act as guardians over the metaphysical. Often Lonsdale’s tableau shows fragmented manifestations of a single being, suggesting an inner multiplicity. In «Don’t Fuck With Our Human», from which this exhibition takes its name, Lonsdale speaks of a first-time warrior energy of her celestial tribe, guardians, angels, ancestors…”or whatever you want to call them”. The work explores the idea that we are never alone, even in our deepest despair we are guided and protected. Some believe this happens at the hands of gentle, nurturing souls – but with her painting,, Lonsdale challenges the idea of loving guidance and asks whether we might be protected by a “don’t fuck with us” tribe of heavenly warriors.

As if Lonsdale’s creatures are witness to our own warlike nature, Kim Dingle’s work called PAINTING BLINDFOLDED (gangs of cypress park), actually shows rival “war tribes”. An incredibly dramatic, almost epochal war scene of an attacking girl gang unfolds before us. The work combines Dingle’s clear conceptual approach, her sense of humour, anarchy and moral reflection. The focus is on the contrast between the children she depicts and the unruly, adult behaviour they engage in. The artist’s long-time alter ego, a chubby-cheeked girl in a smock apron named Priss, reappears in this work, leading a devastating crusade with her friends in a war-torn like landscape.

Throughout her career, the image of the misbehaving girl has remained a linchpin of her work. In fact, Dingle has explored this theme so intensely that she recently declared she could paint these works blindfolded. And she did, relying on her muscle memory and intuition, often filming herself. “FYI, too, my studio is right on the border of two warring gangs in Cypress Parks. They are known as the “Avenues Gangs” and there are certain things I avoid so as not to get killed.”

In Annie Morris’s work, too, the intuitively automatic takes on an overriding significance. The artist transfers her drawings of almost automatically subconsciously created exalted strokes, gestures, surreal figures, flowers, trees, geometric grids and cryptic signs into yarn. The drawn line is reproduced with a sewing machine on unstretched linen. A process of slowing down sets in, turning her textiles into something more akin to painting.

Colour plays an important role in all her work, linking her sculptures with her drawings and tapestries through a common colour palette of rich cobalt blues, burgundies, mustard yellows and earthy greens.

Richly populated situations and expansive imaginary landscapes emerge that bear witness to conflict, indulgence and phantasm. But Morris has little time for definitions; rather, she wants to invite the viewer to lose themselves in the landscapes of her imagination.

Christina Forrer’s tapestries are also made with yarn, but on a weaving loom. They are often disturbing scenes depicting naïve, wide-eyed figures in emotionally fraught situations and cartoonish conflicts.

His Position Is Not the Proper One for Him is a work in a series by the Swiss artist which poignantly illustrate angst and violent struggles. Three scenarios come to a head in a dramatic situation, as if one sees the event happening simultaneously from different angles. Is it a crime, is it an accident? What has happened here?

Nearby, the work enters into dialogue with Ali Banisadr’s work on paper. The painter creates frenetic, fantastic, often large-scale landscapes that evoke chaos, violence, displacement, memory, but also celebration with a flood of gestures and colours. With precise yet exuberant brushstrokes, he creates densely populated compositions inspired by mythology, art history, his childhood memories of Tehran during the Iran-Iraq war and his experience of synaesthesia. Nocturne is probably most reminiscent of an exuberant life-affirming carnival of dance and festivity.

Like Banisadr, Xiao Guo Hui also quotes the old masters Bruegel and Bosch as influences. In both of their works, a simultaneous, existentially absurd hustle and bustle is viewed from above. They draw on an encyclopaedic knowledge of the history of painting to create their own distinctive imagery. While Banisadr’s technique recalls the untamed energy of de Kooning’s abstract expressionism, Xiao’s paintings effortlessly fuse early Renaissance, Mannerism, ukiyo-e painting and Francis Bacon.

Xiao’s latest, and greatest, love is egg tempera. This seductively ancient technique brings radiance and transparency to his reduced colour palette, giving his paintings a special temperament. His compositions bear witness to an infinite patience, love of detail and a deeply rooted sense of equilibrium derived from the Chinese painting tradition. In addition to all the painterly seriousness, his works always have something playful about them. In the supposedly ordinary street scene of Une après-midi, small implications of lust, gluttony, greed, sloth, anger, envy and pride can be found everywhere. “I’m not sure if this is just a coincidence or an unintentional projection onto the canvas of thoughts I’ve long had about our society. The seven human actions were called the seven deadly sins in the age of religion. But what are they in our time?” asks Xiao.

The fantastically exaggerated or astutely precise, grotesque and allusive stories challenge and uplift. The participating artists work to produce objects and images that express a particular dedication to their chosen materials and craft. There is a confidence and inventiveness here that does not hide behind beauty, but masters its language in the service of what it wants to tell. All of them ask us to temporarily set aside our assumptions and engage with the story inherent in the work.