Derek Jarman: When yellow wishes to ingratiate it becomes gold

Derek Jarman: When yellow wishes to ingratiate it becomes gold 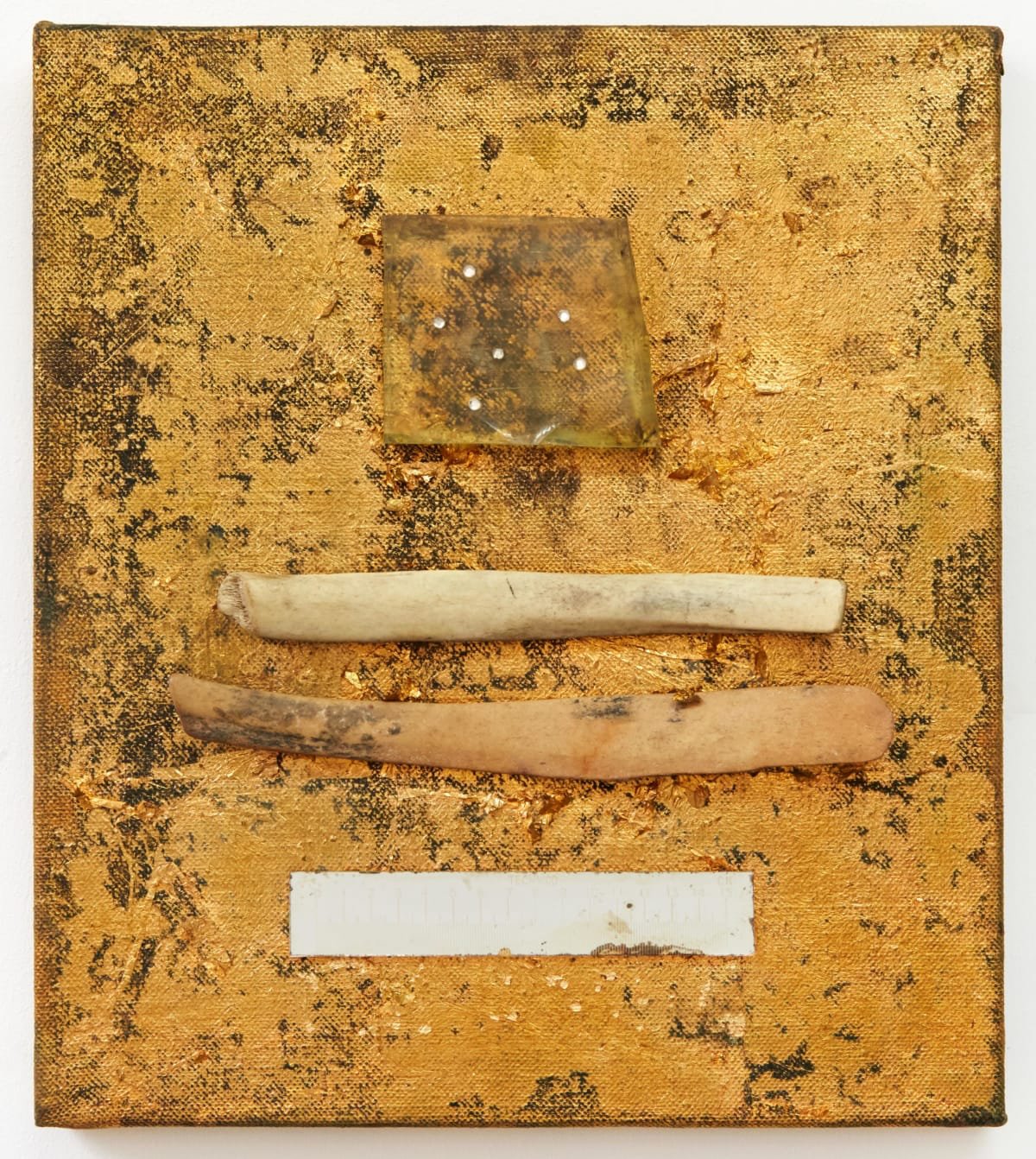 The title of this exhibition is taken from Chroma, Derek Jarman’s book on colour. It brings together paintings from 1982 – 1992, a rich and turbulent period in the artist’s life. The works illustrate the complexity of his practice, as these paintings weave a path through a creative output that included, during these years, film-making, writing, gardening and political activism. They signal particular interests in alchemy, 17th-century metaphysics and the politics of 1980s Britain. They also register Jarman’s personal history during a time when he met Keith Collins, the love of his life, acquired Prospect Cottage in Dungeness, and made his renowned garden there. This was also the decade during which he was diagnosed with HIV and publicly fought a pervasive homophobic attitude towards sufferers of the AIDS virus.

The exhibition opens with ‘Old Mortality’, one of a group of paintings originally shown together in 1982, which drew inspiration from alchemical symbolism, the work of Caravaggio and El Greco’s Pieta. Two large yellow paintings, also from the early ’80s, refer to time spent in Italy, reflecting Jarman’s love of that country and harking back to the landscape paintings and drawings he had made over the previous two decades. ‘Pleasures of Italy’ is replete with inscriptions, a habit Jarman borrowed from nineteenth-century painting, and include the scored words ‘lux, calme’. This is a reference to Matisse’s famous painting, an intimation of the pleasures of the Mediterranean, which in turn derived from Baudelaire’s poem, ‘Invitation to the Voyage’, in which the poet entices the object of his affections with the promise of a life of luxury, calm and sensuous gratification in the tropics. Jarman drops the ‘e’ from ‘luxe’, returning us to the Latin word for ‘light’ and the more purely optical conjuring of painterly delight under an Italian sun.

The exhibition includes work from the ‘black series’, which Jarman made at Prospect Cottage, as well as one of the powerful ‘Queer paintings’ made on copies of tabloid newspapers. This concise group of paintings, reflecting each year of this eventful decade, encapsulates the importance of painting in Jarman’s practice and his enduring commitment to the exploration of this medium.

Painted in the mid 1980s, ‘Untitled (England 11 and clock)’ and ‘Grievous Bodily Harm’, vent Jarman’s anger at the damage that successive administrations led by Margaret Thatcher wrought upon Great Britain (there is a play here between the contractions GB and GBH). In the latter painting Thatcher’s notorious ‘VICTORIAN VALUES’, repeatedly invoked in her political speeches, are cut across by Jarman’s own values, somewhat gnomically signified by the phrase ‘Night life’ (itself construable in more than one way). These paintings also dwell on his fear of nuclear annihilation during the arms race between the USA and the USSR, which led the USA to park nuclear missiles on English soil.

The series of ‘black paintings’ were made between 1986 and 1990 in Jarman’s studio in Prospect Cottage in Dungeness. The black paint in these works, according to Jarman himself, is redolent of the void, a realm of chaos and night. In several of these small paintings, panes of glass, engraved with words, have been pressed into thick waves of black paint. This series of works featuring found objects, often from the beach at Dungeness, remind us of the alchemical aspiration that objects in base metals, even when rusted and eroded, might be transmuted into gold. It’s as if, in contrast to his earlier landscapes as well as the later messy protest paintings, a new ‘objectness’ enters Jarman’s work. It was also around this time that he spoke of objects in his films (especially in Caravaggio) taking on a life of their own, becoming ‘living participants in the scene’.

With ‘Untitled (comb)’ and ‘Untitled (technico)’, the creation of gold as the achievement of the alchemist’s mystical purpose comes through very strongly. Alternately suggesting daytime and night-time scenes, each painting celebrates the psychological gold of knowledge and confidence, and do so all the more poignantly by virtue of the imperfections they contain. They tell us that psychological fulfillment, figured as alchemical gold, has been achieved through struggle. Imperfections persist within an aesthetic of the slightly battered, which exceeds in interest and value the perfect, immaculate object.

Oblique intimations abound, some biblical. The small votive object incorporated into ‘The Boy who drowned in Holy Water’ suggests that priestcraft has destroyed Christianity; while ‘Untitled (gold bible)’ incorporates the thermometer that measures illness. There are echoes here of the probematic Old testament Book of Leviticus, expressly condemning homosexuality, which Jarman would explicitly attack in his film The Garden (1990).

Jarman’s protest against the Conservative government maintains its uncompromising character in 1992, here exemplified by the pus-yellow of ‘Now we’ve all been screwed by the cabinet’. The punning reference to sexual profligacy is compounded by the inscribed words FUCK UP PUS, amplifying the unease that pervaded Jarman’s community at this time. This work is from the series known as the ‘Queer paintings’, which are painted over a background of tabloid newspapers demonizing the queer community. In this late series Jarman’s pain and protest erupt most dramatically. Jarman knew how good life could be and felt how evil the times had become. He didn’t hesitate to vilify the people he held responsible: government ministers, hateful capitalists, self-appointed public spokespeople for Christianity, the whole joyless crew.